It’s hard to believe that it is 2023.  Happy new year wherever you are.

2023 brings with it the beginning of Brenda’s and my 11th year of winters south aboard our Pandora(s).  I say “plural” as our current Pandora is the second in that line.  Now that I have cleared that up…

Let’s just say that it’s been a long time since that first winter south and our run down the ICW.    Our first stop after exiting the CT River was to visit Black Rock and and our first yacht club, Fairweather Yacht Club.

This photo of us on the dock at Fairweather as we prepared to head to NYC and south. 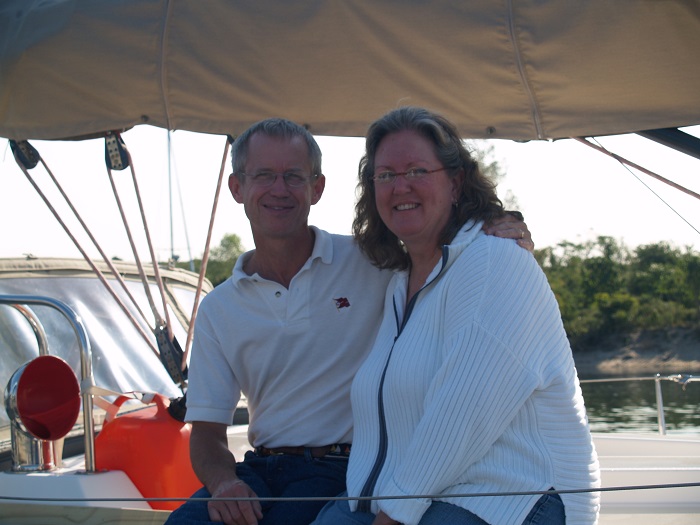 It’s amazing that this year is a full decade as a retired person.  If you haven’t tried it, being retired is easier than working, most of the time, anyway.

It’s remarkable to think about all of the places that Brenda and I have been since 2012 when we took our first run south.

I can still remember heading down the East River and having our youngest, ride his bike to across town to wave from us as we exited Hell Gate on our way down the length of Manhattan island. 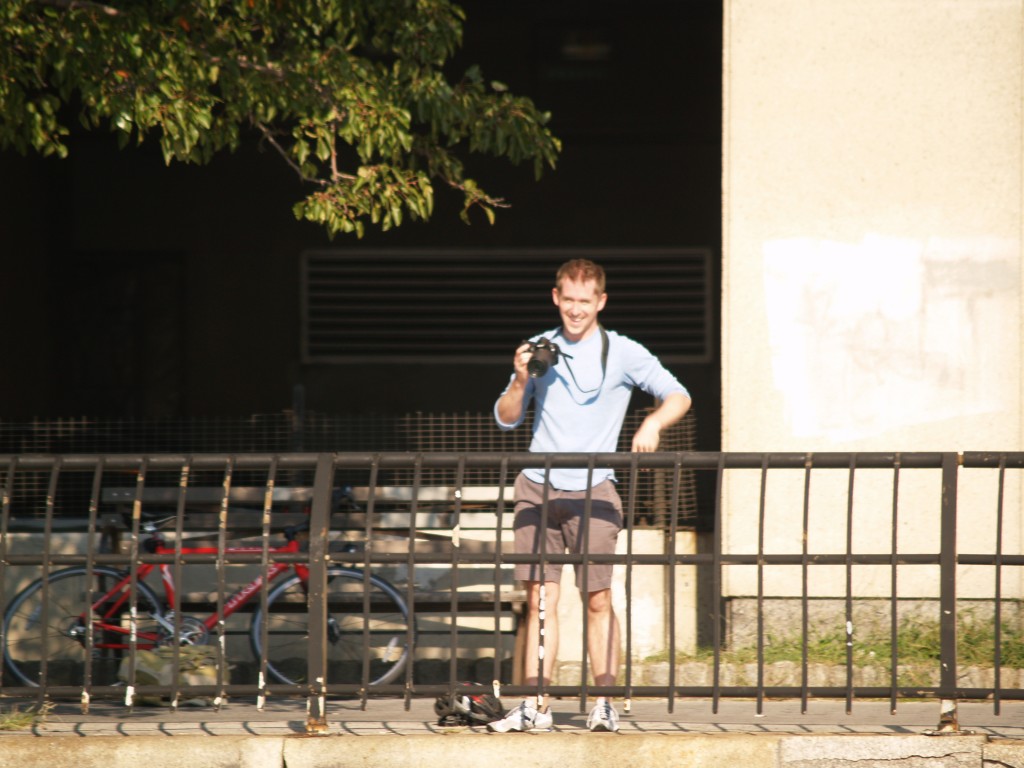 This post was about heading through NYC aboard Pandora #1.  Camera in hand, Chris took this shot of us as we headed down the East River. 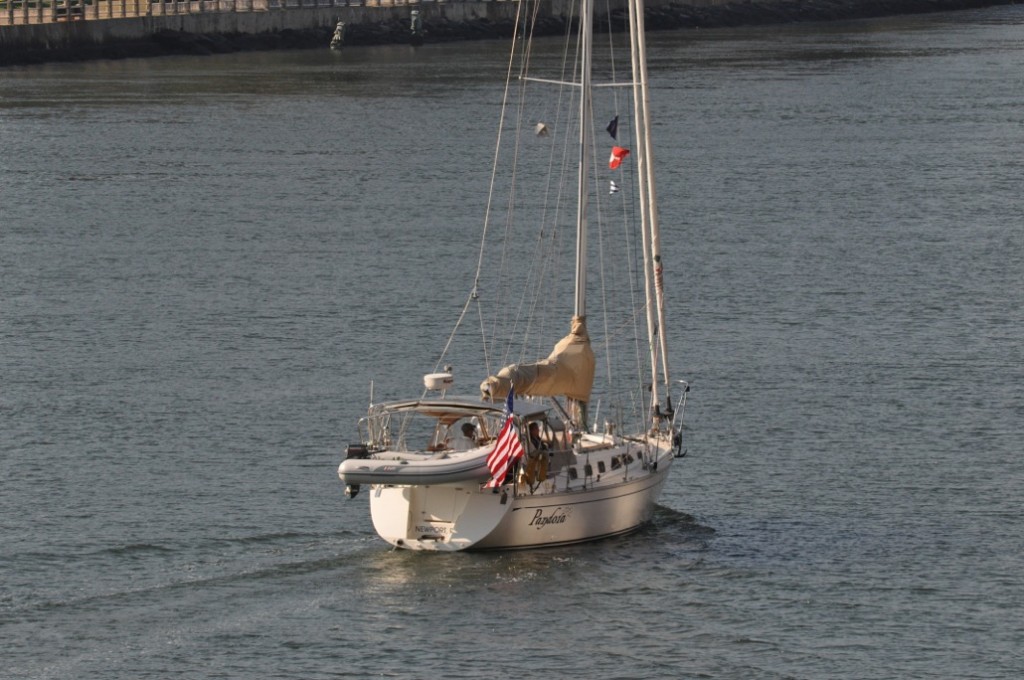 He then jumped on his bike and raced us downtown and waved us bon voyage from Battery Park.  That moment was so long ago and yet it seems like yesterday.  Christopher was at Columbia University for grad school where he would ultimately earn is PhD in Physics.  Brenda cried alligator tears as we made our way down the harbor, Christopher fading into the distance.

After finising up at Columbia he flew to CA to find his future, bunking with a friend for a few months while he began work on a tech startup.  He’s now on his third startup attempt.  He’s still in the fairly early stages of building his company, with more than a dozen employees.  It’s going well.

Even better, he’s back living in NYC again, this time with his partner Melody and their husky dawg, Mila.  After months of begging them to come east, during the early days of the pandemic, they finally agreed to move back east and stay with us.  Nearly a year and a half later living with us, the pull of NYC became too much to ignore and they moved into “the city” and are now on the Upper East Side.

It’s interesting to note that 2012 was also the first year that we spied our “new” Pandora, Arial at the time, on a mooring in Block Island.  I was immediately smitten with her and more than a few years later she was ours. 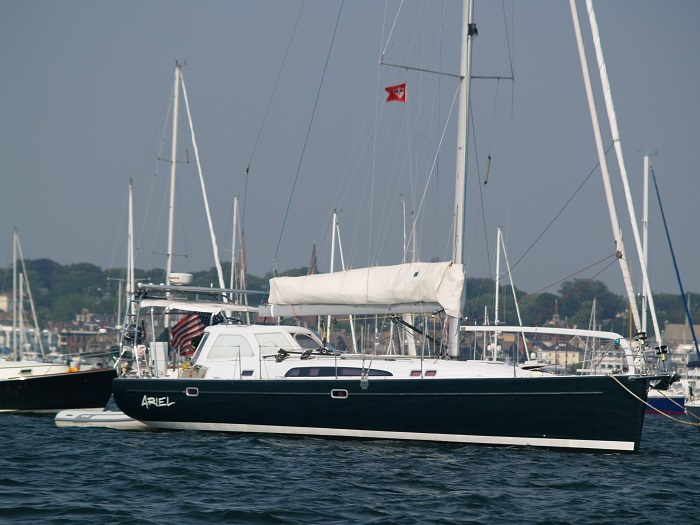 Now she’s a light grey, a lot cooler in the tropical sun.  Here she is in English Harbor, Antigua.   She’s in better shape than ever and really tricked out for long distance cruising, sitting in a place that we could not have imagined all those years ago. 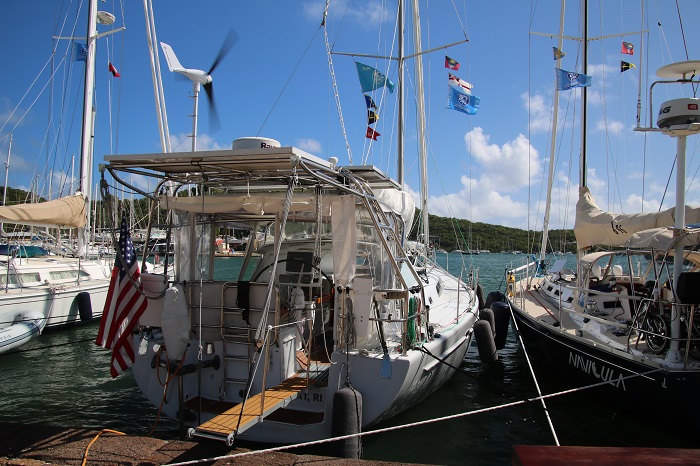 What a view from her bow, tropical breezes blowing while it’s cold and rainy up in CT.  A week ago at home  it was in the low teens, a lot different, that’s for sure. 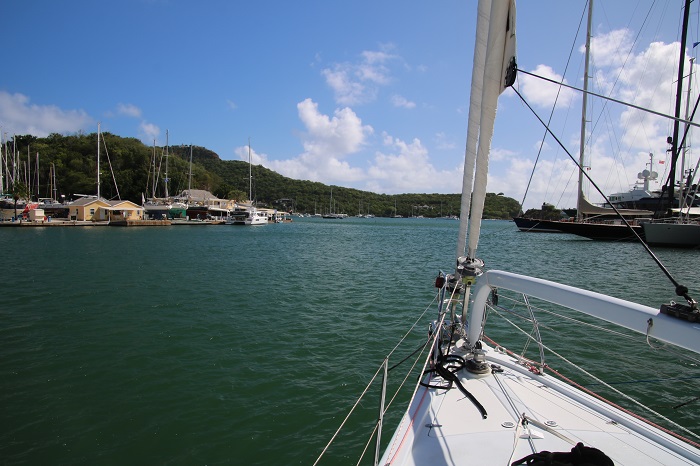 And the boats in the neighborhood are a lot bigger these days. 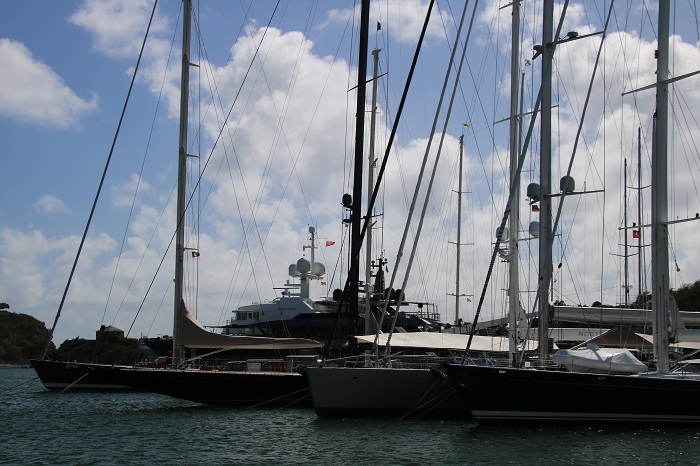 The show of wealth here in the Caribbean, especially Antigua, is remarkable.  How many outboards does it take to push your dink? 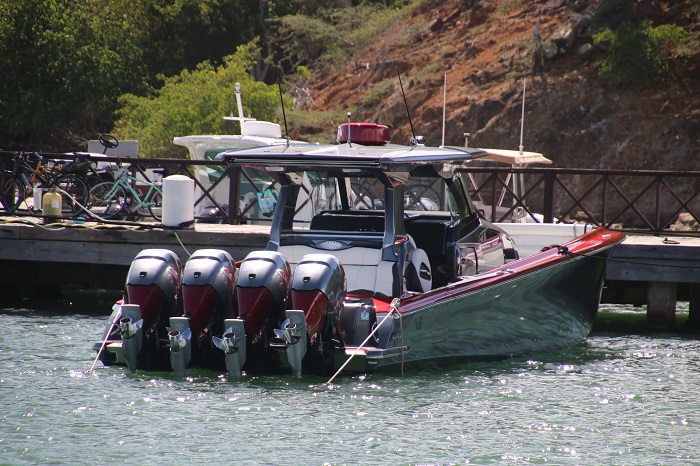 Happily we haven’t been home for too many winters since that first run to the Bahamas and during that time, our travels have taken us the entire length of the US east coast, the Bahamas, Cuba and most of the islands of the eastern Caribbean.

I still remember how awestruck we were when we first saw the unreal blue waters of the Bahamas.   Anyway, it’s been a long time and here we are in historic English Harbor.  And speaking of “here”, what a spot to sit and have a glass of wine. 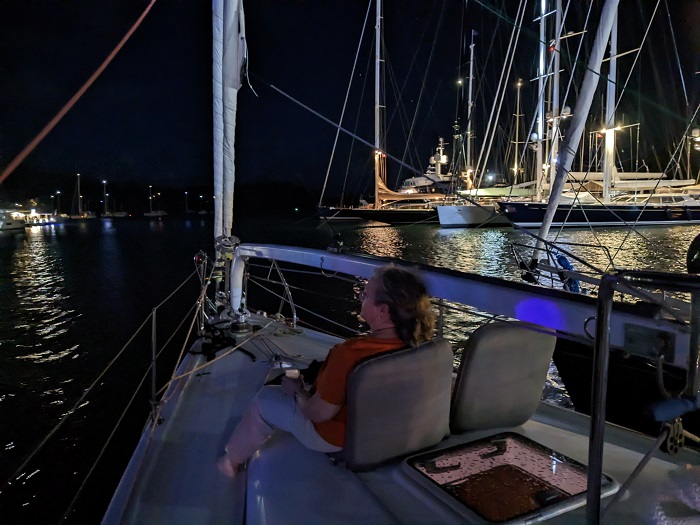 Ok, getting another glass of wine… 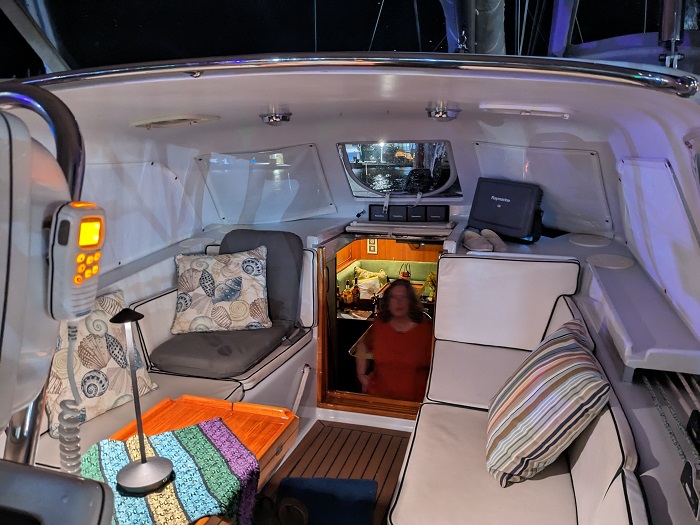 And speaking of here, you should have seen the fireworks on New Year’s Eve. 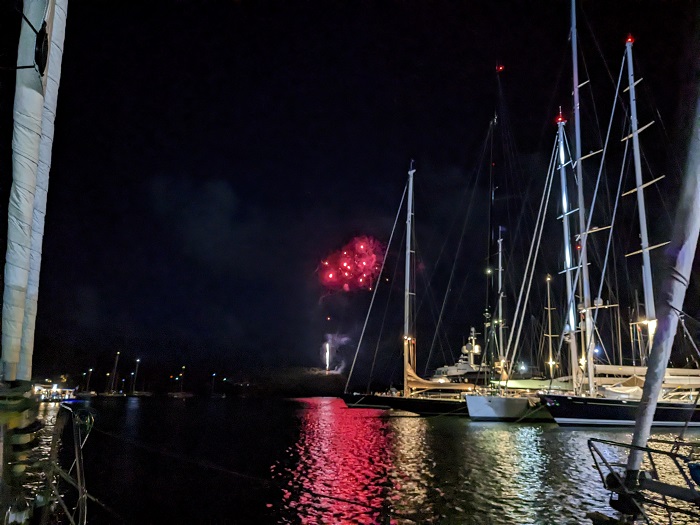 A short but remarkable display. 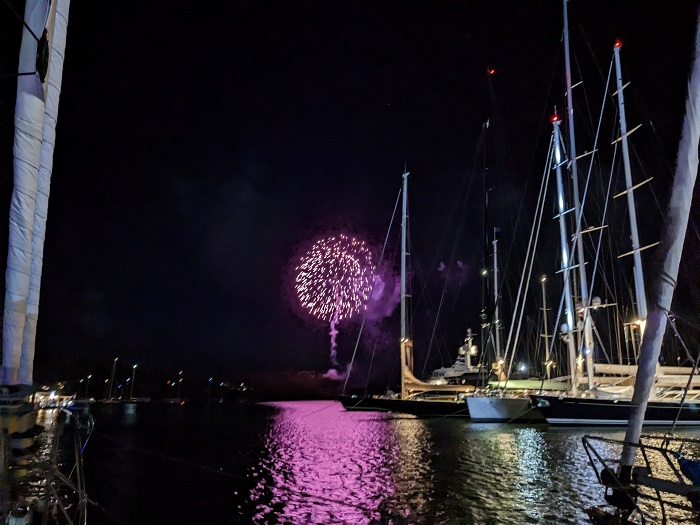 There is nothing like tropical fireworks and we actually stayed up till midnight when the show began. 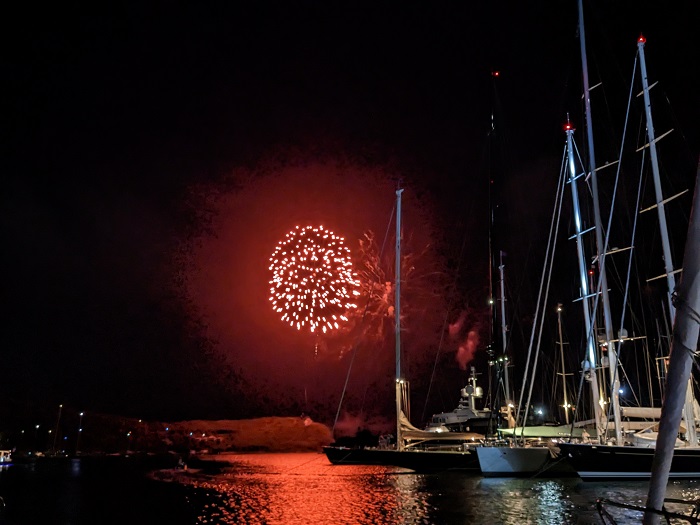 We were not alone with a big crowd in the Dockyard, thumping music and all that ran until 02:00. 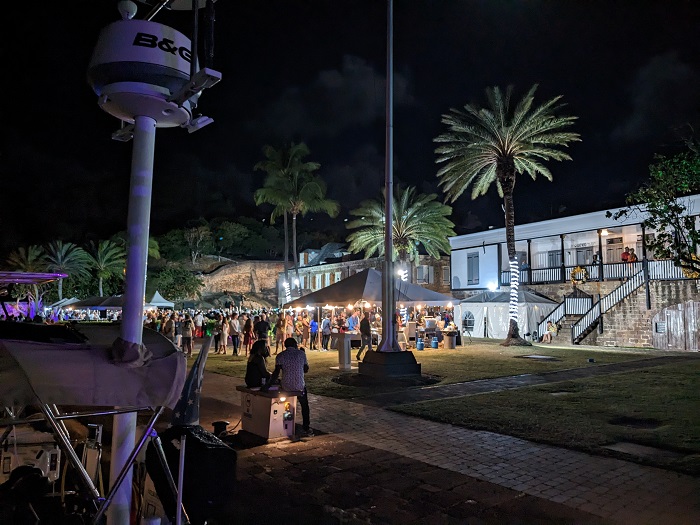 It’s hard to believe how much has changed in the last decade and to now find us wintering in Antigua,  place that I could not have even found on a map when we began heading south in 2012 is still a bit of a head spinner.

Ah, to our second decade…

One response to “The second decade.”