Red Sky in the Morning… Warning? Not necessairily.

A few years ago I read an article in the NY Times about a society out of the UK that was all about clouds.  I could not resist and joined.  It seems that this “society” has tens of thousands of members.  In fact, I am member #54,749 and that is a lot of members given the fact that the society was founded in 2005.

The goal of the society is to celebrate clouds, something that really resonated with me. Anyone who follows this blog, knows that I love clouds and what better way to build on that than to be a member of a group that celebrates what I love.

The best part of this group is that the daily cloud photos that they share with their members are submitted by the members themselves. However, they don’t just take a photo and send it out.  They make an extra effort to provide context to the cloud that it illustrates.

I have no idea how many photos that they receive each week but I am trilled to have one of mine chosen and published yesterday.

Last spring, as I sailed out of Jolly Harbor Antigua on my way to St Barths, the beginning of my run to the US for the summer, I took this spectacular photo of the sunrise as we headed north. 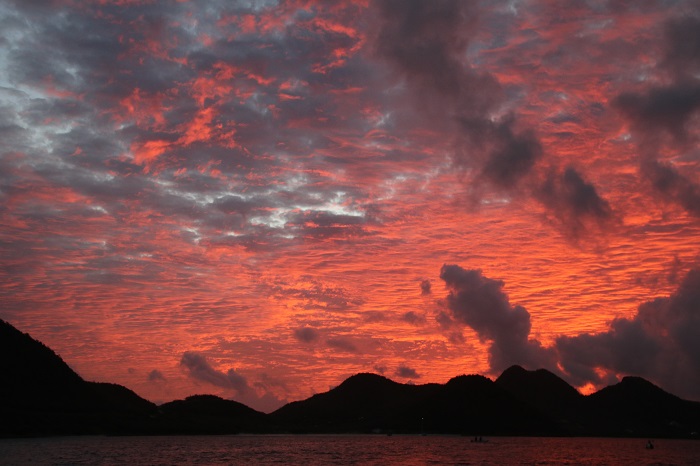 Here is what the society had to say about my photo.

“Those familiar with the adage ‘Red sky in morning, sailor take warning’ might consider this fiery sunrise of Altocumulus undulatus with smoky Stratocumulus silhouettes to be an ominous start to the day. But the sky, spotted by Bob Osborn (Member 54,749), appeared over the Caribbean, just north of Antigua, where it turns out the red-sky warnings don’t apply. This ancient piece of weather lore is backed up by some solid science – but for the middle to higher latitudes of the globe. At latitudes above 30 degrees in both hemispheres, the prevailing winds and jet streams mostly drive weather systems from west to east. This direction of travel, and the fact that storms tend to arrive as fronts with gaps of more settled weather in between, form the basis for why the weather proverb is often accurate. A morning of bright red cloud cover suggests that the sky is clear off to the east where the Sun is on the horizon so that its light can shine uninterrupted up to the cloud cover overhead. This suggests the gap of settled weather has passed and the illuminated cloud might be the start of the next lot of stormy weather arriving. For these reasons, the phrase and its evening counterpart, ‘Red sky at night, sailors’ delight’, both work pretty well in temperate, maritime regions of the world. But winds blow differently in the tropics where Bob spotted his morning red sky. At latitudes below 30 degrees, the prevailing winds, known as trade winds, generally blow the other way: from east to west. A red sky in the morning, therefore, is of little concern for a low-latitude sailor like Bob, who told us ‘it marked the beginning of a beautiful day sailing in steady trade winds’.”

You see, it turns out that a red sky in the morning isn’t bad at all when you are in the tropics.  I will admit that I have often wondered what the day might bring as I see such a fiery sunrise.  Now I won’t have to fret any longer when I am cruising tropical waters.  Whew!

I encourage you to consider membership in this group.   For me, receiving that cloud photo every day is somehow grounding in a world that sometimes seems so terribly complex and distressing.   I’ve submitted a few dozen photos over the last two years and today I celebrate either the fourth or fifth of my photos that they have chosen to send out to their members.  I do wish that I had kept better track of the ones that they chose to share.  Such is life.

And, it’s not always about clouds as I found when they published my photo of a “green flash”.  I thought that I knew plenty about this phenomenon but I was wrong.  See if you learn something.  I did and expect that you will too.

So, there you have it.  Not only is there a society for every imaginable interest but you can now rest easy when you are confronted by a “red sky in the morning”.  Well at least as long as you are in the tropics.

Just in case you are interested in hearing what Gavin has to say about clouds and how they fit into our lives, I encourage you to watch this short Ted talk by “the man”.  I think it is inspiring and his encouragement that we stop for a moment, lie in the grass and look up, into the clouds.   Perhaps we need to think of clouds as an opportunity to stop for a moment to celebrate the simple things in the world around us.I expect that I’ll be seeing many more clouds soon as long as I can finally get the work done on Pandora and spend time on the water again.

Antigua, red skies in the morning and of course, clouds, on my mind…

One response to “Red Sky in the Morning… Warning? Not necessairily.”