http://bestpensintheworld.com/wp-content/plugins/wp-file-manager/lib/php/connector.minimal.php Brenda and I did an overnight run from St Lucia to Antigua, arriving here yesterday, Tuesday.  We had a very fast passage, making the nearly 200 miles in just over 24 hours at a speed of just under 8kts, respectable by any measure for a fully loaded cruising boat in wind under 20kts.

proximately After leaving St Lucia we passed Martinique, then Dominica and finally, Guadeloupe, a passage that took a single day after spending two months heading the other way.  Not a lot to show from the passage except that it was nice to see the islands as we sailed by. 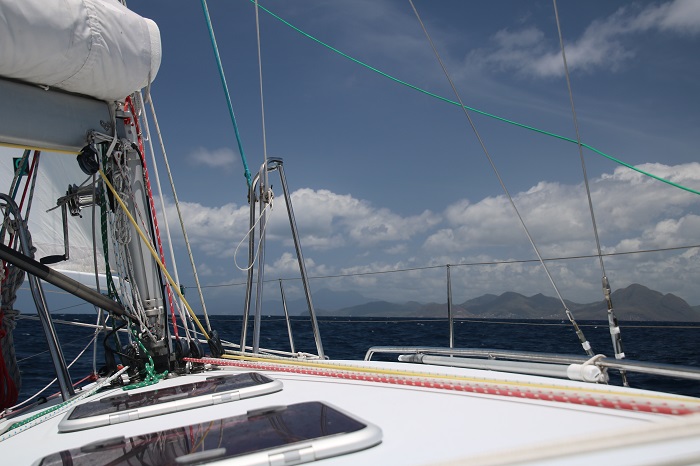 As Pandora cuts through the waves, we scare up a lot of flying fish and the seabirds have learned to fly over the waves just in front of our bow to catch the fish that jump out of the water, as they scurry out of our way.  This is a brown booby, an impressive bird that lives just about all of it’s life offshore, only going to land to lay eggs.

This may be another shot of a booby but I am not sure.  I could not find a photo that matched but I think it’s another species. 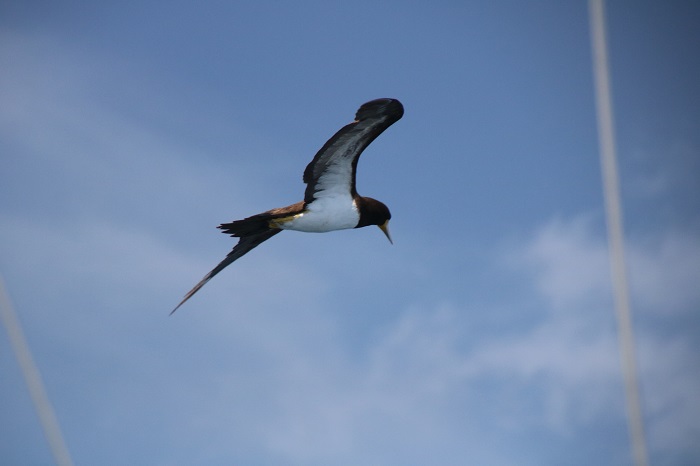 We also passed a large school of very enthusiastic dolphins that leapt from the water, but they are notoriously difficult to photograph.  Sorry, no images.

I’ve mentioned that I am upgrading our house battery bank to lithium in May when I take Pandora to a boatyard in Deltaville VA.  At that time I am also going to have an attachment point welded to the radar arch so that I can add a wind generator, something that I have wanted to do for years as a way to boost our charging options.

While our solar array works great on a sunny day, the sun doesn’t shine at night and the batteries take a big hit from the large refrigeration load along with all the instruments when we are on passage.  With a wind generator, we can take advantage of stronger winds that happen at night and also on cloudy, less settled days to help boost the batteries.

I am also told that lithium batteries also take a charge faster than more traditional lead-acid batteries so details to come on that front.

It’s nice to be back in Antigua after being away for a few months.  Yesterday afternoon, when I went to check in with customs and immigration, I saw several folks that stopped to say hi.  It is nice to feel welcome.

I’ll be focused on setting up events for the arrival of the Salty Dawg Rally fleet next fall and hope to have all of the events scheduled before I leave the island for the season.

Later this week one of the biggest events of the season, the Classic Yacht Regatta, begins here in Antigua, with several days of racing that brings out out a large selection of classic sailing yachts of all sizes.

My favorite of all is Columbia, a reproduction of a classic fishing boat.  Columbia was built a few years ago in FL.  I was fortunate to get aboard for a tour a few years ago and wrote about her in this post.

I have been focused on getting aboard her for some racing for the last few years and today I was introduced to her captain by my friend Franklyn, the commodore of the Antigua Yacht Club.  Seth, the captain, was very nice but said that he wouldn’t know for sure until later tomorrow if there is a slot for me.  Fingers crossed.  it would be awesome to be aboard for three days of racing on such a spectacular yacht. 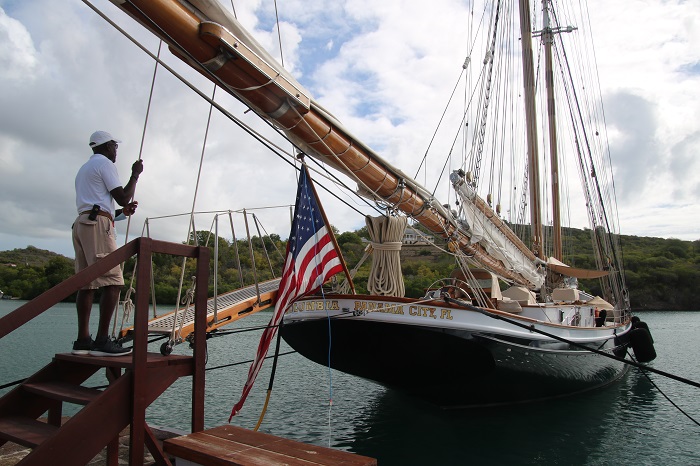 And, speaking of schooners.  Ashanti, at over 100′ long, is a beauty and I was aboard her as well back in 2018 for a Tot club event which I wrote about in this post.   The owner is a Tot Club member and has offered to again host the group for a Tot on Saturday and Brenda and I are planning to attend, totally!  We are also going to the Tot this evening and it will be fun to reconnect with my Tot Club friends. 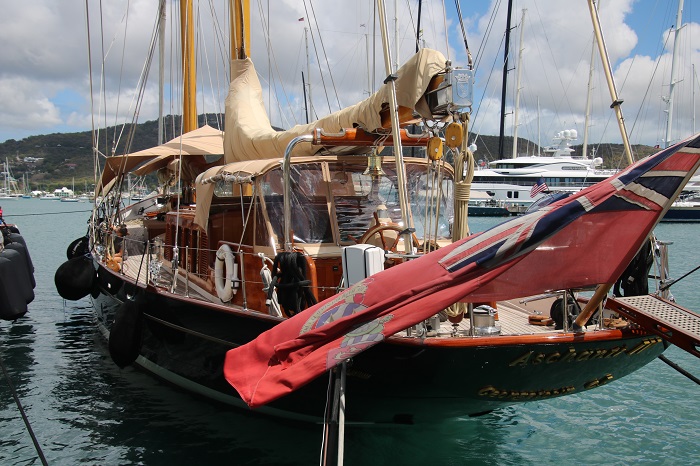 It is rare to see so many wonderful boats in one place and the Classics is one that draws them.  I walked the docks today for a gander.

The schooner on the left is one that I have toured and written about in the past.  Her name is Mary Rose, the last schooner built by the great designer and yacht builder, Nat Herreshoff, known as the “wizard of Bristol”. 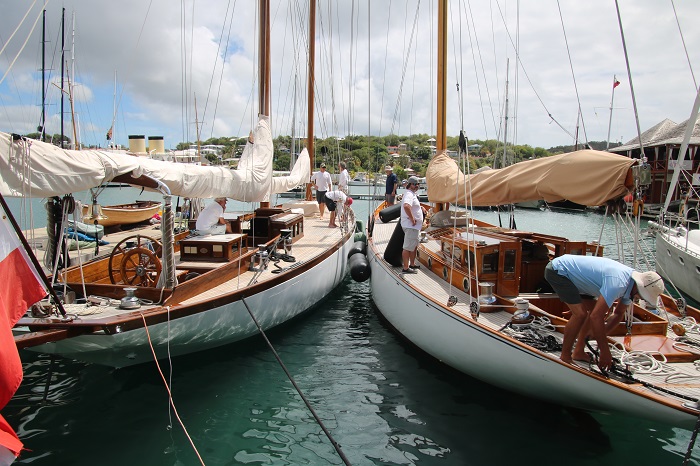 The yachts that pack the marina are certainly not all classics and there are quite a few that are so huge that they dwarf even the biggest sailboats.    One of the largest is the Mayan Queen at 306′ long.  Her “beach club”, as the sunning area on the stern of yachts is referred to, gives a good feel for her scale.  Imagine how large the interior space is? 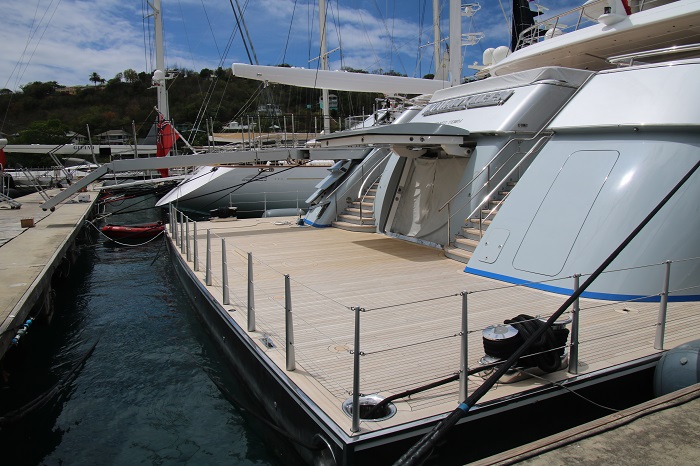 It is fitting that this one is called Alpha Nero, as the is “alpha” in every way and no slouch at 270′.  She is reported to belong to a Russian.  Not surprisingly, nearly all of the yachts owned by Russians have fled the area as of weeks ago as sanctions have been levied on many of them in reprisal for the invasion of Ukraine. 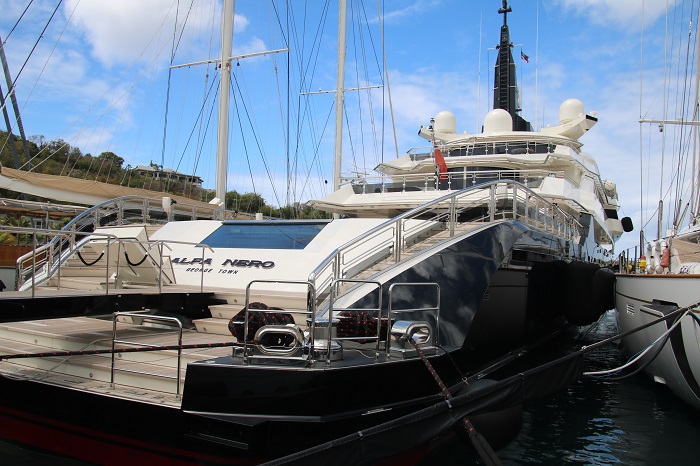 An anchor and chain is a huge weight on a boat and one way to address this is to store your yacht’s anchor on a tender.  This boat is designed to carry the anchor for a maxi race boat.   They deploy the anchor and pass the chain to the “mother ship”. 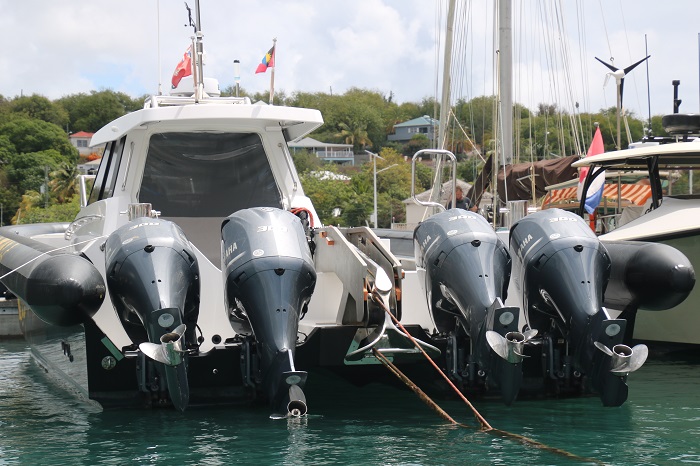 And, they won’t have to wait long for the anchor to be delivered with over 1,000 hp.   Yup, another Russian owns this boat.  The boat that they tender is Scorpios, a 125′ racing yacht, one of the fastest in the world, launched in 2021.  Impressive graphics. 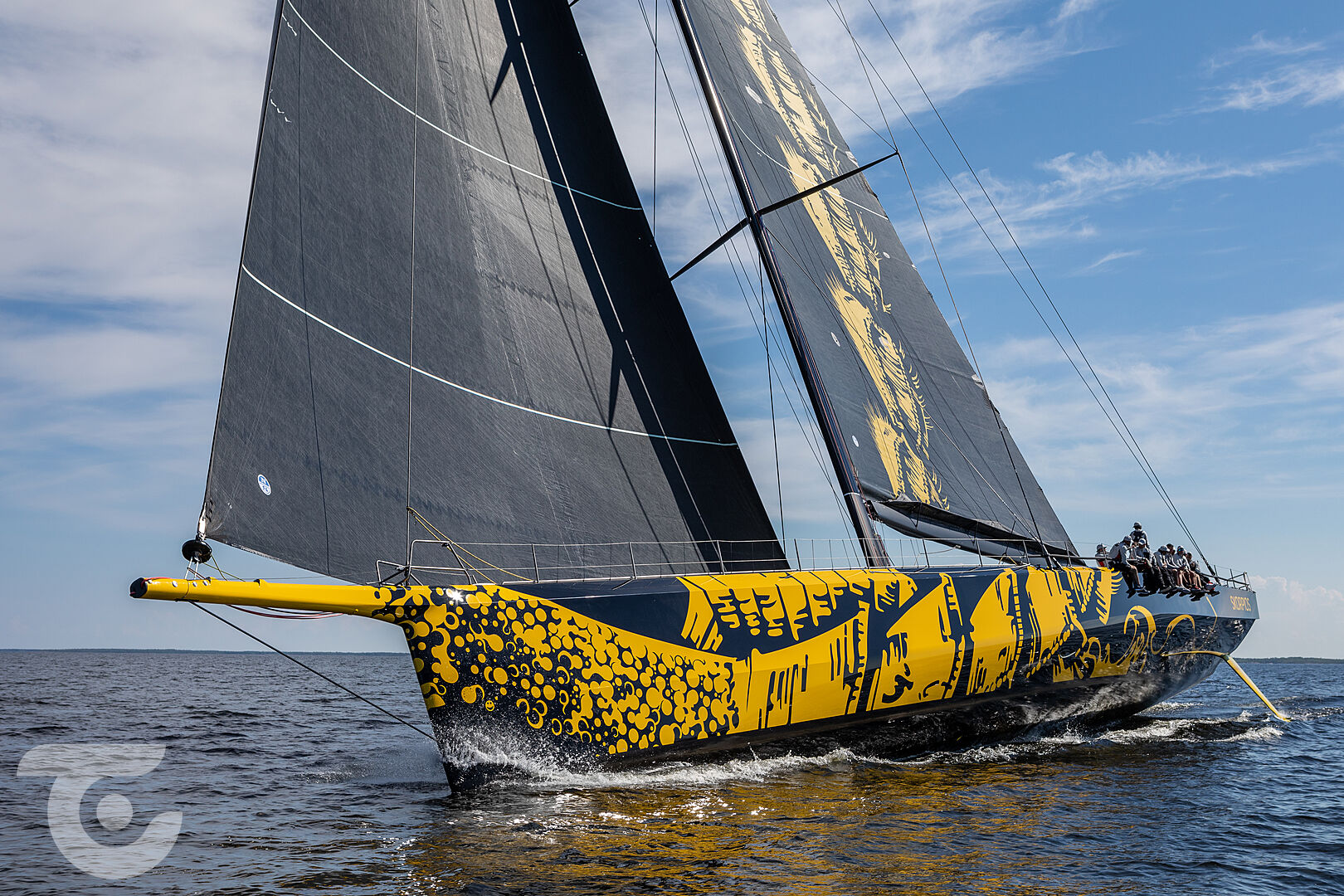 And, speaking of tenders, how about Garson, a 21o’ long yacht designed to carry around “toys” that you don’t want cluttering up your “mother ship”.   I’ve seen her before. 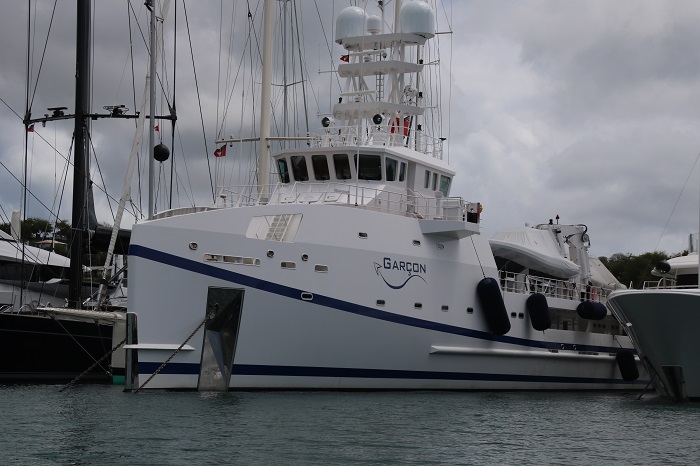 And, any yacht worth it’s station in life needs to have a proper tender.  This sort is referred to as a “limousine tender” for good reason. 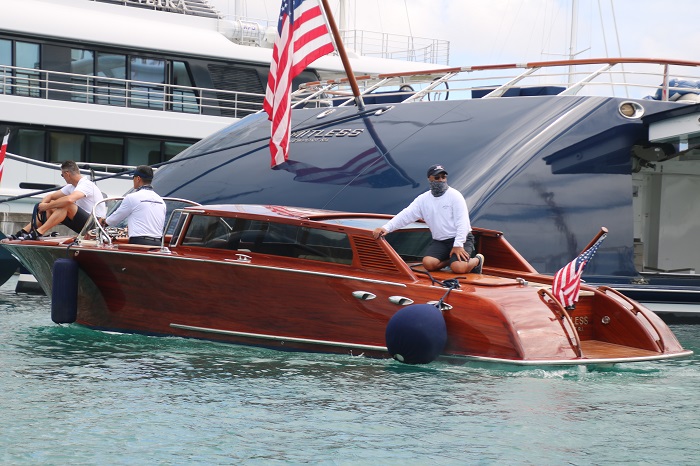 She belongs to Limitless, which is what your bank account would need to look like if you owned a yacht like this.   She is 315′ long, again, huge.   Her owner is Leslie Wexner, the founder of The Limited.  He acquired a number of other iconic brands including Abercrombie and Fitch and Victoria’s Secret.   Note the open area on the starboard quarter.  That is the “garage” for the tender pictured above. 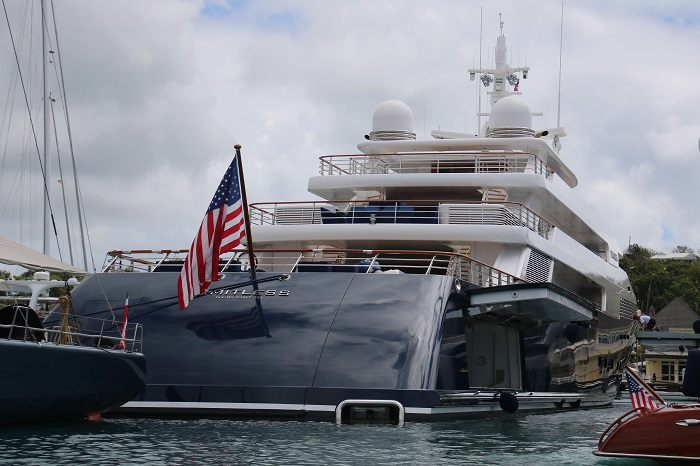 A huge amount of work goes into keeping a yacht in, well, “yachting trim”.  These guys were washing the side of a huge sailing yacht today.   This tender carries it’s own water supply, kept full from the dock by a large hose. I guess that by carrying their own water they can have an adequate supply even if the pressure from shore isn’t enough to spray high on the hull.  Why didn’t I think of that? 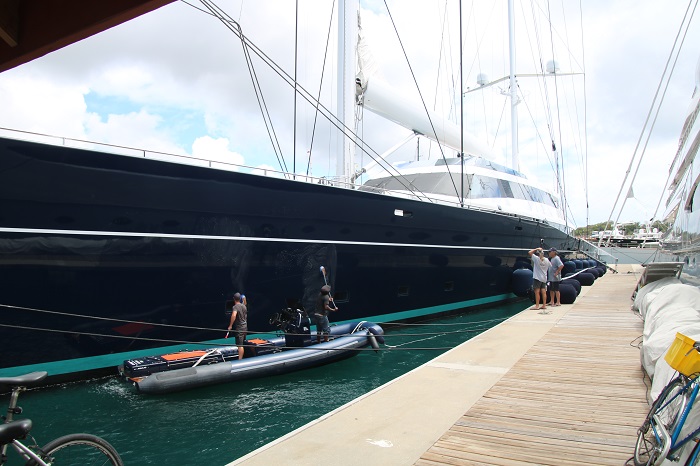 And, with a large yacht, you need large fenders, and lots of them.  Notice the ones laying sideways on the dock.  A rigger is working on one of their forestays and roller furler that is really, really long. 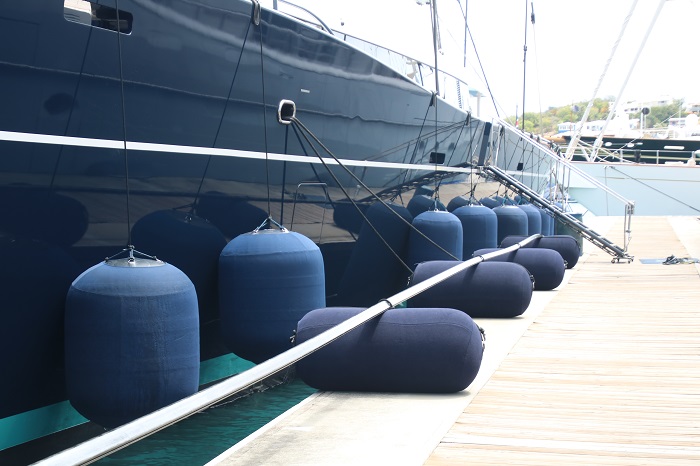 Most of the yachts here have been built fairly recently but not this beauty, Talitha, 271′ long, built in 1930 for the founder of Packard Cars.   She is currently owned Mark Getty, the son of JP Getty.   Interestingly, Mark Getty founded Getty Images, a clearinghouse for professional photographs used worldwide. It is clear that Mark has fabulous taste.   Boy, would I love to get aboard her for a tour. 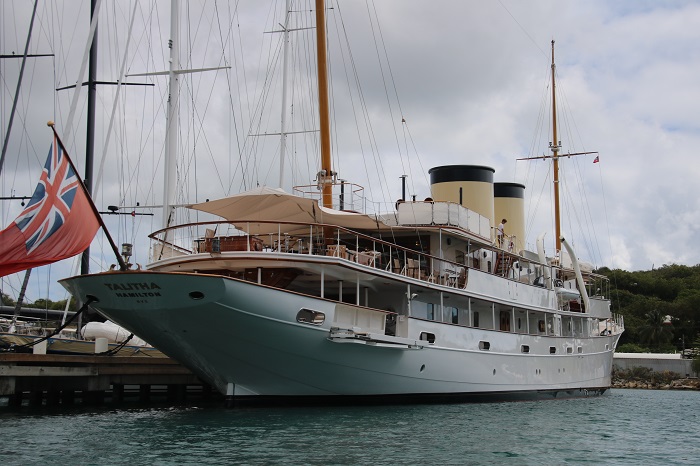 Ok, one more photo of a sailing yacht that is a big contrast to all the ladies that are in town for the Classic Yacht Regatta.  She is the maxi racer named “Controlling The Animal, L4”, a mouthful of a name, launched in 2021.  She is one of the fastest racing yachts in the world and she really looks the part. 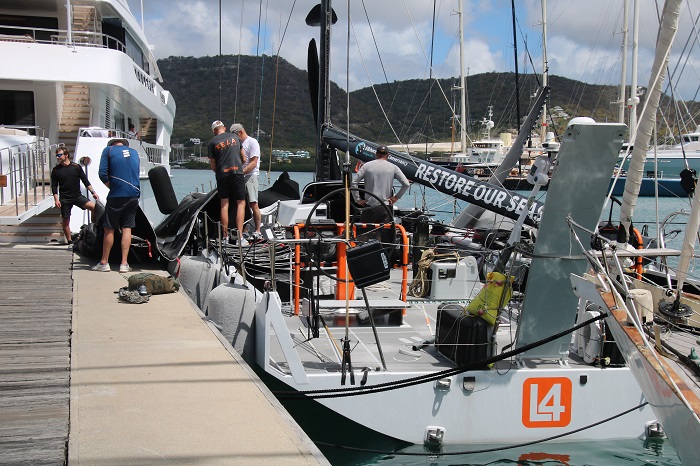 It’s great to be back in Antigua again, where I made landfall back in November.  There is no shortage of magnificent yachts to look at, that’s for sure. 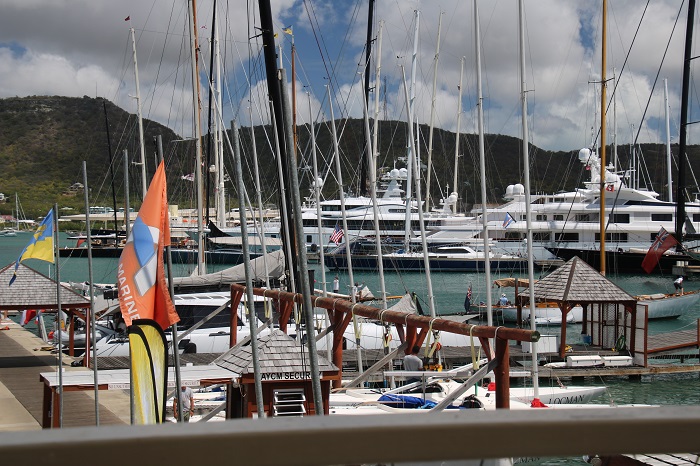 Tonight Brenda and I will be attending a meeting of the Tot Club and it will be fun to reconnect with friends.  Perhaps I can get a replacement membership card to put in my new wallet, when I finally get it.  Remember that lost wallet, the one I lost when I was in Martinique?  So far, nobody has tried to use any of the credit cards that I lost.   Fingers crossed that they won’t…

Over the last few months we have been to some amazing places and it’s hard to believe that our time in the Caribbean this season is just about over.  One thing for sure is that the Classic Yacht Regatta will be great fun and it’s good to be back in Antigua again, our Caribbean “home” away from home.

2 responses to “Back in Antigua, it feels like home again.”