When we first visited Les Saintes a number of years ago, Brenda’s reaction, when she saw the brightly painted homes with red roofs, was “this is the prettiest place I have ever seen”.   And, like the other French islands we have visited, the food is great too.  Beautiful scenery and great food.  That was on our first year cruising the Caribbean and we still feel that way, years later.

We are on a mooring very close to an active ferry dock.  Hundreds of tourists, mostly from France, arrive daily from the big island of Guadeloupe, overnight bags in tow.   It makes for a rolly harbor during the day.  Not great, I’ll admit. Off to the north is the big island of Guadeloupe and the view is pretty spectacular in the late afternoon. 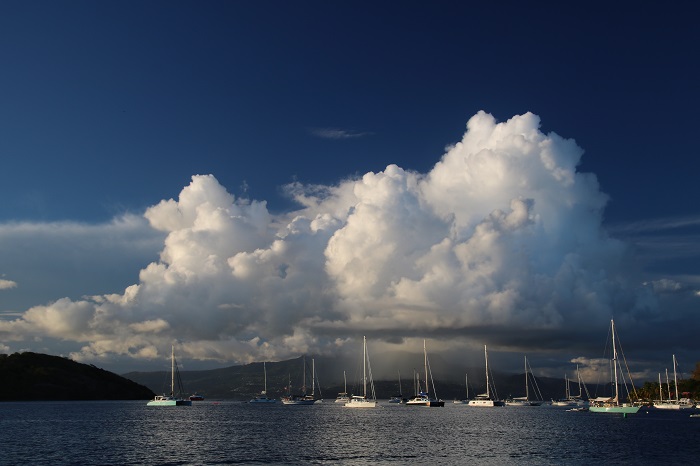 This morning I was greeted by a partial rainbow.  It was very windy overnight with a series of strong squalls moving over the island. The first thing that comes to mind when I arrive here is that it looks like a seaside village in the Mediterranean, well at least what I imagine that would look like, as I have limited experience with such places.  Having said that, it feels quite French.  Last night Brenda and I went out to a favorite restaurant.  She had duck breast and I had octopus.  They were both quite good followed by crème brulee.  Yum. 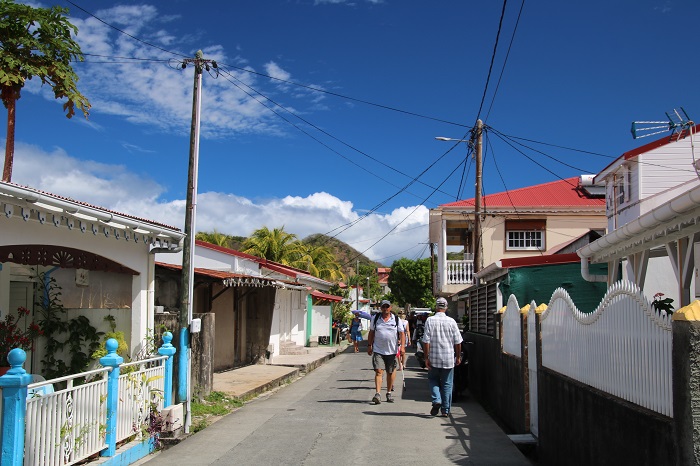 This archipelago of islands is only about 20 miles from Pointe de Pietre and yet has a very different feel.  As lush as Guadeloupe is, this island is very arid, more so than most of the others in the area.  The islands are just not tall enough to wring out much rain from the trades.

I am struck by the color of the water. We’ve been here for a few days already and aren’t sure if we will leave soon for Martinique, about 70 miles from here, or wait until the next weather window, perhaps by next weekend.

Unlike other areas that we visit, here we take a mooring as the area near the town is quite deep and unless you are willing to anchor far out, it’s really the only option.  They seem to be well maintained and even though the water is nearly 40′ deep, you can clearly see the bottom.

The islands, and there are a number of them, ring a large harbor or bay, that is fairly well protected from the ocean swells.    This are is controlled by France and back in the day, when they were duking it out with the English, each nearby hilltop had a fort or lookout.  Yesterday a number of cruisers hiked to the top of one of the highest peaks.  You can see the tiny fort on top of the hill in the distance. 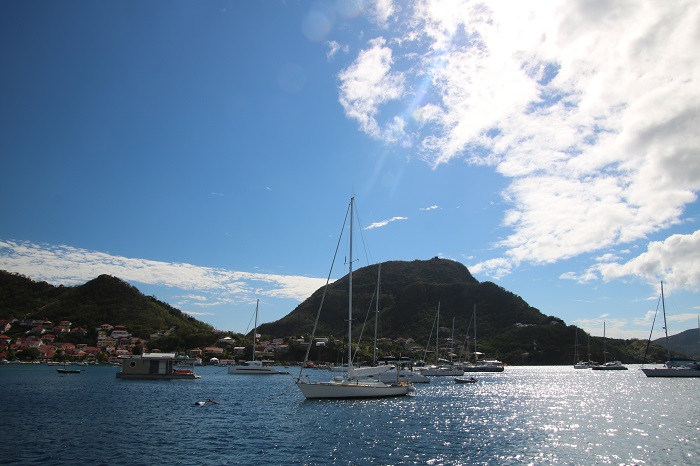 The group hiked up a well paved road that got steeper and steeper as we gained elevation.   The view of the harbor below was amazing. If you zoom in Pandora is in the middle of the harbor. 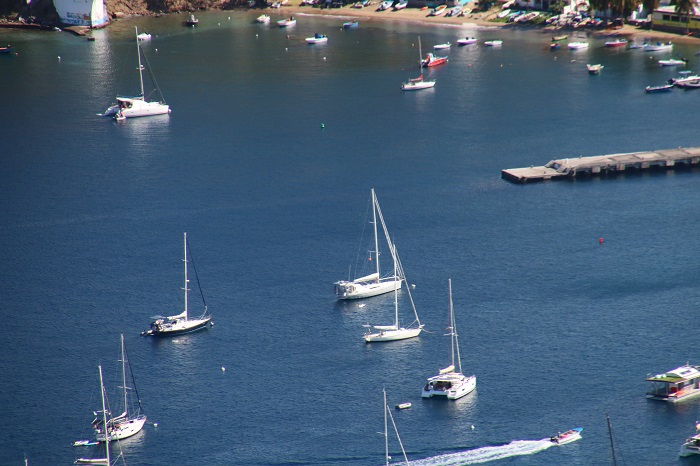 Off to the right of the harbor are many local colorful fishing boats.  The light blue along the edge is shallow water.  It’s very clear water. On the eastern or windward side of the island, not so placid, with waves crashing on the rocky shore. 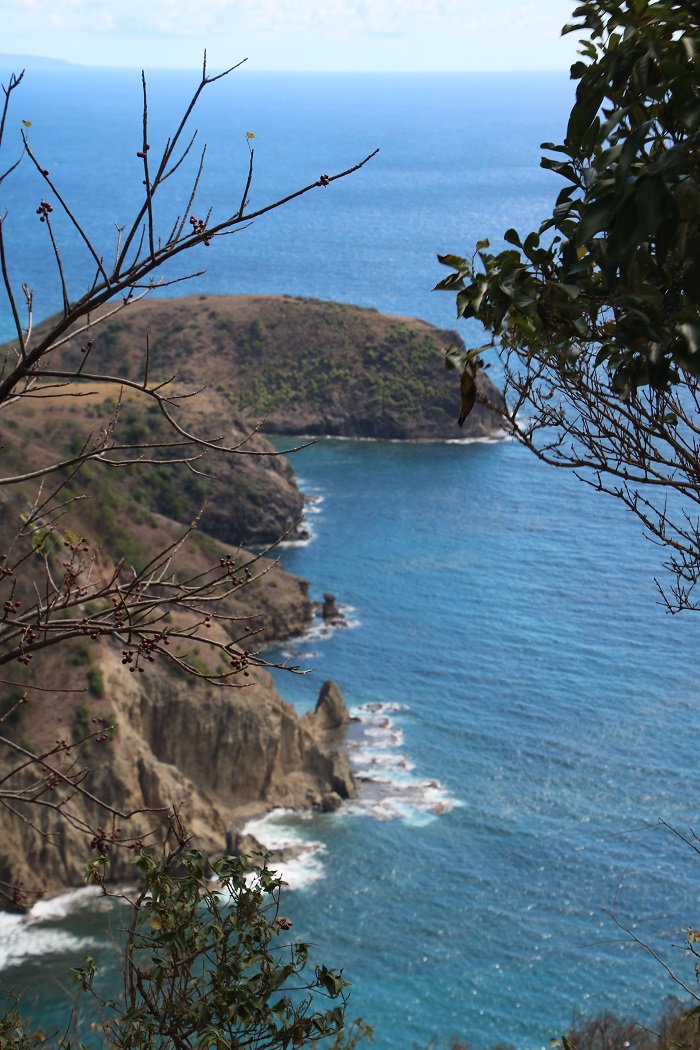 Zoom in and you can see the beautiful textures in the rocks and foam of crashing waves. 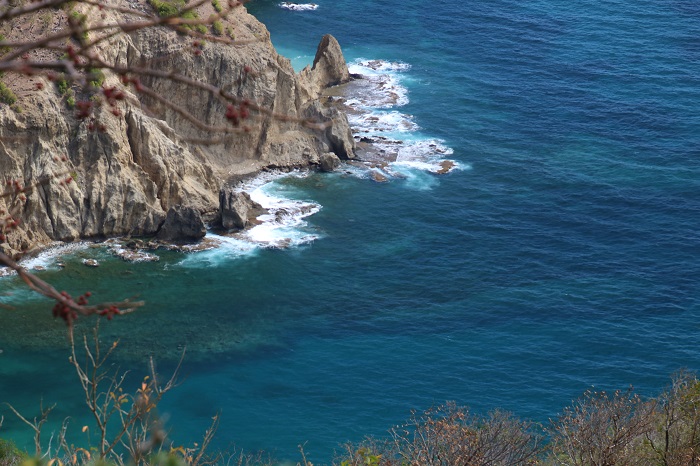 Our friend Mark, from Roxy, takes pictures with his iPad and I could not resist getting a photo of him concentrating on the perfect shot. 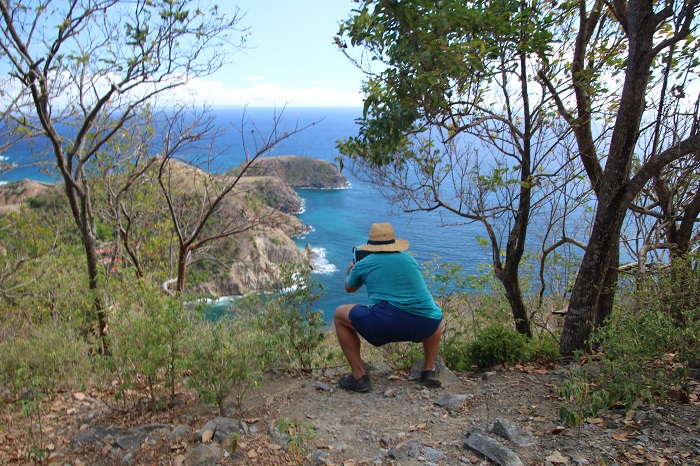 While I was looking at the local color, they were busy watching me.  Goats are a scourge on most islands, eating everything in sight.  As a result, many native plants can never gain a foothold so much of the island is defoliated. So, here we are in a charming harbor, unsure about what’s next.  But hey, what’s the rush?

Perhaps I’ll go ashore for a baguette.  Brenda had some leftover from her dinner last night so lunch will be duckbreast and cheese on a baguette.  Double yum.

One response to “Les Saintes. Yum.”