Trinidad for the summer. Cruising with friends for the winter.

As I made my way south to Antigua back in early November, I realized that I really didn’t want to make the run north this spring, only to turn around a few months later to make the return run again next fall.

The fact is that we really don’t use the boat all that much during the summer so sailing more than 3,500 miles round trip, just to let the boat sit for months, doesn’t make much sense.  And, frankly, when I get back in the spring, I am ready for a break.   Additionally, we have big plans for the house this summer, we are having the kitchen remodeled and I’m redoing the third and final bathroom that I will have done personally since we moved there a decade ago.  That’s a big job so not having the distraction of Pandora will surely help.  We are also planning some traveling which won’t leave a lot of time for using Pandora.

When I first became involved with Salty Dawg, the group that does the rally, I wondered of the boats that make the run, how many do it year after year and how many just opt to leave the boat in the south for the winter, avoiding thousands of miles of ocean passages every year.   For many, I have learned, it’s a one way trip until they are finished cruising the area and head home, sometimes years later.

So after asking for advice from friends and speaking with a key vendor in Trinidad, the plan is to leave it south and see how it goes.  That’s a big change for us and we will have to see how it goes.   The advantage, beyond the wear and tear on me and Pandora is that there are excellent services in Trinidad so just about anything that I need to have done can be handled there.

This year, the list is long, including painting the decks and now fixing some really nasty scratches that someone put on the boat a few days ago.  I can’t prove it but suspect it was some kids on a small catamaran from a local sailing school.  There are a lot of them sailing around the harbor and it really looks like one of them smashed into the boat, not once but three times.

I wasn’t aboard but the fact that there is a small sneaker print on the hull certainly suggests that a kid pushed off with a salty shoe as they bumped down the hull.

I spoke to the director of the school and he came out to the boat only to say that because I didn’t see it happen…  Additionally, he says that he spoke with the instructors and they did not witness anyone running into Pandora.

I guess I am on my own.  Add that to the list for Trinidad.  Good thing that the company I chose to oversee all of the work is called “Perfect Finish” as I am going to need it.  Another year, another perfect finish.   Well, at least until another small boat crashes into Pandora again.   Another season, a few more boat dollars…

Setting aside the fact that just about every season someone in a small boat bumps into and scratches Pandora,  we have been visiting some really wonderful spots over the last few weeks since leaving Antigua.

As we moved down the coast of Guadeloupe, on our way to Pointe de Pietre, where we are now, we stopped at Pigeon Island, a Jacques Cousteau marine sanctuary.  It’s quite charming and is in the lee of the tallest mountains on the island.  The mountains are topped with clouds all the time. 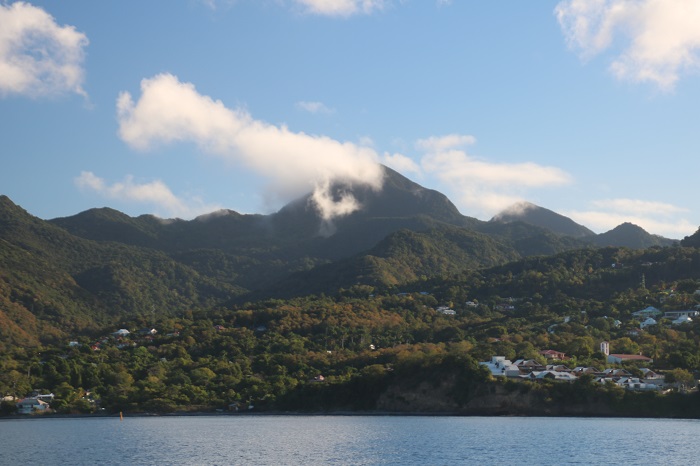 As a result, there is a constant parade of rain showers, carried by the easterly trade winds.   As the winds move up the eastern side of the island, the steep rise in elevation cools the air, the dewpoint drops and it rains and the showers are carried over onto the western side of the island.  The rain is very light but perfect for forming rainbows all day. 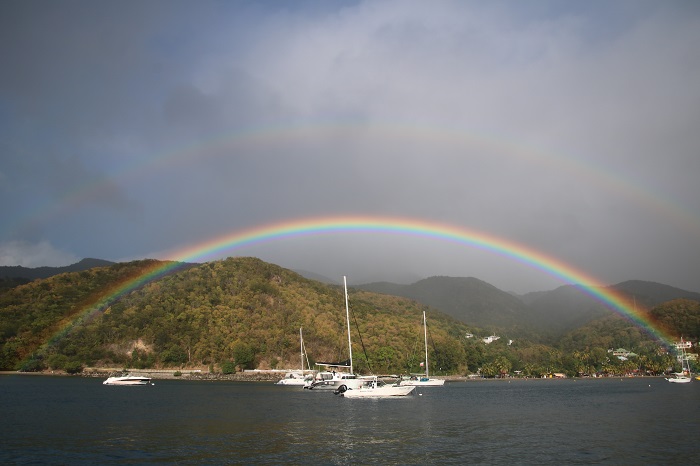 As we moved down the coast, early the next morning, on our way to Pointe de Pietre, the water was glass calm in the lee of the island, with a row of clouds marching into the distance.  The moment reminded me of a little steam train chugging it’s way over the horizon. 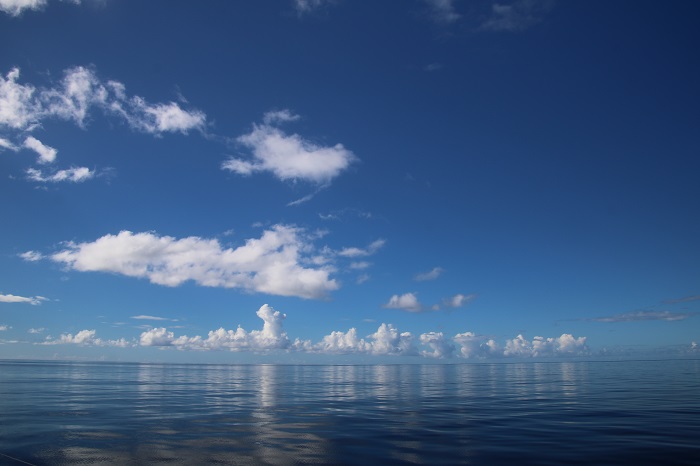 Pointe de Pietre is the largest city in Guadeloupe and while it is a popular stopping point for cruisers, the water isn’t all that clear as it is a very industrial harbor.

Yesterday a group of us decided to rent cars and head into the mountains to visit a popular waterfall.   The roads on the island are very well maintained, generally two lane divided highways but take an exit and you are soon on narrow winding roads. 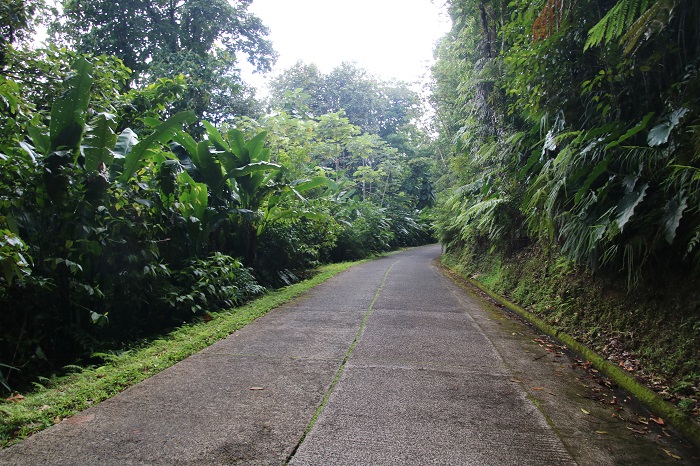 As you climb higher and higher up the mountainside, the going gets a lot steeper and much of the time it’s first gear all the way.   As you get higher up, the roads are barely wide enough for one subcompact car and the switchback turns are sometimes a 45 degree pitch and the car can barely keep going, even in the lowest gear.

It’s wonderful to watch the vegetation change as you climb higher and higher, becoming more lush as the kilometers roll by.

Once you are perhaps 2,000′ above sea-level, the air is noticeably cooler and huge tree ferns are everywhere. 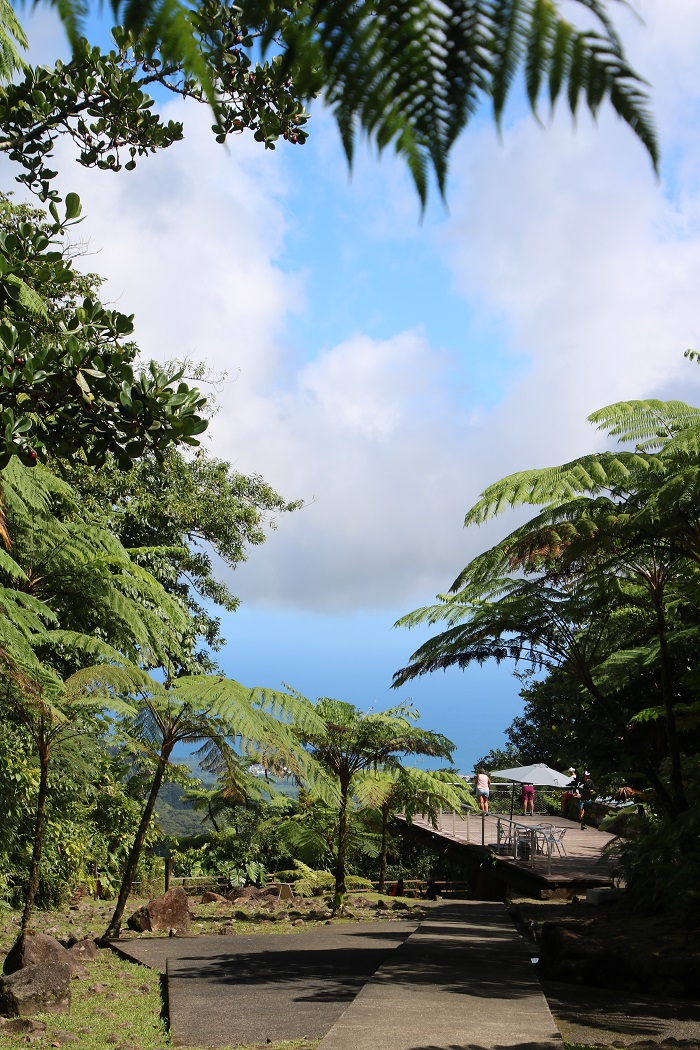 The near constant rain means that there are rivers and streams flowing in every valley. 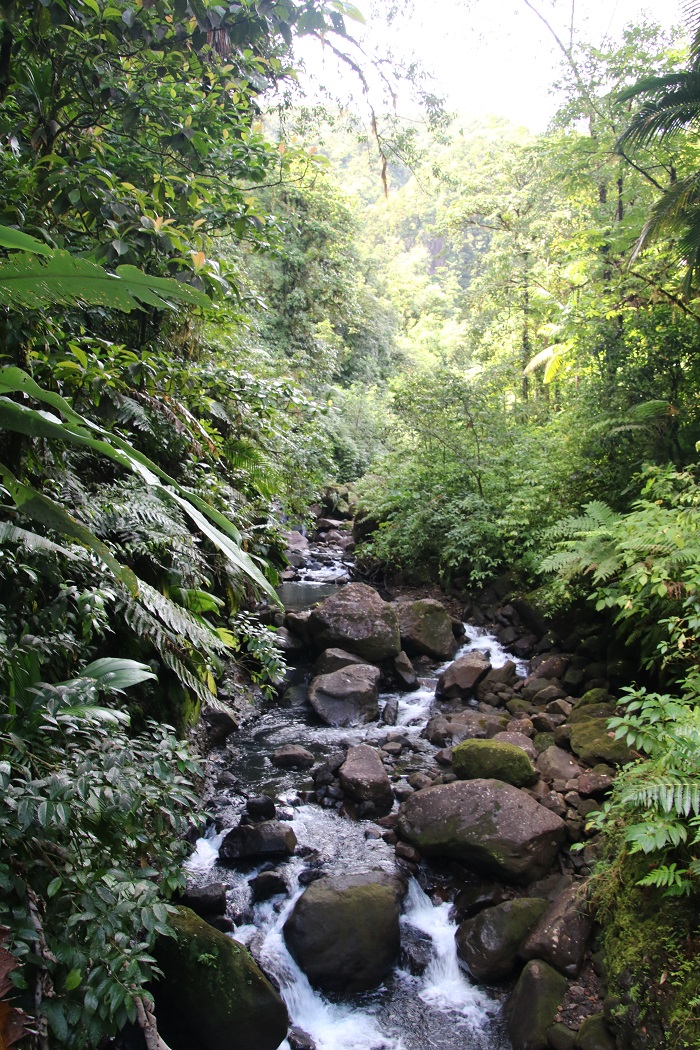 This particular park has the tallest waterfall on the island, a series of three falls with a total elevation of over 1,000′.  It’s so tall you can see it from the ocean as you pass by.   This shot is from the entrance to the park, an overlook that shows the two largest cascades on the island, perhaps in the eastern Caribbean. 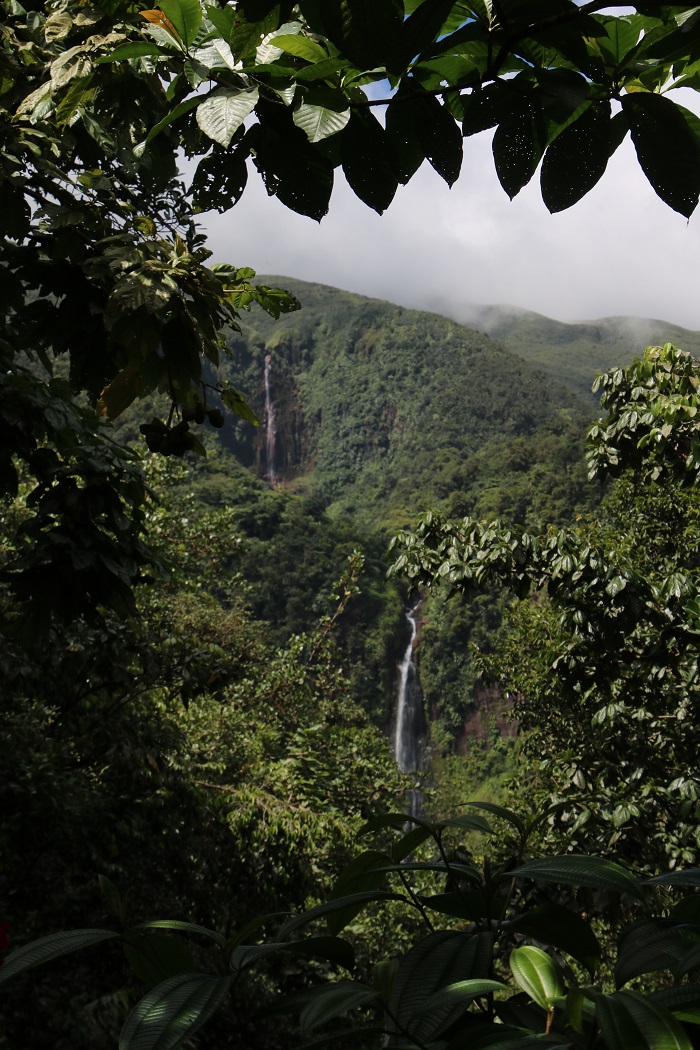 The walk to a spot where you can view the falls closer takes about an hour as a well maintained walkway meanders through the rainforest.   There are a lot of steps, up and down both ways.   Some are wood and others carved out of the rocks. 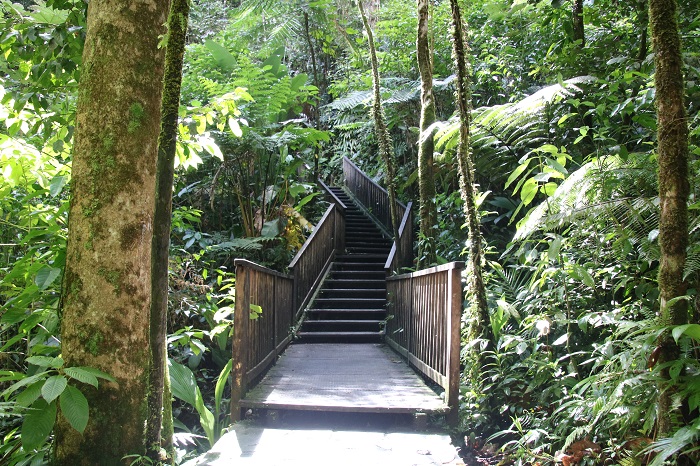 There is water dripping everywhere and all surfaces are completely covered with plants, small and large, competing to grow.    Some are tiny mosses on wet walls. 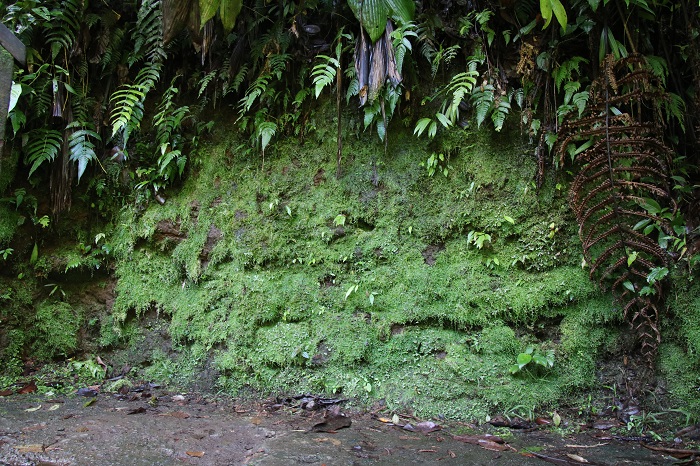 Others, tiny ferns growing from every crack and crevice. Everywhere you look, mossy green. 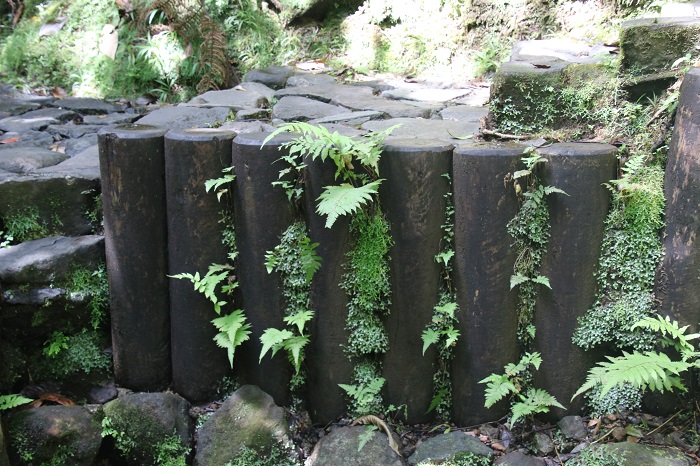 A riot of green everywhere. 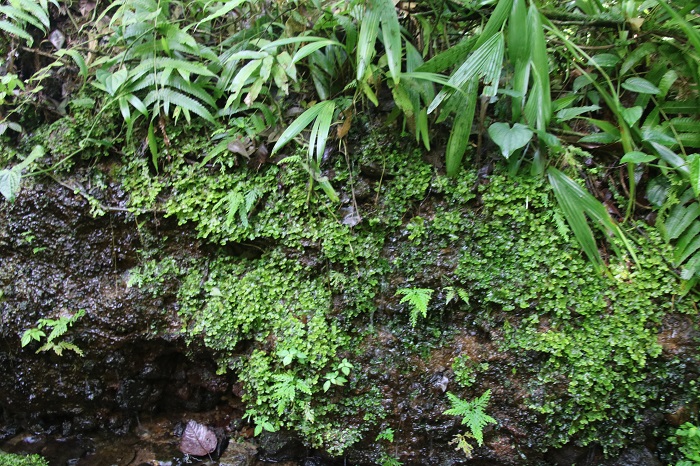 There are certainly orchids in the upper story of the huge trees but most are not in bloom this time of year.   I did spy some delicate orchids, not currently flowering affixed to branches in the clearings, where sun could penetrate.  In the dense forest, there isn’t enough light near the ground for most orchids to grow properly. 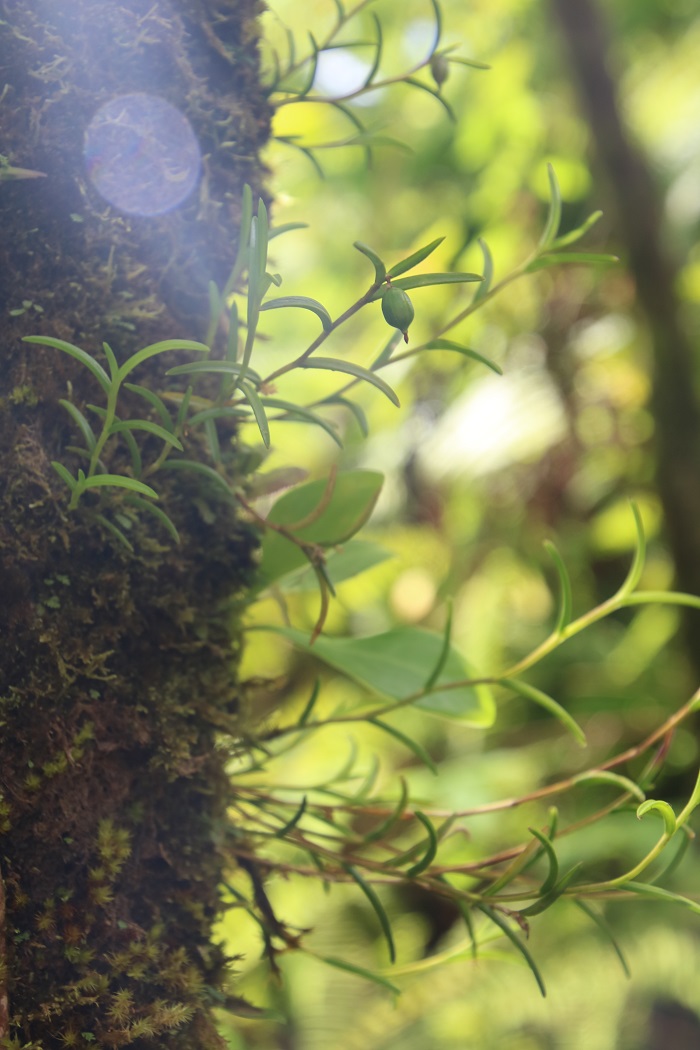 There were a few orchids in bloom like this delicate bletilla. 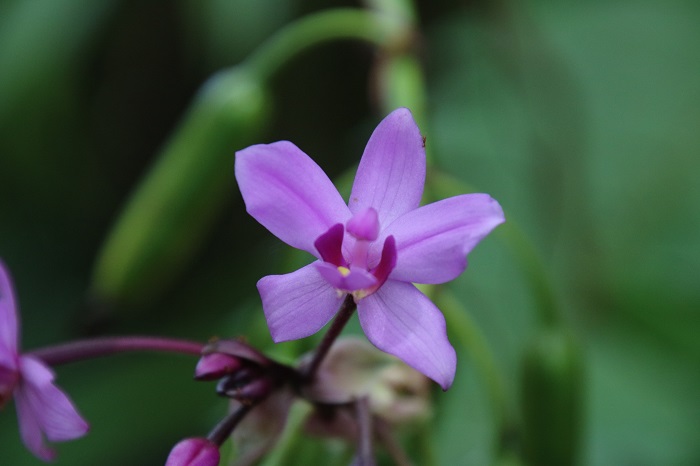 Along the way there are a number of overlooks.  Brenda and our friend Lynn were enjoying the view, while taking a rest. 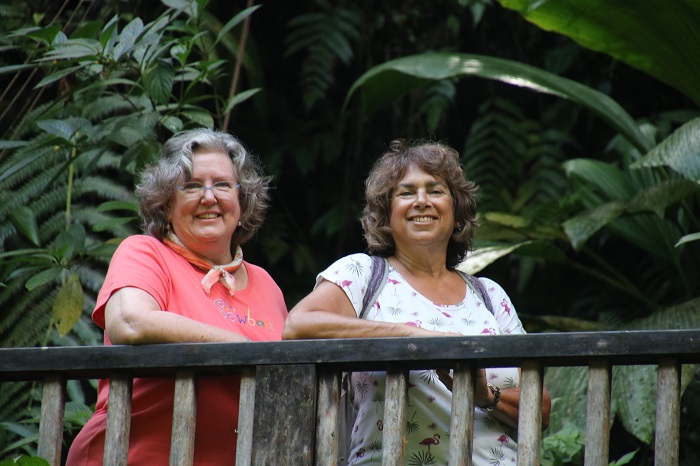 This day we had rented three cars and traveled together for much of the day.  We only got lost once or twice… 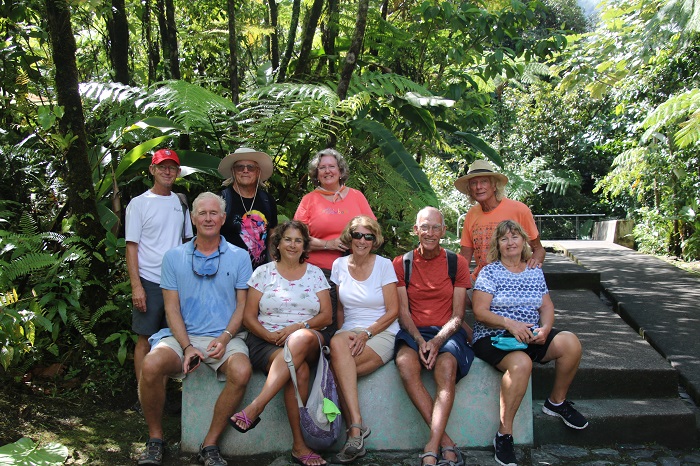 After our walk in the rainforest, we stopped at a lovely spot for lunch and after that, a distillery where we were treated to a number of tastings.   It’s hard to say if it was the rum or the presenter that was the most entertaining.  She was quite a character and after listening to her share thoughts about each rum in her wonderful French accent, none of us left empty handed. 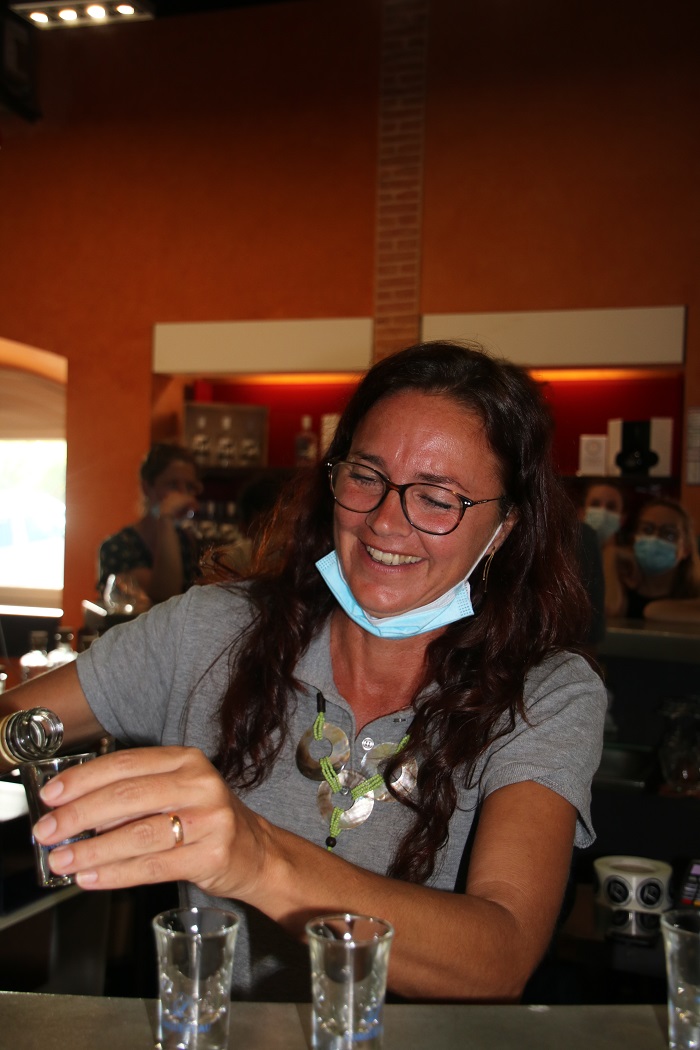 It was a long day, nearly 12  hours, and the driving up in the mountains, with it’s twists and turns was tiring.   However, it was a great way to spend the day and it sure beats snow.

Guess what?  Snow at home AGAIN.  Better them than me.

So, Trinidad this summer?  That’s the plan.  For now, cruising with friends, especially in the French islands, perfect!

At least that makes the newest scratches in Pandora more bearable.