If you have to ask, you can’t afford it.

It’s Friday and we have been back in Antigua for a week.  I am finally, nearly, almost, mostly over the particularly nasty cold, compliments of our grandchildren that I have suffered from for over two weeks and now Brenda has the scourge.

Her cough sounds terrible and I am hopeful that she will improve enough to join me at the Antigua Yacht Club event this evening.  Angie, the proprietor of the place, has arranged for Antigua Distillery, local makers of fine rum, to host the event with tastings.   It should be fun.  Besides, when you are in the Caribbean, what’s more important than rum?

A few days ago we fueled up and moved from English Harbor over to Falmouth where the water is a lot clearer.  I was stunned by the barnacles that had grown on Pandora’s bottom during our 6 weeks away.  Think popcorn sized barnacles covering every inch of her bottom.  I hired a diver to clean things up as it was a far bigger job than I could have possibly tackled myself. It took two hours for him to get everything off.  He did a good job, which I’d expect for $4.00/ft

Here’s Pandora on the fuel dock with a slew of Oyster yachts in the background, all cueing up to begin their “around the world rally”.  I’m not sure that this is the year to set off on such an adventure with the virus still running rampant. 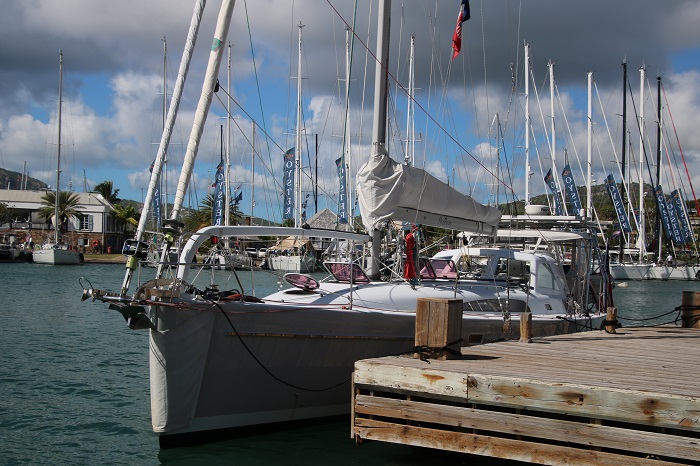 And speaking of fuel, a few years ago one of my tanks developed a leak which I had repaired.  Well, the repair turned out to be more like a temporary band aid and yesterday, when I filled that tank up again, we ended up with a load of fuel in the bilge.  I discovered the problem late in the evening and spent the next few hours pumping out what fuel I could from the tank into jugs.  What a mess.  As I have three tanks, I don’t have to worry about this for the rest of the season except for whatever is left and seeps into the bilge.  It seems that just about every time I leave Pandora for more than few weeks, something goes amiss.   I guess it’s time to get a new tank instead of a patched one.   Another day, another boat dollar.

When we arrived, on New Year’s eve, there were very few yachts in the marinas as many of them were out on charter.  Well, yesterday, one week later, they are all returning and the marinas are packed.  I was told that every slip is booked for the entire season so I am guessing that they are paying for their slips even if they aren’t there.  Must be nice to live the life of “if you have to ask how much, you can’t afford it.”

How about Mayan Queen.  She’s over 300′ long.  We’ve seen her before.  If I recall, she belongs to a Mexican guy that made his fortune in wireless phones.  It must be quite a fortune. 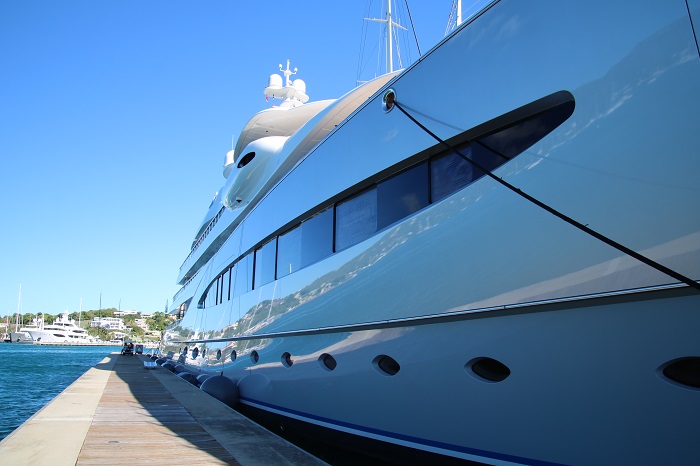 And, under the category of mine is bigger than yours, how about the swim platform?  It’s quite a bit bigger than our back deck at home, and a whole lot nicer. 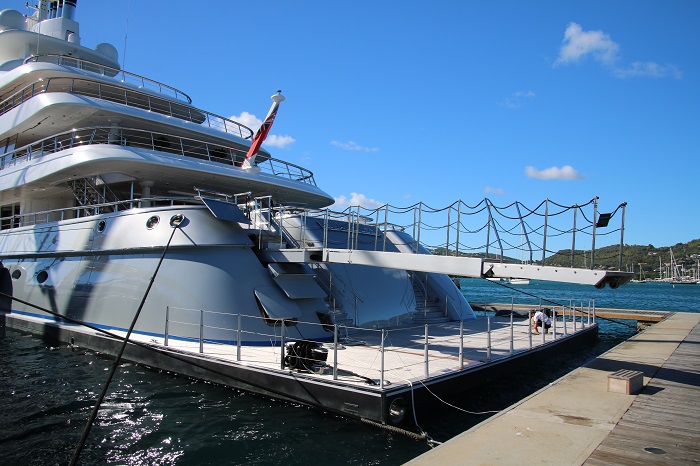 And, you about this, their tender with quad outboards?  It’s hard to imagine the need for 1,800 hp on a boat that’s less than 40′ long. 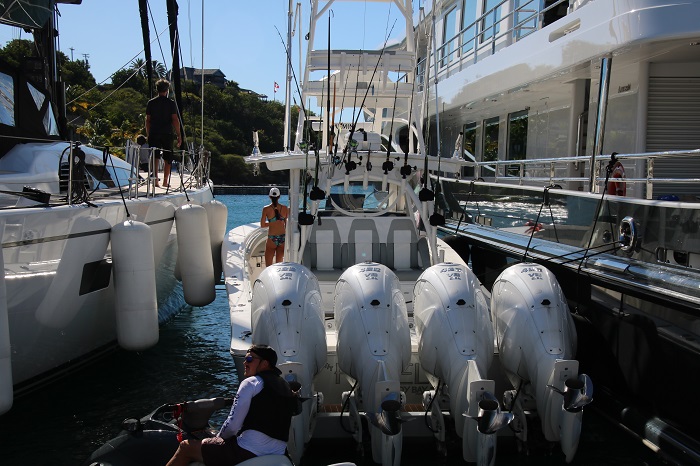 Well, everyone needs a way to get ashore but few can afford a “limo tender”.  Nice ride.   “James, take me to the quay.  And be quick about it.”   “Madam, there is a 5kt speed limit here in the harbor.”  “James, be real, that’s just for the little people.” 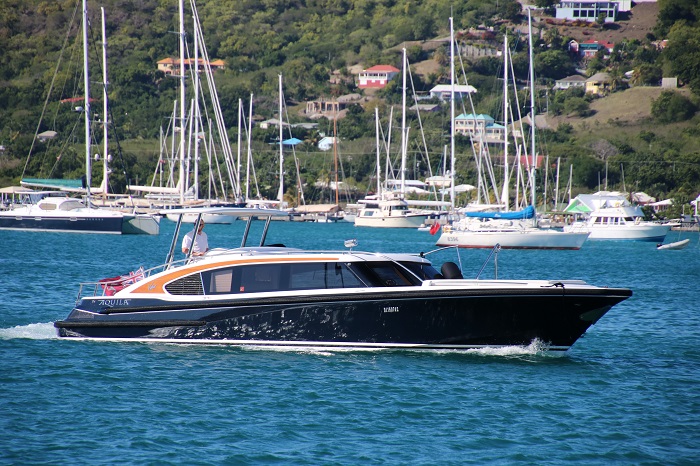 Readers may recall that Brenda and I spent three days racing aboard Marie, a 182′ ketch a few years ago.  She has a new owner and is here in her “usual” slip.  With all the teak, and there’s tons of it, covered, clearly the owner isn’t aboard. 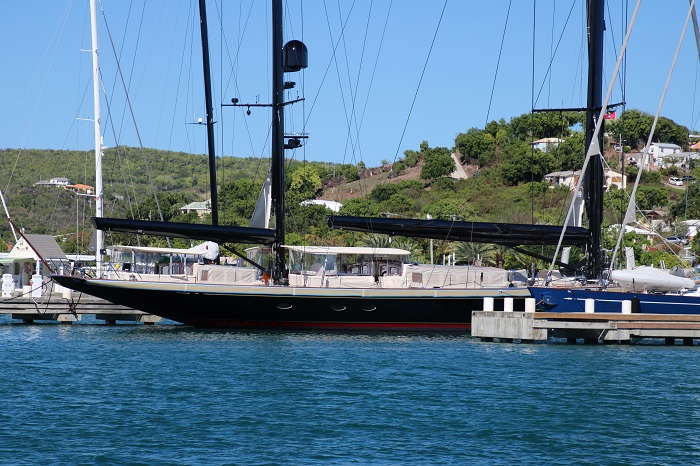 Antigua, known as the “sailing capital of the Caribbean” generally has her share of beautiful sailing yachts.  Here’s two classic J class racers, Ranger and Lionheart.  Ranger is the white one.  I’ve never been crazy about her unorthodox bow configuration.   Her boom is so big that it was dubbed “Park Avenue”. 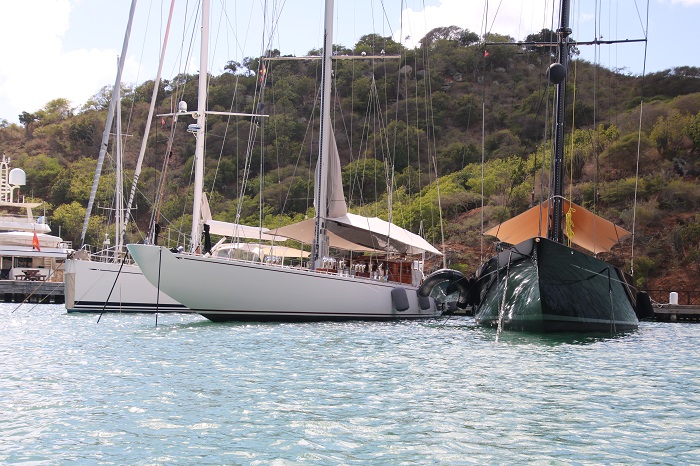 She has an impressive array of chrome. 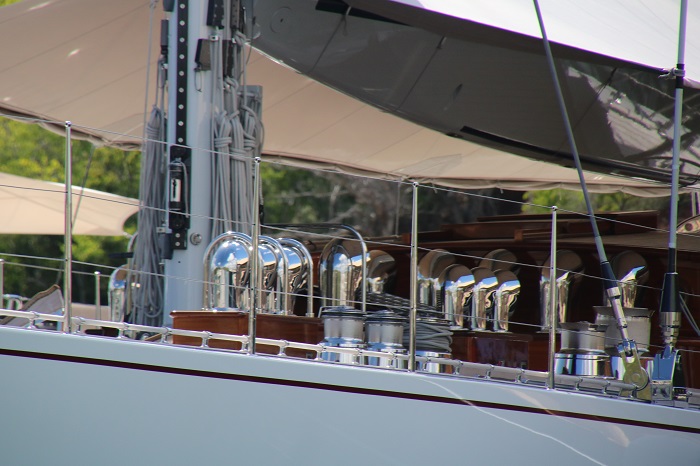 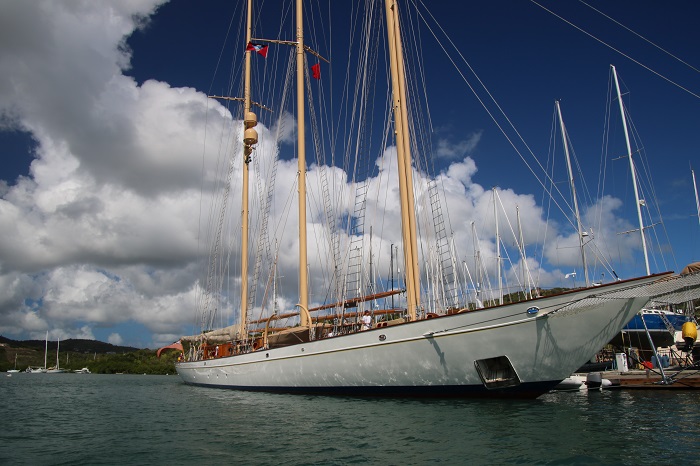 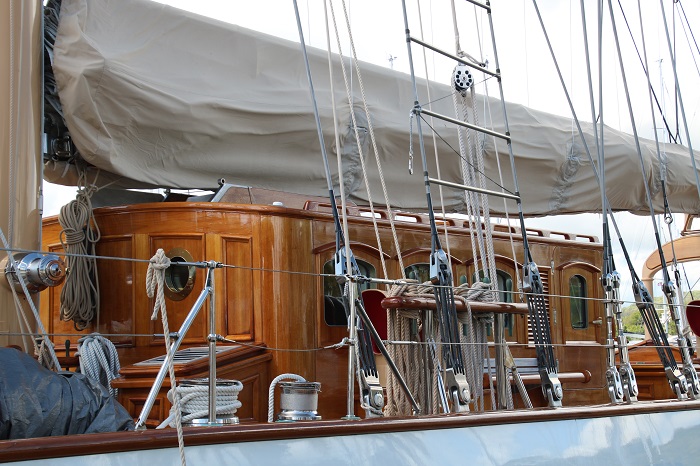 And, where there are mega-yachts, there are toys.  want to spend $5,000 on a surfboard, look no further.  These are becoming very popular with the mega-set.  Lithium powered and you don’t need waves to surf. 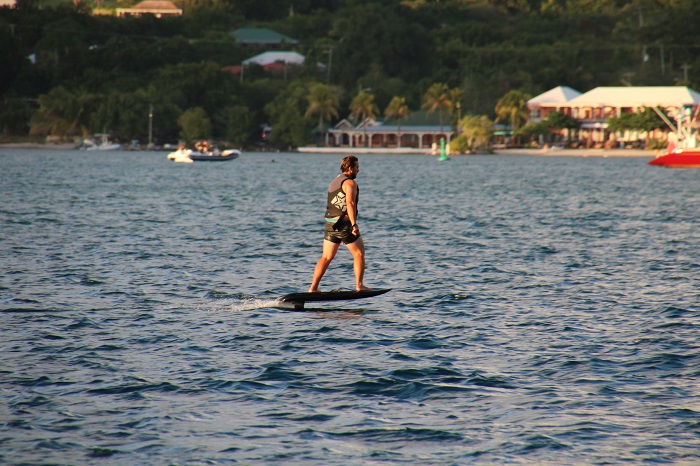 Part of the parade of huge yachts returning to Falmouth this morning is Marie, a a real stunner.  Sadly, as there are so many yachts with that name, I was unable to find out anything about her. 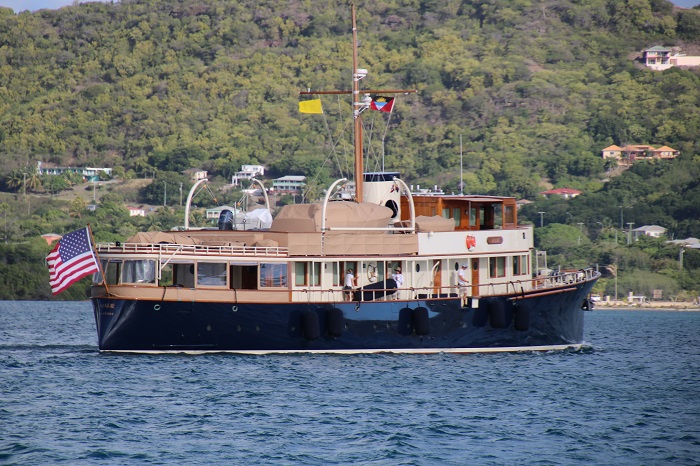 Want to charter a classic?  How about Eros, a meticulously restored schooner from the 30s.  She can take 8 guests so how splitting the cost 4 ways makes it a bargain at about $14,000/week per couple.  Hard to pass up a deal like that. 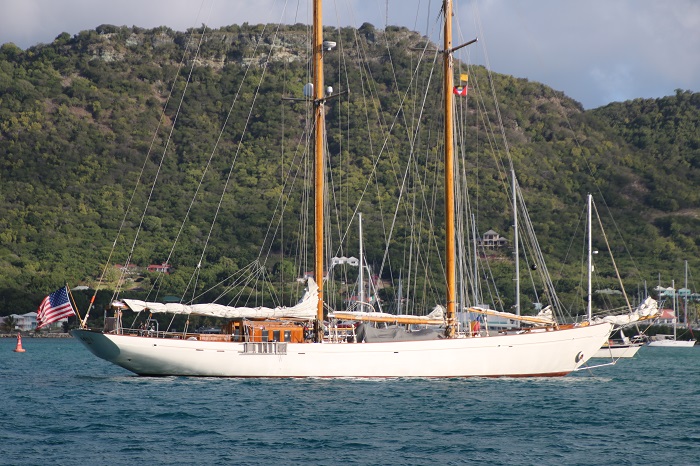 Oh my, so many yachts to choose from.  Where do I begin? 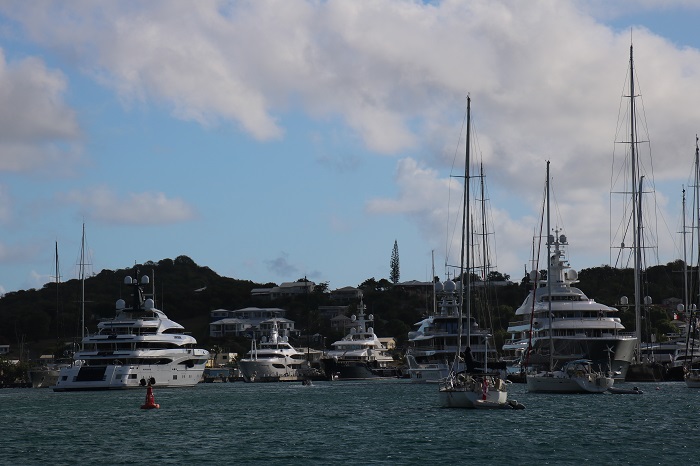 No wait, here’s another one, just pulling in.   Sorry, no-go.  She sports an orange boot top, and I drank way too much orange soda as a kid. 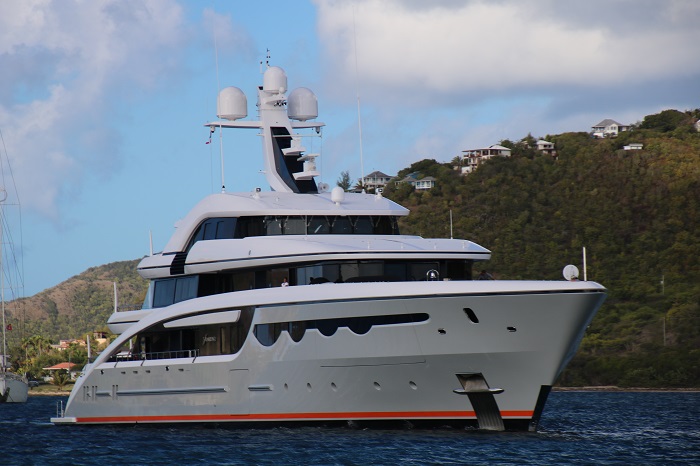 There must be one that’s right.  Yes, some are nearly prefect but I struggle with the price point.   Sadly, I DO have to ask how much.

For now I will just have to be satisfied with our little Pandora.  At least I can be confident that our view is as good as the big boys. 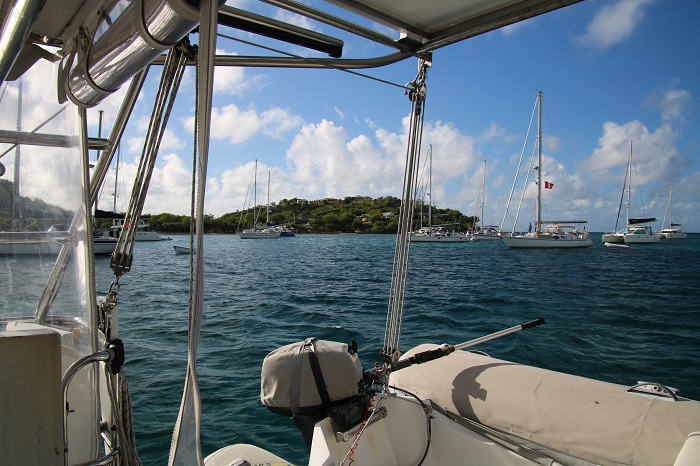 I’d better sign off now as it’s nearly time to head to the beach for a swim.   I feel sorry for my friends up in CT.  I hear that the forecast is for around a foot of the white stuff.