I was Blue but now I am better.

It’s been two weeks since my last post but it feels like a lifetime.  When I last posted, I didn’t have passport with enough time remaining to be valid for the duration of our winter in the Caribbean.

I went to the passport office website and the details of an emergency renewal, defined as taking less than a few months, said something like “you better hope that someone had died or don’t bother us, EVER!”.  Not terribly encouraging so in desperation I opted for one of those services that promise a quick turnaround for about $1,000.  However, after filling out the questions on the website, including credit card information, and tons of personal stuff, when they asked for my SS number, I bailed.   But not soon enough, it seems, to avoid a charge of nearly $700.  The resolution of that issue is still pending.

As you can imagine, by that point, I was really  becoming desperate and decided that my only hope was to contact CT Senator Chris Murphy’s office.  Problem solved and Senator Murphy is now my NEW BEST FRIEND, in a few days one of his aids secured an appointment, in person, at the passport office in Stamford.  Problem solved with a turnaround of a few hours.

Ok, so now I have a new passport albeit with a photo that makes me look like a criminal.  When my son Christopher saw it, his reaction was “if you ever get arrested you’d better hope that the jury doesn’t see this phot0 or they will vote to convict before the trial even begins”.  Thanks for the vote of confidence, Christopher.

Our six weeks at home after leaving Antigua was a whirlwind, visiting our son and his family in Maryland, (more about that in a moment), helping our other son and his partner move into NYC after being with us for nearly a year and a half (what a great experience that was).  Make that driving 6 hours round trip to NYC, three times, celebrating Christmas with Chris and Melody and our friend Craig at our home.

Oh yeah, Brenda and I also decorated our home for Christmas, and then she took everything down the day after Christmas, while I drove Chris and Melody and Mila, their dog, back into NYC.

Back home to pack and winterize the house, blowing out all the water pipes with compressed air, antifreeze in the washer, dishwasher, icemaker, drains and toilets.  A long list.

Finally…. Picking up a rental car so we could drive into NYC to stay with Chris and Melody before going to Kennedy Airport.  The next morning, at 0-dark-30 we headed to JFK only to learn that our flight to Antigua on Jet Blue was canceled 15 MINUTES BEFORE WE ARRIVED AT THE AIRPORT THANKYOU.

Teh terminal was a zoo.  I have never seen so many people in one building.  So much for social distancing.  It was like a giant mosh pit, with luggage.  Beginning at 04:00 we stood line for the next six hours before we were able to finally secure a hotel room.   By the time we made it to the hotel it wasn’t even noon and after a an early lunch Brenda fell asleep on a bench in the bar while we waited for our room to be ready.  Asleep in the bar you say?  No, no gin involved.

Remember that we visited our son and his family in MD?  We had a terrific time and as usual, came back with more than we arrived with.  Repeat after me “small children are noting more than adorable viral incubators”.

Oh boy, did I come back with a doozy of a cold.  Here I sit more than two weeks later and I am still coughing my lungs out.  And no, it’s not COVID, although I was concerned enough to take two rapid tests and a PCR, all negative.

Below is a photo of our family and those adorable vectors.  It’s been four years since our boys, Rob and Christopher, have been together.  Now that Chris lives in NYC, as opposed to Oakland CA, I am sure that we will all be together more often.

Yup, that’s the adorable petri dish gang on the lower left.  From left to right, twins Emme, Rhett and Tori.  When they are sick, you can hardly tell.  With me, yes, you can tell, for weeks on end.  On the top, from left to right our son Rob, his wife Kandice, Brenda, Melody, Chris’s partner and  Christopher.

And, me, down low sucking in all those viral particles.  And Mila, happy, no matter what. 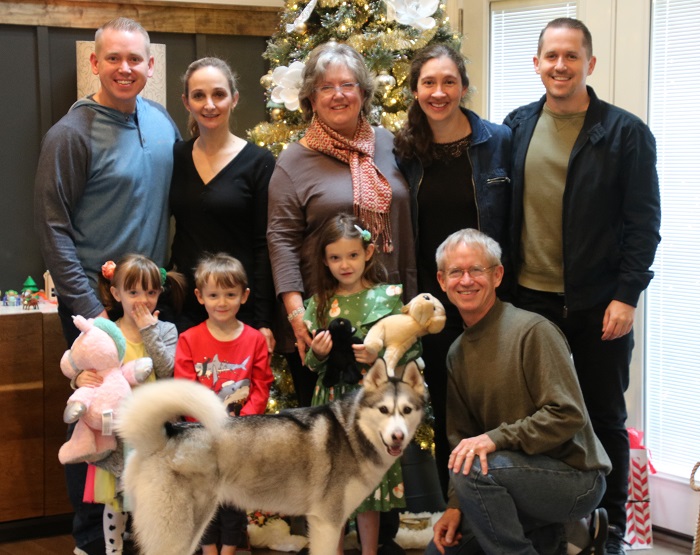 So, after all that we are finally back in Antigua and while our “home friends” are feeling the effects of winter up north, we have this view out of Pandora’s cockpit. 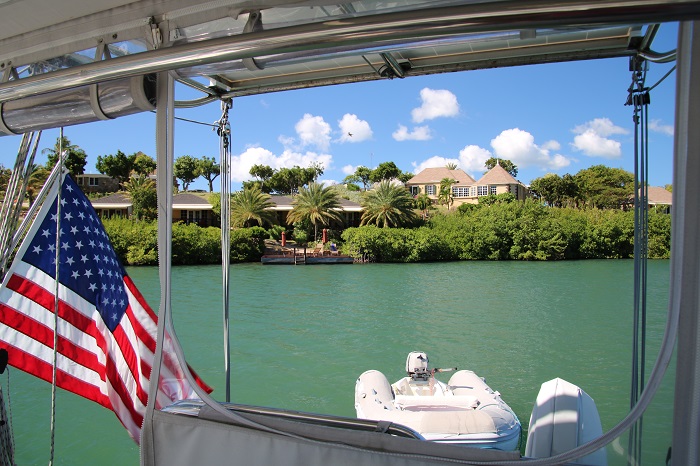 On our starboard side is Nelson’s Dockyard, home to some remarkable boats.  How about this three masted schooner?   She’s huge.  Ada, I think. 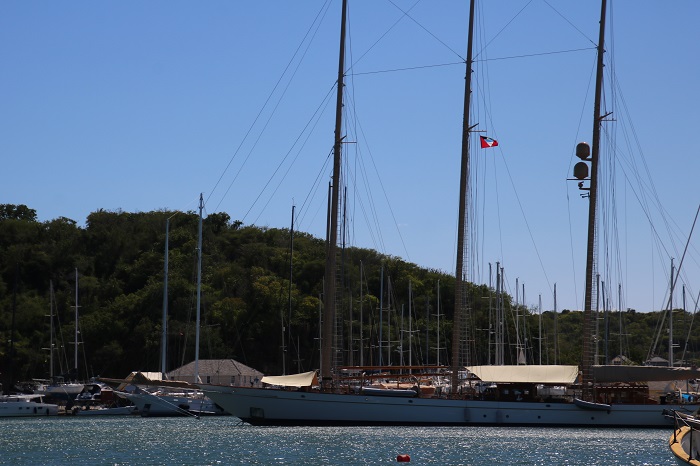 All the schooners here aren’t quite so well kept, though most are.  How about this lovely yacht?  They say that “he who dies with the most stuff wins”.  If that’s true, this guy is a shoe-in. 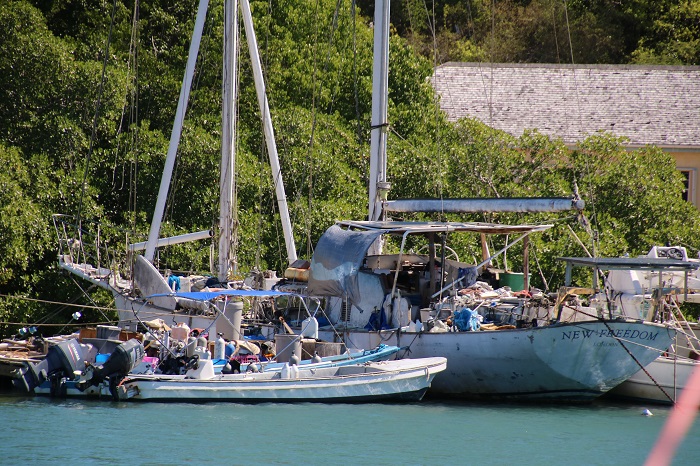 This is really a beautiful place and we are looking forward to hanging out for a few weeks before we head to Guadeloupe. 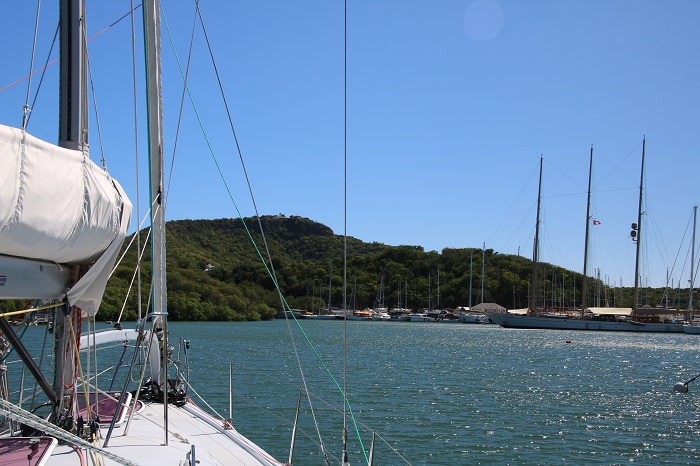 I guess that’s it for now.  I’m happy now but heading back to Antigua was quite a trial thanks to Jet Blue and I have to say that that experience on “Blue” really made me  blue.  Today I received a survey from Jet Blue and as they say “I told it like it is and as Brenda would say “and that’s what I really think?”  It wasn’t pretty but I hope that they contact me as I included my email.

Blue or not, I’m mostly better now except for one tiny little thing…. Now Brenda’s sick.

Life can be cruel but at least we are aboard our boat in a tropical paradise.  it could be worse.

2 responses to “I was Blue but now I am better.”