>As I write this it’s early Saturday morning in North East Harbor and I am sitting on a bench out in front of the library and tapping into their WI-FI as they are not open yet.  However, after a frustrating week of poor Web access I am taking advantage of their fast router to get another post up.

While we were in South West Harbor we were on a mooring near the marina and each evening Brenda and I enjoyed our evening “cocktail cruise” in our dink touring around the harbor to view the sights.   On one of these outings I spied a boat that looked familiar.  I felt that I had seen the boat before but couldn’t place it, the trawler “Spirit of Zipilot” a green muscular yacht with a home port of Anacort Washington, a long way from home for sure.   Interestingly, Joan Kessler was Joan Freeman, television and movie star in the 70s and 80s  There is a website for everything.  You gotta love it.  It seems that one of her last films was the horror film, Friday the 13th.  Interesting connection.

Spirit of Zipilot is a rugged looking boat and very pretty to look at. 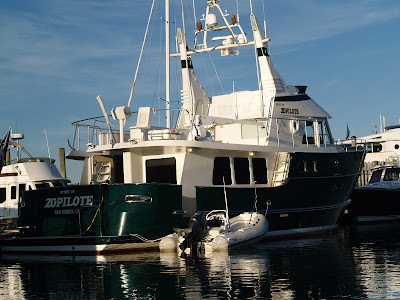 Using a trusty Google search, I looked her up and found out that the owners, Bruce and Joan Kessler have done some serious cruising aboard her and have circumnavigated at least once in a previous boat.   Their boat has been written up in many magazines as it is a well thought out yacht built by a yard that also builds commercial fishing boats.  This article from Passage Maker Magazine (yes, there is a magazine for every imaginable interest.  No, make that at least two…) goes into great detail about the boat and her adventurous owners.   With that in mind, it seems that Bruce was named “cruiser of the year” back in the late 90s when he took his first Zipilot, which was later wrecked on an uncharted rock pinnacle, around the world.  The honor came from that second magazine Trawlers and Trawlering, so I guess that he does get around.  Funny, if descriptive, name for a magazine.  One way or the other, it’s nice to hear about a boat that really gets used.
Unfortunately, so many marinas are just packed with boats that never seem to leave the dock.  Some cover great distances but still sit around a lot.  Here are a number of boats, call them yachts, that we spied in our evening cruises of SW Harbor.
This one was lit up like a small city each night, generator rumbling away to feed the amps. 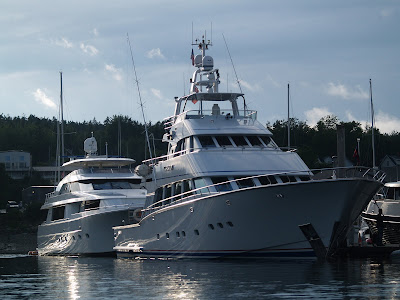 It’s amazing just how big these boys are.  From the stern they really look massive. 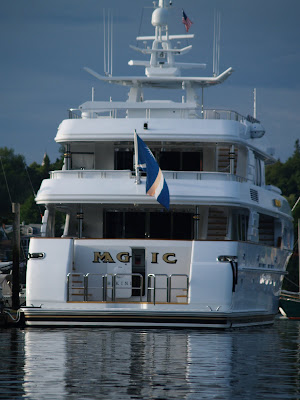 The crew looks downright midget against the scale of these monsters. Hard to imagine having the funds to support such a hobby.  I’d like to give it a go, that’s for sure.  “Here, here Jeeves, please fetch me another mind julep”. 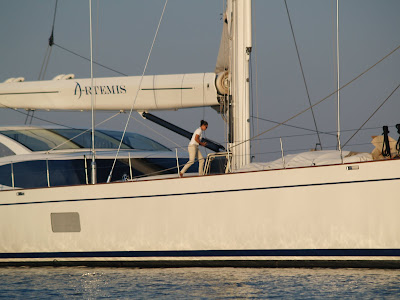 Look how massive this one is in full profile.  A different boat on a dock nearby. You’d think that the dink would be color coded and not look like some sort of nasty growth on deck.  Alas, it’s never quite right.  Such is life. 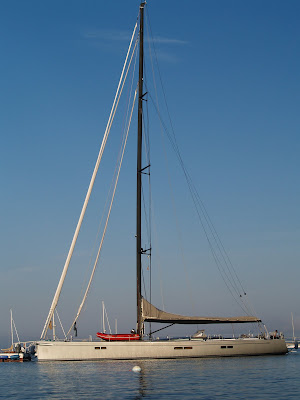 And, at the local coastguard station, your tax dollars at work.  Notice the seats up on the bridge.  They have 4 point harnesses in case the boat is rolled in heavy weather.  Get ready to hold your breath.  These puppies can take about anything and keep going.  And, they are only about 40′ long. 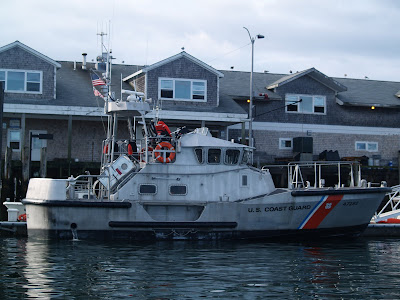 With all of the things that money can buy, what were they thinking?  . 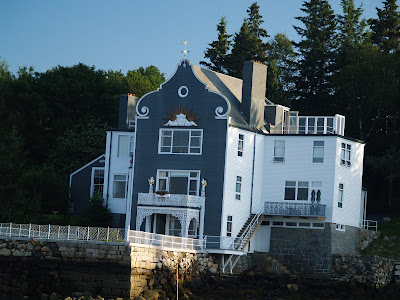 Yet another waterfront home for a pair of ospreys. And, a lot less expensive to maintain.  Not sure about the winter though. 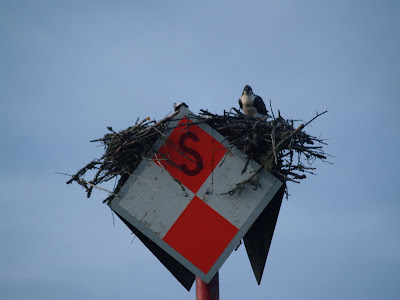 Not sure what the next week holds, our last in Maine, but the weather is looking great.   It’s still not opening time at the library but perhaps I should head back to Pandora and have coffee with Brenda.  That’s all for now.
This entry was posted in Uncategorized. Bookmark the permalink.