Rum, parties and a donkey blocking the way…

It’s been more than a week since the first boats in the Salty Dawg Rally began tying up in Nelson’s Dockyard and a few are still on the way and should arrive soon.   I don’t know where to begin with all that has been going on here as we have been busy with events, sometimes two, every day.

We’ve had cocktail parties and group photos.  And, the group is getting so big that we had difficulty in fitting everyone into to the shot. 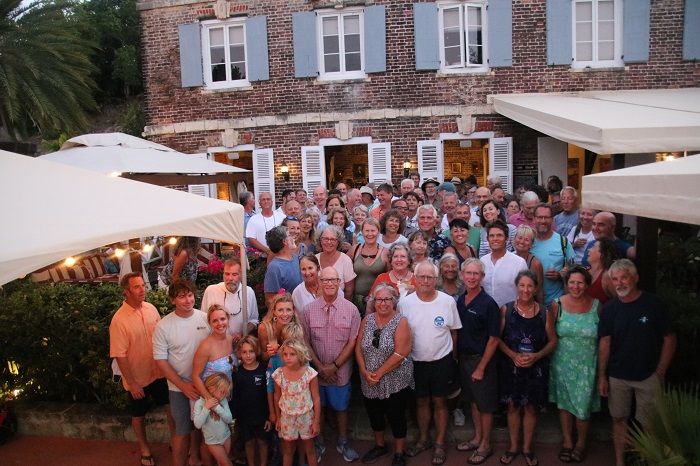 As in past years, we were honored by a visit from the Minister of Tourism, Fernandez, a highpoint of the evening. 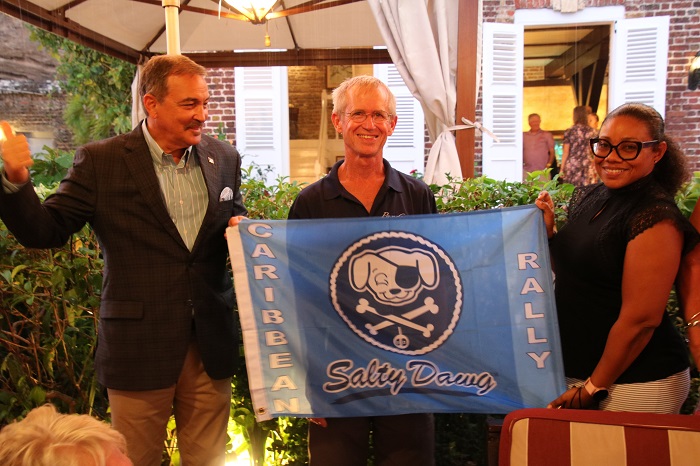 And me, the tireless Antigua cheerleader, always happy to address the group.  What’s with the grey hair?  My mom used to say that I was blond.  Hmm… 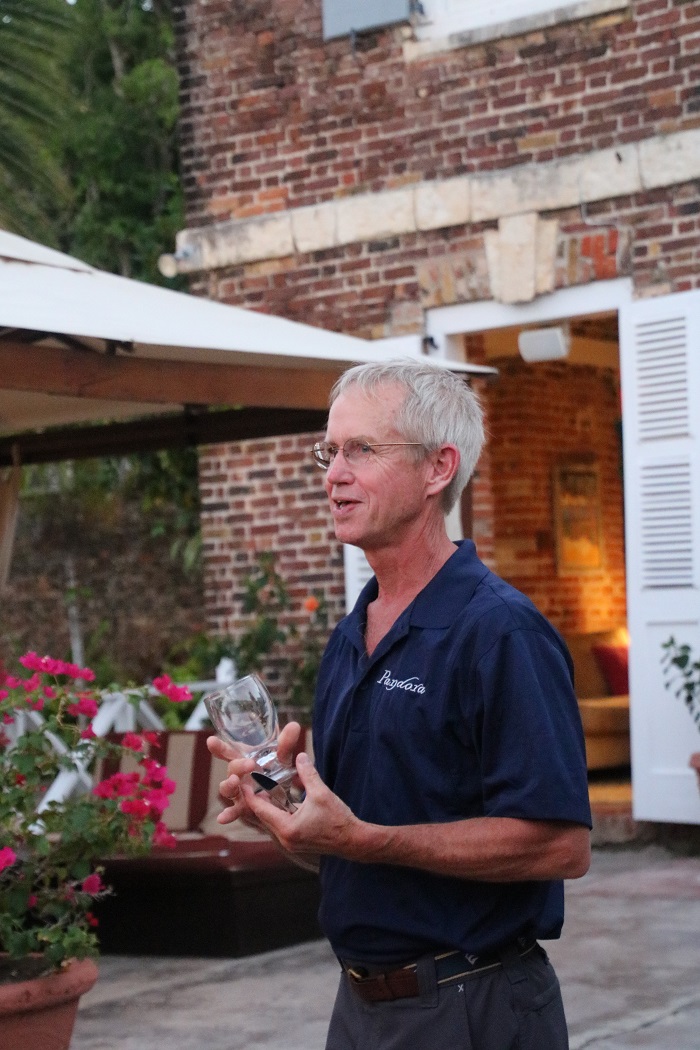 Following cocktails at our arrival event, we had a lovely meal poolside at Boom, part of the Admiral’s Inn.  It was a beautiful night. 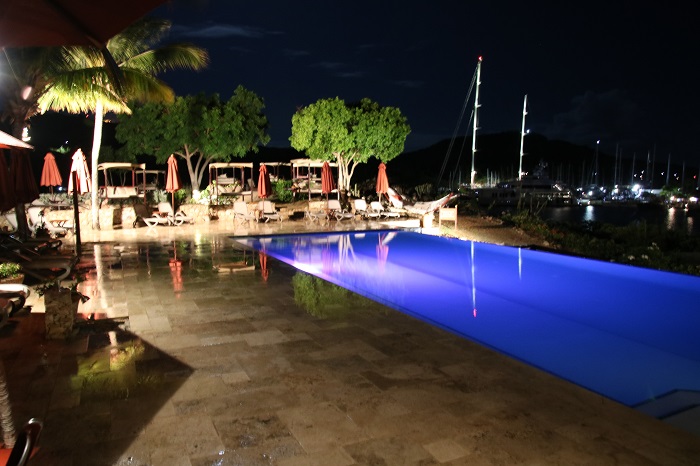 We celebrated the arrival of one of our boats, Nobody Home, that had come to the rescue of another rally participant that lost part of their rig and sails, helping them sort through a mess of sails and lines that ended up in the water, hundreds of miles from land.   Nobody Home stayed on station for several days helping to  sort things out before continuing on to English Harbor.

When Nobody Home finally arrived, they received a hero’s welcome from the fleet who went out to escort them into the harbor. 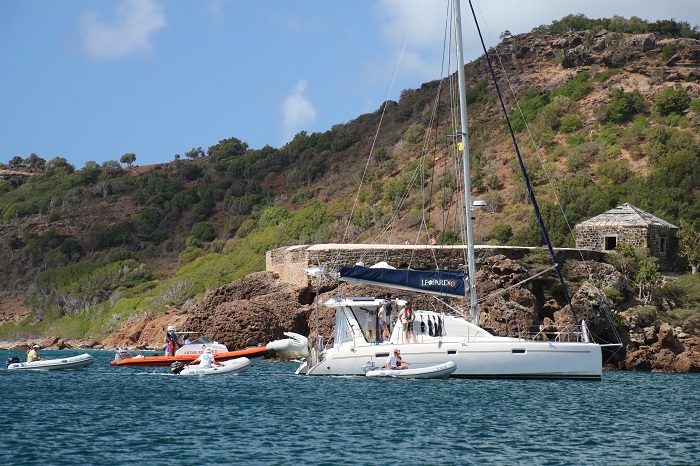 The Antigua Coast Guard was on station to lend a hand if needed. 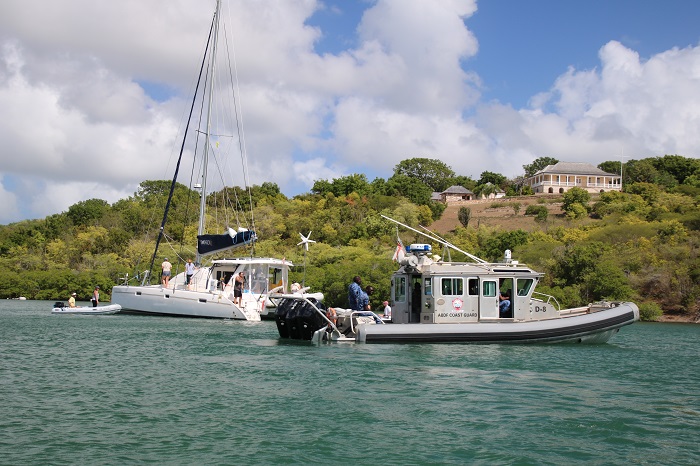 I greeted the crew at the dock when they were finally secured, with a “tot” of Antiguan rum to celebrate their arrival.  It was good to see them safe and sound. 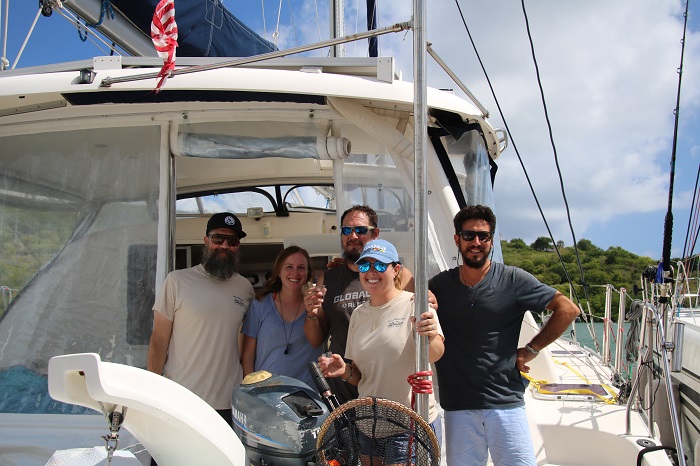 With the fleet tied up in the Dockyard, we filled the place.  It was very rewarding to me, after so many years of beating the drum about Antigua, that we had a record number of boats finally here. 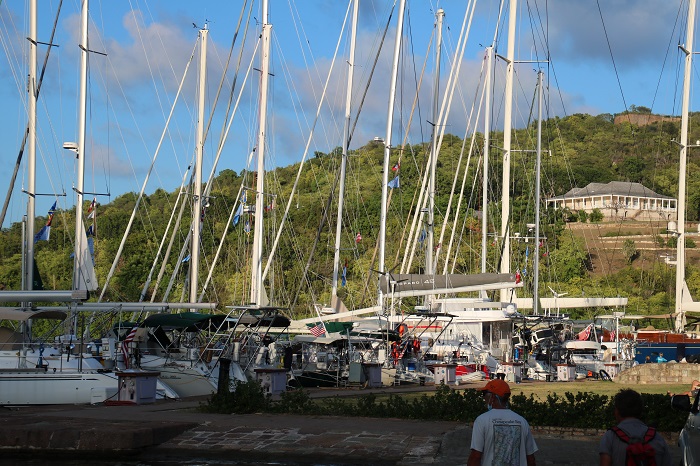 It is remarkable how big the boats have gotten over the years.  When we first began cruising, decades ago, a big boat was anything over about 35 feet.  Nowadays, the average boat in the fleet is over 50′.  These two carbon cats are part of a trend toward catamarans as opposed to the tried and true monohulls.  And they sport all the comforts of home in a very stable platform. 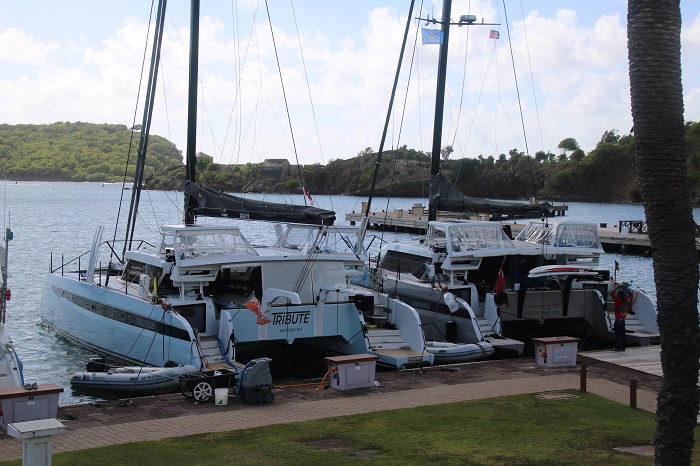 Another great event was “rum in the ruins”, hosted by Dr. Christopher Waters, head archeologist for the island. 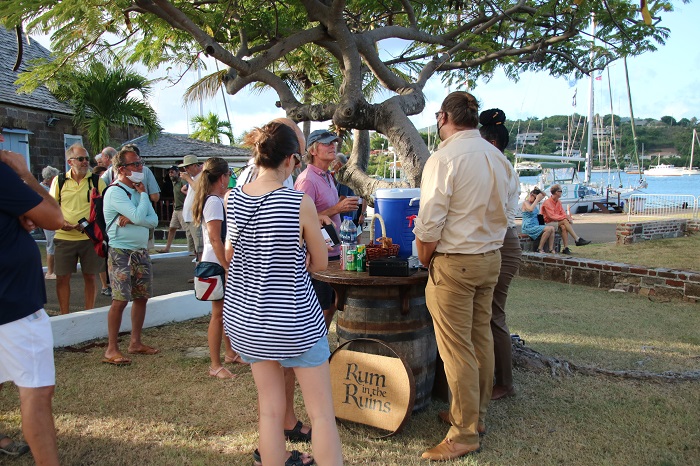 He spoke to us about the history of the Dockyard.   Chris is an excellent speaker.   And the rum part, tasty but REALLY strong. 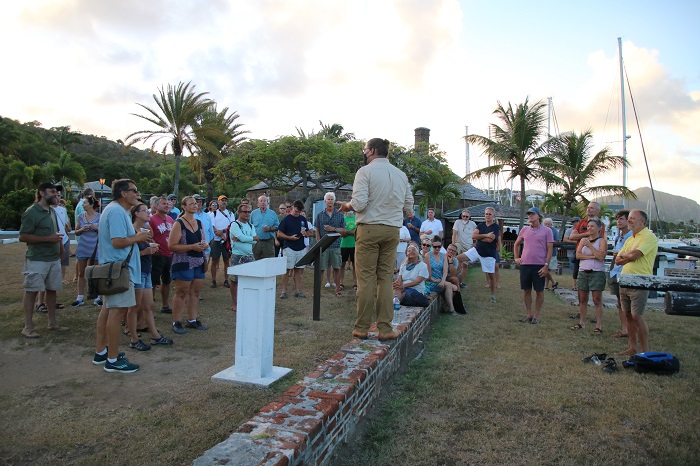 Thinking ahead to what else we can do in Antigua and “down island”, our friend Bill from Kalunamoo shared his knowledge with others about what awaits the explorer. 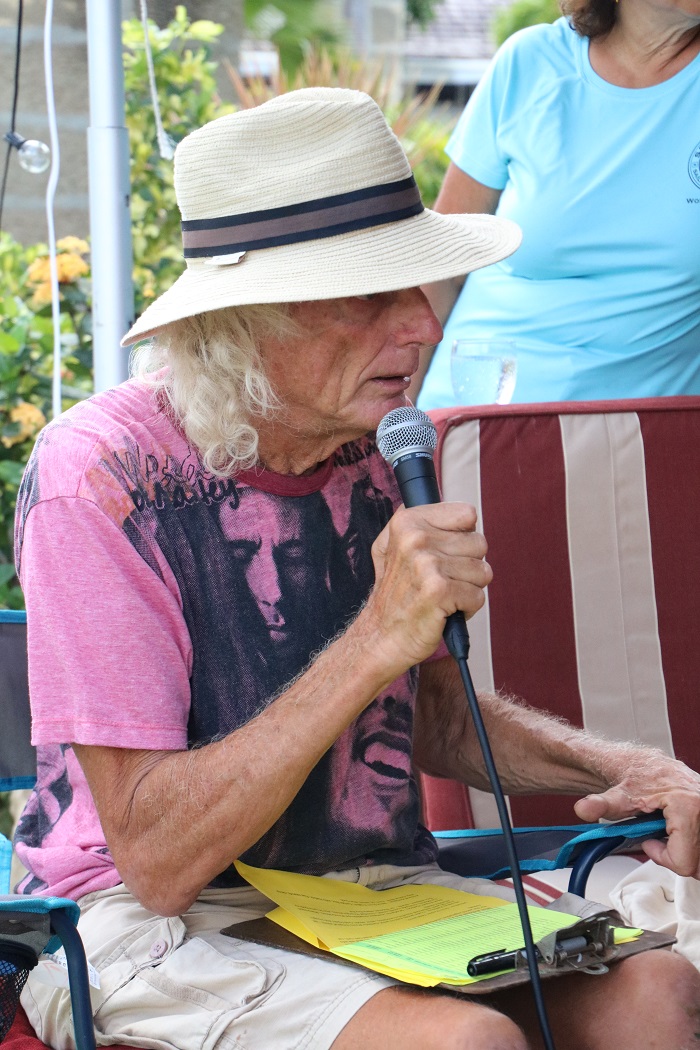 About 2/3rds of the fleet are visiting  Antigua for the first time.  They were all ears about what to see and where to go. 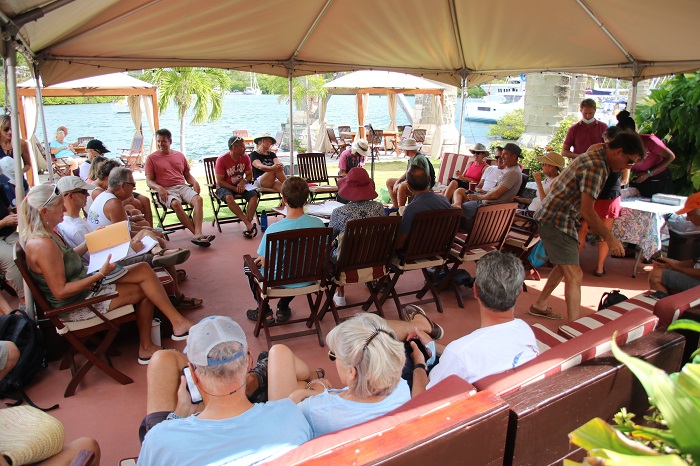 There are still a number of restrictions here in Antigua so some of our events had to be postponed until January when things are expected to be more or less back to normal.

With vaccinations mandatory for many here in Antigua and vaccination required for all visitors, Antigua is a lot safer than the US.  With over 90,000 citizens living on the island they have only had 100 deaths due to Covid, a remarkable achievement.

Our host for many of our events, Paul Deeth of the Admiral’s In, treated me, Brenda along with my crew Peter and his wife Jane to a harbor tour in his Longtail from Thailand.  Paul brought that boat back when he captained a yacht on a round the world tour many years ago.   You will recognize this design from a James Bond movie. 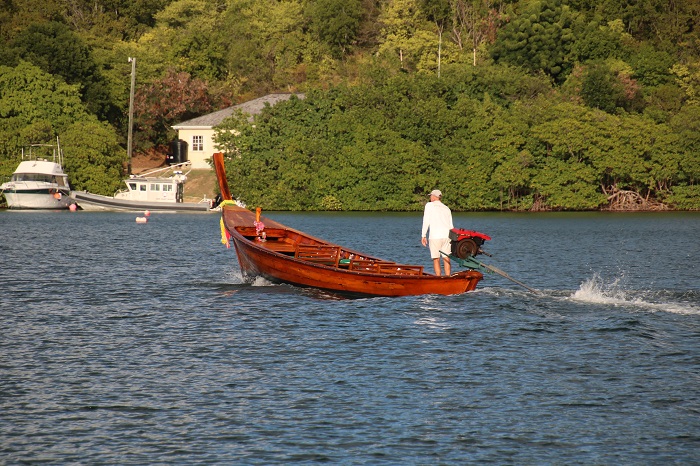 It is powered by a diesel engine mounted on a swivel to steer the boat with a surface piercing propeller. 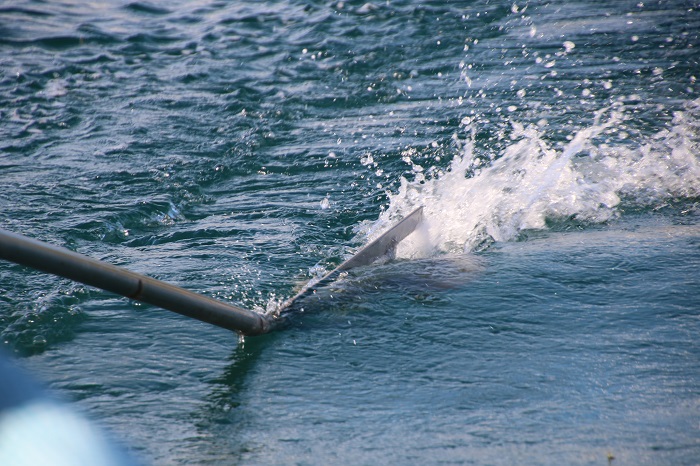 Paul treated us to a much more stately cruise than James, the “shaken not stirred” Bond guy. 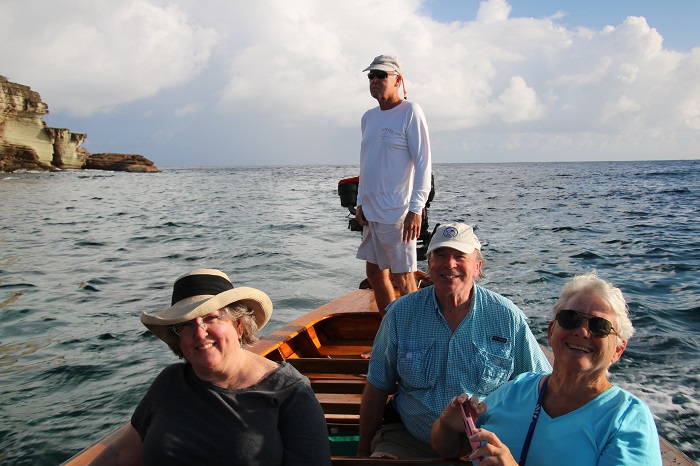 We passed Pandora docked with other Dawg boats. 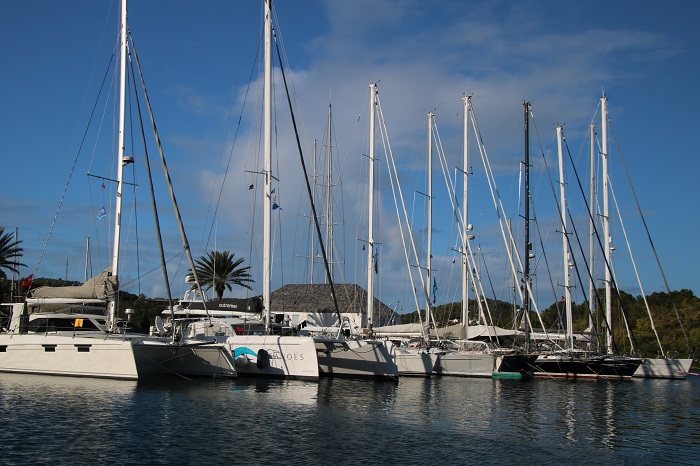 Past Fort Berkley at the entrance of the harbor. 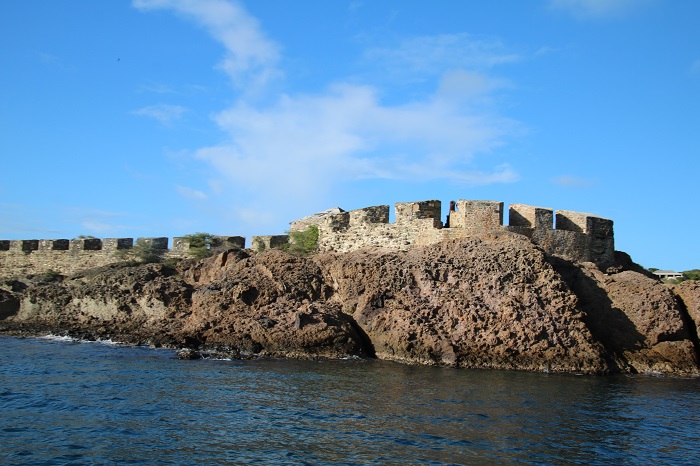 The Pillars of Hercules, dramatic stone columns opposite the fort. 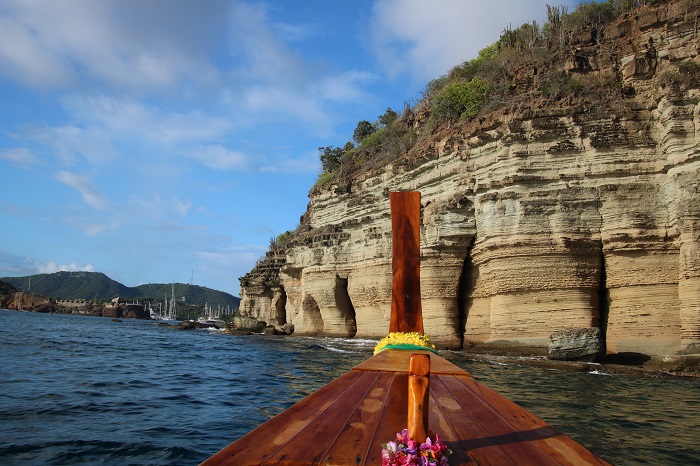 I just can’t get enough of being on boats and I was having a wonderful time. 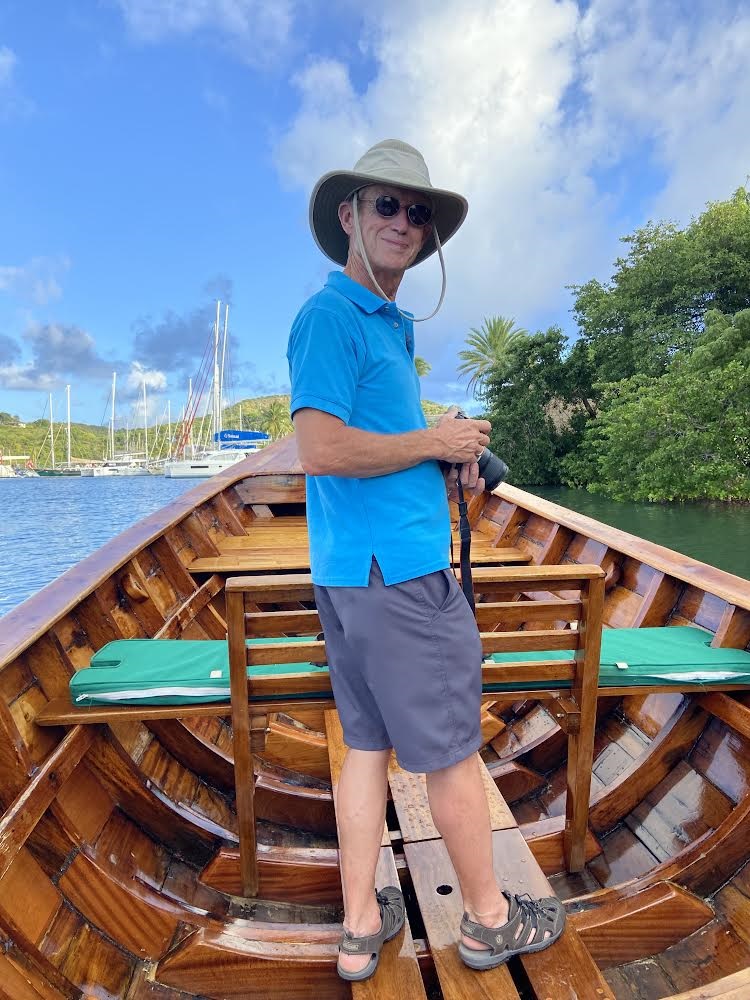 We rented a car yesterday with Peter and Jane, to tour the island.   I won’t go into too much detail except to say that on the way back to English Harbor I let Google Maps choose the way.  Not a great decision as it routed us down an “alternate” route that was little more than a narrow and really rocky single lane road. There were times when it was so narrow and rough that I was certain that we’d be hopelessly stuck.  Peter thought the exact same thing.

After miles of lurching along, certain that the “end was near” and we finally began to see “the light at the end of the (green) tunnel”, our path was blocked by a very stubborn donkey.  Pull as I might, I could not get him, her? to move out of the way.

As I tugged and coaxed, I was worried that I might be kicked.  Never get behind a donkey, I have been told.  Alas, no kicking and we finally got by and continued on our way. 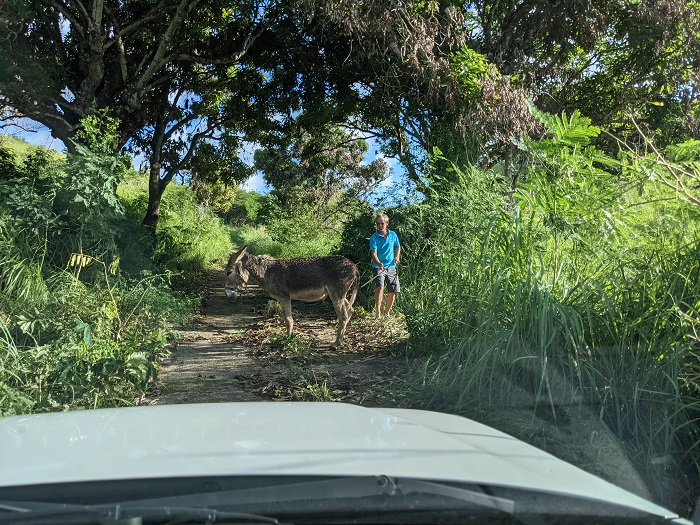 I’ll admit, and so would Peter, who was driving, that there were times when we both thought that we’d soon be marooned in the middle of the wilderness.  To say that it was a rough ride doesn’t do it justice.  For miles we lurched along a path as the brush scraped along the side of the car and the rocks banged against the undercarriage.

Anyway, we made it back…

So, with our departure for the holidays coming up on Sunday, It’s hard to cover all that has happened since we arrived in Antigua.  With that in mind, perhaps I’ll leave it at that for now.

I’ll admit that I am looking forward to catching my breath as it’s been plenty busy here in Antigua.   What with cocktails, and a lot of rum and even a donkey to liven things up, yes, I’ve been busy.

One more thing.  Brenda and  have been summoned to Government House today to have an audience with the Governor General, ostensibly to thank me for my work in bringing the rally to Antigua.    All I know is that they are sending a car to pick us up at 09:00.  At least Brenda and I won’t have to ride a donkey to get there.

Brenda and I are asking ourselves, what does one wear to meet with the Queen’s representative, someone that everyone refers to as “his excellency”.  Wish us luck.