We made it, finally… How about a rum punch?

I am so glad to be in Antigua.   Pandora is all snug on the dock here in English Harbor and about half of the 50 boats heading here have arrived, with many more to pull in over the next few days.  This place is perhaps the most scenic place I have ever been.  It just drips of history as the harbor was, for more than 100 years, the Caribbean base for the British Navy.

We are really the only boats here, so early in the season.  Clearly, the docks are beginning to really “go to the Dawgs” and that is a very good thing. 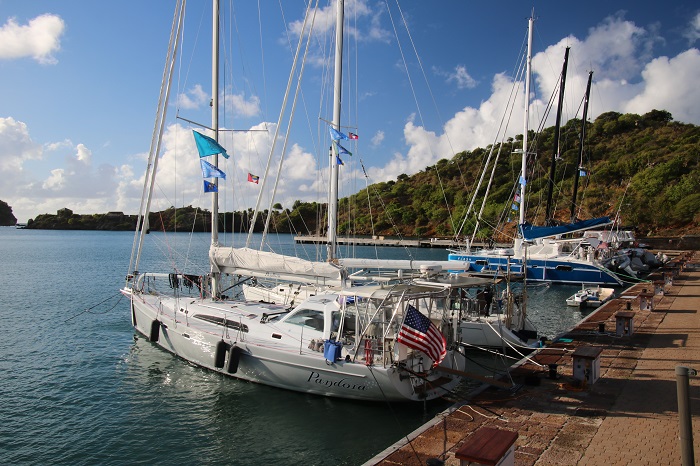 It feels like an eternity since I cast off from the dock in Deep River to begin my run to Antigua with a stop in Hampton to join up with the fleet, three weeks ago today.

The run south was painful if not particularly rough but it seemed that for much of the trip, the wind was either on the nose or there was no wind at all.    We set a record for motoring, 152 hours listening to the engine rumble away.  And, as Pandora’s engine is under the sink in the galley, all that heat of 500 lbs of iron radiate into the cabin for hours after the engine is turned off, which it seemed hardly ever happened.    As we weren’t able to open hatches much of the time, that heat had no place to go.

For much of the run, the seas were so smooth that you’d never know that we were 500 miles from land.  That swirl in the water was a dolphin surfacing.  We had a small pod running along with us on several occasions.  Try as I might, I could never get a decent photo. 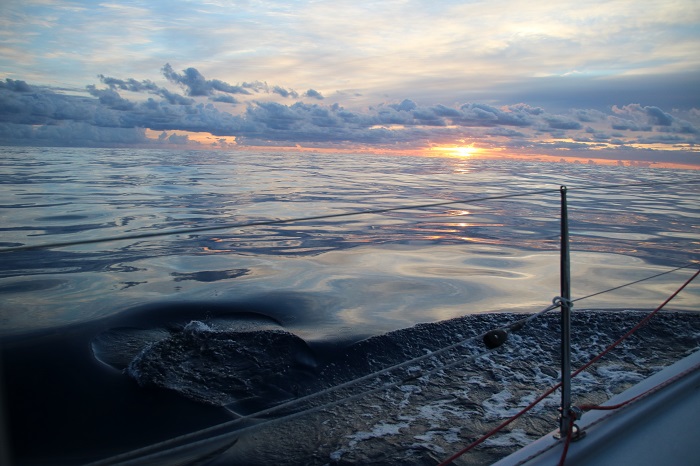 Other times, plenty of wind to move along, sometimes at nearly 10kts, a pretty impressive turn of speed for a boat like Pandora. 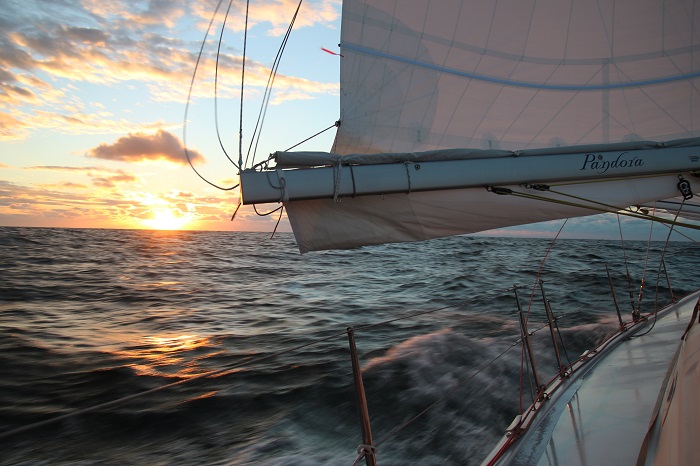 Sadly, Pandora doesn’t motor particularly fast when there isn’t wind to help the boat move.  And at the low RPM that I need to use in order not to run out of fuel, I am not getting much of a push at all.

Slow or not, better to go REALLY slow than to be becalmed with NO WIND AT ALL, a constant fear for anyone trying to keep moving when there isn’t wind.  But, you already knew that, if you follow this blog.

If I want to up my speed from 5.5kts to even one knot more, the fuel burn rate can nearly doubles and that means that I will run out of fuel twice as fast without really going much faster, a real life example of “better late than never”.

The three of us, George, Peter and me, divided up the “watch” at night in four hour increments.   George and Peter swapped the 8-midnight and the midnight to 4 watches, every day or so, but I always took the 4-8 as that allowed me to enjoy my favorite moment, the sunrise, as the sun brightened the sky to the east.  Sunsets are great too but nothing to rival the rise in the morning after a dark night.   I have no idea what that stripe on the cloud was caused by but it struck me as particularly interesting. 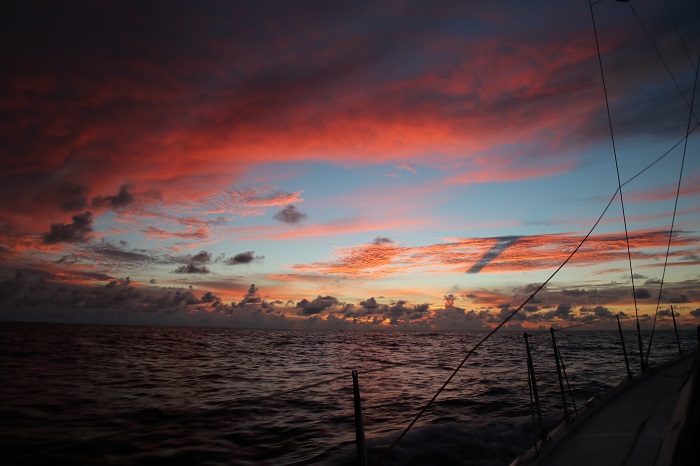 And, a day later or sooner, a very different view.   “Sorry Bob, that looks just about the same to us, just another sunrise.”   Ok, ok, I guess you had to be there.  Besides, with nothing but the horizon, clouds in any direction for days on end, it doesn’t take much to make you excited about something new, even if it’s not really new at all.

Yes, you had to be there, and I was and for a longer time than I really wanted.   Nice view, never the less. 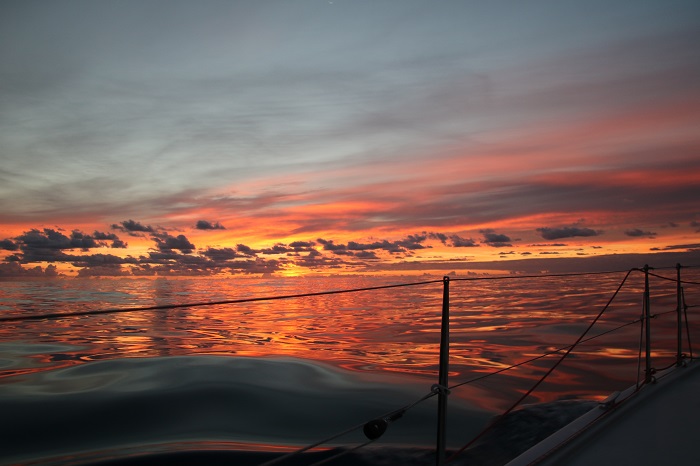 We went for days without seeing a single boat.  This yacht transport passed us on it’s way from the Med to Ft Lauderdale.  Does this count as a single sighting or multiple?  You decide. 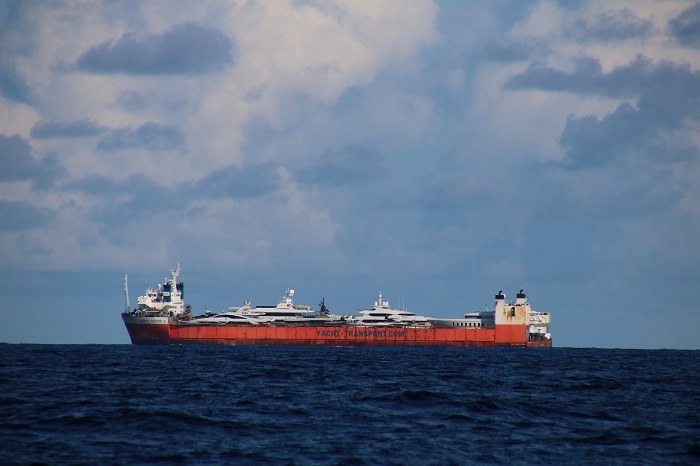 I had explored the idea of having Pandora shipped to Greece aboard a transport like this but was put off by the $30,000 price tag.  Perhaps in my next lifetime.

Imagine what the cost to run big yachts like this is across the Atlantic?   As Commodore J.P. Morgan of the NY Yacht Club once quipped, “if you have to ask what it costs, you can’t afford it”.  Ship Pandora to the Med? I asked and sure enough, I couldn’t afford it.  Next question…

And, speaking of really expensive stuff, how about this sub we passed leaving Hampton? 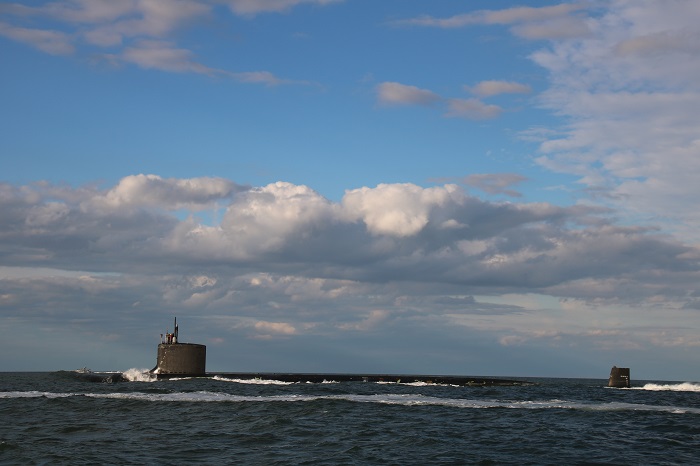 I could almost hear the conversation on deck.  “Captain, can I drive?” 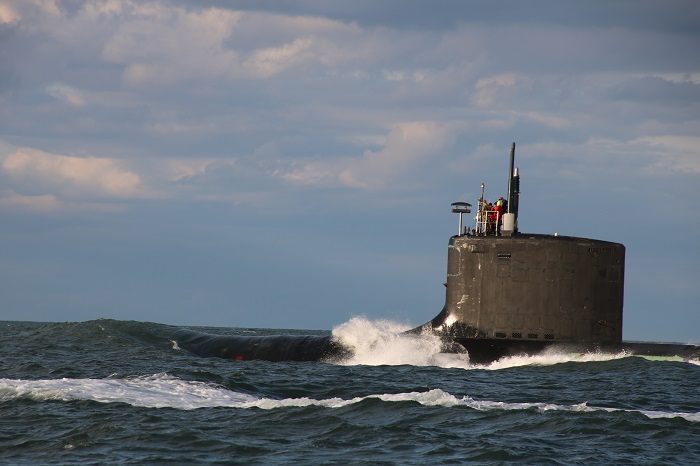 It isn’t all about sunrises, sometimes it’s about rainbows. Who doesn’t love rainbows? 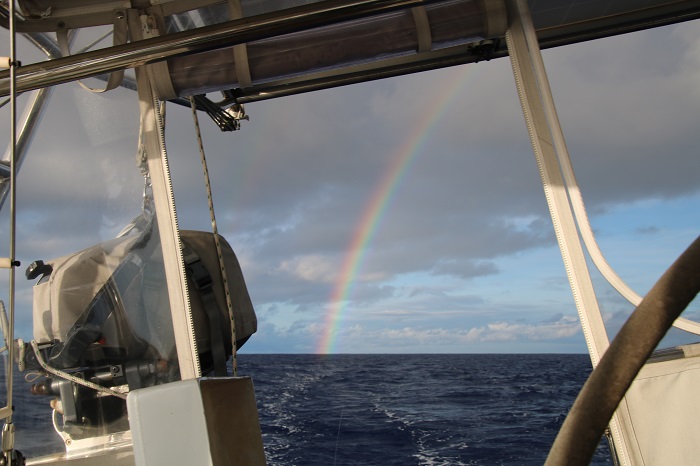 We fished a number of times and caught a nice Mahi-Mahi.  I was so anxious to deal with the bloody flopping thing that was regurgitating his last meal as it made a mess of my cockpit, that I forgot to take a photo.  You’ll have to trust me that we caught, and ate, a fish.  After landing one, enough fishing as we just might catch something bigger.

And speaking of the “one that didn’t get away”, other boat on the run caught a marlin, a powerful fish.  Theirs was over 4′ long.  They didn’t even try to bring it aboard.  What do you do with a fish that weights nearly 50lbs?  Take a photo and say “goodbye little fishy”.

So, exactly what did we do all day long, aside from worrying about running out of fuel, while waiting for the wind to pick up?  We read books and when we were done, we read a book that others had already read.  And, as the pickings got thinner, we re-read the same books. 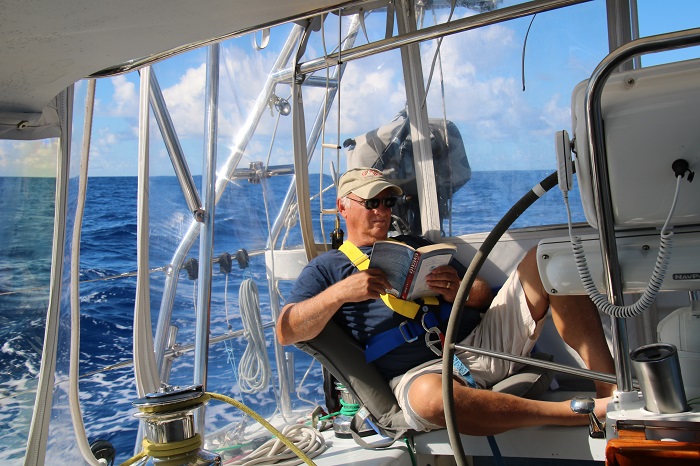 We even talked to each other but honestly, much more time was spent with noses buried in a book.   For sure, that’s a lot better than fiddling with a phone.  Right?

Doesn’t Peter look like he’s having a good time? 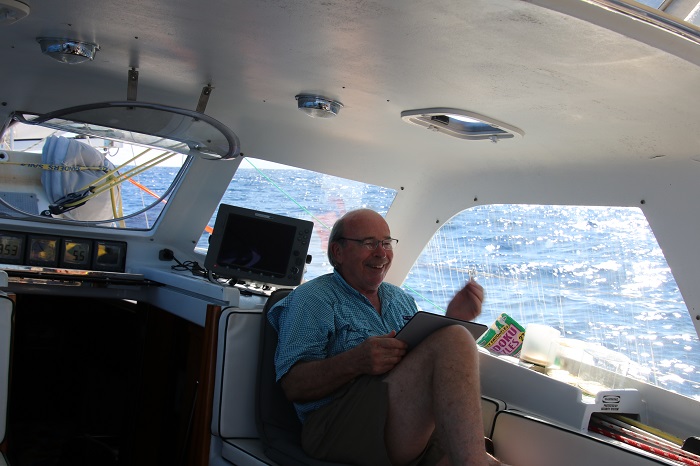 Well, here we are in Antigua and if you ask me, none too soon.

Now the fun begins.  Can you say Happy Hour!  I can and will, again and again…

One response to “We made it, finally… How about a rum punch?”