A great Thanksgiving and a visit to Cumberland Island for shark teeth.

It’s Saturday morning and the sun is out.  We were thinking about making a run to St Augustine offshore today but decided to take the easy way by going inside.   The winds are from the right direction, NW at 20 but the distance is pretty far for a one day run and it’s getting late.   Besides, the wind in the anchorage is gusting to 22kts and it’s only 8:30 so I expect that it will be stronger than forecast.

In any event, we have plenty of time so inside it is.    Today we will leave mid morning and run about half of the way to St. Augustine and continue for the rest of the way on Sunday.

Thanksgiving was great fun with about 100 in attendance.  In past years the crowd has been up to three times that size but some think that the nasty weather over the last few weeks has kept some from making it there or that they just decided to bypass the festivities and head south where it is warmer.  It has been plenty cold, that’s for sure.

So, yesterday we made the one hour run down to Cumberland Island, one of the many barrier islands that run down the coast and make the ICW possible.  These islands form a barrier from the ocean and the ICW runs behind them all the way from Norfolk VA to Key West.   One of these islands, Cumberland, is now a state park and there are trails and great beaches to explore.  There is even a dock that you can tie up the dink to so getting ashore is very easy.  As you head in past the visitor center, a small building manned by a park ranger, you instantly see how rugged this island would be without paths.   The ground is completely covered in Sago Palm and above that is a dense forest of Live Oak.  It’s very primeval looking.  I’d hate to have to bushwhack through this place in the dark. 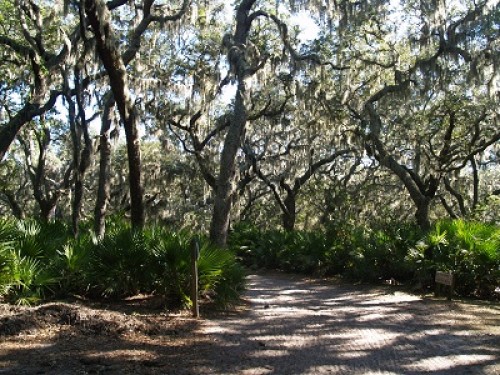 Once you are off of the wide trails, not so inviting. 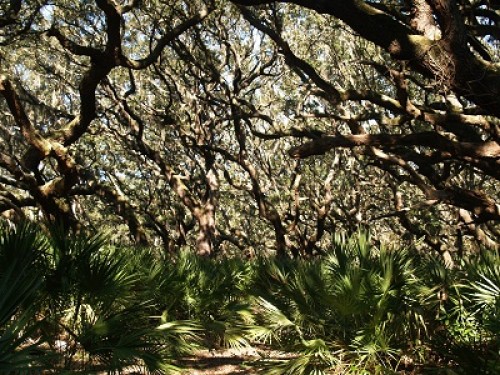 We followed the wide path out to the beach.  They have a number of nice boardwalks to take you over the dunes. 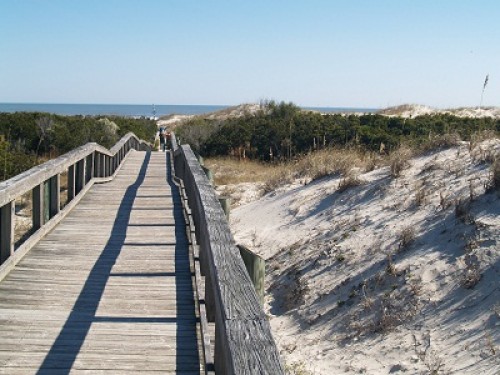 The dunes are very pretty, sculpted by the wind. 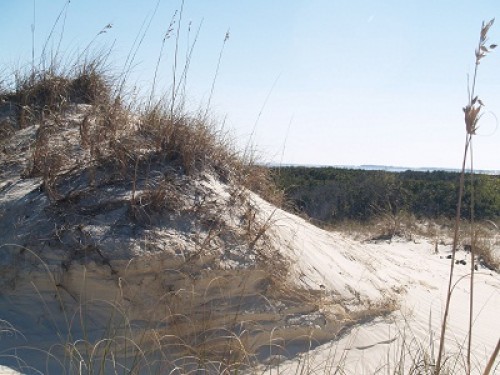 After a walk on the beach we headed inland and walked across a landscape that looked a lot less inviting.  Pretty gnarly looking, actually. 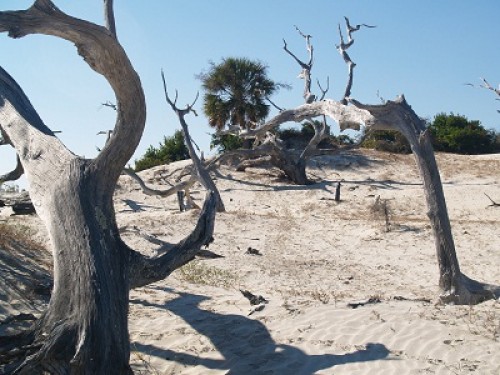 The surface of the weathered wood was very interesting. 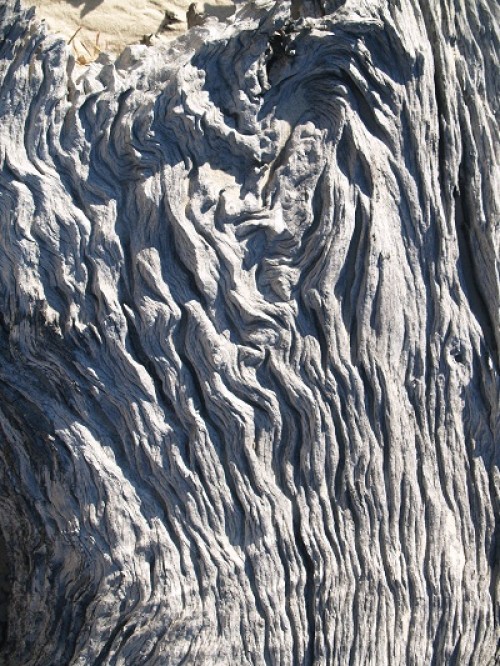 There are loads of critter footprints   I expect that this was some sort of small bird.   The trails were everywhere. 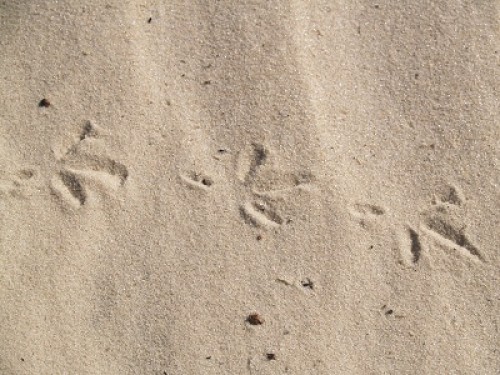 There are ruins of a large mansion built here in the late 1800s by the Carnegie family.    You can certainly see how it must have been a magnificent home and made possible by great wealth and no income tax. 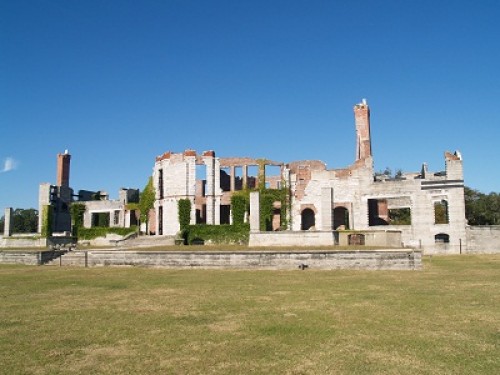 Some very nice details like these flower urns.   You can imagine how grand this place must have been. 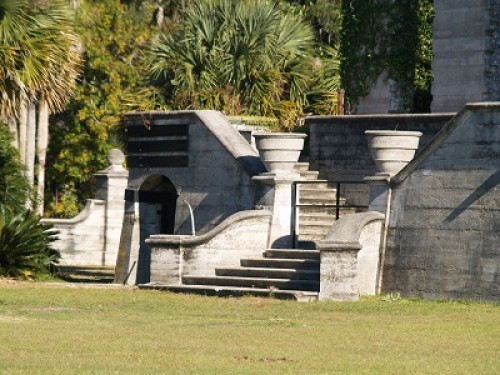 And, some old cars.  The only way to get to this spot is by water so they must have been brought in by ferry.   Not much left of these. 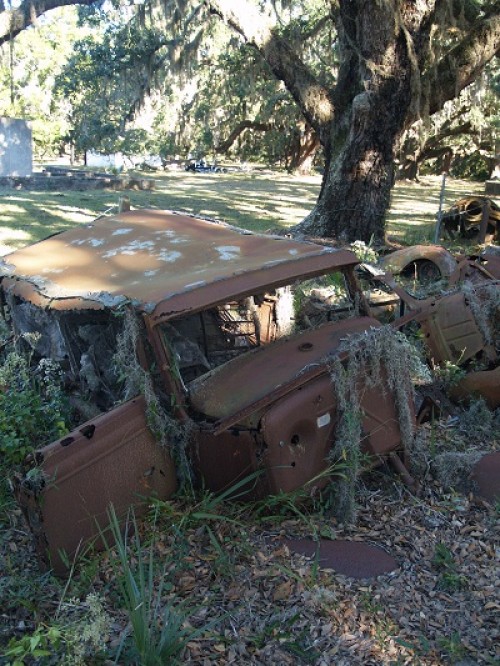 Plenty of other outbuildings on the estate.  Some were probably very fancy.  I liked this one. 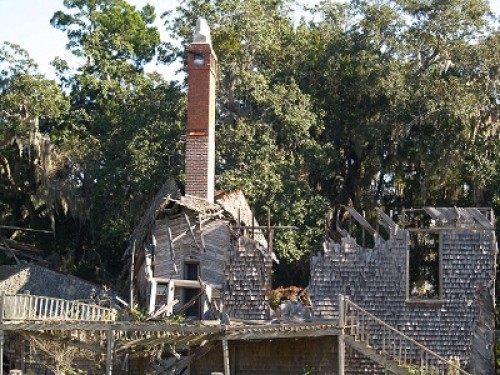 Some really interesting outbuildings including this tower.   Pretty ornate and fragile looking. 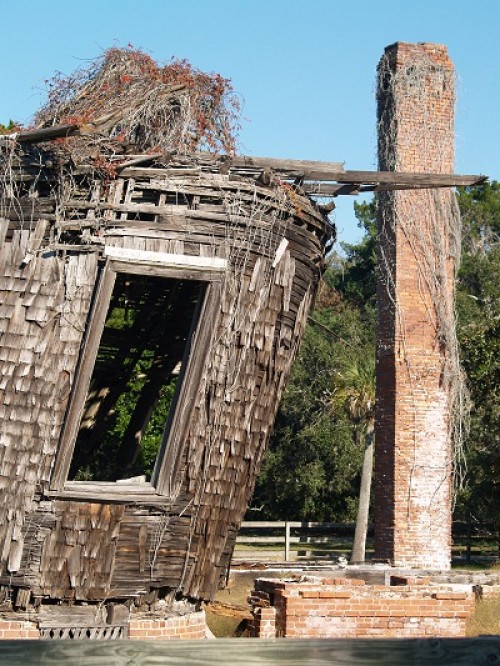 So fragile, in fact, that while we sat nearby and enjoyed a snack, we heard some cracking and creaking and the whole thing came down in a cloud of dust.   Amazing timing.  “Honest, Ranger Rick, we didn’t touch it.  Really!!” 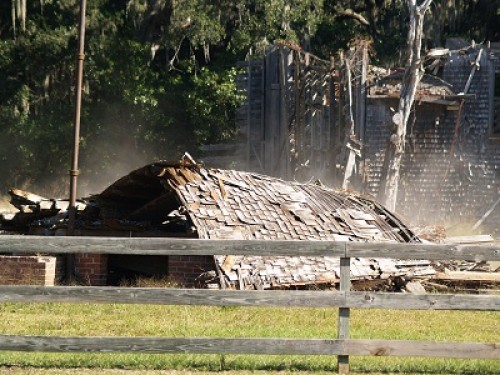 Some of the local turkey population.   I guess that these guys knew that it was the day after Thanksgiving and that they were once again safe. 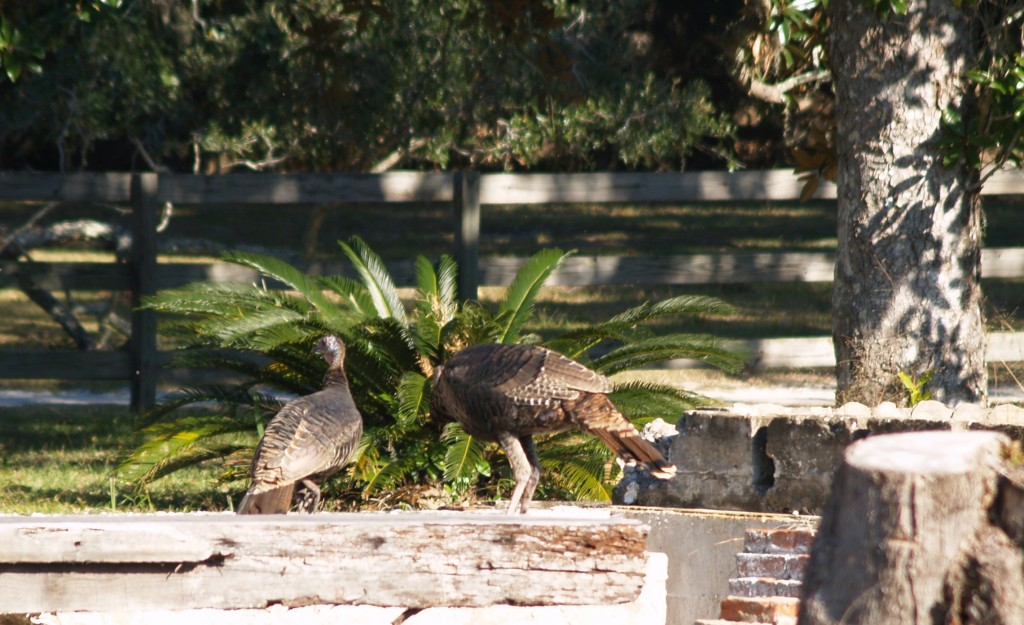 When the property was abandoned fore-bearers of  these horses were left behind.  They were completely unconcerned by our presence. 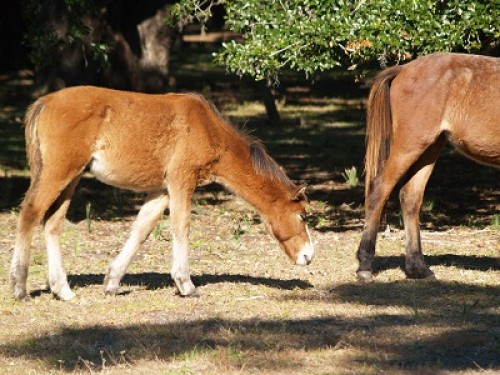 We also took some time to dig in some of the dredging spoil sand piles for fossil shark teeth.   We found two small ones.  Not much to write home about but it was fun.  I was lucky to stumble on a framed sifter.  Had there been more time I expect that I would have found more. 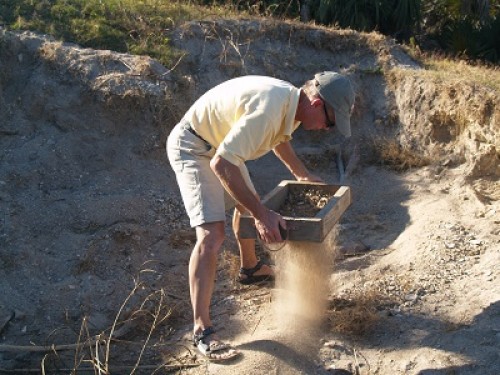 Tiny but pretty neat.    I guess that these were’t the large sort of prehistoric sharks you imagine making a meal out of something the size of Pandora.  Plenty sharp though. 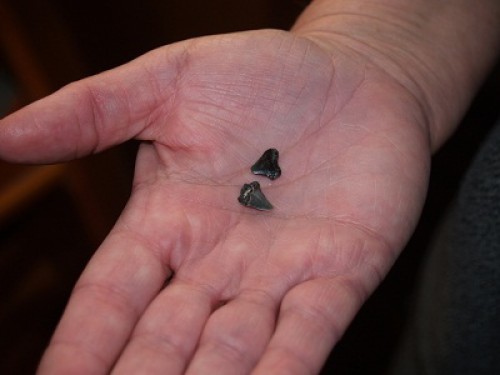 We also picked up some great shells on the beach.  Don’t know what we will do with them but you can bet that by the time Pandora returns from the Bahamas she will be groaning under the weight of all the shells aboard. 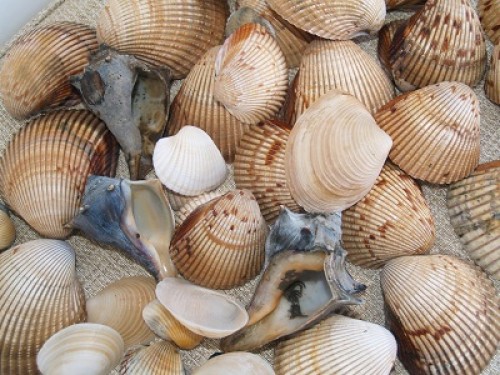 To end the day we had a really nice sunset followed with dinner with some friends aboard Pandora.  It looks fake doesn’t it.   No, I just used a standard lens with no filter.  That’s really the way it looked, trust me. 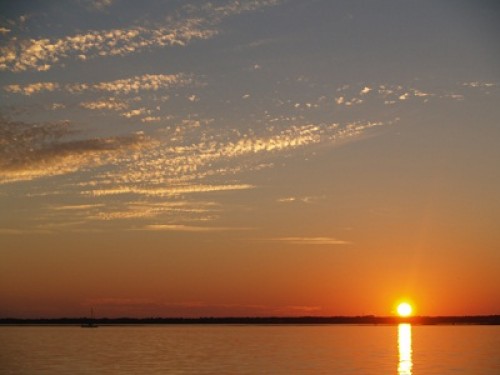 So, time to get going and catch the fair tide as we continue south.

One response to “A great Thanksgiving and a visit to Cumberland Island for shark teeth.”