On our way home.

It’s almost time to leave Maine and head home.  With the remnants of Hurricane Ida to our east things are beginning to settle down here in Booth Bay Maine.

As recently as a few days ago, it was unclear as to what track Ida, even though she was much weakened, might take as she headed up the coast, so the forecast for Friday, tomorrow, was very uncertain.

When I spoke with Chris Parker, our weather router, a few days ago, the forecast was completely unclear with forecasts suggesting that the wind could be anywhere from about 10kts to 35kts NW with higher gusts.  It is very difficult to forecast wind with such a fast moving low.  Fortunately, now 24 hours away from our departure, the winds will likely be on the very low end of the forecast and while we will probably have to motor much of the way, it’s nice to know that it won’t be too “salty” a run to the Cape Cod canal.

Last night was really rainy and today the dink had about 5″ of water in it.   That’s a lot but the winds were very light and the rain a lot less than others faced in CT and NY where there was widespread flooding.

In any event, our plan is to head out from here in Boothbay Harbor for the canal, early tomorrow morning.  Fingers crossed that the wind will behave and drop to a reasonable level.

The crossing should take a bit less than 24 hours and with an 08:30 current change in the canal on Saturday, that should put us in Buzzards Bay fairly early on Saturday morning before expected westerlies will kick in.  The big question is how far west we will be able to get before the wind picks up right on our nose.

Time will tell but it will be nice to be heading home and wish us luck.

So, change of topic.  Since leaving Rockland a few days ago, Brenda and I made a brief stop at Allen Island, summer home of Andrew and Betsy Wyeth.  They owned, two islands off of Port Clyde, Allen and Benner Islands for many years and built a number of homes on both islands.  It is clear that a great deal of thought went into the design and siting of each dwelling as they blend into a wonderful image that evokes one of Andrew’s paintings.

We have visited this spot many years and have always picked up one of the half dozen courtesy moorings that the family keeps at the ready.  I have asked for permission over the years but on this visit we were the only boat in the harbor so I didn’t want to bother anyone on shore.

It was nice to be there again but sad too as the loss of Betsy and Andrew end an era.  I mentioned a visit “Knitting with Betsy” a number of years ago when we visited and saw Betsy knitting on her front porch while Brenda knitted aboard.   I Wrote about that wonderful experience, if from a distance, in this post.

Now that both Betsy and Andrew have passed, it looks like the only inhabitant on the islands is the caretaker who we saw when he took their resident lobster boat Archangel, to head into Port Clyde.  He didn’t seem concerned with our presence as he passed by in the morning prior to our departure.

This is a shot of the main house and the porch where Besty and her companion knitted so long ago.  Sadly, no Betsy on this visit. 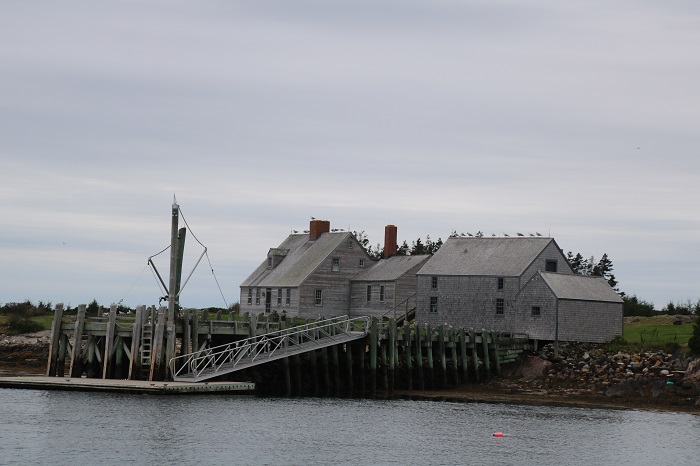 Behind, Pandora nothing to disturb the tranquility except the occasional lobster boat out checking traps and plenty of sea birds. 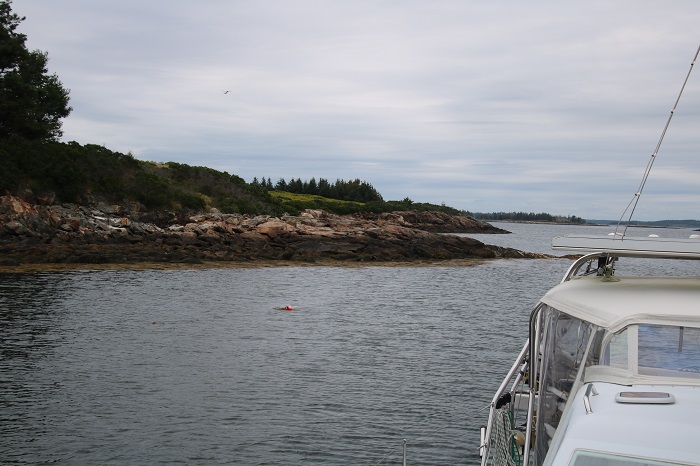 On our way to Booth Bay we passed Eastern Egg Rock, where there is a colony of puffins.  Sadly, we did not see any as we passed by.  This is the only colony of puffins on the US East Coast as they were hunted to extinction 100 years ago.  This colony was carefully transplanted from Canada many years ago.

The colony was started by bringing young birds to the island, the first to be there since the late 1800s and became a model for rebuilding flocks of seabirds elsewhere with great success.  Today there are 1000 pairs nesting on the island.  Read about the project at this link, a rare example of us repairing the damage by man so long ago.

Sadly, we didn’t see any puffins but there were many birds flocking around the island, evidence of how many birds make Eastern Egg their home.

Maine is known for the many beautiful lighthouses and we passed on of the most unique one as we approached Booth Bay, the Ram Island Light, with it’s unique walkway heading out to the light.  I wonder what it is like to be on that walkway when the  seas are raging. 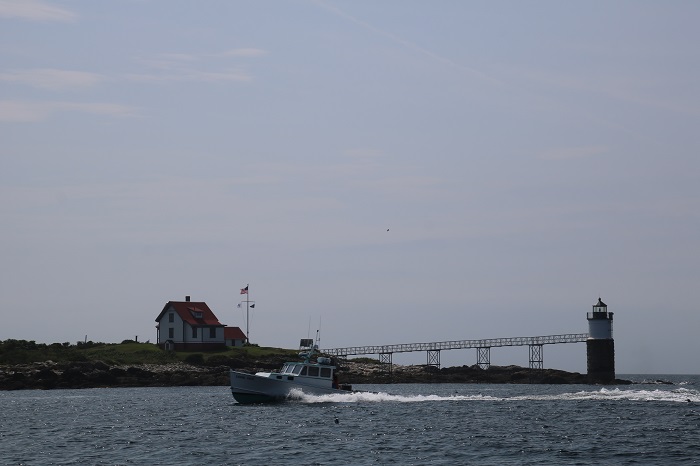 Booth Bay Harbor is a beautiful spot and one that we have visited many times over the years.   The harbor is well protected and this church is particularly stunning when the sun is setting.  At night the face is lit. 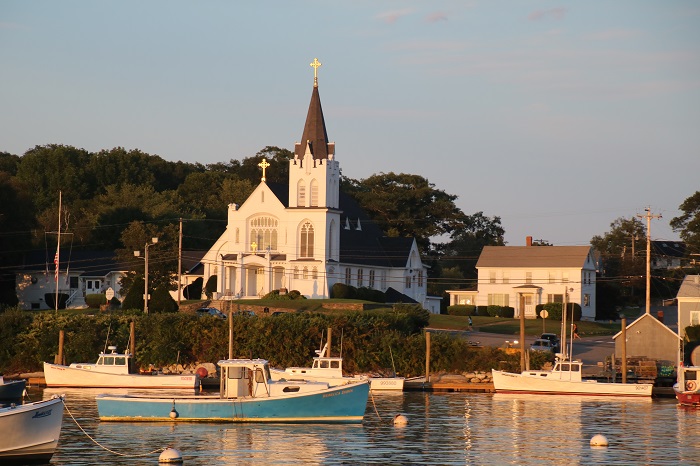 The harbor is pretty built up but being so close to Brown’s Wharf has made for good wifi. 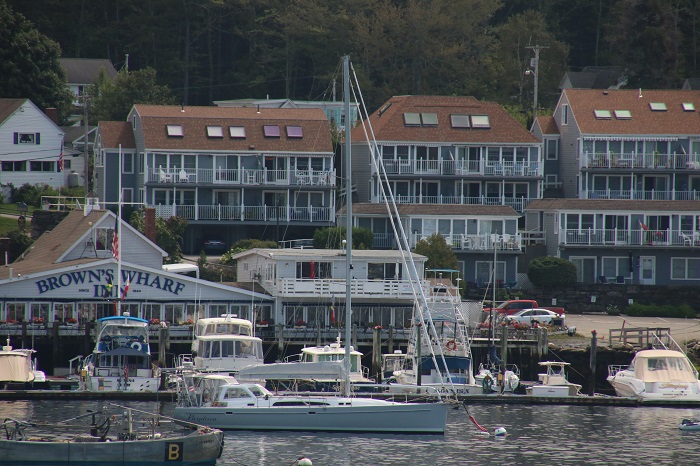 Every night the sunset over the far side of the harbor is beautiful.  Of course, last night, not so nice as the remnants of Ida descended on us. 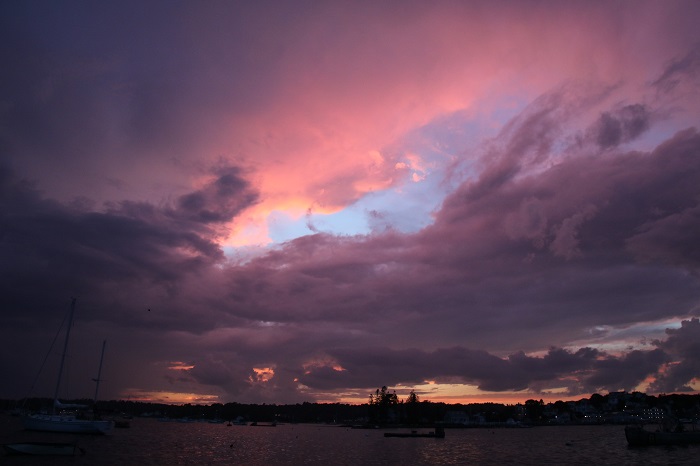 However, 24 hours later the sun is out and while it’s still plenty windy, I can see how tomorrow will likely be a wonderful day as we cross the Gulf of Maine.

While I will miss Maine, it will be nice to be back home.

For sure, Mila our Chris’s and Melody’s husky will be happy to see me.