Well, I am finally back in Belfast and aboard Pandora after three weeks back home.  Since returning from the Down East Rally, I’ve been hugely busy with Salty Dawg stuff and have been spending a lot of time interviewing applicants that are flagged to me as possibly having limited blue water experience.   I want to be sure that they have a good feel for what they might face and plan to invite  crew aboard that know what sailing hundreds of miles from land is all about.

There was also considerable discussion about how we were going to handle the question of vaccine requirement for those making the run south.   After months of factfinding the Board decided that the most prudent approach to insure the safety of all at sea, was to require vaccination for everyone.   Additionally, the islands that we plan to visit are really having a tough time with the virus and with sometimes small numbers of their people unvaccinated, it would not be fair to bring yet another unvaccinated person to their homes.    Additionally, most islands are taking a very hard line with those that are unvaccinated visiting and they are requiring testing and quarantine until they are certain that all is well.

I do expect that event the vaccinated will also continue to be tested before visiting or moving to other but, as of now, if their test is negative, they are free to go.   With breakthrough infections popping up among the vaccinated, it’s hard to say how this will all play out in the coming months.

As of today, Biden has announced that boosters are recommended and, Brenda and I will be lining up to do just that as soon as we are given the all clear.

Given how polarizing and political this issue has become here in the US, I had no idea what sort of blowback we might encounter.   Personally, I felt that most, if not all, cruisers were probably comfortable with the “jab”, but did wonder what might happen when the announcement was made.

Happily, there has been virtually no complaints about the plan, very good news.

We are getting a lot of applications for the rally and the recent webinars on Antigua and the Bahamas were very well attended.  It looks like we are on course to have a larger rally than has been the case in recent memory.   Fingers crossed that there will not be any surprises as we get closer to departure in early November.

So, here we are in Belfast for a few days with our son Christopher and his partner Melody.  Brenda and I are focused on giving them a good feel for what cruising Maine is like.  Wish us luck.

Our arrival in Belfast coincided with the mysterious appearance of a huge rubber duckie named Joy.  She?  He?  Im going with She and she, has been making a tour of the harbor in recent days.   Many have been taking her photo.  Me too. 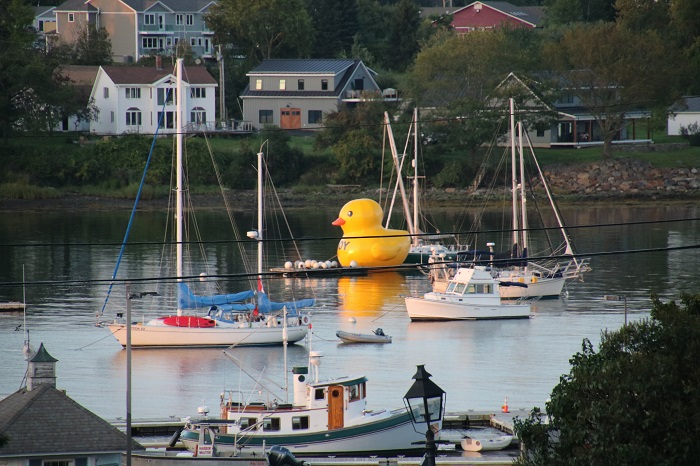 It seems that she recently made her mysterious appearance at the head of the harbor, where we are, and then drifted down and tangled with some of the moored boats.

This morning, under the influence of coffee, I decided that Joy needed to “return to her roots” at the head of the harbor.  The fact that we wanted to have her closer to Pandora had nothing to do with the decision to “rescue” her at all, I assure you.

I approached cautiously so as not to alarm her, lifted her moorings and off we went. 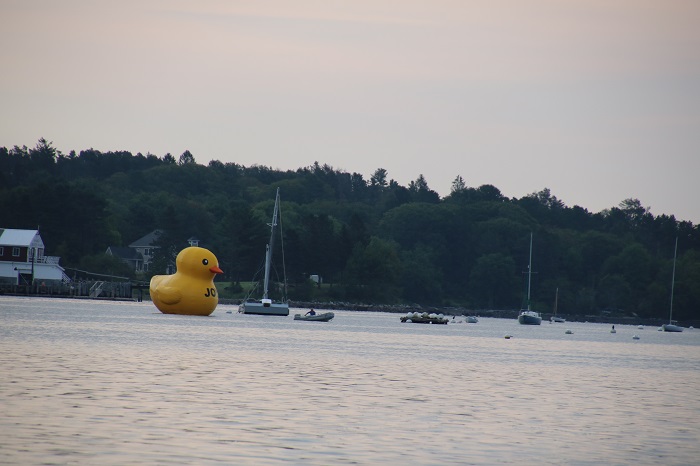 In spite of the fact that Joy has been moving around, it turns out that she has not one but two moorings to keep her in position.  They proved too heavy for me to hoist into the dink so I suspended both of them below the dink as best I could to prepare for Joy’s voyage. 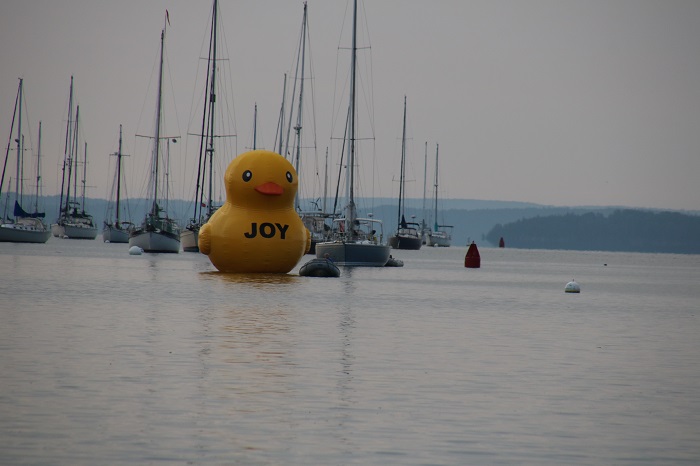 The going was slow, as I did not want to alarm her.

Joy proved to be a willing, if not enthusiastic traveler as she followed obediently behind Hope.   Hope you say?   Hope is the name of our dink. 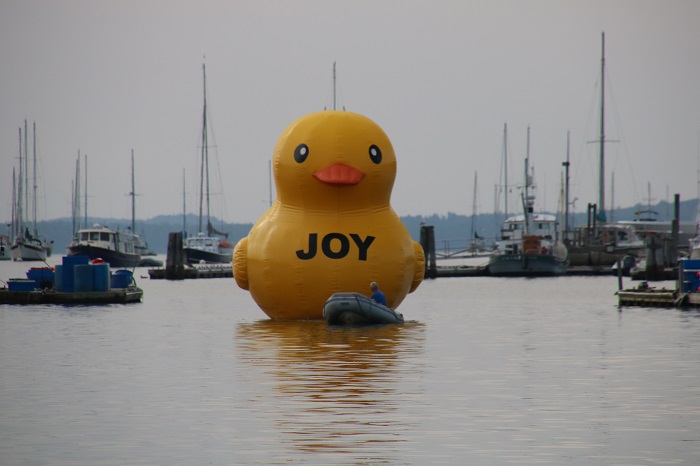 Get it?  Pandora’s dink called Hope?

So there you have it, as long as there is Hope,  there’s Joy.  Well, at least there’s joy going for a ride. 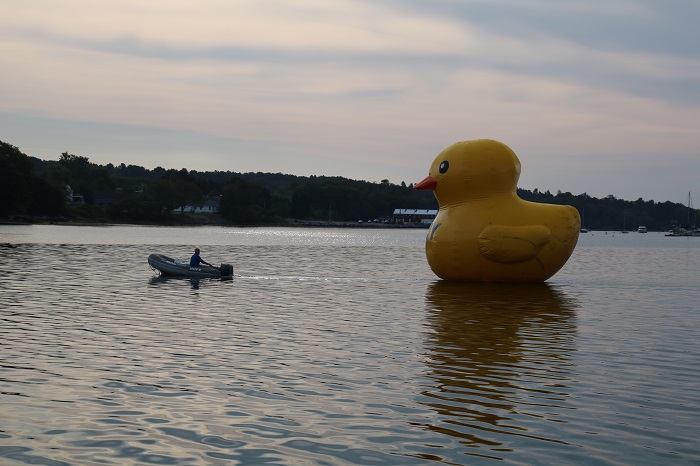 As she arrives at her new home, Joy continues to pursue Hope as we all do. 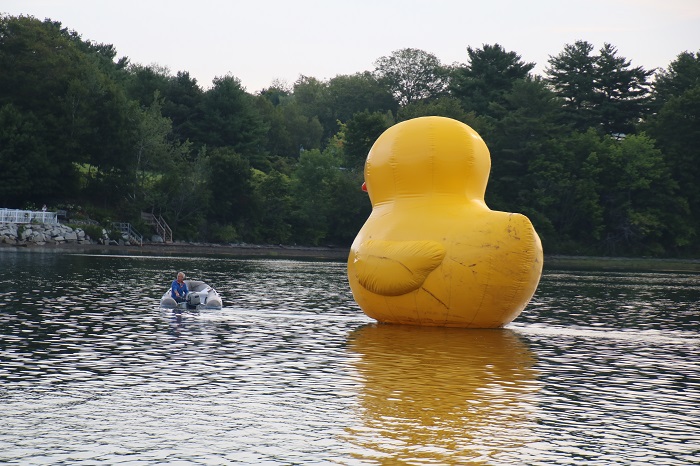 So, Joy is now among us, as it should be. 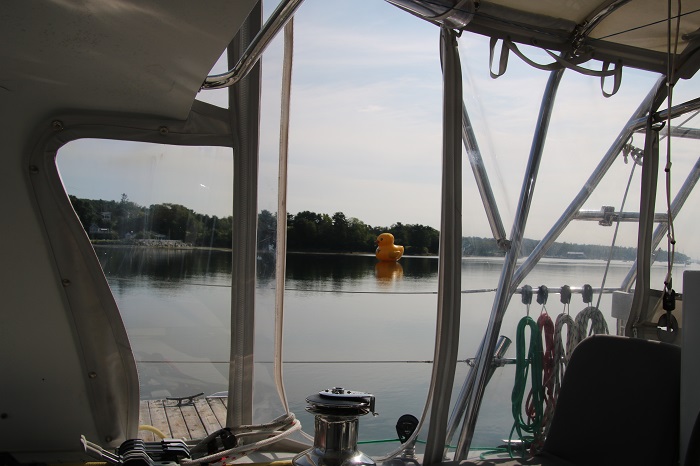 Guarding over us in the “hope” that we will enjoy Maine. 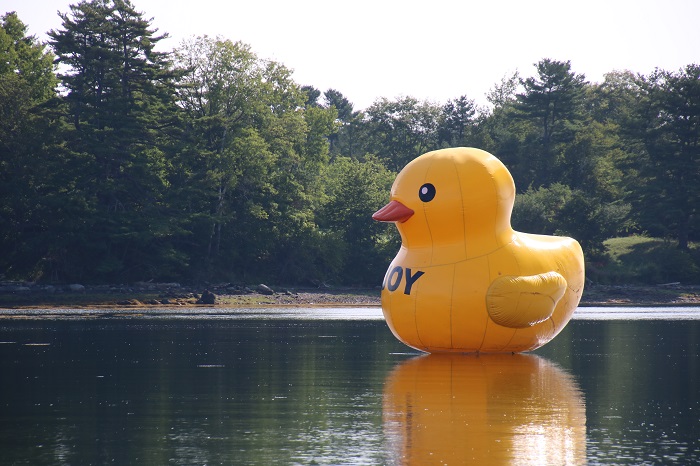 It’s a beautiful day here in May and I am happy that I was able to bring a  bit of Joy, no, she’s HUGE so she’s brought a LOT of Joy into our lives.

I guess that it is safe to say that where there is Hope, Joy will follow.

That’s all for now…