The last stop on the “mini-cruise” that I organized for the Salty Dawg Down East Rally was Belfast Maine, home to Front Street Shipyard and some remarkable boats.

I can still recall when we first started visiting Maine with our Tartan 37 Electra back in the 80s, Belfast was a place that had been best known for it’s smelly chicken and sardine processing factories and not really as a place to stop on a cruise.   Last time Brenda and I visited Belfast was in 2011, ten years ago and by that time the chickens were long gone and it was actually a nice place to visit.

Checking a decade old post about that last visit brought back some nice memories.  Check it out.  To that point, I can’t believe that I began keeping this blog in 2007, 14 years ago.  And, even crazier, once I push the “publish” button, this will be my 989th post.  I guess I should think of something to do to celebrate my 1,000th post as that’s only a handful of posts away.

Anyway, back to Belfast.  Ten years later the town is still charming and the  harbor, exposed to the south, still acts like a funnel when it pipes up from the south, not so great.  To that point, I was on the phone with Jonathan, the dockmaster at Front Street Shipyard yesterday and he told me that it’s pretty bumpy out in the harbor today.  Yup, wind’s out of the south.  Glad I’m not aboard with Brenda.  She would not like that at all.

A lot has changed in Belfast over the last decade with perhaps the most notable being the emergence of the Front Street Shipyard that rose up quickly on the grounds of an abandoned sardine factory.  They are now a major employer, known for their expert craftsmanship on all manner of boats, perhaps most notably the “big kids”.

For this last stop on our mini-cruise, I was lucky to arrange a tour of the Ship Yard for the group.  It was fascinating.  Big group of Dawgs. 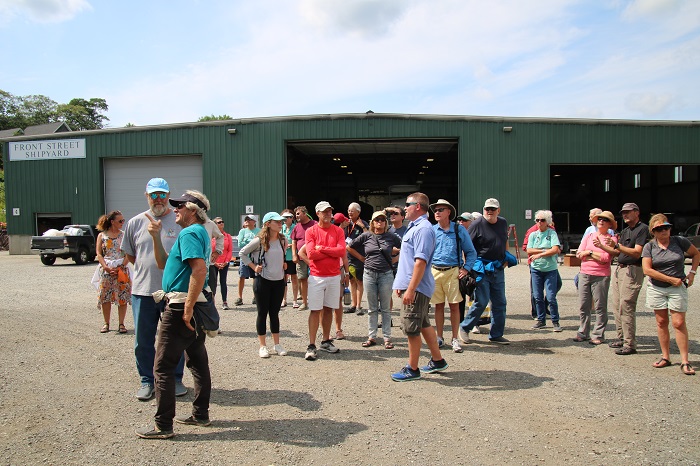 The yard’s largest lift can handle nearly one million pounds.  It is one of the largest on the East Coast with 16 wheels. 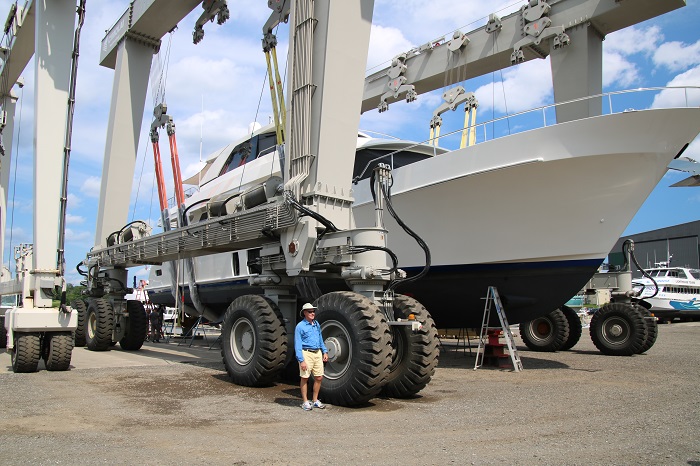 It had better be strong to pick up this tug.  Her props are huge, about 8′ in diameter.  Each of them can rotate 180 degrees so she can move in any direction and is steered with a joy stick, not a wheel.   We were told that she had failed a recent survey and needed to have her stern re-plated.  Hold that thought about how they fabricate the plates for a moment. 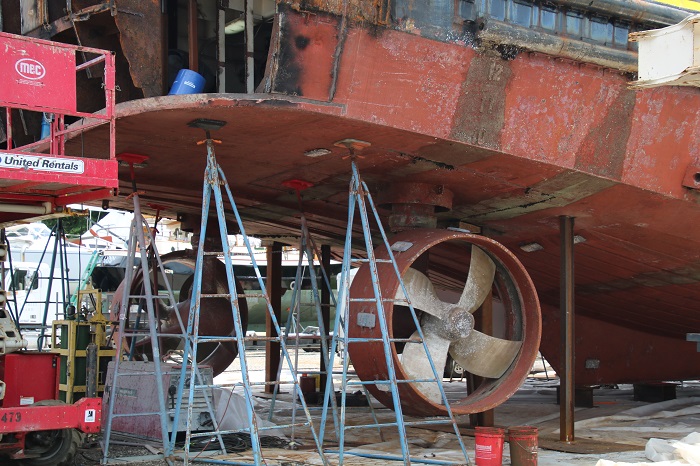 Big is the theme at the Shipyard.   The door to one of the buildings and they are all plenty big, is over 80′ tall. 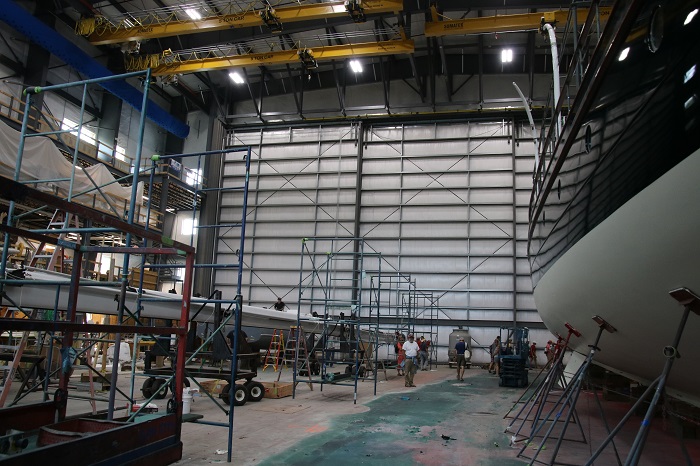 That door is tall enough and the shed big enough, to fit this 126′ steam yacht with room to spare. 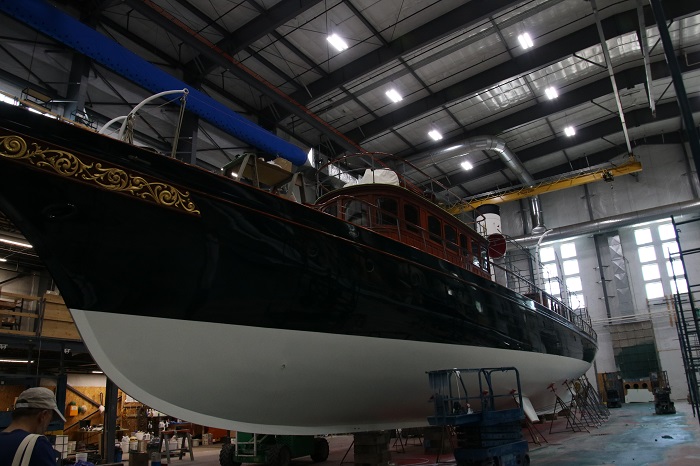 She is Cangarda, the last surviving steam powered yacht in the US and one of only three surviving worldwide.  Built in Wilmington DE in 1901, she eventually fell into disrepair and in the early 1980s a restoration was attempted but eventually abandoned for a lack of funds, and she sunk in Boston Harbor.  I’m not sure how she got there, but she ended up on the West Coast and received a full restoration at Rutherford Boats that began in 2004 and was completed in 2010.   She was in pretty rough shape when they began the project.   Like, no kidding, totally rough… 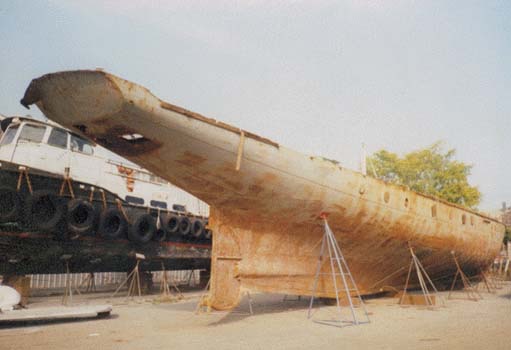 It’s hard to imagine all that went into such a detailed restoration when you consider what they had to work with.   Most of the materials in the boat are new now. 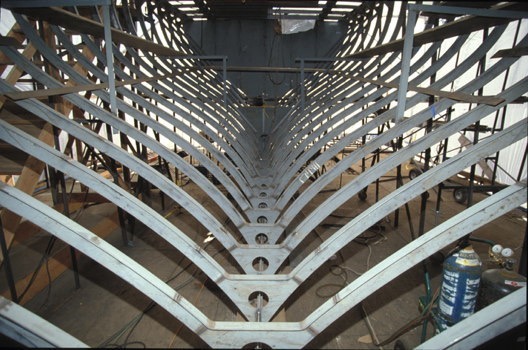 However, she still has her original steam engines that were shipped to Europe to be completely rebuilt.  Really impressive work. 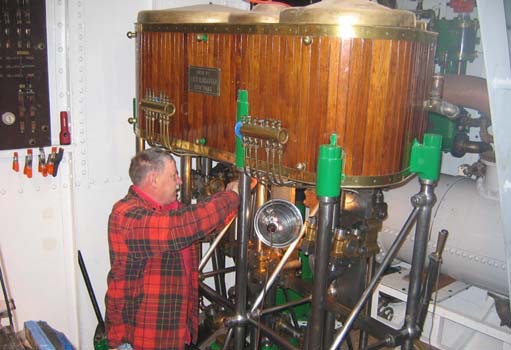 While she is still true to her heritage as a lone survivor from the Victorian age, having hosted many world famous dignitaries, she is modern in ways that count with stabilizers and touch screen displays for her complex systems. 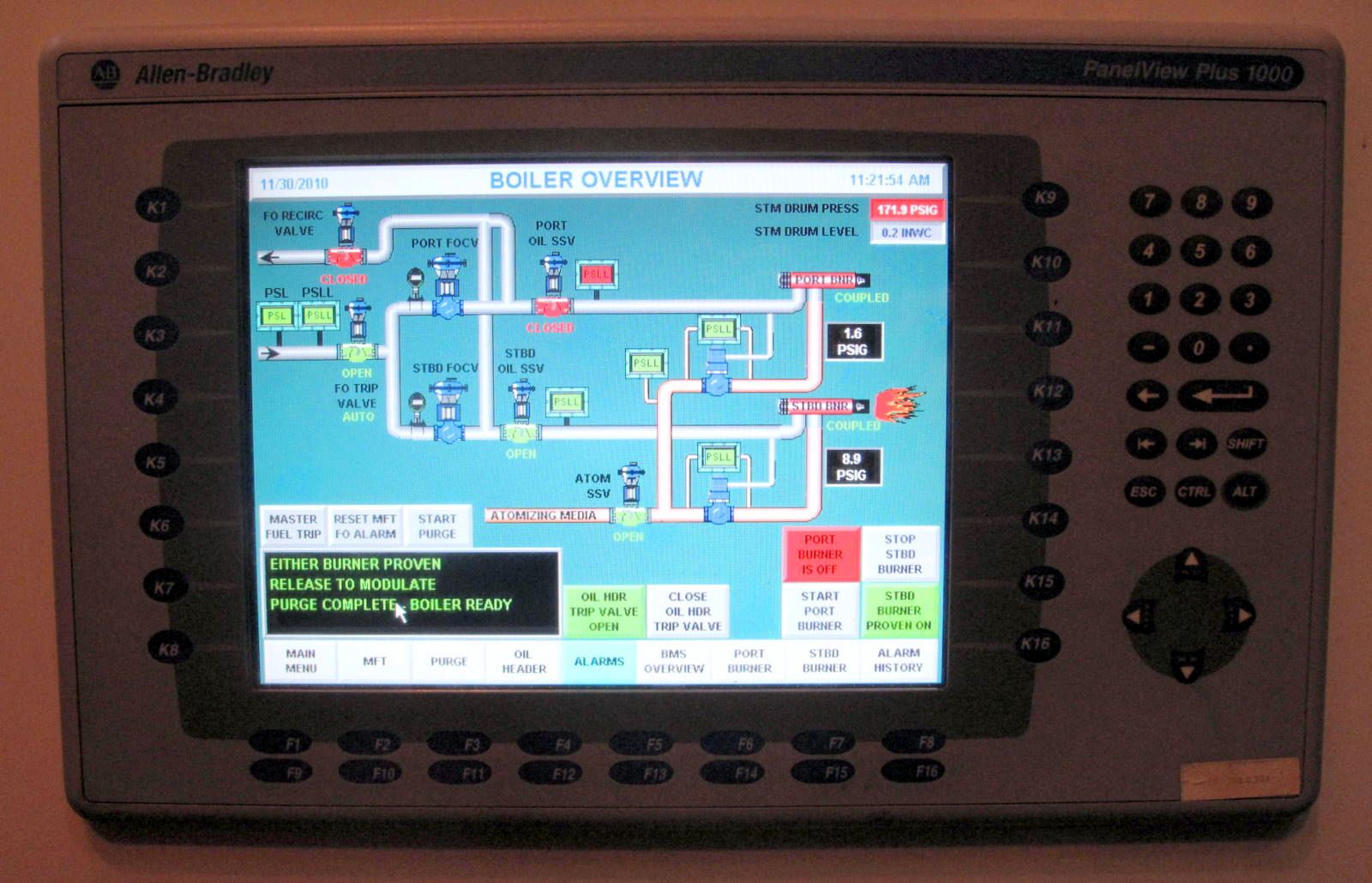 I can’t imagine how much it costs to keep a yacht like this in prime condition.  It is reported that it took a crew of 30 8 years to complete the restoration at a cost estimated at $12 million.   It seems that her new owner, Robert McNeil, a venture capitalist, was able to look beyond her state of disrepair and had a vision of what she could become.

When the restoration was completed after 8 long years, what a transformation. 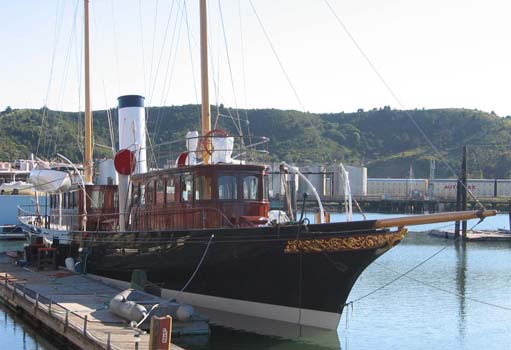 I believe that she returned to New England waters on her own bottom, via the Panama canal, and since returning she has been cruising the North East and often wintering at Mystic Seaport where I saw her on a number of visits.   Originally she was coal fired but was converted to a diesel boiler during the restoration.  In addition to her primary steam engine, she has other smaller steam engines, I think a total of 5, that run her many systems.

What a magnificent vessel.   She still looks like new a decade following her restoration.  I so wish that I was able to get a tour inside her.  Interestingly, her spotless white bottom is nearly unmarred by thru-hulls.   She is as narrow as she is long. 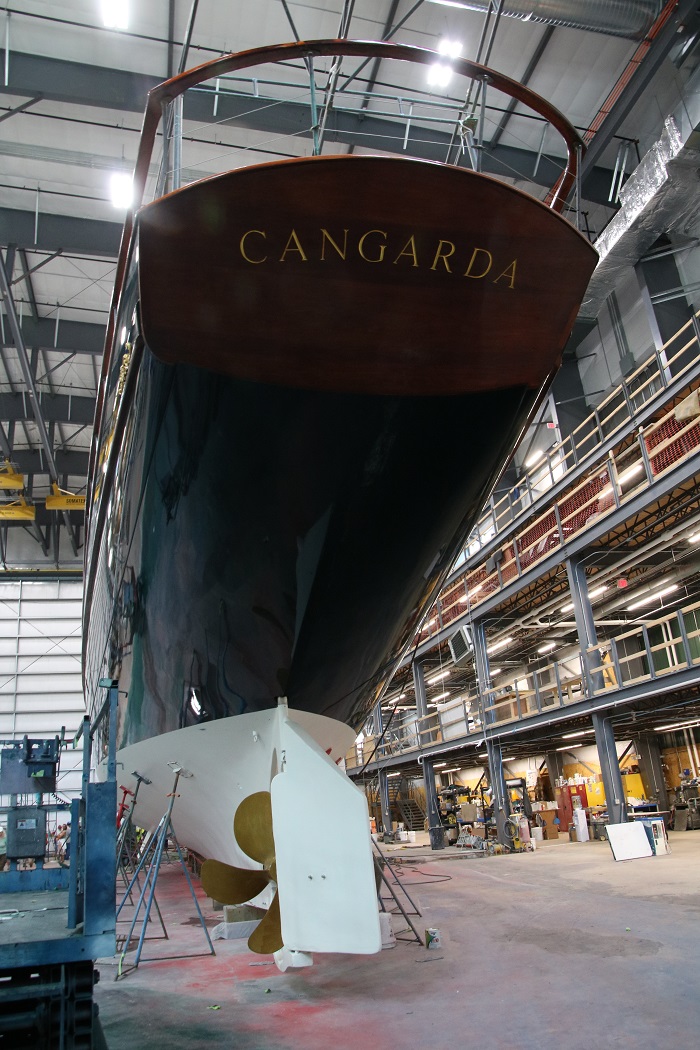 Her slow turning prop is huge.  Craig gives some sense of scale. 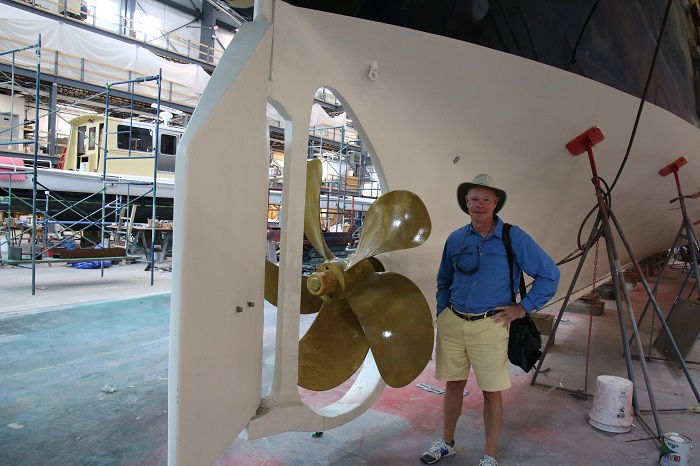 Cangarda’s future is now in doubt as Robert McNeil passed away on July 23rd the day after our group saw his boat in Belfast.   It will take a very special owner, with really deep pockets, to see what he saw in this remarkable yacht.

Feel like a steam yacht of your very own?  Hang around to see if she comes up for sale.

Clearly, Front Street has the knowhow to fix and maintain just about anything.  Along with huge lifts and some amazing stuff like huge table saws and all sorts of tools, they have perhaps the coolest machine of all.   A CNC pressure water cutter.

It seems that water can actually cut steel.  And Front Street has a machine that will smoothly cut through 9″ of stainless steel.  Water cutting steel?  Who knew?  It is an amazing machine and I was lucky enough to see it in action.

Note the operator on the right for scale. I was told that he is the only guy at Front Street that even knows how to operate it. 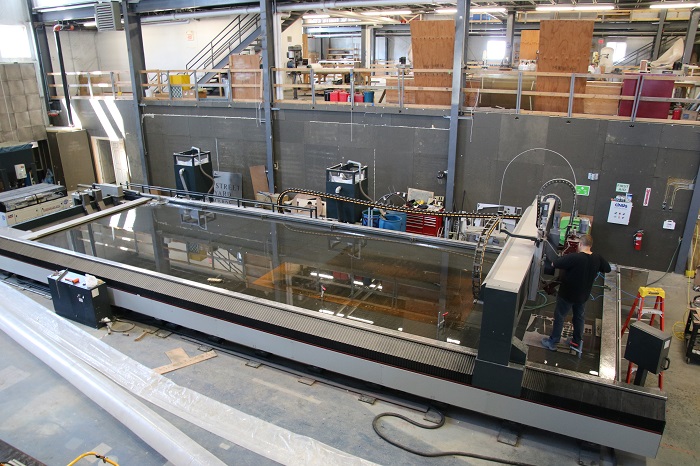 Back to that tug boat with the gimpy stern plates.  It looks like they have some steel near the cutter ready to cut into the exact shape.   The yellow machine on top of the pile has suction cups so it can be picked up and deposited in the “pool”. 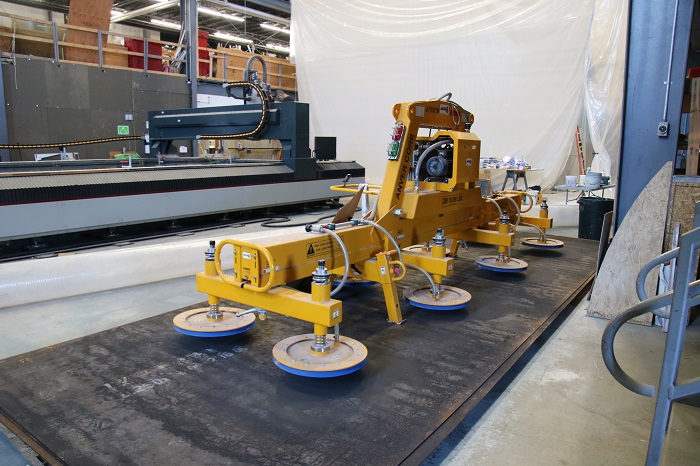 This suction thingy is attached to a 10 ton crane suspended from the celling.  Heavy plate steel or not, this would be a delicate operation, I expect. 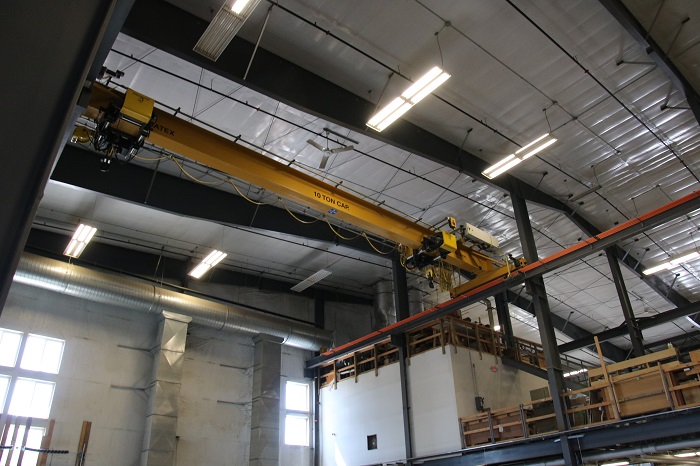 The shape of the final object to be cut is put into a computer so that the cutter head can be programed to move in precise ways and make the cuts.

The unit can do some very intricate cuts and fortunately it was operating when I visited. 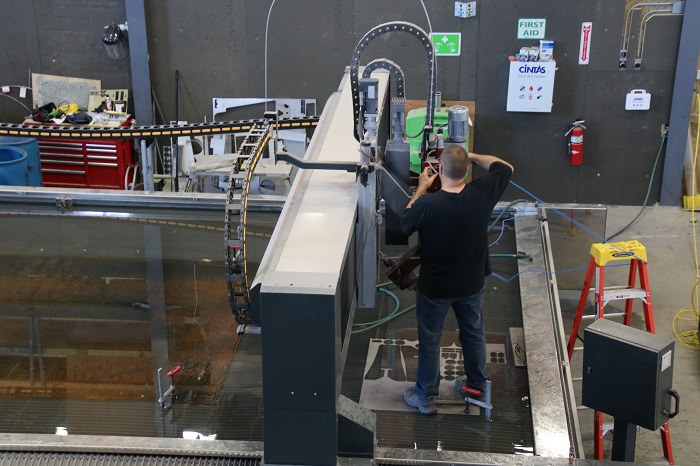 When everything is ready to go, the operator steps aside.  Good move as I expect that a sneaker would a lot easier to cut than 9″ of stainless.  That said, steel toed safety shoes.  Hmm…

The actual cutting operation doesn’t look like much and is pretty quiet. 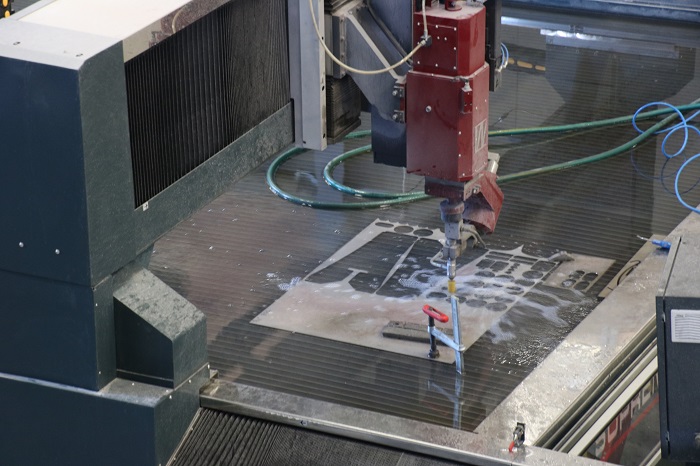 At the end of the process, the cutting head puts out an impressive burst of vapor, about the only evidence that anything important has actually happened. 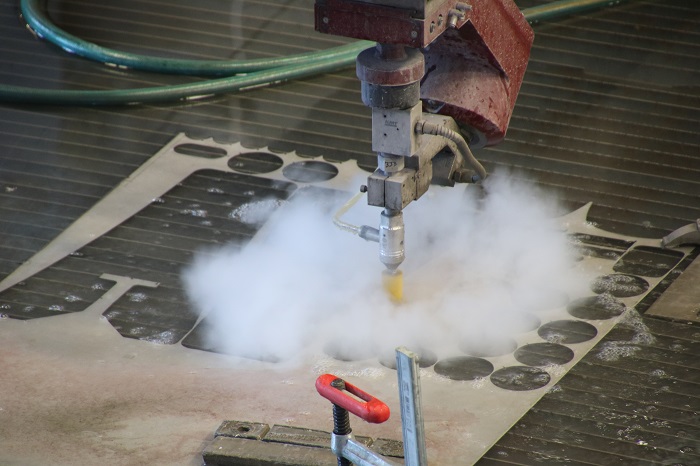 I can only imagine what it must cost to have them make a “special something” with that machine.  It’s so cool I almost want something to break on Pandora.  No, never mind but it is awesome.  I wonder if I could at least have them make me a paperweight?

I won’t bore you with an endless litany of awesome yachts that they have in their care except to show a few.  I was taken by this lovely trawler.  She’s actually wood but you have to get really close to see anything wood-like to give that away. 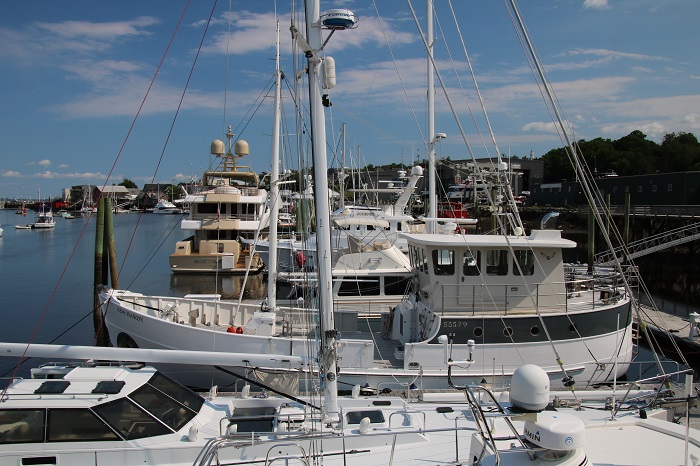 She has really lovely lines. 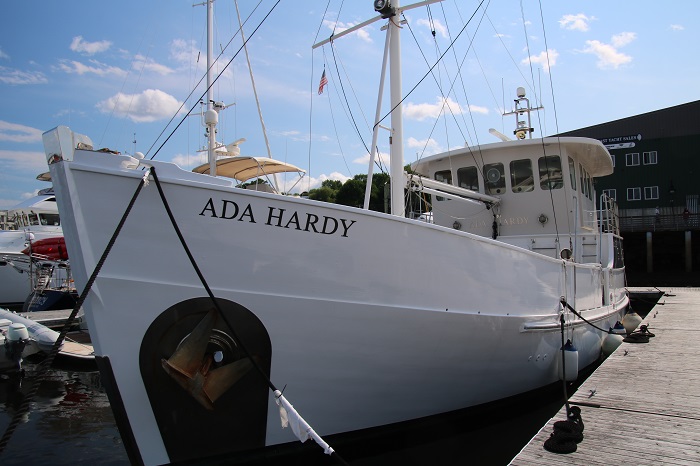 And, tied up on the city dock was this beautiful steel trawler.  She’s for sale. 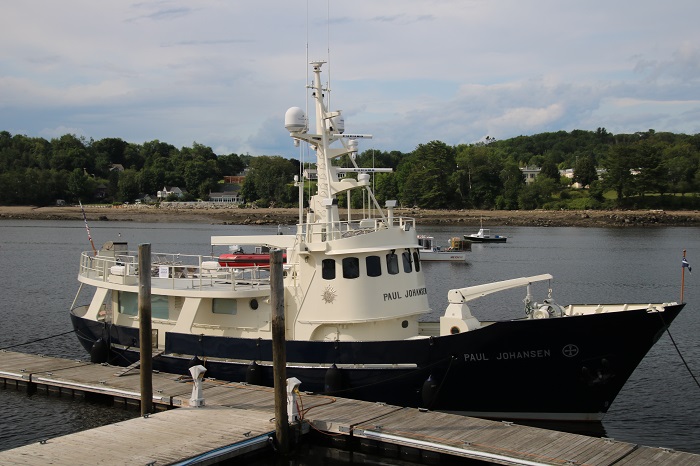 Ten years later, Main Street is still lovely with beautiful brick buildings lining the way down to the waterfront. 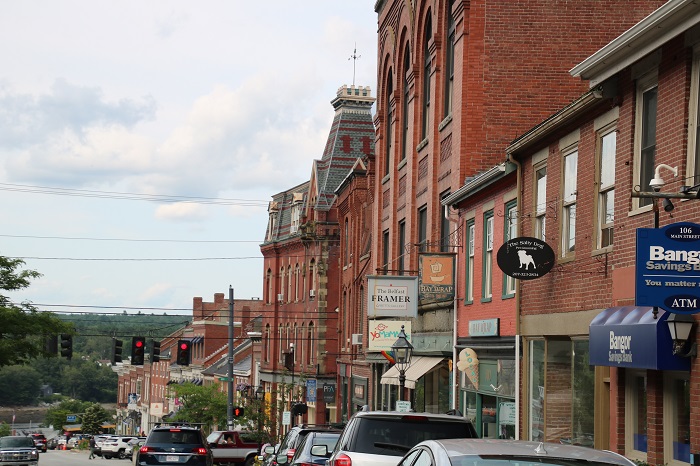 There’s something for everyone and even a knitting store and some nice book shops that I am sure will interest Brenda when we rejoin Pandora next week.

And in the spirit of the Salty Dawg Rally, there is even the Salty Dog Pet Grooming salon.  Belfast really does have EVERYTHING! 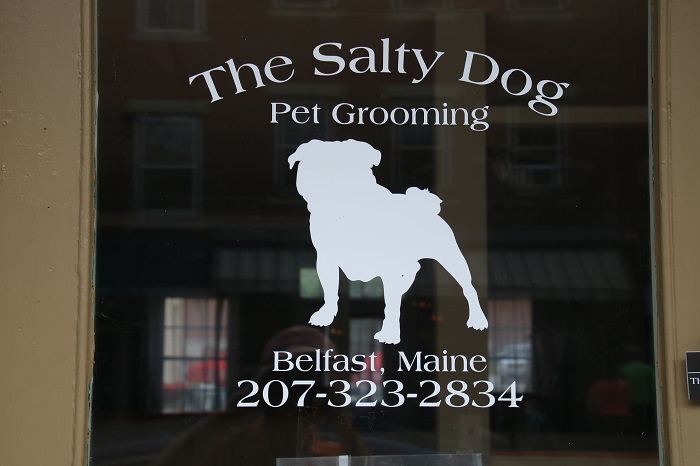 But wait, there’s more and, in particular, the city is currently home to a very special yacht, another legendary vessel, the ex-presidential yacht Sequoia.   She too has a remarkable history having served 8 presidents.

In her glory days. 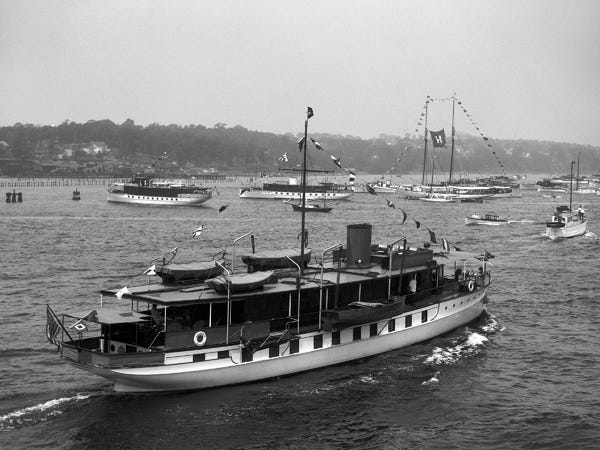 With FDR aboard…  It seems he was having a good day.  He even had an elevator installed to accommodate his wheel chair.  Johnson had it removed when he used the yacht. 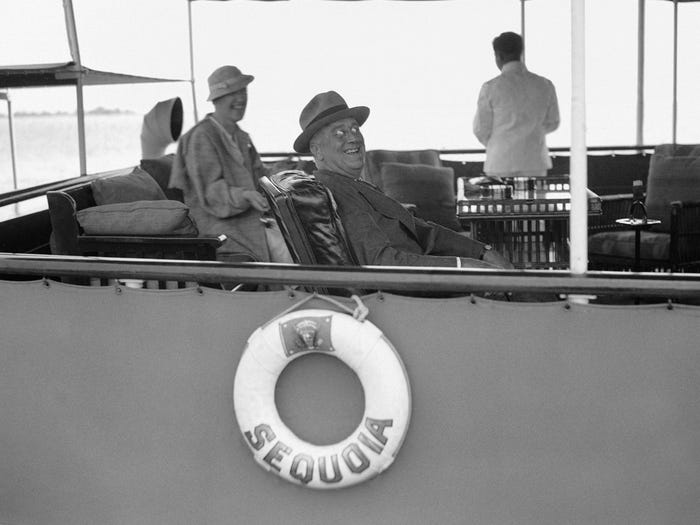 JFK celebrated what would be his last birthday aboard in 1963. 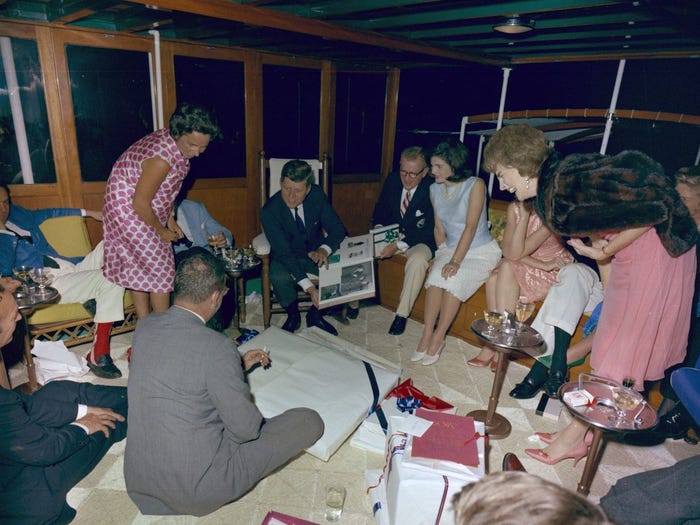 Sequoia was built in 1925, was acquired by the US Government in 1931 and converted for use as the presidential yacht in 1933.  She was sold in 1977 as part of an austerity move by Jimmy Carter.

Sadly, Sequoia’s story has been checkered since she was sold passing through some 8 different owners.  I recall hearing about her sale by Carter who didn’t see that it was right to spend taxpayers dollars on such a luxury item.  In recent years she sat badly neglected in Virginia, nearly her final resting place.  This video shows how far she had fallen including becoming a home to a growing family of racoons.  After years of legal wrangling, last fall Sequoia was finally loaded aboard a barge for her journey from Virginia to Belfast. 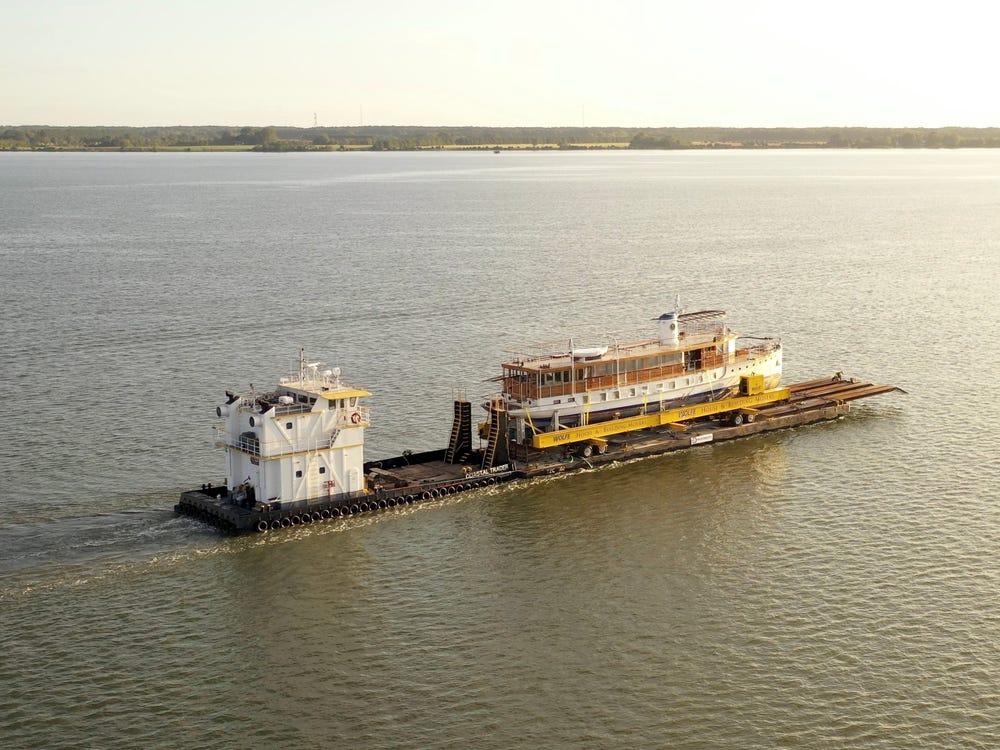 She is now housed, under cover, at the French and Webb yard where she  is being restored.  It’s hard to even tell that this is the once regal Sequoia under her cover. 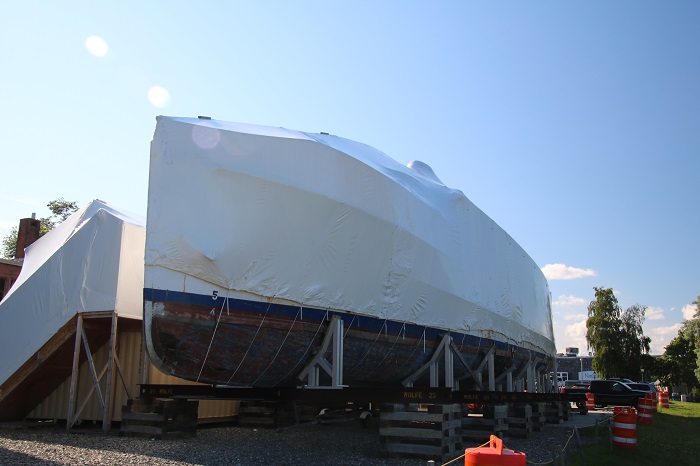 But a view of her distinctive stern clearly gives away her Trumpy heritage. 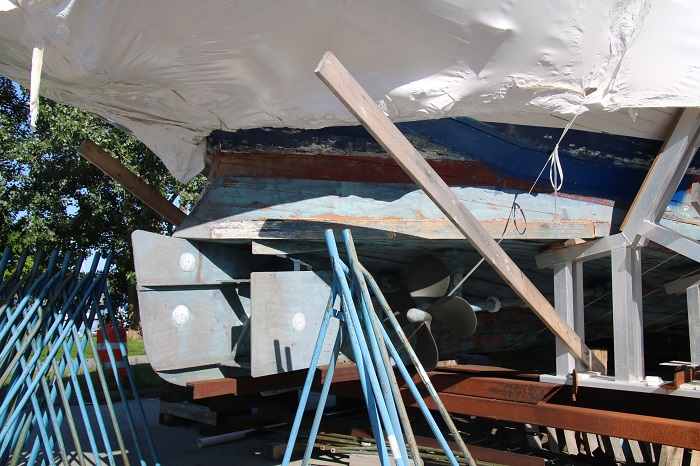 She is now being funded by a group of investors through Equator Capital who’s mission is rescuing and preserving assets that are significant to US history.  I guess that would suggest Sequoia is in good hands.  While there’s a long way to go, we should be optimistic that Sequoia will sail again.  I wonder if they might be interested in Cangarda?  No restoration required.  Just a thought…

This short video of her moving to her new “home” in Belfast from VA and has some impressive moments, especially as she is towed past the Statue of Liberty. Well, I guess that’s about enough for now.  Belfast, a place worth visiting and if stuff breaks along the way, and it will as IT’s A BOAT after all, I know just where you can have her fixed.

Having your boat worked on in Belfast, perhaps at Front Street Shipyard, would make sense as it’s already the sometime home of some really amazing boats.

Heck, maybe they will even use their totally cool water cutting machine to make some parts for you.  If they do, I’ll bet that they would let you watch.

And as they say, “if you have to say How Much, you can’t afford it.”

2 responses to “Belfast Maine, occasional home to some amazing boats.”