What next for Pandora?

We are well into spring with the yard greening up and the daffodils faded.  Unfortunately, Pandora is still covered and will remain that way for some time as I have not begun working on her.

Actually, it’s not as bleak as it sounds as I have been “gainfully employed” in my continued quest to build a robust cache of “cruising credits” that I can redeem for time aboard Pandora this summer in Maine and next winter in the Caribbean.

And speaking of “credits”, one big project that I mentioned some time back, when I showed some rough lumber, is a new dining table.  The wood was so weathered after years in a neighbor’s shed that I couldn’t even tell that it was cherry, my favorite.  I thought walnut until I ran it through the planer. 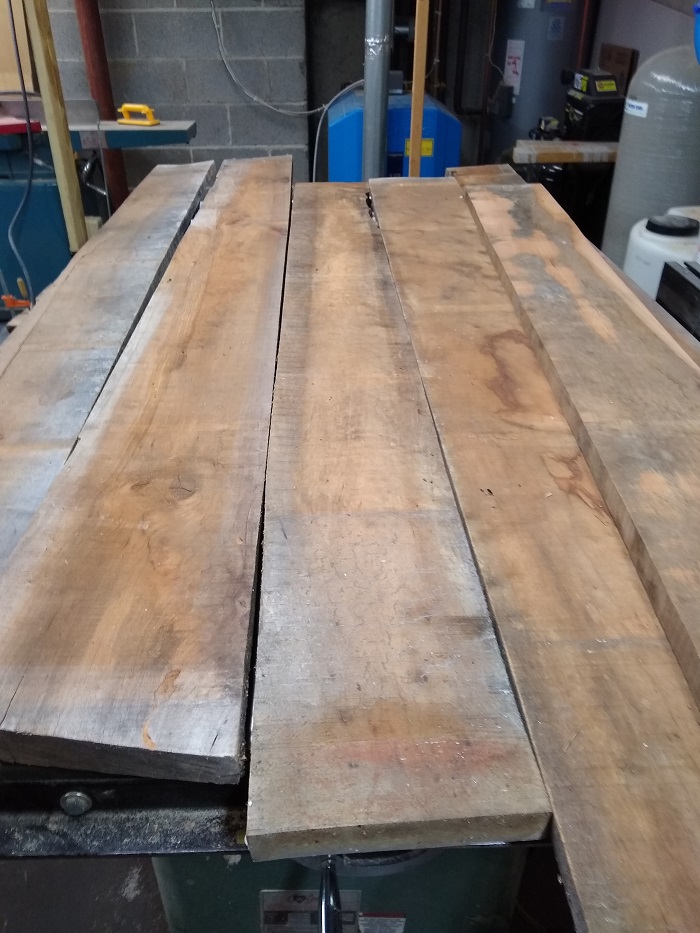 So, now less than two months later, magic, a new kitchen table.   It took longer than I would have expected as I wasn’t working from plans and it involved some techniques that I didn’t know and some new power tools. 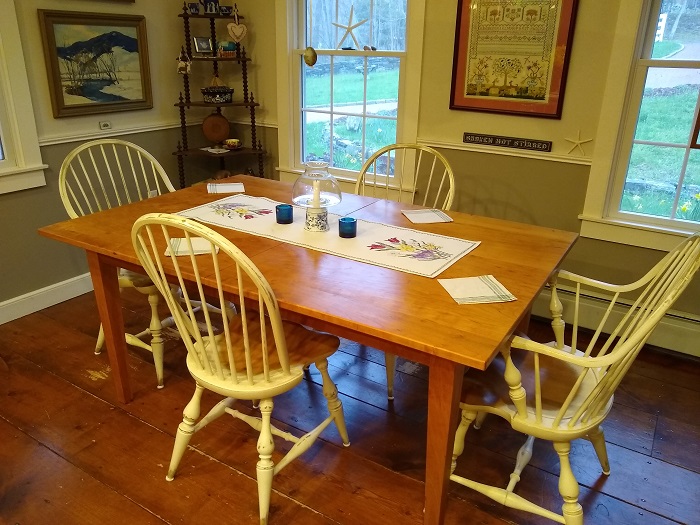 The table can also be extended with two 18″ leaves to make it really HUGE, over 90″.  For years, Brenda has been very focused on having a table that could be expanded to accommodate 10-12 diners although it’s hard to imagine a time when that will again be possible.  And after year of relative isolation, I’m not sure I still know that many people.  Friends or not, Brenda has her table.  Cruising credits in the bank.  Check!

With the table project behind me, we’ve also decided to have our front porch and walk, replaced with something new, field stone and blue stone, instead of the brick one that we inherited.  Sadly, as the mason dug into the project, we discovered that the bricks had near 18″ of concrete under it.  I guess that the porch was covered over at least twice before with subsequent layers of brick, concrete and cement.  What a mess.

Getting that out has proven to be as quite a job.  After the mason we hired messed with it for a day, we had to call in the big guns, this digger machine, the biggest one that they could realistically fit so close to the house.  In spite of being very powerful, we are now into the second day of the demo part.   It’s slow going as he had to be careful not to damage the foundation to the house as he wrenched it out.

He’s farther along than this photo would suggest but the progress is s-l-o-w.  So much for staying within budget for the new porch. 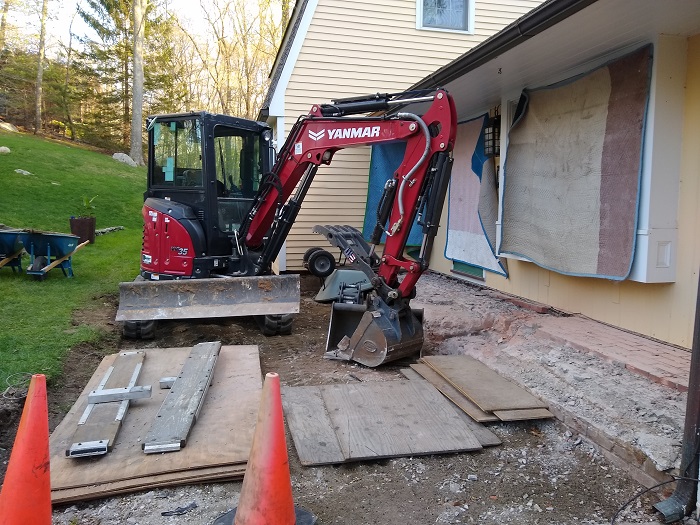 But, as I am a card carrying member of the “cup is half full” club, I’d prefer to look on the bright side of this.  I’m prepared to rationalize that the extra expense on the patio will be offset, I hope, for what we would have had to pay for our new kitchen table if I had not built it myself.

And, as a good amount of the wood I used was given to me by a friend who had it in her attic for years, materials for the whole project cost less than $500.  Well, that’s if you don’t count the new tools that I purchased to complete the project that cost more than the project itself.   But wait, the cost of buying tools doesn’t count as they can be used for other projects.   Besides, Brenda’s list still includes three bar stools.  Yup, I can rationalize with the best of them.

So, while Pandora sits on the hard, covered from the elements, I am plenty busy putting credits in the cruising bank.  Perhaps I’ll put together a scrapbook that I can pull out and review with Brenda come fall before we head to the Caribbean for the winter.   “Easy Bob, that might just piss her off.  Just keep working through her list. ”  Ok, I guess you’re right…

As I write this the “digger guys” are using a gas powered saw to cut into the remaining part of the slab so they can pull it out with the machine.  That’s the sound of money running full speed away from me.  But, I have to admit that it’s not as loud as the flushing of “boat dollars”.

Nope, for a number of reasons, I am not in much of a rush to put Pandora in the water.  With Memorial Day less than a month away, I can still remember the scramble in my “pre-retired” life, rushing to get our boat ready for the long weekend, the official beginning of the summer sailing season.  Now, as a retired guy in a pandemic, most days seem like every other day, so I guess there is less urgency.  Besides, I have little interest in being out with the Memorial Day hoards.  We will see how I feel about being “on the hard” when the weather is warm and Pandora is still sitting in the boatyard all by herself.

As I have mentioned many times, I am very active with the Salty Dawg Sailing Association and while I was planning to cut back on my time commitment somewhat, it seems that will not be happening anytime soon.

Recently, the Rally Director resigned and I agreed to take on that role as ACTING rally director, in addition to my work as Port Officer for Antigua.  I say ACTING as I haven’t committed to the position yet so there’s still time to escape.  Besides, I don’t have to worry about them finding someone to work for less as my total fee is just a few “at-a-boys”.   So far, so good, on that score.

I am enjoying this new role but the jury is still out on whether I want to continue to invest so much time in the group as it is a big job that has burned out a number of folks before me and I was pretty busy already.  I am somewhat optimistic that there is a way to simplify the position so it’s more manageable.  Time will tell.

For the moment being Rally Director isn’t all that tough as the fleet is small with about 8 boats leaving from the US Virgins, headed to Hampton VA.  After the balance of the boats depart in a few days I will not have much to do to support them as other volunteers take over at that point.  If you’re curious and want to follow along, check out this link to follow along with their tracks as they make their way north to the US.  It’s still early in the season so the weather is a bit unclear and might get rough as they reach the US coast.   However, everyone is working with Chris Parker, our weather router, to avoid just that.

The next rally is the Down East Rally to Maine coming up in July, so I will also handle that one.  I expect that rally will be about 20 boats and I am really looking forward to being a part of the group.   I’d love to have you along so how about signing up?  Follow this link to learn more.

As I add all of this up, I am wondering if I can see that continuing to be focused on my “cruising credit” effort may be a bit challenging.

For the moment, at least I can make a list of what I have to do on Pandora to get her ready to head to Maine.  Besides, I don’t plan to launch until late June so there’s still time.

So, what’s next for Pandora?  One thing for sure, I’m going sailing but not quite yet.

When she’s finally launched the next big step will be heading to Rockland and Penobscot Bay, one of my favorite cruising areas.  When I get there perhaps I’ll mix up a rum punch and watch a beautiful sunset like this one on Egamoggen Reach, not far from Rockland. 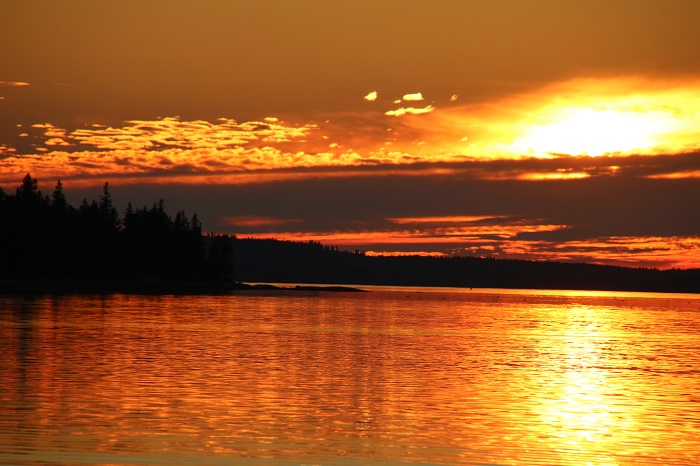 And after some time in Maine, on to Annapolis when I will again try and coax my son’s family aboard for some cruising in the Chesapeake.

And, then to Hampton VA and then to Antigua.  And I am really looking forward to a real Caribbean sunset there too. 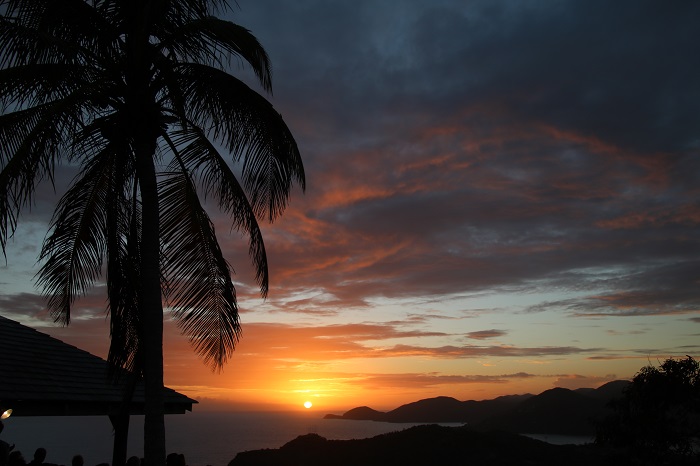 Maine of Antigua?  Which is better?  Hard to say but perhaps with one more visit to Maine and the Caribbean, I’ll be able to figure it out, with rum punch in hand, of course.

So there you have it, the answer to one of life’s most persistent questions.

What’s next for Pandora.

Now you know as much as I know.

One response to “What next for Pandora?”