St. Mary’s Georgia and yet another milestone.

Oh Bob, quit it with the milestone stuff.  Not another one… Sorry, but it’s my blog and if I want to talk about YET another milestone, I can.  So, “what is this one about Bob?”.

Thanks for asking, I thought that you would eventually. St. Mary’s, our last stop before we get to Florida, is a big one for us as it means that we have made it all the way through Connecticut, New York, Delaware, Maryland, Virginia, North Carolina, South Carolina, the dreaded Georgia, with it’s dreaded shallow spots and put nearly 1,300 miles under our keel.  And, that’s a lot of miles when you are only going around 7kts.  Now we only have ONE more state, Florida, to traverse until we head out to the Bahamas.

Speaking of Georgia, we had heard all of this bad stuff about the water being so thin here and that getting through with our 6′ draft was going to be very tough.  Oddly, it wasn’t.  We actually didn’t run aground even once.  And, that seemed odd to me as we ran aground five times in North Carolina, where there’s supposed to be lots of water.  I expect that we did better in GA because we are getting more used to all that goes with the ICW and how to make it through.  The fact that there is a 9′ tide also helps.  Note to self, “don’t go ANYWHERE unless the tide is high enough”.  Having enough water is a lot easier here as there is a big tide with an extra 4-9′ of water for hours each day as opposed to up in NC where the tidal range is only a few feet.  Anyway, we are now here in St Mary’s.

Oh, did I mention that the sun is out FINALLY?  It’s been DREARY, DREARY and very WINDY for days, no, make that weeks, which has been tough.  Cold too.  These pictures, taken over the last few days show just how g-r-e-y it’s been.  Not my favorite mood lighting.   Seeing this view out of the cockpit late in the afternoon a few days ago was particularly unsettling.  Note the green buoy, which was supposed to mark the edge of the channel.  It’s up on the sand, high an dry.  Doesn’t give you a lot of confidence, does it? 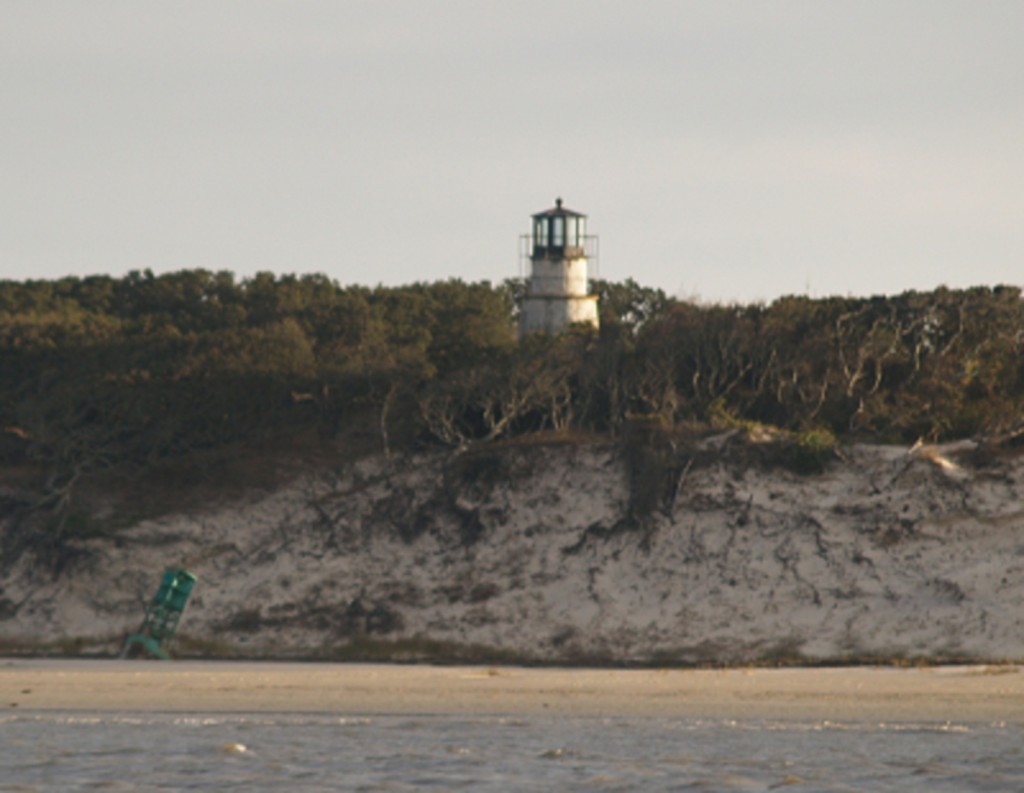 We went past this mark after traversing what was the most distressing piece of water that we have yet encountered on this trip.  It involved heading down a river, late in the day when the light wasn’t good.  (Did I mention that the sun wasn’t out at all and it was cold and windy?  Thought so.)  Anyway, we couldn’t see very well and had to head down the channel, all the way out of the inlet, past several buoys that were really way too small to see easily, crossed a piece of water that was less than ten feet deep (remember that we draw 6′) and made a nearly 180 degree turn to head back up the river.  Oh yea, I should mention that,  as we headed out into this shallow water mess, we were doing 9 1/2 knots over the bottom because of the tremendous ebb tide that was pulling us out to sea.

And all the while, we were within a few hundred yards of breaking seas from the ocean where there were gale warnings posted with gusts to 30kts.  Those breakers might as well have been a few feet as it looked WAY TOO CLOSE.  All that foaming water, shallow depths, fast currents, small buoys…  Unsettling to say the least.   These tiny buoys were also really hard to spot on the grey water in the grey late afternoon light.

Once we were past the last buoy marking the most shallow area,  and turned back to “re-enter” the inlet, that 2 1/2 knot tide that had swept us so quickly toward what seemed like “certain doom”  at nearly ten knots was now against us and we were now just poking along at just over five knots.   And, all this was happening at nearly dead low tide, so the water where we made the turn was so shallow that, had we misjudged a buoy, we would have surely hit the bottom.  And, hitting bottom is not a good thing in case you are wondering.

I was not a happy camper at all. Actually, I think that Brenda was doing better than I was.  With both of us reading the plotter and checking the buoy locations against the paper charts we had spread out in the cockpit, we did finally feel like we understood what we were seeing out in front of us.   I wish that I could show all of this on a picture of a chart that would make the point but it’s a good example of “you had to be there” to appreciate how unsettling it was.  For me, it was perhaps the most unsettling piece of water that I have ever been over.  Well, we made it…  And, as they say, with “no loss of life”.

Yesterday, Monday our trip to St Mary’s was a lot less exciting as we only had a short distance to go and the channels were well marked and plenty deep.  St Mary’s is a big Navy town with their buildings and ships dominating the landscape.   We got plenty close to this sub as the channel put us very near to where it was docked.   However, they don’t want you to be too close so there are plenty of patrol boats to keep an eye on you as you motor by. 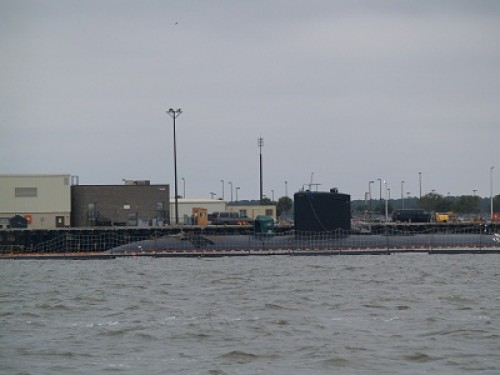 I liked this Navy tug.   Notice how everything is color coded?  Sky, ship, water…All GREY.    Did I say that the sun never seemed to come out for weeks? 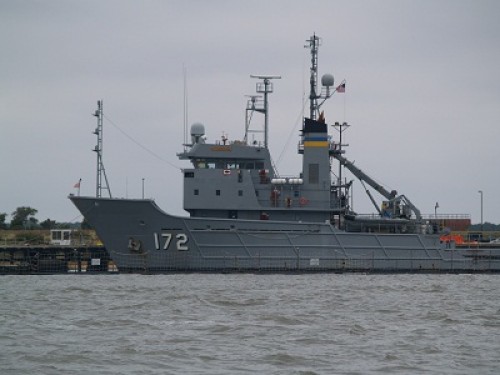 A bit of color here and there though.   This Coast Guard patrol boat came blasting by.   I wonder if they were chasing a bad guy?  Perhaps just going out for donuts and coffee.  Hmm… 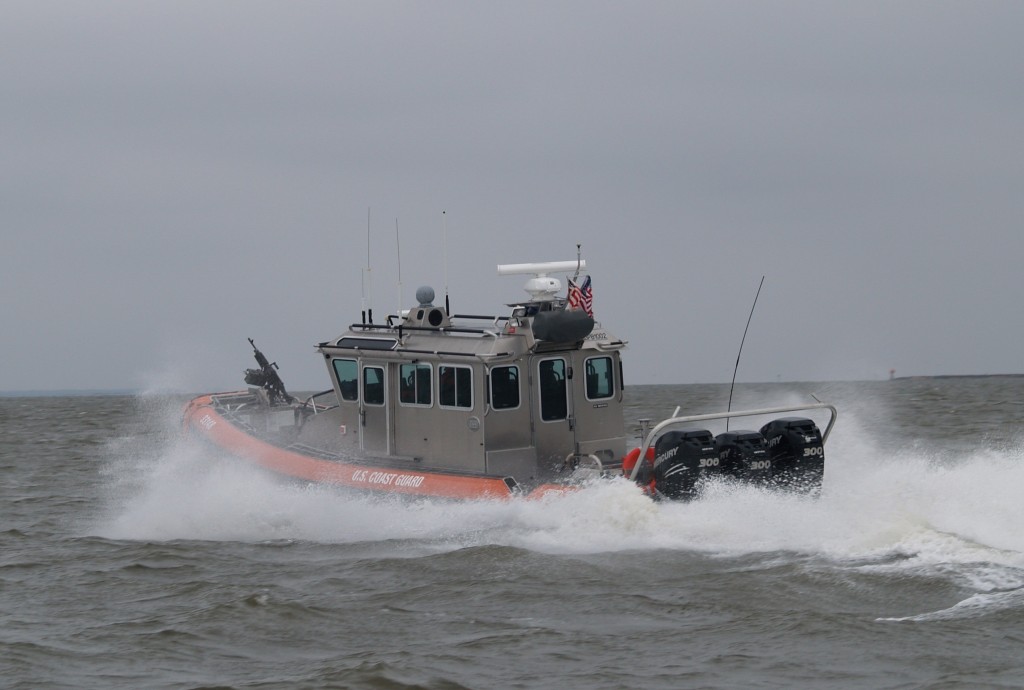 Perhaps to keep the subs from “prying eyes” there are three of these massive buildings on the base.   They are really big and certainly the biggest buildings in the area.  They dominate the skyline. 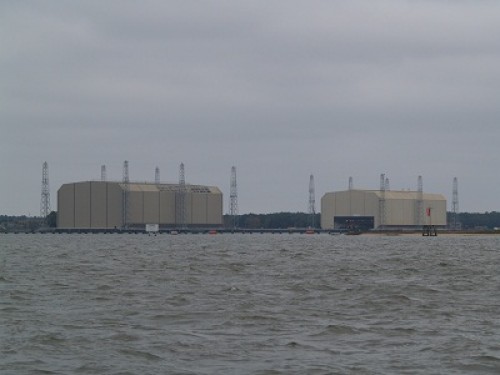 The tradition of cruisers visiting St Mary’s for Thanksgiving began in the 80s and the event now draws about 75 boats and several hundred folks for the big day.  The locals provide turkey for everyone and the cruisers bring side dishes.   And, it’s free except for the bar.  The festivities begin days earlier with a happy hour each night at the host hotel in town.  It’s actually a very quaint old time hotel that looks like it hasn’t changed in 40 years.   No doorman or brass revolving doors here.

Last night we enjoyed catching up with friends and making new ones over a few beers.  I was surprised when I realized that we had already met perhaps half of the 4o or so who were there.   We had a great time.

Today, laundry and some shopping for provisions.  One of our friends has offered us the use of their car.  How great is that?

And, before I sign off.   About that dreary weather.   Not today.   The sun is glistening on the water. 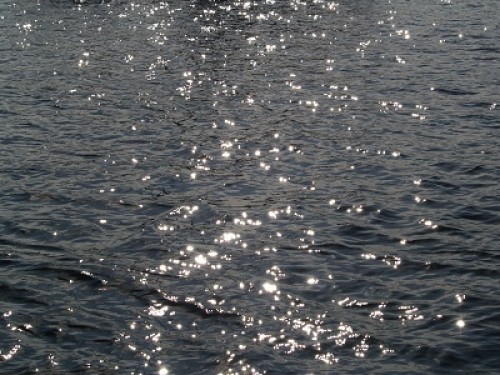 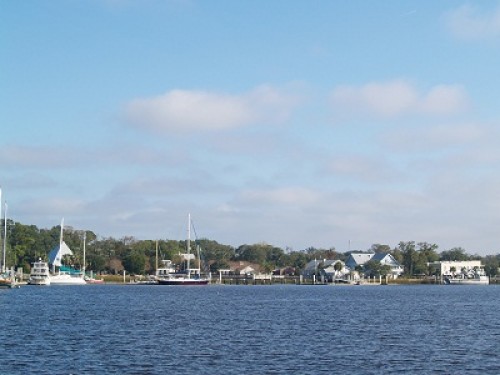 So, that milestone thing?  It keeps me going and makes the trip even more terrific, grey cold, warm sunshine and all.  And there will be plenty more milestones to come.  You can count on it!