Escape from Pandemic: 1,500 miles from St Lucia to the US during the Covid-19 Pandemic

Brenda and I were in St Lucia, aboard Pandora last winter when virtually every island in the Caribbean suddenly shut their borders with the arrival of  the COVID-19 pandemic.  Some cruisers abandoned their boats in the marina where we were and flew home within days but we were unwilling to leave Pandora in the hurricane zone, with no idea when we would able to return.

Recently we shared our story with members of our local yacht club.  There is a link to a recording at the end of this post.   This is a clip of the presentation title page. 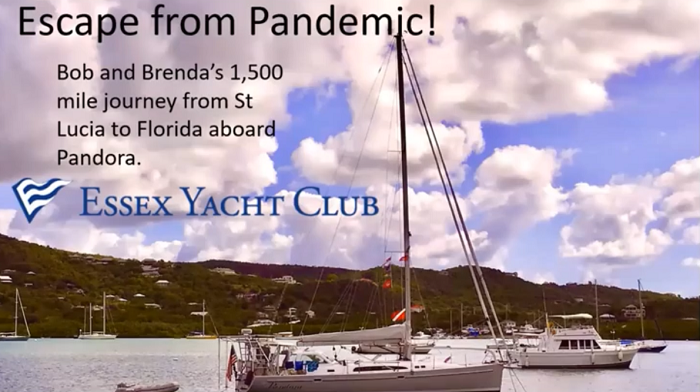 So there we were, in St Lucia and day by day, our crew options were evaporating, leaving us no option but to sail Pandora home alone.  Brenda is not a blue water sailor and while we have been sailing together since the 70s, she had never done an ocean passage beyond a few hundred miles and the realization that 1,500 miles of ocean lay between us and the US was a daunting prospect for her.

When we left St Lucia in late March, the only islands between us and the US that remained open were Antigua and the USVI.  Our first stop after being locked down for weeks in St Lucia, was Antigua, a 200 mile overnight run and we arrived on the very last day before they too closed their boarders.

Our initial thought was to make the 400 mile run directly to the USVI but reports revealed that hundreds of cruisers had already descended on the islands and that restrictions on additional arrivals were feared.   We had been hearing about cruisers that headed to countries only to find that they were turned away upon arrival leaving them with few options but to look elsewhere.

After weeks locked down and forced to stay aboard Pandora in Antigua, we headed 200 miles to the USVI where we took a mooring in St John. There we again waited several weeks before heading for Florida, a route of 1,000 miles that would take us south of the Bahamas, north of Cuba and to Florida.  We opted to take this route because we expected this to be an easier downwind sail verses the direct run north to New England and home.

As a member of the board of the Salty Dawg Sailing Association, I thought it best to take advantage of the near 20 shoreside coordinators helping with what was to be known as the “Salty Dawg Homeward Bound Flotilla” to smooth our return to the US in addition to the near 200 other boats that participated.

In particular, we thought that we might need to stop in the Bahamas on our run home.  That country was completely locked down and were not allowing arrivals.   Fortunately, the support team for the Flotilla was able to negotiate an agreement with the Government of the Bahamas that would let boats in the Flotilla to anchor in Bahamas waters if needed.

As we approached Great Inagua, Bahamas, the half way point of our 1,000 mile leg, tropical storm Arthur was developing off of Mexico.  Our weather router, Chris Parker, suggested that we stop and allow the low to pass, so we decided to stop, anchor and wait for better weather.

After several uncomfortable days anchored in near constant wrap-around swells, we continued on.   We had to watch our speed, staying at about 3.5kts, as instructed by Chris so that we would not enter the Gulf Stream too soon and collide with Arthur’s prefrontal squalls.

To keep our speed down in brisk winds on a broad reach, we furled the jib, put a third reef in the tightly sheeted main and towed a sturdy bucket which finally slowed us sufficiently.

Then, as so often happens, the forecast changed, and we had to quickly speed up, passing the Cay Sal Banks on a reach in 20-25kts of wind. In Gulf Stream where we were hit by squall after squall with sustained winds in the 30s, one particularly nasty squall stayed with us for more than 8 hours.

Waves slammed again and again, against the hull, washing over the decks, terrifying Brenda, who had never experienced such conditions.  At one point overnight there was a loud crash as a wave slammed into the boat and I  went below to confirm that something hadn’t broken or caved in.   It hadn’t.  Later, again in the pitch dark, a wave slammed into us with such force, we were certain that our cockpit enclosure was ripped away as water flooded across the back of the cockpit.  Fortunately, there was little damage.  Nearby, an unlucky 40’ catamaran was pooped with waves breaking through their cabin doors and  washing into their cabin.

In spite of everything we entered the channel to Ft Lauderdale safe and sound, although in the middle of a torrential downpour making for a dicey entrance.

While Brenda will not soon forget the experience, the allure of the Caribbean remains and I am already making plans to take Pandora to Antigua next fall.

Recently, Brenda and I shared our experience in a presentation on Zoom.  Follow the link below to hear the story of our trip home, short handed,  an experience we are not anxious to repeat any time soon.

One response to “Escape from Pandemic: 1,500 miles from St Lucia to the US during the Covid-19 Pandemic”