A great time in Savannah. And, about those really high tides…

illicitly It’s Sunday afternoon, the sun is out, it’s a lovely day and we are at anchor just north of Jekyl Island GA.   You might want to ask “So, Bob, why are you anchored near a bridge in the middle of the day when y0u should be underway and heading south?”  Thanks for asking.

Carate Brianza We are anchored because we reached the bridge at high tide and with the strong NE winds over the last few days the tide is VERY, VERY HIGH.  The posted clearance at high tide is supposed to be 65’ but with the winds the board is showing only 62 ½’ of clearance.  As I require at least 64 ½’ to make it under the bridge that would suggest a bad outcome if I don’t wait a bit.  Can you say “shear off the gear on the top of the mast or worse?”  High tide was supposed to be at 12:30 but by the time the current slacked, signaling that the tide had stopped rising, it was actually 1pm.   That means that I will have to wait perhaps as much as two more hours until the tide drops enough for me to make it under the bridge with good clearance.  Oh well.

The problem is that with the days so short combined with some problem spots along the way with shoaling, this will certainly slow me up for today.  Happily, we should still be able to make St Mary’s by Monday afternoon.  Well, with that extra two or three hours to sit here, perhaps it’s time for a post.

Georgia is the part of the ICW that we had planned to skip because of the wind-y course that the waterway takes combined with shoaling issues that limit the times of the tide when a boat with Pandora’s draft can make it though.  However, with the nasty NE gale force winds offshore we decided to make the run inside, slow or not.  I have to say, circuitous route and all, it’s been a very pretty run.   The route as the crow flies Georgia is about 100 miles but the ICW route is close to 140 miles.  That’s a lot of to-ing and fro-ing to get from here to there.

Well, enough of why we are anchored instead of going south.  So, how was Savannah?

We had a lovely visit to Savannah for a few days and enjoyed the city.  We tied up at the city docks which are located right adjacent to the historic district.   As is the case with so many things nautical, there was ample opinion as to the best way to visit this particular city by boat.  Most say that going to the nearby town Thunderbolt, and taking a bus into the city was the better way. That way you can avoid the 8 mile run up and back down the river to rejoin the ICW.  Others said that the best way to visit is to be right in the thick of things and use the city marina.

It’s hard to say which is better but I do have to say that the amount of debris in the water including the tarp that I snagged on my prop does give one pause for thought about visiting by water.  Having said that, it was very pretty, nautical trash aside.

This shot of Pandora is particularly interesting for us as the hotel in the background is where Brenda and I stayed a few years ago when we visited the city for business.  Me, I like visiting aboard Pandora, minus the “business” thing. 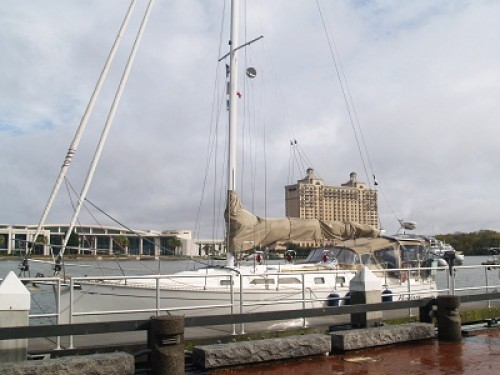 If one shot of Pandora at the dock is good, two is even better. 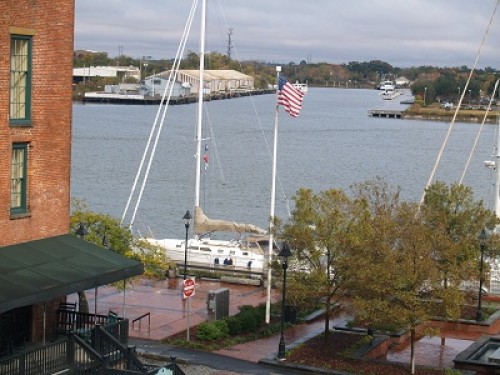 The area down near the water is very scenic.   Speaking about high tides, the water came within 6” of flooding this brick walk area at high tide both days that we were there. 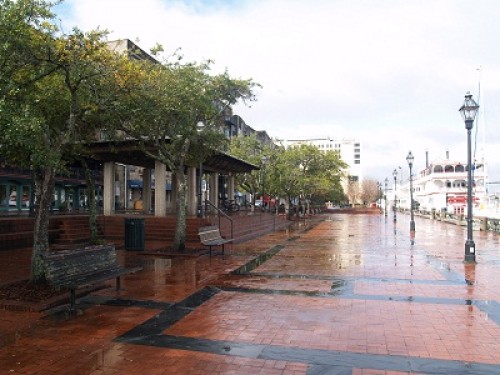 Just adjacent to this is a row of old buildings that were once business that catered to the ships coming to the city.   Now, it’s candy shops and tee shirts.   Still pretty. 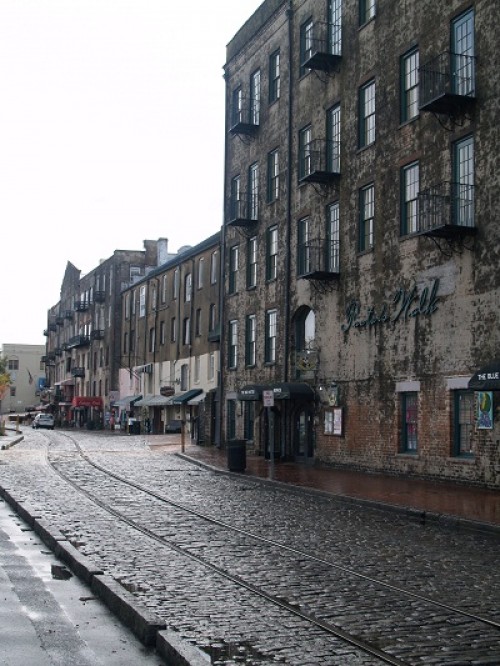 Just above the waterfront is where the city is.  These buildings are the back side of the ones in the picture above.  Not likely to get flooded there.  This is a very nice wrought iron bridge.   Below is the river. 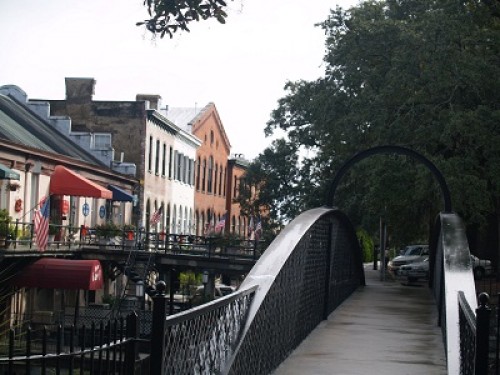 The local architecture is really great and perhaps one of the most famous is the house where the murder as chronicled in the book Midnight in the Garden of Good and Evil.   Nice place.  Me.  Not sure I would be willing to kill to live there though. 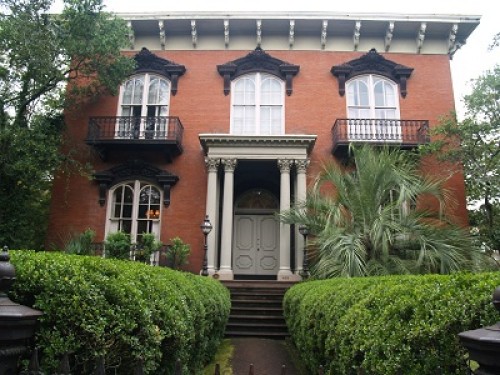 There is a big park in the city and this fountain is particularly nice. 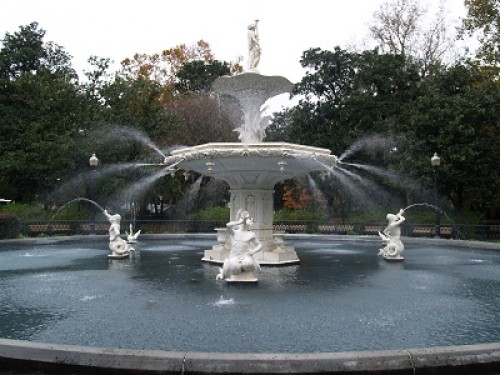 I just love the amount of greenery everywhere.  Very lush.  However, I expect that plenty of gardeners are needed to keep up with even the ivy that is all over the buildings. 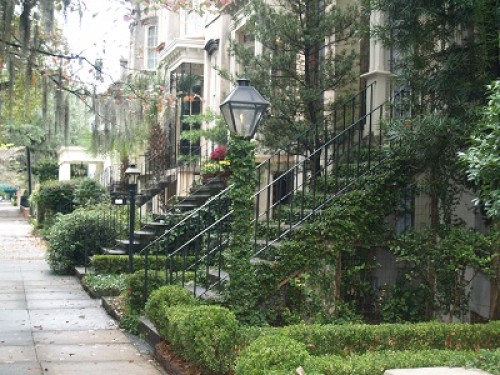 No, not exactly one-of-a-kind but what a nice run of porches and rails. 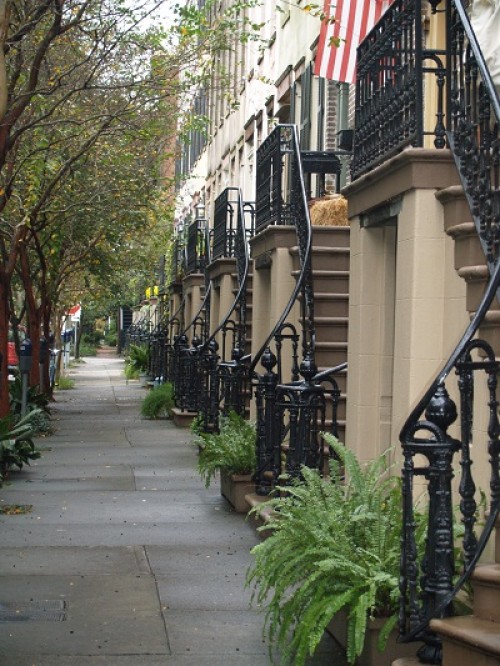 This garden was hidden, sort of, behind a gate.  Glad that there was a slot to peek through to get this photo.  Imagine what sorts of gardens we must have missed. 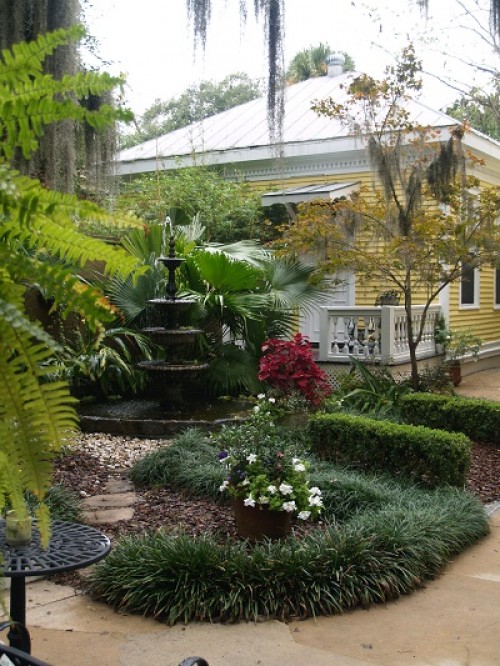 The visit was really nice but it’s good to be on our way again.  Well, sort of on our way given the bridge thing.   The marshes that we are traveling through seem to go on for ever.   The last few days have been cold and grey but today, sunny!  It’s amazing how different things, and life in general, look in the sunshine.   While most of the land, if you can call it that, is covered by marsh, there is the occasional hump with a few trees.  It’s really very pretty. 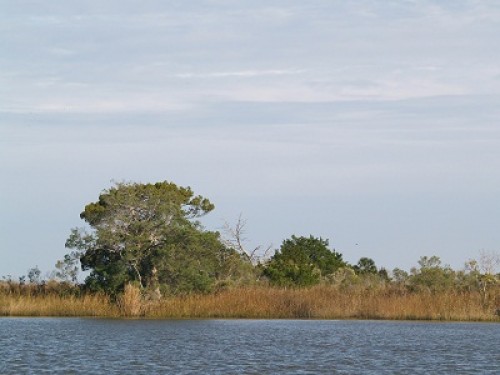 Well, it’s nearly 2:30 and I do so hope that my next post won’t be about shearing the gear off of the top of my mast.  Fingers crossed.

One response to “A great time in Savannah. And, about those really high tides…”