Solo to Antigua in 7 days.

This year’s Salty Dawg Rally, with more than 50 boats participating, departed from various points on the East Coast in early November with the bulk of the fleet heading to Antigua, 1,500 miles to the south.

As part of the “shoreside team” for the rally this fall, I had heard that someone was doing the rally solo.   At the same time, I had seen a boat Fatjax, pull way out in front of the fleet 0n the tracker, wondering, what sort of a boat is that?

Most boats had multiple crew aboard but Iain, on Fatjax, made the run solo.  Rally management doesn’t necessarily recommend doing the run alone but with a properly outfitted boat and an experienced skipper, solo sailing can be a rewarding experience.

After Fatjax arrived in Antigua I was able to speak with Iain about his remarkable run.

Here’s Fatjax at anchor in Antigua. 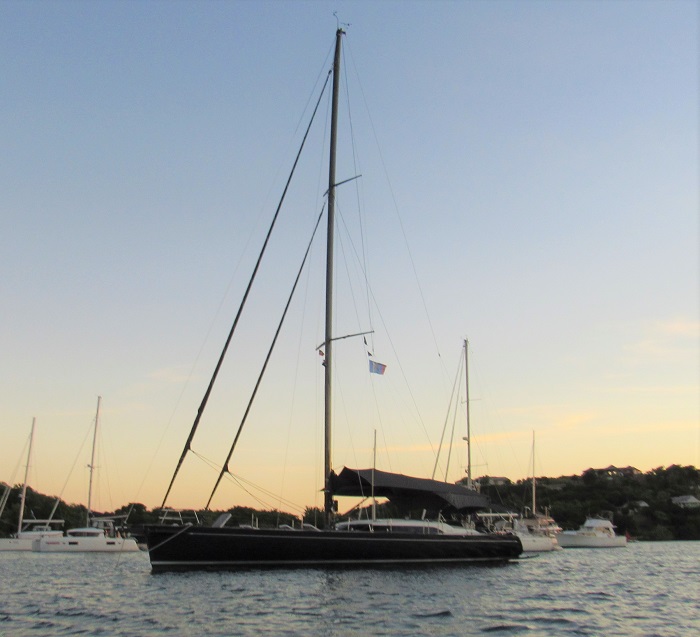 Maintaining a near double digit average speeds over the nearly 1,500 miles to Antigua was impressive, especially given that for most of the trip this year, boats had the wind forward of the beam.   By the time that Iain arrived in Antigua he was hundreds of miles in front of any other boat in the rally.

Yes, Fatjax is fast but it is important to note that the Salty Dawg Rally is not a race and every skipper is encouraged to make their own decisions on when it’s time to depart and what course to take.  However, race or not, everyone who has been on a sailboat knows that when push comes to shove, they want to go as fast as possible and get there first.   “Welcome guys.  Have a fun run today?  It was nice to watch you come into the harbor.  I am about to have a second rum punch.  Want to join me?”

Iain told me that Fatjax sails close to the wind most of the time as the faster you go, the apparent wind is brought forward, something that happens on really fast boats but not so often on mere mortal cruising boats.

So, after 7 days at sea, pounding into the waves he pulled into English Harbor, eager to dry off and get some rest.

Here’s Iain on the dock in English Harbor, the first boat from the rally to arrive in Antigua. 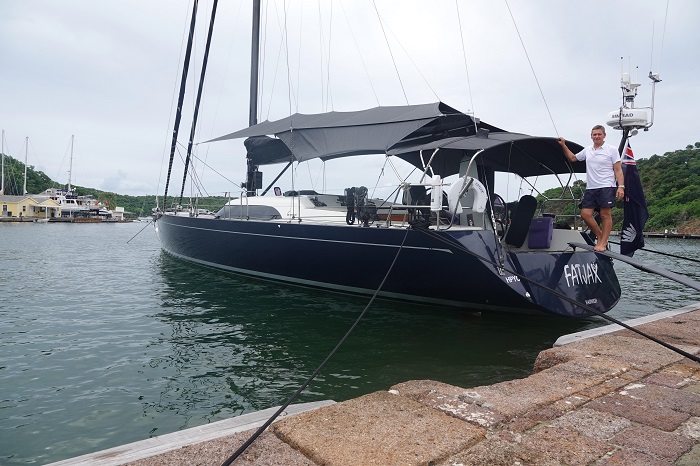 Last fall, Iain and his wife Jacqueline, both from the UK, sailed Fatjax to the Caribbean from the Canaries, landing in St Lucia.  Like so many cruisers, me and Brenda included, they suddenly found themselves locked down due to the virus a few months later.

When the pandemic struck they had only made their way north as far as Guadaloupe.  With island after island closing it’s borders, they planned to head to the BVI, which seemed like a good idea as they are both British citizens  Unfortunately, the BVI closed their boarders leaving only the USVI as an option.

With no other options and like so many other stranded cruisers, they headed to the USVI as their final stop before continuing north to the US as part of the Salty Dawg “Homeward Bound Flotilla”.

This photo of Iain and Jacqueline suggests that their run north took them through NYC.  Welcome to America! 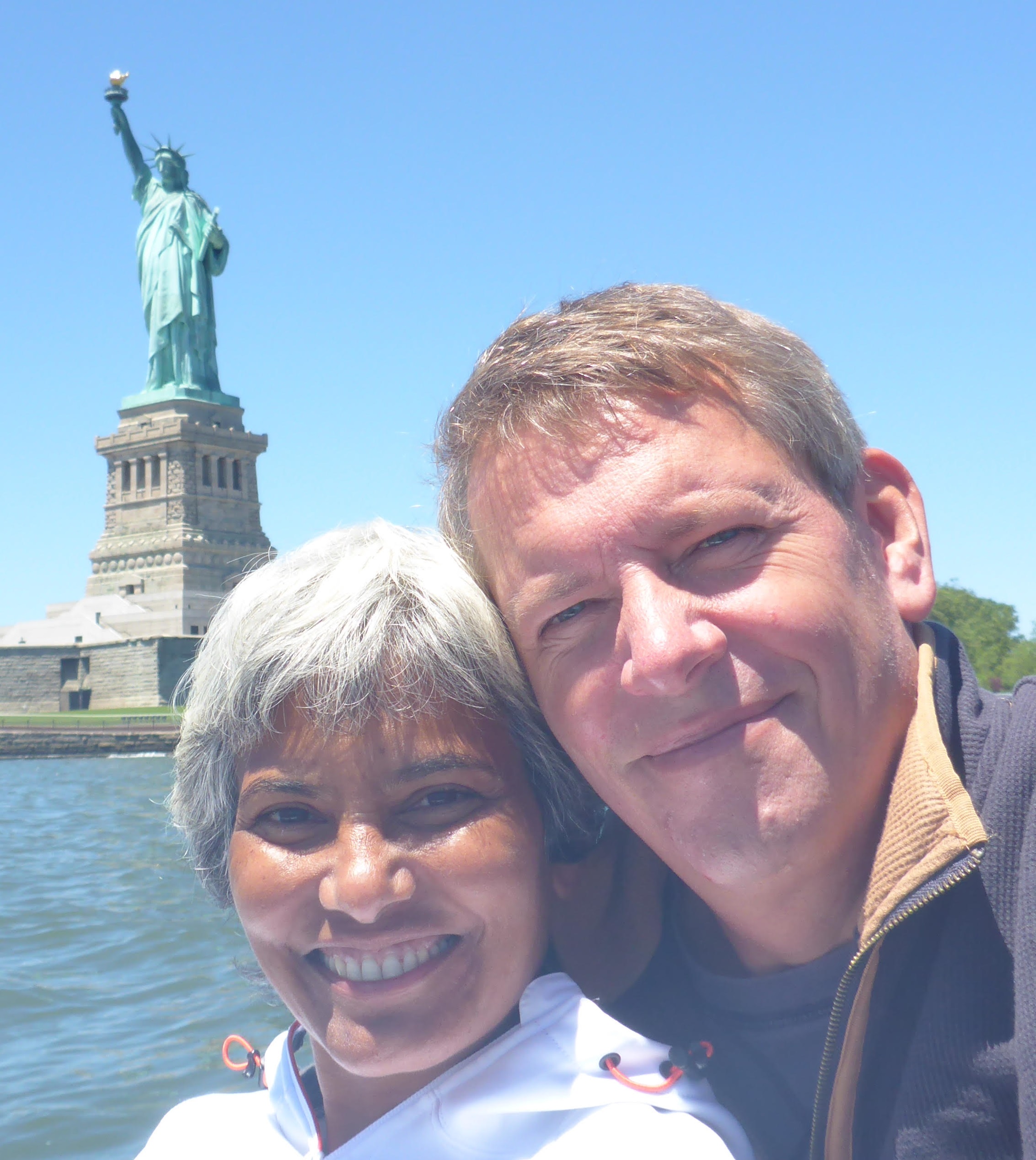 They cruised the US east coast and made their way to Newport where Iain spent much of the summer alone after Jacqueline flew home to the UK only to learn that she was unable to return due to pandemic travel restrictions.

Fast forward to October and Jacqueline was still unable to return to the US so Iain had to decide what he was going to do about crew for his run to Antigua.

After considering his options and spending much of the summer alone aboard Fatjax,  Iain decided that he would join the Salty Dawg Rally and make the run from Hampton to Antigua solo.

Iain is no novice at ocean sailing as he has sailed nearly full time for the last 20 years, participating in many ocean races, including the Fastnet race.   As an accomplished racer he readily admits that the cruising lifestyle is new to him and to Jacqueline, who herself is fairly new to sailing.

Fatjax is a Shipman 63’ carbon, fast cruiser launched in 2007.  She has a lifting keel that draws 11 1/2 ’ keel down, and 7 ½” when retracted.   Iain purchased Fatjax in the Mediterranean from some neglectful Russian owners.  According to Iain “she was quite a wreck,” and he spent the next two years refitting her, mostly by himself.   Seeing her today shows that he did quite a job putting her right.  She is a remarkable boat.

Sailing solo is challenging, especially in a boat that cruises at double digit speeds.  As you would imagine, at those speeds, the motion is jarring and the noise deafening, especially on a close reach.  Fatjax is so fast, moving to weather at close to 10kts, the apparent wind is just about always far forward of the beam, with spray and water flying everywhere.

Unlike most cruising boats, Fatjax’s flush deck design and open cockpit does not offer much protection from the weather, and when on passage Iain keeps both the dodger and bimini out of the way.   After so many years as a racer, he values a clear view of the sails and surrounding conditions.  He realizes that when traveling at double digit speeds, things can head south quickly.

Yes, Iain is pretty tough but admits that on this trip, close reaching much of the time, he was below 90% of the time.  In order to keep watch,  he set an alarm to scan the horizon and check on the boat every 20 minutes.  In lower traffic areas, he sometimes pushed his “cat naps” to 40 minutes.

And Fatjax is fast.  She made the entire run in only seven days and four hours, anchorage to anchorage, at an average speed of 8.9kts.  Iain told me that the run would have been under 7 days except for light winds during the last 36 hours.  7 days plus, 7 days minus… that’s fast.

Solo sailing isn’t for everyone, but for this trip it was something that Iain felt that he had to do.  He plans to fly to the UK in December to rejoin Jacqueline, and together they will return to Fatjax to continue their journey.

Their exact plans are still a up in the air but one thing is for sure: wherever they go, they will get there faster than the rest of us.

As they become accustomed to the cruising lifestyle, it will be interesting to see if Iain and Jacqueline continue to keep their dodger and bimini secured on passage.  Jacqueline may have something to say about that.

And speaking of the cruising lifestyle, Iain hosted sundowners aboard Fatjax for some of our cruising friends from Roxy, Kalunamoo and Skylark.   Bill sent me these terrific photos.  Thanks Bill. 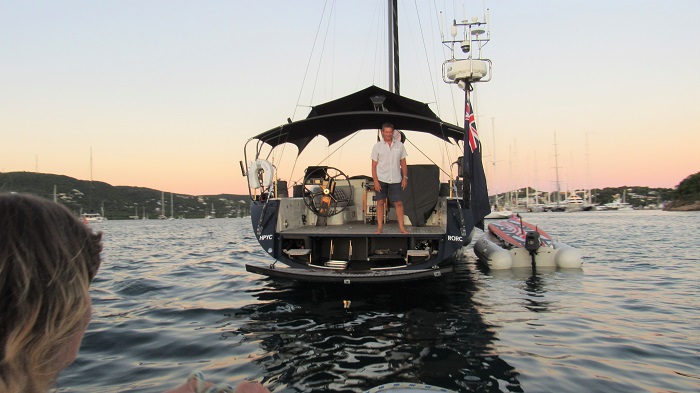 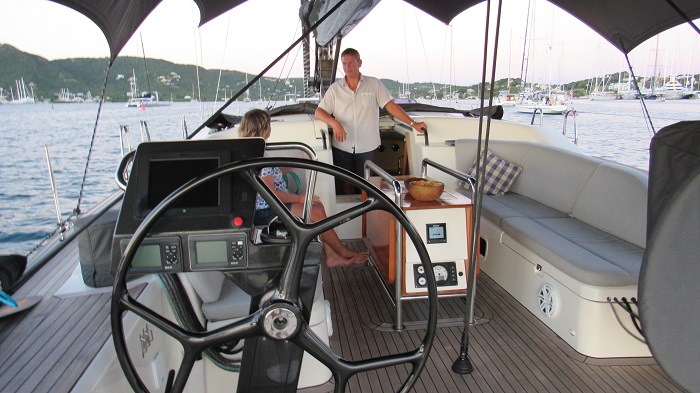 Maureen, AKA: Vana White of Kalunamoo, taking a tour below. 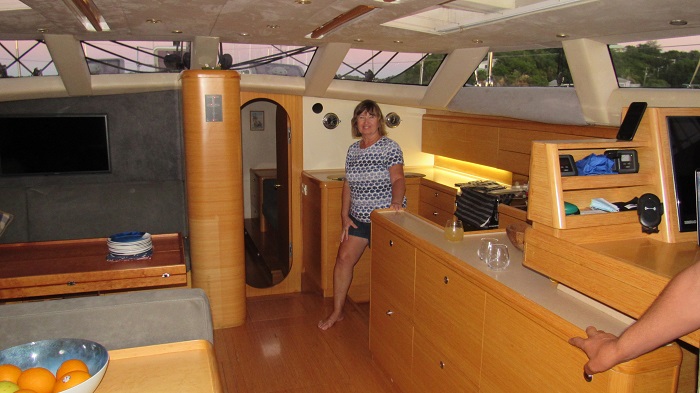 Nice spot to take a nap. 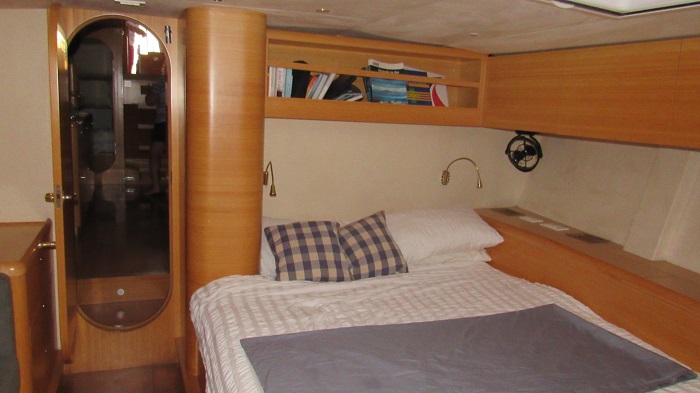 Yum…  So wish Brenda and I were there…  In case you are wondering about social distancing.  Remember, Fatjax is open to the air, alfresco as it were…   Just wait till the Christmas winds kick in in a few weeks. 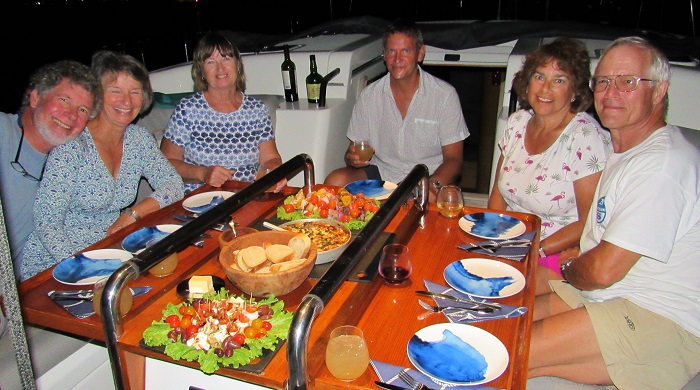 I still wonder if Iain will still keep his dodger down all the time once he spends more time with us old cruising types.  It’s all about comfort, isn’t it?

And, of course, going fast!