You can find all sorts of fun stuff in the Savannah River. Trust me on that.

mourningly We are tied up to the municipal pier here in historic downtown Savannah for a few days to enjoy the sights.   The weather has turned cold with a periods of rain and the sky is the color of slate.  Having said that, it’s not as cold as Essex back home where I am told that it dipped into sub freezing temperatures overnight.

Kupjansk Because of the strong north/east wind blowing offshore the tide was particularly high yesterday, perhaps 3-4′ higher than usual.  As a result, an amazing amount of trash washed into the river.  As we were heading up the river on Wednesday morning we passed plastic bottles, branches and all sorts of stuff floating along.   Brenda was at the wheel as we came to within the last mile of the dock, dodging debris as she headed up.  All of sudden the engine RPM dropped to almost nothing and the engine nearly stalled with tons of thick black smoke billowing from the exhaust.  We were dead in the water.  I couldn’t imagine what we had tangled with.  As the engine had quit so suddenly but there wasn’t a “clunk”, my first thought that it was some sort of fabric or plastic that had wrapped itself around the prop.   However, I did imagine that it might be something much , much worse.

Oh, and did I say that there was a 900′ car carrier bearing down on us along with two 90′ tugs?  Oh yes, it was not a good situation at all.  Besides, the river is so narrow, you can’t believe it.   Given the amount of traffic that comes up the river you’d expect that it would be much wider than the 650′ that it is where we were drifting.    So…no engine.  drifting in the middle of a busy shipping channel.  Over 1000′ of steel bearing down on us.  So, what to do?  Hmm…

Well, I did what anyone in my predicament would do.  I CALLED FOR HELP!  As luck would have it, Brenda and I have been traveling with another boat, Brilliant, for the last few days.  Traveling with a “buddy boat” is something that we almost never do but we were yesterday.  So, I called our new best friends on Brilliant and asked for a tow.

Brilliant’s crew are Pete and Stephanie who have been living aboard for about ten years and brought their boat across from the Med about 5 years ago and have been doing the snowbird thing here in the US since then.    Boy, was I glad to have them near by.

So, Pete and Stephanie sprang into action mode putting out lines and fenders so that they could come up along side of Pandora, raft with us and take us in tow to the dock.

At the same time Pete was on the radio talking to the tugs and ship about our situation and plan so that they would know that we weren’t just idiots waiting to be crushed by them.  When I tell you that the ship was close… Trust me, it was very close, and getting closer by the minute.

This isn’t the actual ship as I was too busy to get out the camera.   However, it was one more in a constant stream of massive ships that are coming by us as we sit on the dock.  This one was passing a lovely schooner that gives day trips on the river.  Trust me on this.  These ships are very LARGE!!! 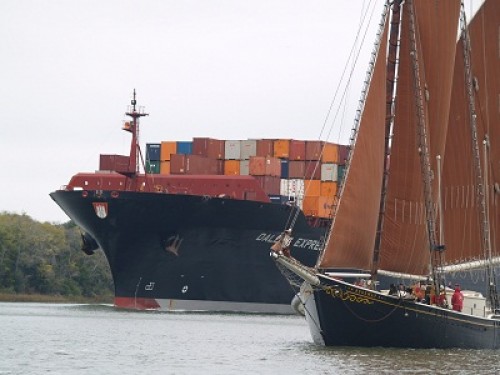 As I was on the deck getting fenders and lines ready for the tow, I couldn’t hear the conversation going on about Pandora.   It seems that the plan, if Pandora couldn’t get out of the way in time, was for the tug to hit me with his prop wash and push me to the side of the channel.  Remember how narrow it is?  I shudder to think what that prop wash would have done to Pandora as she was blown to shore by the tug.  However, I expect that it would have been a lot less traumatic than being crushed by a 900′ ship.

So, how did it go you ask?  Swimmingly.  We were able to drift with the wind and current to the side of the channel.  Get out of the way of the ships and tie to Brilliant who deposited us on the dock like a pro.

People often ask me how big Pandora is when they hear that I have a sailboat.  I say that she feels really little the further we are from land and really big when she is near something hard like a dock.  I think that I will add to that one more description now.  Pandora feels like a fly spec, about to be squashed, when she is in the path of a 900′ ship.

Once all the fun was over and Pandora was safely at the dock I couldn’t help but be curious about what had tangled in our prop.   So, how about a swim in the Savannah river?   I have to tell you that it’s not that much fun.  The current is immense  the water about the color of coffee with milk.  That would be strong coffee with milk and what I estimated to be about 6″ visibility.  And, the temperature?  A lovely 63 degrees.

I waited several hours until the tide was slack, suited up in my full wet-suit, boots and hood.  Fired up the compressor and went for a swim.

So, I went for swim to see what I had “bought” from lovely Savannah.   I ducked in and under the boat and immediately realized that I had misjudged the visibility in the water.  No, it wasn’t 6″, it was ZERO.  Even with the front of my mask touching the blades of my prop, I COULDN’T SEE A THING!!!  Well, it wasn’t hard to “see” what had caused the problem.  I could easily feel that it was a large piece of polypropylene cloth and I unwrapped it in less than a minute.

This is what was what we had picked up.  I am so glad that we had someone standing by to help. I must have someone watching over me, my own personal guardian angel along with Brilliant. 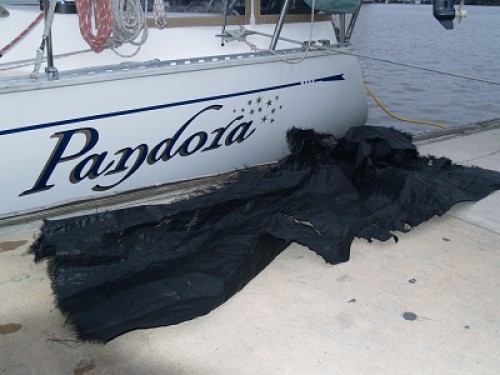 While I was waiting for the current to slacken at low tide, I decided to drop by and visit another boat on the dock.  This survey boat was waiting for a job up river and the owner/captain was only too happy to answer some questions.    Fred’s boat is a technological wonder and he was happy to share information about it with me.

His business Bottom Line Echo Company which maps or surveys waterways for folks who have “lost” stuff.  Along with finding sunken planes and boats, he has found plenty of great things for insurers and owners over the years.  He told me that his equipment is so precise that he can find a handgun in the bottom of a muddy river.  Note to self, as you are running from the cops after robbing that liquor store, don’t throw that illegal handgun off of the pier if Fred is working in the area.

Fred’s boat certainly looks like a good example of “form follows function”.   Pretty slick.   That pole on the port bow with the two black disks is a fancy depth sounder.    His site says that it’s a KNUDSEN 320mm depth recorder with dual 28 and 200 KH depth transducers.  OK, yeah, got it.  I guess that means he can tell how deep it is. 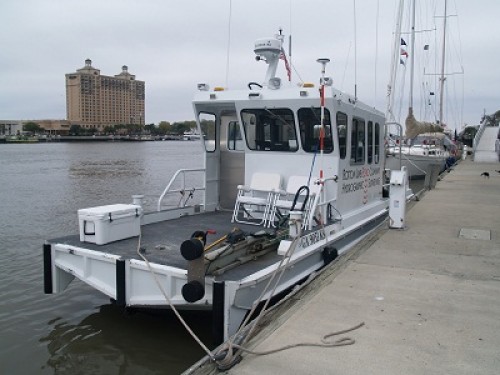 If that’s not cool enough for you, how about the side scan sonar that he can tow behind his boat.  Very high tech.  This isn’t the actual one.  His is a lovely green. 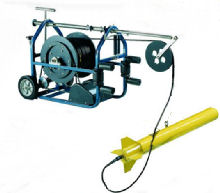 The cabin is pretty tricked out. 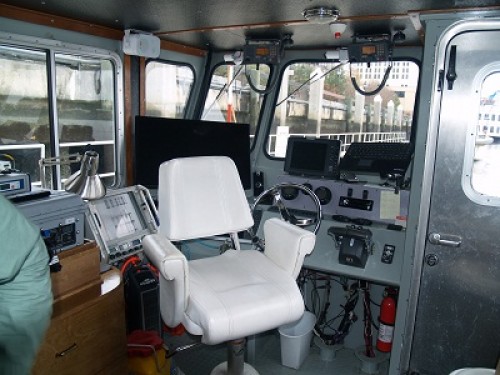 Here’s Fred slaving away at his PC.  Or should I say “at one of his PCs”. 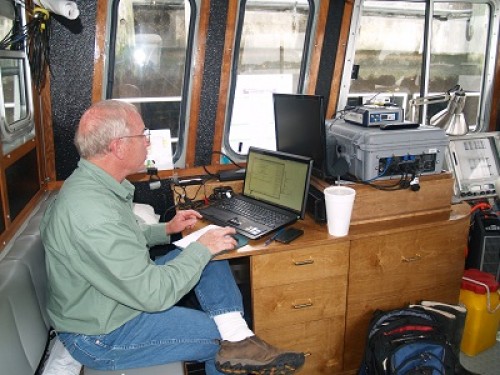 This is his nifty towed sonar.   It looks expensive and Fred said that it is.   I asked him what was the most interesting thing that he had found.  After thinking for a moment he described finding a whole collection of heavy equipment, that’s bulldozers and dump trucks heavy equipment, that he located for an insurance company.  It turns out that someone had stolen the stuff, taken out the engines and had pushed the “remains” off of a barge.  They assumed that they would never be found however I guess that they had not met Fred.  Oops!! 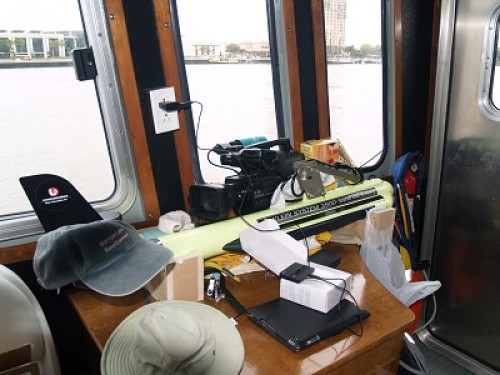 The boat is small enough to tow behind a truck so he can move from place to place easily to take on jobs.  After he is finished in Savannah he was headed up to New Jersey to survey a harbor near an oil refinery that had been badly damaged by Sandy.  It seems that some equipment had washed into a harbor there and he needed to map it so that the stuff could be pulled out by a salvage company.

Unfortunate for us, Fred had not yet found that great poly tarp that we tangled with.  However, it just proves once again how much fun cruising can be and validates that boating is “hours of boredom punctuated with moments of sheer terror”.   Or, put another way, “cruising is boat repair in exotic places”.

Me, it adds spice but Brenda may have another view on that.   Besides, on occasion we do find interesting stuff when we are on the water.  Sometimes, a bit too interesting.

One response to “You can find all sorts of fun stuff in the Savannah River. Trust me on that.”