It’s only been a week since I was last in Block Island when I was here with my friend Craig.  Yesterday, after waiting a few days in Wickford for the strong north winds to settle, Brenda and I made a run here, our second stop on the “twilight cruise”, our last for this season.  Sure, we may still make a short evening run or two on the CT River, perhaps to see the swallows gathering before their run south, but it won’t be long until Pandora is out and on the hard for the winter.

Yesterday I hosted a Zoom meeting as part of the Salty Dawg Webinar series, with the Director of National Parks in Antigua, Ann-Marie Martin.  She was joined by Paul Deeth, owner of the Admiral’s Inn, also in the Dockyard.

They spoke to captains making the trip there this fall as well as others considering Antigua as a destination in the future.  There were questions about how the island is handling the virus and what cruisers could expect as the season unfolds.

While there is much uncertainty, one thing for sure is that being in Antigua, with the warm weather and the opportunity to continue to live life outdoors, will be a lot safer than life here in the Northeast US where everyone is bracing for a resurgence of the virus.  To that point, we are expecting that a record number of boats in the rally will head to Antigua.  I find that very rewarding given all the work that goes into preparing for the fleet’s arrival.   This will be the first year that I won’t be there to welcome them.  Next year…

Here in the US, as winter approaches, experts are reminding us that what is coming won’t be a “second wave” as there was never a reduction, with infections near an all time high so we are still in the clutches of the first wave.   Scary stuff.

Brenda read this morning that doctors are seeing many more patients than normal complaining of hair loss and their best explanation is stress, perhaps associated with the pandemic.   I’ve often heard dog owners speak of their stressed dog as “blowing a coat” to explain why their upset dog was loosing much more hair than usual.

Perfect.  One more thing to worry about, as if having a president who is suggesting he won’t leave the Whitehouse, even if he looses the election, isn’t enough.  Now we can look forward to being part of a nation of “coat blowers”,  going bald on top of everything else.

So, here we are, me and Brenda, back in Block Island, a place we have been visiting for nearly 40 years.  Much has changed since our first visit, so long ago, in our very first boat, a 20′ Cape Cod catboat, Tao.

We were reminded of those times yesterday when this little Marshall catboat, 18′, arrived and pick up a mooring nearby.  I could not resist the temptation to stop and say Hi.  Brenda could not resist taking a picture. 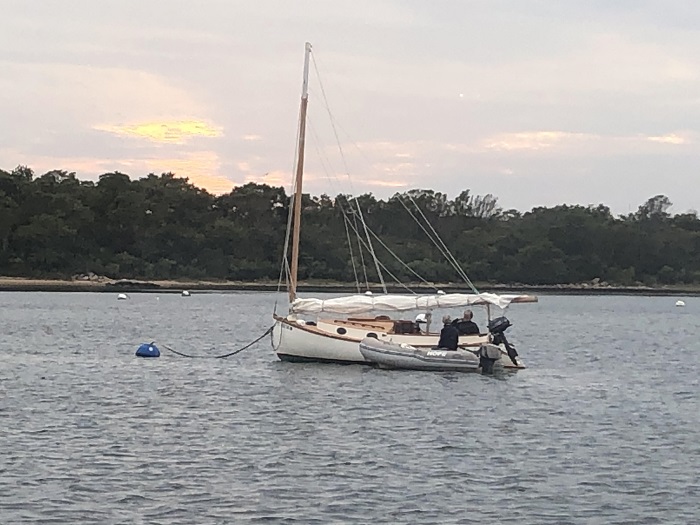 Hard to believe that Pandora’s dink is half the length of our first boat.

Also near by, a lovely yawl, I think an Invicta, sister ship to our own Artemis, one of 11 built in the 60s.   Her lines are beautiful.  Alas, not such a fast boat. 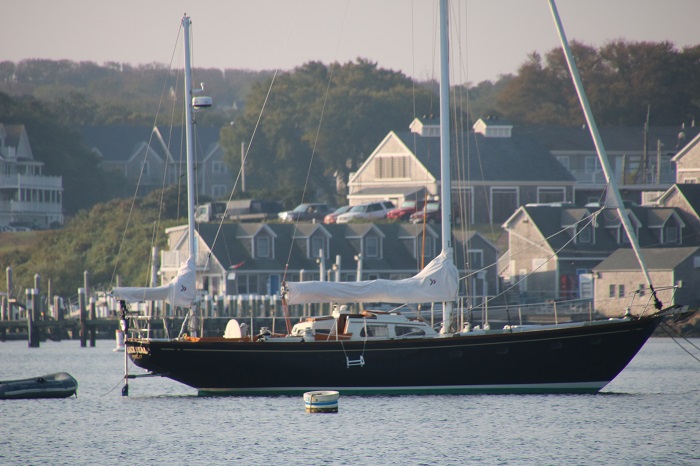 When Craig and I sailed from Block Island to Newport last week, we had a wonderful downwind sail and after days of strong north winds in Wickford, wouldn’t you know that Brenda and I had to motor directly into a south wind?  Such is life.

Brenda and I arrived in Wickford, where I had left Pandora for a few days, to head home to visit.   You know, the lawn does need to be cut.  When we returned to Pandora it was really chilly for the first few days and very windy.  Good thing our diesel heater was working as it kept the outside low 40s temperatures at a bay.  Down below we were warm and comfortable.

Wickford is a place we have enjoyed visiting for as many years as we have been boating although I don’t think we took Tao there.  I do recall at least one departure from Newport aboard Tao that, like yesterday, had us motoring directly into the wind, trying to get out of Narraganset Bay and around Point Judith on our way home from a vacation.  For sure, yesterday’s trip was a lot more pleasant.  Brenda still remembers that trip, and not in a good way.  She does have a very long memory.

Back in those days, when the weather cooled in the Fall, our only solution to stay warm was to invert a clay flowerpot over our tiny kerosene burner.   These days time aboard, complete with central heating, is a bit more civilized.

One thing that has changed a lot over the years is the size of the yachts in Newport.  They are huge.   How about this monster speedster? 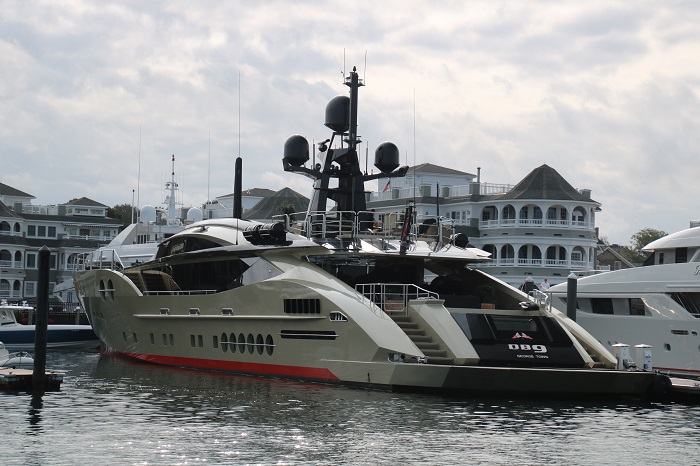 I expect that he burns more fuel in an hour than we burn in a whole year.  And I mean more even if you combine all that we use in our cars, boat and at home.  With a burn rate, of as much as 1,000 gallons per hour when she’s speeding along at 30+ kts, a lot more.  Talk about a carbon footprint.

A powerboat owner once quipped to me, in response to a question by me about how much fuel he burned in an hour,  “8 gallons an hour but I can afford it”.  Ok, but some might suggest that isn’t really the point.

Some might suggest that burning that amount of fuel is wasteful.  However, if I could afford it, I’d probably find a way to rationalize it and have a big beautiful yacht myself.  Perhaps something like this. 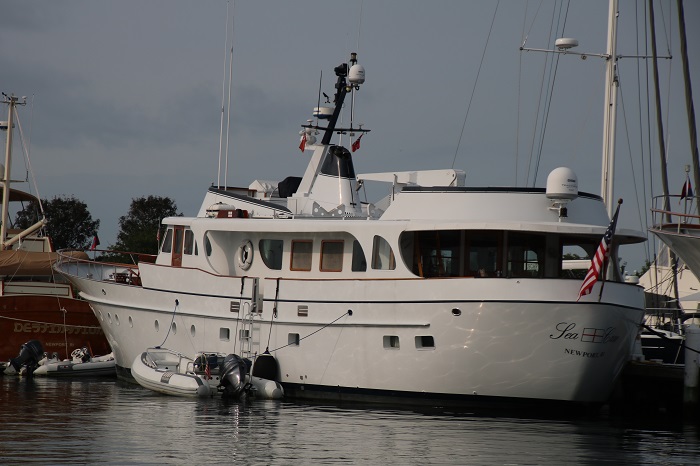 Or, if I couldn’t stand the idea of a power boat, something like this beauty. 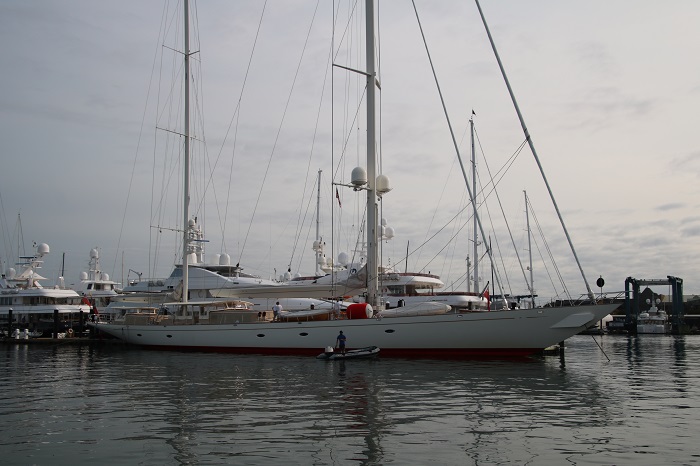 It’s always interesting to see some of the same yachts, year after year.  This is Spartan, the last remaining of the NY 50s class, built in Bristol RI by the famous builder Herreshoff, one of several built for members of the NY Yacht Club, launched in the spring of 1913.  Her current owner spent millions having her restored during a project that began in 1981 and took 8 years.  It appears that she is, once again, having major work done. 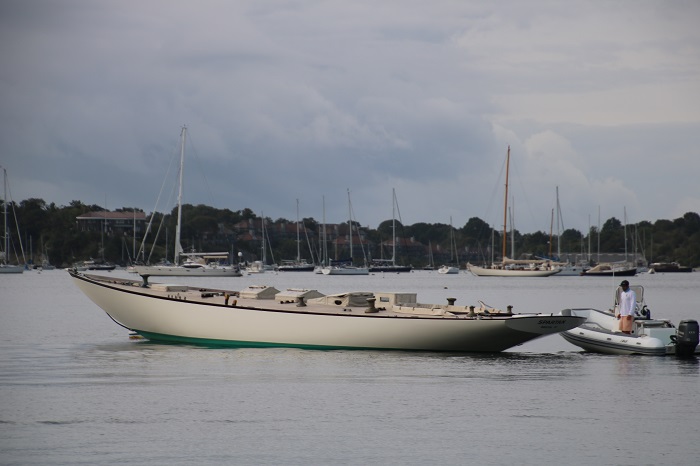 Here’s Spartan under sail.  I first saw her when she was on display at the Wooden Boat Show in Mystic a number of years ago.  For some reason, I can’t find that photo? 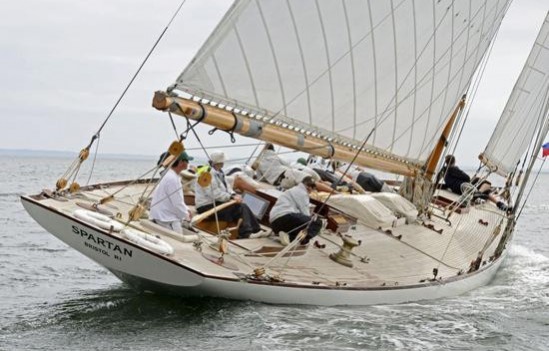 Pretty remarkable and at more than 70′ long, she is primarily a day sailor and a big one at that.  However, by today’s standards, a small yacht.

As Craig and I made our way from Newport to Wickford, we were passed by the Oliver Hazard Perry, a reproduction tall ship berthed at Fort Adams in Newport.  She was conducting man overboard drills.   When the breeze picked up and she put out all her sails, Pandora still passed her easily.  The Perry isn’t great in light air, it seems. 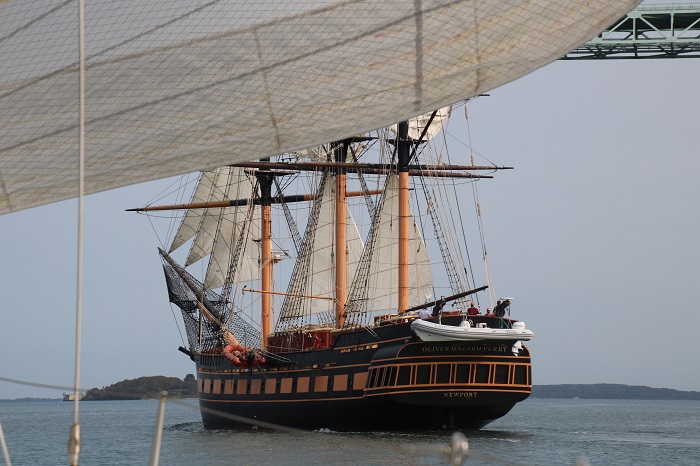 She is quite a contrast to Pandora but an even greater contrast in designs was when Enterprise, one of the 12 meter yachts built to compete for the America’s Cup.  She is still sailed out of Newport as one of a number of 12s that have been kept in sailing trim. 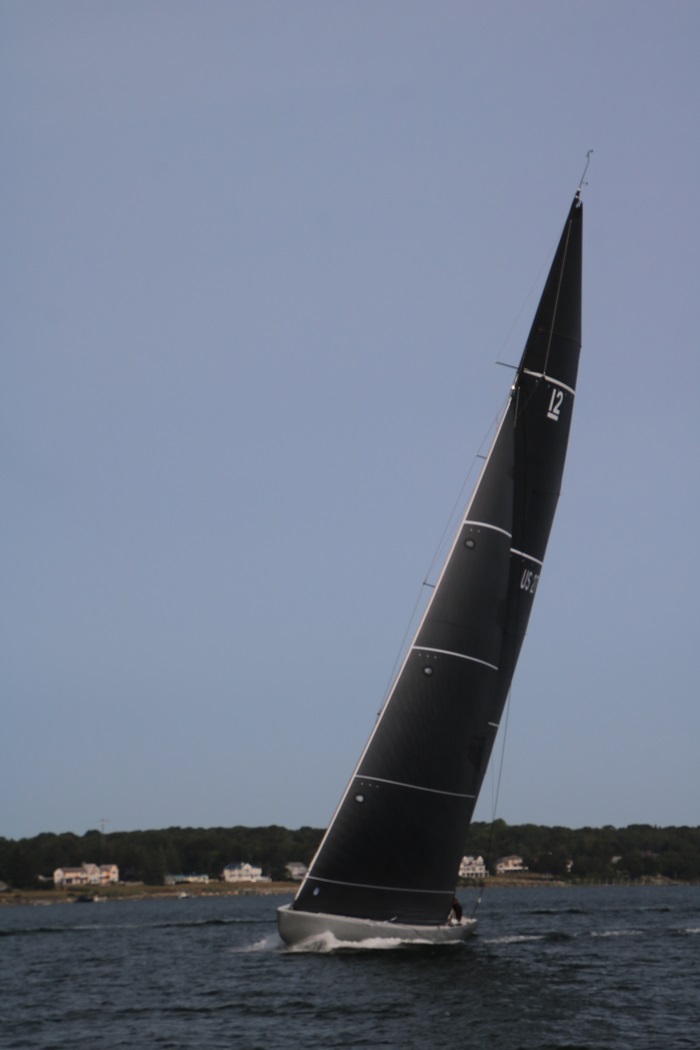 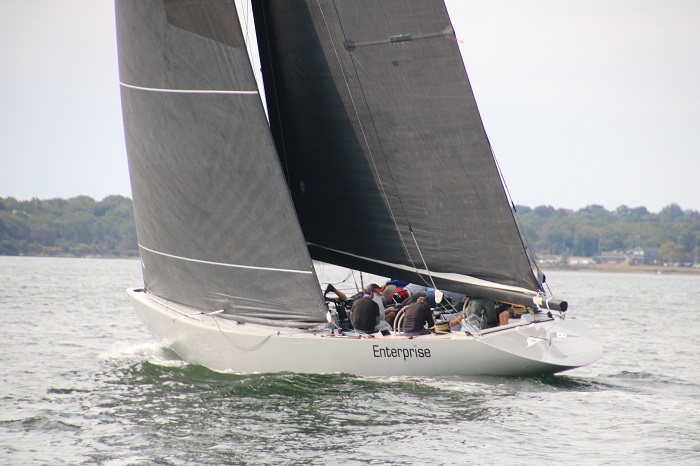 What a contrast to see her and the Perry in the same frame.  Escapees from such different times. 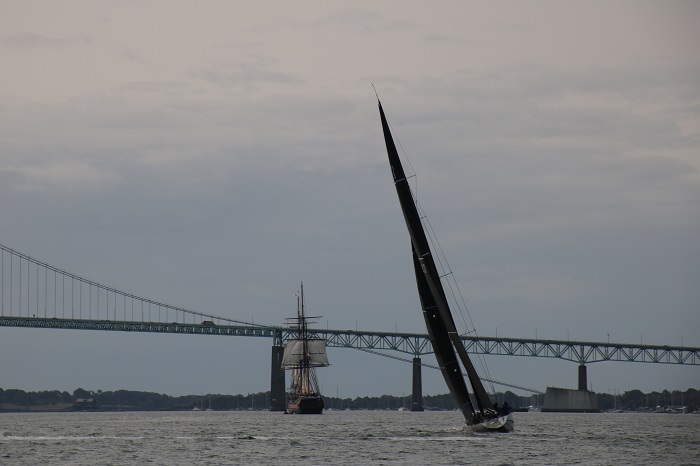 And speaking of yacht racing,  Brenda and I got a kick out of this boat load of guys heading out with their RC boats for an evening of racing.  Love the dual engine pontoon boat.  Actually, the motor on the left is on a “chase boat”, I guess to retrieve errant yachts.    They seemed to be having a very nice time, no doubt helped along with cans of beer. 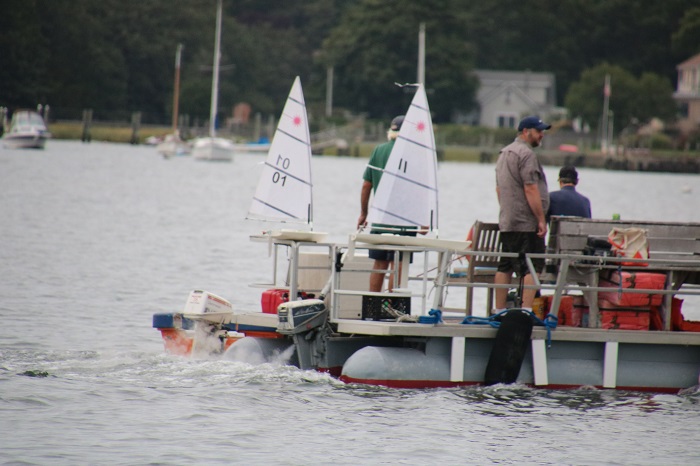 I was struck by this Buddha, guarding Wickford harbor, a sort of silent guardian of the people of Wickford.   I’ll go with that.  In these days of pandemic and the polarization of our country, we need all the help we can get. 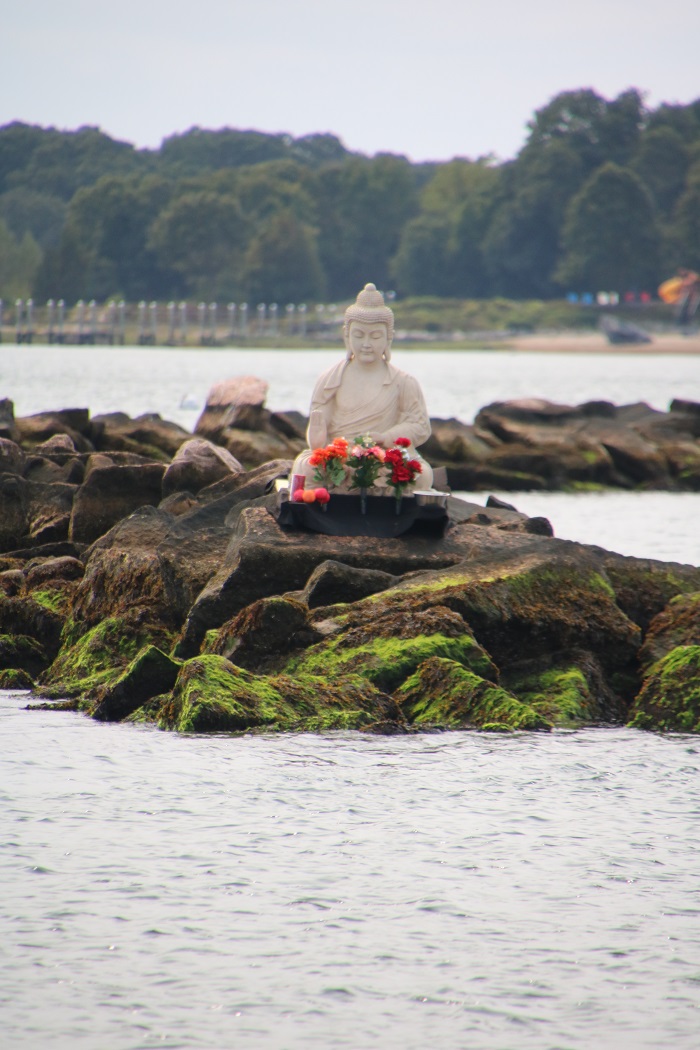 Unfortunately, during a particularly high tide, while were there, the water was right up to his chin, yet another metaphor for what many of us are feeling these days as we all work hard to keep our heads above high water.

At least we can take solace in the fact that the sun continues to rise and fall every day, always predictable.    Our neighbor, the catboat, nicely framed by yet another beautiful sunset. 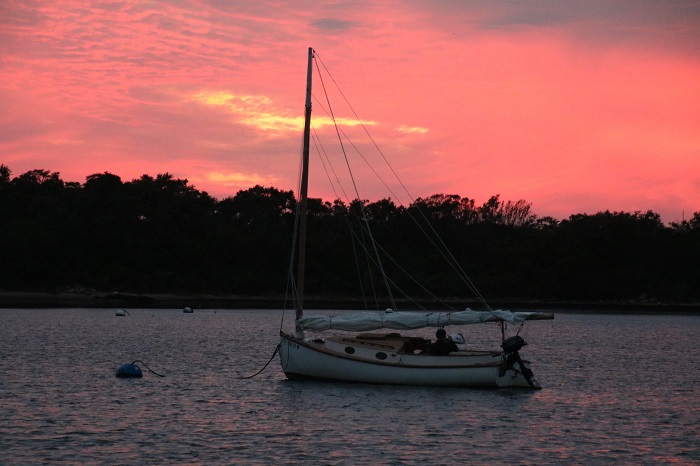 Yes, the sun will come up again but I fear that there are going to be a number of nasty gales along the way.

Batten down the hatches…