Listen carefully and you can hear the gates slam shut.

By any measure, this year’s boating season has been unique.  In a socially distant world many have turned to boating as a way to spend time with family and yet avoid infection.   Anecdotally, I have heard that boats, both new and used, have been selling like hotcakes and in spite of some pretty daunting requirements, with testing, quarantine and huge complexities for entering the islands, registrations for the Salty Dawg Rally to Antigua are running nearly the same as last year.

As I write this I am aboard Pandora in Block Island, cruising with my friend Craig for a week.    This is the first time I have been here so late in the season and it’s pretty clear that the season is over.   There are dozens, perhaps hundreds of open moorings.  We used an Essex Yacht Club mooring, free for our use. 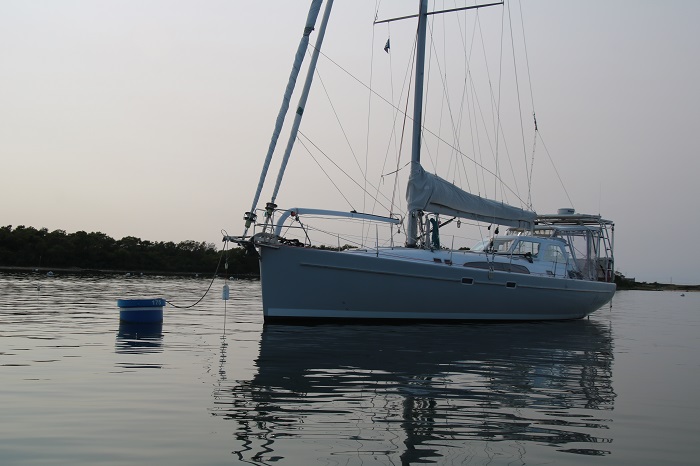 It’s not uncommon, during the high season, for every mooring to be occupied.  Not so now. 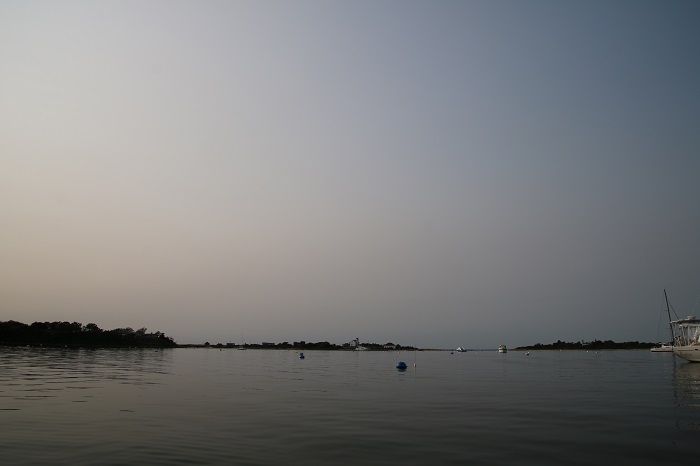 Champlins Marina, a very popular spot had only a single boat.   I am told that if you want a spot on the dock during their busy time you have to book and pay by March.  Even with a reservation, you had better be prepared to raft up with other boats on the dock. 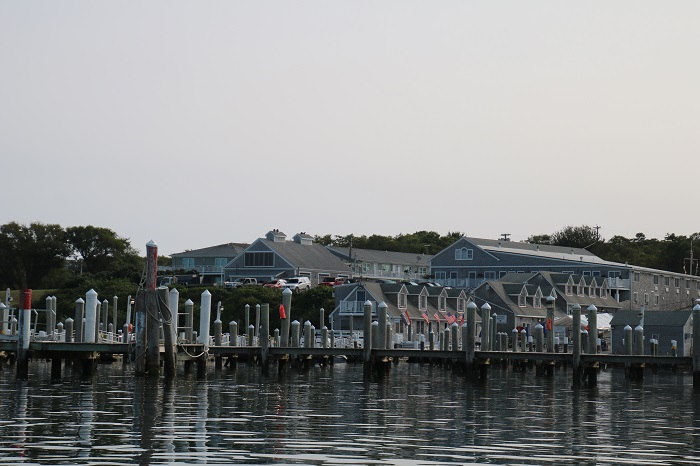 At another marina, nearly all of the floating docks were already out of the water, and it’s only one week past Labor Day. 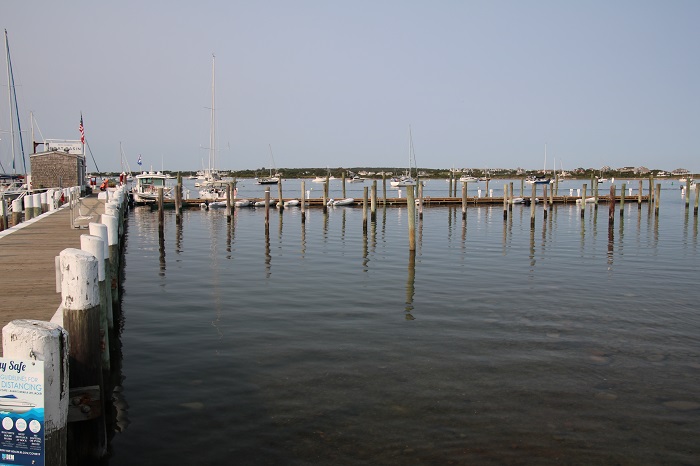 Craig and I sat out on a patio on the dock overlooking a sparsely occupied marina.  I was impressed with all of the safety precautions in place.  At the Oar, a popular spot, we had to sign our names and list phone numbers in the event that any infection broke out and they had to trace who’d been there.  The place was very lightly attended and tables were widely spaced in a fresh breeze.  We felt safe. 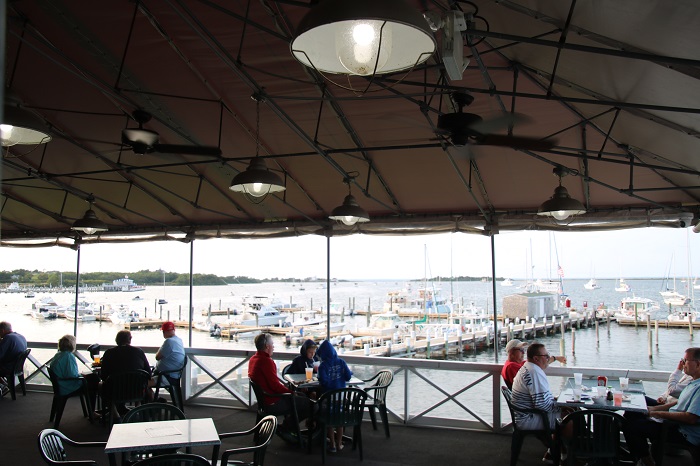 So many open moorings.  No surprise given the fact we are well into cooler weather.  These same moorings, during high season, are so scarce that anxious boaters hover nearby with a dink every morning so that they can race to claim a mooring when someone drops off. 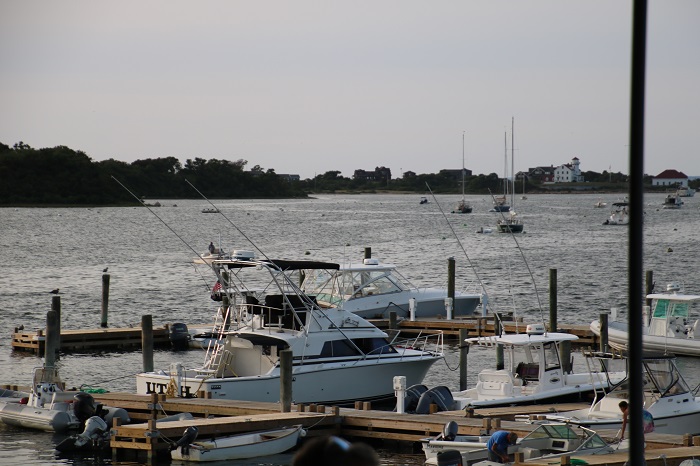 We went for a walk and while there were plenty of tourists around, it was not crowded at all and we only saw a few mopeds, the usual scourge of summer.  The constant buzzing of racing mopeds, was nowhere to be seen.

I had remembered that there was a petting zoo near Old Harbor, on the other side of the island, where most of the old hotels and shops are located.  They have quite a collection including a Yak.  I think that’s how it’s spelled.  He’s the big black guy on the right.   Quite the menagerie. 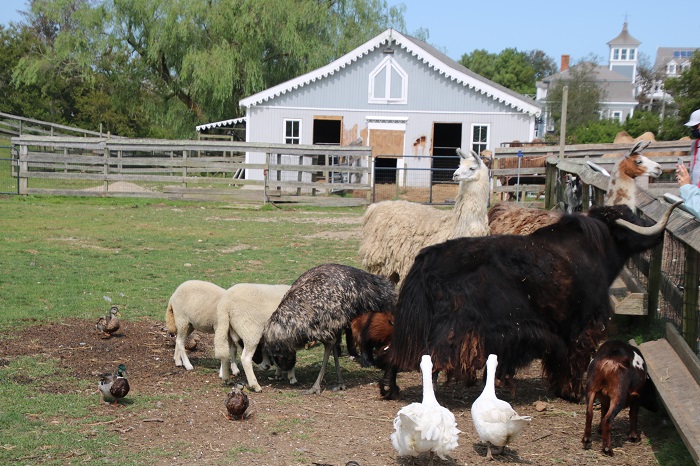 I have always loved turtles and this one is a big boy, upwards of 40lbs.    He was quite interested in getting some sort of handout and raced, as much as a tortoise can race, over to greet me. 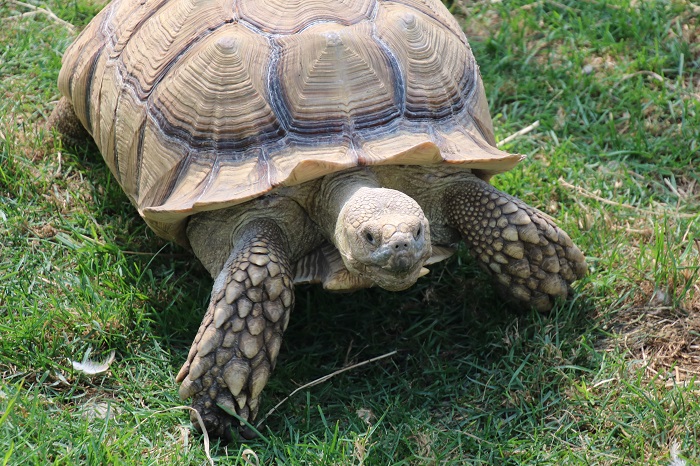 How about these horns? 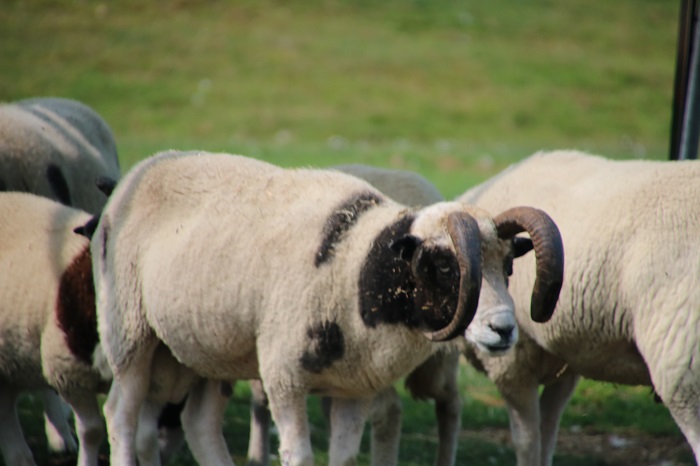 Reminds me of one of the characters in the movie by Monty Python.   Not sure but I seem to recall his name as Kim. 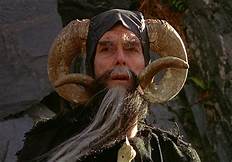 Of course, what zoo is complete without a camel? 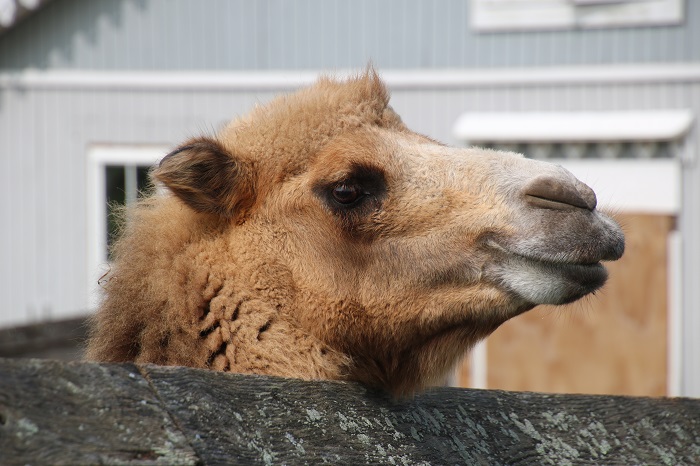 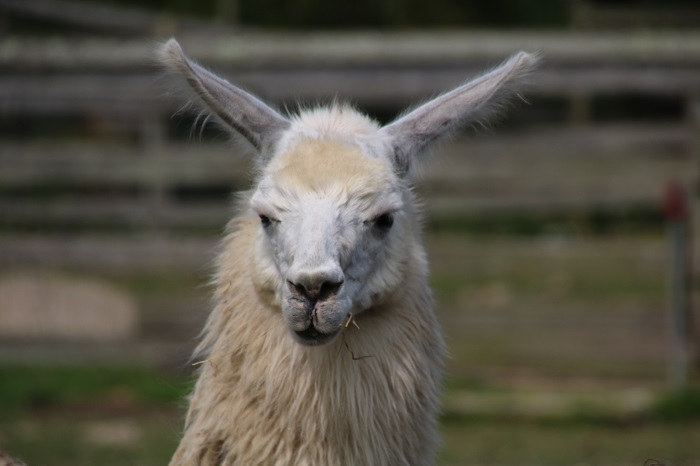 Unfortunately,  all is not peaches and cream at the zoo.  This crane, was being tormented by a particularly aggressive goose who kept bugging him, squawked and flapped noisily. 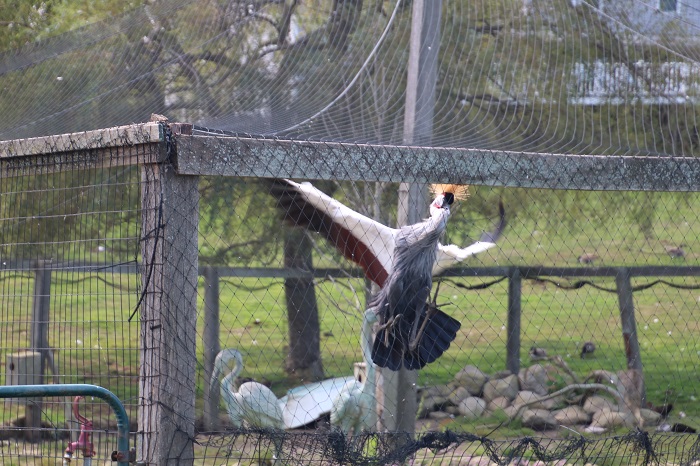 Later, a much happier egret, checking us out on the dock. 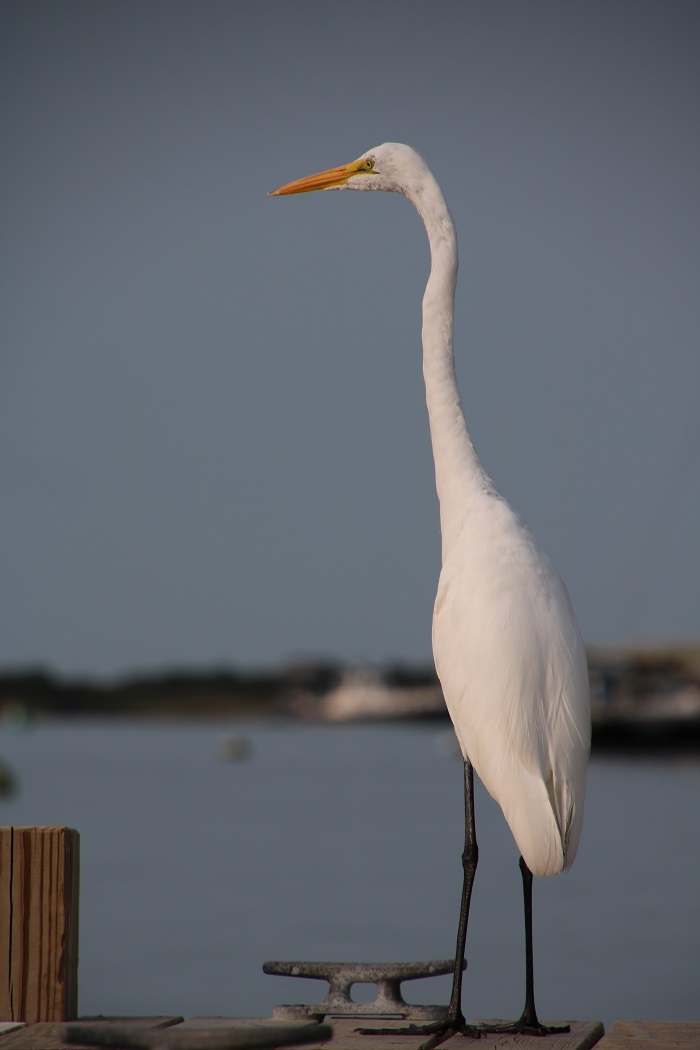 When Craig and I headed out earlier in the week, the wind was strong and directly from the SE, which didn’t leave much choice of where to go.  We opted to head to Mattituck, a tiny harbor at the end of a 1.5 mile twisting channel on the North Fork of Long Island.   I had not been there for years and never with Pandora.  The channel has some very shallow parts so we were sure to head there at high tide.  No problem, and we never saw less than about 8-9′.  However, at low tide, I am certain that we would have run aground.  There is a small anchorage at the end of the channel that is kept open for anchoring boats.   It was disappointing to see that a few moorings have been placed, limiting room for anchoring but we were able to find a spot.

A short walk brought us into town.   Not a lot of action but we did have to wait for coffee and a muffin that we ate outside on the sidewalk, socially distanced of course.   I was impressed that everyone we encountered was wearing a mask.   It was encouraging.   There was a terrific grocery and also well stocked cheese shop.   Eating out didn’t seem like a good idea but we ate well aboard. 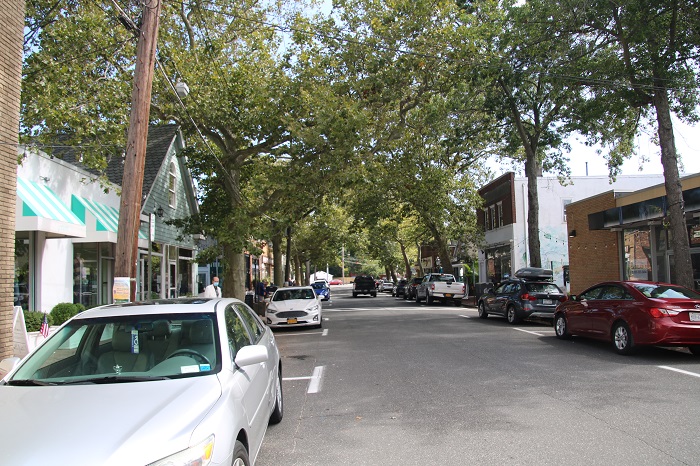 Years ago Brenda and I had “discovered” nearby Shinn Vineyards, about a 1.5 mile walk outside of town on lovely country roads.   We have visited the vineyard by boat a few times.  We also stayed in their B&B for a long weekend during a snowstorm once, taking advantage of a winter special, complete with wine, of course, and wonderful food.  The vineyard has changed hands now and much has been done to make it even nicer. 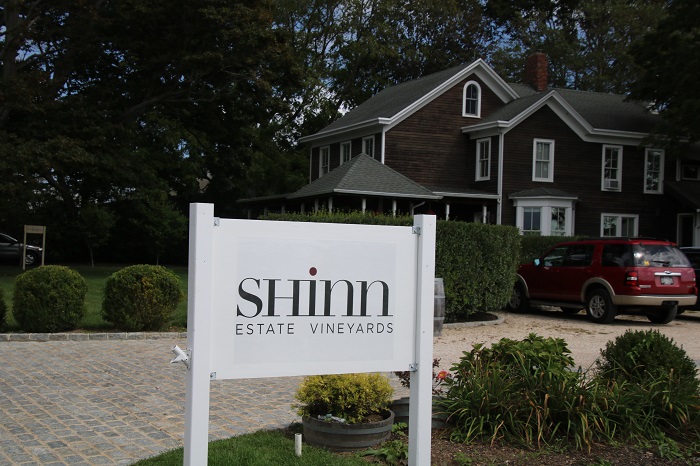 Craig and I ordered a bottle of wine, cheese and bread.  All the basic food groups. 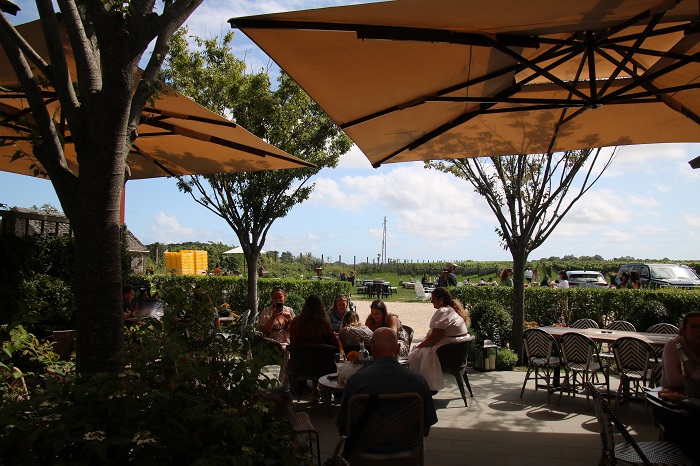 I thought that these chairs were pretty neat.  Wonder how they keep them from getting filthy on the lawn. 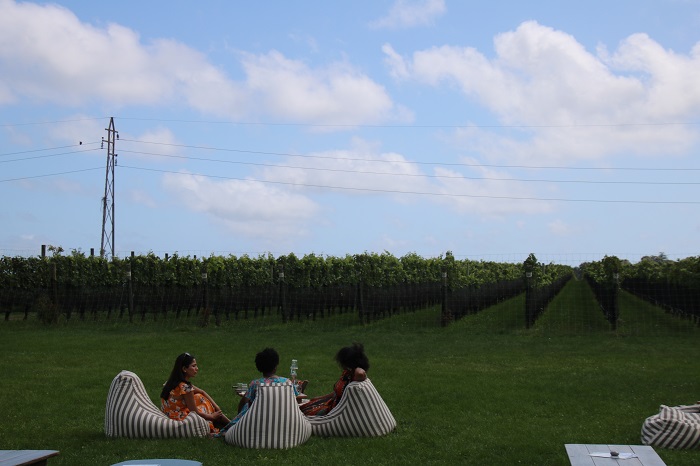 The rows of grape vines were meticulously trimmed and shielded with webbing from marauding birds.  The amount of labor that goes into producing wine is remarkable.    And, to make things even more complicated, Shinn is an organic vineyard.   Having  seen so many vineyards in CA that had no grass or weeds at all between the vines, everything burned out by herbicide, made me appreciate the difference here. 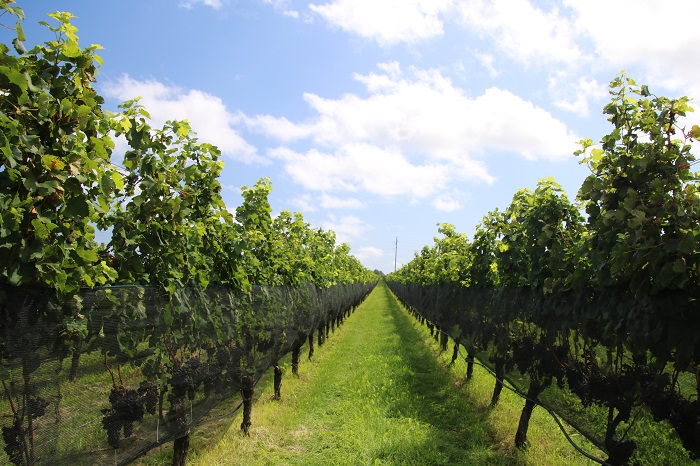 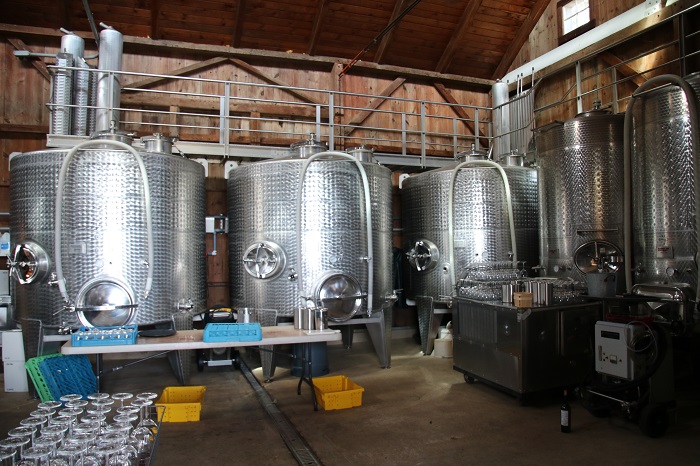 Tonight Newport and Thursday off to Wickford and a mooring at the Wickford Yacht Club where I will leave Pandora while we head home in a rental car.  On Monday, Brenda and I will head back to Pandora for the last hurrah before Pandora is hauled for the winter.  I have written in past posts about all the projects that are lined up for the winter, both aboard Pandora and at home.   It’s going to be a busy winter.

And that’s good as my mother used to quote, allegedly from Mao, “busy people are happy people”, and busy I’ll be.  And that’s good, as I really don’t want to have time to think about the warm weather of the Caribbean that I’ll be trading for what I hope won’t be a harsh New England winter.

The good news though, is that our son Chris, his partner Melody and their dog Mila are settling in nicely at our home with everyone sharing in the housework, cooking and grocery shopping.  Mila isn’t much of a cook and is spending much of her time on the back deck, concentrating on keeping all the birds and squirrels in their place.

Hopefully after a winter with us they will decide that moving back to California isn’t a good idea.  With wild fires raging everywhere, the ever present risk of earthquakes and, these days, pestilence, perhaps they will decide that boring New England might seem like a good place to stay.  It would be nice to have them nearby.  One can always hope.

One thing that is certain though… summer is over.   Here in Block Island, the crowds have gone and the harbor is nearly empty.  It’s hard to believe that only a few weeks ago this place was hopping.

If you listen carefully, you can almost hear the iron gates of summer slamming shut…

Me, I really want to do what I can to wring a bit more time out of this season. I sure hope I don’t get bruised by that slamming gate.

One response to “Listen carefully and you can hear the gates slam shut.”