Yesterday we left Beaufort SC after several wonderful days exploring the city and enjoying the local eateries.  Brenda and I really loved it, the food, homes.  Such a nice city.  What was even better is that the temperature has finally warmed up into the 70s and we didn’t even have to turn on the heat.  The last two days are the first since about a week prior to our friend Sandy that it has actually warmed up to something that is compatible with palm trees.

I can hardly decide where to begin with the wonderful architecture.  We went for a number of walks and spied these, and many other, fabulous homes.

It’s just wonderful to see the live oaks draped with Spanish Moss.  Some of the trees are too big and sprawling to imagine them staying up in a hurricane.  They are so stately and individual that you have to believe that the locals might be inclined to name each one.  How about this one hanging out over the street.  The last time that I saw a tree marked with sign on a road was in the Redwood forests in California where the tree had been carved out so you could drive a car through it. 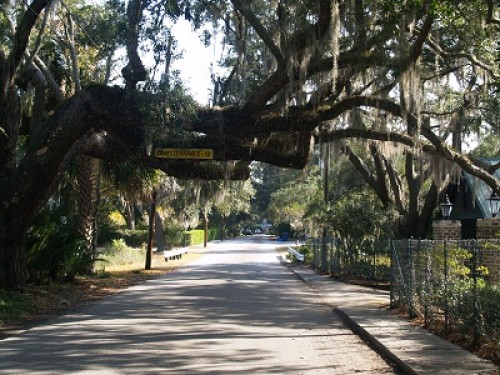 It’s hard to say where I should begin in posting about these houses.  Somehow, stucco doesn’t look tacky here like it does in NJ.  Far from it. 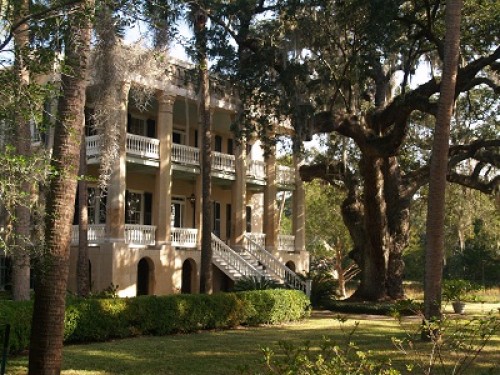 Just like in Charleston, the locals must get a bonus or painting their homes white. 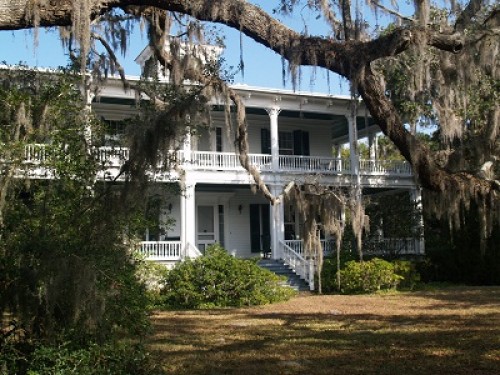 You can just imagine a horse and carriage driving up to drop off the owner here. 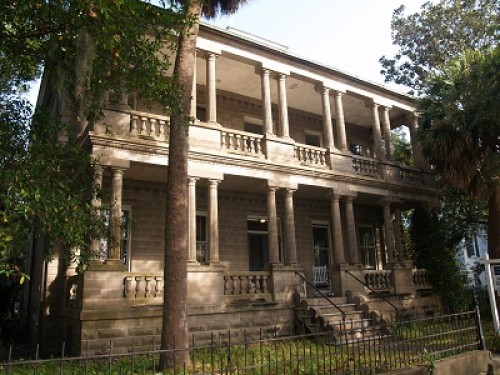 Not all the homes are old.  There are some lovely “contemporary” homes too.   Not to be picky but it would be even better if the posts on the porch were a bit more substantial.   But then, perhaps it’s just me.  Agree? 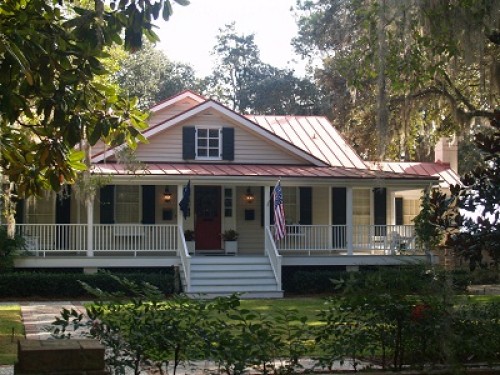 We were told that one of the homes in the area was used in the movies “The Big Chill” and “The Great Santini”.  I thought that I had taken a photo of the right one but I am not sure.  We thought that this was the one. 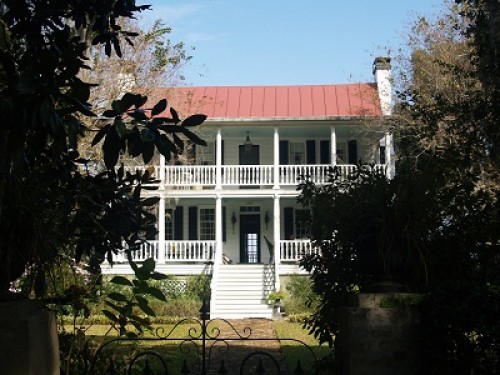 I looked it up on the Web and see that this is the one credited with being in the two movies.   Not sure if I have a shot as it looks a lot like others that I saw.  Oh well, we saw a lot of great homes. 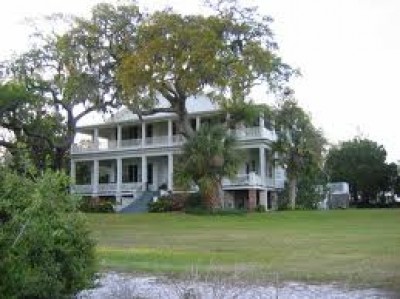 I loved this one.  The trees and gardens just swallow up the home in spite of it’s size. 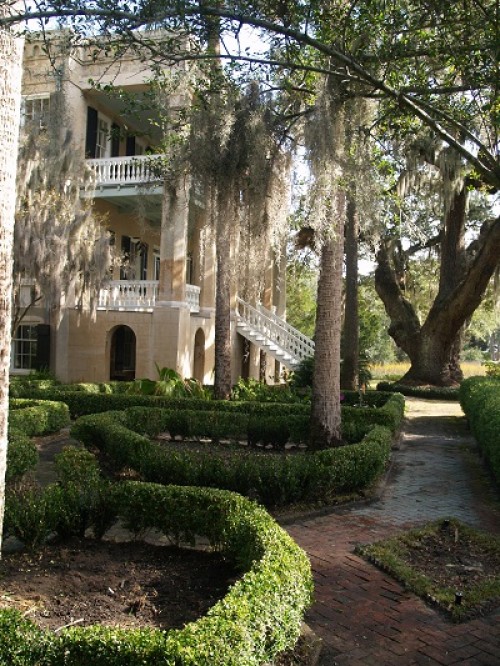 Speaking of a nice setting, how about this perched on a lovely marsh.   To come home to this means that you have arrived in more ways than one. 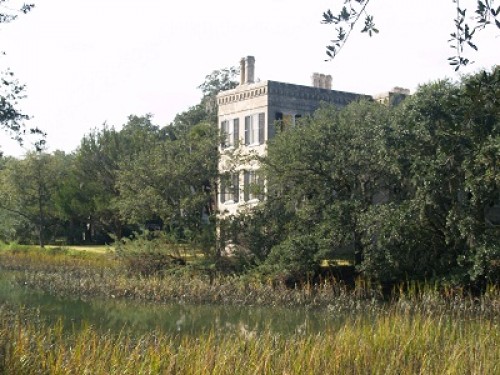 This one was nicely nestled into the landscape.   Sitting on that rocker wouldn’t be tough duty. 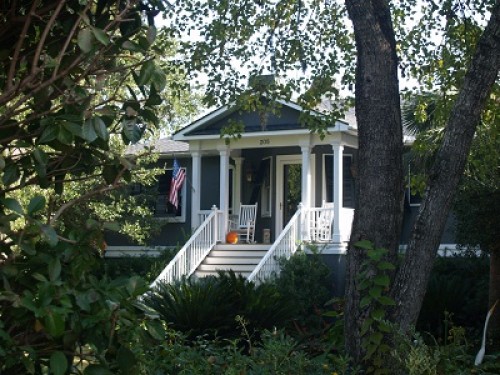 We saw some great gardens but none that could rival this one.  The photo doesn’t do it justice. 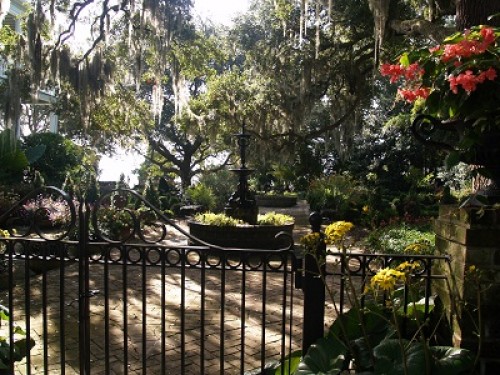 There is a strong military presence with two bases nearby and a national military cemetery in town.   We were there on Veteran’s Day and were treated to a first class parade. 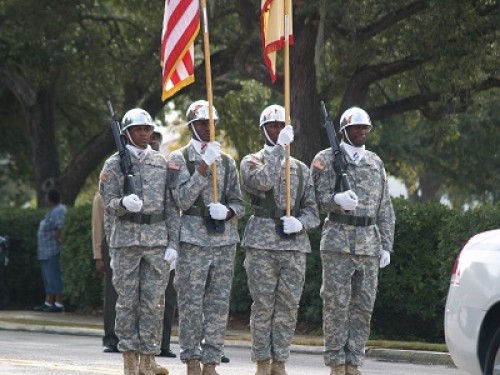 It’s great to see folks from the service in dress uniforms. 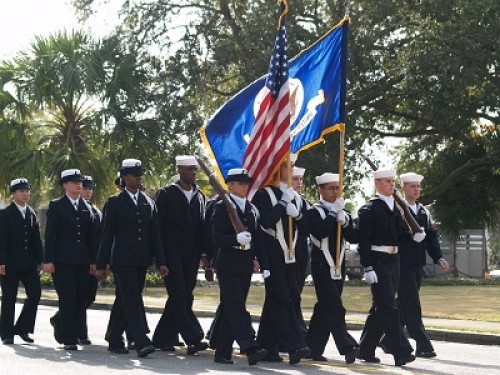 Each branch of the service was represented. 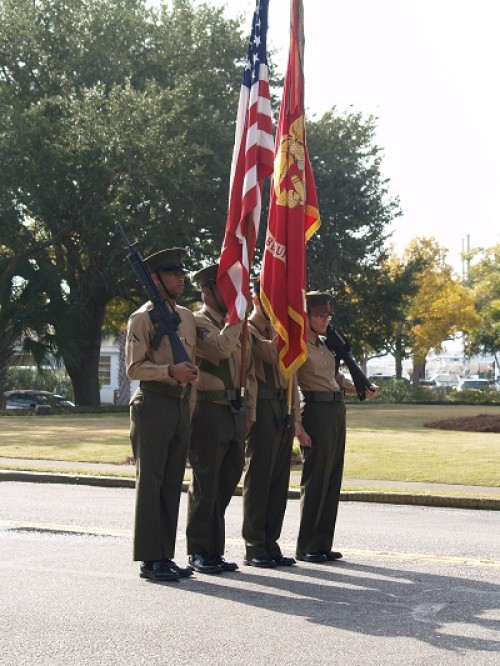 After enjoying the parade we did a bit of shopping in the local gourmet store.  Compared to prices in the New York area, this was a downright bargain.   What a great looking store.  I think that we bought one of everything in the store.  Perhaps not but we did buy plenty.  Not a great idea to shop when you are hungry. 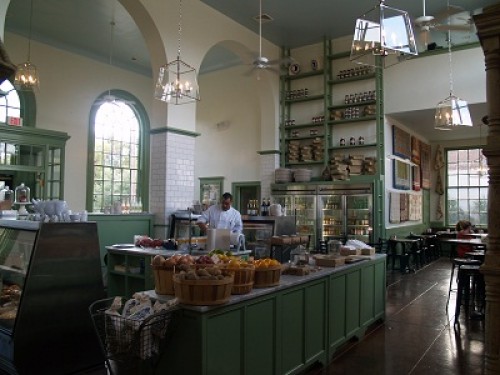 Beaufort goes out of it’s way to encourage folks to visit.  The waterfront has a great park that is very popular.  There are plenty of places to eat that look out on this lovely scene.  I still haven’t gotten used to the palms that are everywhere. 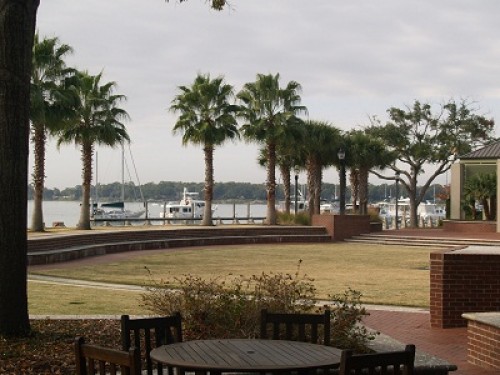 As I write this we are tied up at the city docks in Savannah GA.  It’s hard to believe that we have made it all the way to Georgia.  Massive ships go by and the river isn’t that wide here.  As you can imagine, the current runs very hard.  As we were about a 1/2 mile from our destination today we snagged something big on our prop and it tangled it up badly. As  a result we were dead in the water.  Happily, we were traveling for the last two days with another boat and they towed us to the dock.

As soon as the tide is slack I plan on going swimming with my wet suit and dive compressor to untangle whatever is wrapped.  That should be fun in the 65 degree water.  Oh yea, did I mention that the visibility is about 6″?   Wish me luck.

And yes, the two cities, one in North and the other in South Carolina, are spelled the same but the pronunciation is much different.    So, we enjoyed both cities and it was fun to visit Beaufort.  That’s Byoofert to y0oou.

I guess it’s almost time for a dip in the Savannah river.  Yuck!  Make that a double yuck.