Heading to New England. Where next?

As I write this Pandora and crew are anchored in Chesapeake City, a tiny harbor of refuge at the western end of the C&D canal.

The town is impossibly quaint, with a main street lined with colonial homes.  The view from Pandora this morning was a wonderful way to begin the day.  I have been here many times, stopping for at least one night when I am heading south or north.    Brenda and I passed this way together in 2012 on our first big voyage south together.  I wrote about that “historic” visit in this post.   That visit was particularly memorable as a large storm lashed the NE while we were here causing much flooding. 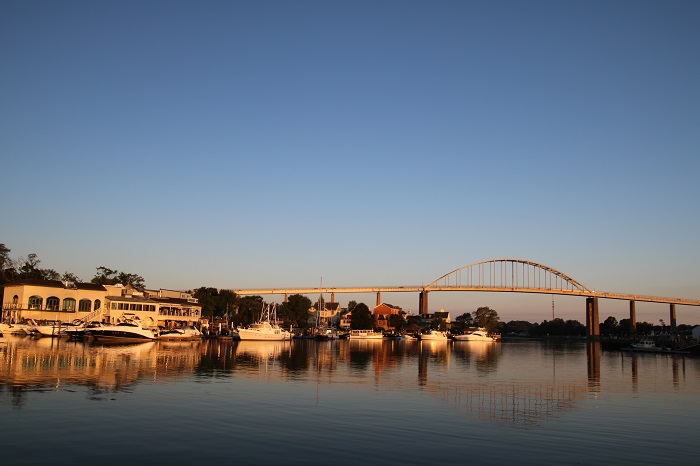 I expect to spend two days anchored here, waiting for favorable winds before we head down Delaware Bay and up toward Montauk and Long Island Sound.

The forecast suggests that we will pick up favorable winds, if light, for the run north as we turn the corner at the mouth of the Delaware late Friday or early Saturday morning.

Getting a good feel for the wind has been a challenge as each day’s forecast is very different than the last but now that we are very close to our departure, tomorrow, things are beginning to settle down.  Light winds, shifting from one direction to the other is standard for this time of year in spite of the generally prevailing direction of SW but we hope to at least have favorable, if light, winds.  I’ll be sure to have plenty of fuel aboard as I expect that we will be running the engine quite a bit.

The total run from our starting point near Annapolis is about 350 miles a distance that way-back-when, would have seemed like an epic voyage.  However, after years of 1,500 mile runs, this run seems more like a day sail.

As we headed north from Annapolis yesterday the winds were very calm and the bay, more like a lake.    The afternoon clouds began to look quite impressive but we never saw any rain. 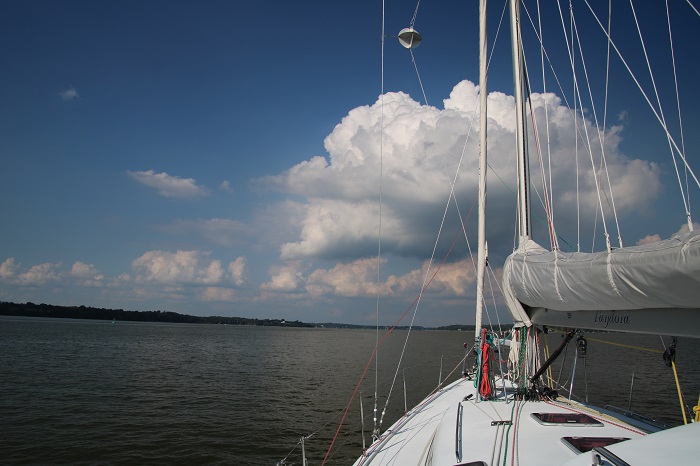 Along the way we passed some really palatial homes with acres of perfectly manicured grass.   Some homes looked like they had been there for generations. 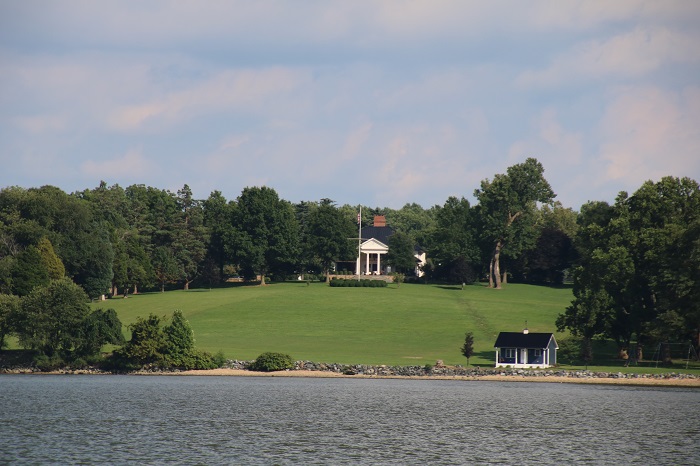 Some more like a sprawling and not so “micro mansion”. 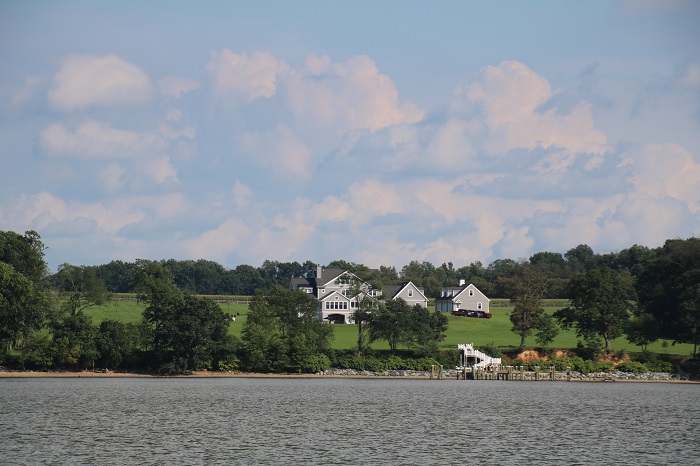 Of course, osprey nests on just about ever navigation mark. 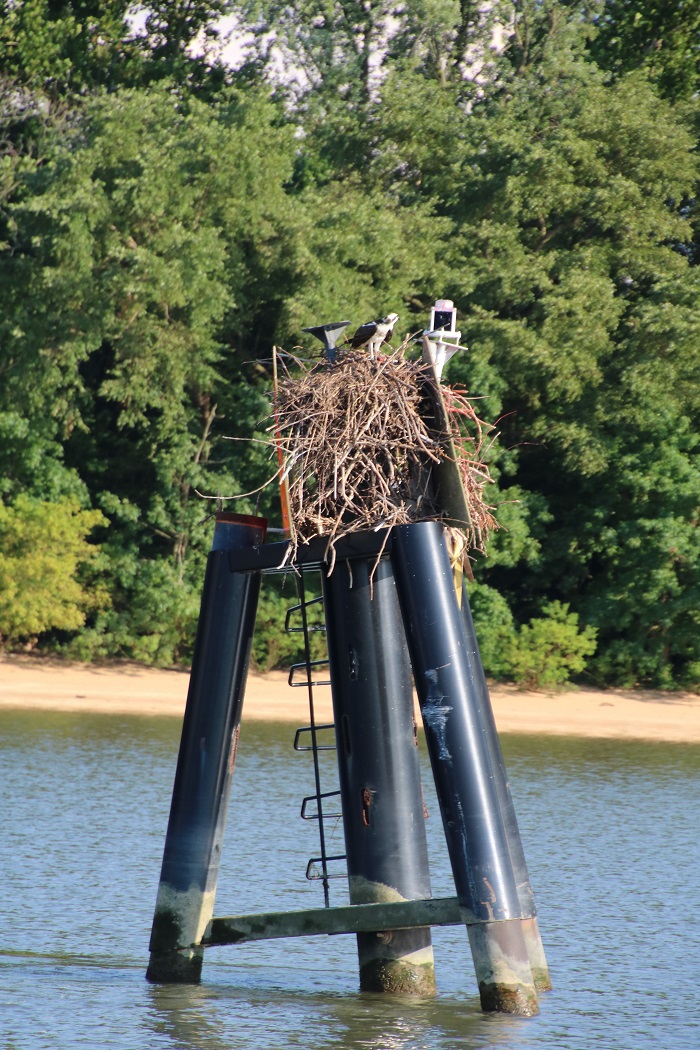 As we approached our destination and the entrance to the canal, a lovely sun dipping toward the horizon in our wake. 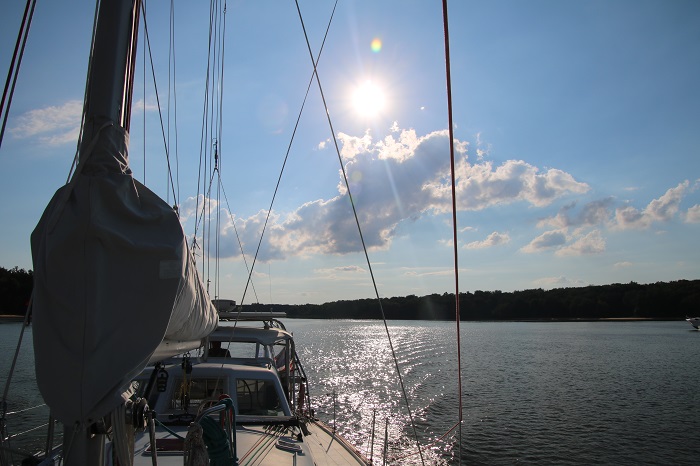 The more obvious landmark in the town is this bridge that looms over the downtown area. 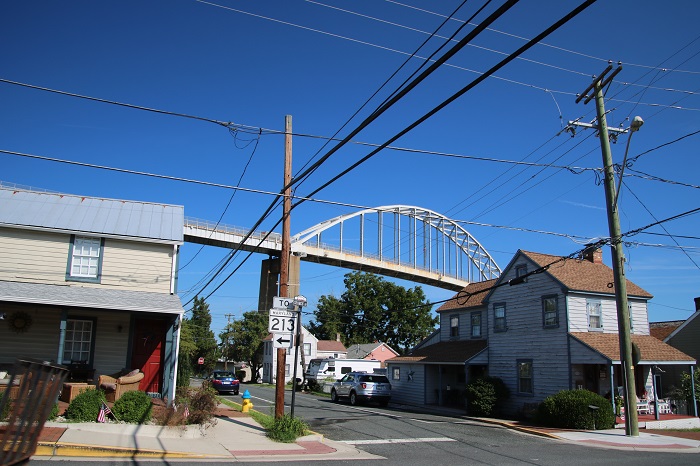 Of course, what post is complete without a view of Pandora.  We have the anchorage nearly to ourselves. 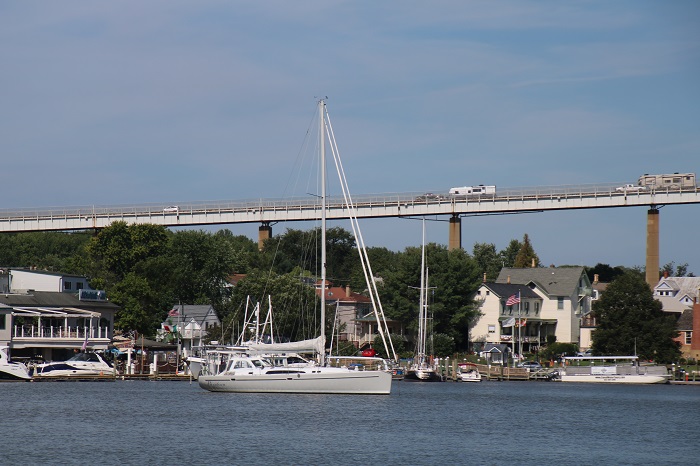 I have mentioned that both AC units aboard have been replaced the forward one in FL and the aft, a much more complex installation, by  me personally while the boat was in Annapolis.   I still have to install a unit that will smooth out the amp spike when the aft unit cycles so that I can use my small Honda generator to keep us cool when we are desperate and want to use the AC while at anchor.

That small generator is pretty noisy and will surely upset our neighbors so I am exploring some sort of sound enclosure that I can put over it.  I have been looking at some foam products that McMaster Carr, an industrial supplier, sells and will report back on what I come up with.  It’s not really reasonable to run the generator in a crowded harbor as it’s just too noisy but if I can muffle the sound with a proper enclosure, that will make it practical.  We’ll see.

I also had the aft AC unit wired to run, when we are under power, using my inverter driven off of our 200 amp high output alternator.   Yesterday was the first time I used it that way since the installer visited to hook things up.  It worked perfectly and what a treat to run both AC units while under power.  It was quite very cool down below and quite “yacht-like”, I have to say.    Decadent, actually.

Brenda and I had hoped to get our granddaughter Tori and son Rob out on Pandora for a few days while Pandora was in Annapolis but anxieties of the virus conspired against us so I finally just decided to bag it and head to New England.

I am looking forward to doing some local cruising if I can and now that Brenda’s book is at the publisher after a decade of work, perhaps she’ll agree to a “cruise”.

Hopefully the “fun” of the spring escape from the Caribbean will soon become a distant memory.  So far, not much luck on that front.

So, where will Pandora be going next?  Well, New England at least.  Heading south?   Now, that’s another story and I have no idea.

Fingers crossed but I fear that the state of the pandemic isn’t giving me hope that things will be under control any time soon.

Oh boy, I can hardly wait to be housebound all winter. Hope I’m not…

2 responses to “Heading to New England. Where next?”