Pandora is still in Ft Pierce and I will be heading there next weekend to bring her to Annapolis with my friend Dick.  Brenda and I buddy-boated with him and his wife Anne years ago when we first headed south and spent time in the Bahamas.

At the time Anne and Dick owned Nati, a catamaran that they lived aboard for a number of years before “swallowing the anchor” and moving ashore to Florida where they live now.

The Bahamas, where we met Anne and Dick, was our first winter adventure after heading to Florida via the ICW, Intra Coastal Waterway.  Since then, we have sailed many thousands of miles and visited places I never imagined we would go, much less do so aboard our own boat.  Cuba? Who knew?

This is “old” Pandora anchored off of Chubb island shortly after clearing into the Bahamas back in 2014. 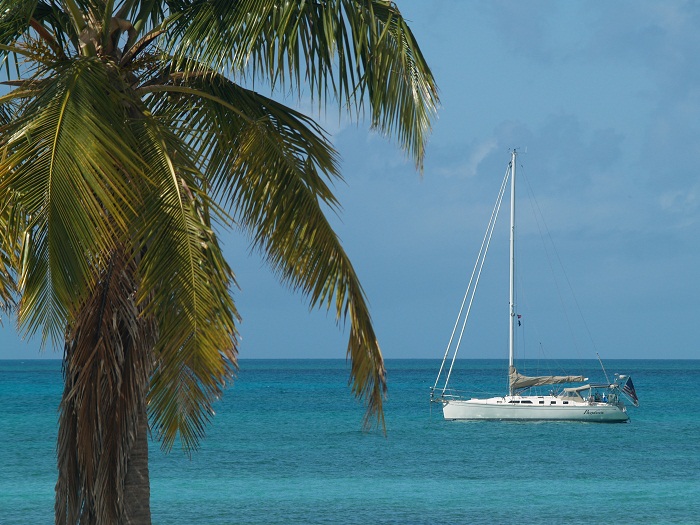 It seems like just yesterday when we spent months with Anne and Dick moving from place to place in the Bahamas.   I guess that Dick never listened to his mother who surely told him NEVER to stand up in a moving vehicle.  “Down boy, down boy!”   With Anne aboard at least she kept him moving at a stately pace. 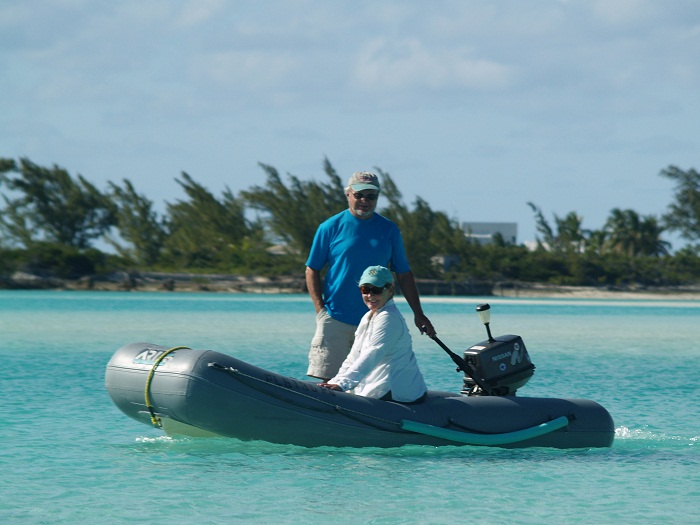 At that time we owned our “old” Pandora, a SAGA 43.  She heeled a LOT and to sail along with Nati, a cat that was always level and smooth, was totally annoying, especially to Brenda who often felt she was hanging on for dear life as I pushed Pandora to try and keep up.  While we had to stow everything that wasn’t nailed down, Anne and Dick would just wave to us while taking at tiny sip of coffee as they glided serenely by. 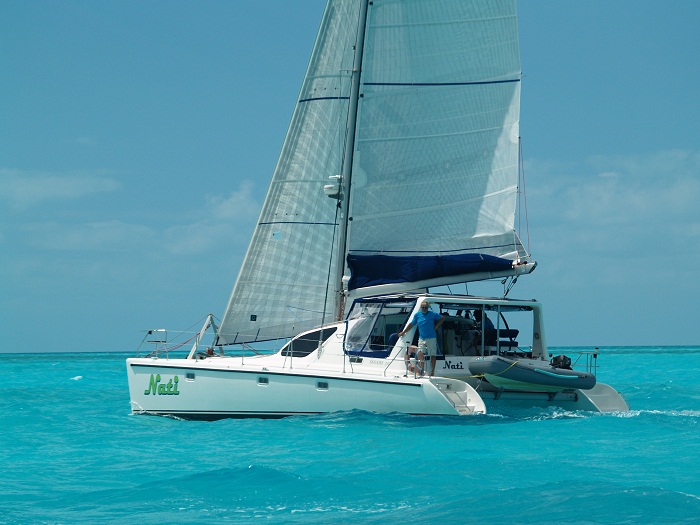 We did a lot more fishing back in those days.  Now, I am less inclined to get all the blood and guts aboard as we have found that the biggest problem with fishing is that we catch stuff and when landed I wonder how I am going to deal with ALL THAT FISH.  This was one of my biggest catches that year, a Mahi Mahi.  Notice the beginning of the whole “blood and guts” thing on the cockpit settee. 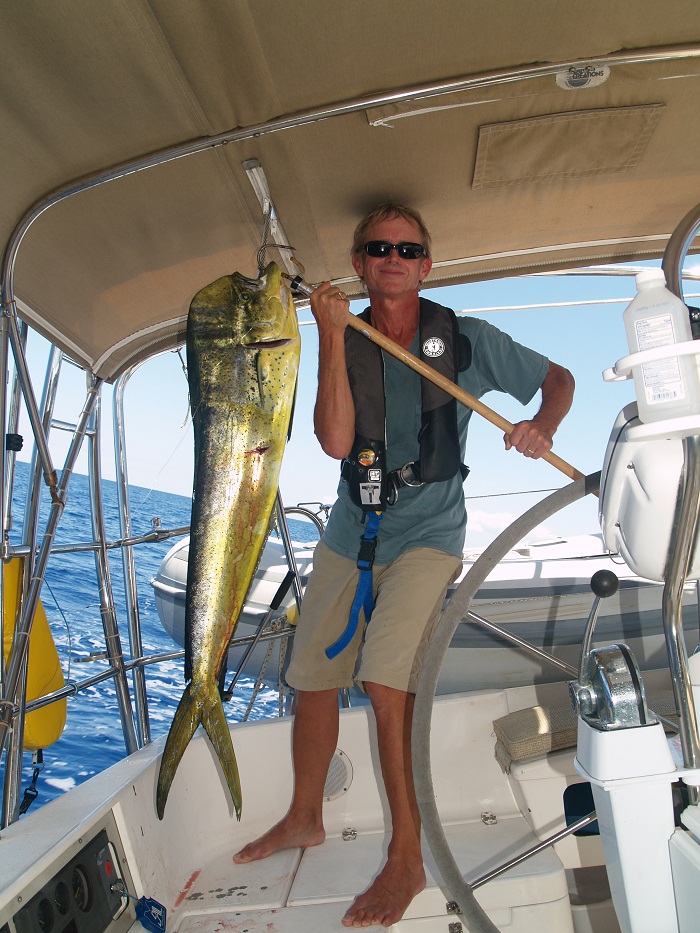 We all had a bit more hair back in those days.  Well, at least it was a lot better distributed.  I guess I’ll have to wait and see about Dick and how his mane has fared.  In terms of sheer volume, my hair is pretty long these days as I haven’t had a “professional” haircut since February but somehow it has become distributed differently, a sort of gravitational migration leaving my own personal “north pole” mostly vegetation free.

I still remember when I had my very first “outdoor” haircut that year in Black Point, Long Island.  It was only time I ever spotted a ray while I was getting a hair cut.  This isn’t me ‘under the knife”, but you get the idea.   That’s Ida, doing the cutting.   And, of course, back in those days, see the guy with the laptop, the only way to get email was to go to a hotspot as cellular Wifi was not as usable as it is these days.  Every day was a scavenger hunt for connectivity. 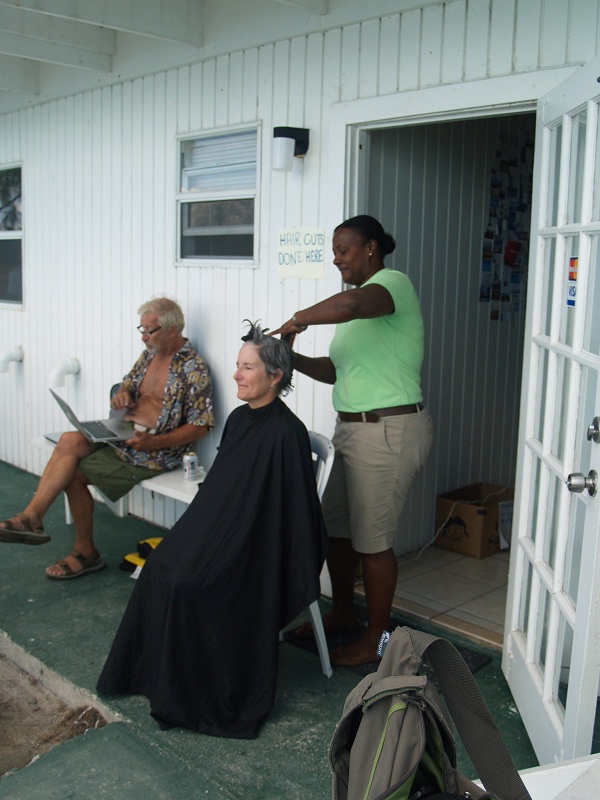 And, later that same year, a random sighting of what would one day be our current Pandora on a mooring in Newport RI.  We never imagined that we would one day own her ourselves. 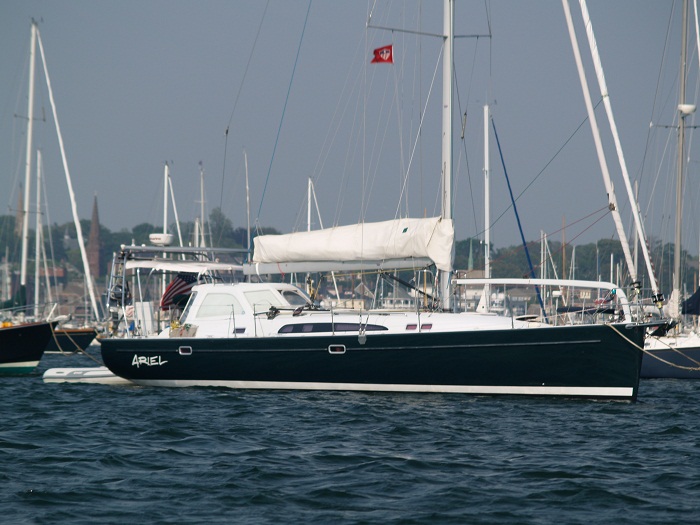 So, off to Florida and Pandora in less than a week.  And, while I am not enthusiastic about getting on a flight, that’s exactly what I am doing next weekend.   You can bet that I’ll be fortified with my slightly used N95 mask, germicidal wipes, killer spray, hand sanitizer, my own food and well, you know the drill.  Actually, my hope is that EVERYONE else on the plane knows th drill and takes it seriously.  If not, it will be my last flight for a very long time.  Bad flight or not, I hope that I don’t become “positive”, which I suppose could make it my “very last flight, ever” which would be very bad.  Based on our experience in Florida when we arrived there last month aboard Pandora, I am not optimistic about the “locals” taking the risk seriously.

And, fast forward to the fall, am hoping against hope that we will be heading south again but it’s very hard to say what will happen next as Brenda isn’t crazy about that idea and with the pandemic still a threat and no certainty about what island to island travel will look like, who knows…

I guess I shouldn’t stress too much about what the future holds as there is really no way to know what that might look like.   For sure, it will surprise and delight me, if history us any guide, and to think back to that winter in the Bahamas, a lot has happened that I would never have predicted anyway.

It’s been a few years since I have seen Dick too so it will be fun to spend time together.  Perhaps he will have some answers.  Dick?

Here’s to the great unknown and wondering where Pandora will take me next.

Well, the “next” it seems will be Annapolis with a few stops along the way.

Stay tuned and you will be the second to know.