After much back and forth about how we will be getting Pandora back to the US, Brenda and I have decided that the best option is just for the two of us to make the run ourselves.

It’s been a tough call as Brenda does not do well when things are rough as she is so prone to motion sickness.  We have found that the Scope patch is sorta, kinda, pretty good for her, even though it gives here a pretty bad sore throat.   For most, seasickness tends to go away after a few days but Brenda’s longest run wasn’t long enough to try that theory out .   For sure, this run will test that hypothesis.  Fingers crossed.

Brenda, and others who have suffered from mal de mer, say that “at first you feel like you are going to die and then fear that you won’t”.   Not her first choice, to be sure.   So, what to do?

So, what about the trip?  We spoke with our weather router, Chris Parker a few days ago to see what we can do to make the run the least uncomfortable for Brenda.  As we have been working with him for nearly 8 years, he knows Brenda well and is very sympathetic. His suggestion remains for us to take the southern route via the Old Bahamas Channel to Florida, basically 1,000 due mile west from here.

The problem is that the wind, beginning this weekend, is forecast to be very light, too light for sailing, for much of the route.   However, Chris holds out hope that if we wait a few days longer, perhaps until the middle of next week, that there will be more favorable wind and we will be able to sail more of the run, perhaps much of it.  Having wind is very important as we simply do not have enough fuel to make the entire run under power.  Experience tells me that if I manage things well I should be able to make as much as 3/4 of the 1,100 miles to our destination under power.

As recently as last fall, on my run south to Antigua, winds were quite light and contrary and I was under power for over 100 hours.  I can tell you that the anxiety about running out of fuel was all consuming and I have no interest in going through that again on this trip.

Light wind or not, it’s hard to forecast the weather even one week out.  However, with weather, a week is a long time and it’s highly likely that we will get some wind as long as we choose our departure date carefully.

We do know that Brenda is most uncomfortable when we are off the wind in rough conditions (isn’t just about everyone?) so leaving here when the winds are behind us makes sense.  Having said that, it is also a good idea to plan things so that there won’t be wind of more than 20kts behind us as above those speeds is what causes her the most discomfort.

Ideally, we will want to leave with a good wind forecast to allow us to do well for at least the first few days and allow us to put some miles “in the bank” before we have to rely more on the engine.

The winds south of the Bahamas, our planned route, are nearly always from an easterly direction so it’s not likely that we will be dealing with adverse winds until perhaps as we approach Florida where fronts exiting the US east coast can bring adverse clocking conditions.

One way or the other, it’s just me and Brenda to make the trip so we will just have to work through this, something that we have been doing together for nearly 50 years so I’m sure that we will again muddle our way.

So here we sit, and over the next few days we will just have to hang out and be ready for a quick escape as soon as conditions are right.   I plan on calling Chris again in a day or so to check on his “Brenda forecast”.  While we recieve a general forecast via email each day, speaking to him directly is good for Brenda as it gives her the feeling of Chris’s hand on her shoulder and, to her, it’s like him saying “Brenda, it’s going to be OK.”

That’s it, we are counting on you Chris so give us a good forecast and soon.

For now, we’re here in St Johns, a lovely spot with lovely beaches to walk on and water so clear you can see 40′ down. 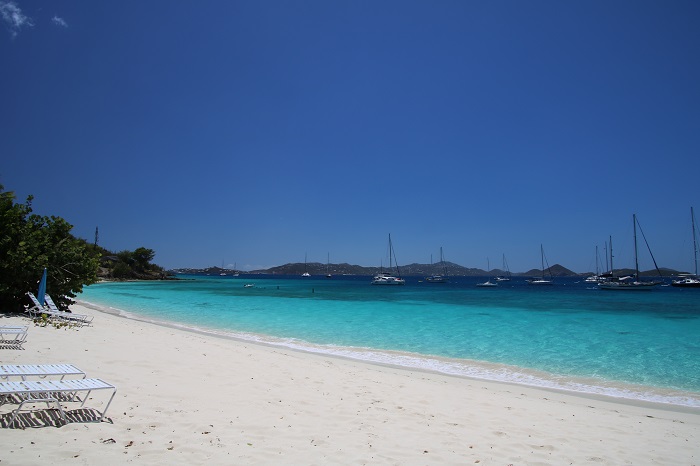 And sunsets that will take your breath away. 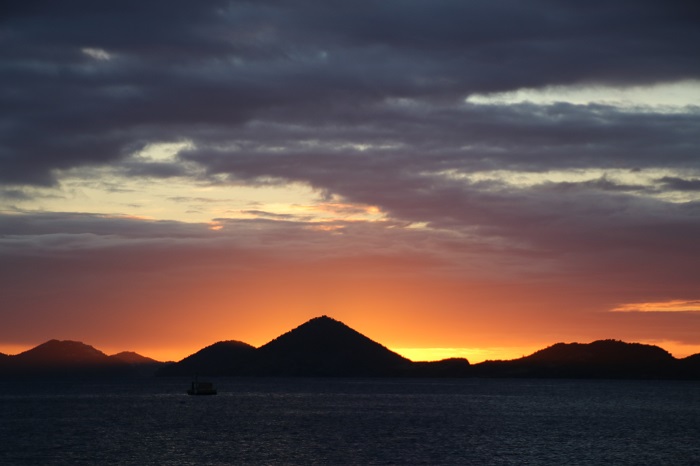 Remember, the Salty Dawg Flotilla has a tracking map compliments of Predict Wind, to help you keep track of where all of the boats are as they leave each week for the US.   Note that the map has a listing of all the boats down the right side of the screen so you can click on Pandora to see where she is and what her speed and course are.

To date, there are over 200 boats signed up to participate in the Salty Dawg Flotilla to the US, a great example of Cruisers helping Cruisers during this difficult time.  I am glad to be a part of this effort and hope that I NEVER have to be involved with something like this again.  Just sayin…

We’d love to be home but here we wait…