As I write this we have moved Pandora to Deep Bay, a small harbor right next door to St John, the main commercial port for Antigua.

We moved here today as St John is the only place where we can clear out of Antigua.  Normally, we would be able to clear in English Harbor, near Falmouth where we have been, or in Jolly Harbor, near here.

However, we called the Antigua Coast Guard and were told that the only place to clear in and out now is St John and that they would arrange for an appointment  for 09:30 on Wednesday morning.

We were going to do some provisioning in Jolly after clearing out before we head to the USVI’s Thursday but we have decided that we have plenty of food to last for our run to the USVIs where we expect to arrive on Friday afternoon so we will just come back here.

So, tomorrow afternoon we will just hoist the dink aboard and prepare for our 200 mile offshore run to the USVIs.  We have been offered the use of a mooring in Red Hook, St Thomas, the same couple that has offered to receive the prescriptions that we had Fedexed to them from the US.

After all the back and forth on getting Brenda’s scrips delivered, we learned that there is a Walgreens pharmacy in St Thomas where we could have had her prescriptions filled.  Live and learn.

I expect that the provisioning in St Thomas will be better than here in Antigua so we have decided to pick up things for our run to FL there instead of trying to determine what we need now, two weeks before we plan on heading out to make our way to Florida.

Before we head out I thought that it would be fun to share some information about a spectacular schooner that is in the marina in Falmouth. 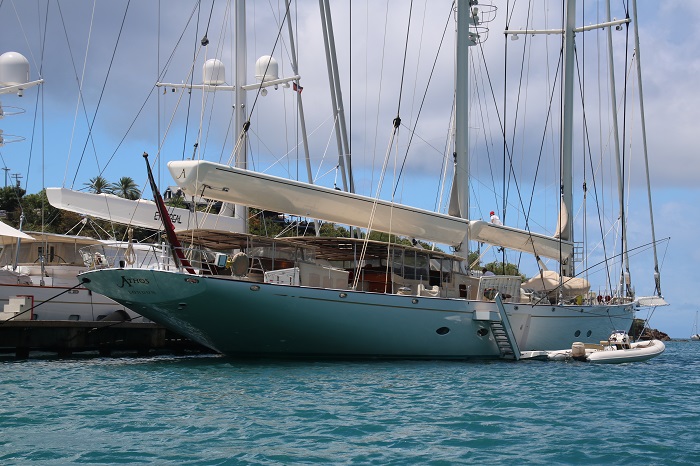 Her profile is pretty impressive and yet, she doesn’t look all that big against the mega-yacht dock.   No, I take that back, she looks huge. 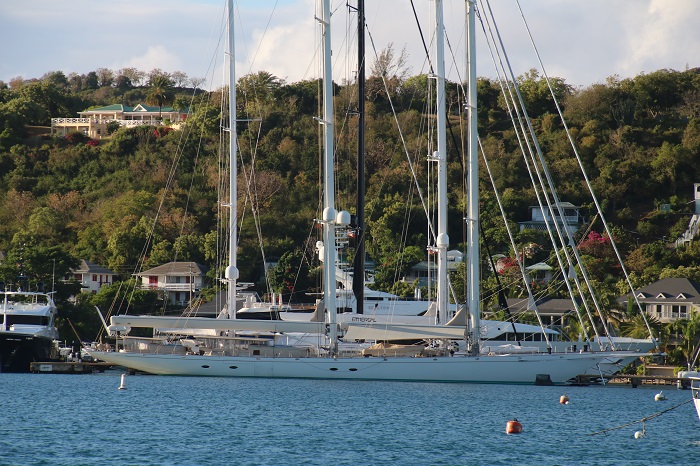 Her interior is very lush with cabins for ten guests.   Brenda would take one look into the cabin and say “I need a nap!” 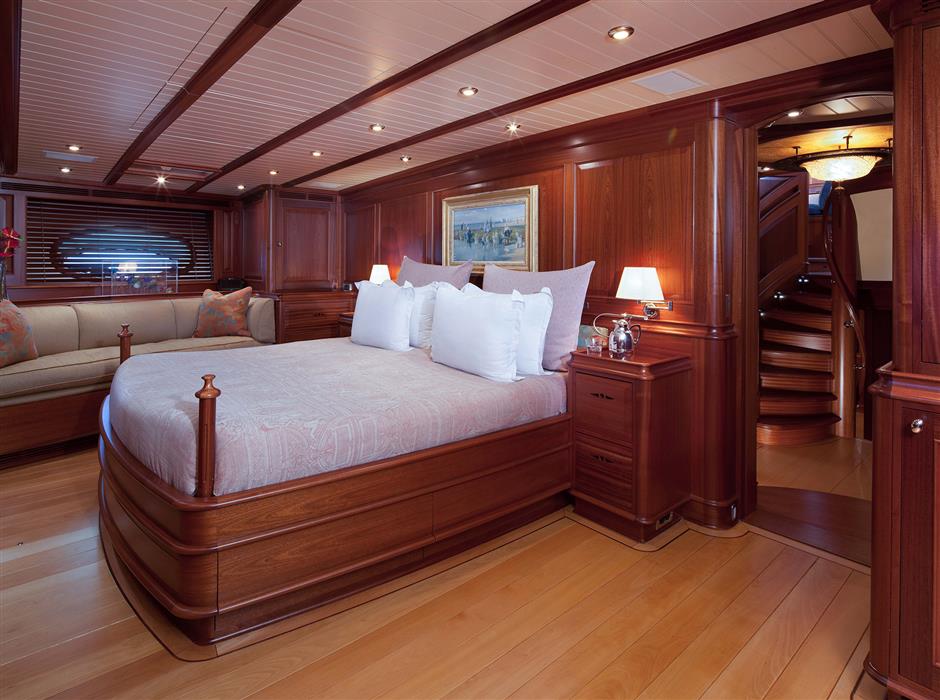 And his and her’s sinks.  Brenda would settle for nothing less, of course.  I’ll bet that these aren’t stinky potties.   It is remarkable how acute Brenda’s sense of smell has become when judging imagined smells aboard Pandora.   Why is that? 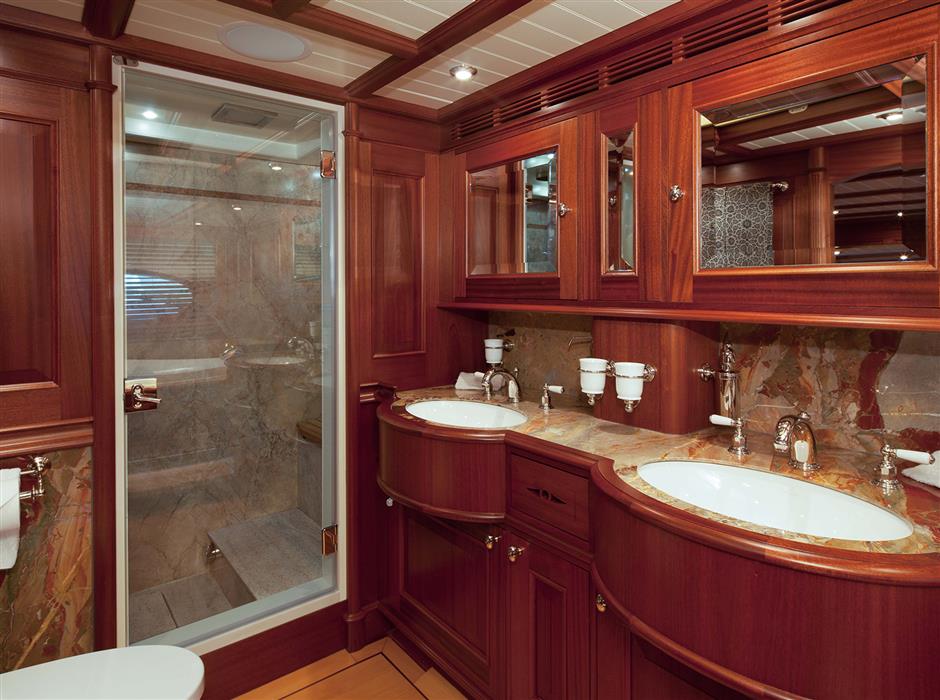 Not so sure about what she would say about this Pullman berth.  That’s perhaps the only thing that we have in common with Athos.  Aboard Pandora I am always stuck in the “airless corner”, against the wall.  No, wait, it wouldn’t be ANYTHING like Pandora as the AC would be blasting. 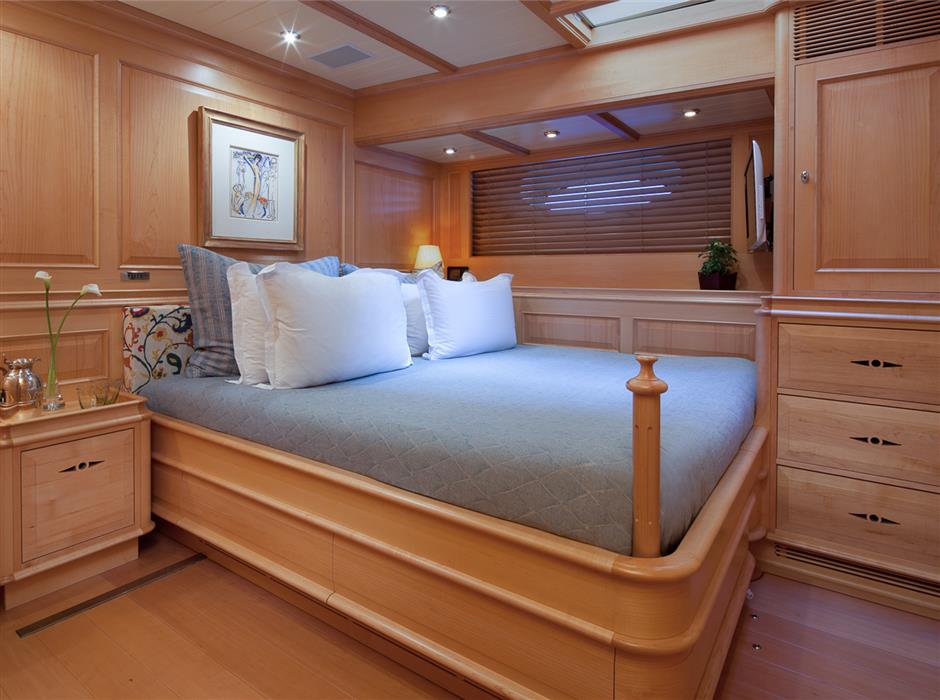 This would be a terrific cabin to host a visit from our “grandbaby-twins”, Emme and Rhett. 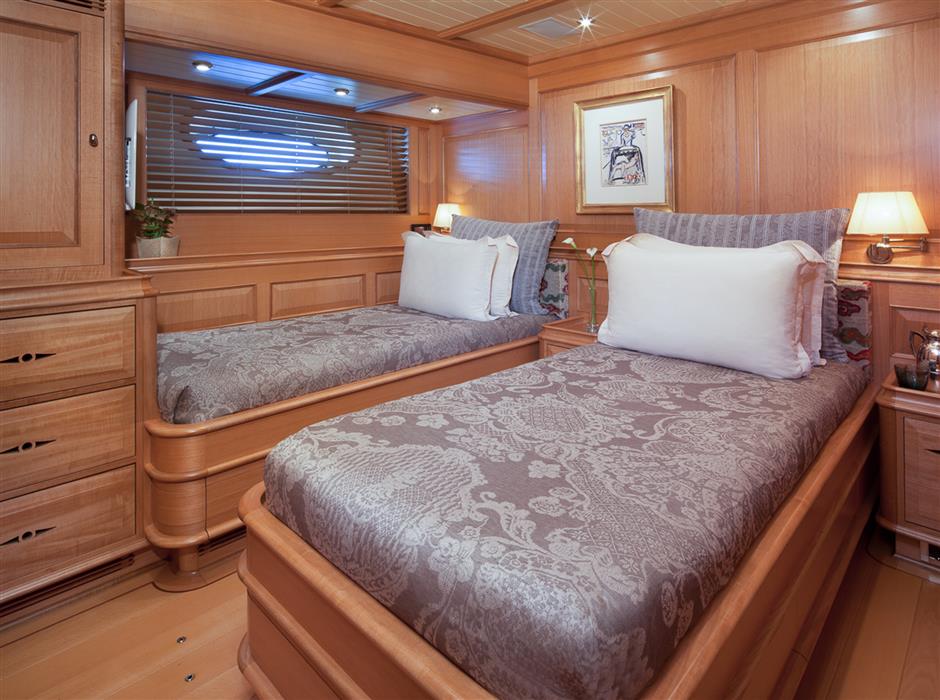 I would enjoy writing blog posts from this office.   Athos features satellite broadband internet, 24/7 at sea or in the harbor,  a service that I am told runs in neighborhood of $5,000/month.   And, I’ll bet that coffee cup doesn’t have mud in the bottom.  “Garcon, please fetch me a cafe late. without mud please.” 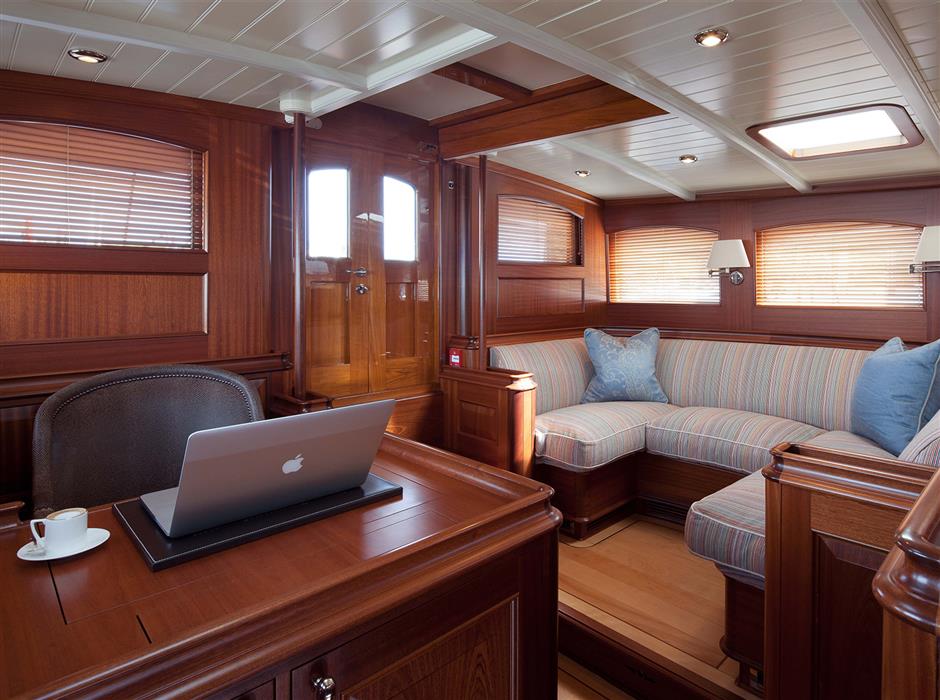 And, when it’s time for dinner.  Decisions, decisions, where to eat?  “I don’t like to eat in the cockpit.  It’s way too buggy outside!” 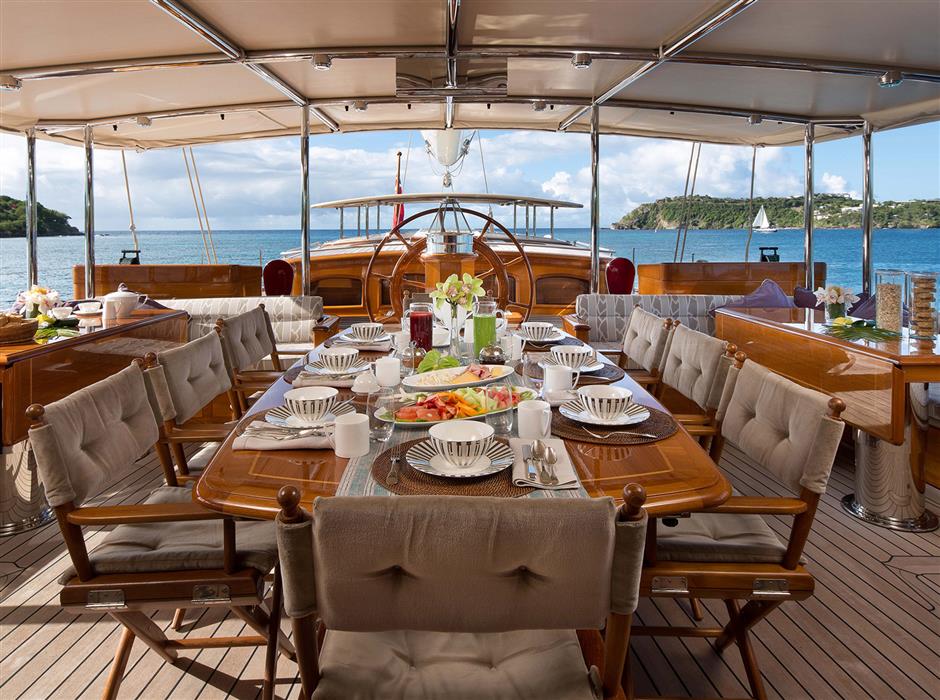 “No problem Madam, we can move you and your guests to the salon.” 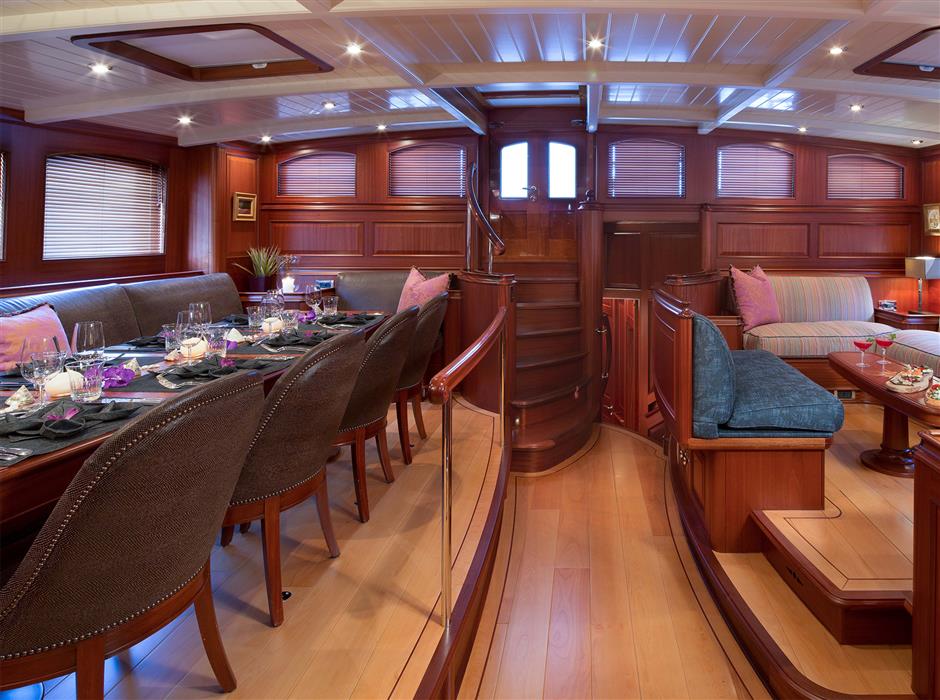 Under full canvas, she flies 10,000 feet of sail area.   Just look at the scale of her main boom.  It must be over 5′ wide.    Note that she was black when she was launched.  Now she’s white.   I am told that most mega-yachts are painted every four years.   Pandora, now grey, has been painted three times since she was launched in 2007.    Of course, one of those paint jobs was when she was fresh from the yard.  As an epoxy boat she does not have gelcoat. 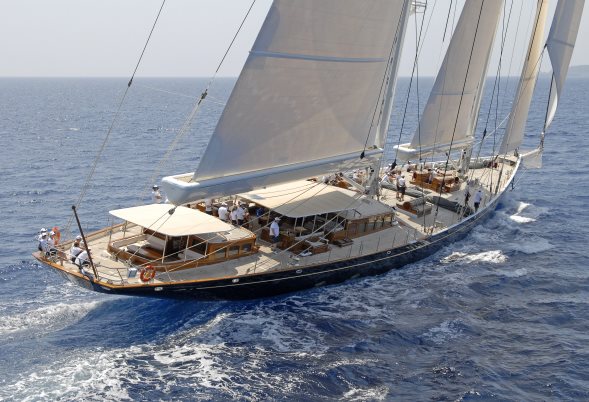 Athos has a huge sail plan and a spinnaker that alone is nearly 5,000 square feet.  That single sail has 5x more sail area than Pandora’s main and jib combined. 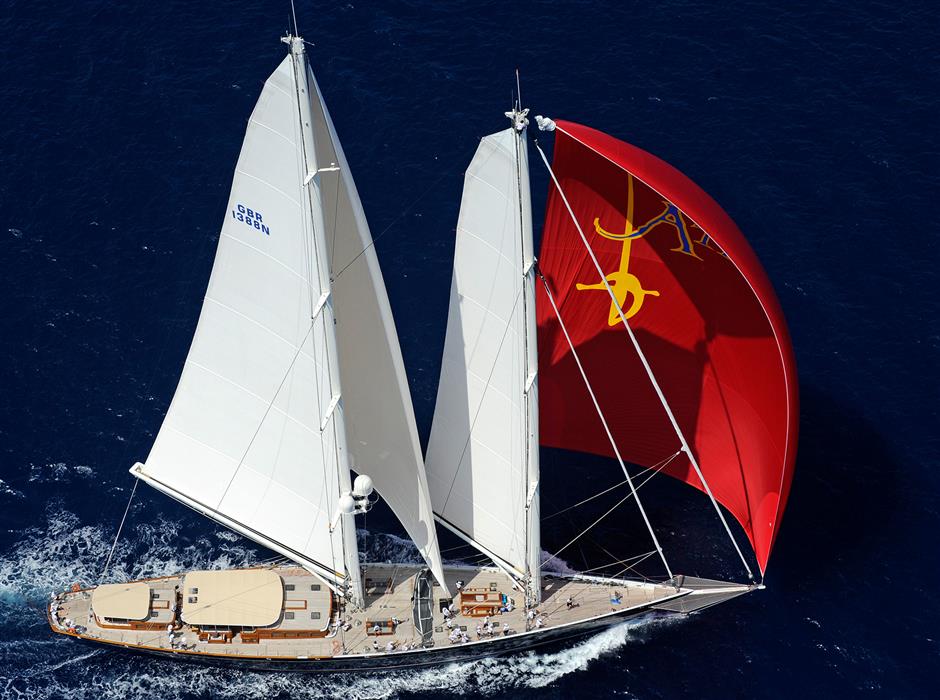 As Brenda and I make plans to run Pandora home ourselves, the owner of Athos doesn’t have to worry about those pesky details.   Nope, just hop on his private jet and fly away.  It’s up to the crew to move her to, well, wherever he says to go.

And Athos has gone to plenty of places, Greenland, the Caribbean, the Mediterranean and South Pacific.

Her owner, Geert Pepping, knows a bit about the ocean as he operates one of the largest fleets of refrigerated transport ships in the world.  There must be money in “fridging” as it seems he’s done pretty well for himself.

That’s good to hear as while Athos cost about $30,000,000 to build, that’s just the beginning as it costs at least an additional 10% of that in operating expenses every year.  The rule of thumb, I am told, is that you should not spend more than 10% of your net worth on a yacht.  While estimates put his net worth in excess of $100,000,00o, I’m guessing that the operative phrase must be “in excess of” as it surely takes plenty of coin to support such a magnificent vessel.

Athos is truly a spectacular machine and perhaps her owner is ready for something else as she is currently for sale.  And, for a cool $28,000,000 Euros, she can be yours.   Check out this link to learn more.

So that’s about if for now.  We have left Falmouth and will leave Antigua on Thursday to head for the USVIs.  And after a brief visit, on to the US, toward home.

Don’t forget to check in as we will be posting our position every four hours on the “where in the world is Pandora” button on this page.  And, as always, you can sign up to receive a notice when I post so you won’t miss even one scintillating rant ever again.

So, there you have it,  we’re on our way and all about Athos, the largest schooner in the world.