And so, the journey begins…

It’s almost time to for us to leave Antigua and we hope to begin moving north on Thursday, a few days from now.

The run home will be a long one.  First, two hundred miles to the United States Virgin Islands and the second leg from there to southern Florida and probably to Lake Worth, where we will make landfall and clear customs, a run of nearly 1,200 miles and about a week at sea.

After that, it remains to be seen if we will leave Pandora somewhere and drive home or if we will continue part or all of the remaining 1,200 miles north to CT.

I expect that the best option will be for us to leave Pandora somewhere in the southeast US for a few weeks and I’ll come back down with crew to bring her the rest of the way north.  The good news is that we have until July 15th to move Pandora north of Cape Hatteras, and out of the hurricane “box”.

A few weeks ago, when it became clear that the USVIs were, along with Antigua, the only two places left in the Caribbean where we could still make landfall legally, some cruisers, like us, headed to Antigua but many more rushed north to the USVIs, fearful that that they would be denied entry if they didn’t get there as soon as possible.

When we left St Lucia to begin our trip north, we too considered continuing on to the USVIs, after a short stop in Antigua, but after hearing that the USVIs were  becoming terribly overcrowded with so may cruisers, we decided to wait here in Antigua until the crowds thinned out.  I was fairly certain that the USVIs would remain open to US citizens for the duration and fortunately, at least as of today, I was correct.

So here we are, several weeks later, the crowds in the USVIs are thinning as cruisers begin to move north toward the US and we have heard that there are once again, moorings and reasonable places available to anchor available.

The Salty Dawg Homeward Bound Flotilla, now numbering nearly 180 boats, just added yet another departure date in the second half of May.  The first group that left a week ago Sunday is now arriving in Florida.   The second wave of boats left the USVIs yesterday, Sunday for what will likely be a week long run to southern Florida.

The goal of these flotillas is to provide support for any cruisers that wish to head to the US, many that will be making the run shorthanded.  Quite a few of the boats heading north are doing so as they are fearful that Trinidad and Grenada, where many cruisers store their boats for the summer, will remain closed to any additional seasonal arrivals.  Those islands are vital to cruisers as they are the only islands in the eastern Caribbean that are generally safe from hurricanes.

Many other cruisers, who do not want to make the run north to the US, are opting to leave their boats in Antigua and other islands that lie within the hurricane zone.  However, given the arrival soon of what is being forecasted as  especially active season, with more and stronger storms than normal, that may prove to be a very risky decision.  Only time will tell if any given island will be hit, but it’s not a chance that Brenda and I are willing to take.

There has been much discussion within in the cruising community about the flotilla and what the Salty Dawg Sailing Association is doing to support those trying to get back to the US.    Amazingly, the SDSA received enough exposure to catch the interest of the NY Times.  Although the article, published last Saturday, is more focused on the effect that the huge increase in cruising boats is having on the USVIs, it does touch on the good work that our group is doing to help cruisers during this difficult time.   If you’re curious about what the Times had to say, check it out here.

And speaking of difficult, it is hard to fathom how much things have changed in the last month and while there are signs that some areas are beginning to emerge from the initial onslaught of the virus, it is becoming clear that we have a very long way to go before we will be able to reach anything that resembles “normal”.

More and more, estimates suggest that we will not really see any meaningful relief for perhaps 18 months when there is hope that a vaccine will become available.   If that’s the case, there will not be much of a cruising season in the Caribbean next winter at all.

So, getting home becomes an even greater priority for us as the idea of leaving Pandora in the islands for perhaps two years, sounds like a terrible idea.

With some luck, we will only be here in Antigua for a few more days and then our journey begins.

Even though it feels like forever that we have been killing time here, waiting until we can head home, that didn’t keep me from being in awe of today’s spectacular sunrise.   For better or worse, I see the sunrise nearly every day as being aboard means “early to bed and early to rise”.  Last night we were in bed before 9:00.  Lights out… 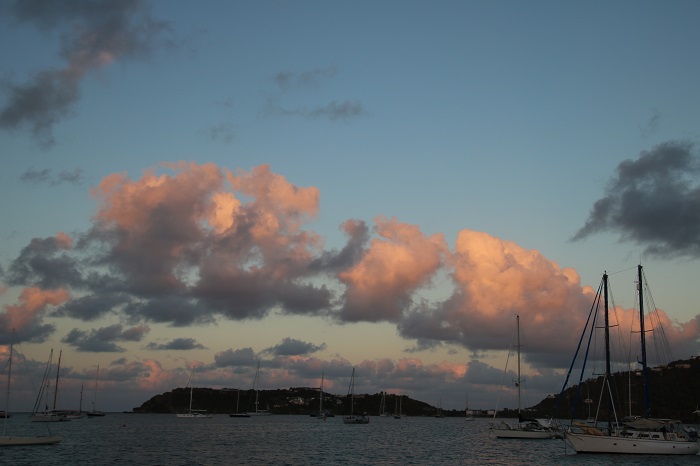 The sun came over the horizon in a fiery blaze. 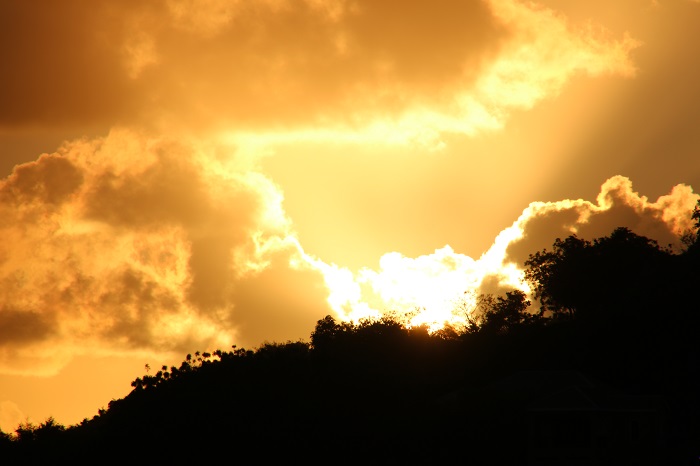 As I sat in the cockpit with a cup of coffee, I was struck by how peaceful the view in “our world” was in a world that is anything but… 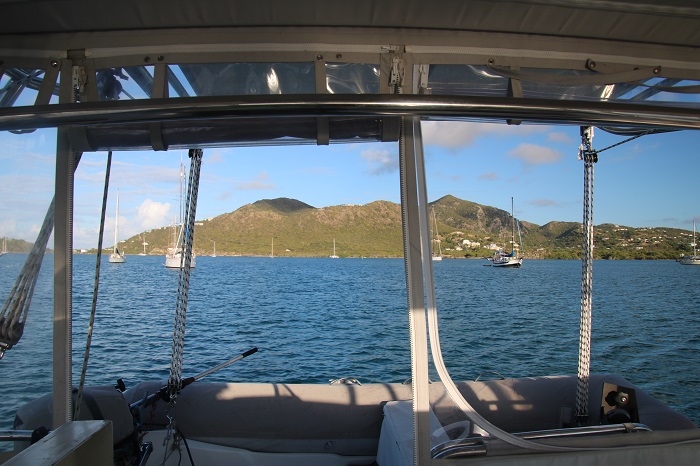 While every day begins with hope that things are heading closer to normal, those hopes always need to be tempered with yet another round of disclosures out of Washington from a president that seems Hell bent on sowing division. with his latest installment, calling for demonstrations against restrictions and closures that have been put in place in a number of states.  And that was only one day after he announced that those decisions and what is the best timeline, state by state, lies with those duly elected governors.  It’s hard to imagine how this is going to have a happy ending when there continues to be so much division and turmoil.

In spite of all the death and sadness, at least there are the beginnings of a better understanding of what needs to be done.  However, in spite of our best efforts, thousands more will likely become sick in the coming months, suggesting that the current “new normal” will be with us for some time now.  I read today that Singapore, a model for control of the virus, has seen a resurgence of cases as lock-down measures were lifted, not encouraging news at all.

For now, here in Antigua, a country with a very limited capacity to deal with a major outbreak, restrictions remain firmly in place with only the most limited movement allowed and only between 07:00 and noon.  As witness to how things have come to a nearly complete stop, this view of the parking lot at The Admiral’s Inn, which would normally be completely full, was sobering.  The Inn is a place where the Salty Dawg Rally has held so many events, it made me sad to see just how far we still have to go to get back to anything like normal. 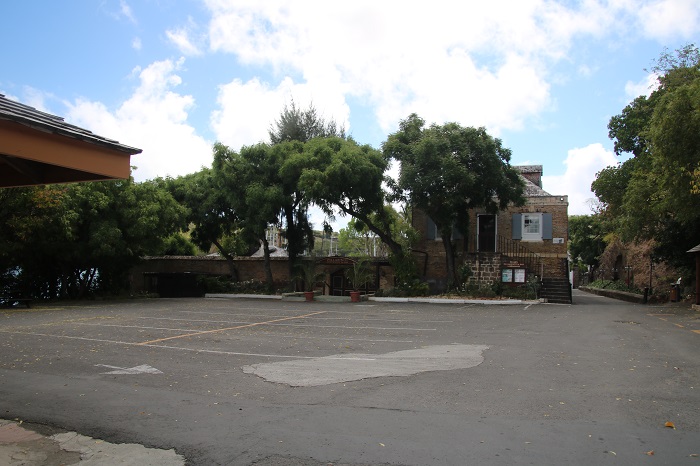 Should they stand by and wait for Trinidad and Grenada to open up again or just cut their losses and head back to the US.  It’s anyone’s guess about what will happen but to me the real question is what will next winter’s season look like.

Will we be back to “normal” with restaurants open and again have the freedom to mix socially, or will there still be restrictions and the now required social distancing still in place while the islands wait for the availability of an effective vaccine.

I for one, doubt that next winter season will end up being anything like “normal” so the idea of leaving Pandora down here for what might end up being be two years until the threat of the virus is contained, seems like a terrible idea to me.  I can only imagine what sort of condition she would be in after two years on the hard.

Having said that, I am doubtful that Pandora will see much use back in New England either with the summer sailing season almost upon us and it’s not looking good with restrictions galore and event after event being canceled.

In closing, I should mention that a sub-line for the Salty Dawg Flotilla is “cruising helping cruisers” and that is exactly what the group is all about.

As they say, “what goes around, comes around” and now it’s Brenda and I that are getting help, first as part of the flotilla as well as in other ways.  The outpouring of support has been wonderful with daily notes from friends asking how they can help us and wishing us well on our journey.

We have been invited to visit friends in their homes as we make our way north, eager to do whatever they can to help.  Making grocery runs, receiving packages and even the free use of a dock near Baltimore where we can keep Pandora until mid June if we decide to leave here there on our way home to CT.

Things are crazy in the world right now but in many ways beyond “cruiser helping cruisers” and all this is helping to bring many of us closer together.

So think of us as we begin our journey north and to home, a voyage that Brenda is not looking forward to in the least.

Today I gave Pandora’s bottom a last scrubbing before we begin to head north.  While we are in the USVIs I expect that I’ll do a bit of last minute touch-up to be sure that we can make the fastest passage possible passage on our way home.

In a few days we will pass through the mouth of Falmouth harbor as we continue our voyage home. 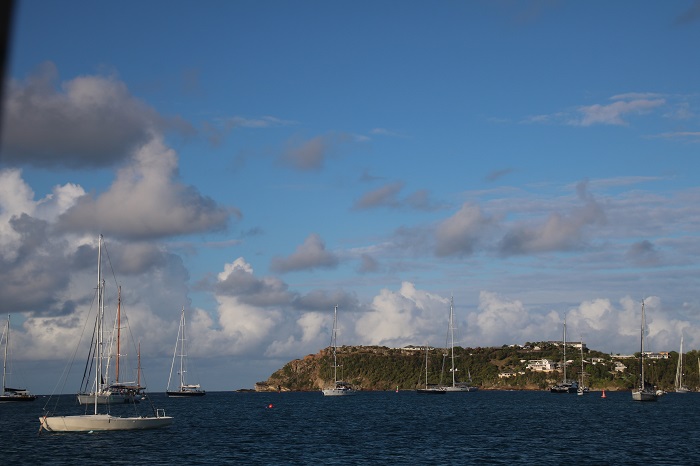 Fortunately, Pandora’s a pretty fast boat but any sailboat still moves at a glacial pace when you really just want to know, “when will we get there?

6 responses to “And so, the journey begins…”