>Allen Island ME and a glimpse of Betsy Wyeth

>It’s Friday afternoon and we just finished a 15+ mile, fairly sloppy with big seas of up to 6′ and not quite enough wind, sail from Booth Bay Harbor to Allen Island, the summer home of the Wyeth family.  That’s the Andrew and Betsy side of the family.  Just off shore from Port Clyde, the islands Allen and Brenner enclose a lovely thoroughfare complete with a few moorings.    While we have been coming here for many years, I am still in awe of how beautiful this place is.  While there are many impressive places in Maine, or elsewhere for that matter, it’s rare to see as refined a display of what can be accomplished when you have both money and taste.

To see the many buildings that make up the “village” that is the Wyeth compound, it’s very clear that every detail was planned out by someone with an acute sense of what they were trying to accomplish.   The look of the place is totally Maine, and like a living Wyeth painting. Speaking of Andrew Wyeth and his work, check out the “official site”.  Very nice.

I had a nice talk with one of the caretakers, just to be sure that it was OK for me to be using one of their moorings, and he confirmed that the nice lady in the white slacks is Betsy herself.  He said that she enjoys watching the sailboats as they ride on her mooring.  That makes me happy.  On our last visit, Brenda was thilled to share waves with Betsy.  Today she was pretty sure that Betsy and her companion were watching her knit aboard Pandora.   That sounds about right to me. 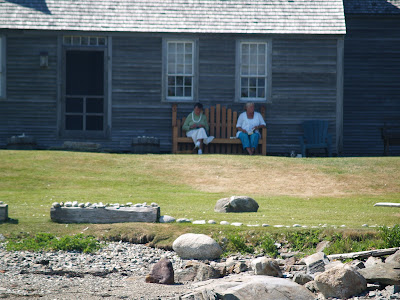 I was told that there are some 100 sheep on Allen Island, I tried, in a very subtle way of course, to get a tour of the barn.  However, in the very nicest way, that the Wyeth’s appreciate it if there is no landing on shore.  That makes sense to me.

We are visiting here with our friends Miles and Loreen who live aboard their Aerodyne 47 yacht Ariel for about 10 months a year. They do the whole snow bird thing, with summers in Maine and winters in the Bahamas.  They have not been her before and are as thrilled with the place as we are.   Ariel is a spectacular cruising boat and while she is only four feet longer, the difference is just amazing.  Much larger and far more elaborate, Ariel is in a class that is so much more substantial than Pandora that it’s hard to believe that they are so close in length.  Built of composite materials,  Ariel doesn’t weigh a lot more than Pandora but is probably twice as large.  It’s safe to say that you could purchase two plus Pandora’s for the cost of an Aerodyne 47.   She was designed with a lot of go fast features including an interior built by a company that does private jet aircraft interiors.  They are super light and quite luxurious.  Their granite counter tops look solid but are actually very thin and laminated to a honeycomb structure.

Ariel is about the only boat that I have seen since purchasing Pandora that I could honestly say, I’d rather own.  What a boat.  Or should I say, what a yacht.  Actually, according to Miles, the definition of a yacht is “any boat that’s bigger than yours”.   I’ll buy that and that would make Ariel a yacht for sure.

For the artist that has everything, how about a Mini Cooper on your island.  And, it’s red, of course.  It’s a fairly small island and a small car to match.  I wonder if the dealer makes island calls to fix what breaks. 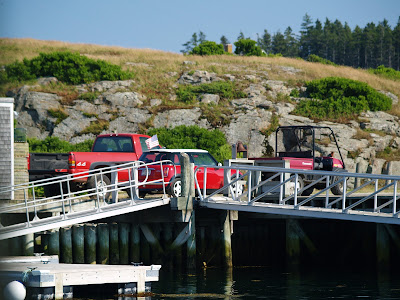 Everywhere you look, the view is wonderful, and tasteful, including a dory as art. 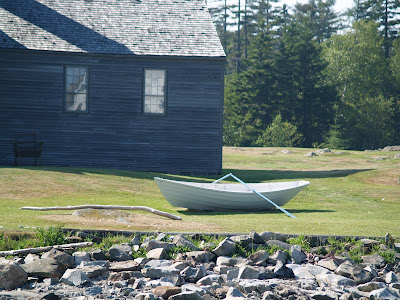 The view does look a lot like a Wyeth painting, doesn’t it? 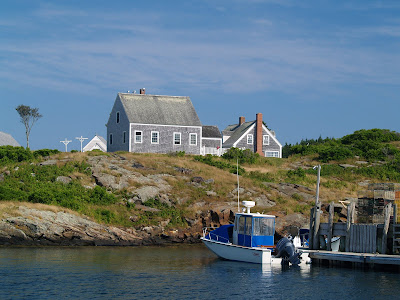 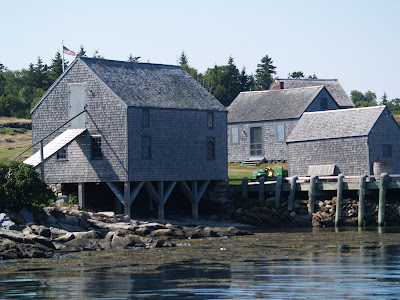 And, of course, a shot from the cockpit to prove that we were there. 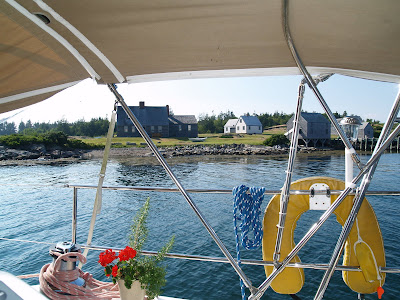 Not to forget that Brenda is knitting her way through Maine.   Actually, this shot is going to be entered into a contest to compete for “the most interesting place I have knitted” that is sponsored by the company that made her needles.  I guess that they are very fancy needles.  We won’t talk about my kneeling on one of them the today.  I think that I was able to straightened it out, more or less. 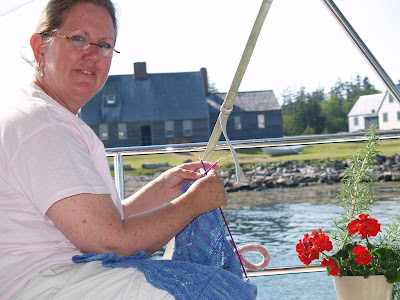 Well, have to get ready for dinner aboard Ariel.  It’s a hard way to spend Friday, I know, but someone has to  go over and help them drink their wine.
This entry was posted in Uncategorized. Bookmark the permalink.