Somebody turned off the Caribbean

Last night Brenda and I headed ashore to pick up the last takeout pizza available in Antigua.  Perhaps it wasn’t the last but it sure felt like that.   I say last because as of midnight last night, all non-essential businesses on the island are closed for at least a week and a 24 hour quarantine is in effect.

Along with every other island in the Caribbean, Antigua has effectively been turned off.

Realizing that our freedom, such as it is, was down to the final hours, a number of our nearby cruising friends decided to get together for one last visit before the new rules went into affect, rafting four dinks together off of one of our boats.

Our thought was that by rafting dinks out in the breeze and not climbing into anyone’s cockpit, we’d be being responsible and still have the opportunity to do some socializing.  I expect that it is going to be a while until we are able to enjoy such social activities again.  Open air or not, Brenda and I were careful to place our dink upwind from the group.

And, speaking of social distancing,  I wonder what a proper caption for this photo might be.  “Tony, for God’s sake, I REALLY need some space.   Go to your dink.” 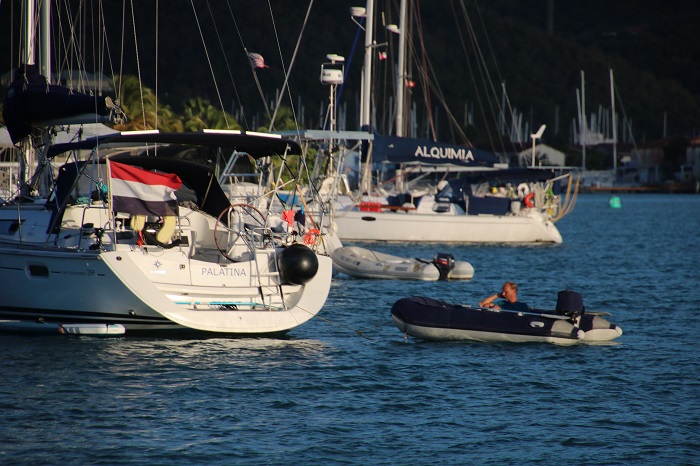 And, speaking of confinement, I would not be surprised if the ban is renewed for yet another week as I am not sure what will be accomplished after only a single week given the history of infections spreading elsewhere in the world.   The good news is that only a handful of infections have been identified on the island and I understand that they were from passengers on flights from the UK and were discovered promptly.  Let’s hope that they have been contained.

I only wish that the US was so diligent about locking things down.   The patchwork approach, state by state, does not give me a lot of hope that things will be anything but catastrophic.

It is unnervingly quiet in the harbor today and in spite of dozens of boats anchored here, there has been none of the usual buzz of small outboards speeding around the harbor. 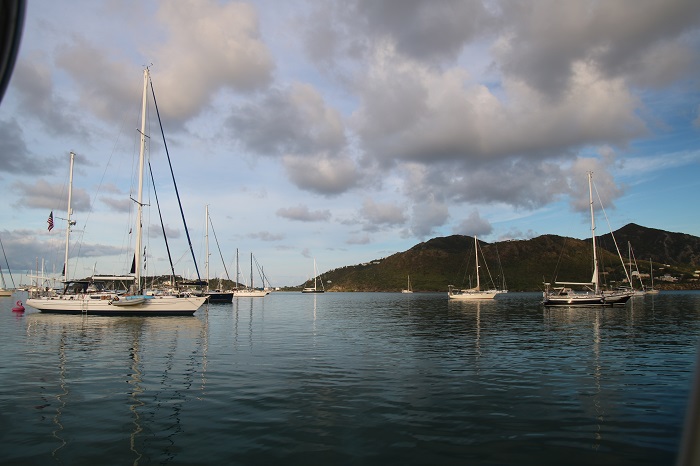 While a lot of the big kids have left for the season, there’s still plenty of hardware in the two mega-yacht marinas. 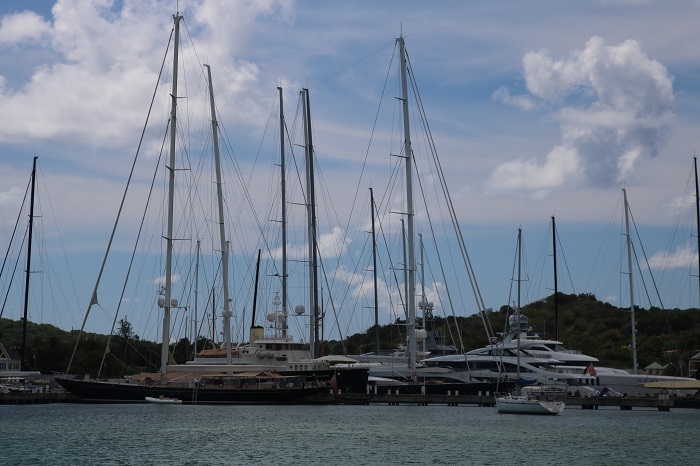 Everyone has been ordered to stay at home on the island and all cruisers are confined to their boats.  Even cruising around the harbor in a dink is prohibited.  And, if you wish to move to a different harbor permission you must be specifically granted approval to move by the Antigua Coastguard.

The island-wide lock down was announced two days ago from the office of the Prime Minister to give everyone time to adjust and prepare for the new rules.

The day before the announcement, Brenda and I made our last trip to get groceries, which I wrote about in a prior post, and while that experience was unnerving enough, it was only a dress rehearsal for what happened at the same grocery the day that the shutdown was announced.

By the next morning there was a line of some 200 shoppers waiting outside the market in Jolly Harbor when it opened, mostly locals, and there seemed to be little concern for any sort of social distancing, with everyone crammed close to each other while waiting to be allowed to enter the store.  Scary stuff.

A local friend told me today that the lock down was announced because nobody seemed to be taking the threat seriously on their own.

Yesterday we moved from Jolly Harbor, to where we are now, Falmouth, knowing that it was “now or never” if we wanted to change our location.  We did this for a number of reasons, not the least of which was that we could not run our water maker in Jolly as the water there has a very fine silt that clogs the filters in short order.

Another reason is that Jolly Harbor is much more exposed to waves and the forecast calls for a north swell to come into the harbor, beginning in a few days, which would make it very uncomfortable.  And, lastly, I was a bit put off during the morning VHF cruisers net yesterday, listening to cruisers lecturing other cruisers for not adhering to the restrictions in quite the right way.   In particular, one complaint was that some cruisers were touring the harbor, stopping to talk to friends while standing alongside.  Ok I get it but it’s hard to imagine infecting someone from 6 feet away with a 10kt breeze blowing between you.

So we headed off to Falmouth, a really nice harbor.  So nice in fact, that the British used it as their primary commercial port for over 100 years when the Navy was in control of nearby English Harbor.    Fortunately, we were able to take advantage of the light winds and the final day before all boats are to be locked down to make our way here.  Our plan, subject to change, is to remain here until we have a clear plan for making our way north to the US.

One of the things that I most enjoy doing when visiting Falmouth, pre-lock-down has been to tour the harbor (and I took these photos yesterday, before the restrictions were in place) and look at all the great yachts.  Antigua is often referred to as the Sailing Capital of the Caribbean and is surely THE place for huge sailing yachts to hang out for the winter.  And while a lot of them have already left to head back to Europe, the harbor is still packed with all manner enormous yachts.

So, in a time with so much bad news, I enjoyed touring and photographing a few of these beauties.  Here goes…

A yacht that I  have admired for a number of years now is Meteor, docked for much of the season here in Falmouth.  Launched in in the Netherlands in 2007, she is a thoroughly modern classic.   This photo of her doesn’t begin to do her justice. 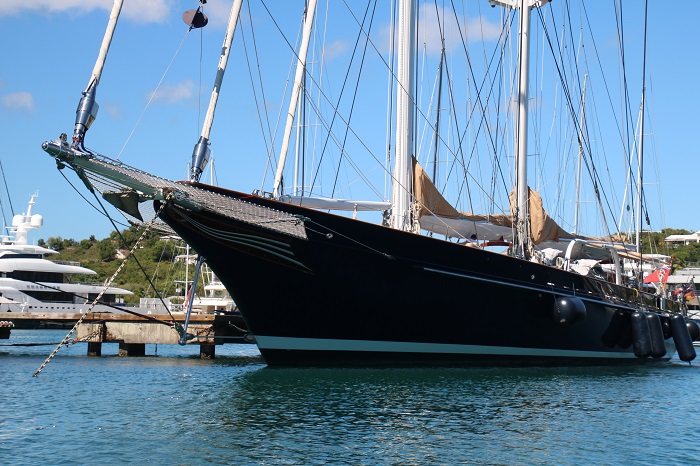 This short video shows how amazing she is.  And you would expect amazing for $30,000,000. Brenda would happily shelter here in their salon.  There’s even room for a small loom.   However, I expect that the crew would freak out when she began scattering bits of yarn and fuzz around her on that beautiful white carpet. 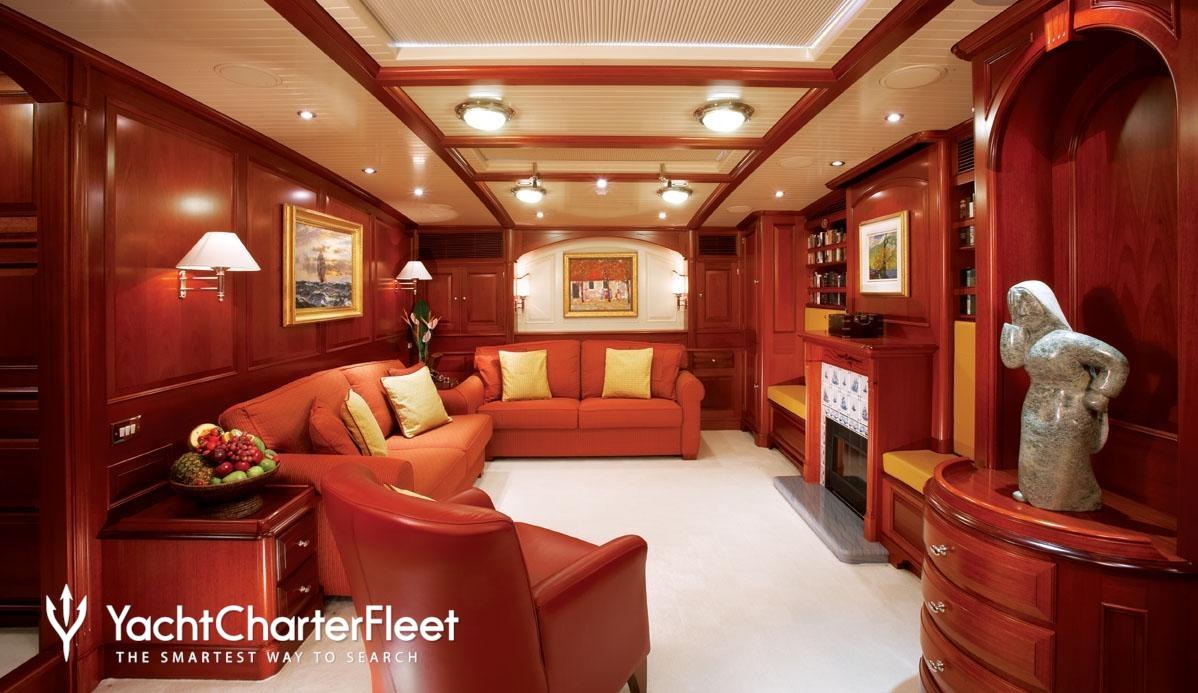 Indeed, a proper place for a nap.  And we all know that Brenda loves a good nap. 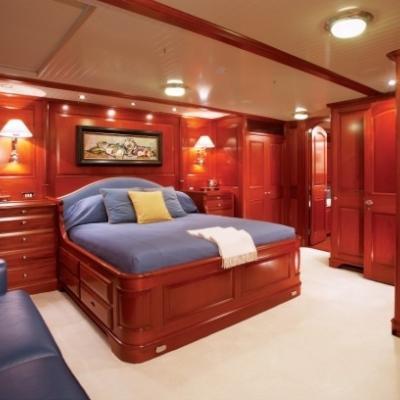 Still want to see more about Meteor?  Follow this link.  You can even charter her.  How much?  As was once said, “if you have to ask, you can’t afford her”.   I remember racing against her in Newport a few years ago when we were invited aboard Marie for a few days of racing.   I wrote about that magical experience in this post.

Another yacht that I have long admired is Bystander, launched in 2007.  She is the “tender” to the Classic J yacht Velsheda, launched in 1933.   Bystander was designed to look the part of a proper 30s yacht.   She is a regular here in Falmouth. 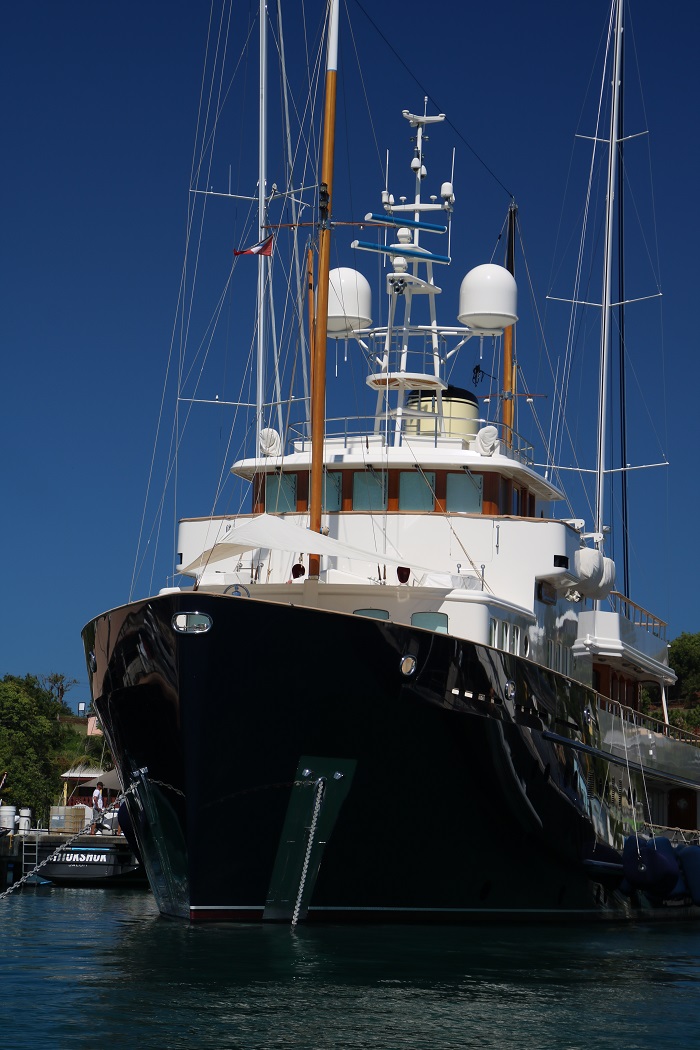 Beautiful from any angle. 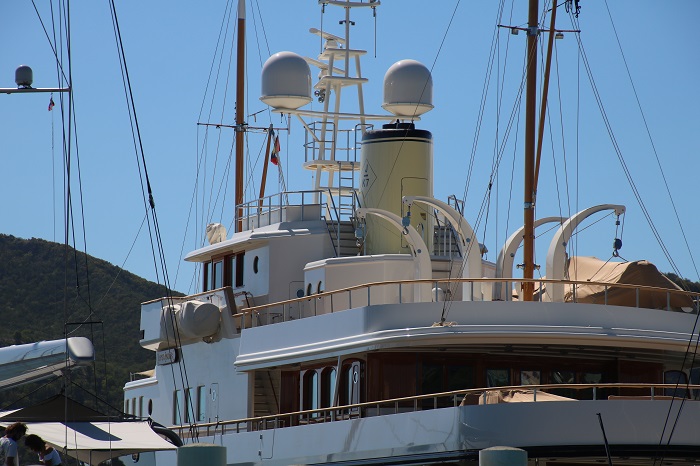 Brenda would love the galley. 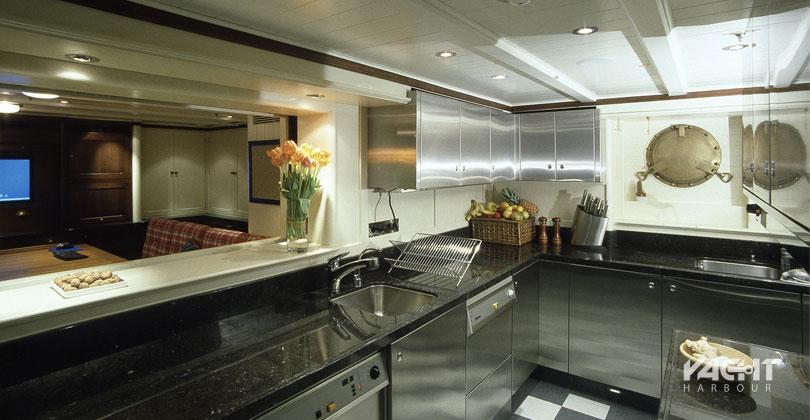 And, if the chef chased here out, the engine room is clean enough to eat in.  An awkward segue I’ll admit but I wanted to use the photo. 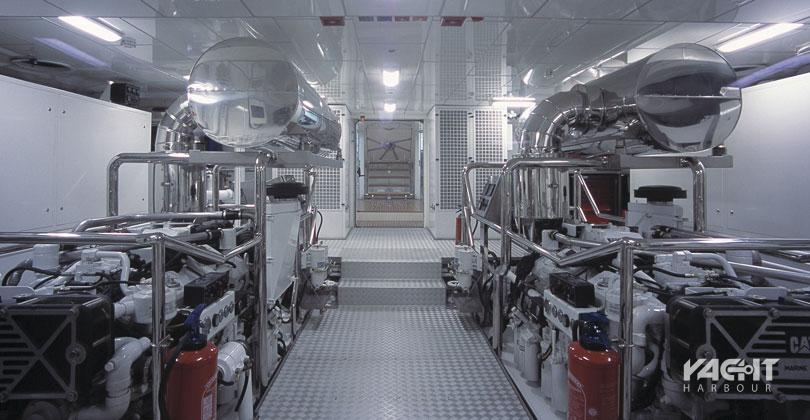 Of course, she was designed to shadow the owner’s sailboat, Velsheda, launched in 1933, one of the iconic classic Js.   I am sure that she is in the harbor but I don’t have any photos of my own to post.   There’s more information at her site if you’re interested.   Imagine what it costs to keep a yacht of this scale and age, nearly 100 years old, in perfect condition. 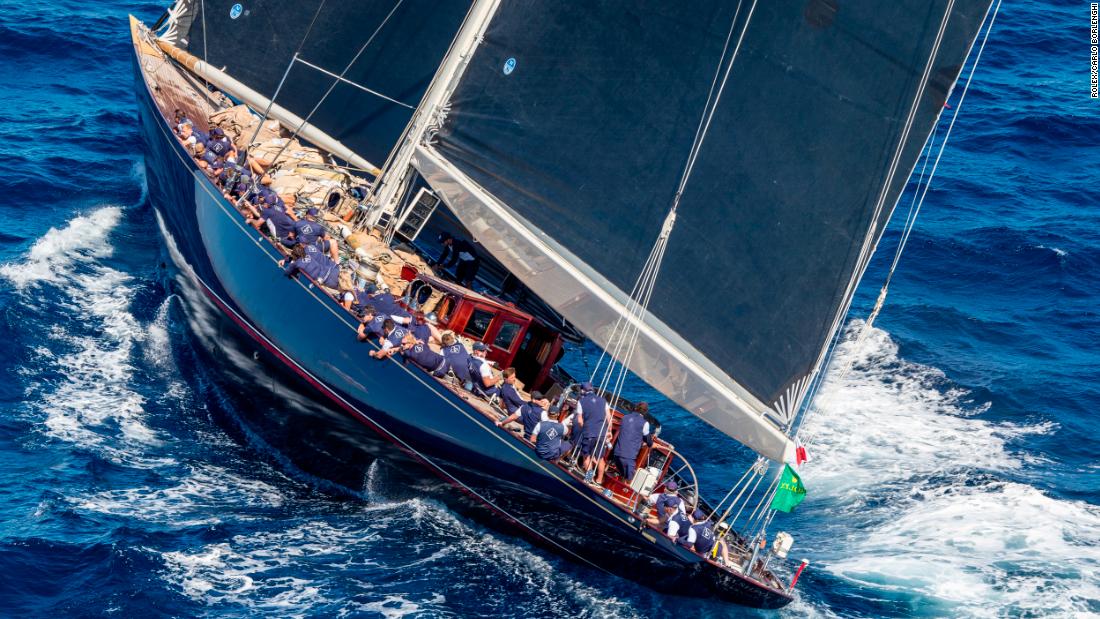 Bystander is described as an “escort vessel” offering the comforts that perhaps Velsheda doesn’t have.  Sure, if you say so.  To me, it seems a stretch to imagine that her amenities are anything but luxurious.

I have mentioned in past posts that a new trend among the uber-wealthy yachting set is to have “shadow vessels” to carry all their toys so they can avoid cluttering up the “mother ship” with all manner of stuff.   I have posted about Garcon, a shadow yacht that’s been here in Antigua for several months now.  Her name, I imagine, grows out of Garcon as in “Garcon, please fetch me another mint julep”. 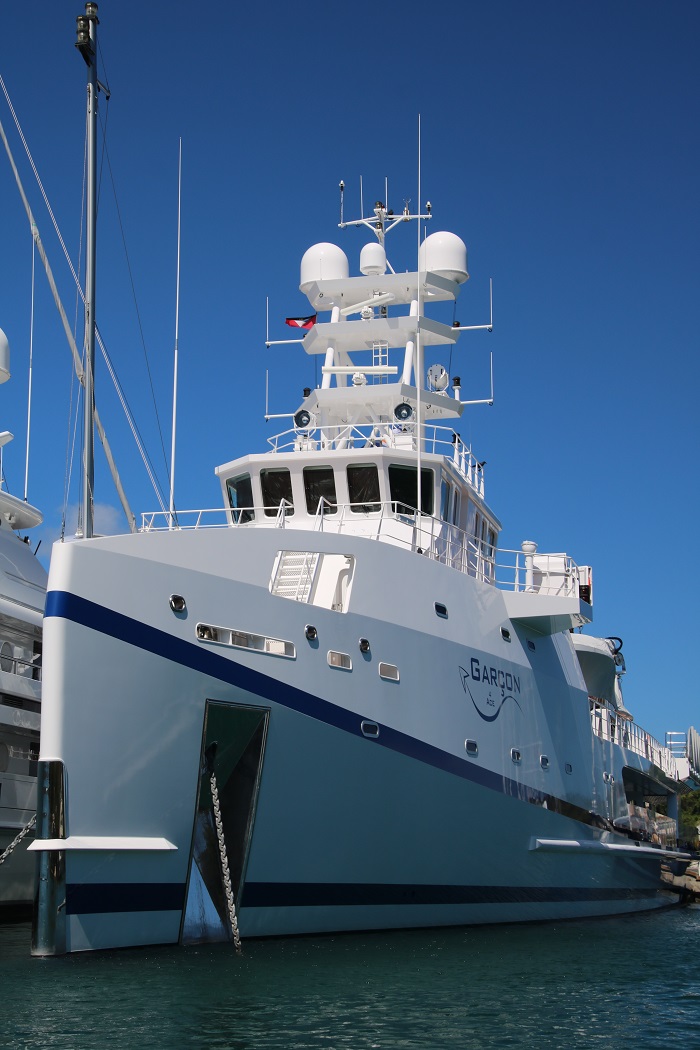 It appears that they were getting everything ready to head out yesterday, the chopper all set and covered for being at sea. 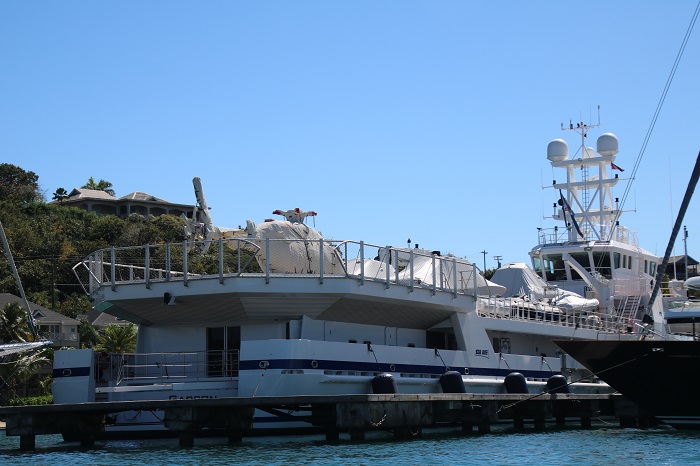 Not certain, but Alpha Nero at 270′ long, featuring 4,000 square feet of living space, seems like the only yacht in the marina big enough to have or need a shadow yacht.  She features a large pool on the aft deck that can be converted to a landing pad for the chopper, by virtue of a hydraulically lifting bottom.   “Garcon, please fetch my chopper from Garcon”.

She is owned, you guessed it, by a Russian, Andrey Guryev, who made his fortune in phosphate. 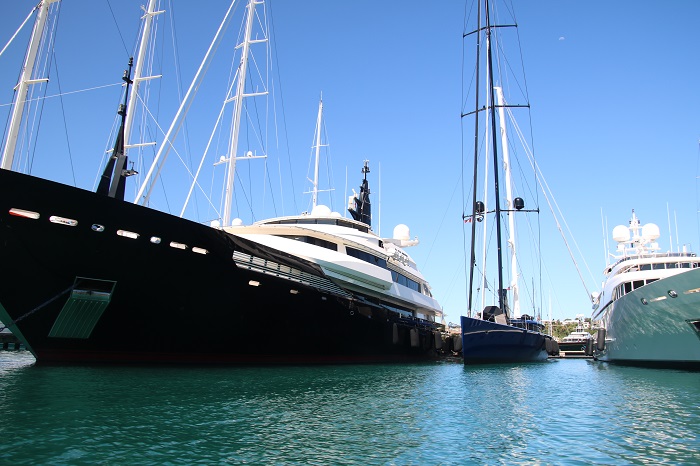 So, this morning, off went the “mother ship”.  Garcon isn’t here now so I guess she left earlier and I missed her departure.   Interestingly, when a large yacht leaves the harbor for the season her horn is blown loudly and the remaining yachts salute her in kind.  In the silence of this morning, the salutes were particularly obvious. 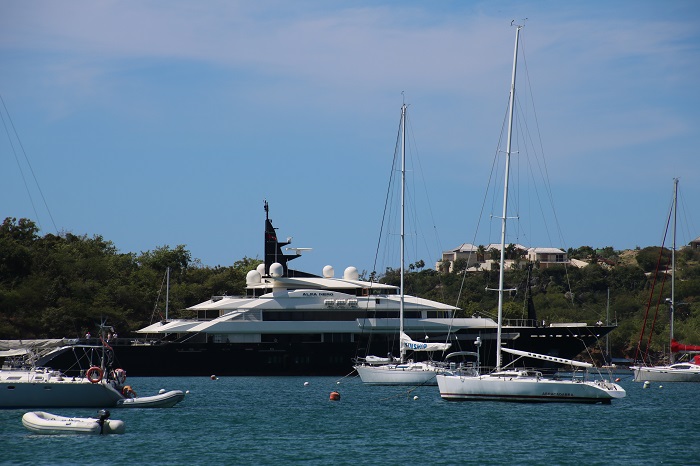 It’s hard to really appreciate the scale of these yachts, lined up in a row. 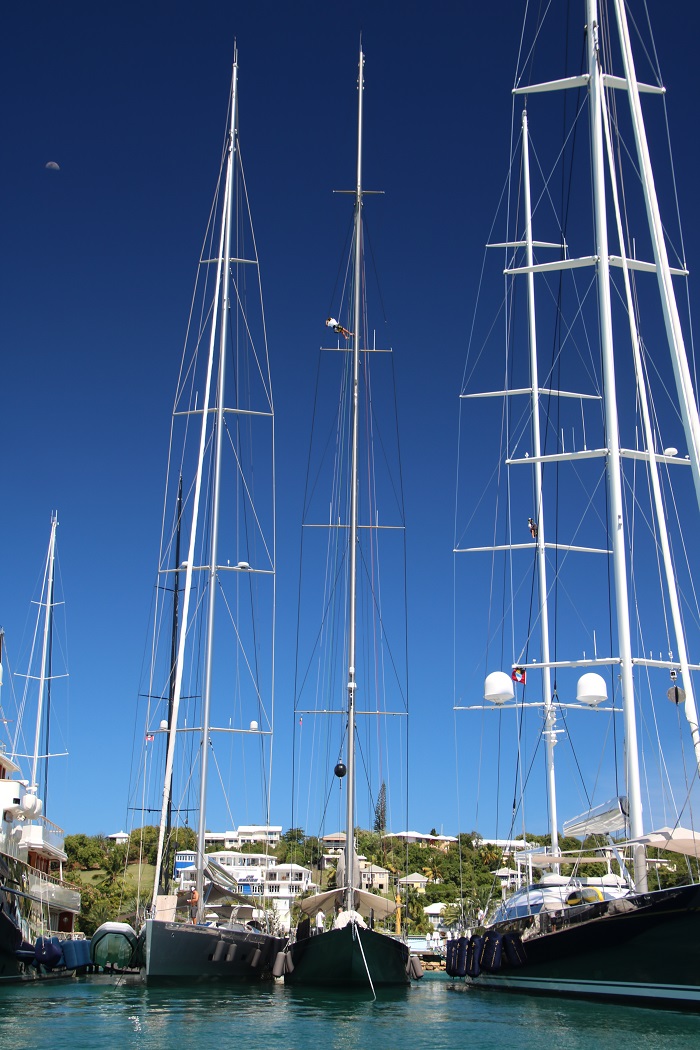 Except when you realize that the “little one” in the middle has someone high up surveying the rigging. 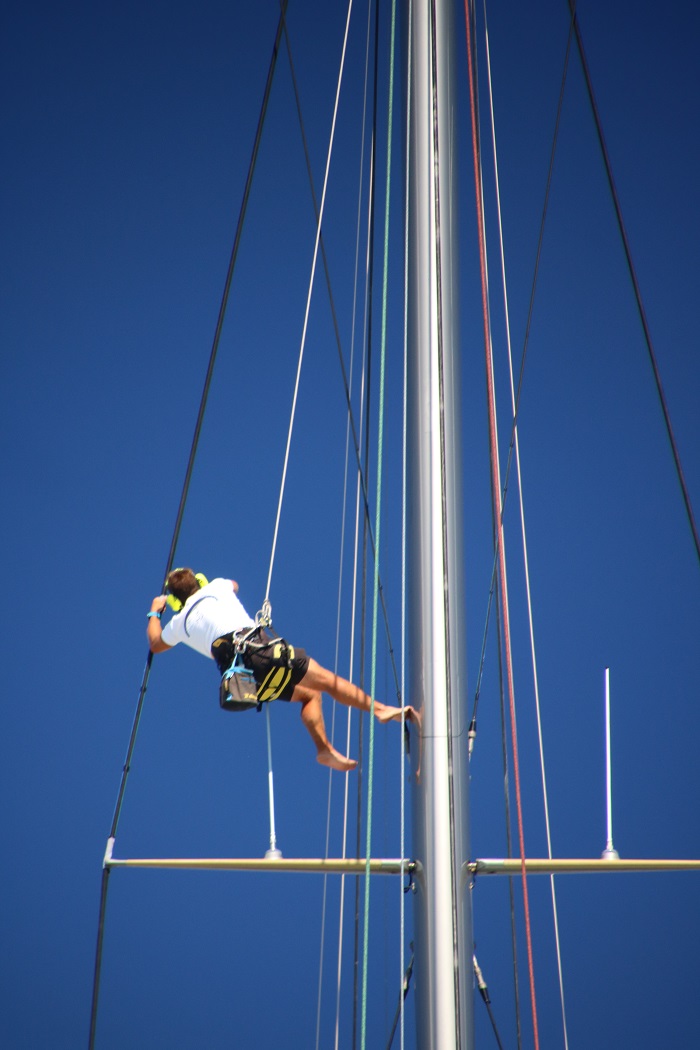 And, “amazing” doesn’t just apply to the huge yachts.   This boat says “fast” even tied to a mooring.   Shockwave has a vinyl “wrap” and yes, it really is that shiny, even up close.   She’s fully carbon and as is the case for so many performance multihulls, was built in France.  Check her site out to learn more. 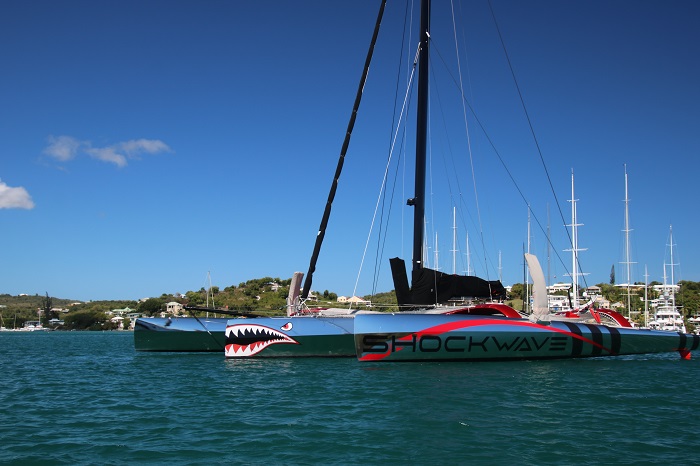 If you, like me, are curious about how you’d go about wraping a complex shape like Shockwave in chrome, check out this video.  And, I can tell you, that it looks perfect, even up close.  No “ten foot view” required.And, Shockwave isn’t the only speeder in the harbor.   Meet UltiMotion. 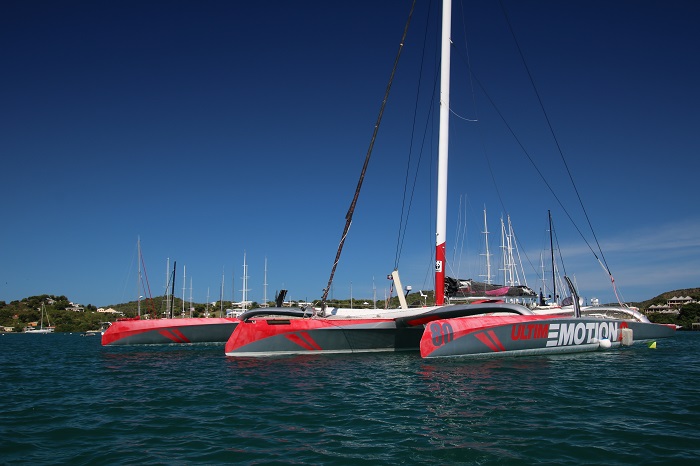 This is one high-tech machine.   I have to wonder how much the windscreen on the right really helps when the going gets rough. 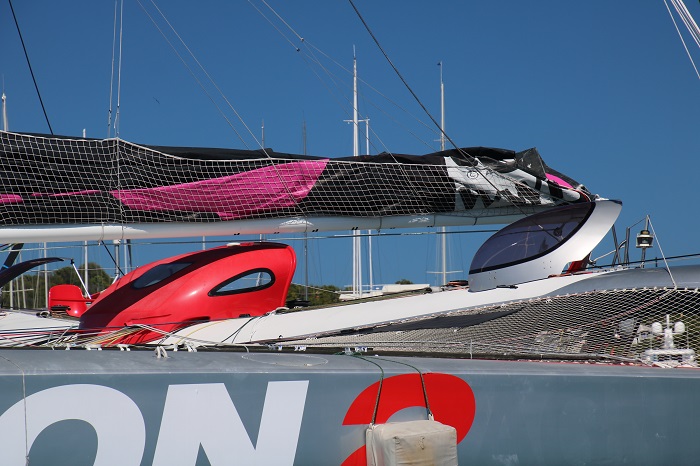 Imagine the loads on the main cross beam when she’s blasting along at 30+ kts.  She’s all carbon, I am sure and as I understand it, carbon doesn’t give a lot of warning when it’s going to break, it just explodes into a shower of splinters. 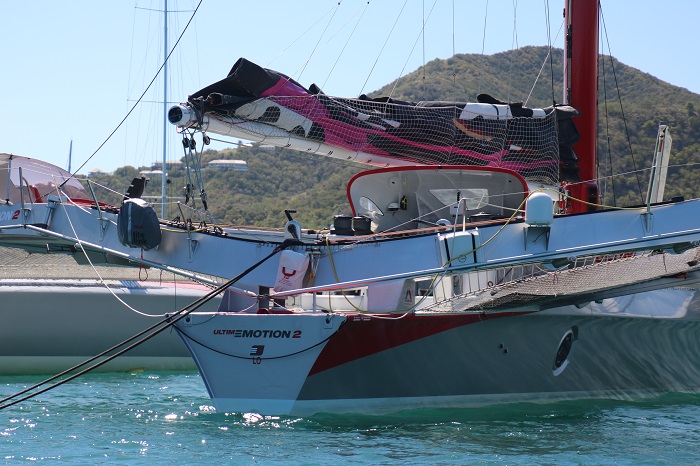 So, here we are, hanging out in Antigua waiting for well, waiting to see what happens next.  Good thing that the hurricane season is still two months out.

That’s the good news.  The bad news is that today the National Hurricane Center announced that they expect this year’s storms to be “above normal” with four powerful storms.

All the more reason to be sure and get Pandora home.  However, we aren’t in a big hurry.  Our son Chris is adamant that we not come back too soon.   And, as much as his mother doesn’t want to make the 1,000 mile run to Florida, he REALLY doesn’t want her on an airplane ride.  His advice, “Mom, this is a once in a hundred years thing so 1,00o miles aboard Pandora really isn’t all that big a deal when you think of it that way.”  Not sure Brenda buys that logic.

So, there you have it, we are in Antigua and somebody just closed the Caribbean.

When will the door open so we can go home?  I have no idea.

3 responses to “Somebody turned off the Caribbean”