We were leaving until we weren’t

Never mind checking out of St Lucia yesterday!  We decided to stay a little longer.

This isn’t the view that I expected to wake up to today.  Pleasant enough but it’s still the marina. 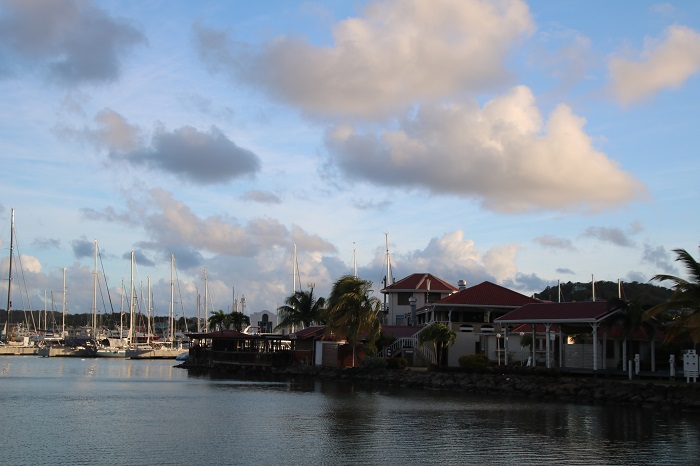 And we are still here.  That’s what Brenda and I decided yesterday about our plan to head north from Rodney Bay to the USVIs to hook up with the Salty Dawg Homeward Bound flotilla to the US.

All along I have been focused on making the run north as comfortable as possible for Brenda because she just isn’t an “offshore kind of girl” and given her tendency to get seasick, we are careful to choose our weather carefully.

So, we agreed that we would not make a final decision yesterday until we took a look at Chris Parker’s daily weather forecast and to call him directly to get his take on things.

After speaking to him it did look like the weather would be good with moderate close reaching conditions for much of the trip, heading into NE winds.  However, he was forecasting a pretty big north swell of 8′ that we’d be going into for the second half of the trip, something that would make for a pretty salty ending to the run.

After digesting that bit of news, and knowing that we really aren’t in a rush, I asked about perhaps waiting for the next window.  Chris’s answer, “sure, but who knows.  However, if you have time, there will be another window”.

Staying put turned out to be a good idea as of today the USVIs are now closed to all entries, US citizens or not.  We’d be able to anchor in the harbor but there would be no way to get ashore, even to register for quarantine.

At the same time I have been checking with my contacts in Antigua and learned that as of this morning that they actually extending clearance hours, now 7 days a week, 08:00 to 20:00.  Of course, you have to be checked for symptoms and may be subject to quarantine.  However, it looks like they will remain open, at least for now.  Additionally, while those who have expressed interest in the Salty Dawg flotilla to the US are scattered just about everywhere from Grenada to the DR, a good number of them are congregating in Antigua so we are now recommending that Antigua is the better option.

It’s pretty lucky that we decided to stand down for a day or we’d be in the same predicament that a fellow cruiser Merlin is, who will be arriving in the USVIs in a day or so and will learn the bad news.  They won’t be happy at all and probably won’t learn about the restrictions until they get there as they have only limited shore side communications on board.

So, yet another plan, for the moment.

Most of the businesses in the marina here are now closed so the place is mostly vacant.  I ran into a uniformed customs agent again today who told me that there was no way to clear out and that we should “just go”.   I couldn’t believe it. “Can’t you just give us some paperwork to prove where we came from?”  His answer, “no, just leave”.

The problem with “just leaving” is that there is tremendous sensitivity in most Caribbean islands regarding where you have been and when and there are a number of islands, particularly Martinique and Guadalupe that have more infections than others.   So, for us to leave and just show up somewhere, unable to prove where and when we left another island, could lead to being expelled and not allowed to check in at all.

To that point, I learned that the skipper on one of the boats that did the Salty Dawg Rally to Antigua last fall fell ill with the virus in St Martin and wasn’t able to get himself ashore without help.   He ended up being airlifted to Guadalupe where he is undergoing treatment.   Very scary.

So now, it looks like the best place for me and Brenda to head to is Antigua.  And I have to wonder how we will be received without clearance papers.  At least I hope to have the invoice from the marina stating when we checked out.   Antigua is particularly strict about clearance papers, even during normal times and these times are anything but normal.

The US, unlike all of the Caribbean islands, does not issue check-out papers which are required when you check into Antigua.  So, an exception is made by US customs  for those in the Salty Dawg Rally that are heading to Antigua .  They make a special point of issuing clearance papers through their office in Norfolk VA, which makes it a lot simpler to check into Antigua when we arrive.

I had also arranged for a diver to clean Pandora’s bottom yesterday, something that I normally do myself, because I thought that it was prudent to avoid an hour or more in the water, out in the bay, before beginning a long run.  However, with the change of plans, I canceled that, for now.

So now, with the USVIs closed completely I guess that Antigua’s the best option and I am making calls to some folks in the government that I know there to learn more.

Another unsettling development is that the Bahamas have issued new even more stringent guidelines.  All residents are now subject to a 24 hour curfew and boats already in Bahamas waters had to stay where they are, no movement at all.  Worse of all, no new boats are allowed to arrive and any boats caught transiting their waters would be heavily fined.

Hearing this was quite a blow to our plans as crossing the Bahamas was the preferred option for us as it cuts out a lot of miles to the US.

There seems to be a great deal of interest in the Salty Dawg Homeward Bound flotilla and in the very few days since we announced the plan, nearly 60 boats have expressed interest, many have begun signing up and more will surely do so each day.

The simple fact is that with such stringent quarantine plans in the islands, I expect that we are a lot safer here than the US but being in what was a bustling harbor a week ago is eerie.

Tables and chairs stacked and all businesses in the marina now closed. 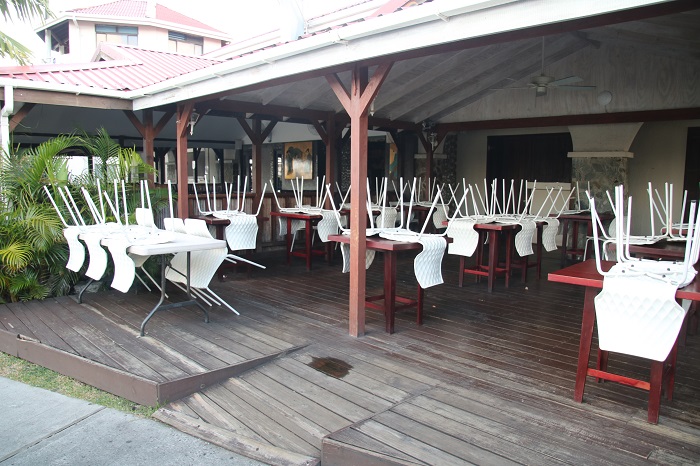 You could shoot off the proverbial cannon here and not hit anyone. 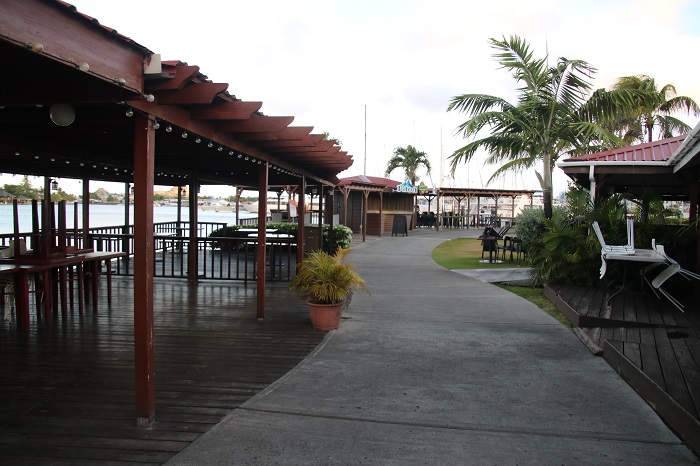 A week ago, this place was packed. 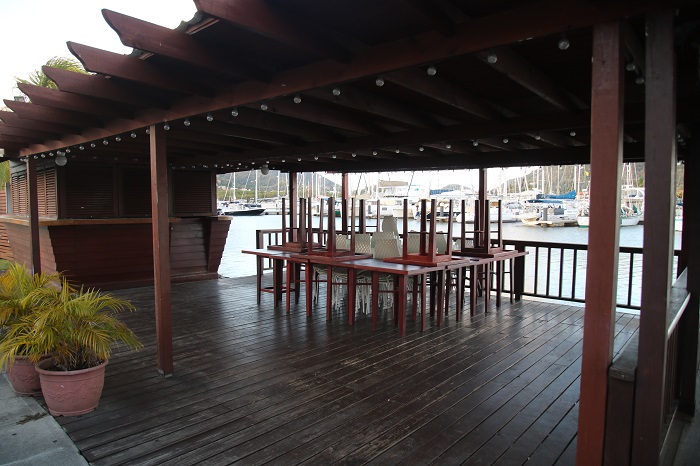 A lone kitty making the rounds. 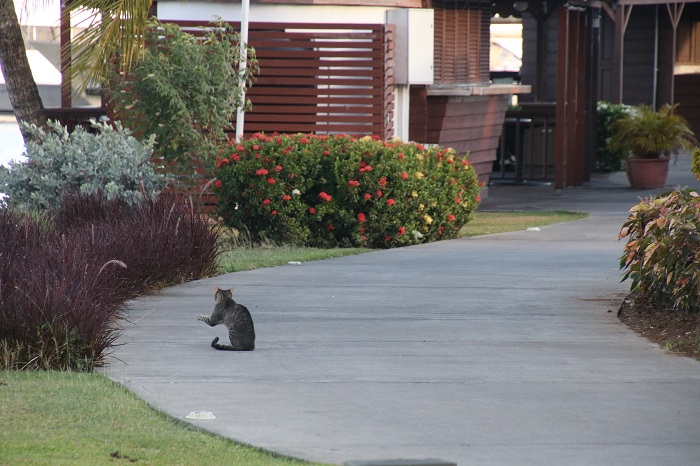 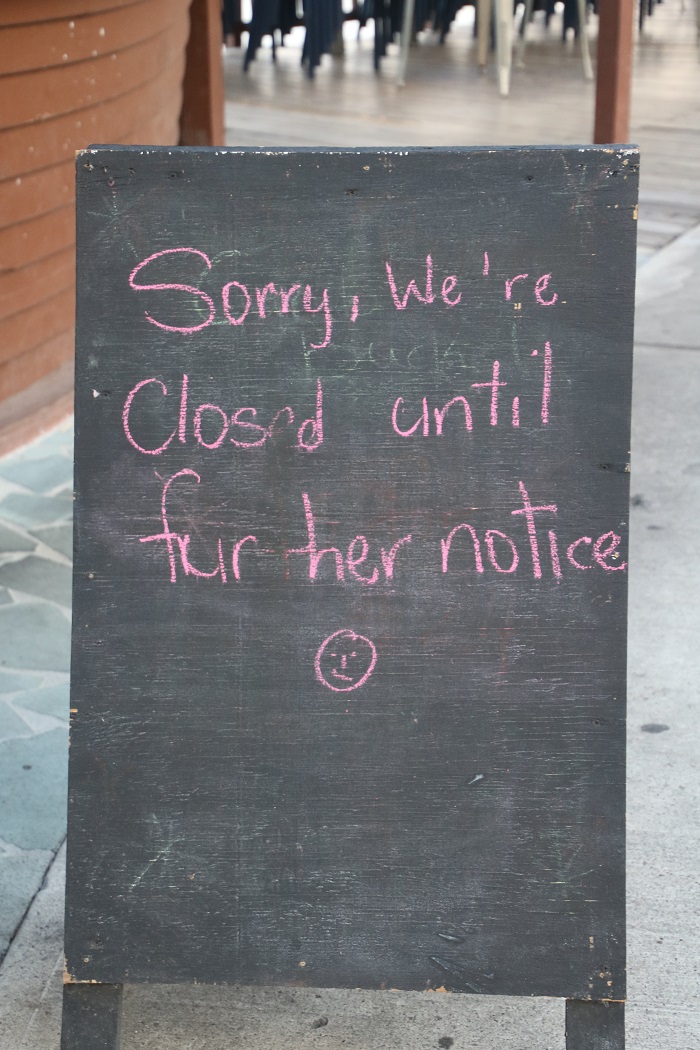 So, here we sit, probably safe from infection given the fact that just about everyone is gone so “social distancing” is not a problem.

Again, as I said yesterday, the difference in how things are unfolding here in the islands, with strict rules about who can come and go, compared to the US where Trump just suggested that he expected that things would be open again within weeks even though new infections are increasing hugely every day.  Unfortunately, most experts feel that is a terrible idea.

And remember that malaria drug that Trump was pushing?  The FDA has determined that there is no evidence that the drug is any better than “established therapy”.   I guess it’s time to call off that run on the drug that his comments unleashed.

As long as the fight against this virus is focused more on “instinct” and less on science and decisions on how to fight the acceleration of new cases is left to a patchwork of states and municipalities, everyone is at a huge risk of things really spinning out of control.

Heck, even Prince Charles has tested positive.  Who’s next?  The Queen?

So, there you have it, we were leaving and now we’re not.

Details to come is all I can say.

5 responses to “We were leaving until we weren’t”