It’s a Zombie Apocalypse and we are on a boat.

As everyone knows, during a Zombie Apocalypse, the best place to be is on a boat.  Not only are you isolated from just about everyone but Zombies can not swim.

However, not to spread “fake news”, but the apocalypse we are facing is the Caronavirus and an administration struggling with the question of what to do next to keep us safe.

Cruisers are generally a healthy lot and we rarely run into anyone who is sick.  Over the seven winter seasons that we have been afloat, the only sickness Brenda and I have faced has been from bugs caught from family and on flights during a stateside visit.

There are bugs that are unique to the Caribbean such as Dengue Fever, which one of our friends caught earlier in the season.  Fortunately, this disease generally isn’t life threatening but it can be very uncomfortable and lay up a sufferer for weeks.

Back in the day when sugar was king in these parts and the European powers were battling it out out for control of the islands of the West Indies, disease was rampant with tens of thousands loosing their lives from myriad diseases including  yellow fever, malaria and often, thanks, in part, to those boiled wool uniforms that the British wore, heat stroke.  It is said that as many as 50,000 British troops died in Antigua alone and that to this day, after a storm, bones still wash up on Galleon beach near the entrance of English Harbor where so many were buried.

Today the islands of the eastern Caribbean are generally safe from those scourges and to visit them doesn’t require any special preventative vaccines.

However, this year, as Coronavirus rages it’s way around the world, Brenda and I have found ourselves in an unsettling position, not sure if we should try to cut short our season and head home to the US or to extend our time here and wait to see what happens.

They say that one of the best ways to protect yourself from infection is “social distancing” and it surely seems that being on a boat with hundreds of feet between you and the next anchored boat is a good way to stay safe.   While we are currently in a marina we are still a lot farther from the next person than we’d be, in just one example, on a NYC subway during rush hour.

With all of the uncertainty, staying in touch with family and friends is particularly important and the good news is that making calls, getting email and keeping up on the news is easier than ever and our best year yet with our Google Fi phone that provides virtually unlimited data and phone calls.  While the speed of the service is slower than high speed cable, as long as we are in cell range, we are almost always in contact.  And, to that point, cell coverage in the islands is far better than at home given the fact that the towers are located on the top of high mountains and as long as we are within about 10 miles from shore, we are connected.  I wish that was the case at our home in CT where cell coverage is poor.

In past years we have relied on phone service and data from TMobile but that service remains quite slow and is often not strong enough on some of the islands to even make calls.   Today, with our Google Fi phone, we nearly always have access to data and calling the US is a snap as we can make totally free international calls to any phone using the Google app Hangouts.

Hangouts is wonderful and the connections are clear, unlike Skype which we used for many years but worked only sometimes and often dropped calls.  Another feature of Hangouts is that the person that you are calling doesn’t have to have the app installed on their phone and calls, local and long distance, are always free.  Prior to Hangouts, we used, and still do, WhatsApp but that service must be installed on both ends of the call.

So while our “social distance” is a lot better than it would be in the US, we are still being careful and we make a point to avoid anyone who looks like they have recently been on a plane or, God forbid, a cruise ship.   You know, tourists who are wearing new white sneakers, have a pasty complexion, camera hung over their neck, fanny pack and a fresh sunburn?   And, with fellow cruisers we no longer hug or shake hands although “elbow bumps” haven’t been a big part of our greetings so far.

And, speaking of contagions, while there are only a handful of confirmed cases in the Caribbean, and one reported here in St Lucia, all of the local stores are sold out of anything that even remotely resembles hand sanitizer.  Good luck buying Isopropyl alcohol although some very strong local rums that are  85% alcohol can probably be re-purposed as a sanitizer if it’s not made into a rum punch first.

All of this means that we really don’t know what we will do next, leave Pandora in Trinidad or take her back to CT for the summer?   So, for the moment we are here in the marina, waiting for the arrival of our new refrigeration compressor unit and monitoring the spread of the virus.

And, speaking of our fridge, I haven’t spoken about this for some time but when we returned to Pandora on New Year’s Eve, we discovered that our refrigeration was showing signs of failure and it was time to either get new parts for the current system or to yank it out and put in something else.  While there are other systems on Pandora that are more critical, like the main engine, navigation plotters or perhaps most importantly, the autopilot, refrigeration looms large as something that we’d prefer not to live without.  A room temperature rum punch just wouldn’t do.

After a few techs visited us we learned that it was only a matter of time until our fridge would be totally dead so I arranged an order to replace the compressor and electronics from a supplier in the US.

The problem is that the vendor didn’t stock a 24v unit and had to order parts and put a custom unit together as a special order.  At first he told me that it was going to be about six weeks before he would be in a position to ship out the unit but it seemed that every week and missed deadline had him pushing out the ship date yet another week.

Eventually, he said that he “felt very confident” that he would be able to ship on February 24th, more than two weeks ago.  After that, “radio silence” and finally a message that the unit would finally ship after a series of missed deadlines.

He blew by that and other deadlines but the good news is that on Friday, two days ago, I finally received a note from FedEx confirming that the unit had been shipped and that it will be arriving here in on Tuesday evening.  That’s very good news but I’ll admit that the urgency of having perfectly functioning refrigeration is fading a bit when put up against the looming threat of the Coronavirus as it makes it’s way, wreaking havoc, around the world.

Of course, as we sit here in the sunny Caribbean, an area that has been relatively isolated from the virus so far, with only few cases scattered here and there, we are beginning to wonder if we will be able to bring Pandora home or if we will have to make other arrangements and run her south to Trinidad for the hurricane season and fly home from there.

And, the question of, will we be able to get a flight home at all, has added a mix of uncertainty and anxiety to the situation and put us in a position that we never would have imagined just a few weeks ago.  Additionally, some of the islands have added very strict rules and reporting before you are able to check in.   For example, Panama, not on our itinerary, has instituted a mandatory two week quarantine on your boat before you will be allowed to go ashore.  Trinidad now requires a detailed list of health questions and landfalls made over the last few months, submitted 72 hours prior to arrival, before they will decide if you can check in at all.

And, as we sit here, relatively isolated from crowds, it seems that perhaps we are better off in this out-of-the-way place, than if we were in the more heavily populated NY-Boston area.   Tourism has all but dried up and the islands are no longer allowing cruise ships to dock at all.

I spoke with one of my delivery crew a few days ago and he remains committed to coming down to make the trip home with me but did mention that he was wondering if flights south to Antigua, where we plan on leaving from, might be canceled.  Or worse, that we would somehow be denied entry into the US once we arrived.

In any event, I guess that we will just have to sit here and wait to see how things unfold and hope that the current administration can find a way to calm things down and project a sense that they know what to do, if anyone does.

For now, hunkering down, with a nod to social distancing,  in paradise.  Not a bad view of Pandora in her slip. 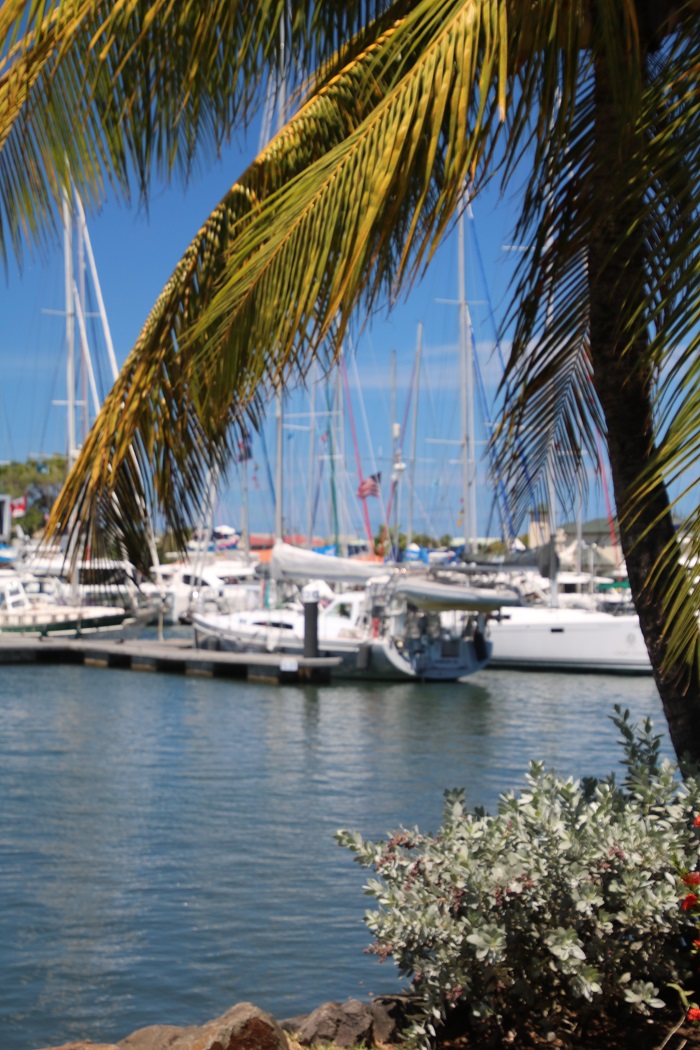 And, all of this brings me back to the question of where is the best place to be during a Zombie Apocalypse or, in this case, an outbreak of Coronavirus.  So, with that in mind, I decided to do a bit of research and here is what I found.

According to the definitive website Zombie-Guide,  lucky for us, they say that a boat is the safest place to be during an apocalypse so I’ll close with this bit of advice from them.

“Boats and ships can make a great escape vessel in case of any emergency. Most important however is that you train your crew before SHTF and for ALL supplies to be packed and ready at all times. An added bonus here is that your emergency vessel becomes a holiday home and every vacation is a prepping experience that combines your vacation with crucial training. Learning how to fish and cook in the wild are now fun and a vacation activity, while still teaching valuable lessons in case of an emergency. During these vacations you’ll already find out what items you missed, so you can pack them for the next trip. My only real concern with boats and ships though, is that you’ll be vulnerable. Make sure you pack guns and plenty of ammo and have at least one big caliber gun on board to pack a punch. Also, learn how to fix the engine…”

But, I didn’t stop there and checked out YouTube to see what other experts had to say about boats and Apocalyptic events.    This is one video in a series of “where to ride out a zombie apocalypse”, covering such locations as a mall, office building roof etc…  It seems that indeed, boats are the #1 recommended place.  So there you have it, in the event of a Zombie Apocalypse or viral outbreak, boats are a pretty good place to practice “social distancing” and Pandora, beyond being a great place to spend time when it’s cold up north, may prove to be a great hedge against threats from Zombies and rampant virus attacks.

I sure hope I’m right.  So far, we haven’t seen a single zombie.

2 responses to “It’s a Zombie Apocalypse and we are on a boat.”