As I write this we are tied up in the Rodney Bay Marina, St Lucia where we plan to stay for about ten days while we wait for our new fridge compressor to arrive and be installed.  Wish us luck as it’s supposed to ship FedEx tomorrow, Monday.  Fingers crossed as he has blown by prior deadlines.

It’s been a long and winding road, waiting for the unit to ship.  Part of the problem is that the company that made our system, Glacier Bay, went of business more than ten years ago so I am only able to get replacement parts from a small company in CA that purchased the rights to the products and now sort of makes them to order, in a garage I suspect give the fact that it’s taken more than 6 weeks since I ordered it, for them to finally ship.

Getting parts for boats in the islands is notoriously difficult as anything sent has to go via something like International FedEx or by ship in a container and then, once arrived, cleared through a local agent.  In the case of St Lucia, at least there isn’t duty to pay as the parts I have ordered are going to a “yacht in transit”.

Some islands, like Grenada, apply extra import duty but St Lucia and many other islands understand that boats are portable and can go elsewhere if they are competitive and don’t apply extra fees to things shipped in for boats that are transient.

So, the latest news has our unit shipping, all 40 lbs of it, on Monday and I am told that it will arrive here on the island on Wednesday or Thursday.   The next step in the process will be for the local agent to clear the package which I am told, from the “horses mouth” that this will happen quickly, in a day or two.  Once it’s here, I have an installer lined up who seems to be very responsive so I am hopeful that we will have everything resolved by the end of next weekend.

The good news about the “waiting part” is that marinas in the Caribbean can be quite reasonable, in this case, the weekly rate per foot is something like $.75/ft per day with the weekly rate at buy-a-week and only pay for 6 days.  And, it gets better as with a week you get three bonus days at no charge, which works out to about $25 a day for our ten day stay.

Of course, water and electric are extra and can really add up.  However, all and all a day on the dock here is about 1/4 of the cost of tying up to a mooring in Nantucket and here we are on a dock and a nice one at that.

And, even though it’s inexpensive, it’s a really nice marina with beautiful floating docks. 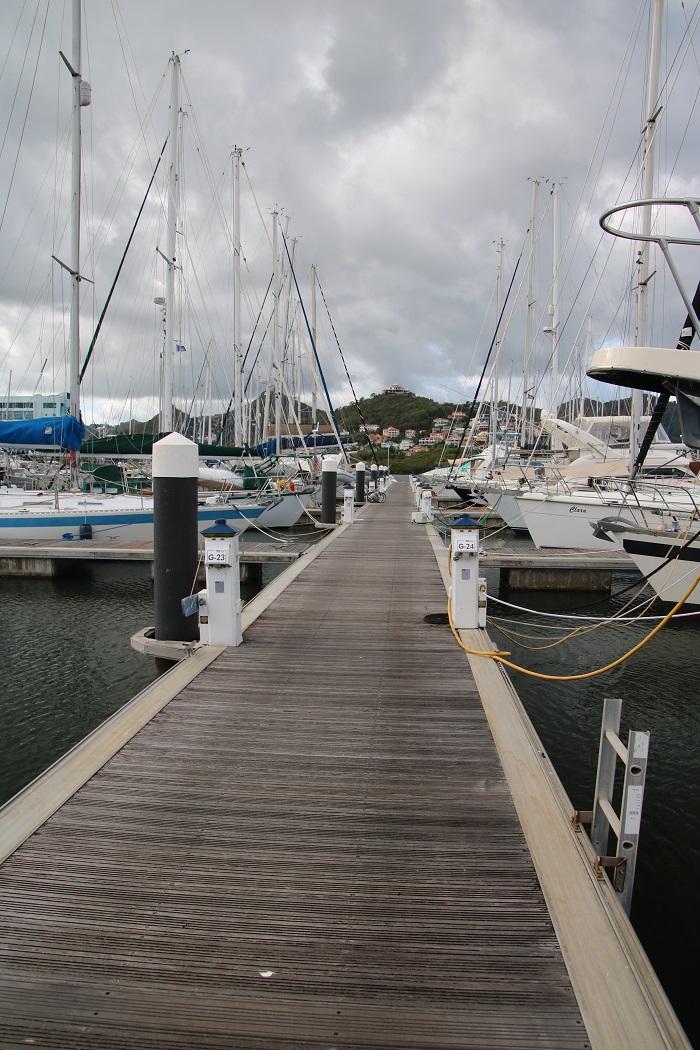 Here’s Pandora all snug and tied up. 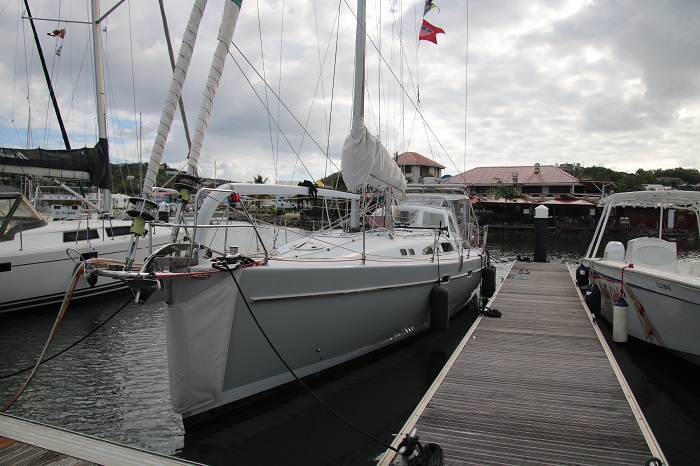 Just about everywhere we go we are approached by locals who offer to do work on our boat.  Here I hired a guy, one of many that approached me, to clean Pandora from top to bottom.  A key part of this was to polish the stainless, which had gotten a bit dingy and spotty over the last few months.

When I was in Antigua I hired someone to clean her and we agreed to a price of $250US for a job that took nearly two full days which was still a good deal.   However, here in St Lucia, rates are even lower and I was able to get the job done for half of that price and he even supplied some of the cleaning products himself.  He’s a very nice gay and spent all day yesterday working hard and today showed up with a helper to finish the job.  Again, he was here for much of the day.

Now Pandora is really clean and all the stainless sparkles.   He was even able to get some stubborn over-spray paint off of the bowsprit that was left there when the boat was painted in the US.  The guy in Antigua couldn’t get it off but somehow he did.  And, the anchor, after so much time in the water had become very discolored.  Not now. 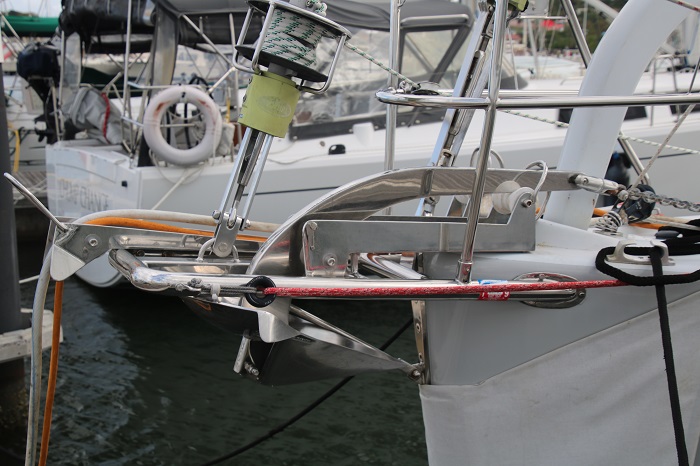 And speaking of the paint job.  My new paint took a turn for the worse when a young couple ran into me with a small Hobie catamaran from the nearby Sandals resort out in the bay, where we anchored the first night when we arrived in St Lucia.  It was quite windy and they lost control of the boat as they raced along near Pandora.  In spite of my fending them off twice, they finally rammed me and put some nasty scrapes on the aft port quarter that will have to be repaired when I get home.

Fortunately, the water sports manager at the Sandals resort was very diligent in helping me quickly file a claim.  Within a day he had hired a surveyor to assess the damage and two days later saw to it that I was paid.  After only three days all of this was done and the couple send money to us to cover the damage via Venmo, a total of $1,400, not a trifling amount.

I felt badly for the young couple but with may new paint job, I hated to have scratches so am glad that they were willing to cover the damage.  Had they put up a fight, I doubt that I would have been able to find a way to enforce the claim.  So, one more thing to address when I get home.

Perhaps it’s time for me to learn how to repair scratches as hardly a year goes by without a new one or two.  In anticipation of getting scratches, I had Pandora painted with Alexseal specifically because it’s supposedly somewhat easier to repair than other harder paints.   Details to come on that score, I guess.

I can tell you that things could have easily been worse.  One of the boats that we have been cruising with had major engine problems about a week ago and are now waiting in Martinique for a new engine to be installed.  Another is making plans to limp back to Trinidad to get a crack in their hull fixed.  They tangled with a piece of floating line, while towing the boat that lost their engine, and the tangled line wrenched their prop shaft and cracked the hull.  Now they can’t use their engine and had to be towed to anchor in Martinique by me and a friend with our dinks. 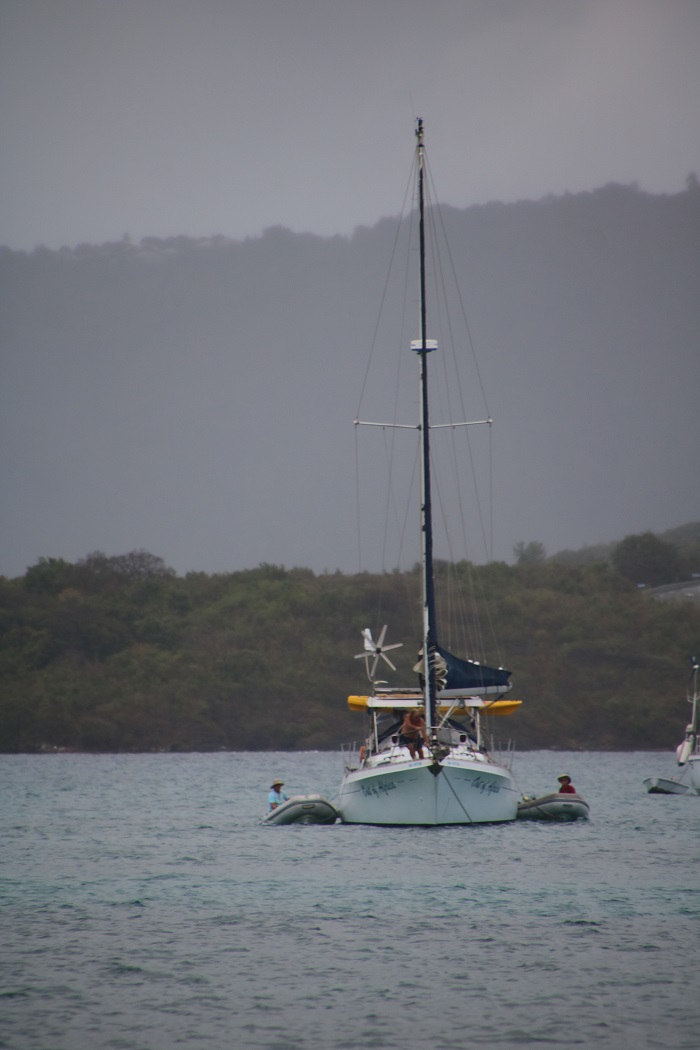 Once we arrived where he wanted to anchor, we both backed down to set his anchor.   Cruisers helping cruisers and boat repair for yet another in exotic places. 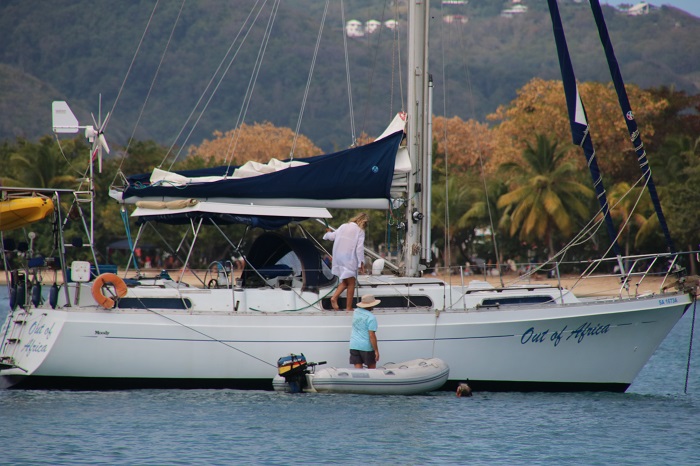 Setting aside the inevitable damage, 0ne of the fun parts of cruising is seeing friends along the way, some new and some from prior years.    This season we have been buddy-boating with a number of couples and in particular, Bill and Maureen on Kalunamoo, who we first met on our initial trip down the Intra Coastal Waterway our first year out in 2012.

Kalunamoo is here in the marina across from us.   They are also here for boat repair in exotic places.  In this case, to their engine, hopefully beginning tomorrow. 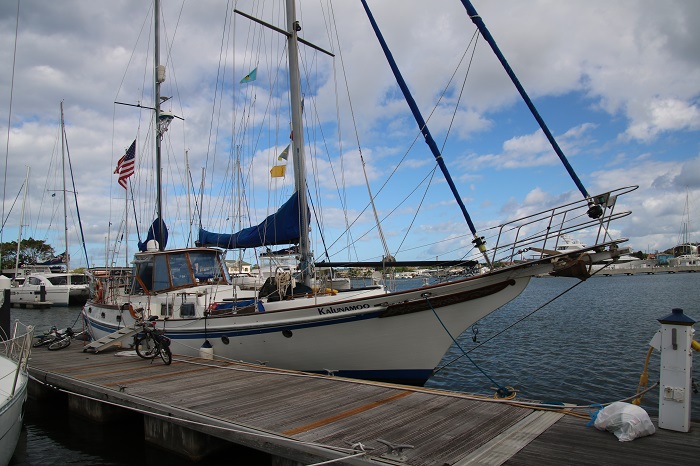 It’s pretty amazing that everywhere we go there is someone we know.    This is a photo of the group that we were with for several weeks.  We had the gang over for drinks on our last night kin Martinique before everyone headed their own way. 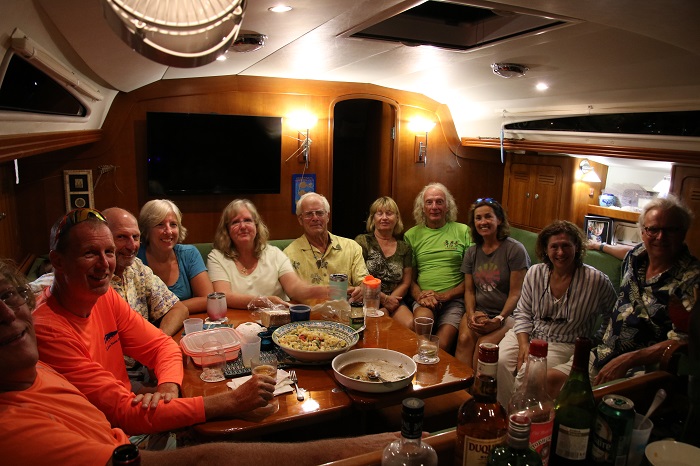 And when we aren’t hanging out with friends, it’s, you guessed it, boat repair in exotic places as I have also been tackling a number of other smaller projects. I’m  chipping away at the list and still have a few more to go.  However, we have plenty of time as we expect to stay here in the marina for the rest of the week and their is a great ship’s store in the marina.

Perhaps when I have a break from, y0u guessed it, boat repair, we will rent a car and tour the island with Bill and Maureen.  Tuesday looks like a good day.

So, for now, it’s what it always is, boat repair in exotic places.  I sure hope that the compressor ships tomorrow so we can get on with this and find a new place to fix things.  Of course, it’s only a matter of time till something else breaks.