After a few days in St Pierre in the shadow of Mt Pele, our first stop in Martinique, we moved down to Fort de France, the capital.  This is one of our favorite stops where we anchor in a historic harbor sandwiched between a Napoleonic era fort to one side… 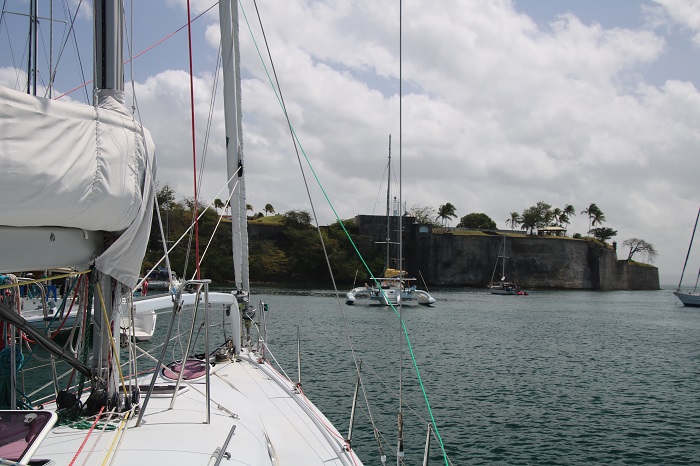 And a modern city on the other. 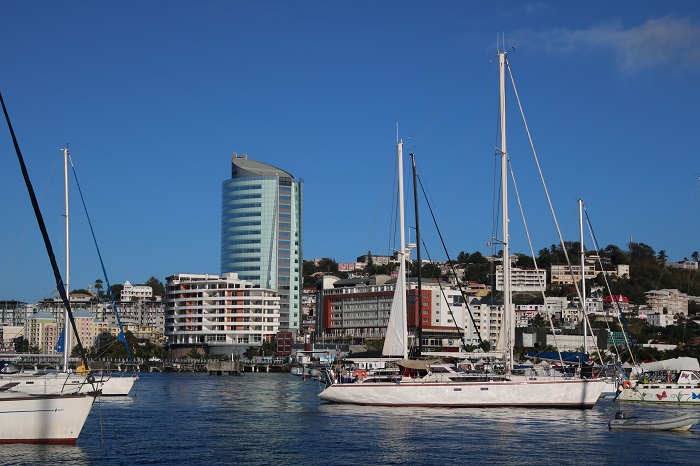 Big city or not, the view in the distance is a constant reminder that we are still in the tropics with distant mountains shrouded in clouds and mist. 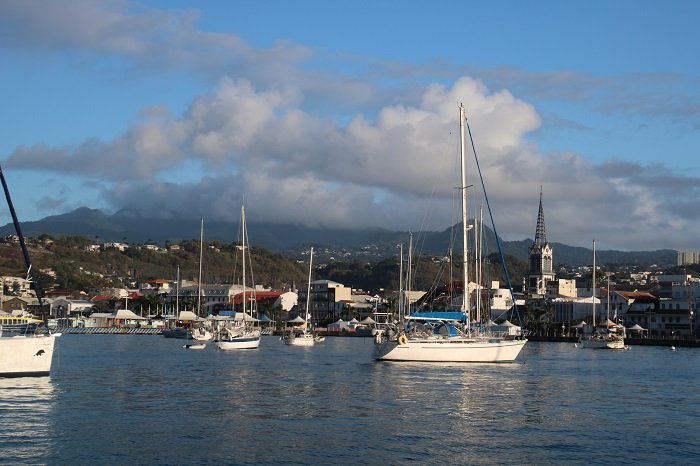 The harbor is busy and very rolly during the day with a constant stream of ferry boats leaving big wakes and cruise ships, sometimes 5 a day, coming and going. 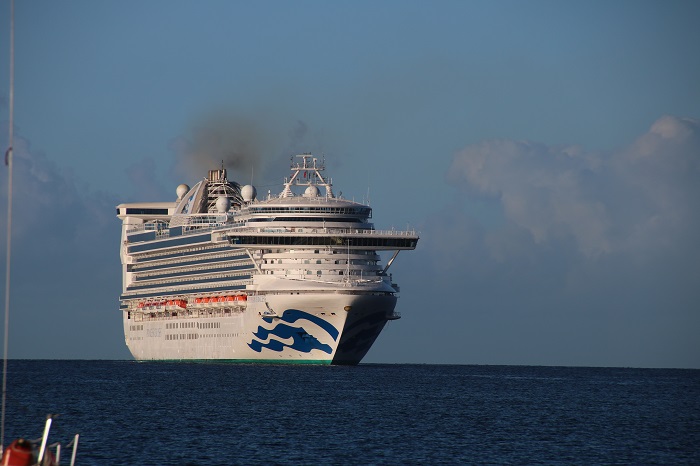 Yesterday was the first day of carnival, a four day festival of parades and fun that runs though next Wednesday.  The fun begins each afternoon at 4:00 and continues well into the we hours with near constant drumming and firecracker detonations late into the night.

The parade, which passed us three times, began with what looked like, I guess,  some sort of nod to native Americans. 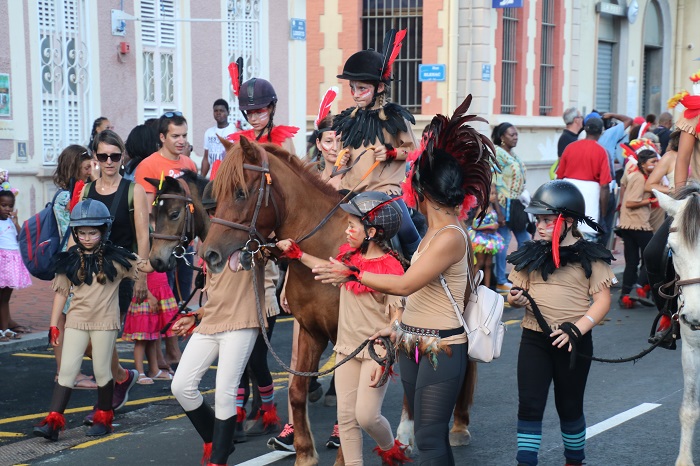 This lady was clearly not a newcomer to such events and knew that she was indeed “looking marvelous”. 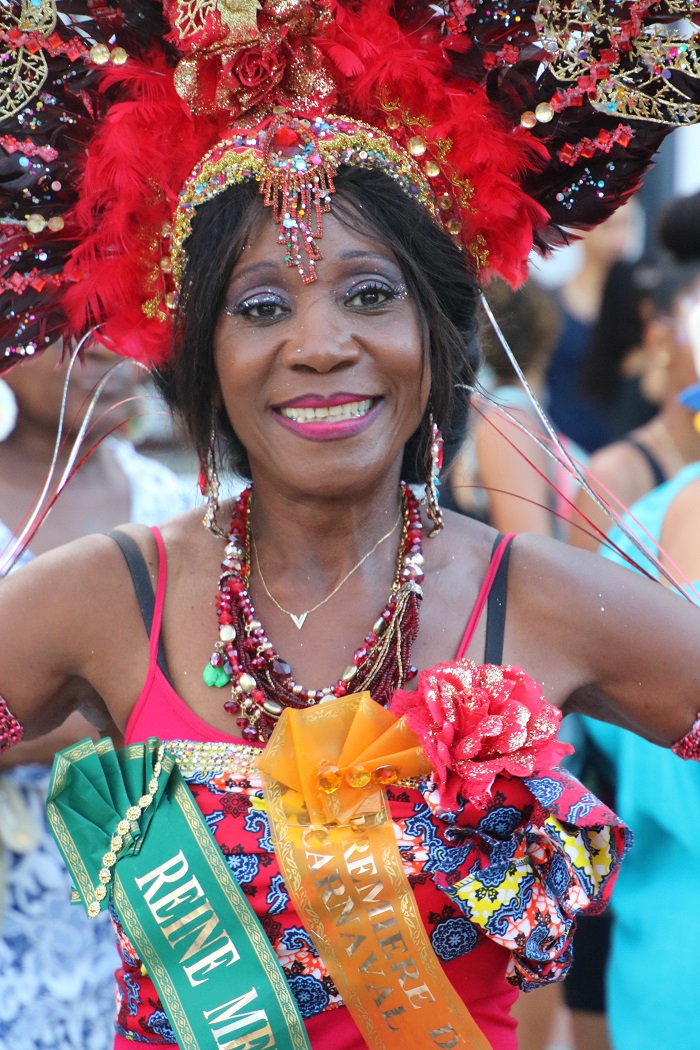 Not sure what this costume was all about, very elaborate and festooned with  with coconuts. 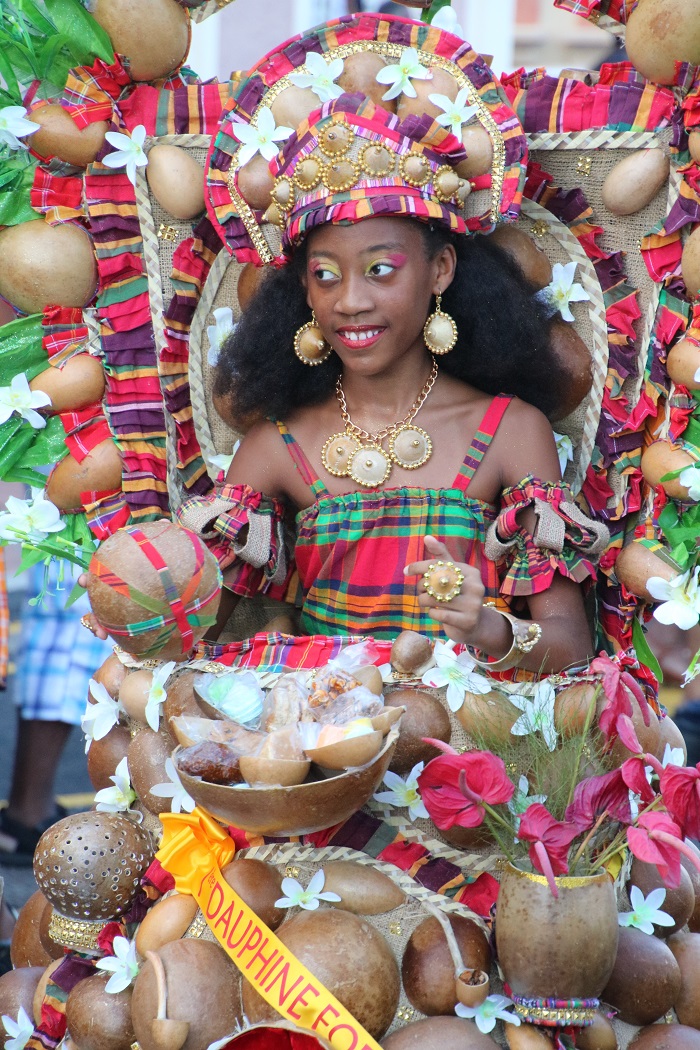 This one was, well, I’m not sure but it was, but it was very elaborate. 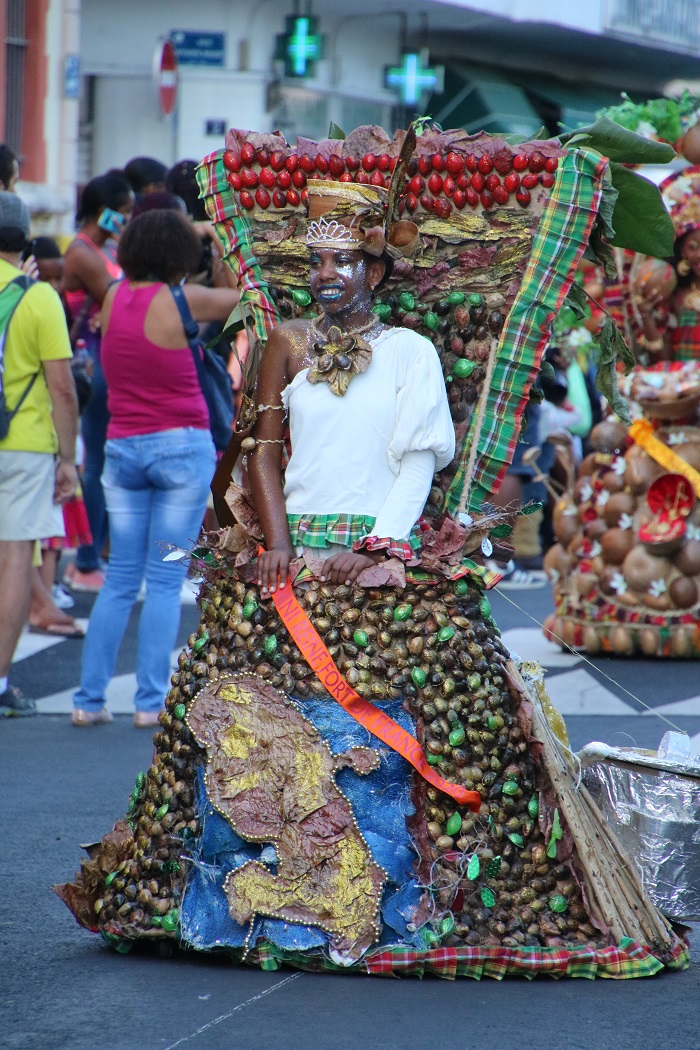 And an enthusiastic group with REALLY LOUD drumming. 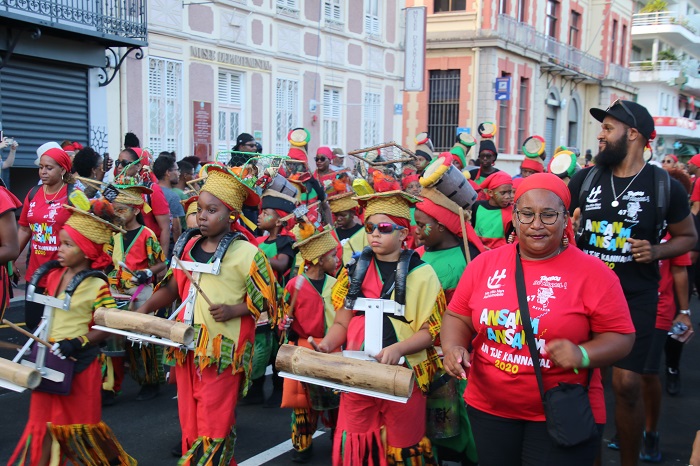 Many of the children in the group sported these hats.  What were they all about?  I have no idea. 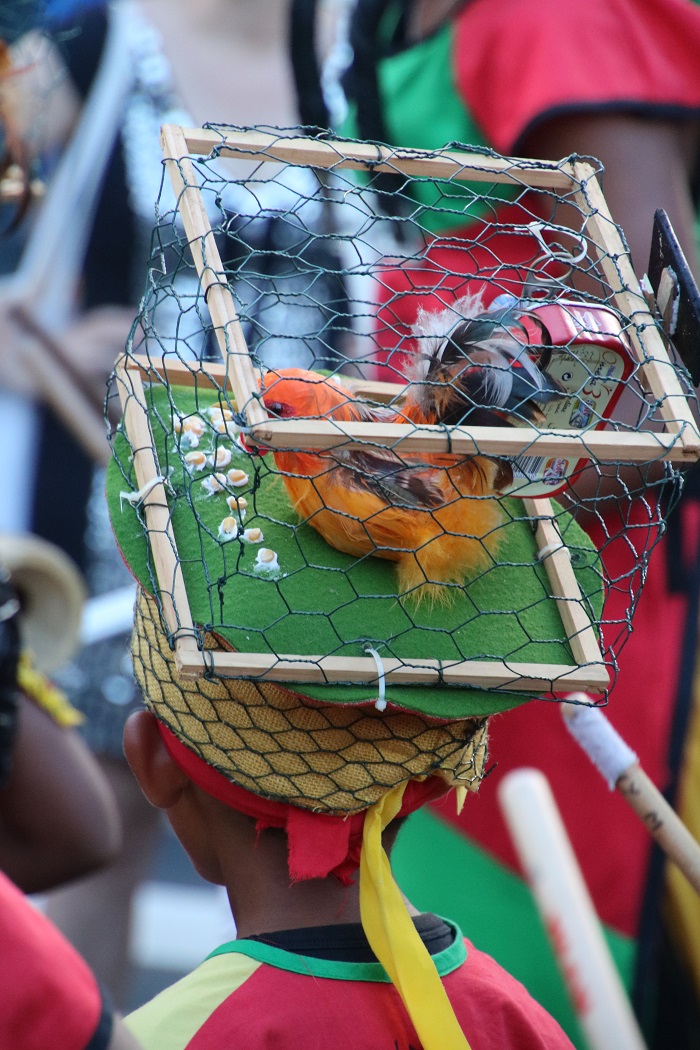 This young woman was clearly having a great time. 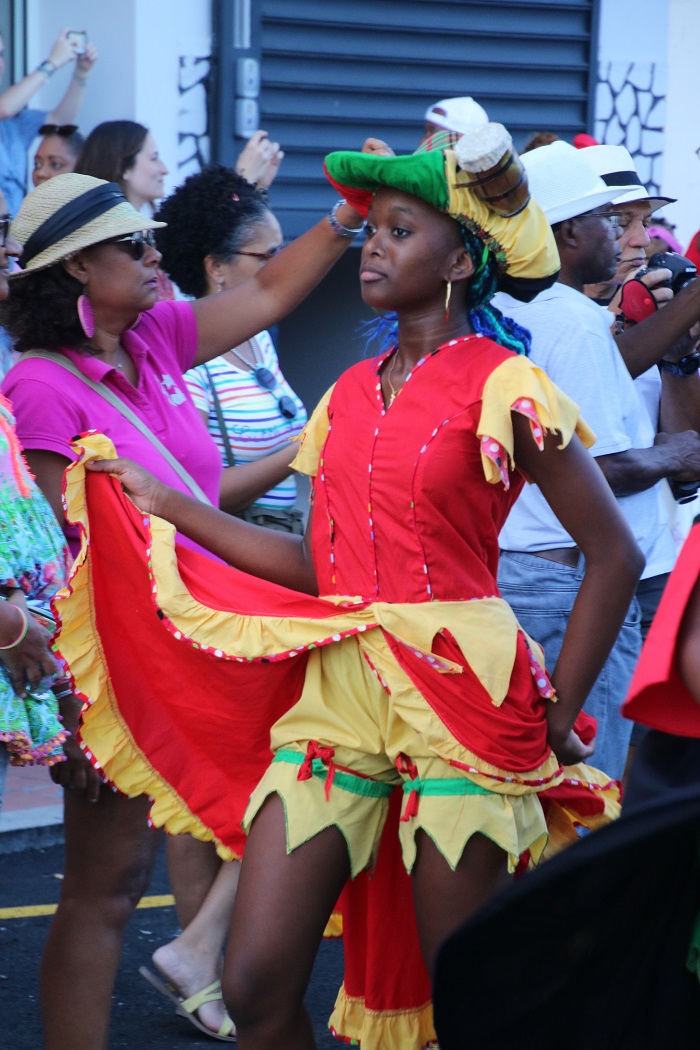 Spectators, many decorated with face paint, lined the route. 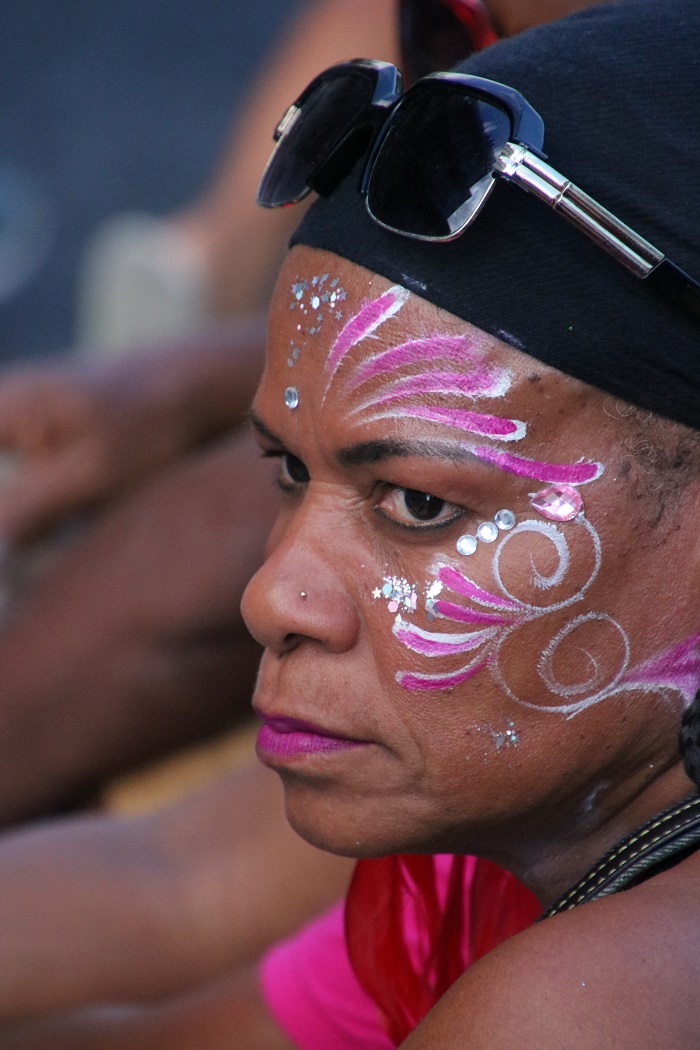 But this guy was perhaps the winner.   Of course, he, like everyone else, had his smartphone.  No pockets I guess. 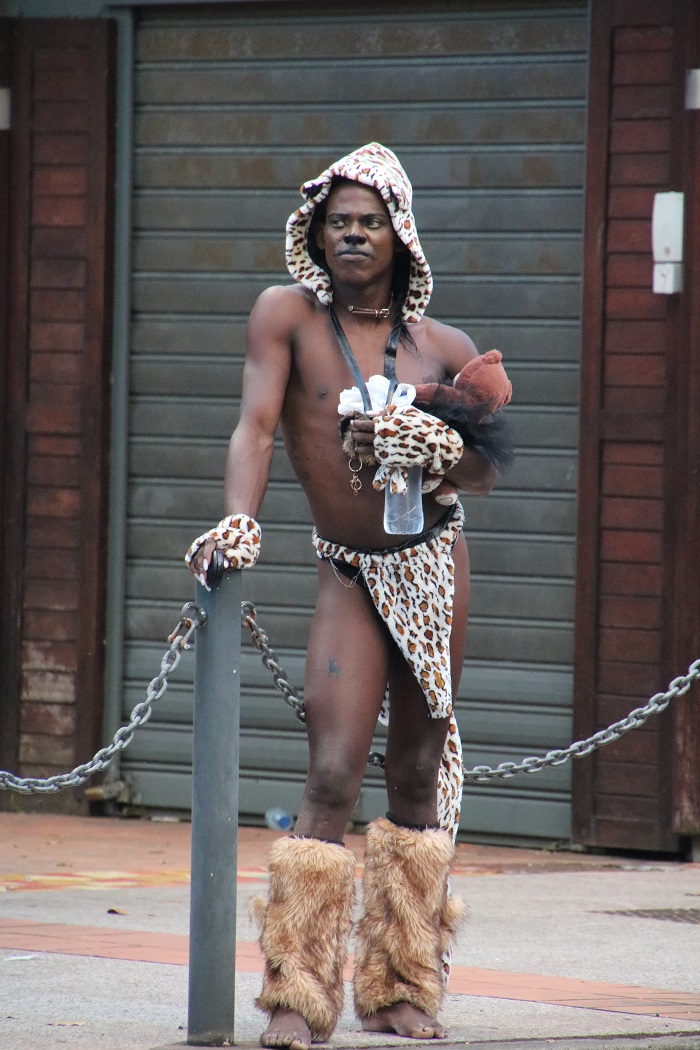 There was something about going in drag was a common theme.  What is it about guys and bikinis?  I’ll have to ask Brenda what she thinks.  A g-string and feather boa?  Is it me?

Not sure where the stuffed giraffe fit in.  I guess you had to be there to see the connection, such as it was. 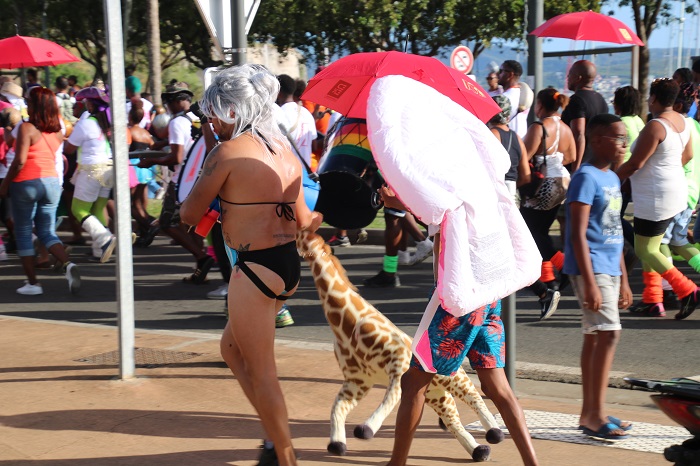 Umbrellas were clearly a theme for this large and LOUD group. 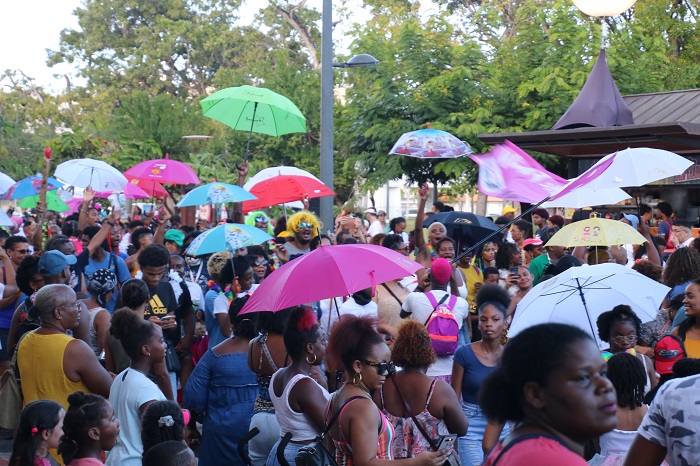 The noise of this VERY enthusiastic drummer set off Brenda’s Apple watch alert that she was being exposed to damaging noise in excess of 90db.

Clearly feeling the beat, this particularly well put together lady was clearly enjoying herself and posed every few feet for photographers. 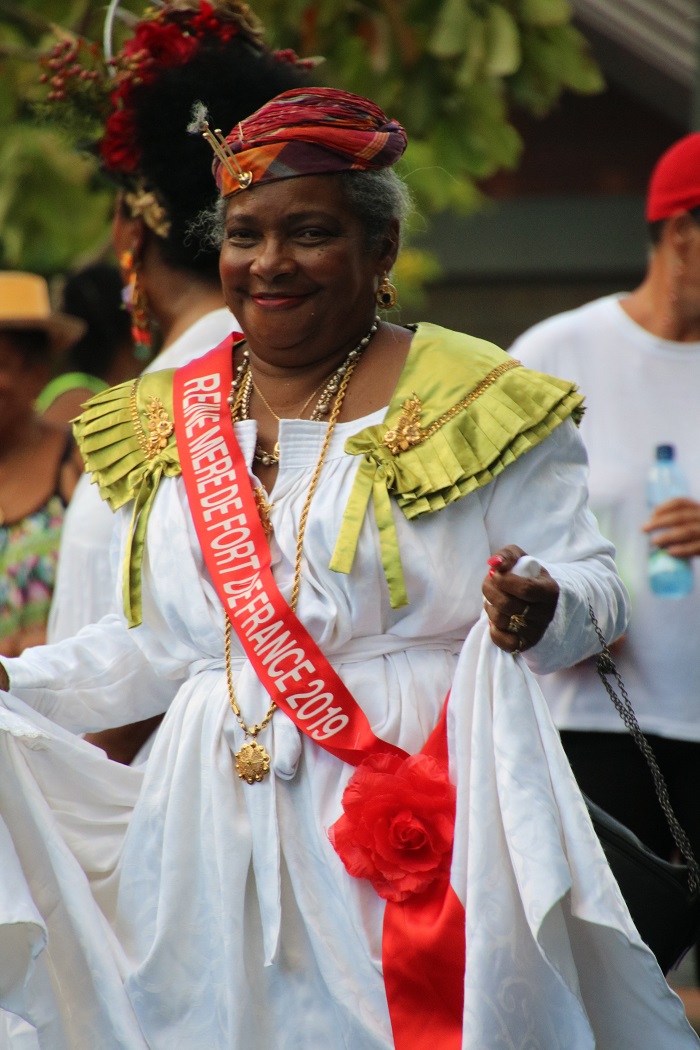 This young lady seemed a bit insecure in her costume.  Her “get-up”, like many of the others, was so heavy that it had wheels to help her along as well as an “escort” to give her a shove when she was hung up on rough pavement. 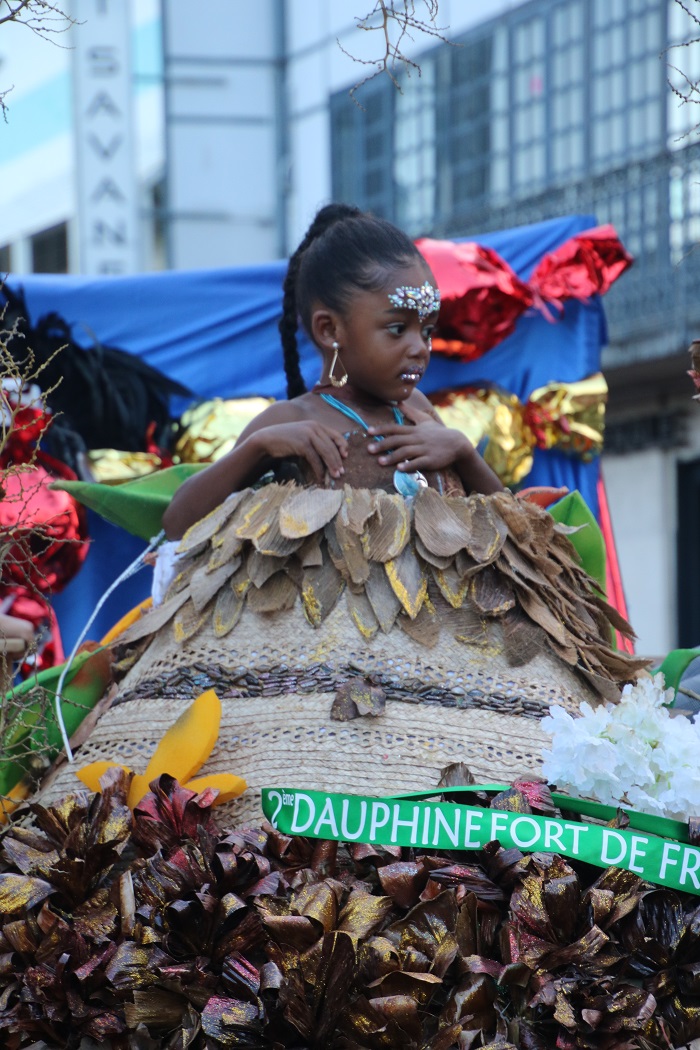 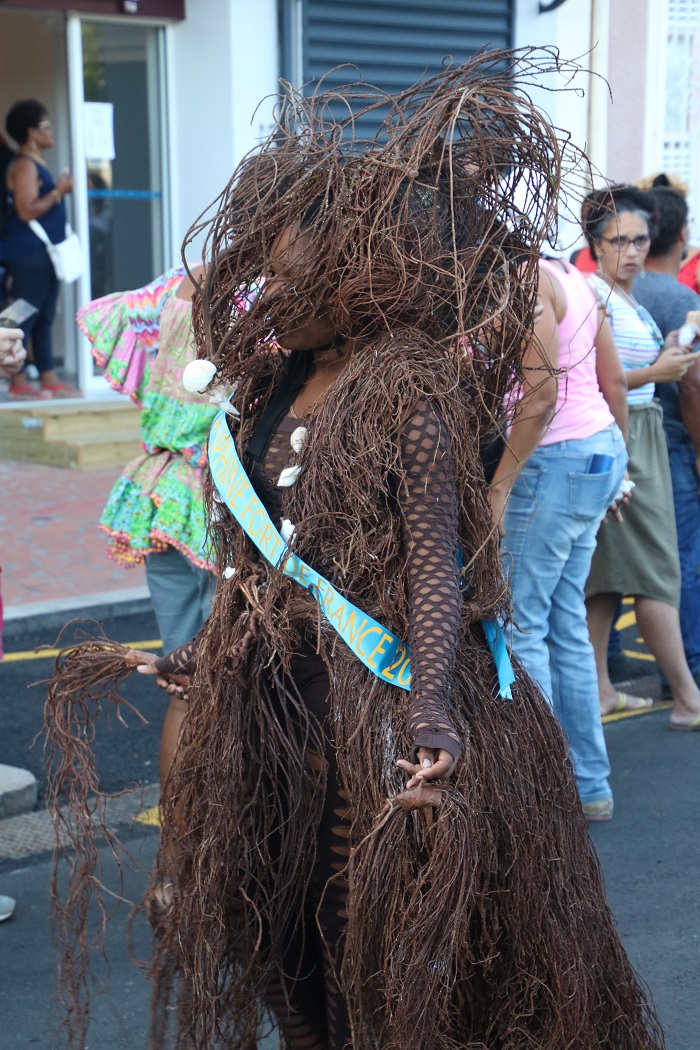 This young woman carried herself in style, never letting her radiant smile fade for even an instant, well perhaps not until she passed us for the third time. 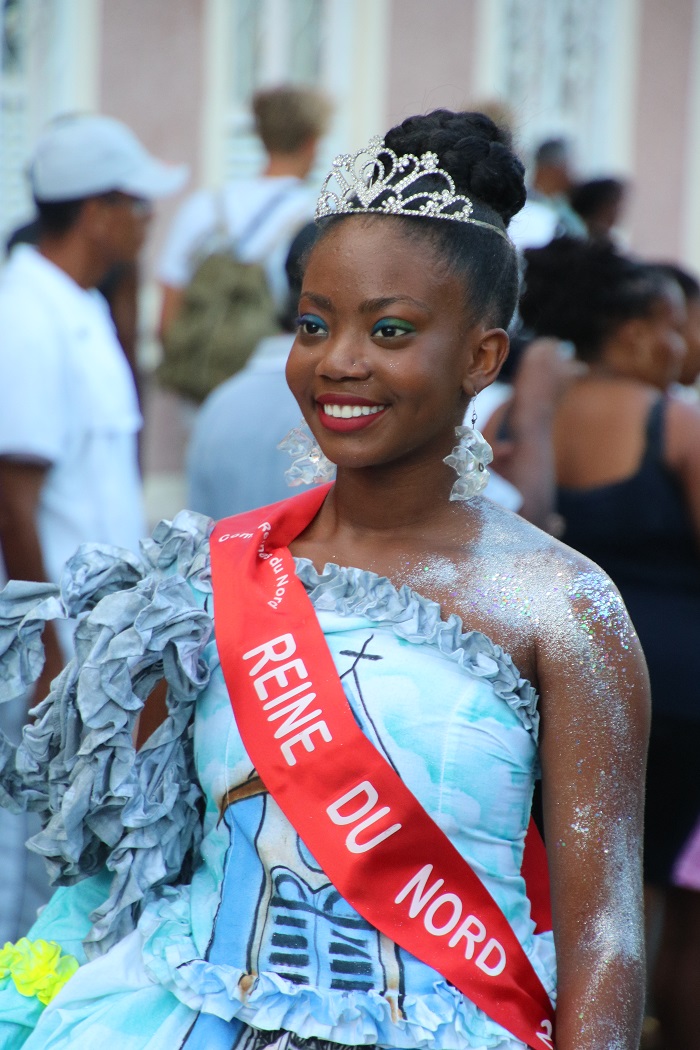 This photo of a mother and daughter pretty much sums up what it was like to be there.  I can’t wait till tonight to see what is in store. 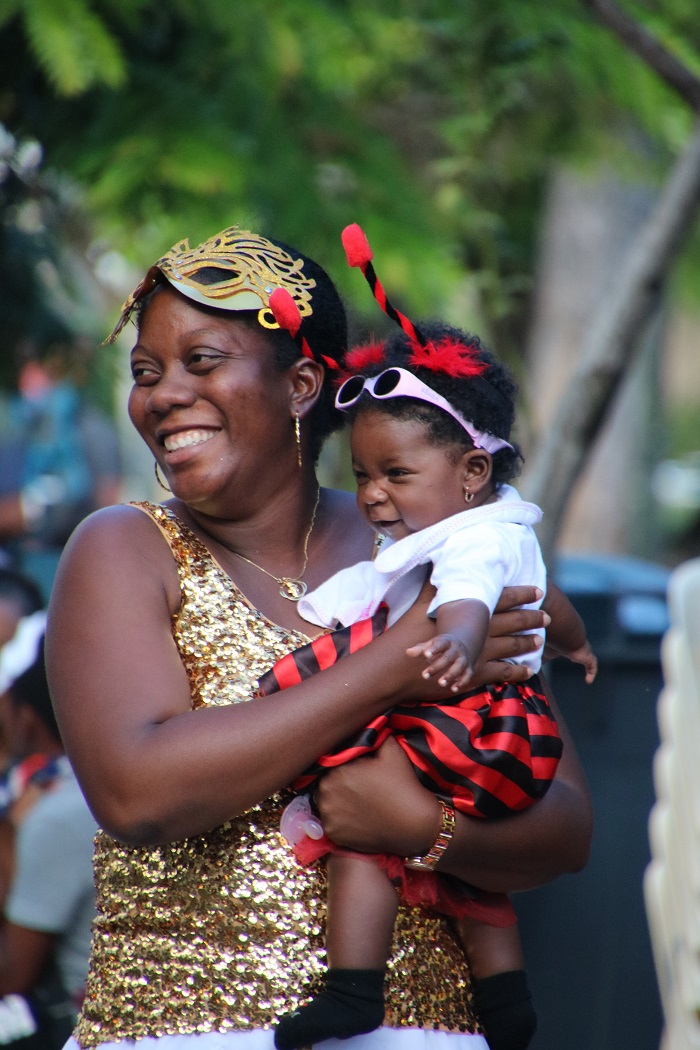 And, with all the fun in town the harbor is getting crowded as more cruisers arrive each day.    This is what I woke up to this morning after the wind shifted direction over night.  And yes, they were as close as that.   They were a nice couple from Denmark, taking time off from work to cruise with their two children.   Can I borrow a bit of Grey Poupon? 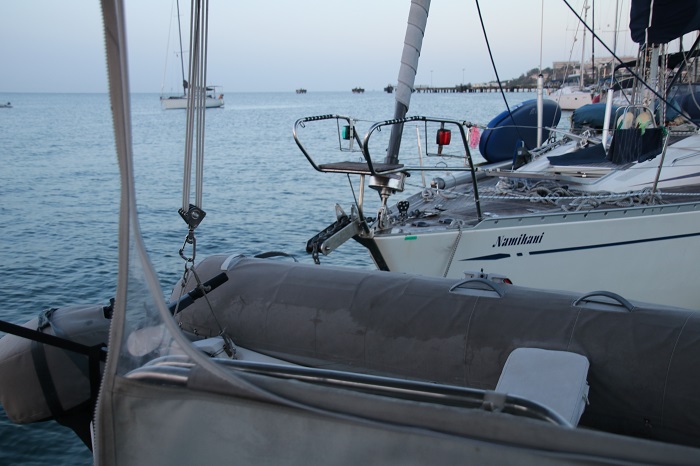 It’s great sport, watching newcomers look for a spot to anchor and it seems that there is always, sort of, room for one more. 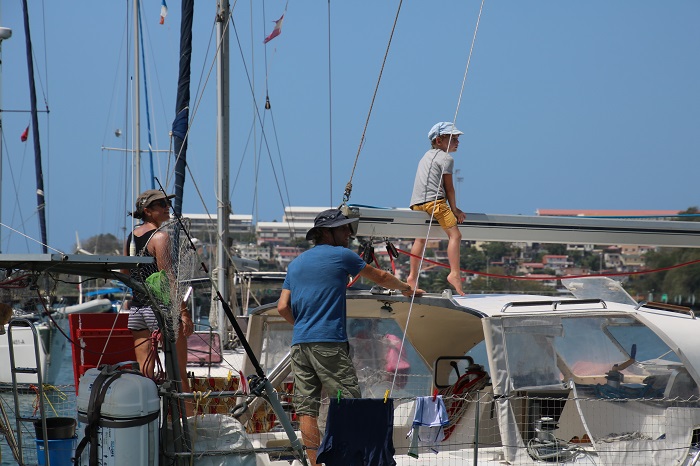 It’s pretty clear that the people of Martinique really know how to put on a party. Brenda and I can’t wait to see what tonight will bring.

It is, after all, party time and the folks in Martinique really know how to put on a party!

One response to “It’s Carnival, Martinique, and it’s party time!”