Humty, his snake and a saw

When we first arrived in Dominica I took a walk along the main road in town to visit the market and spied this guy with an alarmingly large snake wrapped around his neck.

Separately, I had heard that there was someone living on the beach that salvaged wood in the rain forest from trees that had been knocked down during hurricane Maria that had so decimated the island.

It turned out to be the same guy and his name is Humty.  I’m not positive about the spelling but it is pronounced (Hum-tee).  He told me that he had found the snake in the bush while working.    I wanted to learn more. 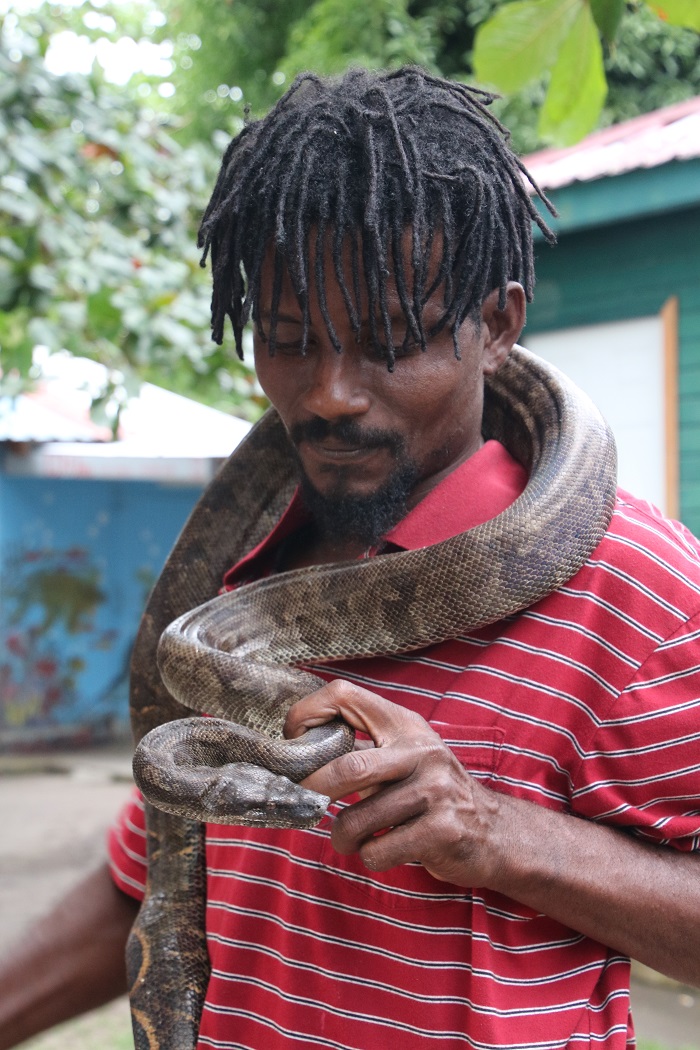 I had gotten a taste of some of the exotic hardwoods available on the island when we visited the chocolate factory and now wanted to see for myself, how the wood was salvaged.   When I asked about how he cut logs into boards he told me that he just used his chainsaw and free-handed the log into boards.  Now that I had to see…

We agreed to meet the following morning, Sunday at 09:00 and head out.  I had somehow assumed that he had a truck or at least access to one and I was surprised to see him hoist his saw, an alarming one with a blade of some 30″ long, up onto his shoulder and off we walked down the road.  Along the way, and the walk on the road was about two miles,  a friend of his stopped with a pickup truck and gave us a lift.

Before we headed into the forest we stopped at a small general store for something to drink if we became thirsty.  I got a bottle of water and Humty, a beer.  So off we walked into the bush, Humty with this huge saw on his shoulder and beer in the other hand.  Oh yeah, and he had a ganja cigarette in his lips.   And, don’t forget that it was still early on a Sunday morning, a sort of double fisted hair of the dog, I guess.

I can’t say that I had ever thought of beer, “local herbs” and a chainsaw were a great combination, especially first thing on a Sunday morning.  Oh yeah, I almost forgot, he also had a long and quite menacing looking machete. 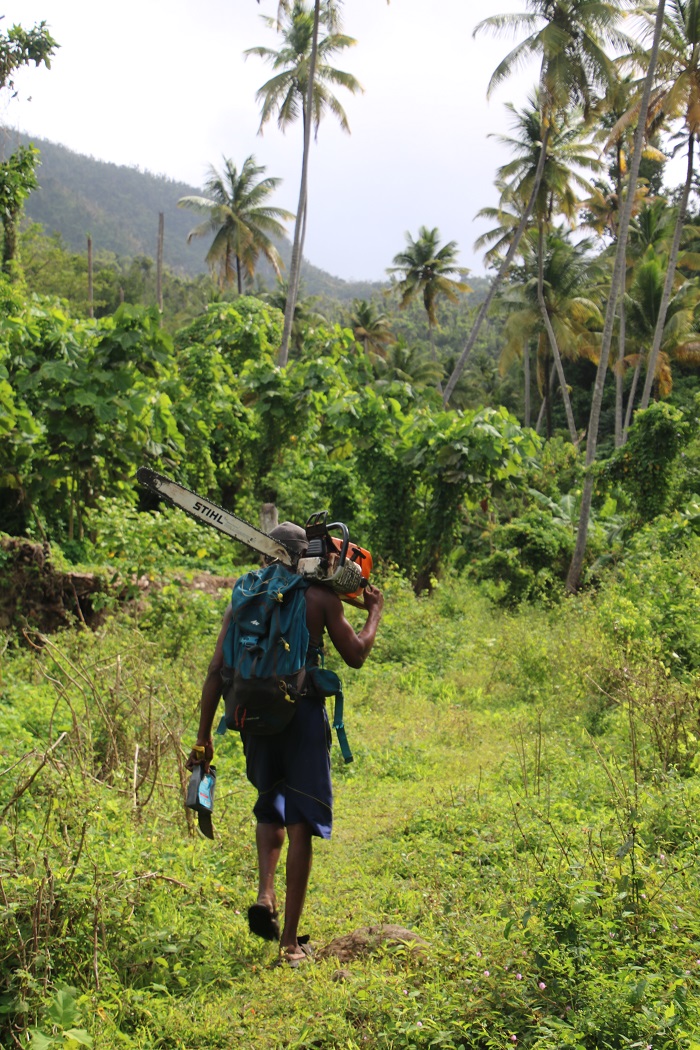 Over the years, I had seen portable sawmills that can turn a log into boards using a really long chainsaw that was guided by rails and other equipment that made the cuts quite precise but the idea of someone cutting logs into boards by eye and a steady hand was something I found hard to imagine.

We didn’t have to go very far into the bush but after perhaps a half mile we crossed a small stream and found our way into a clearing with huge downed trees scattered here and there.  In the clearing some locals had planted a large number of what I learned were coffee tree seedlings along with banana plants. 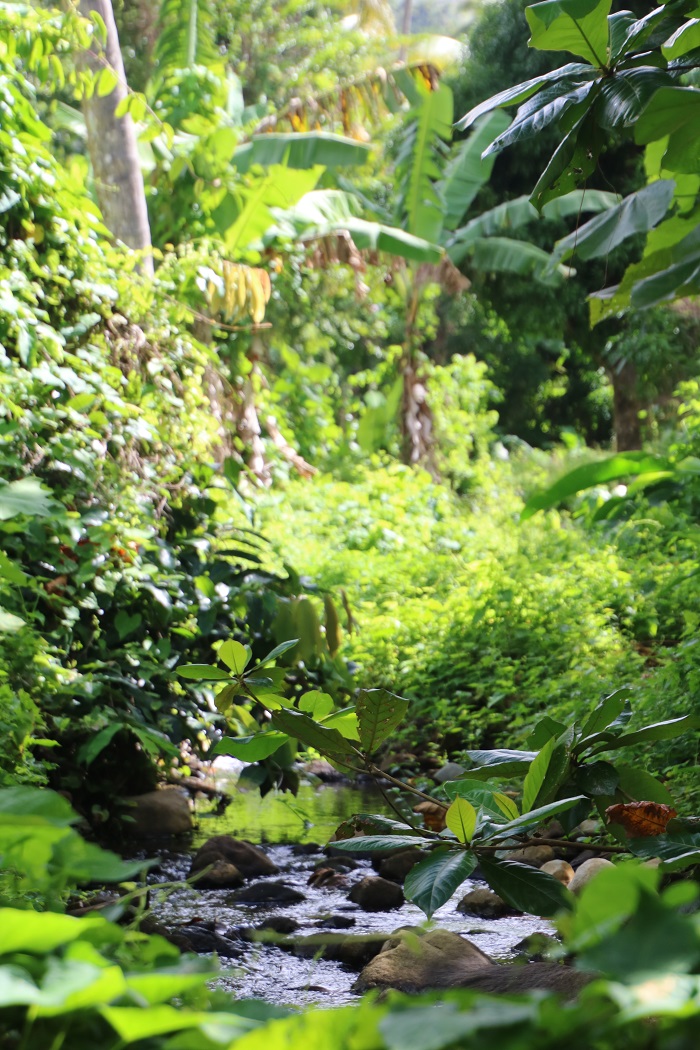 Humty selected a promising log, some 20″ in diameter and sat down to sharpen his saw, one tooth at a time with a round file.  30 minutes later he was ready to make his first cut. 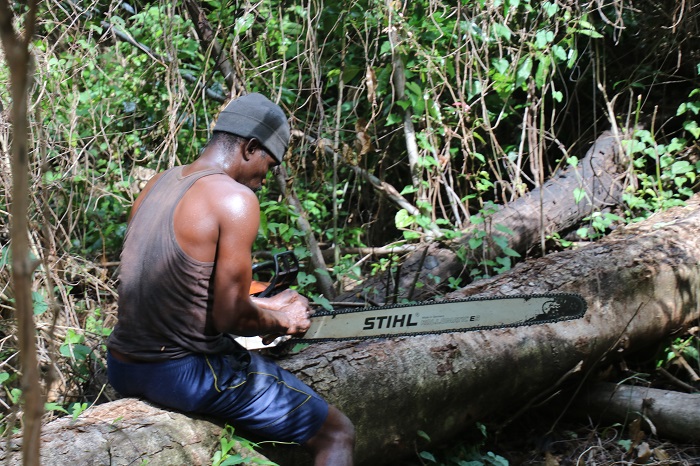 Then he marked the log to a bit over 5′ and removed a section.   His newly sharpened saw went through it like soft balsa. 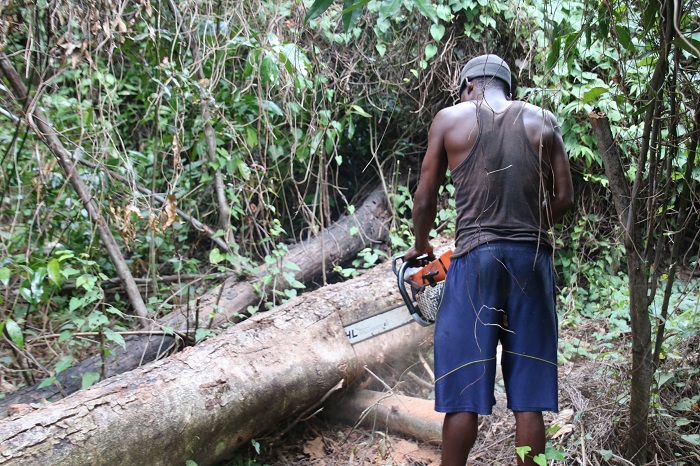 After rolling the newly cut log onto a base of smaller logs and bracing it up against a small tree, he proceeded to carefully run his saw down the length of the log, marking it for the individual boards he planned to cut, each about 1 1/4″ thick.   The  cuts were more precise than this photo suggests. 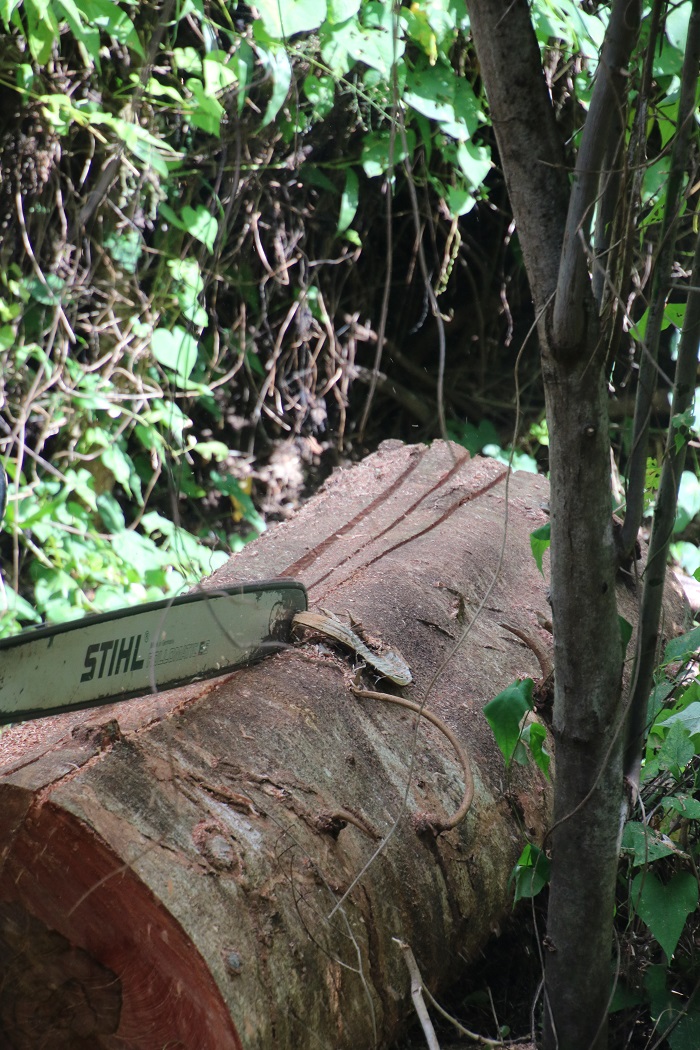 He began at the end of the log closest to him and progressively drew the saw from end to end, each cut only a fraction of an inch deeper than the last. 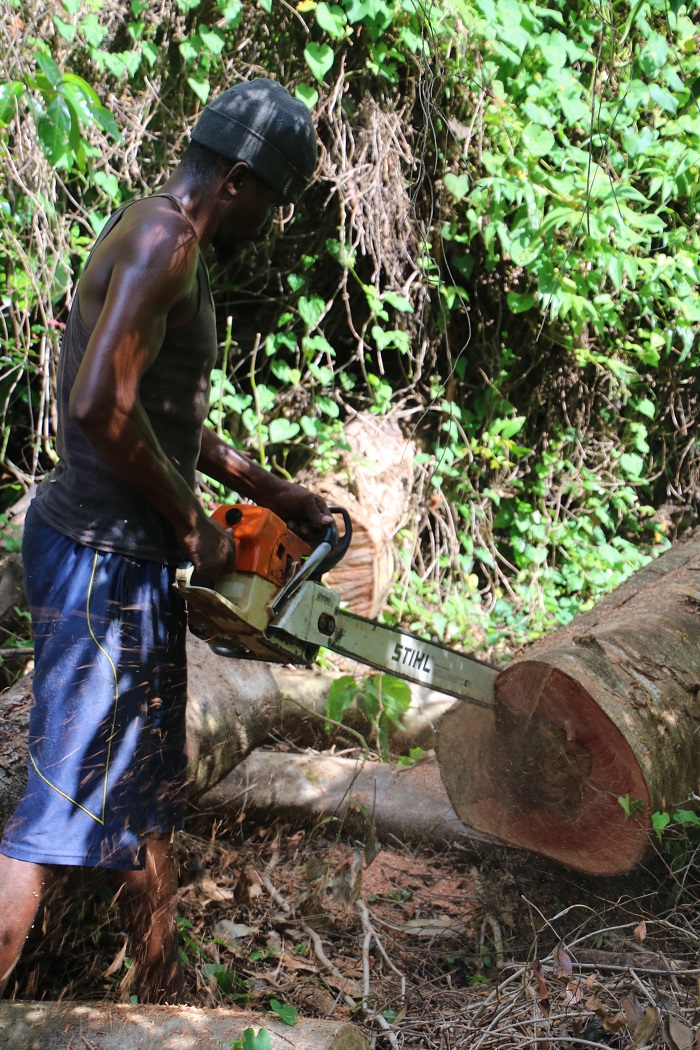 Beginning on the left, after marking all of the boards, he slowly cut deeper and deeper until the board was only supported at the far end by a small uncut wedge of wood. 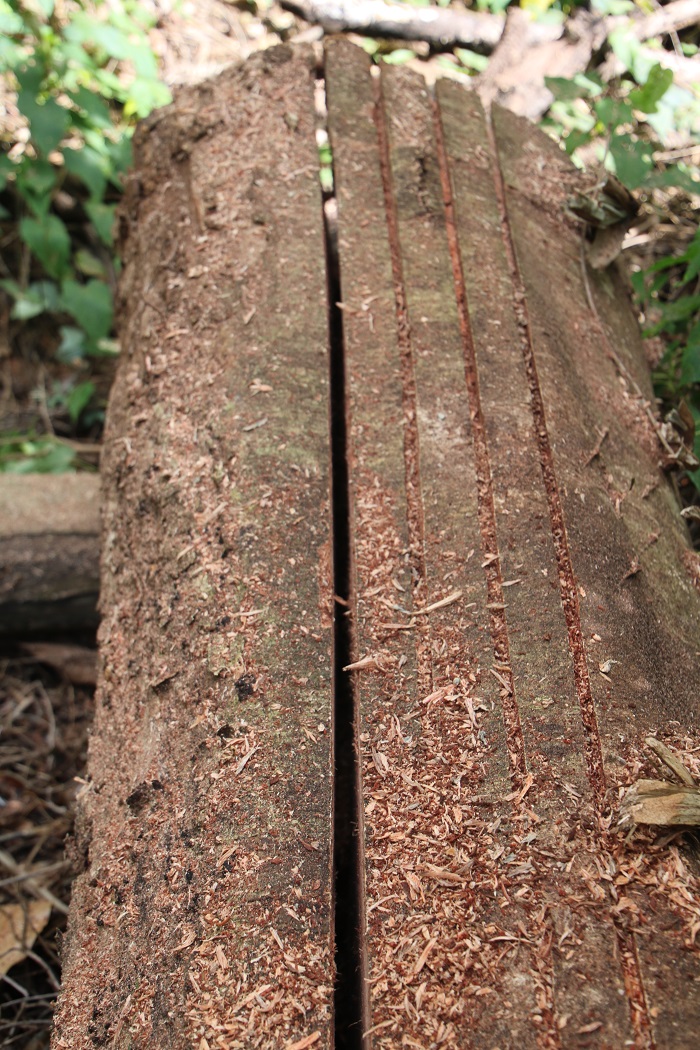 The process of cutting all the way through the log, end to end, took more than two hours and in the end he had three boards.  He paused once to resharpen his saw, a few gulps of beer and puffs.

All the time the noise of the saw was deafening but no hearing protection needed.   I suppose that to someone who uses a huge chainsaw with shorts and open toe sandals isn’t all that concerned about hearing loss.  However, after twenty years of this sort of work, he still has all of his fingers and toes.

Meanwhile a small lizard watched from a distance as Humty did his work. 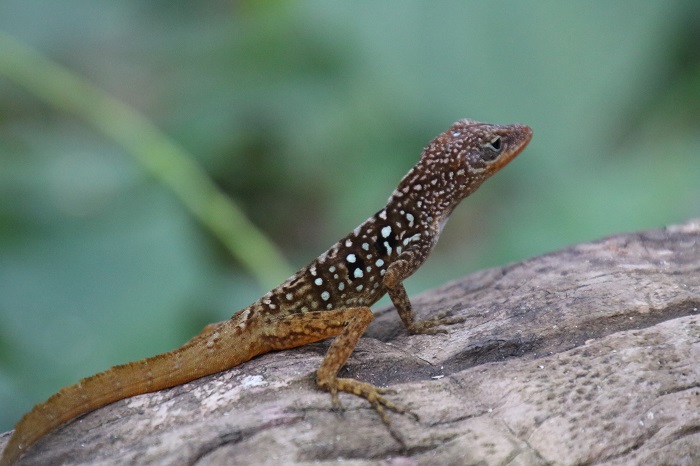 He paused from time to time to check his measurements. 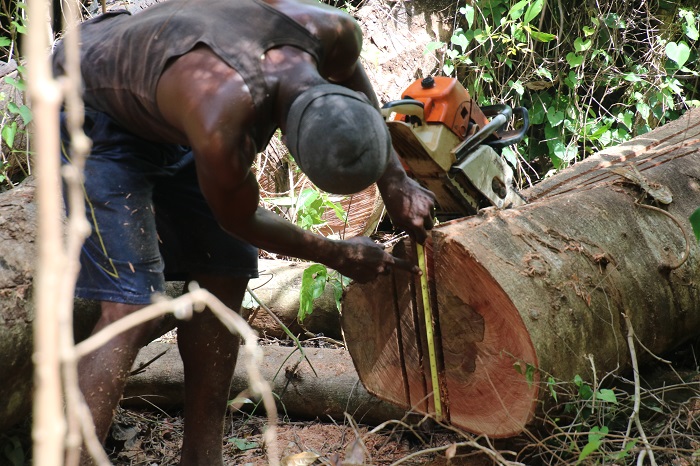 As one cut was mostly finished he moved onto the next, from left to right. 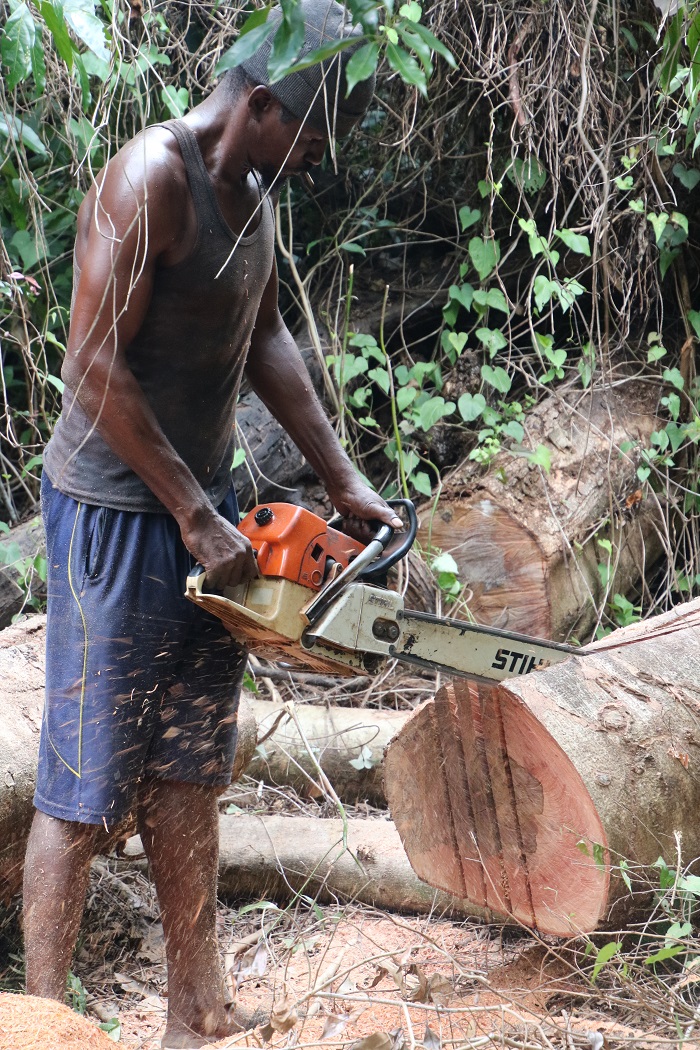 Once the four cuts were complete with only a small sliver of uncut wood on the end of each board he made the final cut, beginning on the left and the boards fell away. 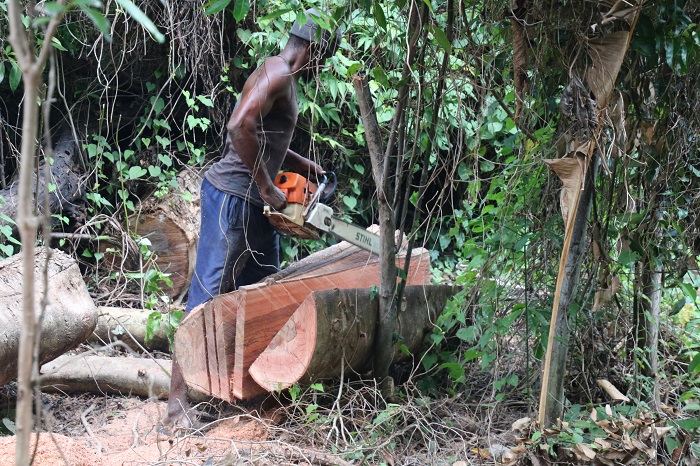 These finished cuts were remarkably consistent and all done by eye. 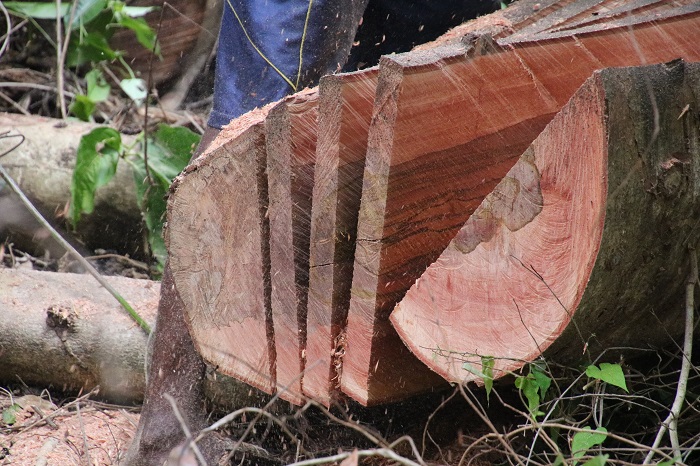 What was left of the log could have yielded a few more boards but I had asked for three so that’s what he cut. 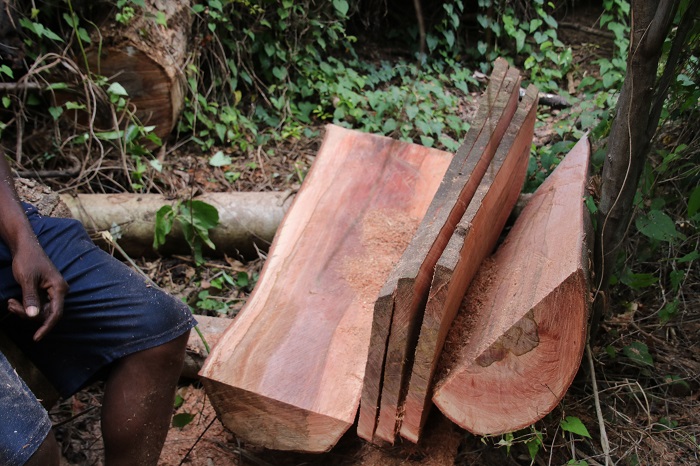 The boards have beautiful figuring. 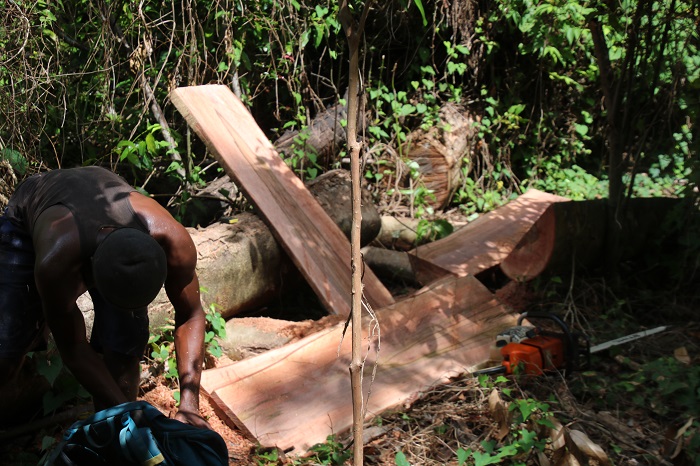 The dark markings are not water staining or rot, it’s the way the trees grow.  Notice how smooth the cuts are.  You would never know that he had just held the saw and cut them freehand. 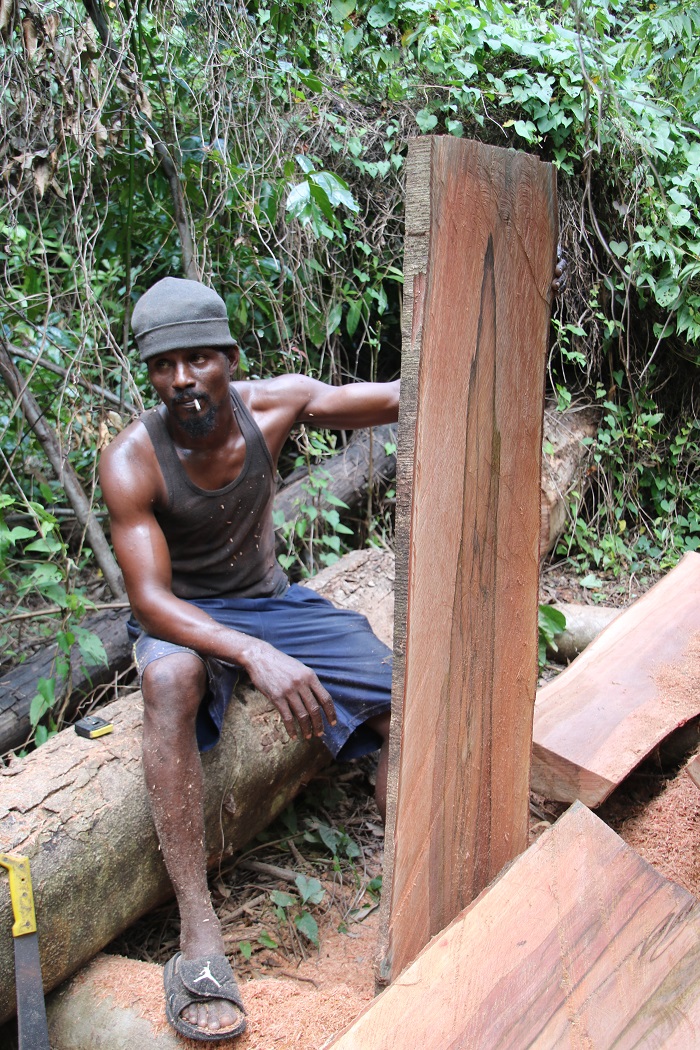 I have no idea what I will make these boards into but they are remarkable and I’ve never seen anything like it.   The wood is very dense and HEAVY. 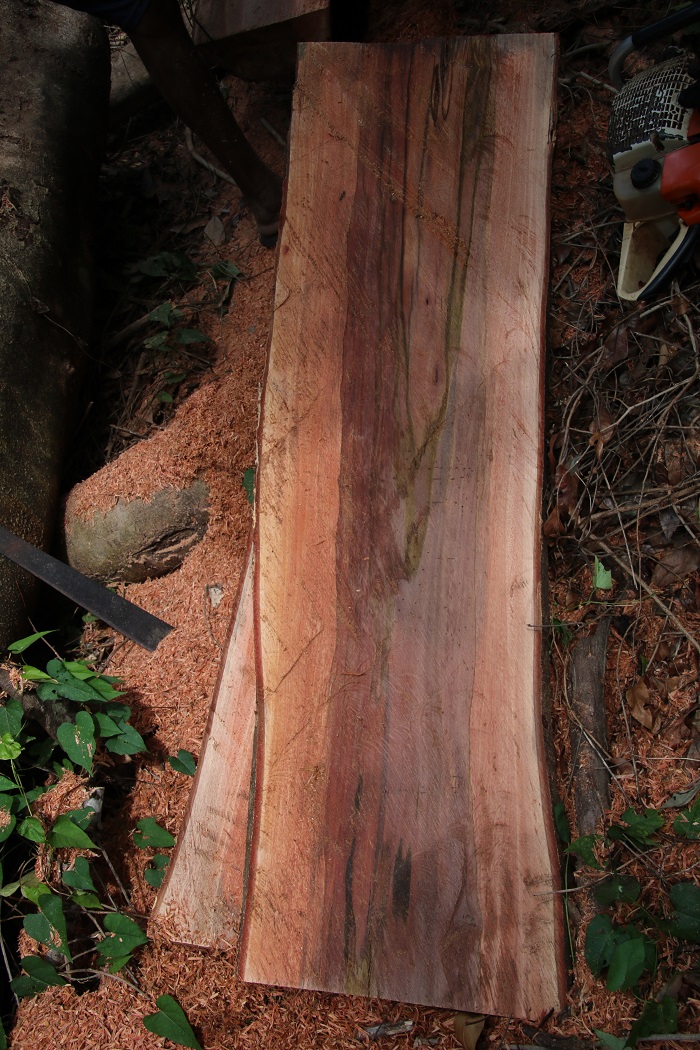 Even though the wood had fallen nearly three years ago, there was not rot but OMG, they are heavy, perhaps 70lbs each.

Humty, in spite of their weight, hoisted each board and held it over his head, with the saw in the other hand and carried them out.   He enlisted a friend to help carry the final board out. 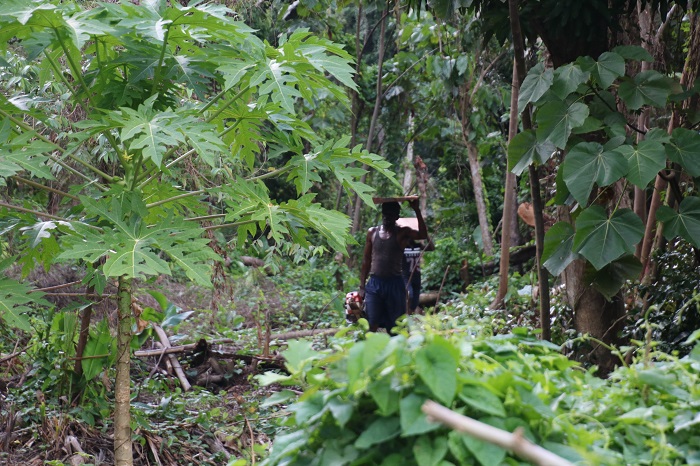 He didn’t miss a beat as he forded down into the stream and up the other side. 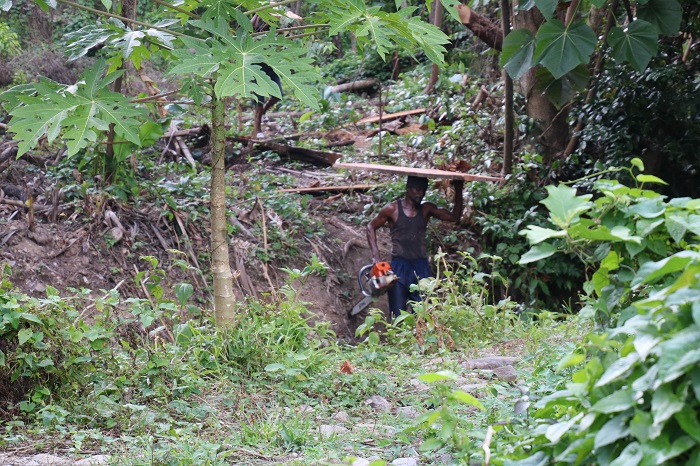 As I write this we are now in Martinique and for the time being, the boards are still at Humty’s home on the beach.  I am hoping that they will dry out a bit so that they aren’t quite so heavy and I’ll need time to think about how I am going to secure a few hundred pounds of boards down below the cockpit.  I sure don’t want them to come loose along the way as I can only imagine what sort of damage they would do if they started crashing around making a mess of my autopilot and who knows what else when the going gets rough on the trip home,  which it always does.

So there you have it, a guy named Humty, his snake, an alarming saw and don’t forget a beer to get in the mood along with a bit of ganja.

You just can’t make this stuff up.

3 responses to “Humty, his snake and a saw”