It’s a beautiful day here in Dominica with bright sun that just peeked out following a parade of rain squalls beginning overnight.  This view, and it is impressive, to say the least, was completely obscured by rain and fog until a few moments ago.

As this illustrates, In Dominica, with some parts of the island getting 300″ of ran each year, we are securely within the “islands that kiss the clouds”. 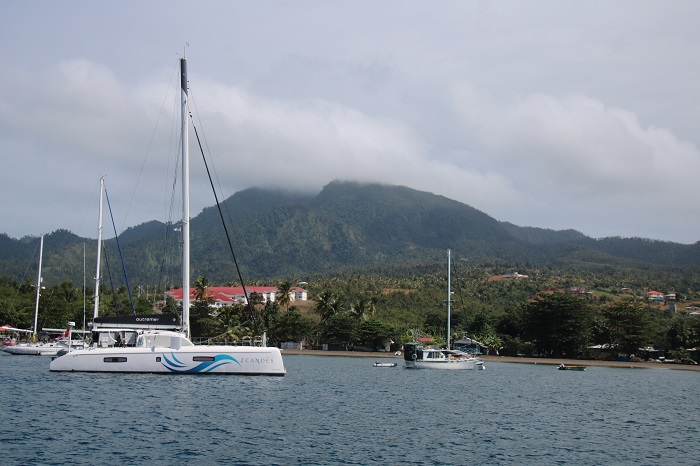 This harbor, Portsmouth Dominica, is on the very north west part of the island and while it is wide open to the west, like most harbors in the Windwards, it is wonderfully protected from the strong trade winds and waves and as the wind comes out of the east for about 99% of the time.

Dominica isn’t highly developed like so many islands with only a small tourist trade.  With the exception of cruiser ships that visit, the island only has about 600 hotel rooms as so many were wiped out in the hurricane a few years ago.

For those who visit however, the island has beautiful rain forests and we were told 365 rivers.  There are also many miles of well maintained hiking trails to explore.  It’s a beautiful country.

While this island is not on the radar of your general tourist, it is very popular with cruisers and here in Portsmouth harbor there are dozens of boats visiting at any point during the season.

I will say that the locals are very focused on cruisers and do a lot to encourage them to visit.  Years ago this was not a spot that many visited but a group of locals got together and formed PAYS, the Portsmouth Association of Yacht Security and now the harbor is one of the safest in the Caribbean.   They organize tours and twice a week host barbecue parties with all you can eat chicken and rum punch.  They also host a week long event Yachtie Appreciation Week.

Our run from Les Saintes was a VERY bumpy 25 mile run on a very close reach, with with plenty of spray flying over the decks.  Not Brenda’s favorite!

We had decided to leave come to Portsmouth as we learned that the trade winds would be peaking near 30kts for perhaps a week or longer and we, along with a half dozen other boats that we are “buddy boating” with decided that it was time to move on, so here we are.

Yesterday we spent the day ashore with a dozen of our cruiser buddies to go on a tour of the island, something that we had not done before.  It included a visit to a tiny family run chocolate factory, a hot spring as well as a swim at the bottom of a waterfall, aptly named The Emerald Pool.  I’ll be writing about all that in the next day or two.  It was a great day.  I even was able to purchase a few tropical hardwood boards cut from trees that came down in the hurricane from the owner of the chocolate factory.

We have also enjoyed time at a local restaurant run by a couple that split their time between Texas and here in Dominica.  Co-owner, Toni makes terrific rotis, a sort of Caribbean burrito with chicken and potatoes wrapped in a tortilla.  The actual recipe can vary a lot and sometimes the chicken inside includes bones and all.  I’m here to say that they were great.  No bones.

The day before we headed here a bunch of our cruiser friends met on the beach in Les Saintes for a pot luck cookout.  Everyone brought something to share.  Our contribution, purchased at one of the terrific groceries on the island, were delicate little lamb tenderloins.   Brenda made a wonderful marinade for them and they were quite a hit hot off the grill.

This is the group of cruisers that we are traveling with.  It does seem that cruisers tend to move around as a sort of flock. 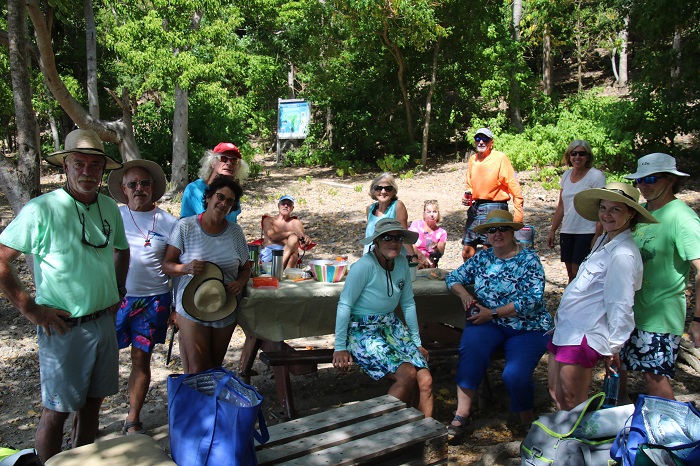 And, speaking of “flocks”, I spied this growing family when I visited the local bakery to pick up come baguettes the other day.  I can’t imagine chickens wandering around a restaurant in the US. 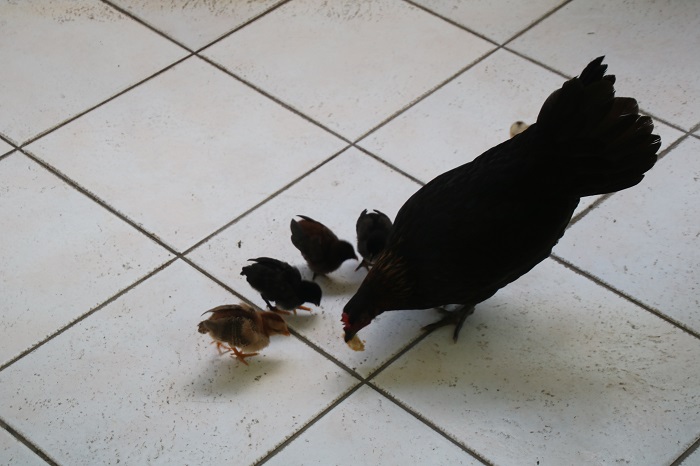 And, of course, where there a chicks, there are roosters. 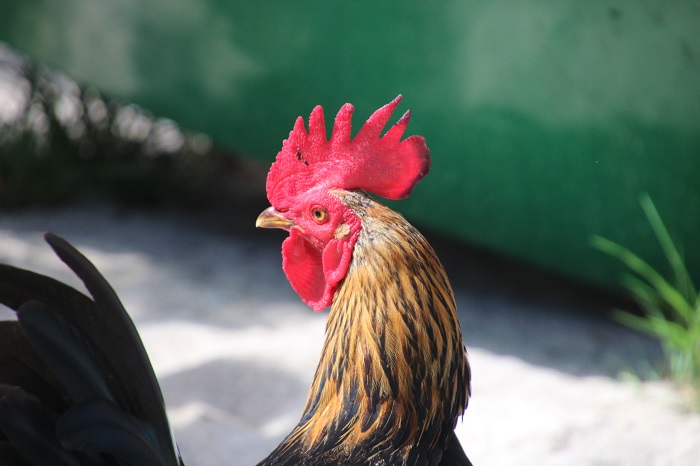 The views along the beach are very colorful  with homes and boats are painted bright, happy colors. 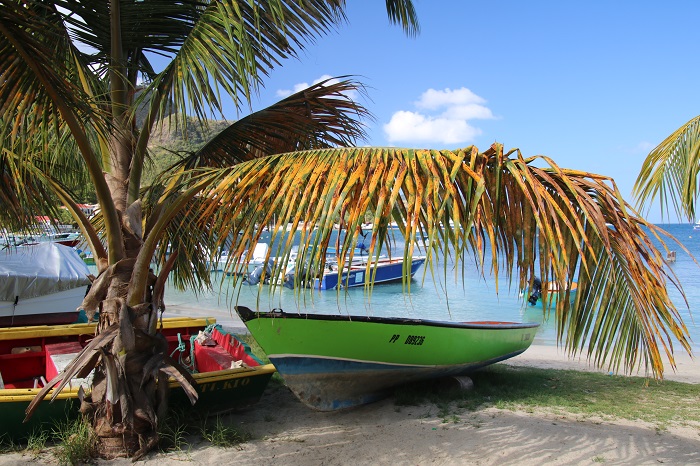 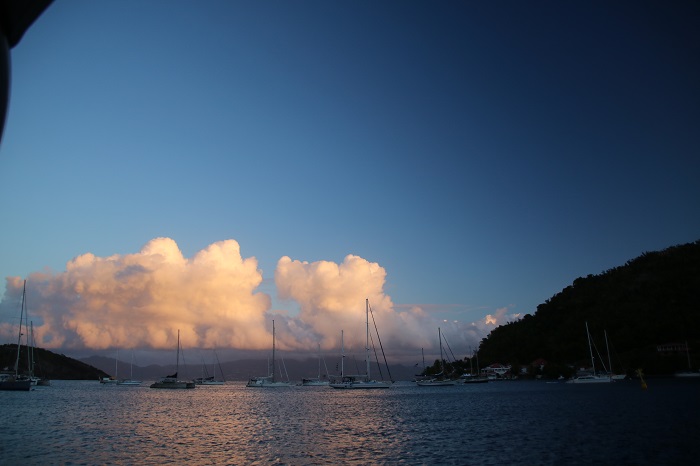 We see flags from many countries.  Do you know where this one is from?  Flags that are black and white are very rare.   I believe that only two countries have flags that are this color.   Double gold stars if you know the name of both countries or, and this is a hint, the flag of a region of a particular country. 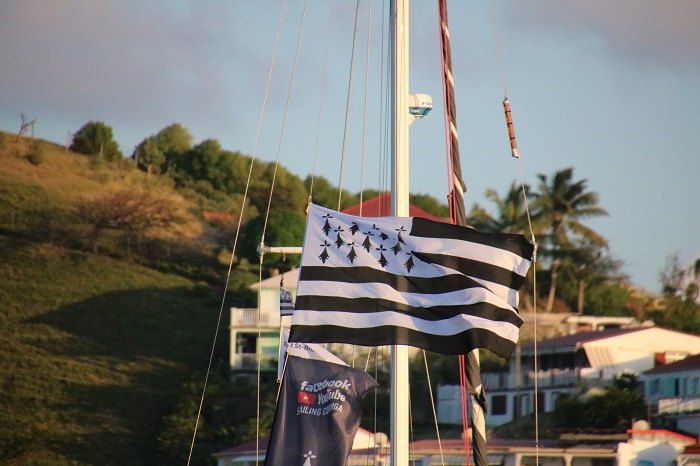 A few days ago, I went ashore to check out the tiny town here in Dominica and was impressed with the locally made baskets.  In the interest of full disclosure, I was also looking for ice cream.  Success on both counts. 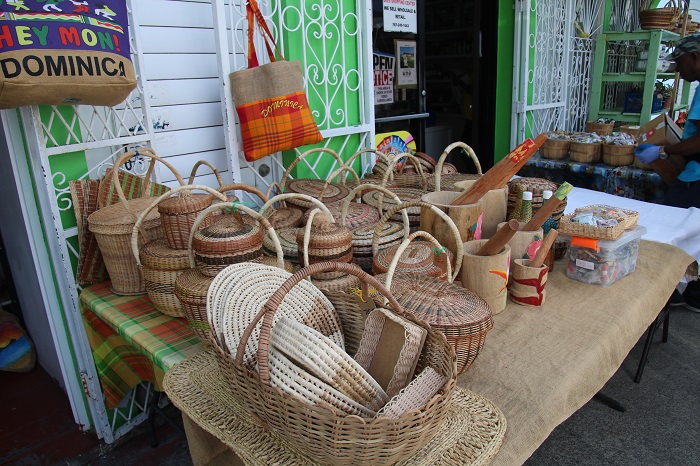 Brenda and I returned to the shop the next day.  She ended up buying an exquisitely made one at another store.  Along with all that she does, Brenda is also a very accomplished basket maker.

Brenda liked this tiny shop on the beach.  That makes at least three Brenda’s in Dominica as I ran into a fellow cruiser a few days ago also named Brenda. 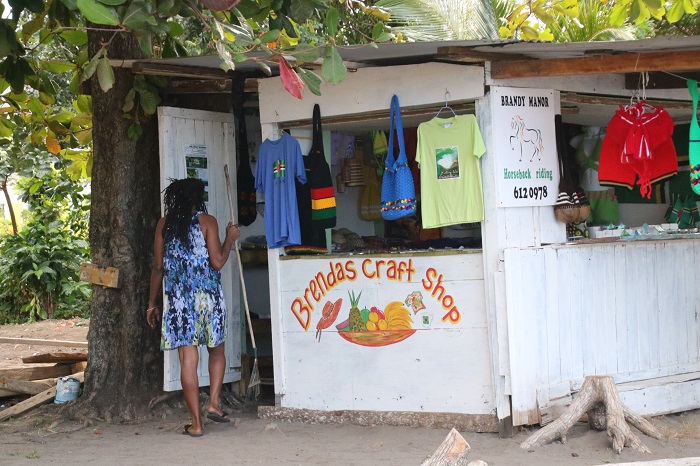 Anyway, I expect that we will be here in Dominica for at least a week the trades are up and it’s even rougher in the ocean than it was when we arrived here from Les Saintes, with seas running at nearly 10′.  When the weather router, Chris Parker, describes conditions as “very salty”, Brenda, in particular, feel that it’s best to stay put.

I guess that’s about it for now so stay tuned for more scintillating details from Pandora and her crew as we make the best of things while we are pinned down by the trades.

And, yes, it’s a beautiful day here in Dominica.

2 responses to “Pinned in Dominica.”