A walk in the woods, Guadeloupe

We are still here in Deshais, Guadeloupe and this morning were visited by a turtle that has been keeping us company over the last few days.  He’s/She’s about 18″ long. 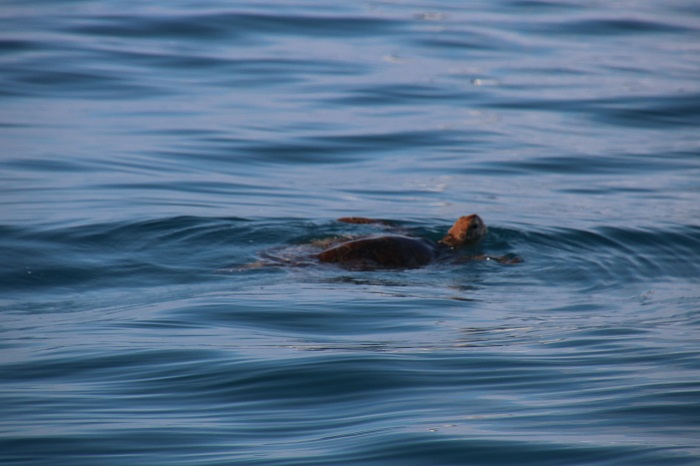 There is a bit of a swell coming into the harbor so we had a somewhat rolly night but the sun is out and it’s a beautiful day.

I am in a little cafe as I write this and spied this little heron as I came ashore. 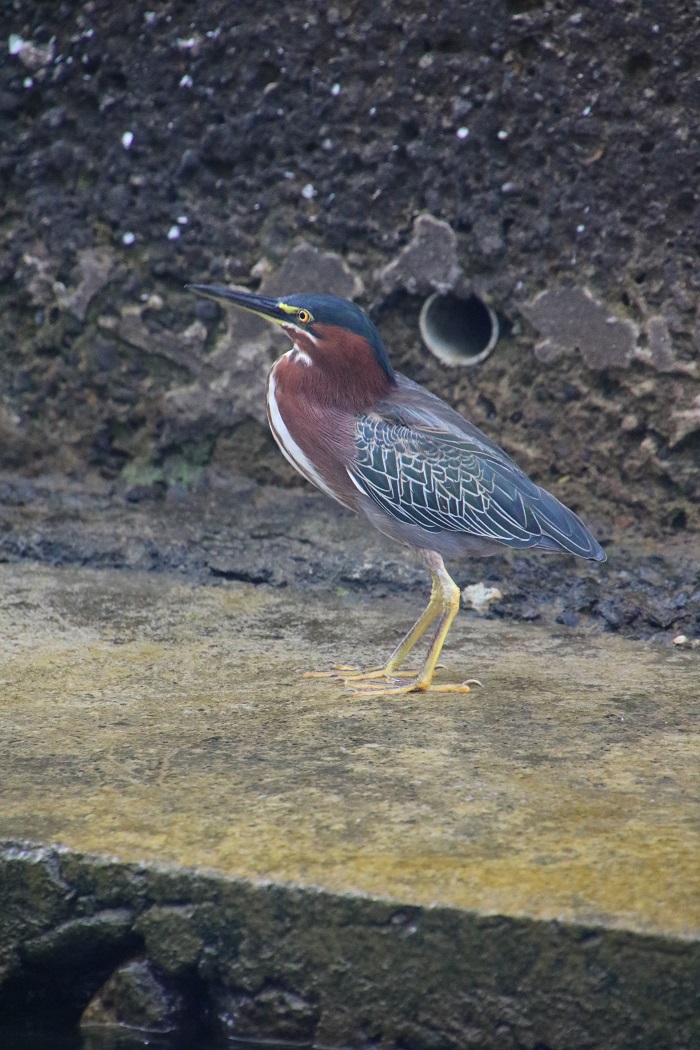 Yesterday Brenda and I rented a car with some new cruising friends and toured the island of Guadeloupe.   We had lunch in an excellent French restaurant along the way and visited a rum distillery but the highlight of the day was a hike into the rainforest to view Les Chutes de Carbet a spectacular double waterfall with a total combined vertical drop of nearly 600′.

To get there we drove up an impossibly winding narrow road with dozens of switchbacks along the way, some so narrow that two approaching cars could not pass at the same time.   Once we arrived at the entrance to the park, we noticed a number of emergency vehicles lined up.  It wasn’t until later that we saw someone being carried out on a stretcher.  She had obviously fallen somewhere on the trail.   I’ll admit that did give all of us pause and I was extra careful along the way. 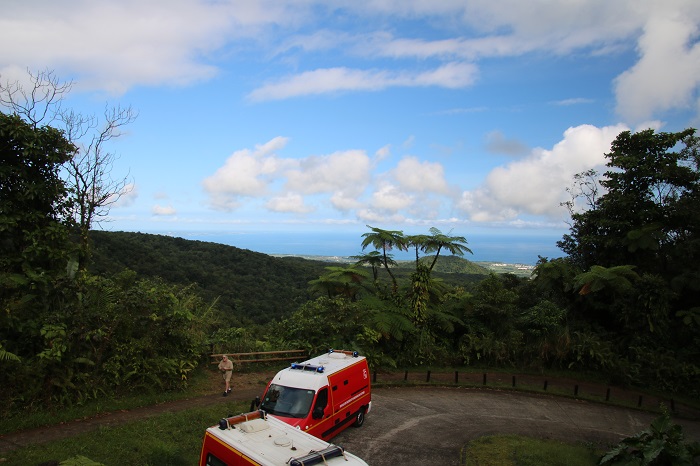 Near the parking area was an overlook to give us an idea of what we were going to see, the spectacular double falls in the distance. 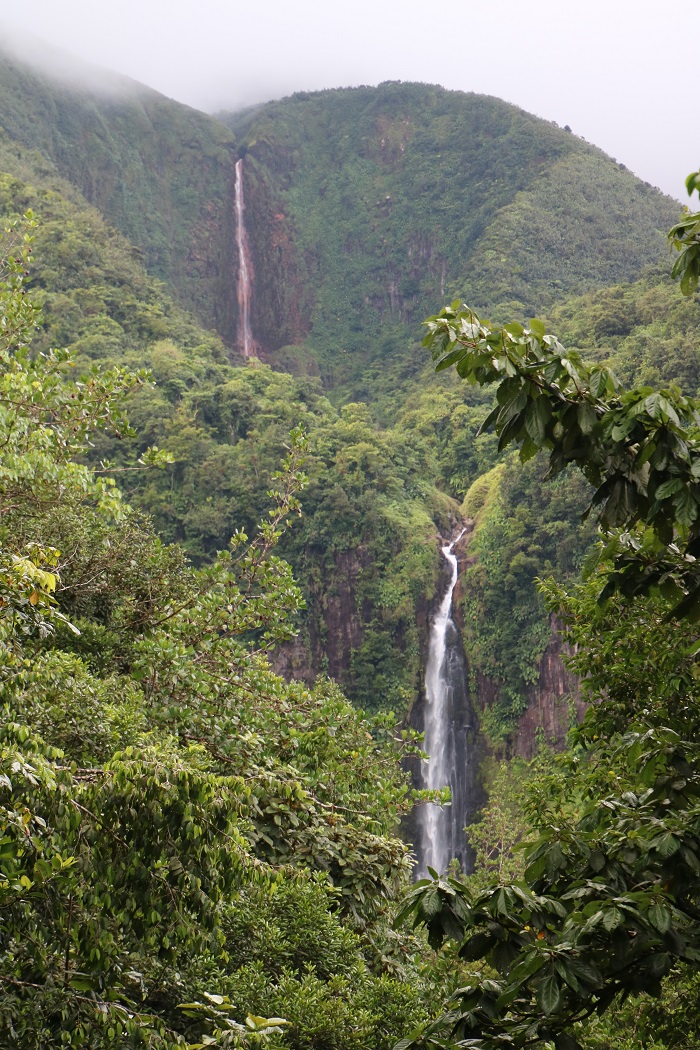 The path we took was labeled as easy and was very well maintained with pavers and wooden walkways the entire way.  However, because of the constant wet from rain and mist, it was still slippery. 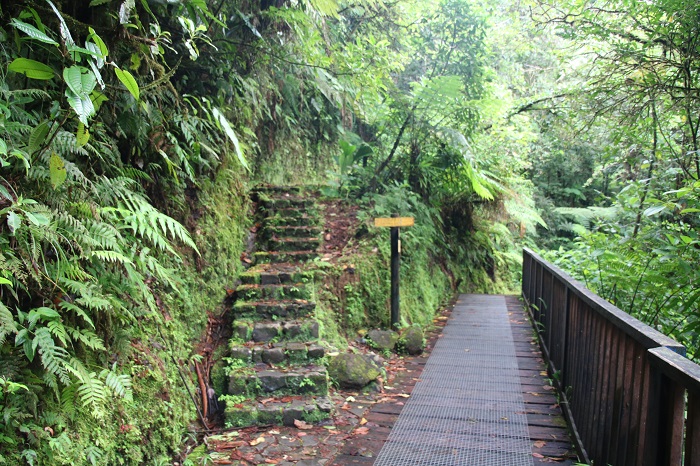 Everywhere you turned, something was growing, from tiny moss and ferns to trees hundreds of feet tall. 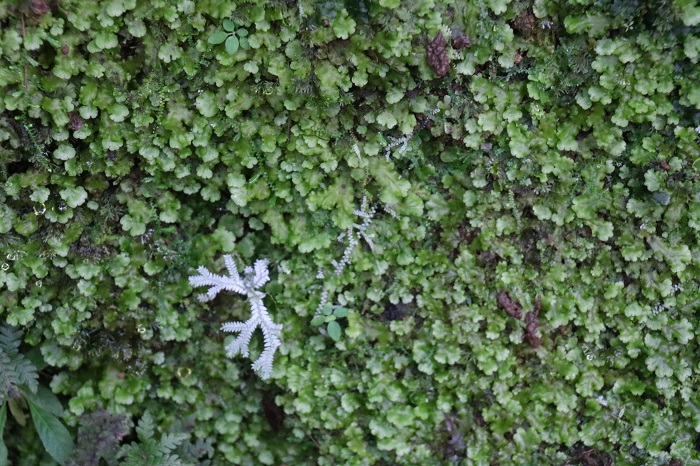 It seemed like every branch had something growing on it. 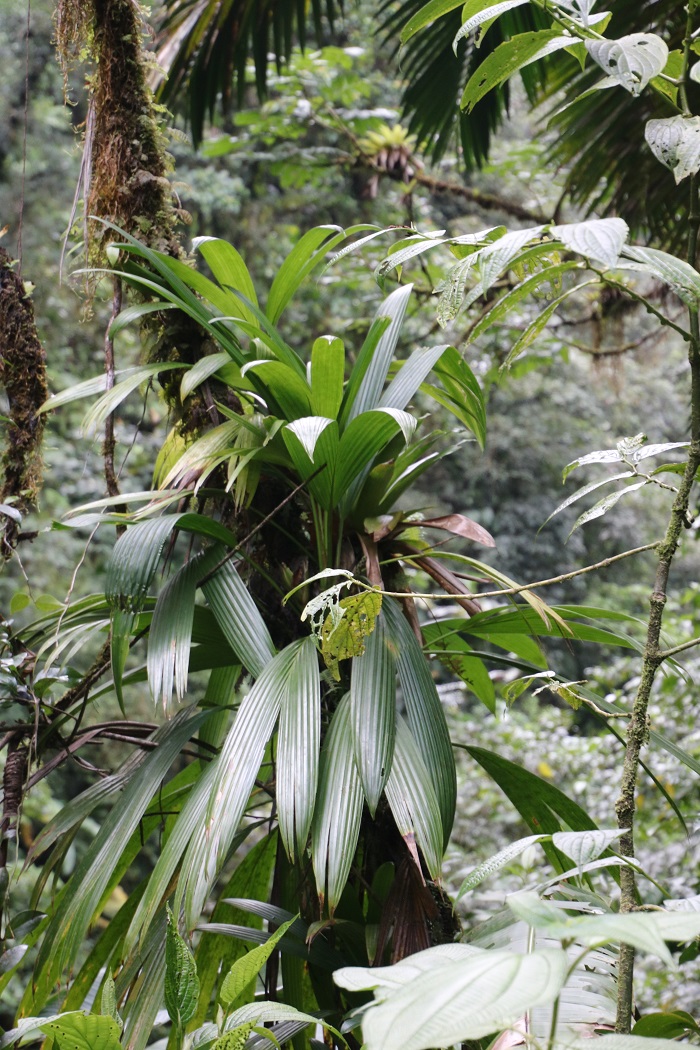 Some of the ferns were 40′ tall with fronds that stretched 8′. 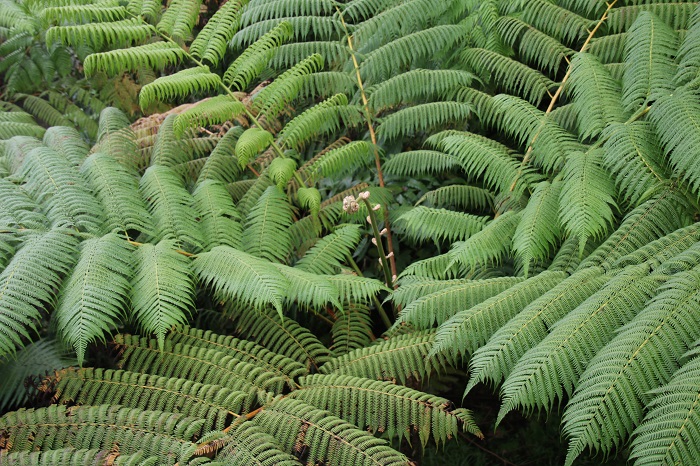 The path followed the stream up to the falls. 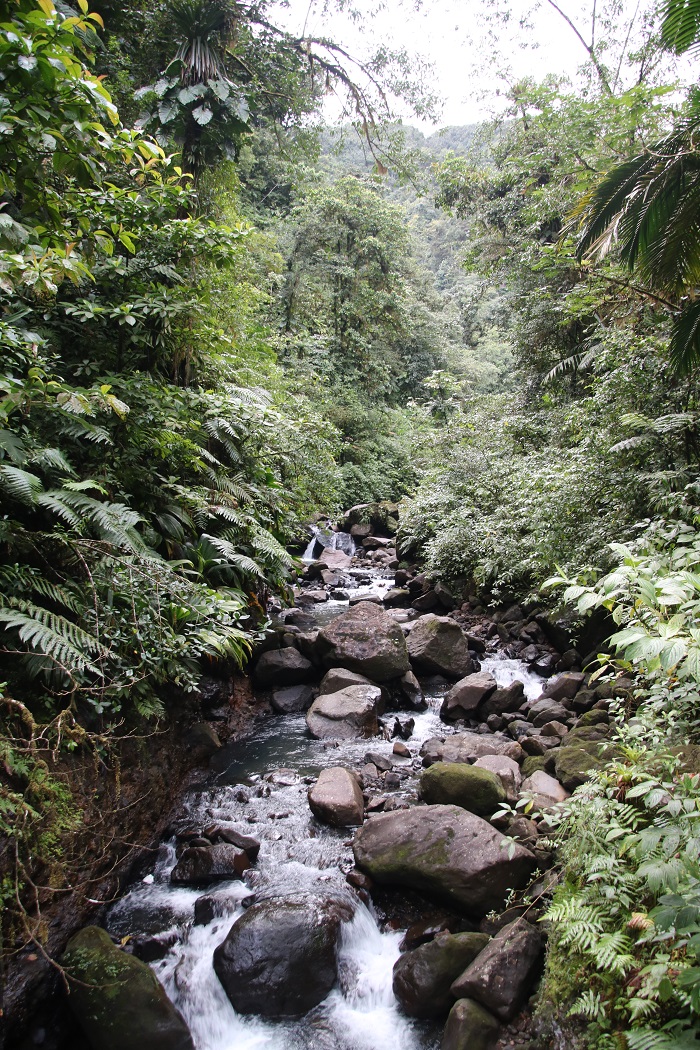 The top of the mountain, some 4,000′ tall, was shrouded in clouds and mist. 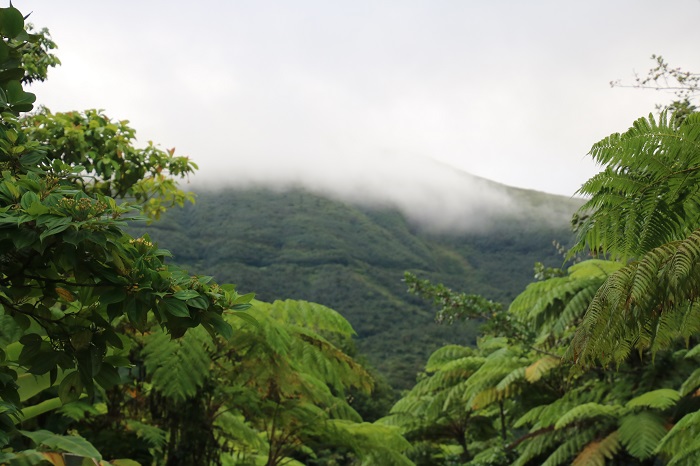 After walking up and down, down and up, we arrived at the overlook with the water crashing down from the lower falls in the distance.   What a view. 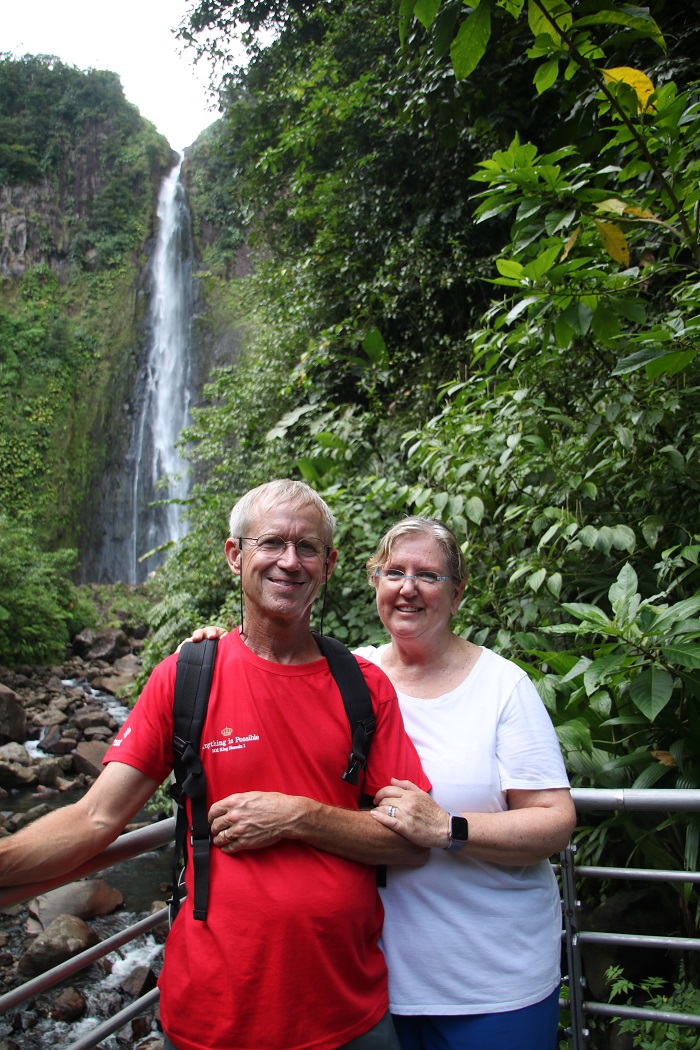 There was a little bird looking at us, perhaps hoping for a handout. 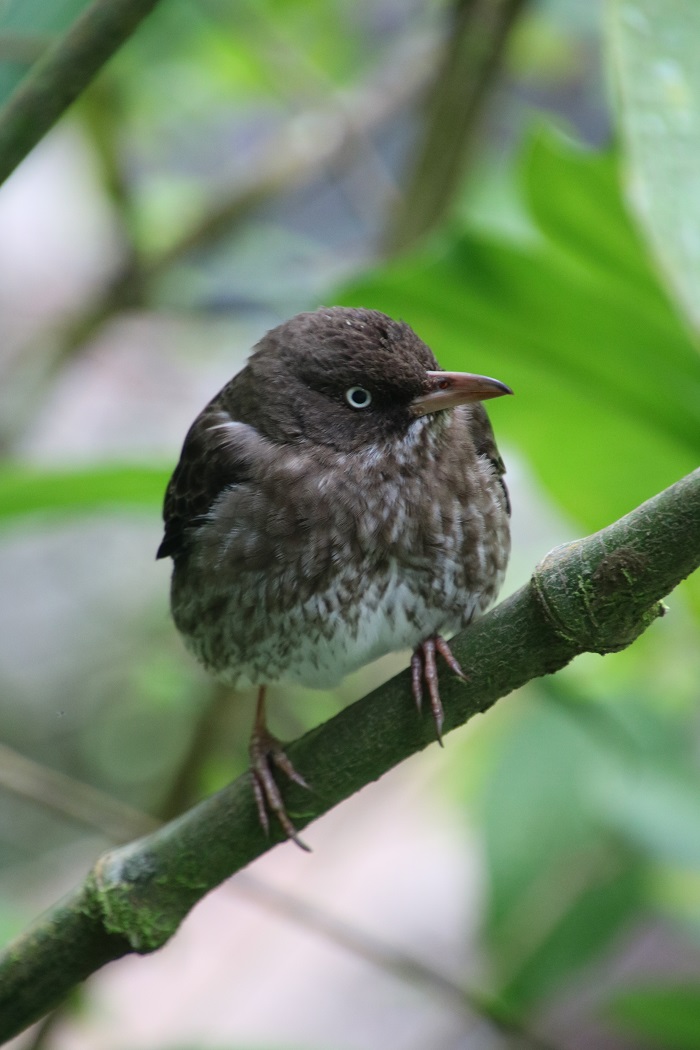 I am always on the lookout for orchids and didn’t see any.  That’s not unusual as they generally grow high up in the forest canopy, hundreds of feet up where the light is bright but hard to see from the forest floor.

However, a few days ago, I went for a short hike near the harbor and did see some vanilla orchid vines.  They were not in flower but I am pretty sure that ‘s what they are.  This particular species grows pretty close to sea level, not high up in the mountains.   The vines can grow hundreds of feet long and are the source of “vanilla beans”. 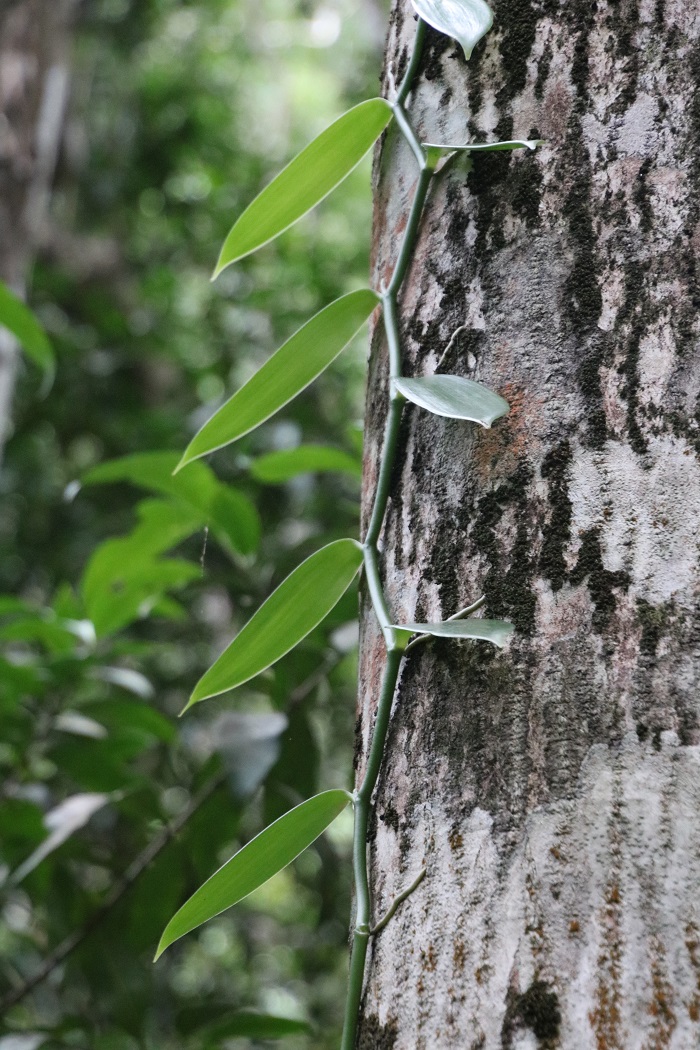 The island mountains are so steep and there is only a single road that runs around the perimeter of the island, with what seems like hundreds of switchbacks and winding curves that follow the coastline.   Driving these roads can get tiring after a while as it’s more like a slalom course where going more than 30 kph is tough.

Along the way we visited a distillery, billed as the Musee du Rhum.   It was a bit odd, I’ll admit, to be tasting their wares at 10:00 in the morning. 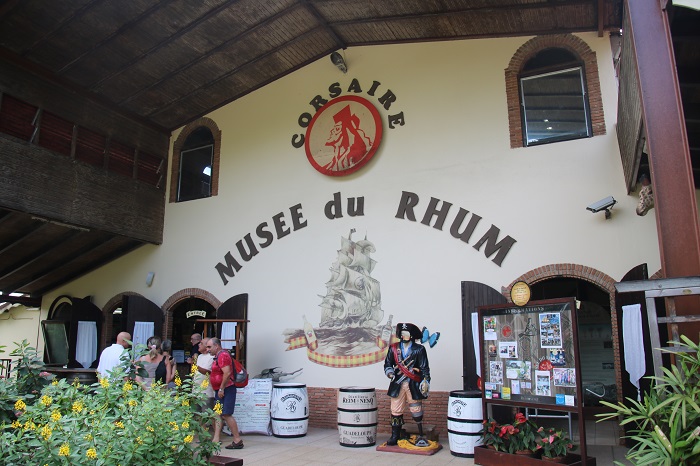 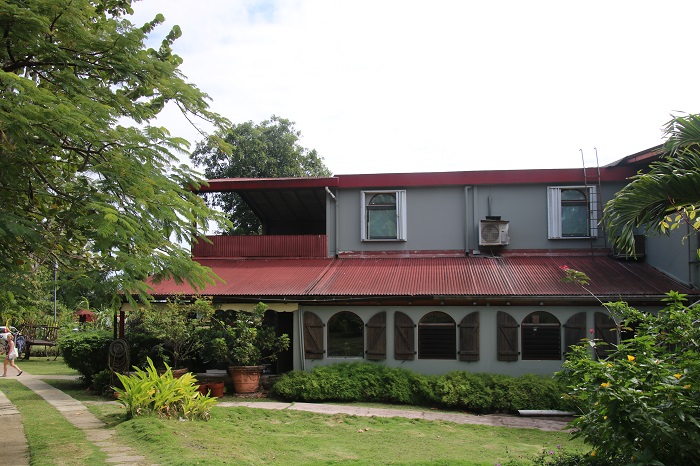 Including a mix of new and old. 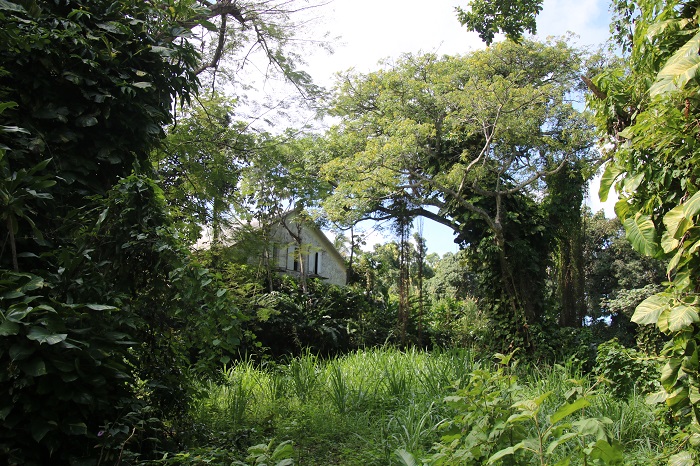 I swear that I only had a tiny taste. 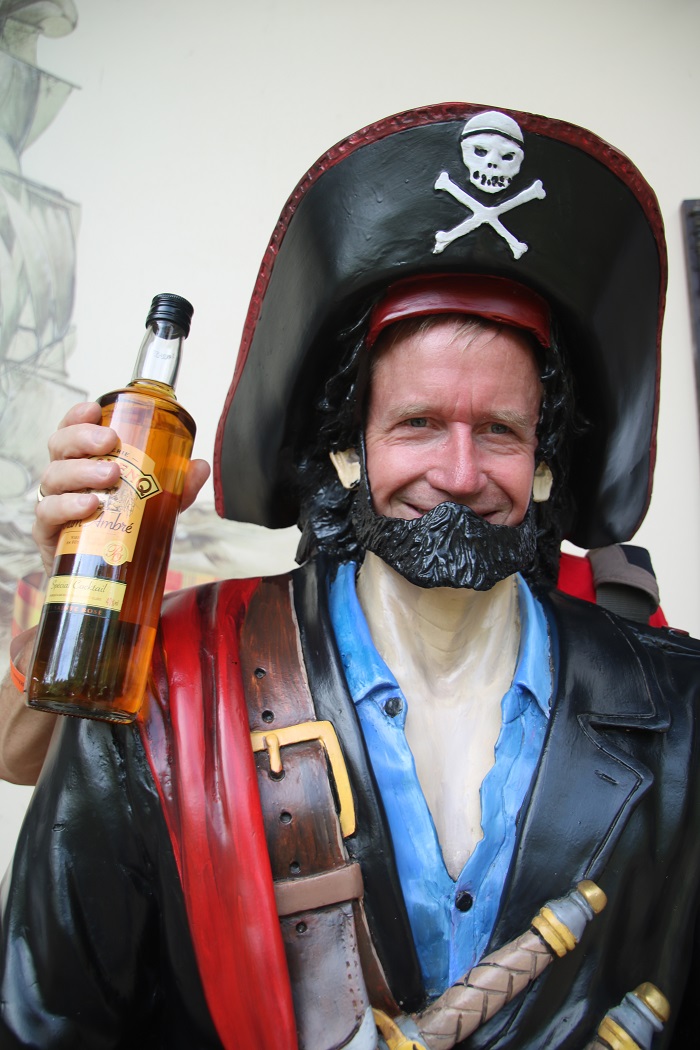 As a museum, they had a very eclectic mix of stuff in their collection.    A number of ship models including such unrelated designs as a Mississippi steamer, Christoper Columbus’s ships and, well, an odd mix. 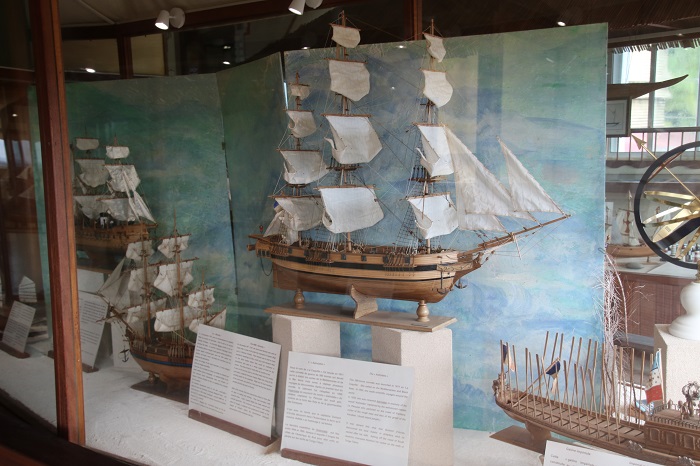 Along with some life size dinosaur models, both outside and in, they had a huge collection of bugs in frames. 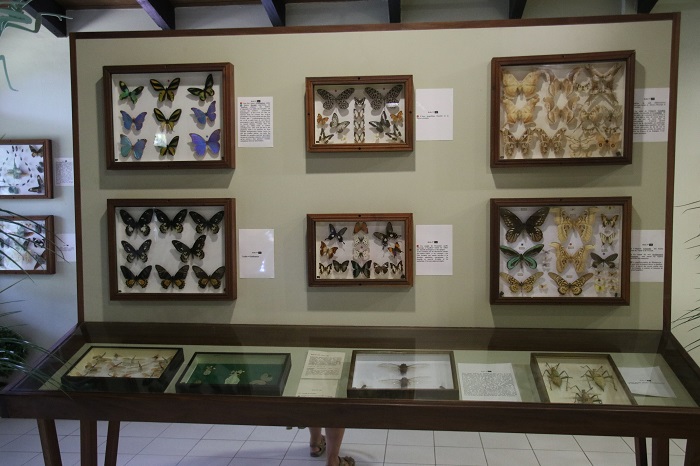 Tiny ones all lined up behind glass. 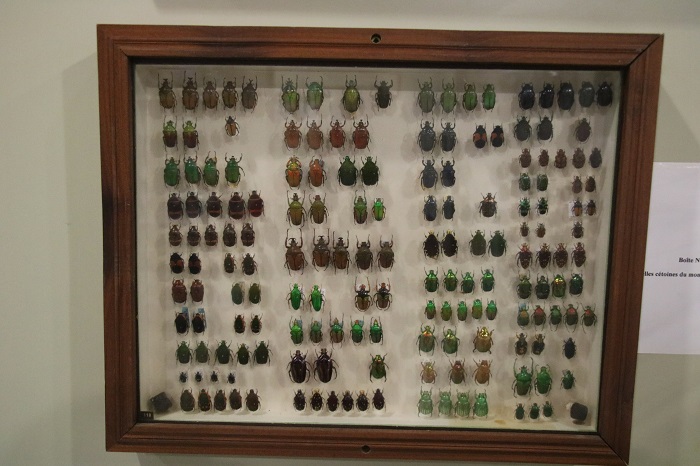 Butterflies of all kinds. 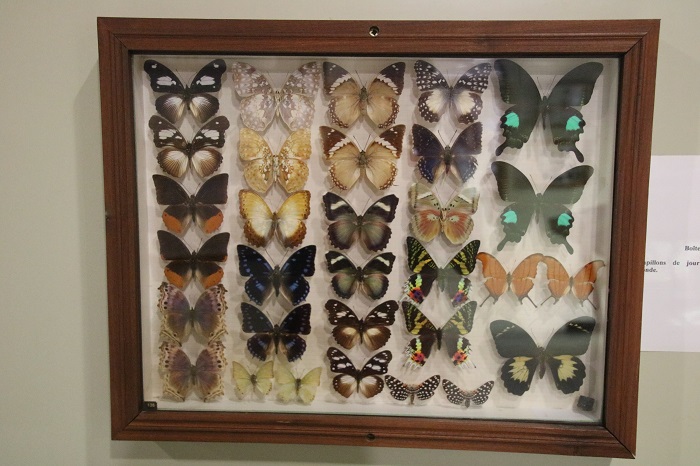 And lots that I’d hate running into at night. 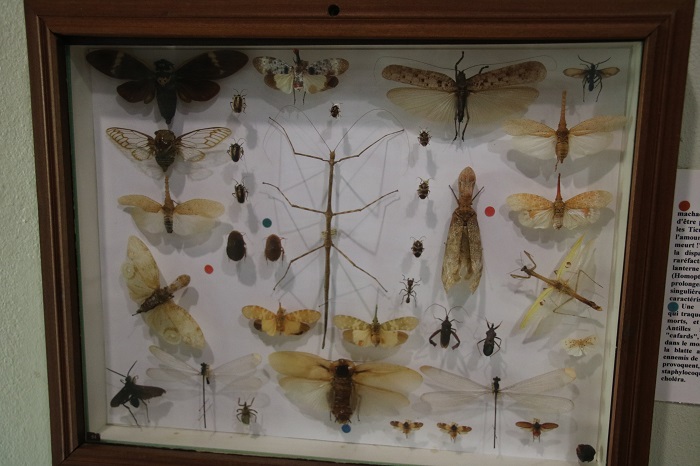 Some bigger than you’d want to imagine, about 12″ long.  To make matters worse, they are the sort that flies, I expect. 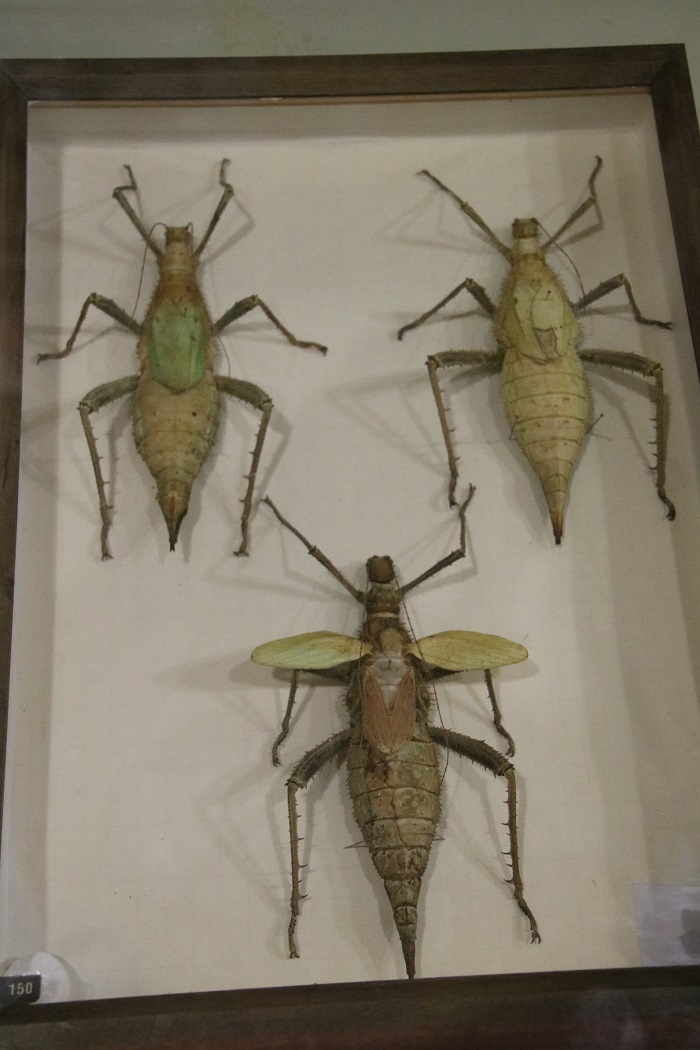 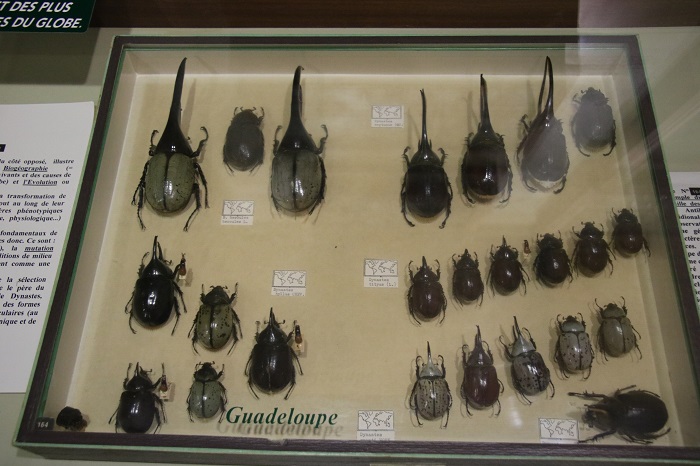 Ask yourself, what museum is complete without a collection of sand, all carefully labeled? 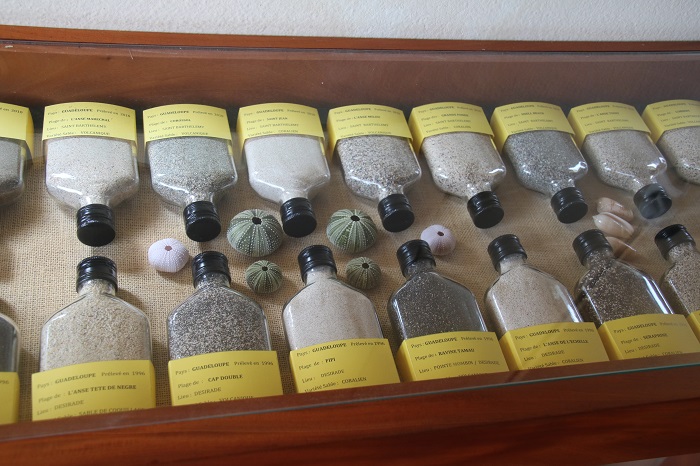 After the tour of the collection, all I could think of was someone saying “what in the world are we going to do with Dad’s collections?  Have a tag sale?  No, wait, let’s open a museum! Any better ideas?”

Anyway, it was a wonderful, if long, day and a great way to get a feel for what Guadeloupe has to offer.

And, now we have replenished our rum stores aboard Pandora.  Yum.

That and a walk in the woods.  Perfect.

One response to “A walk in the woods, Guadeloupe”