When I head out from Essex each fall to make my run to Antigua I rely on the wind to keep me moving along and when it’s dead, on comes the motor.  Even with that and all the comforts aboard Pandora, sometimes it feels, well, hard.

On our run south this year there were moments on the 11 day run that were pretty discouraging with adverse winds or no wind at all and there were times when I didn’t think that we would ever get there.

And, once we and other in the fleet arrived here in Antigua we were pretty proud of ourselves, doing something that most sailors never do, a run of 1,500 miles in a small boat.

However, there are some that are driven to do things the REALLY HARD WAY and those teams that compete in the Talisker Whisky Atlantic Challange rowing race from the Canary Islands to Antigua have elevated “hard” to another level.

These hearty souls, and there are over 30 teams this year, row the entire 3,000 miles from the Canary islands all the way here to English Harbor Antigua, a really long way.

The teams that left the Canary Islands back in early December have begun arriving in English Harbor after weeks at sea and it’s clearly been cause for celebration as they step on land for the first time after so much time at sea.  The crowd, friends and family are on hand to welcome them and what a welcome it has been.

Yesterday, I was on hand to see several of the crews come into the harbor, serenaded by horns from the nearby mega-yachts and onlookers cheering them into the harbor. 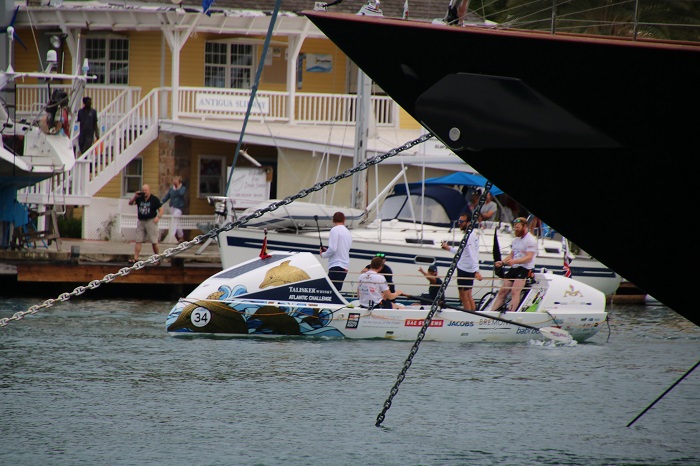 The guys on this boat, and there were four aboard, really looked excited to be here. 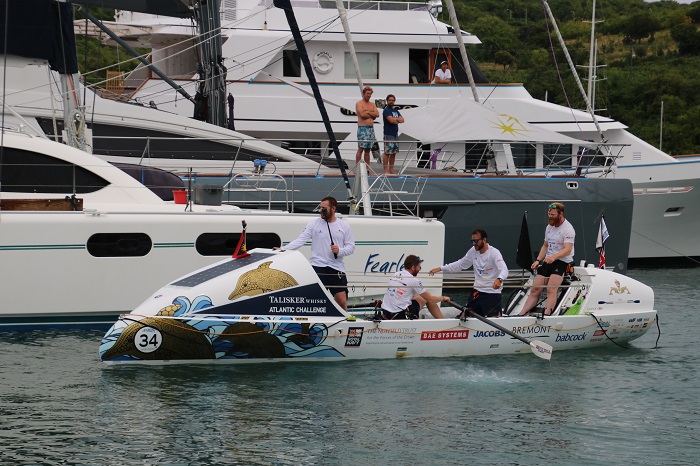 A few days ago, a three man team arrived, brothers.   It was quite moving to see them greeted by family and friends. 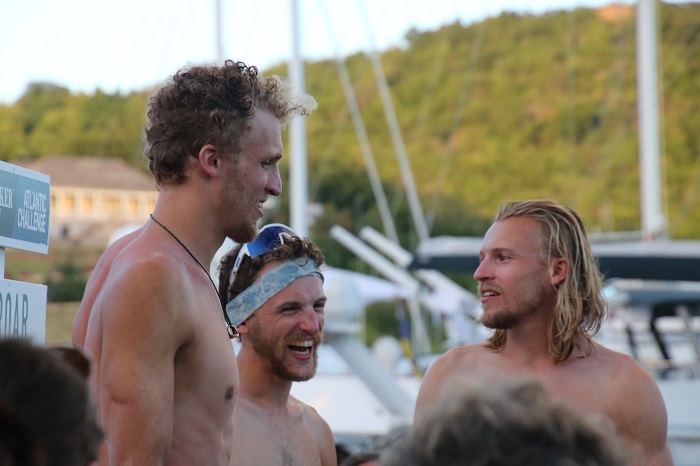 And there were speeches all around.   They were justifiably proud of what they had accomplished.   The MC asked them what the most memorable moment was on the trip and they talked about how a butterfly flew by their boat, following a gale, more than 1,500 miles from anything. 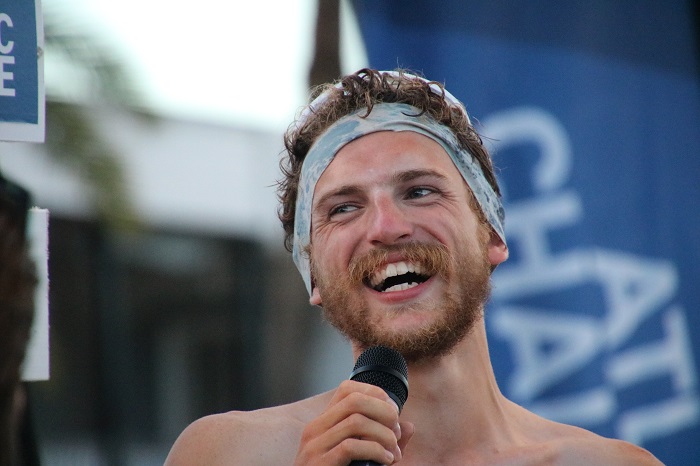 We have had birds land on board Pandora many times, often more than 500 miles from shore,.  Amazing stamina for a tiny insect, flying so far.

A little later, another boat, this time, a two man team, arrived.   They came into view as they neared the dock. 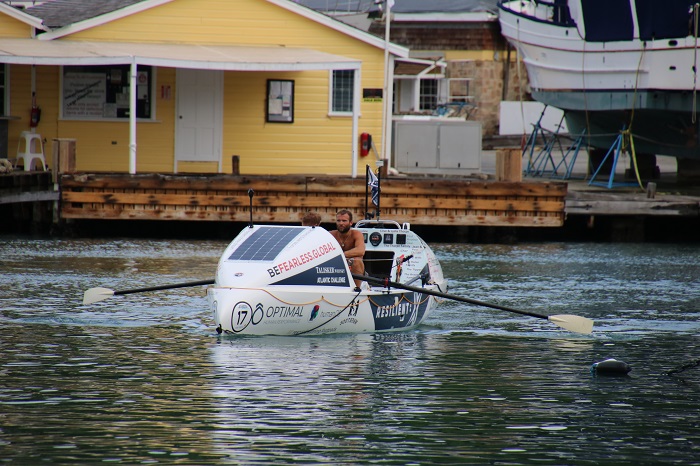 I can only imagine  how emotional it must have been for them to arrive after so long at sea and under such tough conditions. 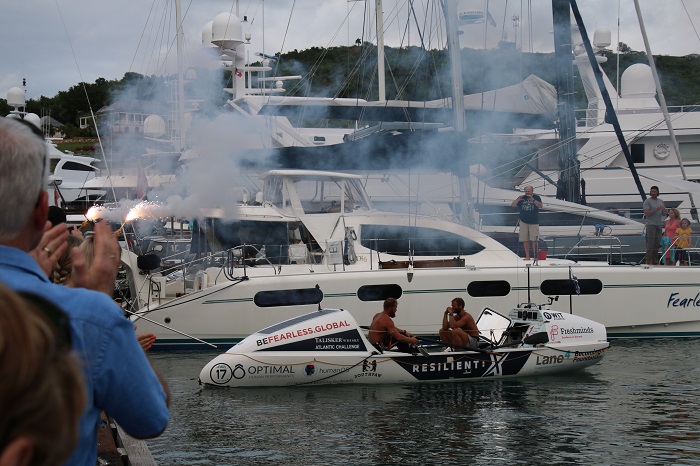 These guys were clearly happy with their accomplishment.  I wonder if they were this “buff” at the beginning of their trip.  Probably, but now “super buff” and very happy to be “home”. 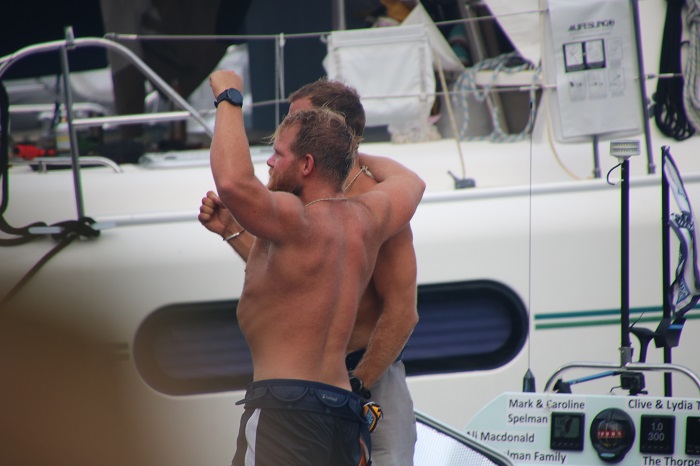 Seeing the teams greet family was quite moving.  Most were overcome by emotion as soon as they stepped on the dock,  reunited with loved ones, wives and babies that they had not seen for months. 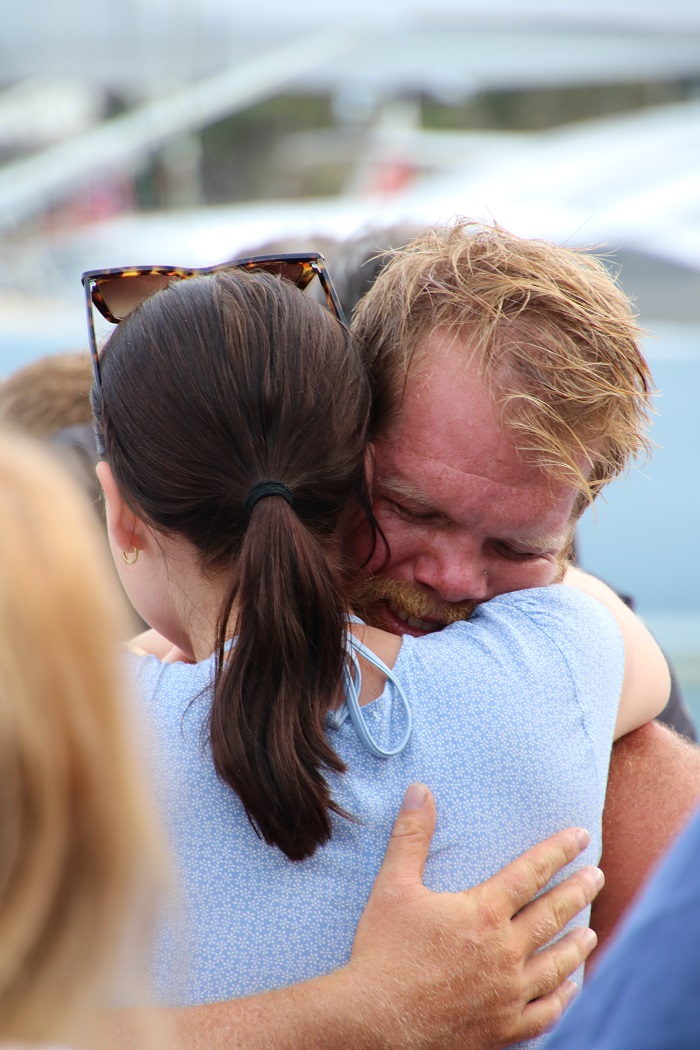 Every moment of each team’s arrival was captured from every angle. 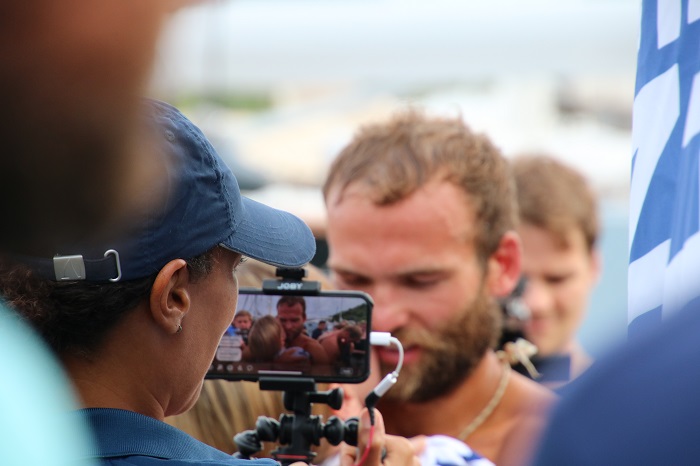 These boats are all nearly identical, only longer or shorter depending on the number of rowing stations.    I am told that some of the boats are shipped home after the race and some sold here in Antigua.  I doubt that they are used more than once by many individual teams.  “Hey guys, that was fun, wana row back?”

These are pretty high tech boats but they still have to be rowed, and rowed and rowed… 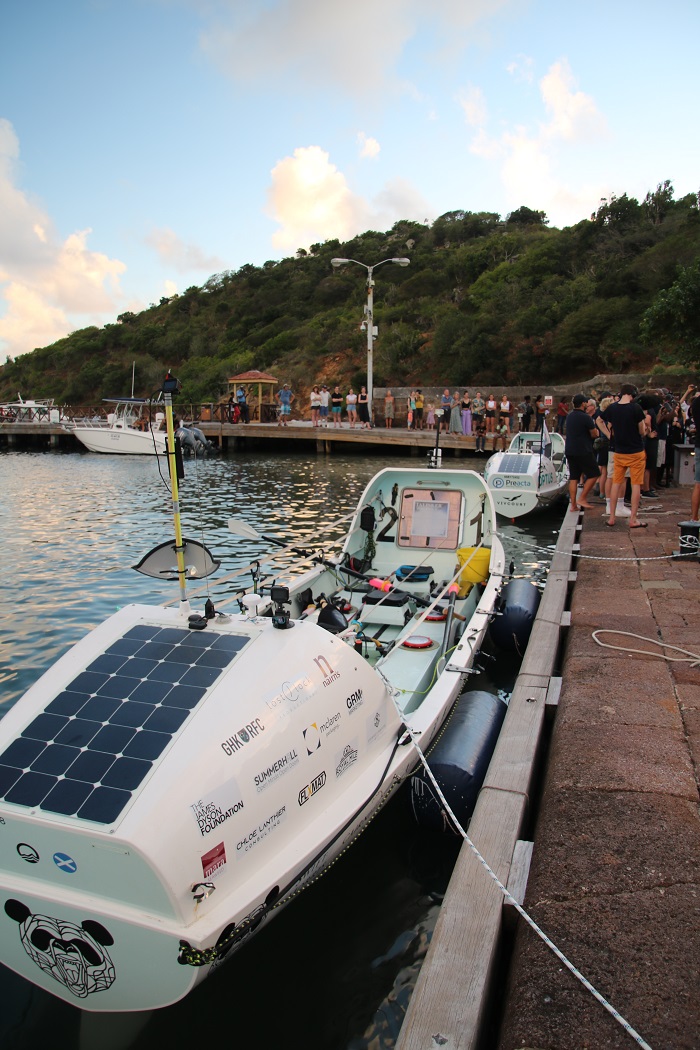 According to the official site, some facts…

Ok, so this is the course.  Looks simple enough.   Not… 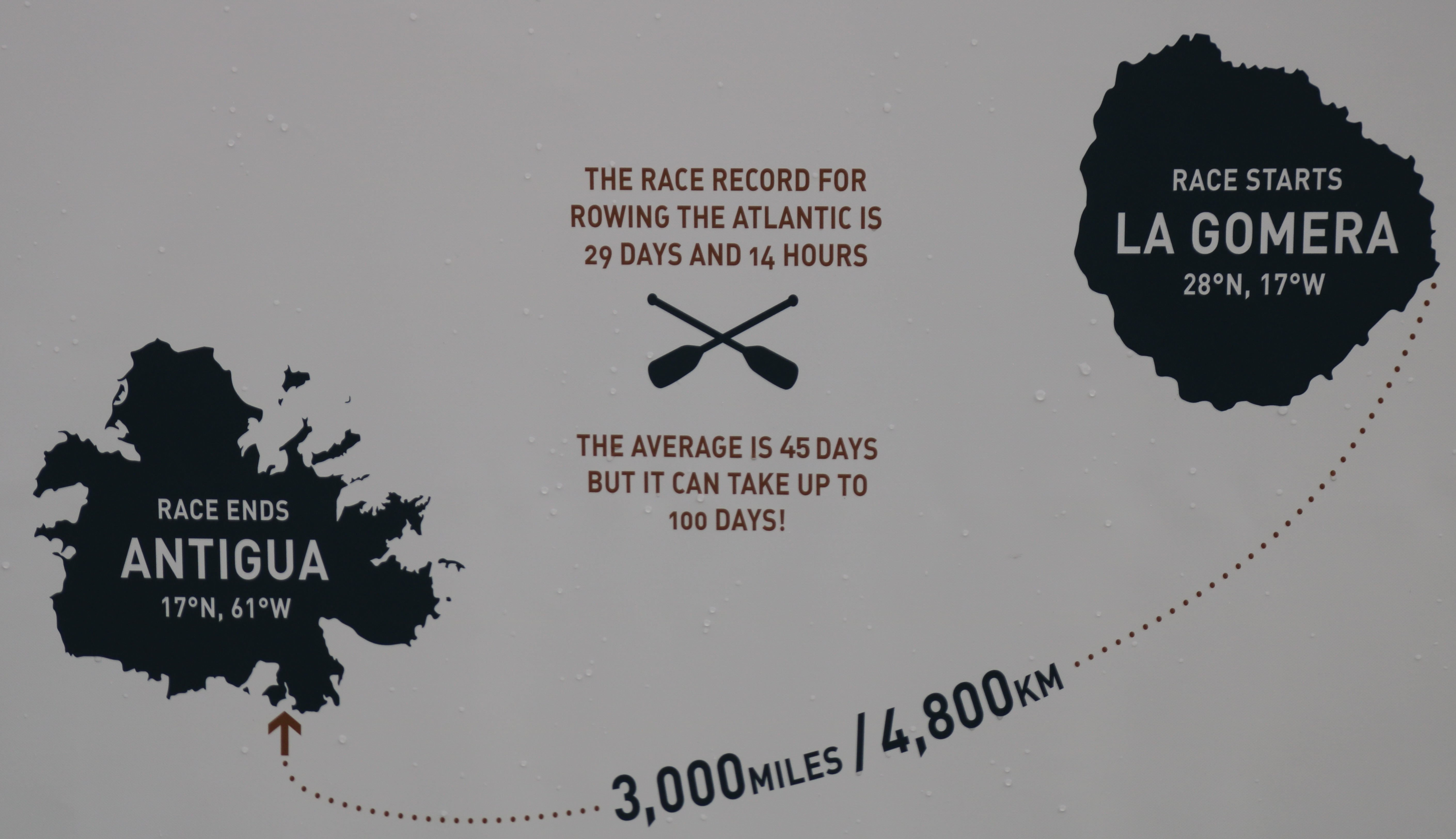 This short video gives a good feel for what the arrival was like and highlights from some of the races.  There is no doubt about it, this is indeed “The Worlds Toughest Row”.

Nope, not for me and surely not Brenda.  Imagine that one, will you?

We will just stick with this view from Pandora’s cozy cockpit.   How many rainbows can you see in a single day? 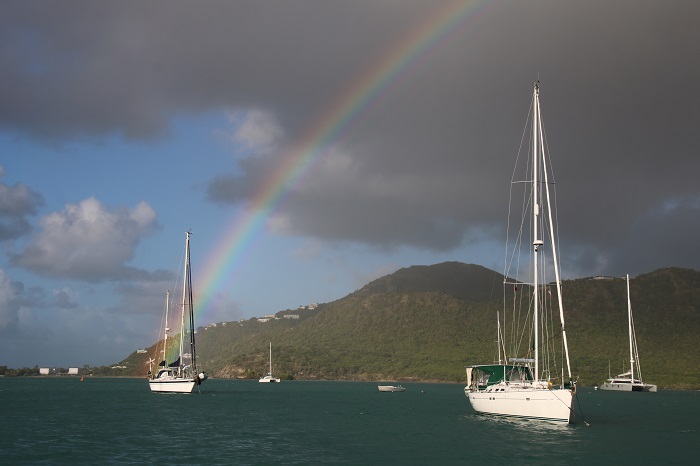 Come to Antigua and find out for yourself.

Oh yeah, the fridge is stable for now and a new compressor is on order.  I expect to have it by mid February.  Hope the old one doesn’t finally give up the ghost.

Off to Guadeloupe in a few days with friends.

3 responses to “The world’s toughest row.”