Break Out Another Thousand

Some say that a boat is nothing more than a “hole in the water into which you pour money”.  Or, perhaps to put it another way, “Break Out Another Thousand”.

Another basic truth is that the worse thing you can do to a boat is to not use it.  The longer it sits, the more stuff that doesn’t work when you “turn it on” again.

I’d also say that when I make long passages that lots of stuff breaks.  So there you have it, don’t use the boat and stuff breaks and use it and, well, stuff breaks.

Leaving Pandora for 5 weeks, while a great idea as we had a wonderful time visiting family, has made for a bit of a stressful “homecoming”, with a litany of stuff that now needs to be fixed.

Starter battery.   I pulled out the engine start battery last spring to have it load tested to be sure that it was OK and it was declared fine.  However, after sitting on the mooring for a month, nothing happened when I turned over the key.  It took me several hours to diagnose the problem as the voltage showed at a full 12.5 or better. However, after exhausting every other explanation, I suddenly remembered that I had to test it with a load to tell and I had Brenda engage the starter with the key, and discovered that it read only 6V while the starter was drawing power.  Oops, Dead Battery!  New battery problem solved.  Wasn’t that easy?

I’m still messing with the mainsail which was damaged on the way south and it’s back aboard Pandora but we are still ironing out some of the finer details which should be resolved today.

The best thing that Pandora tossed our way while we were away was that the refrigeration compressor has developed some major problems and while it’s still working, it’s drawing huge amounts of power when it first starts up and is making a lot of noise so I feel pressure to fix the problem before it finally gives up the ghost for good, or bad, as it were.  Imagine a G&T without ice.  Perish the thought!

I have had some tech folks aboard and now know that the bearings in the compressor are going bad which is why it draws so much power and is so loud.   I am hoping that I will be able to do a swap out of the compressor and still use the holding plates and electronics to run both the fridge and freezer.  I still think that’s possible but the details will become clear in the next few days, I hope.  For sure, B.O.A.T. will continue be the word of the day.

And, there is always the pain of ongoing maintenance to keep me on my toes.  After 5 weeks on a mooring in English Harbor, Pandora was sporting quite a “community” of little creatures growing on her hull, a healthy mix of slime and gunk that took me about 90 minutes to rub off.  It was amusing to see all the reef fish that hovered around for a snack while I scraped the hull.  Good news!  After all that exertion I was pretty sure that I burned off enough calories to treat myself to a coconut ice cream, a full half pint.  Of course, I had to eat it all at once as it was melting in the tropical heat, right?

And, there are always little mysteries to contend with, like why my wind instruments didn’t work when I turned them back on the other day and now they do.  Go figure.

Along with the many cruising boats anchored in the harbor, I always enjoy watching the comings and goings of the MEGA Yachts and there are plenty of them here, that’s for sure.  And, in spite of the MEGA-DEEP pockets that the owners have, I am sure that even they have moments when they say WOW! that was expensive, B.O.A.H.T, Break out another hundred thousand.

And, speaking of the big kids, this is the view from Pandora of the marinas.   Perhaps B.O.A.M.  Break out another million indeed!  Note the three masted schooner on the right in the picture below.  As a point of scale, the motor yachts to her left are each well over 100′ long. 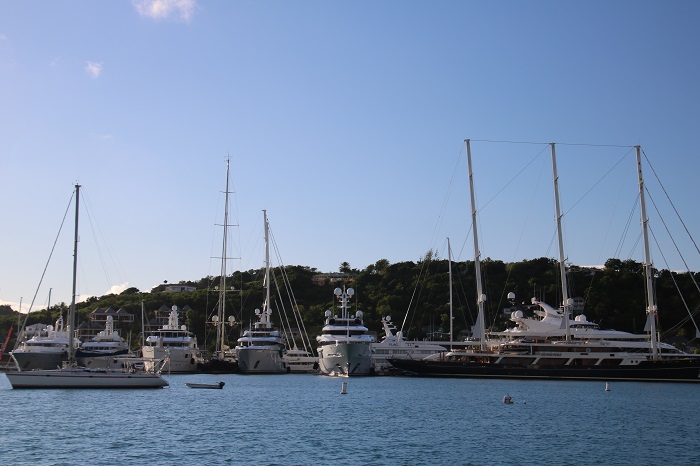 She is EOS, one of the largest sailing yachts in the world, at over 300′.   She’s so large that they had to bring her into the harbor backwards, in the dark, because she is too large to turn around in the basin.   She’s owned by Barry Diller, creator of Fox News and his wife, fashion designer Diane von Furstenburg.  Talk about a power couple.  B.O.A.M..

Interestingly, here in the same harbor, are Athena and Maltese Falcon, two other boats in the list of largest sailing yachts.   And, the good news for you is that both Athena and the Falcon are available for charter.  All you have to do is B.O.A.H.M.A.L. Break Out A Half Million At Least, and one of these can be yours, well yours for a week anyway…

Sorry, but Barry and Diane don’t charter EOS, the Power Couple that they are.  Interestingly, when EOS was launched, unlike most other megayachts that are written about extensively, she was not featured in any megayacht magazines so nobody really knows what she looks like inside.  Anyone that works on one of these yachts, or is involved in their construction, generally has to sign a Non Disclosure document.

In the other mega marina, is a yacht, along with Athena, that sports her own helicopter.   B.O.M.M.A.M, Break Out Many Millions And Millions… 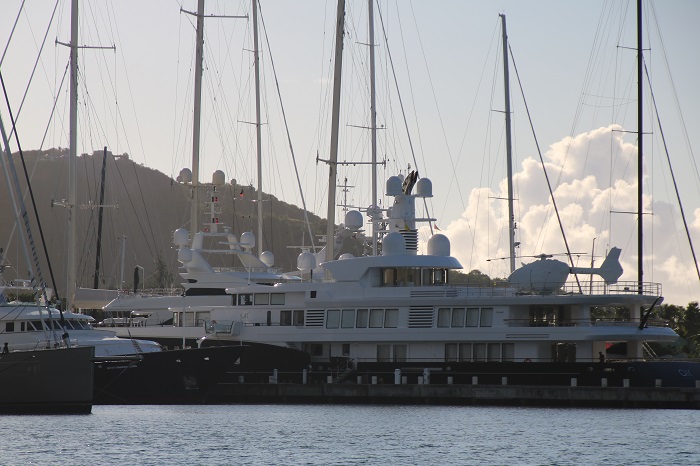 I guess that the big question is why do we spend so much time, MONEY and energy on boats when they cause such heartache.

Perhaps it’s because of views like this that greet us when we sit and have coffee in the morning.   Sorry Barry and Diane, our view is the same as yours. 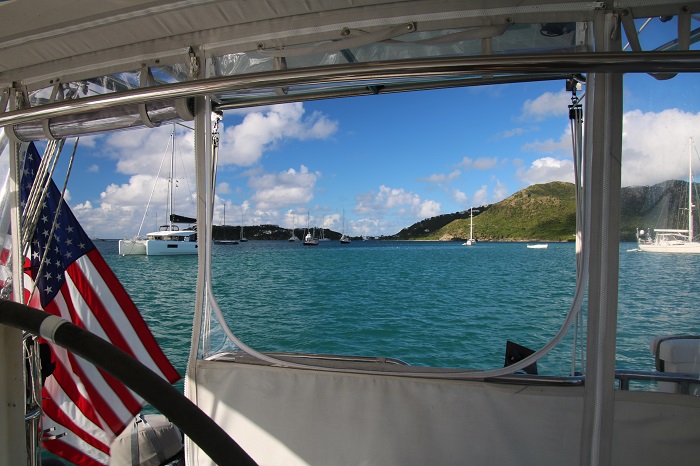 And, as if this view isn’t spectacular enough, I expect that a passing shower will show up in the next hour or so and leave a beautiful double rainbow in it’s wake.

And, to be on the beach having lunch at a lovely waterside cafe with Pandora nearby riding comfortably on her anchor. 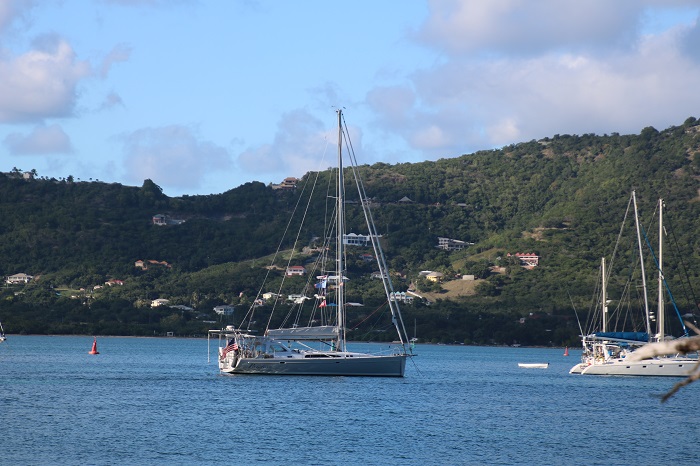 Break out another thousand?  I’d prefer not to think about all that, I’ll just enjoy the view.

I do so hope that my fridge doesn’t crap out.  I’d hate for the ice to melt.  That would indeed be tragic.

3 responses to “Break Out Another Thousand”