You can get Thai in Antigua.

Thanksgiving has come and gone and Brenda and I have found ourselves in the midst of a crazy, way over-scheduled, holiday season.

We arrived home in the wee hours on Monday morning, Thanksgiving week, and within a few hours we were back in the car headed to see our Son and his family including our three grandchildren in MD.  A short few days later, back to CT and another Thanksgiving dinner with friends.

We will now be home for about a week when we head back to MD for our oldest grandchild, Tori’s birthday, who turns three.  After that quick trip, we jump on a plane to spend Christmas with our other son and his girlfriend in CA.   A week there and then back to CT for a three day whirlwind to winterize the house and head back to Antigua.   Oh boy, we will need a vacation after all that but it’s going to be great to see everyone.

Yes, we will have been home for nearly 5 weeks but we will put on a lot of miles and had little time to relax.  After the life of “nothing happens before noon on Pandora”, the holidays seem nearly out-of-control hectic.

Of course, that isn’t made any easier by the pile-up of “deferred maintenance” at home for the nearly 6 weeks I was away, for the “migration to Antigua”.  Can you say “wow, that’s a lot of leaves on the yard Bob”?   Yikes, I need a vacation.

And speaking of Pandora, even if I wasn’t, a friend sent this great drone shot of her on her mooring in English Harbor where she’ll be while we are jetting around.  Awesome perspective.  Hint, she’s in the middle of the photo. 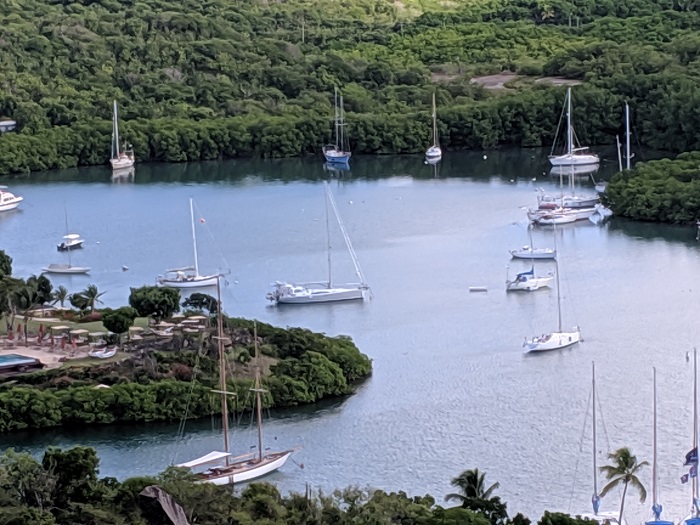 In my last post I showed this photo of a “long tail” boat from Thailand owned by a friend, Paul, one of the owners of the Admiral’s Inn and promised to tell more about the boat and how it got to Antigua.    So, here goes…

So, this type of boat, known as “long tails” because of their distinctive long propeller shaft, are a common sight in Thailand.  The type is known for their simple engine and prop configurations, utilizing cheap and easy to work on, re-purposed automobile engines.  These boats come in all shapes and sizes but the common theme is that they sport an engine on a gimbal with a long straight prop shaft and no transmission, just direct drive to the prop.    Paul, visited Thailand and had this boat shipped to Antigua where he grew up and still lives.  The boat is certainly a standout, compared to the others in the harbor. 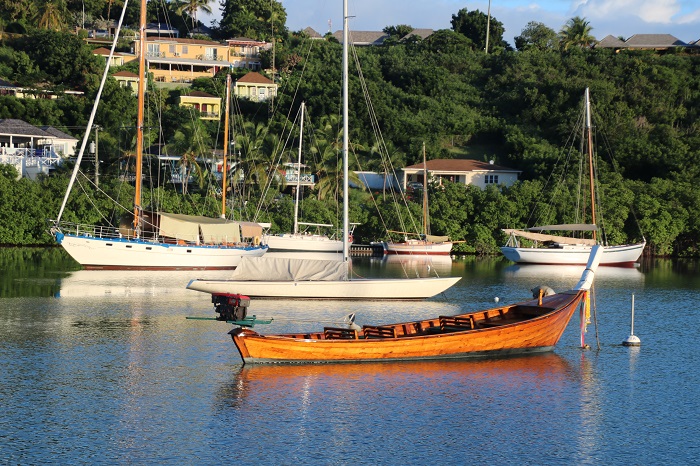 Paul had offered to take me out for a spin so we met at the dock at the Admiral’s Inn.  As he approached the dock he picked the prop out of the water to put it in “neutral”, coasting up to the dock. 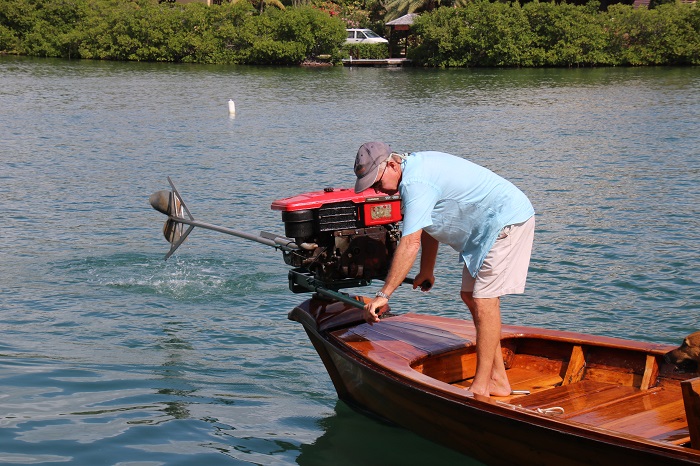 It was very tight maneuvering to clear the dock so he had to dip the prop in and out of the water several times to get us underway. 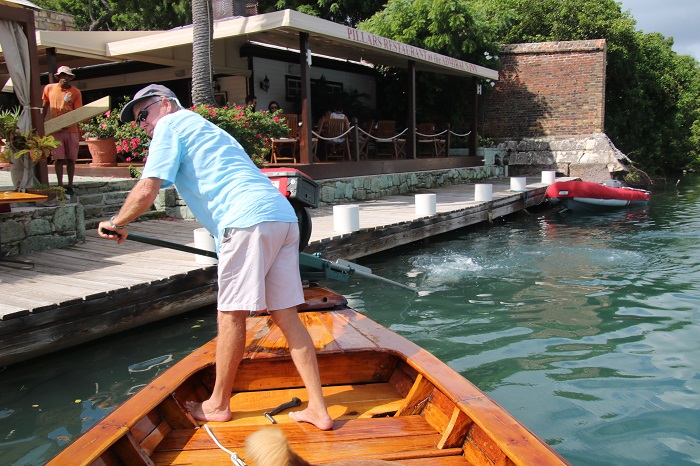 So, off we went.  A great contrast between Paul’s boat and this one in the background, “Home”.  More about that in a bit.

To pilot one of these open boats, you have to stand the entire time while underway. Note the hand crank on the seat behind Paul.  No electric start, you just put the lever into the front of the engine and hope that it doesn’t rev up and take your hand off.  These boats are very simple and the water cooling is drawn from a tube stuck in the water.   No thru-hulls to complicate things. 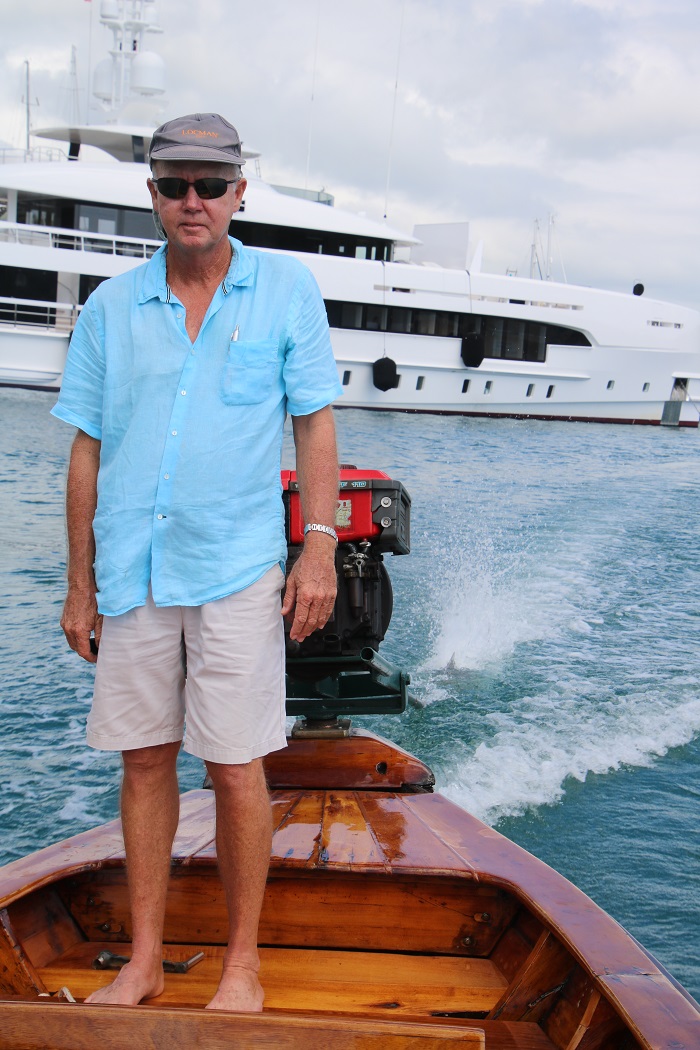 When at speed, you get a feel for just how dangerous this sort of “outboard” would be with a spinning prop, a boat length behind spinning just below the surface.   No going close to swimmers with this boat. 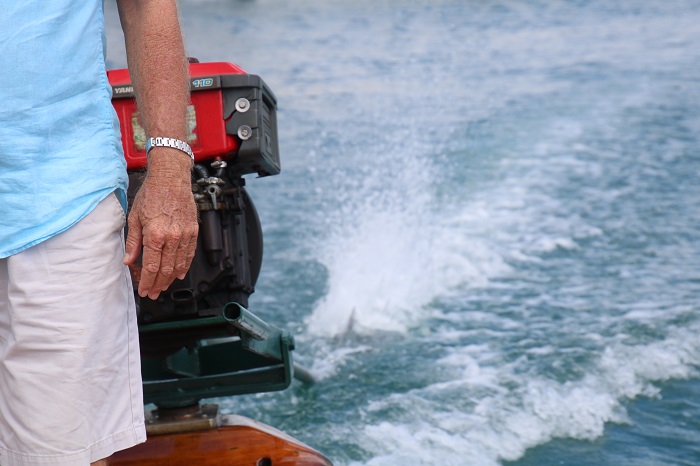 I have always associated this sort of boat with James Bond, who’s Long Tail was a bit more sporty than Paul’s.Anyway, Paul’s boat is more my speed.  And, at a stately un-Bond pace, we headed  out of the entrance of beautiful English Harbor, home to the British Navy during the age of sail.   Just outside are an interesting rock formation called the Pillars of Hercules.  I am told that it is a great spot to dive or snorkel.  In the bow is Astrid, Paul’s sister and partner in the Admiral’s Inn. 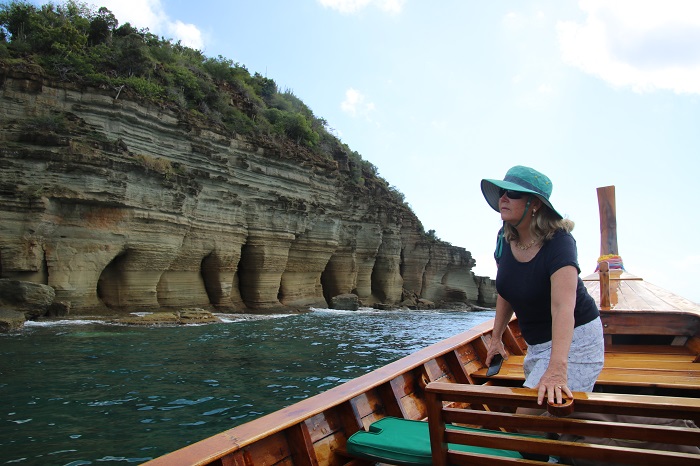 Paul shut off the engine for a bit and we sat for a while enjoying the view.  We drifted a bit to close to the rocks so Paul “backed” us out by turning the engine perpendicular to the boat and gave us a shove with the engine. 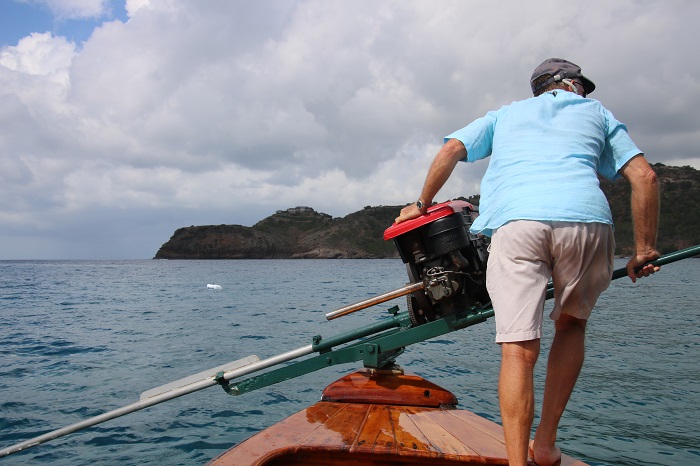 We headed back into the harbor and past “Home” again.   Home is a private yacht launched in 2017.  She’s really impressive, particularly given her 80′ long expanse of windows on both sides and her distinctive plumb bow.

Interestingly, she is the first displacement yacht with full hybrid propulsion, meaning that she has big generators that put power to electric motors to drive the yacht instead of separate diesel engines to drive the boat.  That approach makes sense as it isn’t efficient to drive a boat with diesel engines unless they are running at optimal speed.   Besides, a yacht of this scale has generators running 24/7 so why not run all systems, including propulsion systems from the same power supply?  Yachts like this have multiple generators that are put on line based on the amount of current needed, less at anchor and more underway. 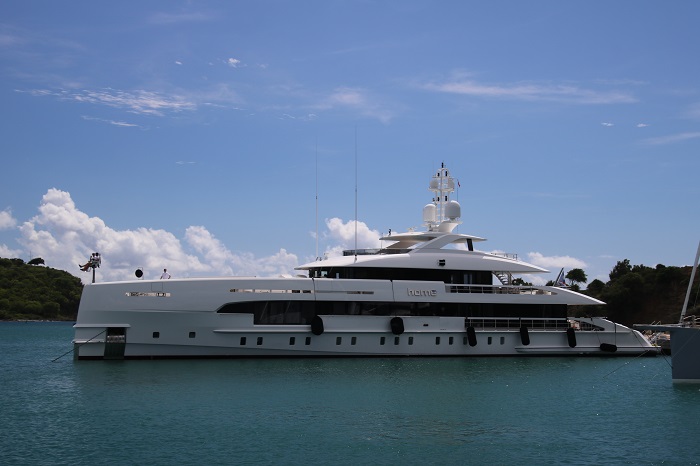 Most large yachts have some sort of special feature that makes them particularly unique and fun for their guests.  How about this spot on the bow to enjoy the view when you are underway?  The seats move up and down hydraulically I guess.  “I can fly, I can fly!”.  I guess it’s supposed to be like that scene in the movie Titanic. 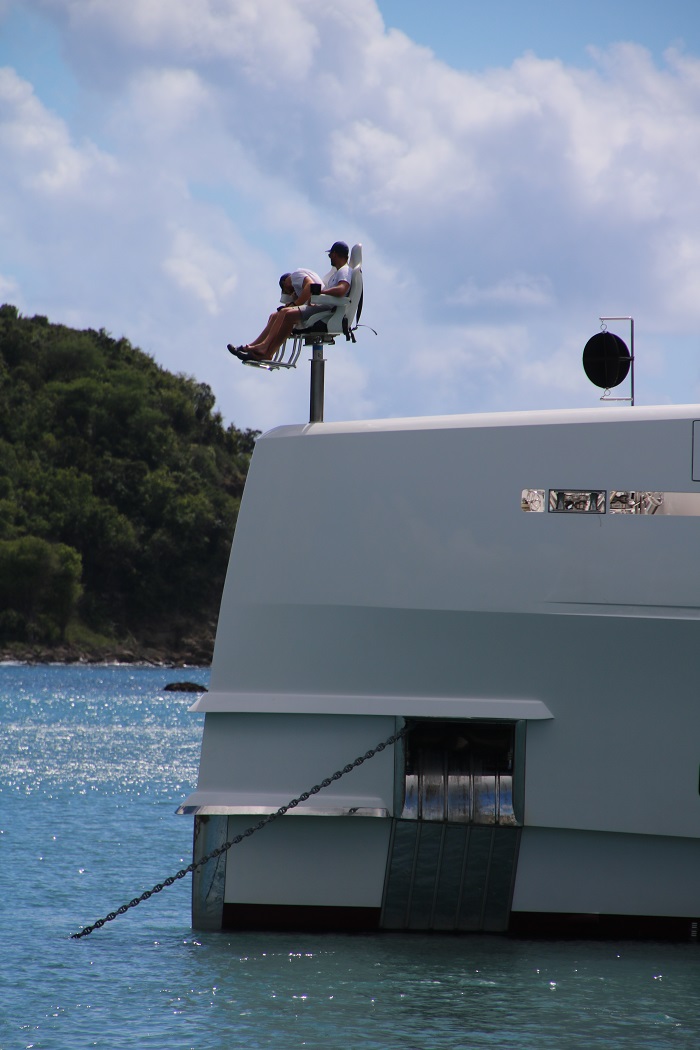 Makes sense if you are paying $275,000 a week to charter her in high season.  Sorry but that doesn’t include expenses and tips for the crew.   “Wow, honey, I thought that was a lot for a week long charter but this seat makes it totally a deal!”  Want to learn more so you can decide if you want to go for a ride in the seat yourself?  Check her out.

According to the luxury magazine “Hello Monaco“, that ran an article about mega-yacht ownership two years ago, there are some 10,000 mega-yachts in service world-wide and a bit less than 100 new yachts delivered each year, so there are lots of charter options to choose from.  As a point of reference, in 1979 there were only about 1,500 mega-yachts worldwide.  Tells you something about the rise of the .001% crowd.

As it costs about 10% of the build cost of the boat to staff and use a yacht each year, you’d have to charter a yacht like Home for many weeks a year to justify owning one of your own.

Decided that chartering is for you but can’t decide which boat to go for?  Not to worry, at the peak of the season last year there were around 80 of these behemoths in residence between Falmouth and English Harbors, so there’s plenty to choose from.

And, the time is right to check them out.  Starting today, December 4th, the charter yacht show opens in Antigua where you can go aboard and decide which is the perfect yacht for you.   And, as it’s so much more affordable to rent than own, you can hardly afford to wait.   And, as if that’s not enough, Home will be open for viewing.    Perhaps they will give you a ride in that cool chair.

Anyway, Home is a bit more complex than Paul’s long-tail.  And it does have a totally cool seat on the bow.  Which boat to choose?  Hmm… tough to choose.

So, there you have it, there are lots of options to enjoy your time on the water, especially in Antigua.

And, it seems, you can even get some Thai, if that’s your taste. I did and it was great.

2 responses to “You can get Thai in Antigua.”