The gang’s all here, mostly

It’s Tuesday morning and we are well into our arrival events with nearly all of the Dawgs accounted for.

We have been really busy with events every night including a very special kickoff cocktail and dinner party put on by the National Park’s Authority on Saturday evening.   It was a lovely evening, totally over the top.  I have photos coming from their “official” photographer.

Earlier that evening we also were treated to a Dawg Jam session on the docks.  It was a nice way to kick off a very memorable evening. 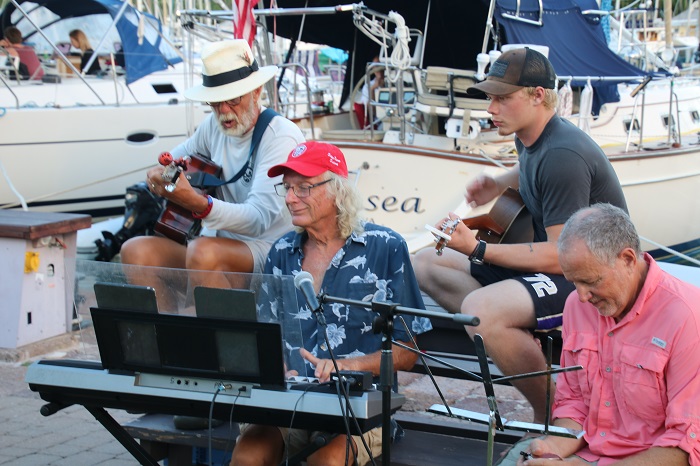 I mentioned in my last post that one of our boats, Cayuga, had lost the use of their engine when their engine water pump went bad and with the light winds that slowed down the entire fleet, they found themselves drifting slowly southward at a painfully slow pace for way longer than they wanted to.  Finally, they were within a reasonable distance of Antigua and Paul, who operates the Admiral’s Inn with his sister Astrid, offered to run the new water pump out, along with some antifreeze.

I had been texting the skipper for several days and then, with them finally only about 30 miles out, off we went, powering 30kts into seas, bouncing from wavetop to wavetop as we closed the distance. 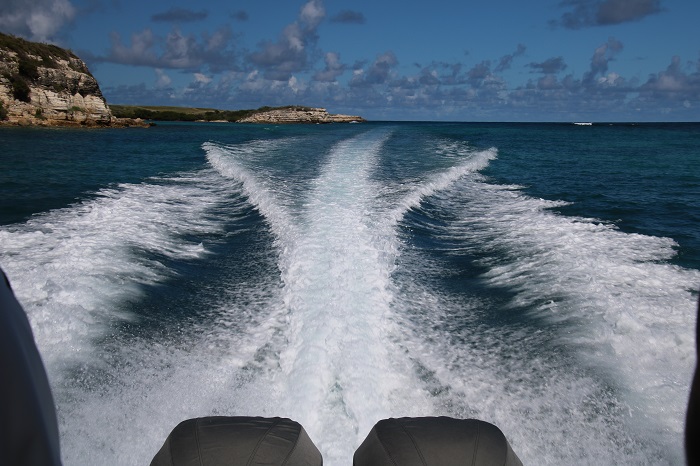 Finally, we spotted them on the horizon and closed in.  Oh boy, did they look happy to see us. 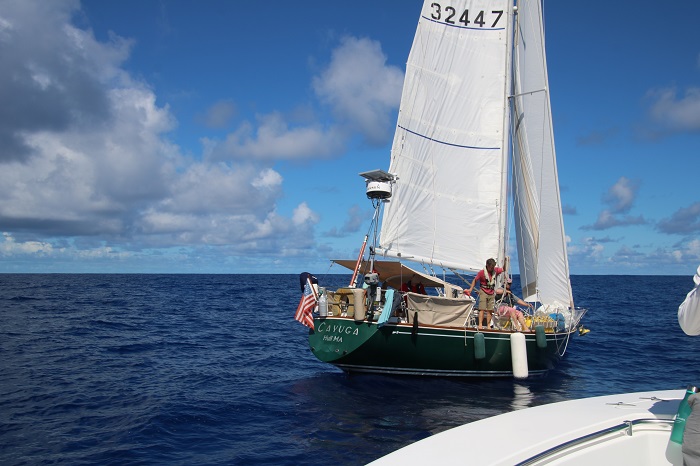 After they confirmed that the pump was in fact the right one for their engine, we sped of for shore and left them to put on the new pump. 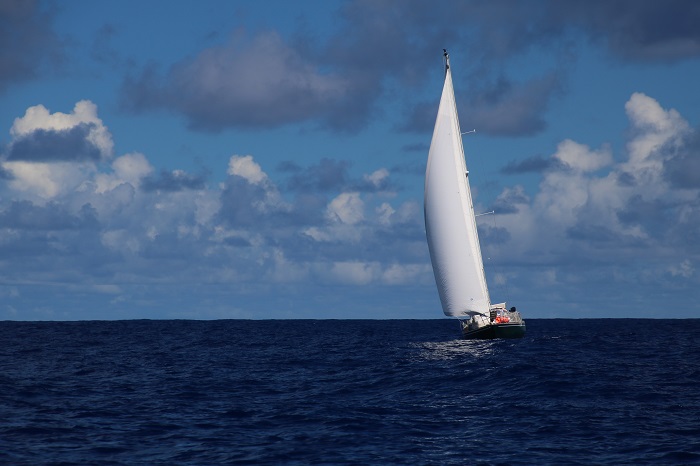 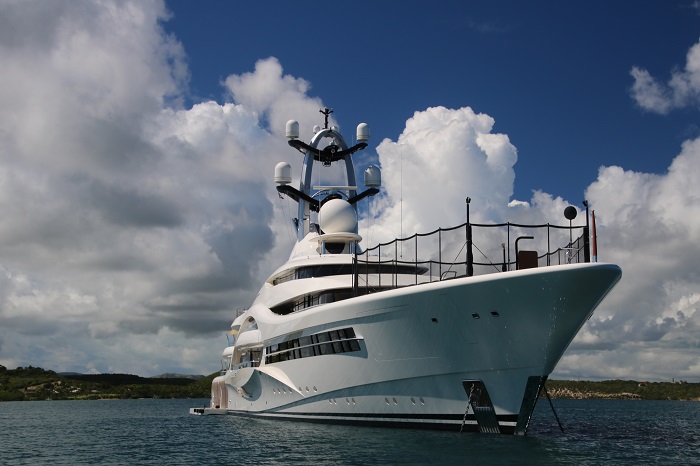 It’s amazing what you can get for a 1/4 billion these days.  Anna is over 300′ long.  Huge.  Her owner is Dmitry Evgenevitch Rybolovlev.  Yes, that sounds about right.  I doubt that you will see Anna in US waters any time soon.   Want to learn a bit about this guy?  Click here for all the details.  He purchased a home in FL for $95,000,000 from none other than Donald Trump.  That totally fits…

Nice garage for his toys. 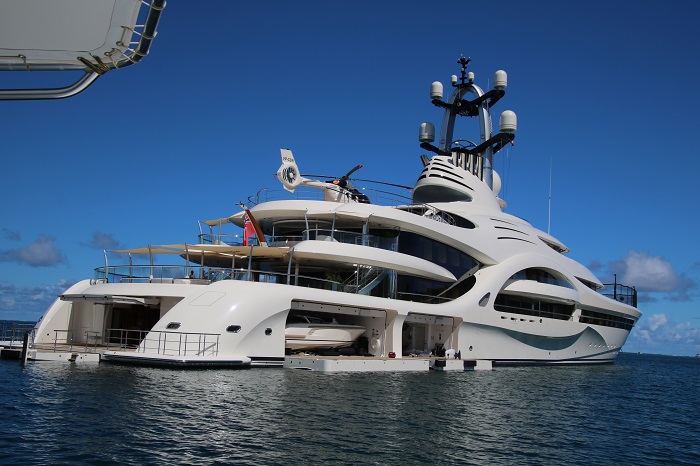 And, I expect that this isn’t his only chopper. 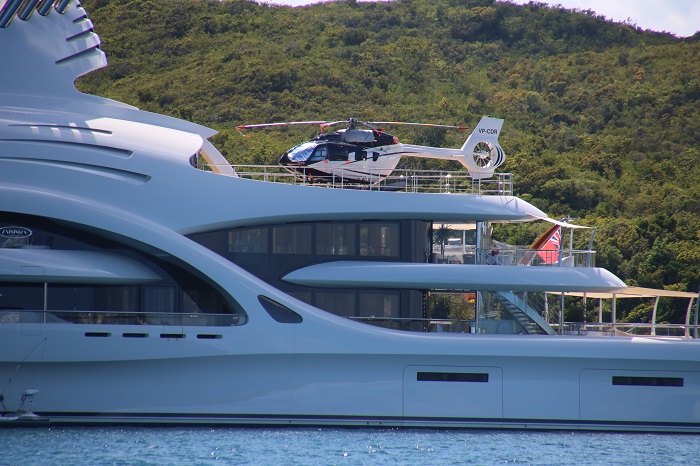 Along the way we passed Eric Clapton’s home, perched high on a ridge.  The good news is that Eric doesn’t use the place much and it’s for rent.   Check out some pix here to see if it’s up to your standards. 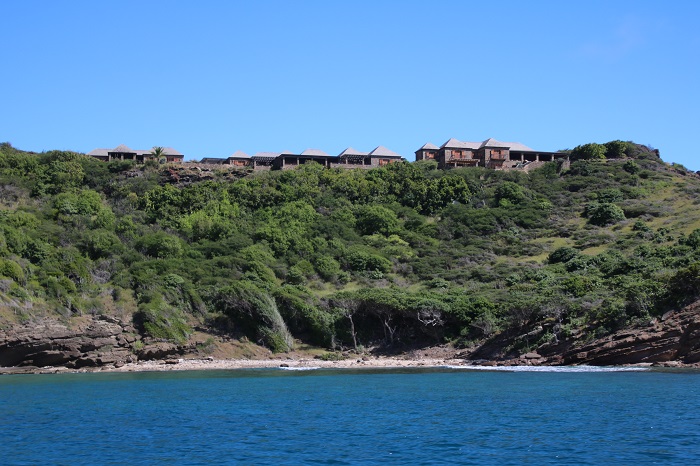 Back to English Harbor and the fleet on the dock.   There’s Pandofra in the middle. 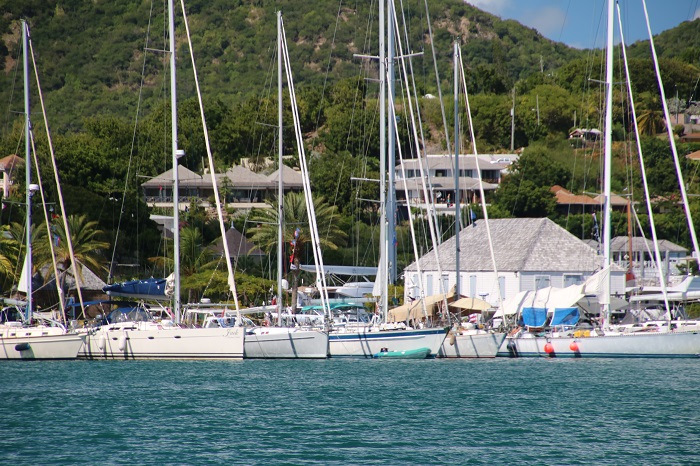 Perhaps easier to see close up.   Looking good in her new colors. 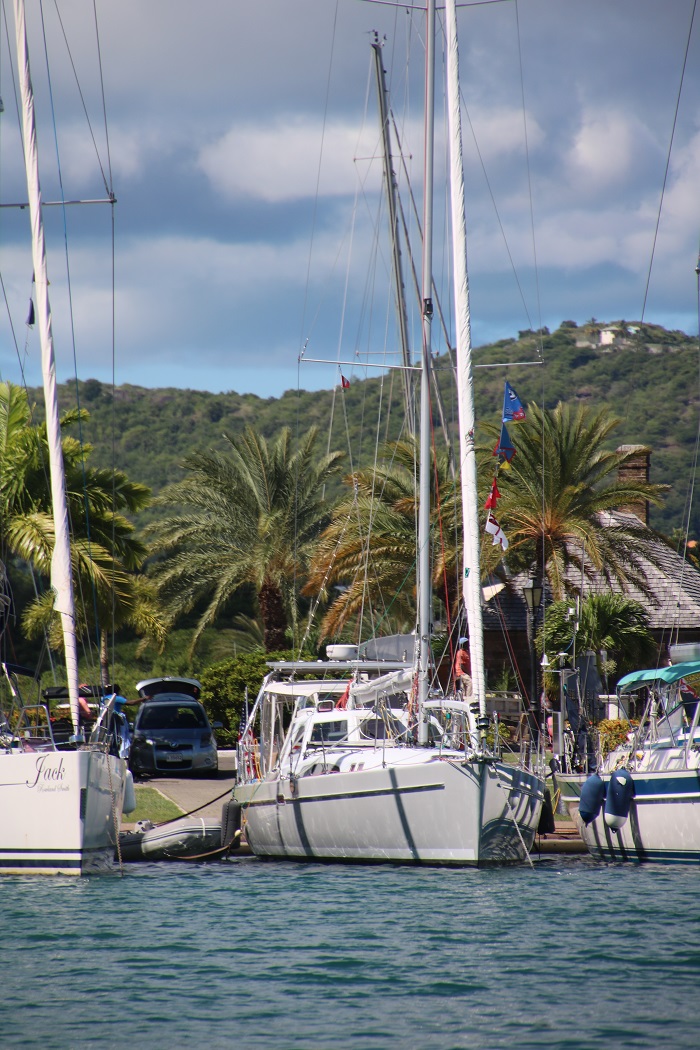 Ok, back to our parts delivery to Cayuga.

Later that afternoon Cayuga arrived and tied up in Nelson’s Dockyard looking really happy to be near dry land again after about two weeks on the high seas.  Not surprisingly, they were thrilled to accept a few cold beers from me. 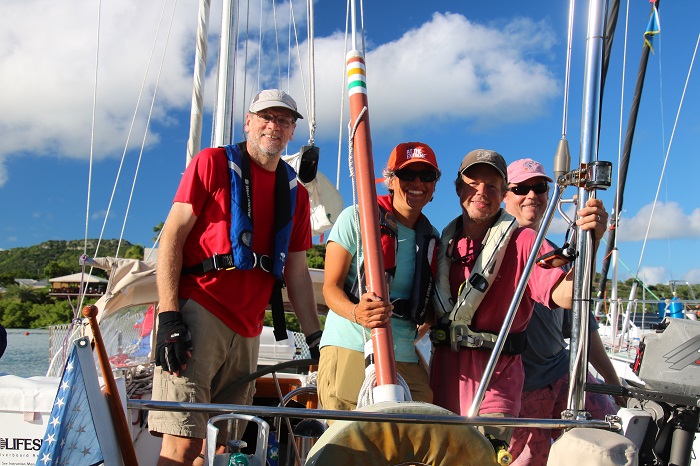 It was very gratifying to be there when they arrived knowing that there were many behind the scenes of the Rally that kept track of them and did everything possible to help them make their way safely to Antigua.

When I began organizing arrival events for the rally a few years ago, I realized that with most boats sailing so many miles to Antigua, their arrivals would be spread out over many days and to have an “arrival” dinner, a single event meant that some boats would be in port days or a week before some of the slower boats  arrived.  Somehow I didn’t think that it was fair to have the faster boats wait days and days for a single event.  And, at the same time, I didn’t want the slower boats to miss all the fun.

As a result, we decided to put on a full week of events to be sure that everyone has the opportunity to enjoy at least some of the arrival festivities.

One of my favorite events is the “Arrival Cocktail Party” at the Admiral’s Inn, located right in the dockyard.  It’s a beautiful place and authentic in every way, as part of the original dockyard that served the British Navy during the age of sail.  Of course, we always need a “class picture”, right?   This was our biggest group yet and what a fun event.   As most of the crew had already left to head back home, this group is nearly all skippers and family, still a large group by any measure. 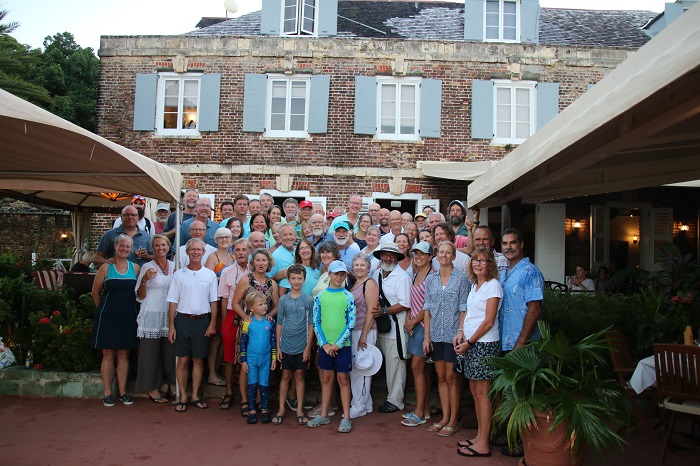 The first year that we decided to send the fleet to Antigua, following the devastation in the Virgin Islands, the destination for the rally for so many years, I only had a few weeks to organize events here in Antigua.  And, it was Astrid and her brother Paul, who run the Inn, that really stepped up to help me pull together a proper welcome to the fleet and now, several years later, they are still helping skippers and crew settle in after a long voyage.

We took a moment to recognize them for all their support.  Of course, I also wanted to thank Paul publicly for taking the lead in getting the parts out to Cayuga. 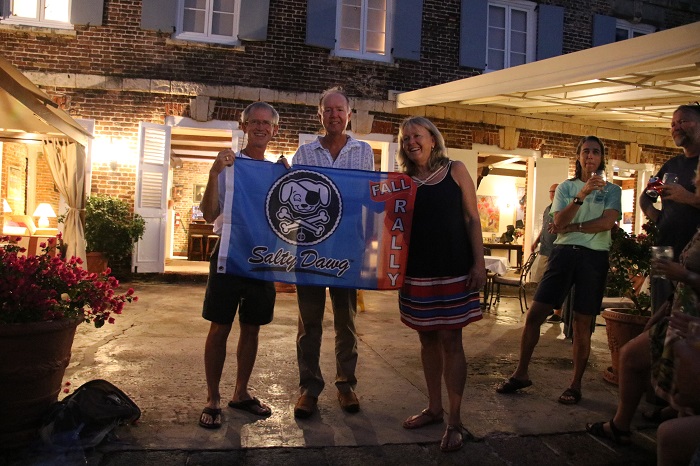 Another tradition for the Dawgs is to present the “tail of the Dawg” award for the last boat to arrive prior to the welcome cocktail party, this year to the skipper and crew of Aleta, a bottle of wine donated by the local grocery Covent Gardens. 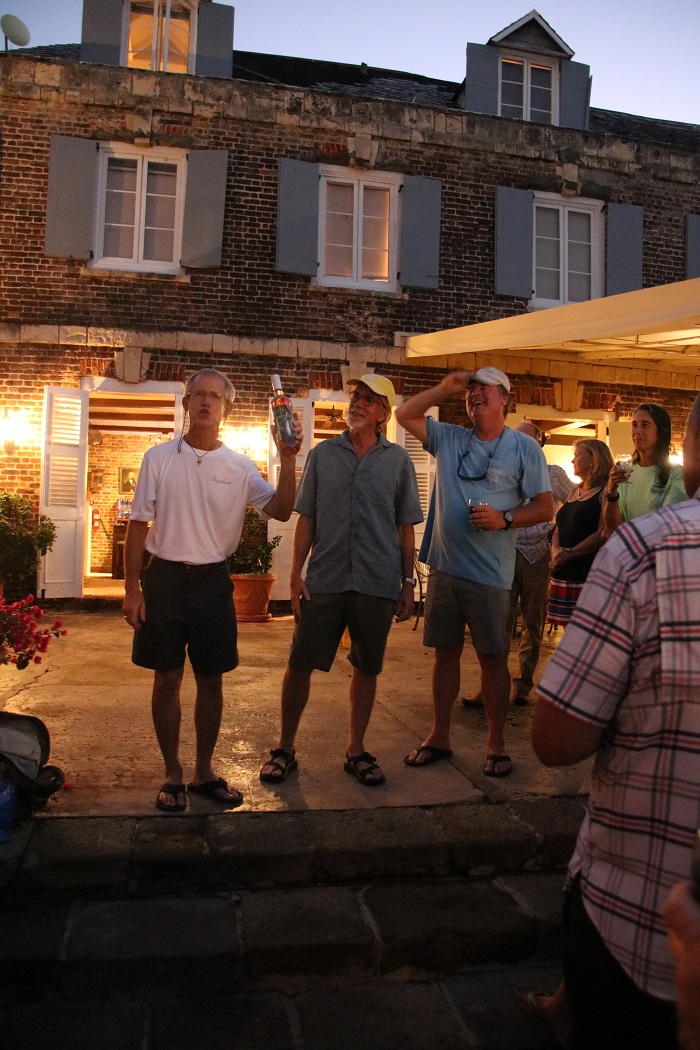 A few days ago we were also hosted at the Antigua Yacht Club, another group that has been really supportive of the Rally.  As in past years, we were lucky to have the Minister Hernandez, the head of tourism on the island, address the group and he described how important the cruising community is to Antigua.

His goal, 200 boats.  I’ll have to get cracking as while we doubled that number from last year to 40 this year, we still have long way to go to reach his goal.   A success by any measure but also short of my 100 boat goal.  I presented a rally flag to the Minister with the help of the Commodore of the Yacht Club, Franklyn Braithwait, also very supportive of our efforts. 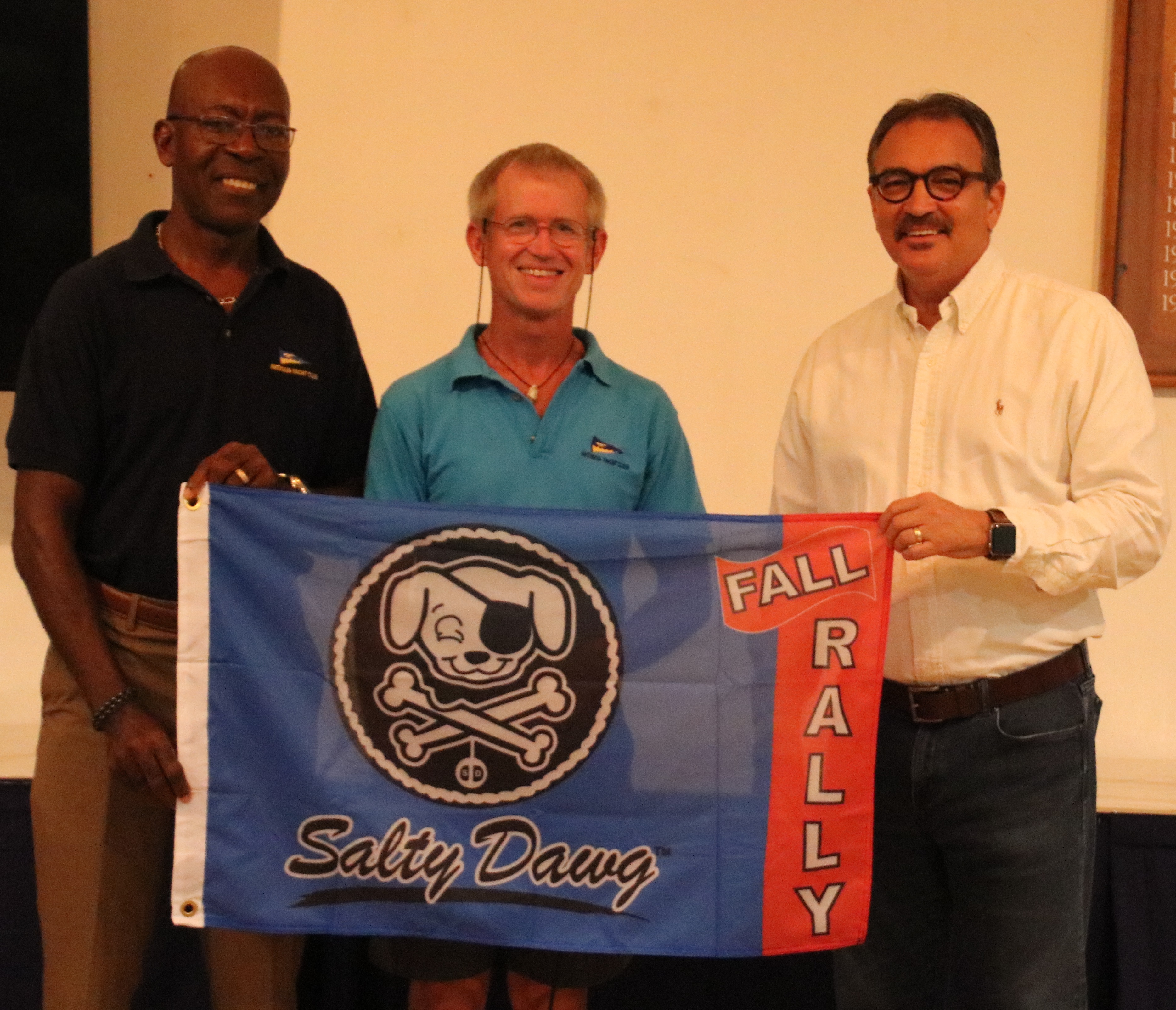 So, that’s about it for now and we are only half way through our week of events with “crab racing” on tap this evening at the North Sails loft.  I’ll admit that I did check on the field of competitors when I visited the loft yesterday to see which might be the winning crab.  Hmm…

My careful evaluation of the would-be competitors was inconclusive as they all appeared to be sleeping deeply, perhaps to save their strength for the competition.

All and all, we have been having a great time and I for one, am so pleased to see that the gang is all here.  Well, mostly all here as there are still a few boats making their way, perhaps arriving today.

I can’t wait to welcome them to Antigua.