As I write this it’s Tuesday morning and we are broad reaching down the upper  Chesapeake from Chesapeake City toward Annapolis at better than 8kts where we spent yesterday enjoying the charms of this beautiful colonial town.   Here’s the view as we make our way south.  It’s a cool day with a nice breeze out of the north. 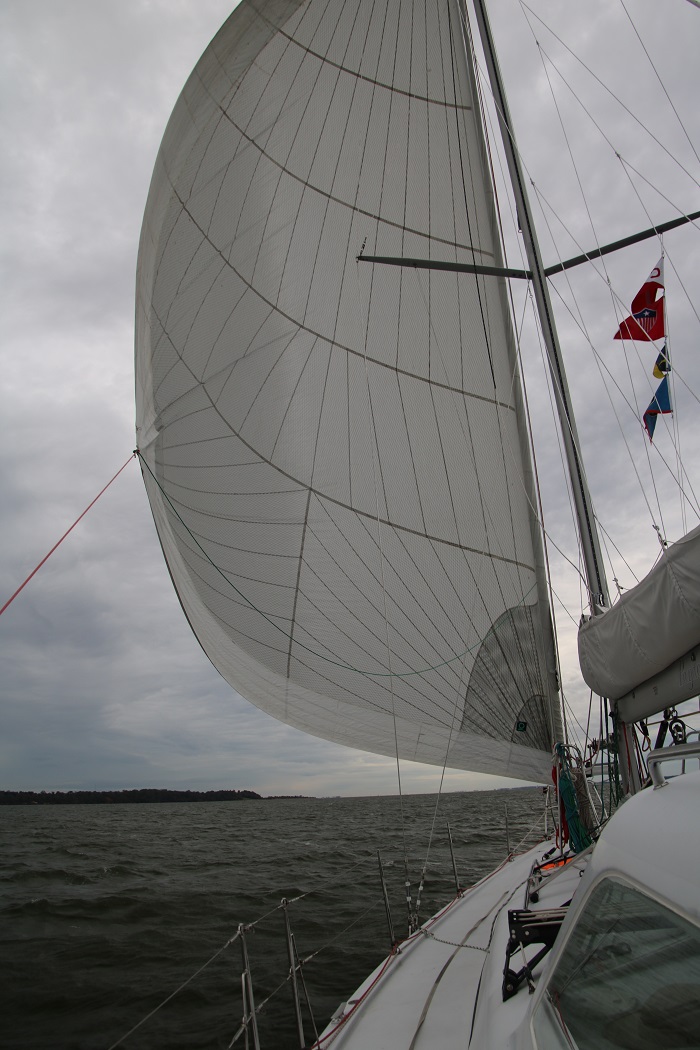 Today we are on the final leg of our delivery from the Essex Yacht Club where she was on the dock for nearly a week as we packed her with provisions for our winter season aboard.  Of course, my little truck, better known as “Pandora’s box truck” did the heavy lifting to the club. 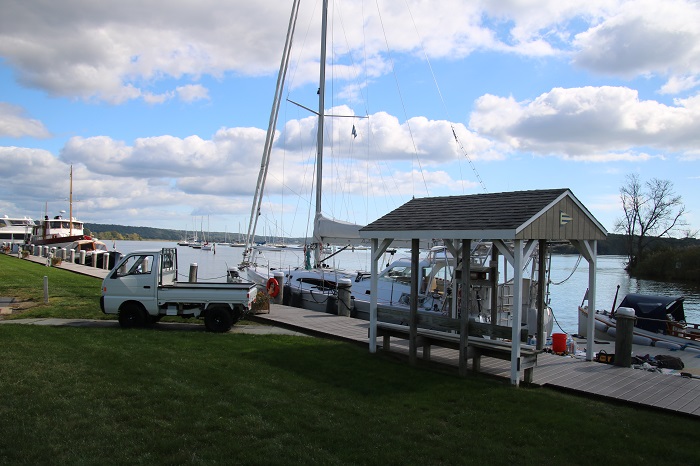 We cast off Pandora’s lines at the Essex Yacht Club on Saturday morning at 04:00 and picked our way down the river in the pitch dark.  On board are my crew including Jim, who has sailed with me from the Caribbean along with Shawn, who works for Chris Parker the weather router.  Shawn wanted to get some offshore experience and Chris asked if I could bring him along.  A fourth, Steve joined us to get some offshore experience as well, Steve has been sailing for years but has not spent a lot of time in blue water.

So, off we went in the cold and dark.  Cold enough to risk frost, the first of the season, I was warned.  Time to head south for sure.

Everyone arrived on Friday and after a short night, getting up so early, we headed toward Long Island Sound and Annapolis.  Some years ago Brenda and I decided to purchase a set of good quality audio headsets to keep on board and allow us to communicate from helm to bow in a normal speaking voice.  They  sure proved their worth on Saturday morning as we picked our way out of the river in the dark.  As I piloted, Jim stood up on the bow with a powerful flashlight, calling out marks along the way.  The headsets were great as we could easily hear each other in a normal speaking voice.  It made a stressful run in the dark much simpler.

So finally, Pandora was on her way to Annapolis, my first big trip since heading north from Antigua in the Spring of 2018.    It’s been a long road with many projects completed over the last 18 months including a new paint job along with other projects and upgrades too numerous to mention.   Although, if you follow this blog you’ve heard about all of them in excruciating detail by now.

And that would include plenty of whining about the “headliner from Hell”, a project that it seemed would never end.  Happily, the job was finally completed and turned out well, beautifully actually, if a few months late.  Chad, the canvas guy, ultimately did a beautiful job and I am really happy with how it turned out.  The problem is that he took on too much work and the guys he hired to help weren’t able to produce the quality he expected and so he ended up way, way,  behind.  Delayed or not, he ultimately did a great job and everything looks great.  I’m happy now.

As is so often the case, as the deadline for our departure approached I decided to tackle yet another job with precious little time to spare before leaving.  This time, to install a Hydrovane wind vane, which will steer the boat by wind only, something that I have wanted to do for many years.   Getting it installed in time for departure was a tough as I didn’t even order the unit, shipped from England, until a little less than two weeks prior to shoving off.  While it only took one week to get to me, which was amazing, I only had less than a week to do the install.

Installing the unit was pretty straight forward over three days but involved drilling more than few holes in Pandora’s transom, something that I positively had to get right.  There was a lot of head scratching, measuring twice and drilling once, well actually measuring many, many times but it turned out very well.

There remain a few details to work out with regards to how to best stow the dink when underway as the unit is now sticking out on the transom.  Not sure exactly how to resolve that but I expect I will find a way.  I was able to try the unit on the run down  for a while and after fiddling with the boat balance it worked quite well.   Unfortunately, I didn’t take pictures of it steering happily with a rooster tail spraying up as it sliced through the water at close to 10kts and I’ll have to remember to take some photos when I use it again.   It’s an impressive sight and pretty neat to see it steer to the apparent wind for hours at a time, using no electricity at all.  As my electric autopilot is very energy hungry, that’s going to be good for my batteries on passage.

We spent much of the first 24 hours of our run motorsailing as it was critical that we keep our speed up and make it far enough south before the wind shifted to the south and directly against us.  While the wind was behind us at about 15kts for much of Saturday the apparent wind speed is only half that and not nearly enough to keep our speed up enough to make it to our waypoint by the time of the expected wind shift from north to south, anticipated to be around midnight Saturday.

With more favorable winds, we would have set a course directly for Cape May at the mouth of the Delaware River but because of the expected adverse winds, we instead headed to a waypoint about 50 miles offshore and east of the Delaware river.  The idea was to head south and as the wind began to shift, adjust our course an follow it around, ending up on a reach to the river mouth up the river to the C&D canal with a south wind behind us.

This approach, suggested by Chris Parker, would allow us to move faster and be more comfortable, even if the distance is a bit farther.  Happily, it worked and the strong southerlies didn’t actually kick in until around 04:00 Sunday, about three hours later than expected, giving us the opportunity to make our waypoint and enjoy some fast if bumpy sailing on the final leg to the river.

We anchored on Sunday night on the DL just north of the Canal entrance and then headed into the Canal and Chesapeake City on Monday morning.  With an expected wind shift back to the north on Tuesday we decided to wait a day and enjoy the quaint colonial town before continuing south to Annapolis.  Main Street has some really lovely old buildings. 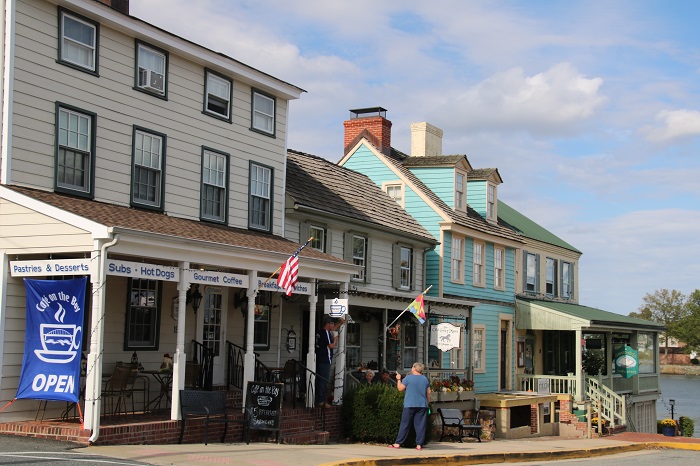 The view from the town green of the harbor shows how quaint a spot it is, with plenty of space to anchor. 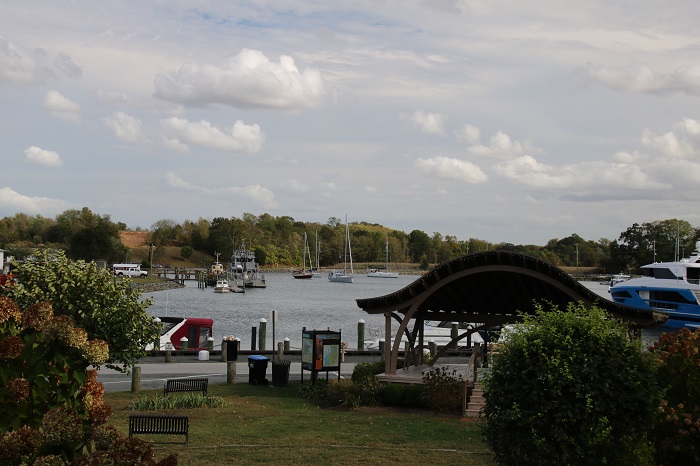 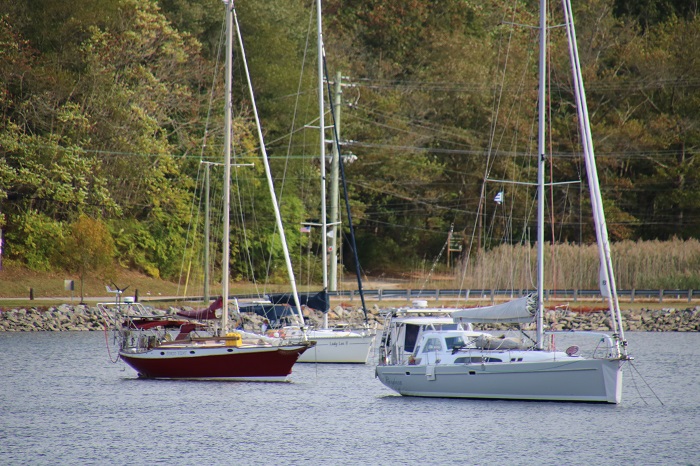 The bridge that towers over the village is a dramatic contrast to the colonial era homes.  I’ll bet there was plenty of controversy when that bridge was proposed.  On the one hand, it made the town much more accessible so perhaps it was welcomed. 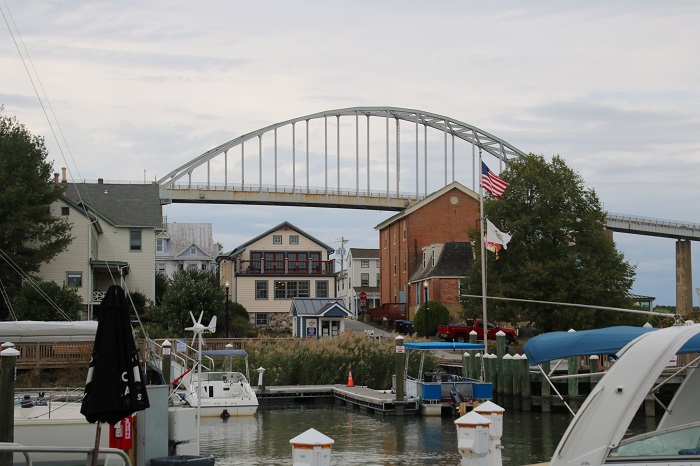 With a few more hours of sailing in front of us, it’s a lovely day to be on the water and Pandora is happily moving south to our final destination, Annapolis.

I’ll be in town for much of the week, giving a talk at the Annapolis Boat Show on Thursday morning and enjoying the boat show and visits with friends.   Brenda arrives on Friday and after that, we will head to Baltimore to see our son and his family before heading back to CT.

When we leave I’ll put Pandora in a friend’s slip close to downtown Annapolis for almost two weeks before I return to bring her to Hampton to prepare for the run to Antigua and the Salty Dawg Rally.

Other than that, noting much going on.

I can’t wait to see Brenda.