>Bailey’s Island ME, new friends and a mud oven

>The sun is out, we are moored in a little cove on Bailey’s Island in Casco Bay and all is well. When we were in the harbor, the Gosling’s, the other day we invited a very nice couple to join us for lunch and asked them about where their favorite places were to visit in Casco Bay. One of the spots that they mentioned was near the rock crib bridge on Bailey’s Island.

Located at the end of long peninsula jutting out into the bay, the harbor is very compact and nestled into the nortern point of the island. We arrived late in the afternoon and as it was fairly windy, the outer harbor unappealing at best. Instead, we decided to head into a more protected area further in and picked up a mooring. After getting settled in I set out to find out who the owner of the mooring was. After a few stops at various boats with folks working on them,  I was told that the mooring belonged to a couple, Charlie and Sally who lived in the house on the point. After tromping right up to their back door and introducing myself, Charlie readily agreed that we could indeed use their mooring for the night.  He also did one better and invited us to visit for coffee the next morning which we did and had a wonderful time.

Their home was lovely and was full of Scandinavian touches, the details of which warmed Brenda’s heart as it would any weaver who was particularly fond of Norwegian things. We sat with them for several hours at ease immediately.

Our original plan was to head out on Saturday afternoon to join up with our friends Barbara and Steve who own a small home in nearby Cundy’s Harbor that evening. However, when I called Steve to make  announced that they had been invited to an outdoor pizza party and would we like to join them. As luck would have it, the party was actually less than a ten minute walk from where Pandora was moored. Talk about luck. We could have gone any number of places and yet chose the one place on the Maine coast that was the site of a party were our friends were headed. We do live right.

On top of that, our new friends Charlie and Sally were also going. What a small world. As if that wasn’t enough of a coincidence, I was also speaking with someone on the boat next to ours, a Valiant 40 named Calypso, also a Bob Perry design (he drew the SAGA 43 design years later) only to learn that John and his wife Margo had sailed Calypso around the world for ten years some time back and, no lie, that he was a good friend to Steve and Barbara, the very folks that we wanted to hook up with. 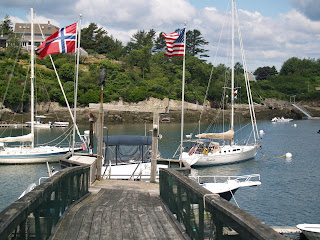 There’s Pandora on the right and Calypso on the left  but different none the less.  Note the Norwegian flag on the dock.

What a small world given who we ran into on such a small island. I have always told my boys that you have to be very careful what you do in public, no matter where you are, as you never know who you might run into. Coincidence upon coincidence at Baley certainly reinforced that point to me.  It also reinforces the point that you have to reach out and meet folks whenever you can.

In any event, off we went to the party, and a outdoor mud oven pizza party at that. I had never seen a mud or beehive oven before and was immediately smitten. I have to have one and after enjoying wood fired pizza and beer.  No the beer wasn’t wood fired.  Brenda and I have decided to build one ourselves when we get home in the fall. What fun.

And of course, you can buy a book on the subject from Amazon, Build Your Own Earth Oven, and it’s the 3rd edition, at that.  Thank you, I think I will.  Perhaps I will order a copy and have is shipped to the Tugboat Inn in Booth Bay Harbor so I can read it as we cruise the Maine coast.  Perhaps we will have to get a donkey and goats to go with that.  Perhaps not.

Anyway, back to the mud oven. Theirs was built on a rock base and the oven itself was made of a mixture of clay, sand and straw, vaguely shaped like a fat fish with a big mouth, and there it sat, in all of it’s glory, under a small lean too with a corrugated steel roof. 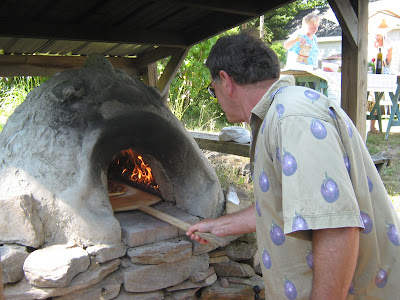 You have to love it.   A giant pile of mud that you can cook in. 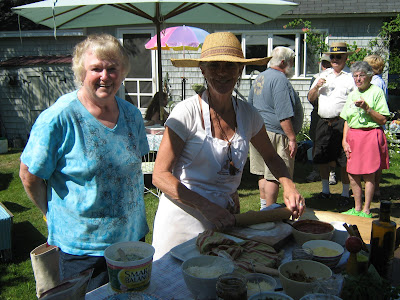 Here’s Brenda and some of the other guests, feeling relaxed and well “pizzaed”. 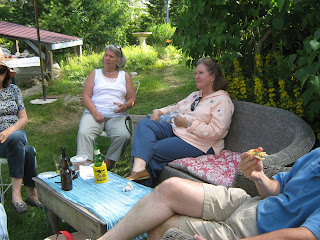 There were many types to choose from including Gorgonzola cheese and pear, artichoke hearts, onion and even chocolate chip, marshmallow and strawberry pizza for desert.  One thing for sure, it wasn’t possible to get a photo of an entire pizza as they were cut up and eaten so quickly. 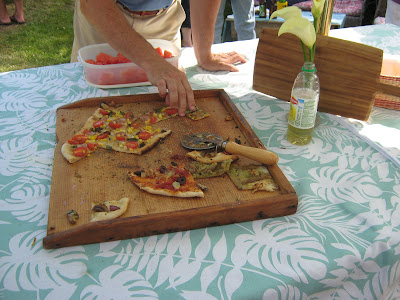 Well, off to Amazon to order a mud oven how to build it book. It’s just so awesome.

Back to our mooring hosts, Charlie and Sylvia. They have built a terrific home on the point and have landscaped it wonderfully. A particularly nice feature is their tidal pool built into a rock ledge on the edge of their gardens fed from a pump out in the cove. While the ledge is almost 15′ above sea level, water is pumped up from the harbor and cascades over the rocks back over the rock ledge. It’s very charming. 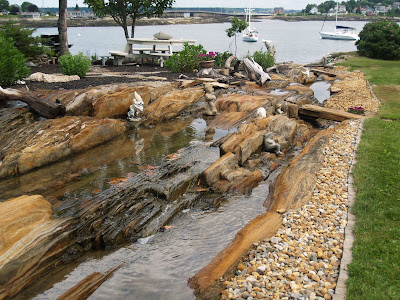 The view from their porch is fabulous. It’s hard to believe that there is such a wonderful place on earth, and Maine is full of such views. 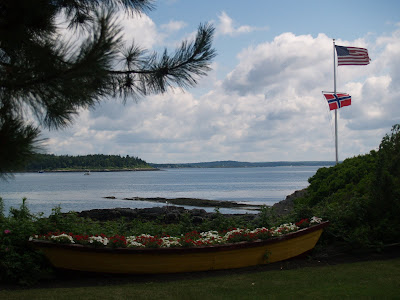 There is also a really unique bridge just across the harbor, the only rock crib bridge in the world.   Supposedly, there used to be one in Scotland but it was dismantled during World War Two, and was never rebuilt. The construction technique is really interesting, as it’s built of a lattice of granite slabs dry laid in a Lincoln Log style with no mortar.  Probably not something that would be a good idea in an area prone to earthquakes. 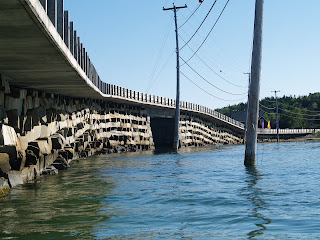 The bridge is over 1,500 feet long and is a source of pride to the local residents having been recently rebuilt by the state.  Check out a bit of history of the bridge.

The details are impressive, and it’s hard to believe that it’s nearly 90 years old. 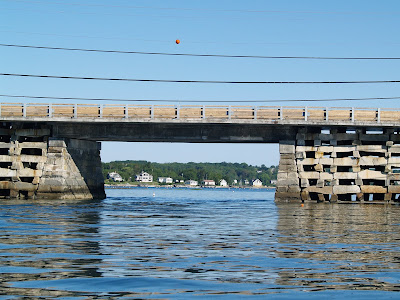 The detail work is quite impressive. 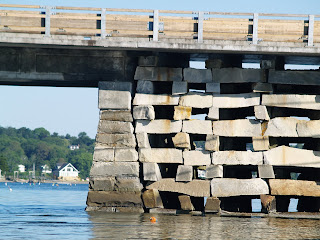 Also, I forgot to mention that John and Margo, with the Valiant 40, on their decade long cruise around the world, decided to purchase land in New Zealand and now split their “summers” between Maine and New Zealand. How wonderful is that?

Now, the next step for us is to decide where to go tonight as it has to have good Internet coverage. Not sure but it’s 9:00 and time to decide.

We now have a number of new friends, a place to return and soon a mud oven. Life is good.