Not in Maine but not so bad.

We left Newport yesterday and are now in Wickford.  Yesterday morning we were greeted with our first fog of the season, perhaps more than anything, a reminder that we are NOT IN MAINE, as planned.  Yes, the headliner, the cause of our delay, is mostly done but not perfect yet.  Stay tuned for more on that ongoing saga.

So, back to the fog.   This was the view that greeted me yesterday morning just after sunrise.  The shore was a lot closer than this photo suggests.  The fog was short lived and burned off as the sun rose. 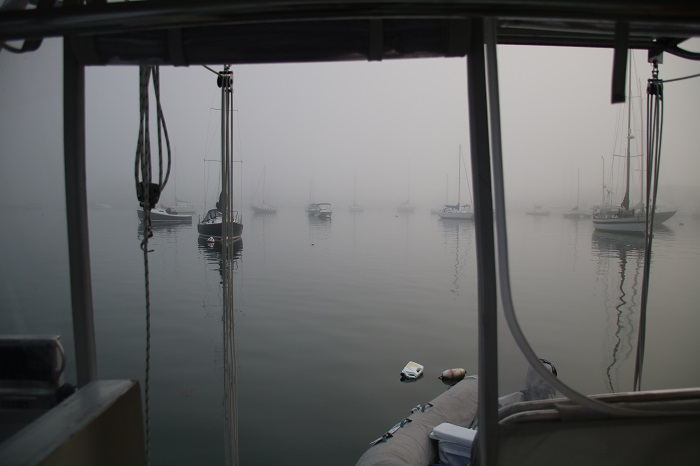 We’ve been on the move for about a week now, with a short visit to Maine (by car) where I gave a talk at the Camden Yacht Club about cruising the southern Caribbean.  Our visit was brief, only two days, and we stayed with our cruising friends Tom and Jane of Bravo, who we first met in Bequia, the winter before last.  They were very gracious hosts and we loved staying in their charming home, snug in Camden village.

On our first morning, Tom and I braved the light rain, making the short walk to the waterfront to take in the sights.  With the Camden Classics being held that week, there were many beautiful boats in the harbor, with more on the way as the week progressed, promising some 80 beautiful “temples to sail” in attendance by the weekend.

This boat, Belle Adventure from London, built in 1929 and designed by the legendary Fife, is a lot older than she looks.  Note the canvas covering her bright work that will stay in place until the owner shows up.  It’s a lot more economical, relatively speaking, to build canvas covers than to renew the varnish.  Out of the UV of the sun, the varnish will keep fresh longer. 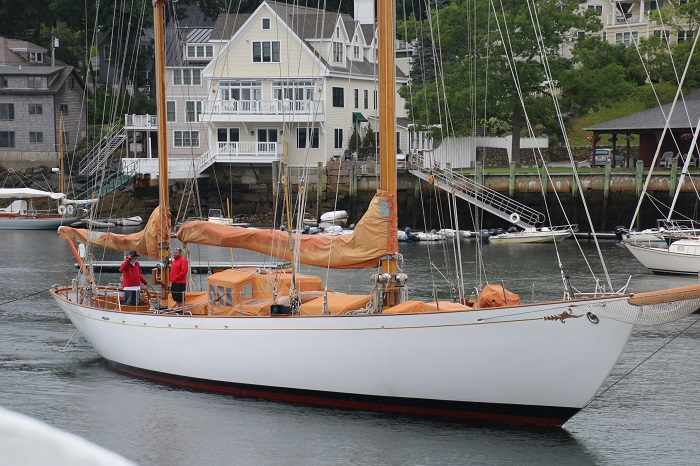 She has lovely lines and is probably in better shape than when she was launched so many years ago.   I’m pretty sure I have seen her before, perhaps in Antigua. 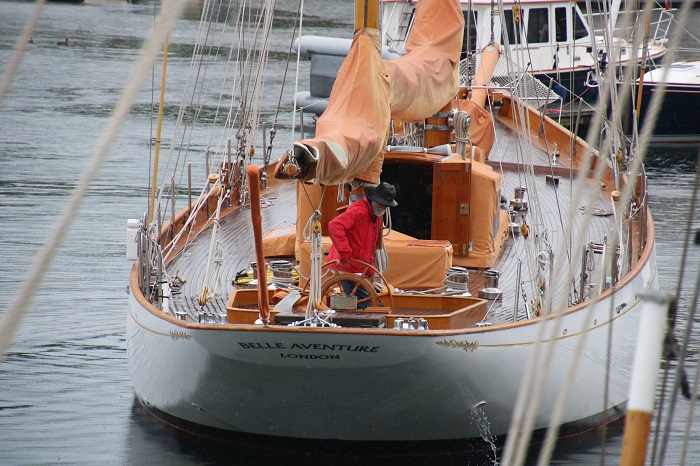 It was painful to know that I would miss all the action of the regatta as we had to head back home the next day.

This much varnish clearly makes the point “I can afford it!”.  You will never see a yacht with this much perfect varnish that isn’t maintained by an owner, ast least one that actually sails their boat.   Interestingly, this boat was built only a few years ago and is modern in every way.  This sort of boat, looking like a classic and yet sporting a modern under body and rig, is called “spirit of tradition”. 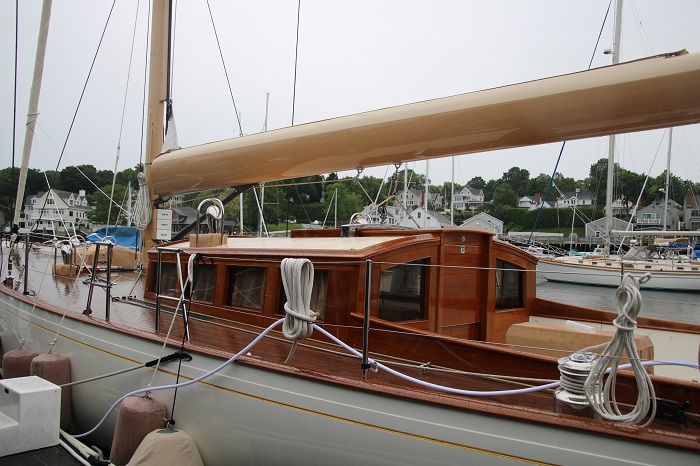 Camden harbor is perhaps my favorite harbor anywhere.  It’s terribly quaint.  Being here reminds me of so many fun cruises to Maine in years past. 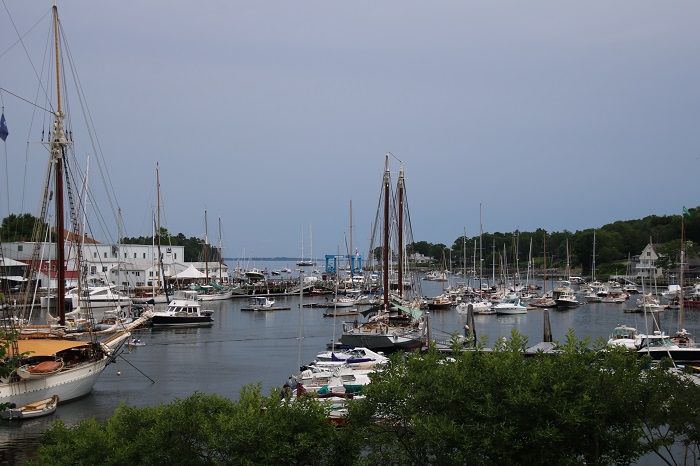 There is a babbling brook at the head of the harbor, and it was babbling away as expected.  I can recall time years ago when we were in this harbor when we had a huge summer downpour and the babbling become a roar. 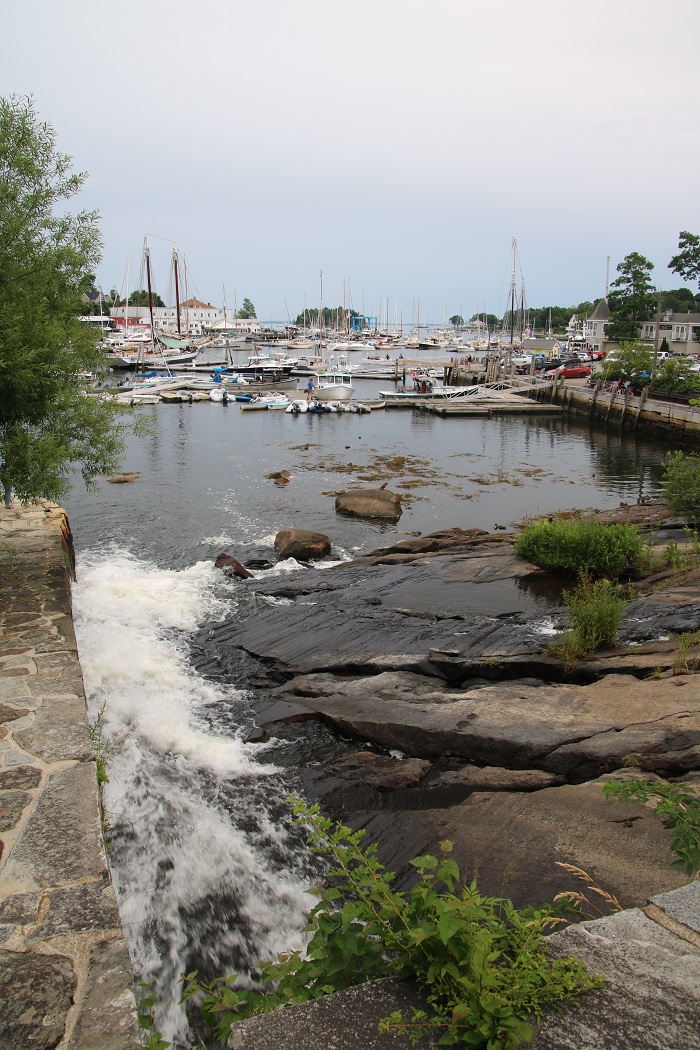 All of the traffic that heads for points east has to wind itself through the impossibly quaint center of town.  The buildings evoke an earlier, simpler time.  Well, it probably wasn’t simpler but that’s what we all say. 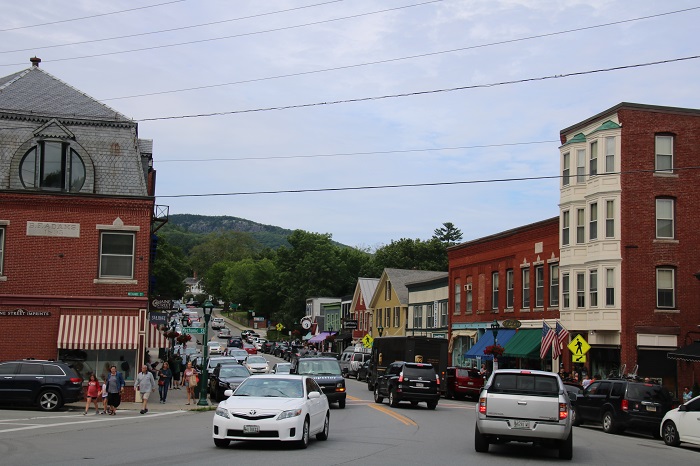 This is the Camden Yacht Club.  They host a “summer speaker series” with guest speakers, sometimes twice a week, on all sorts of topics.  I was thrilled to be invited to speak here as we’ve been coming to this friendly club for many years.  Our host Tom, was my sponsor and invited me to speak.   I really enjoyed the evening. 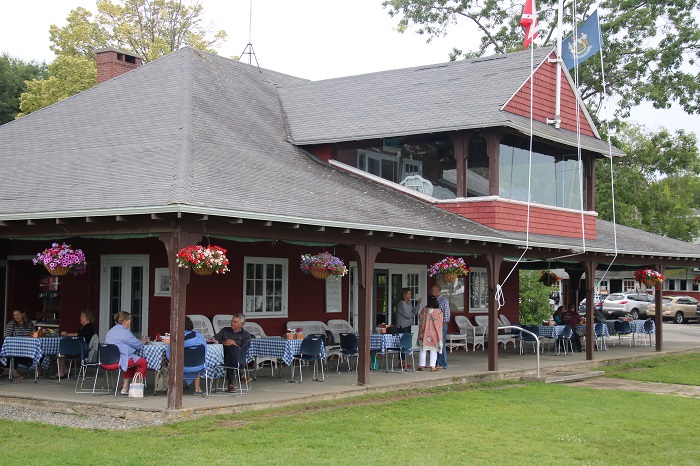 This view from the club, of the aptly named “Camden Hills” is beautiful in the afternoon light. 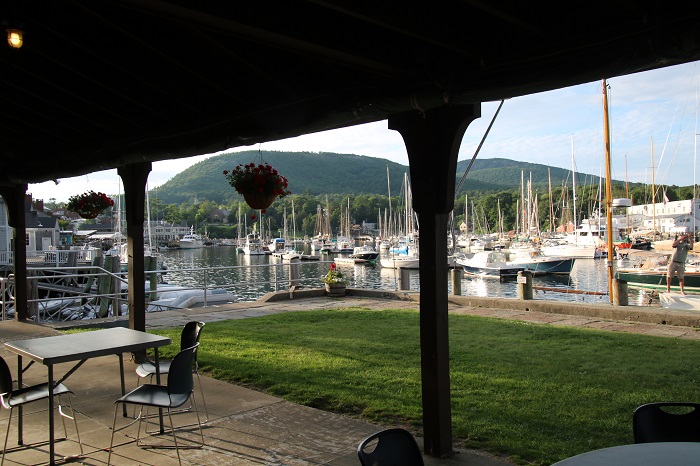 Over the winter I had also organized an event with another group that I am a member of, the Corinthians, their summer cruise wrap-up dinner at the ApprenticeShop in Rockland. 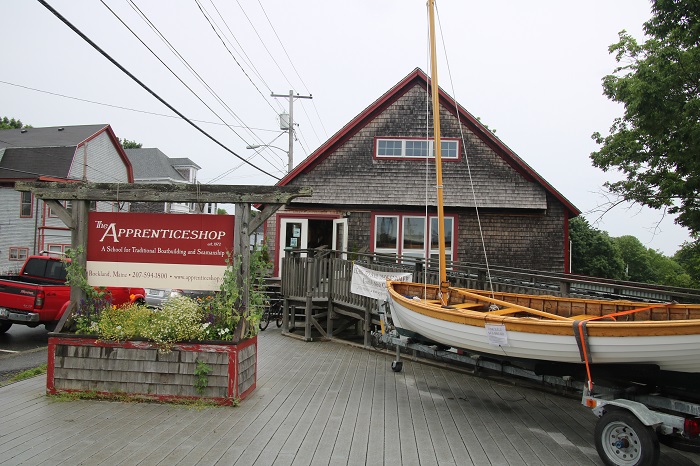 However, as I didn’t make it to Maine with Pandora, we weren’t able to stay and participate in the dinner.  Just to be sure that all was in proper order for the event, we visited the shop and met with my contact Liz and the caterer Jenn.  I was sad that I wouldn’t be a part of the event that weekend but wanted to be sure that all was set.   Reports were that it came off well.  No surprise there as Liz and Jenn seemed to be quite buttoned down.

Liz gave us a tour of the shop, where some lovely boats were being built.  The lines on this lapstrake rowing boat are sweet. 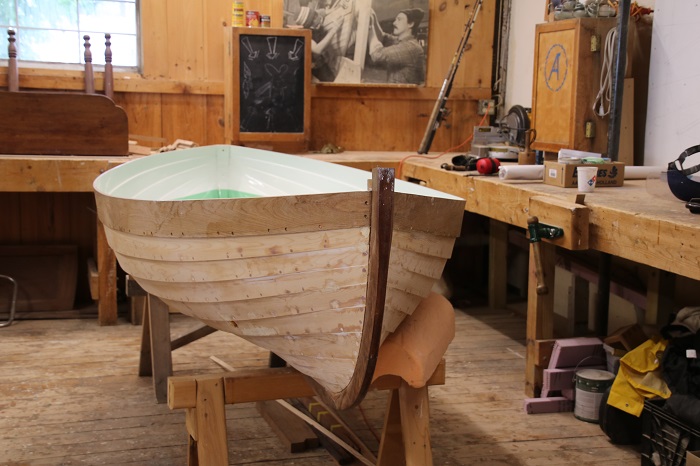 We were told that this boat, once completed, will be shipped to Europe.  There are a number like this being built at different shops, some in the US and some in Europe, to the same design, and they will all race together when they are completed, I think in Scotland. 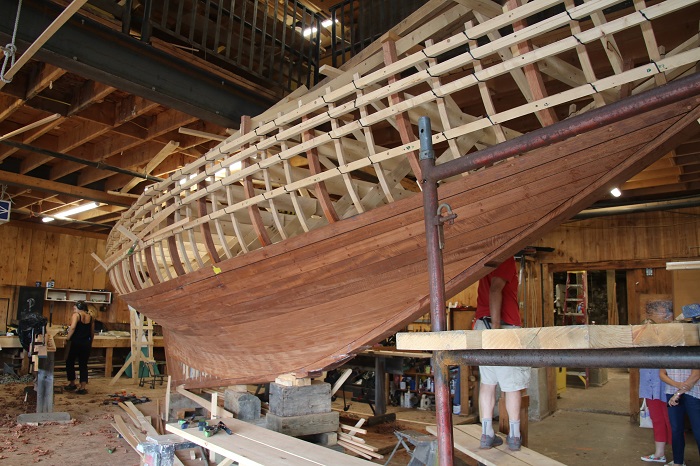 The ApprenticeShop is a place where students can enroll to learn a trade in wooden boat building and they have been successful over the years, with many graduates moving on to full time work in the business.  I understand that it is possible for “mature” folks, like me, to take a two month intensive course as well and that sounds like a great idea for down the road.  It’s not an inexpensive endeavor but you do get to take home a small completed rowing or sailing boat, which would be fun.   Something to think about.

After our whirlwind Maine adventure, we headed back to CT and Pandora to get ready for the arrival of our friends Karyn and George who were joining us for a few days of of sailing.  Originally, the plan was to rendezvous in Rockland but after bagging that destination, we agreed to have them come to Essex and spend a few days exploring before winding up our adventure yesterday in Wickford.

Our first stop from Essex was a short distance to Fisher’s Island, west harbor.   Fisher’s is an exclusive and mostly private island but you can go ashore and do some exploring.  The Fisher’s Island Yacht Club is always welcoming and we tied up at their dock. 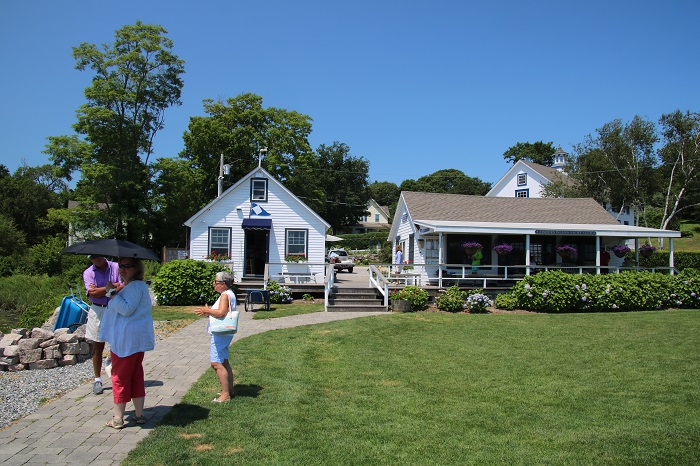 Interestingly, I had been introduced to the commodore of the club at the Essex Yacht Club the night before.  He and commodores of a number of other clubs were visiting with our own Commodore Klin for dinner.

As you’d expect, being late July and all, it was plenty hot in the afternoon and the girls went in for a dip.  They reported that it was bracing at first, and then quite pleasant.  I guess it was as they stayed in for a long time. 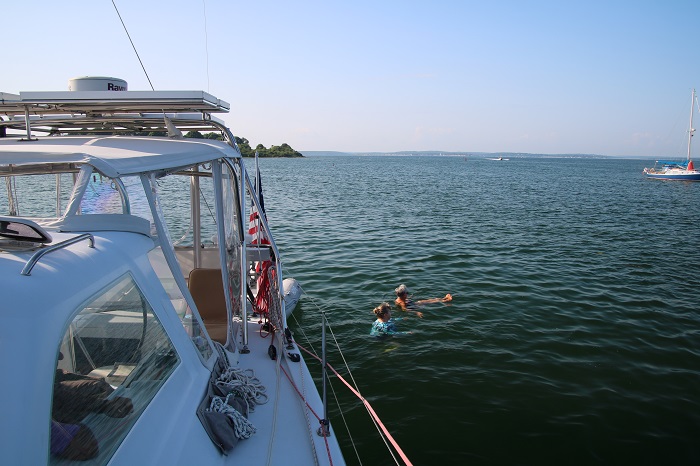 The prevailing winds in the NE are generally from the SW in the summer but, as luck would have it, not, the wind was blowing directly from the SE and Block Island, our destination.   After a frustrating few hours tacking toward Block and waiting for the expected southerly shift, I gave up and turned on the motor.    We picked up the Essex Yacht Club mooring which was open.

Along the way, as we went through The Race, the narrow cut that marks the eastern end of Long Island Sound, we were passed by a ferry.  Knowing if approaching ships were on a collision course has always been a source of anxiety for us but as Pandora now sports an AIS transponder, we were able to see the name of the ferry, contact the captain who said he’d pass us to our stern.  AIS is one example of how technology can indeed make life better, and in this case, way less anxiety producing. 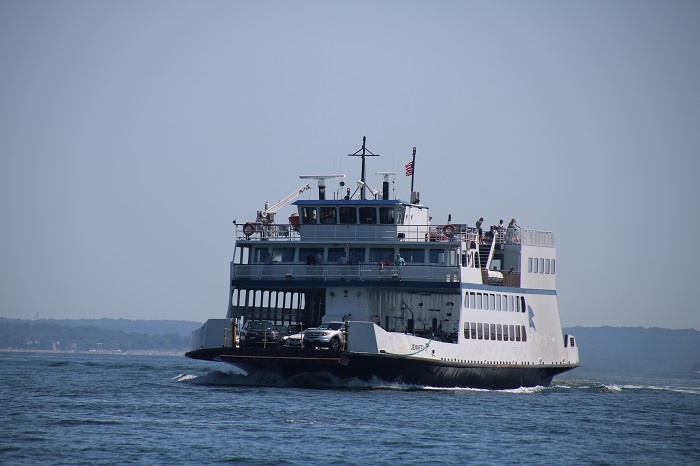 Snug in Great Salt Pond, we were treated to a perfect sunset. 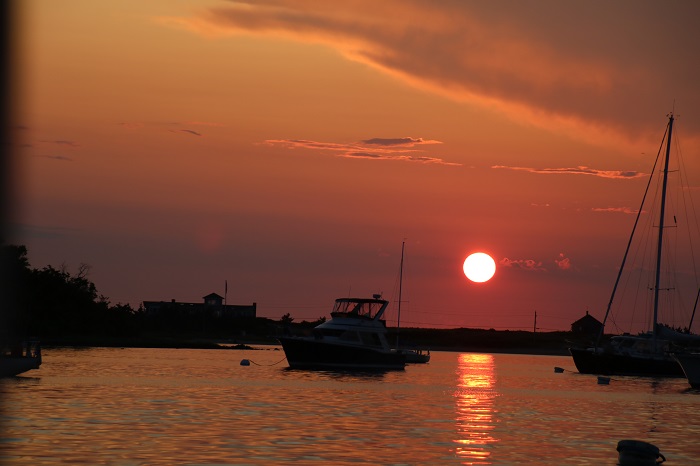 The Essex Yacht Club maintains a few guest moorings in popular harbors and it is a real treat to go into the harbor and pick up a mooring for “free”.   I say that as the rental moorings in Block are always full and there is a mad scramble to get one when a boat leaves, with those waiting in the wings zooming up with their dinks to claim their prize.

This old Navy tug has been someone’s home for many years.   Legend has it that the owner, when he purchased the tug years ago, sold the thousands of gallons of fuel in the tanks, yielding almost as much as he paid for the boat.  True story?  Who knows, but it’s fun to tell. 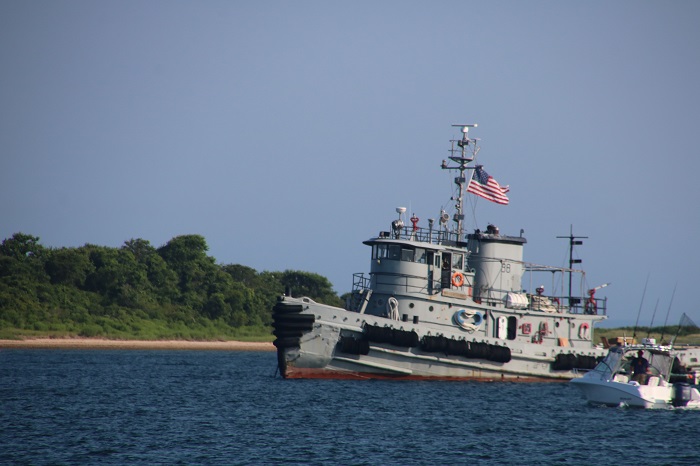 We were joined by our friends George and Bonnie and the six of us rented a van for the day and toured the island.  One of our stops was the North Light, a beautiful spot at the end of the most northern spot on the island.  In the distance, on a clear day,  you can see Point Judith. 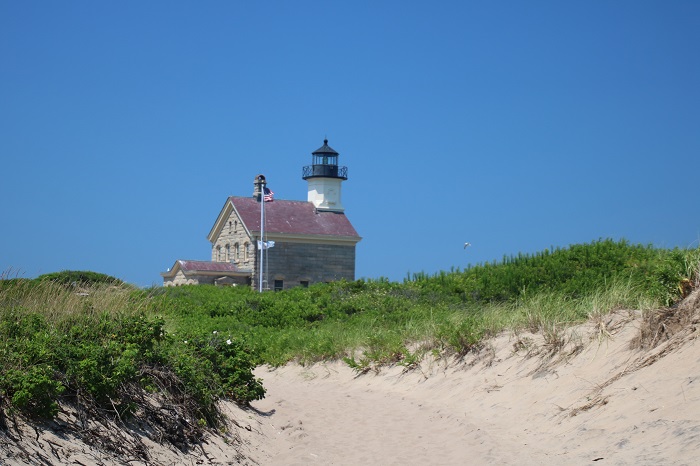 On the south east side, the now famous, and to some infamous, wind mills, the first of their kind in US waters.  I, for one, hope that they put out many more in the coming years.

These are huge, some 600′ tall from the seabed to the tip of their rotors.  Check out the sailboat on the right for scale.  We were told that the 5 generators in the “farm” put out enough power to serve some 17,000 homes. 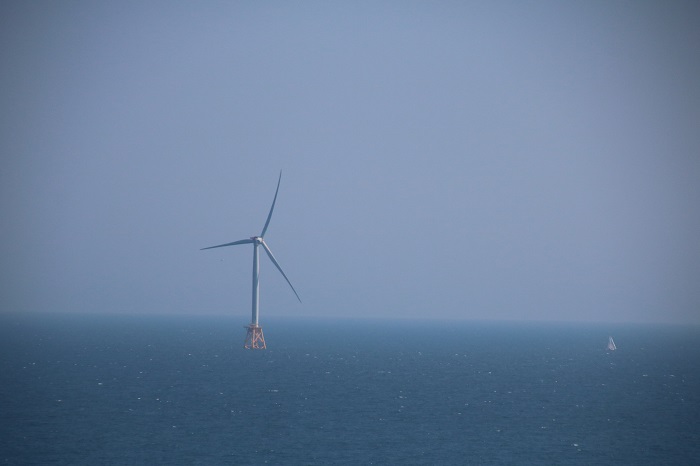 Along the way we visited, as you’d expect given the fact that Brenda and Karyn are knitters, a fiber store near a farm with all sorts of exotic animals including camels, emus and, well, other animals, a few in bronze.  Brenda and Karyn have been friends for many years.  This coming week Brenda will travel to Cape Cod to spend a week with Karyn who’s hosting a workshop. 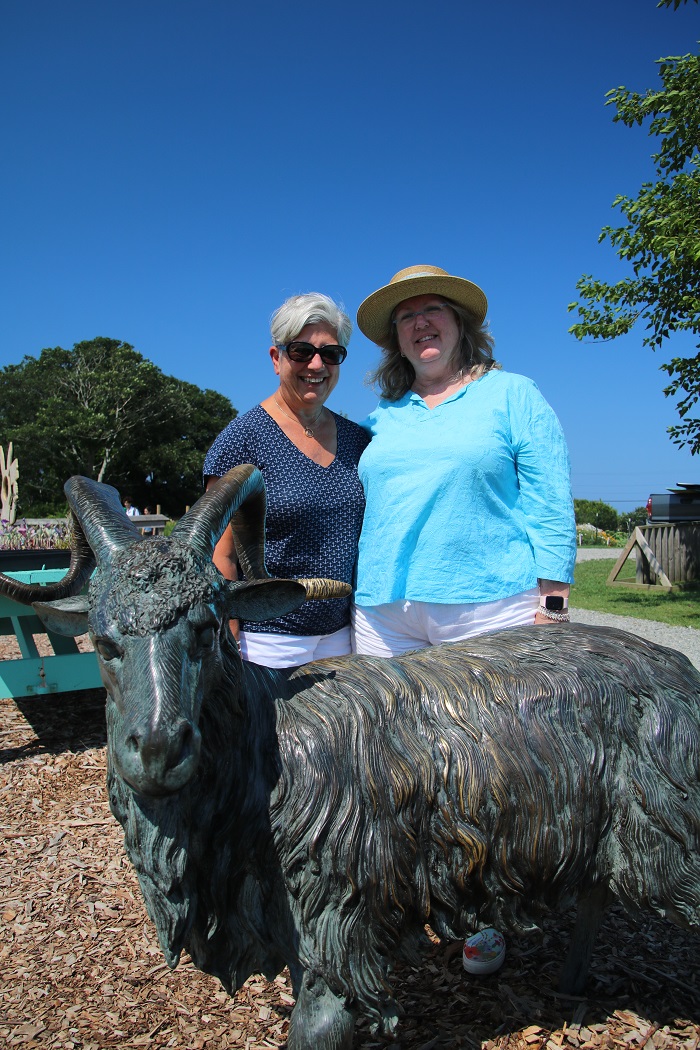 Beginning with a visit to rural Fisher’s and then on to the summer hot-spot of Block what better next stop could there be than Newport, home to so many beautiful yachts.  We enjoyed a stroll downtown followed by dinner ashore and then a harbor tour on our way out of the harbor yesterday.  I am always blown away by the scale of some of these yachts.  Even more amazing is how much of their time they spend tied up at in a marina.  It’s a small world and I have seen this one before. 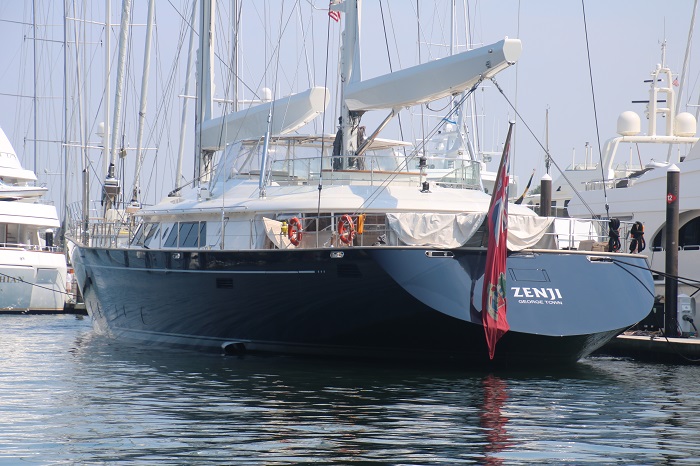 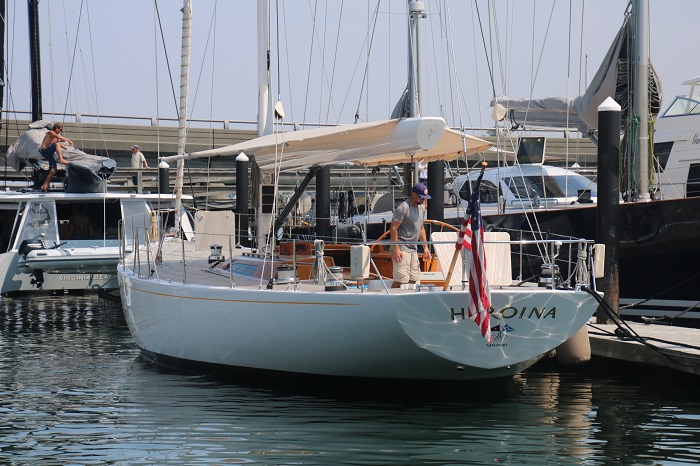 We passed Harbor Court, the Newport home of the NY Yacht Club, once the summer home of the Brown family that founded Brown University.  The family made their money running opium to China in the clipper ship days.  I expect that the family doesn’t like to be reminded about that sordid little detail in polite company these days.  Somehow that little bit of history doesn’t seem to attract the same justly deserved animosity as the current problems facing the Sackler family, the makers of Oxycontin that has fueled the tragic opioid epidemic.  Forgive the starboard list as I was snapping shots while dodging moorings in a crowded harbor. 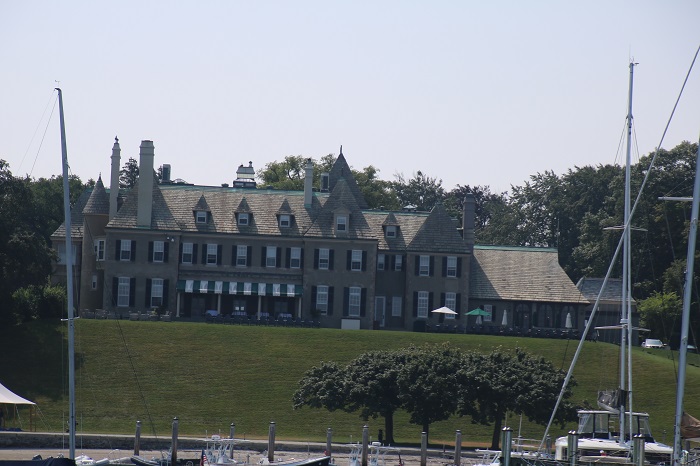 As a side note, Pandora will serve as “tender” to another boat on next week’s NYYC  Cruise next week and I’ll be attending the opening event of the week at Harbor Court next weekend.  Stay tuned for more on all that.

As we made our way through the harbor I was struck by this family swimming off of their classic motoryacht.  What fun and said “summer” to me. 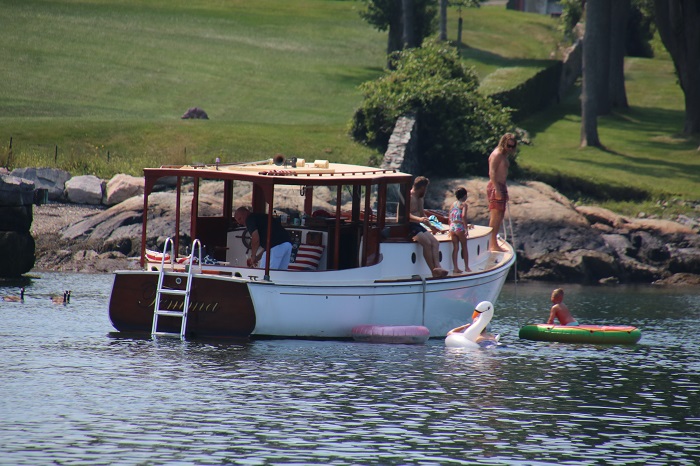 So here I sit, the sun is just peaking up over the horizon in scenic Wickford.  Not a bad view to begin the day.  Yes, I know, that starboard list again.  It was 05:00 and I hadn’t had my first cup of coffee yet. 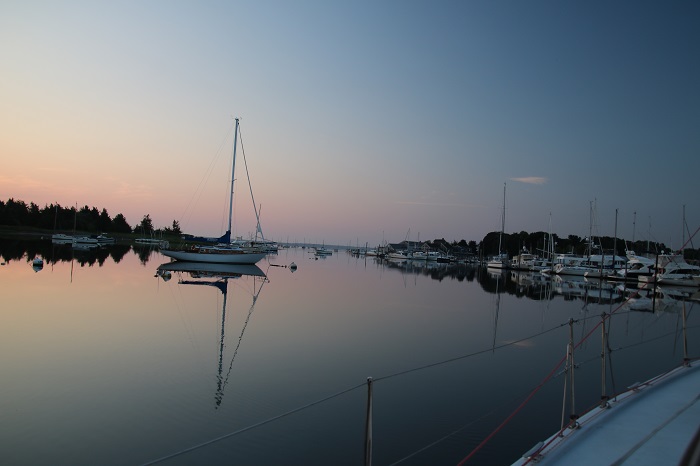 It’s nice to be aboard again and on the move.  Yes, it’s not Maine but it’s not so bad.

It’s going to be hot today.

2 responses to “Not in Maine but not so bad.”