On Friday, we left the marina in Chester to head out and begin our long delayed trip to Maine aboard Pandora.  I say “long delayed” because THE CANVAS GUY ran the headliner project all the way to the hairy end, finishing up, mostly, at 20:00 hours on Thursday night.

While he made the “final” deadline, I swear that every time he set another deadline and promised he’d be done, he just blew past it only to set another “don’t worry, I’ll make that” one, soon to be broken.  Yes, I understand that he had committed to too many jobs but it was pure torture to work toward a deadline, only to learn at the 11th hour that the work had not progressed at all.  This happened time after time and was just exhausting.

Another issue is that Pandora is a complicated boat and after sitting on the hard for such a long time (my last log entry was a trip to Sag Harbor June 6th 1018, over a year ago) all sorts of Gremlins crept into the picture, having nothing to do with the delayed canvas work.  These problems were discovered as I methodically tested each system in preparation for heading to Maine.

So the time had finally come and we headed out of the marina on Friday morning all ready to go.  As we cleared the marina I decided to check, one more time, I thought, all of the electronics including the radar and surprise, no radar.

Now, before you say something like my friend Chris, who feels that since generations of mariners sailed around the world without radar, that I should not rely on all that “newfangled” stuff and just keep it simple, hear me out.   Yes, simple is good and, I’ll agree that having three electric pumps on each of our heads seems a bit overly complex, but having the ability to “see” in the fog in a place, Maine, that is nearly always foggy and strewn with big hard rocks, is a must.

Besides, the coast of Maine is littered with the remains of hundreds, no make that thousands of shipwrecks and I have no interest in supplying the next one.  So, no trip to Maine until the radar is fixed and we stopped as we passed the Essex Yacht Club and pulled up at the dock with the hope that the “electronics guy” could fit us in on short notice to solve the problem.

The electronics guy was kind enough to come to my aid on Friday afternoon and after about an hour declared that he thought that it was most likely a cable problem.  Why the cable decided to fail, just like that, is a mystery but that seems to be what happened.   However, it wouldn’t be possible to fix it till the following week.

A few days delay is generally not a problem but in this case I had delayed using Pandora as long as I possibly could to keep her available for the canvas guy to do his work.   So, with all the delays, last Friday was just about the last day that I could leave for Maine.  Sure, if it hadn’t been a Friday, perhaps the repairs would have happened the next day but with the weekend looming, a departure on Tuesday was just not possible so no Maine this year.

Not to be deterred, I talked to my crew about an alternative.  How about going cruising for a few days?  So, off we went, arriving at West Harbor, Fisher’s Island at dusk where we picked up a mooring.

The next day, off to Newport, mostly because that was the best option given the wind forecast.  As we approached the harbor we saw more than a dozen 12m sailboats, past defenders and challengers for the America’s Cup, all participating in the 12 Meter Worlds, the largest assemblage of class boats ever.  They were everywhere.   What a sight.

Everywhere you looked, these beauties were being towed out to the racecourse.  It was amazing to see all these iconic names and all out on the course at the same time. 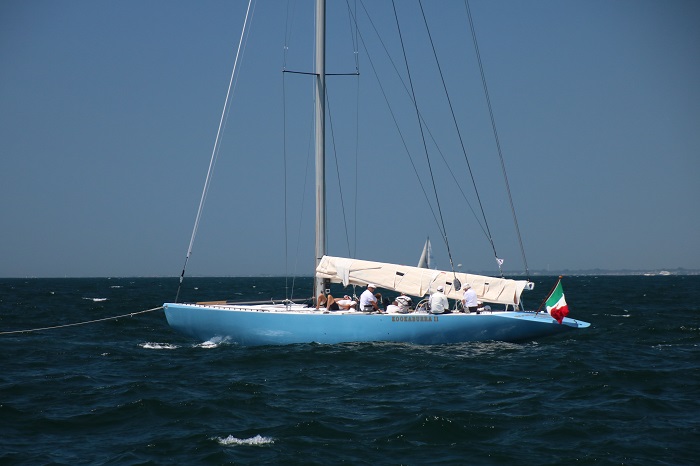 These are remarkable, powerful machines. 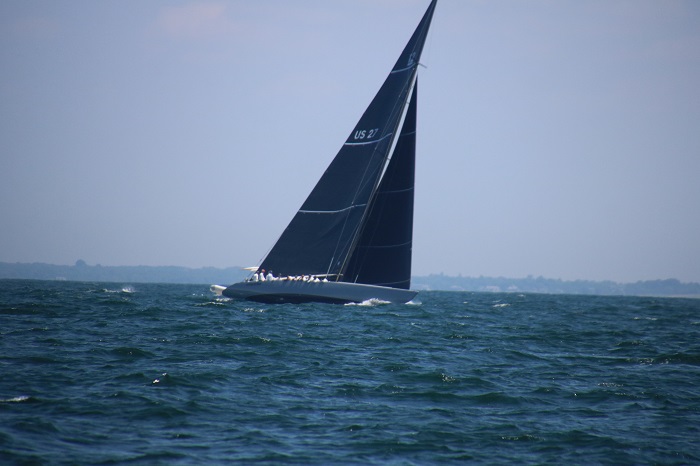 And the spectator boats, none the less impressive.   I loved the lines of what is probably an old Huckins.   What an elegant, classic yacht. 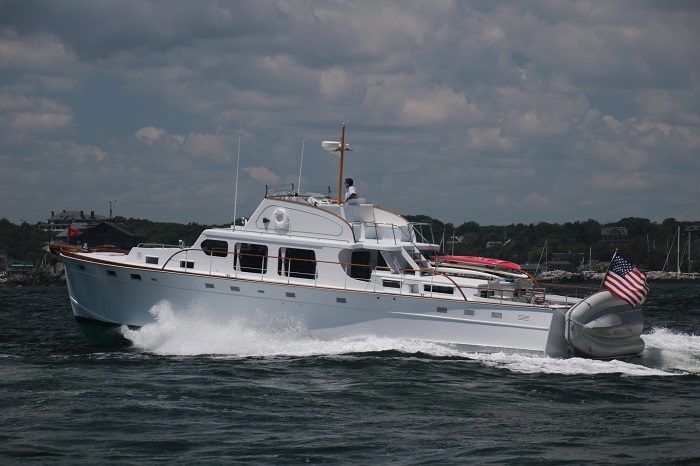 Of course, where there are big money yacht owners, there is a photo chopper, flying over the fleet documenting the excitement.  Later at the awards dinner they would be selling their work to excited owners and crew even more enthusiastic after a few drinks. 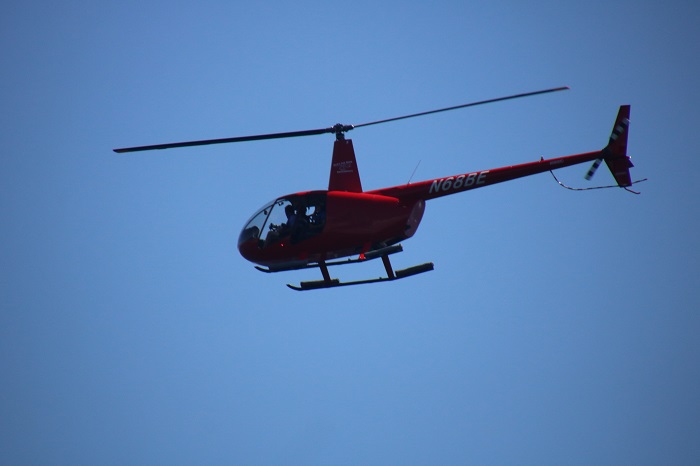 As we approached the harbor we passed Brenton Point, the day’s site for a kite flying contest, it seems.  What a sight. 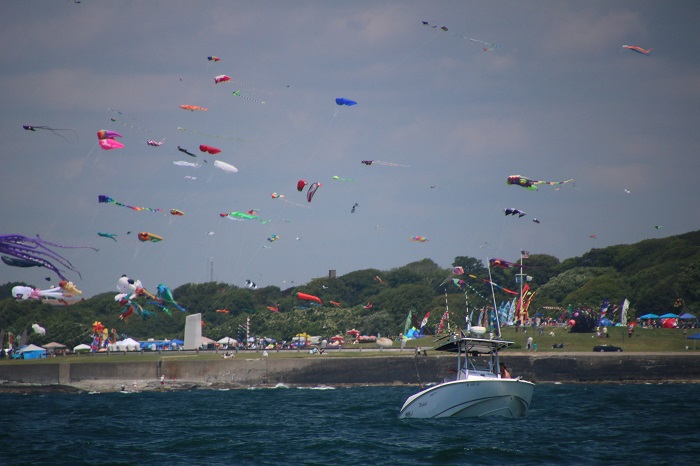 As we passed, I was struck by some of the particularly large kites like this octopus and whale.  I wonder how hard it is to hold on to such a huge kite. 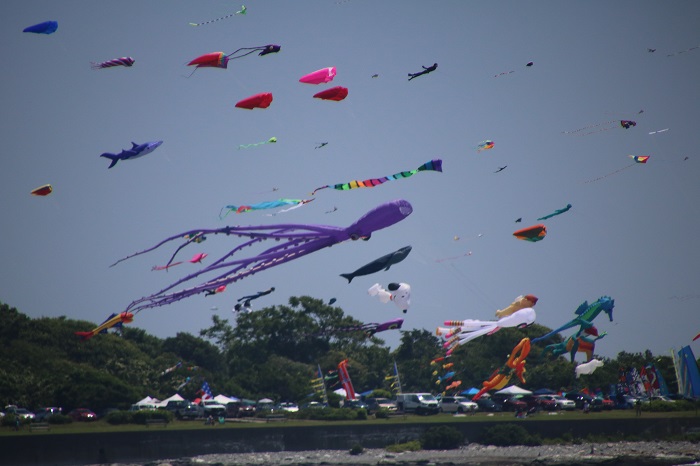 Of course, what better spot to watch all the fun than from the lawn on one of the historic inns?  “Jeeves, I’ll have another gimlet, and make it snappy.  Muffy will have a third mimosa while you’re at it good man.” 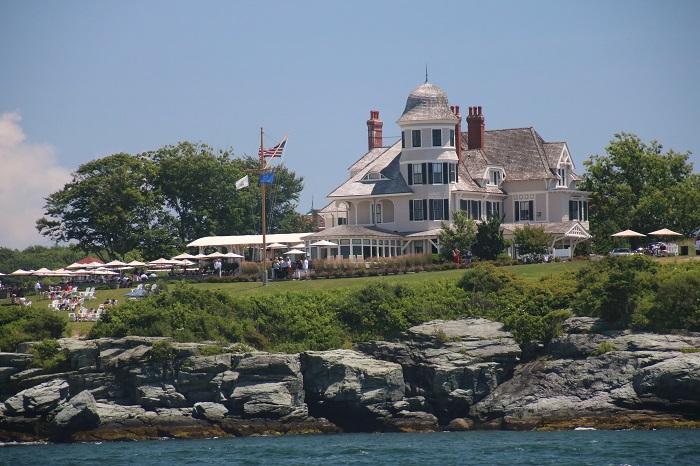 There’s clearly no shortage of money in Newport where a “dink” has over 1,000 HP.  How about one with four outboards? 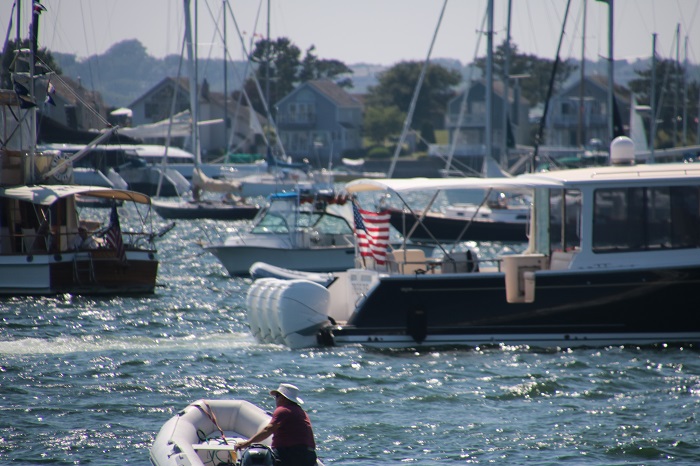 The evening festivities for the regatta were to be held at the International Yacht Restoration School, known for rebuilding small boats all the while teaching a new generation of builders and restorers the art of wooden boat repair.   The most popular design for the school is the restoration of Beetle Cats, and there are plenty of tired hulls to choose from.  Buy an old boat, they will fix it up and sell it to you.  Easy! 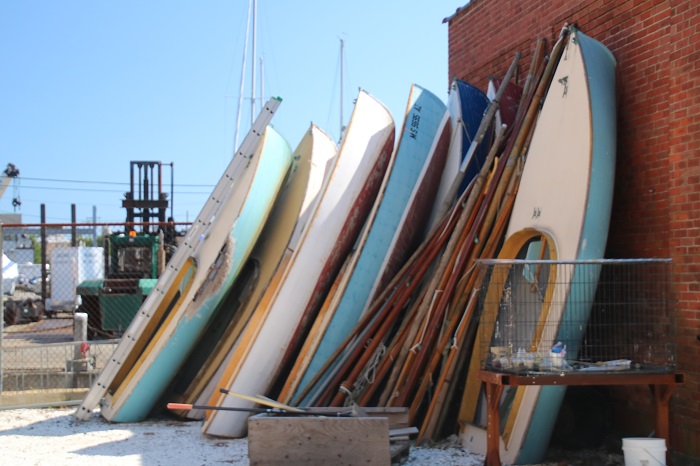 So there you have it, a failed run to Maine but all is not lost.  I’ve already spoken to Brenda about moving plans around so that we can do a bit of cruising and enjoy what’s left of the summer before I head south in the fall.

As I write this me and my crew, none to the worse for wear, are enjoying time in Block Island.   This was our view from Pandora last evening while we watched the sun set. 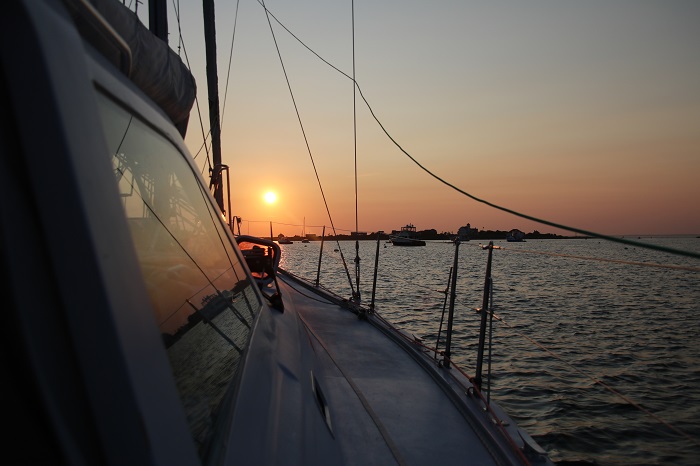 Oh yeah, and about that headliner.  The canvas guy might think he’s done but oops, not quite as there more than a few details that seem to have escaped his guy’s attention when he finally stepped onto the dock from Pandora on Thursday evening.   I’ll be calling and I’ll be sailing.

In that order?  Hard to say but I WILL BE SAILING.

Busted or not, life isn’t all that bad.  No indeed.