It’s June 15th and Pandora is on the hard.   That’s no surprise as it’s what I had planned, working toward a late June launch.  I wasn’t expecting to use her much before I headed to Newport to hook up with the Salty Dawg, Down East Rally so what’s the rush?

However, all of a sudden getting her ready became a huge rush.    What changed is that I discovered, mostly by accident, that the lower rudder bearing was damaged and needed to be replaced.

I noticed the problem when I was cleaning up the running gear in preparation for painting the bottom a few weeks ago.  At first I wasn’t exactly sure what I was looking at but it became clear to me that things were not quite right.  In the past, the white plastic ring was snug against the bottom of the hull, keeping the bearings in place and now it wasn’t.

It’s hard to see what I am talking about as the problem was quite subtle. 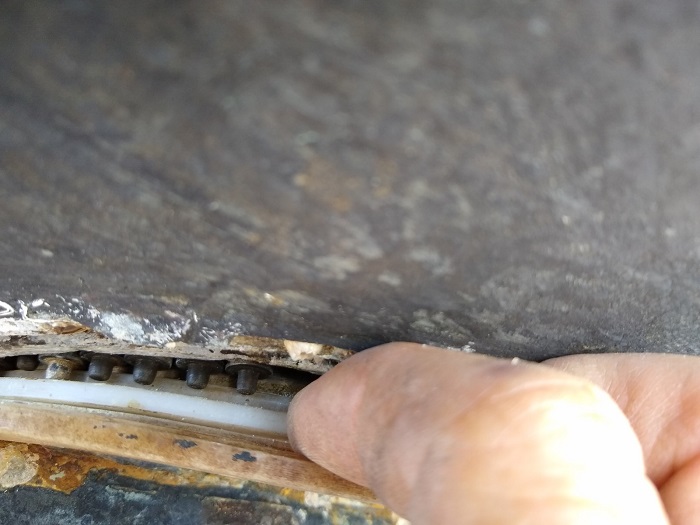 To give a feel for what that photo is illustrating, this is a photo of a similar bearing assembly, a structure that is affixed inside the “tube” that the rudder shaft goes through.   This assembly is secured inside a fiberglass sleeve and the rudder stock goes inside the bearing. 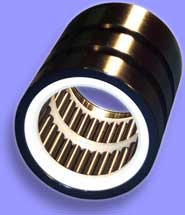 So there I was, a looming launch date, a bad bearing and nightmares of  being 500 miles from shore with no rudder.

Unfortunately, Pandora was in a yard that did not have the facilities to pull her rudder.  The only way to remove the rudder assembly is to lift the boat up high or suspend her over a pit so that the rudder could be dropped down below the boat and removed.  That’s a challenge as the rudder shaft is quite long and extends well up into the boat, all the way to the cockpit sole.  To get it out the rudder has to be dropped low enough to have the upper part of the shaft clear the bottoom of the boat.  This means that there has to be a 10′ depth from the ground to hull to drop everything low enough.

So, I had to move her to another marina for the work to be done.  Last Tuesday she was launched and I immediately headed over to Pilot’s point marina in Westbrook where she was hauled the next morning.  She was in the water for less than 24 hours before she was out again.

They pulled the rudder the very next day.

Here she is, rudderless.  Better without a rudder on land than 500 miles out to sea.   The metal plates below her cover the “pit”.  When the pit is uncovered the rudder can drop down low enough for the top of the rudder post to clear the hull.  I didn’t see the rudder which is now in the shop.  Photos to come. 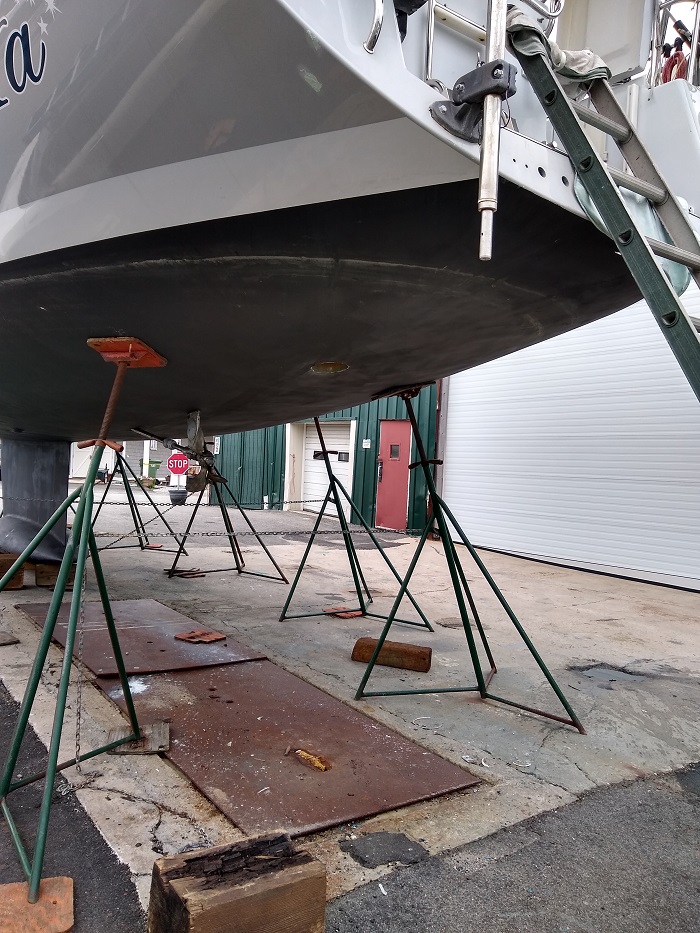 After hauling her they got right to work, removed the rudder, took measurements and ordered the new bearings the very next day.  Good thing they were quick about it as the parts come from Denmark and are machined and assembled to order.

Not much left except a big hole while we await the shipment to arrive. 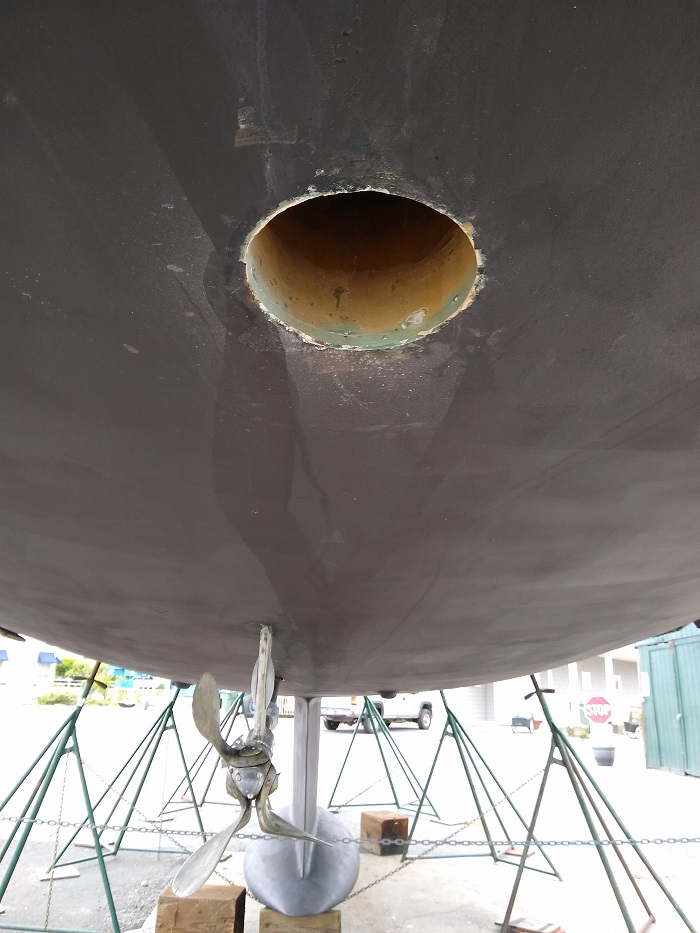 This is all that is left inside with the shaft gone and steering quadrants removed. 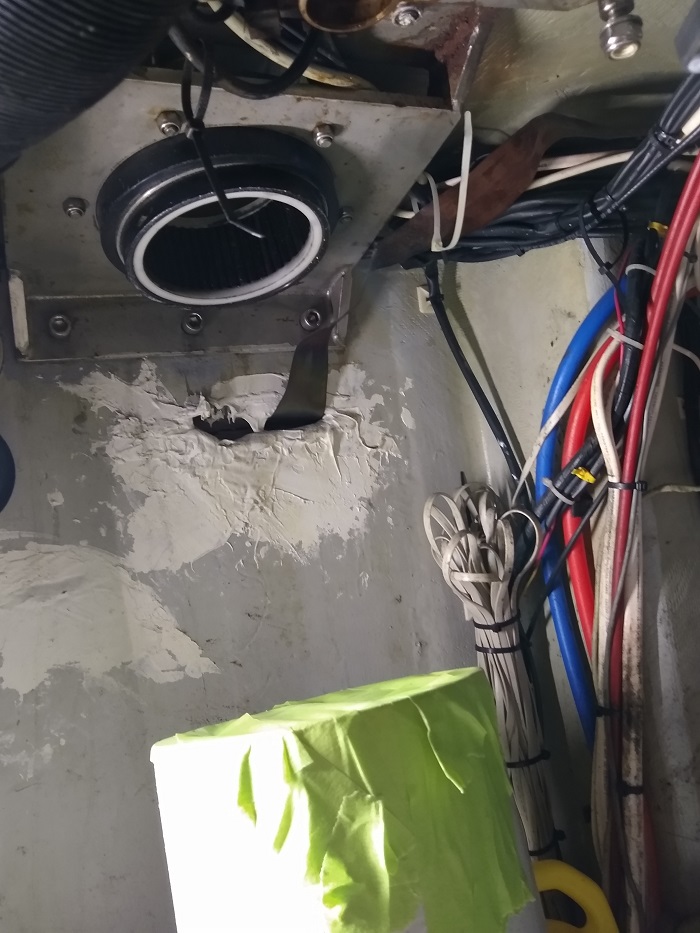 Looking up you can clearly see the upper bearing which is still fine. 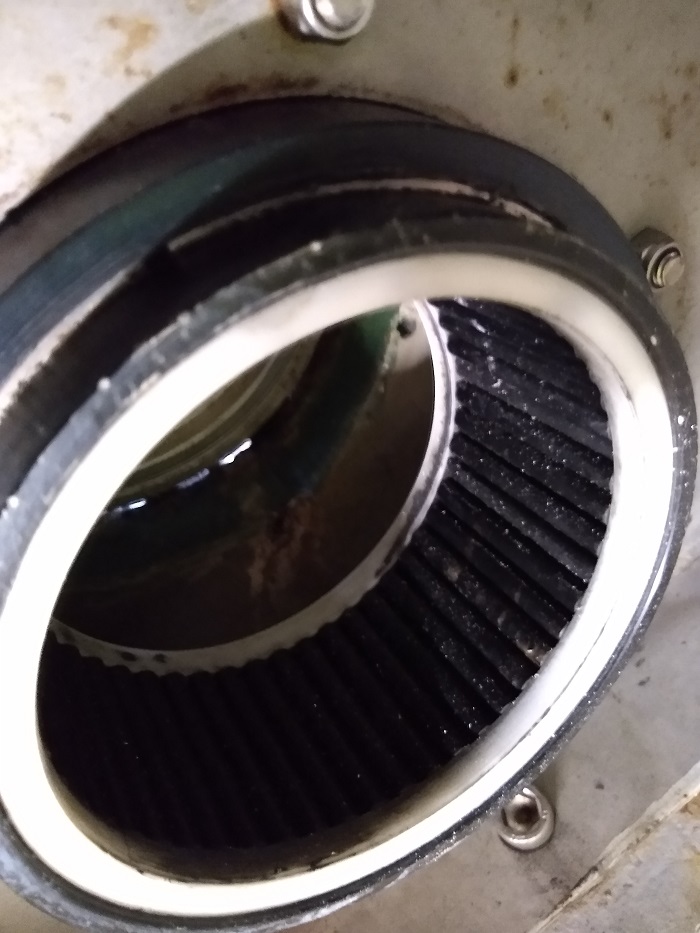 Denmark is a long way from CT and it will take a few weeks to get the parts here.  I sure hope that the yard took VERY CAREFULL measurements and the new parts fit on the first try.  The tolerances are very critical.    To make matters worse, the parts were expected to arrive from Denmark on July 1st and due to the holiday, they won’t be able to install the parts until the 5th.  That’s only a few days before I have to leave for Newport.  No time for delays.

The service manager Kip is being very supportive and instructed the  manufacturer on how important it is to get the parts on time, saying that “money is no object” with regards to shipping.  Easy for him to say…

Well, it’s no object as it relates to a box that will only way a pound our two.  We will see how that works out.  When all is said and done, I expect that the shipping cost will end up being a rounding error on the job.

As of yesterday I learned that the bearing would ship sooner, perhaps today and be in hand by the end of the week.  That’s good news.   The bad news though is that I vastly underestimated the cost of the bearing.  I won’t say except that it had better be beautiful and easy to fit to the boat.  Silly me, I thought that the labor to handle the job was going to be the bulk of the cost.   NOT!  This is an expensive little bugger.

We have all heard horror stories about how hard it is to get work done on boats, especially recently with boating participation up sharply, and it’s nice to work with a yard that is so supportive.  It didn’t hurt that Brian, the GM at the yard in Deep River where I have kept the current Pandora and her predecessor for nearly a decade, contacted the GM at Pilot’s Point and asked them to be good to me.   Thanks Brian.

All of this is so carefully timed so there’s not much room for error or the whole plan caves in and 30 boats in Newport will wonder “where the Hell is Bob, our rally director?”

Yes, I do need to be there on the 10th, as planned but now it’s looking a bit more likely.  And, it’s also time to begin provisioning the boat for the run to Maine.  I’ll be purchasing all sorts of stuff to put on board when she is back in the water.  Will that be next week?  Wishful thinking?  Time will tell.

There are other projects in addition to the rudder, like painting the inside of the dodger that will have to wait until another time.  However, the hull will be polished and the scratches fixed so that her paintjob will again look brand new.

I have written about a number of “scrapes” that Pandora has endured over the last few years so it will be nice to have them fixed.  I had planned to do the work myself but decided that it made sense to just hire it out and ensure that it’s done right.

I guess that’s about it for now.  The big stuff is well underway and I too have plenty to do to get her ready for the season.   And that’s important as I don’t plan to have her hauled again, I HOPE, until sometime next summer for painting and perhaps time on shore while we get ready for our next adventure, whatever that is.

So there you have it,  launch, haul, launch repeat?  Oh, I sure hope not.

Of course, it is a boat, Break Out Another Thousand, so all of this is par for the course.  And, it’s beginning to look like the emphasis will be on “another” and I guess another, and another…