Winter is on it’s way and a few days ago I moved Pandora to the yard in Deep River CT where she will be hauled.  It pains me to have her out of commission for the “season” but that’s how it will be.

As I ran her up the river, it was a beautiful fall afternoon and I couldn’t resist and asked Brenda if she would be willing to head out one more time for a short run  to Sag Harbor.  She agreed so I put off the haul date a bit and here we are again in Sag Harbor, where I write this.

We had an easy run here yesterday and were able to sail at least part of the way, a nice way to end the season.  We will head back to the marina in Deep River tomorrow where I will prepare her for being hauled.  It’s nice to have at least one more outing before the season is officially over.

The harbor here is much more empty than when we were here only a few short weeks ago with all but two of the big yachts gone for the season.

As Brenda and I sat in the cockpit last evening enjoying a G&T we were treated to the view of Patriot, a beautifully maintained classic Trumpy yacht steaming by.  It  seems that she is for sale and at $350k, if you are interested.  And, at that price, she won’t break the bank.

However, anyone who knows what it costs to maintain a classic yacht, will realize that the purchase price is only the beginning as I expect that it’s a multi six figure yearly commitment to keep her going which would surely break our bank.  It’s expensive enough to maintain Pandora and I can only imagine the complexities keeping a near 100 year old yacht in proper trim.

And, maintenance is only the beginning and assumes that no major work needs attention.  She was built in 1926 and has been heavily rebuilt over the years, most recently over a 5 year period ending in 2009.   I expect that she’s ready for yet another round of major work about now.   One way or the other, what a sight as she passed by a lovely schooner in the waning light. 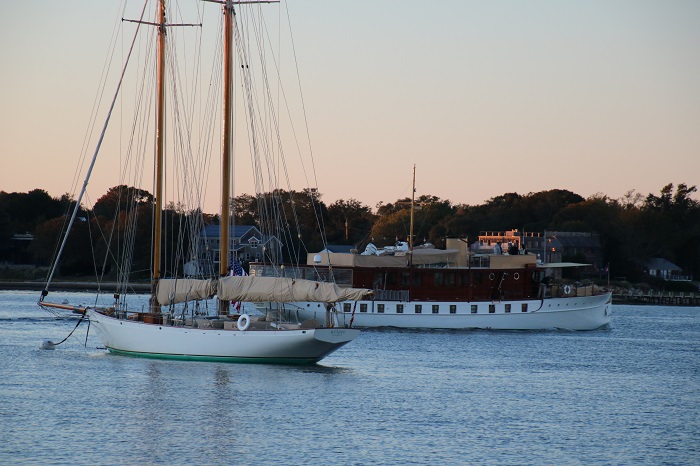 The schooner is Kelpie, built in 1928 in Maine.  She too underwent a major rebuild, as is the case with all older yachts, in Maine in 2014 so she is in terrific condition.  She now calls Sag Harbor her home and is available for charter.  I wonder if she will be here over the winter.   Want to go sailing on a classic schooner?  Check out her website here.

Anyway, with the season at an end I continue to think about what life is going to be like here in New England this winter, wondering how bad things will get as people move indoors and tire of coping with the seeming never-ending restrictions required to stay safe.

On a daily basis experts are making predictions of what will happen in the coming months.  It’s hard to know what to believe when reports from medical experts suggest that the worse is yet to come, and others suggesting that the worse is behind us and that the virus will just magically fade away.

And, to add to uncertainty, the questions about vaccines in development and a growing fear that many will not trust them as safe or even protect us from infection.  One way or the other, it’s going to be a long winter.

And, speaking of winter and our missed run south, I have been working hard to arrange plans to celebrate the arrival of the Salty Dawg fleet in Antigua.  Unlike here in New England, it is fairly easy to stay “safe” as just about everything you might want to do in Antigua will be outdoors and with a fresh breeze to further minimize risk.

Last year we had nearly 40 boats make the run to Antigua in the rally and in spite of the world being in the clutches of the Pandemic, it looks like we will have a similar number of boats, perhaps a few more than last year, making the run this year.  Interestingly, two thirds of the fleet this year are first-timers, about double the fraction of what the rally sees in a “normal” year, suggesting that “veterans” either left their boats in the Caribbean last summer or have opted to sit the season out, given all of the uncertainty.

One question is if it will be safer in the Caribbean than here at home, and I find it very distressing that here in the US, we have the highest death rate of any industrialized nation at nearly 70 per 100,000.  On the other hand, the death rate per 100,000 in Antigua is a fraction of that at 3.  These are sobering numbers with our death rate more than 20x worse.  So, who’s the third world country?  As Trump would say “sad”.

Earlier in the week, Brenda and I went out for lunch, on a patio overlooking the CT River.  It was a beautiful day and really brought home just how different it will be here in a month when we are no longer able to sit outside to enjoy a meal.  It’s going to be very different and I can say with certainty that there is no way that I will be comfortable dining indoors, social distancing or not, once it’s cold, as there is ample evidence that being inside, in a public place, social distancing or not, as it is much more risky.

While we have more hospital beds here in the US, the to care for us if we get sick, the government of Antigua has been taking a very aggressive approach in keeping the virus at bay by having forced quarantine in government facilities.

They realize that if things get out of control, they just won’t be able to cope.  Or, to put it another way, “In God we trust, all positives go into quarantine where we can keep an eye on you!”.  I doubt that would fly here in the US, land of “don’t tread on my liberties”.  So, where would we be safer?  In the US with 20x the infection rate and lots of hospital beds or in Antigua with minimal healthcare risk but less risk of infection?  It’s a tough call.

One of the best parts of visiting Antigua is the availability of other islands to visit only a short sail away.  However, this year there are still a lot of questions about what will be involved in moving from island to island, with the likely need to take  a PCR test at $100 per person, just to move to another island.   That could really add up over the course of a season where a cruiser might visit as many as 10 countries over the course of the season.

Some of the islands, basically the non-French islands, have formed a sort of “bubble”.   The idea is that residents of those islands can move more freely between their home and others in the group with a minimum of effort.  However, for cruisers, non-nationals, it’s not all that clear with evidence seeming to suggest that cruisers will need to show a negative test, in or outside of the bubble islands.  At this writing, those wishing to travel within the “bubble” will still have to provide proof of a negative PCR test, regardless of where they are traveling from.

There is indeed a lot of question as to how things will evolve in the coming months and if it will be better to remain close to medical care here in the US or to bail for warmer climes.  I guess only time will tell which approach proves to be correct.

On a brighter note, recently our son Chris and his partner Melody, who have moved in with us for the winter (and yes, it’s going very well, thankyou) were aboard for an evening cruise and were witness to an amazing spectacle,  the swarming of swallows over the marsh. 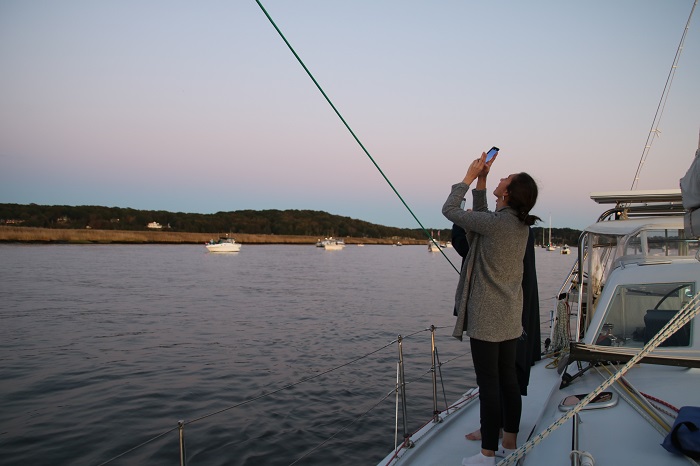 What begins, as the sun sets, as hundreds of black specks… 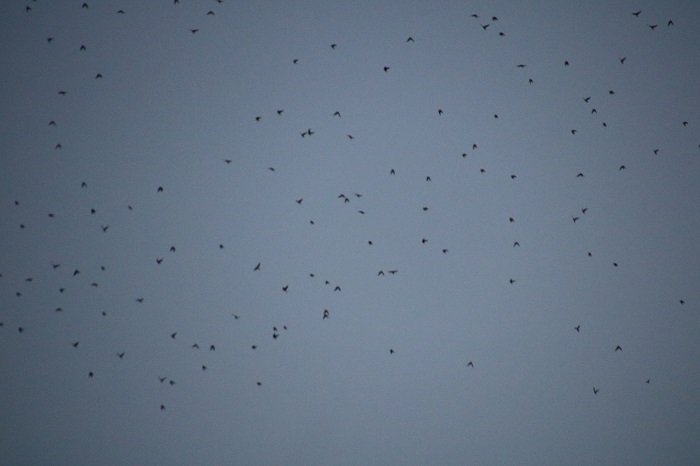 Turns into swirling clouds of hundreds of thousands… 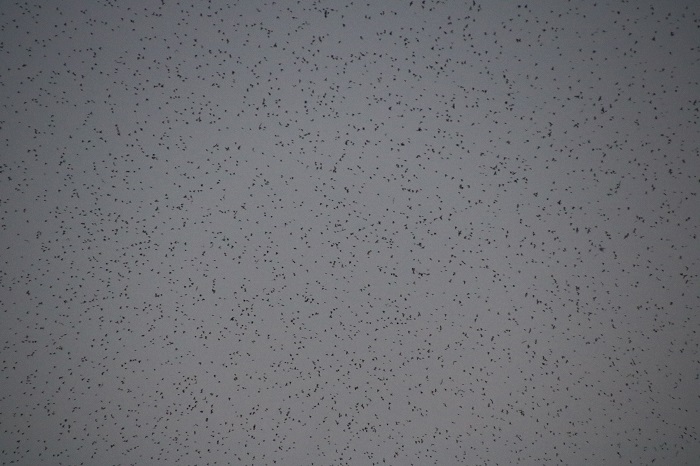 They swoop and dive in elegant sweeping clouds before diving down into the marsh for the night.  Soon they will head south and in spite of all of the uncertainty about what the coming winter will bring, seeing this natural wonder offers hope that as time marches on seasons will come and go and we too will eventually find a new beginning with life returning to some sort of normal.

Yes, time will tell but for the time being, tropical or frozen, it’s going to indeed be a Coronavirus winter.