The sights, sounds and smells of Georgetown SC.

It’s Wednesday morning here in historic Georgetown and it’s going to be a lovely day indeed.

This will be our third day here and it’s going to be tough to leave.  The town has a lovely waterfront area including a boardwalk that runs down the length of this tiny harbor.  Speaking of tiny, we are anchored off of the town dock which is very nice and convenient.  However, the harbor is so narrow that we have had to re-anchor more times than I want to admit as each time the wind shifts, and shift it does, we have to up and reset the hook so that we don’t end up too close to some boat or dock as we shift to a new direction.

And to make things even more exciting, the wind has been coming from a variety of directions and it really pipes up each afternoon so that our chain is stretched tight, making us feel that if our anchor shifts (drags) in the soft mud bottom even 20’ that we will end up too close to something hard and pointy.   We prefer not to be really, really close to “hard and pointy”.

So, aside from the “having to re-anchor” thing, it’s really a lovely spot.

Georgetown is a town of “contrasts” with beautiful homes and old civic buildings as well as a nasty steel mill (are there steel mills still in the US?) and a stinky paper mill to boot.  To look in one direction you see a beautiful waterfront and turn your head and you’ll see the paper and steel mills.  Not so beautiful.  And, when the wind comes from the “right” direction, the paper mill smells like a stale brewery.  However, for us, the good definitely outweighs the bad.

For the two days we spent motoring here from south of Charleston, we have “enjoyed” some really shallow spots.  Because of the high tides, around 7’, along the 70nm run, you can use the tides to get over the shallow spots but that means making the run on a rising tide.  And that meant that we had to time our departures each day to coincide with rising tides which meant that sometimes we had to wait till mid morning to depart which somewhat restricted out travel time and distance before the sun and tide went down again.  However, we made it and here we are.

About 10 miles south of Georgetown, we anchored along one of the canals in a lovey windy creek nestled in rice fields.

The view was spectacular with birds everywhere, including a bald eagle perched on a tree that watched us as we motored by. 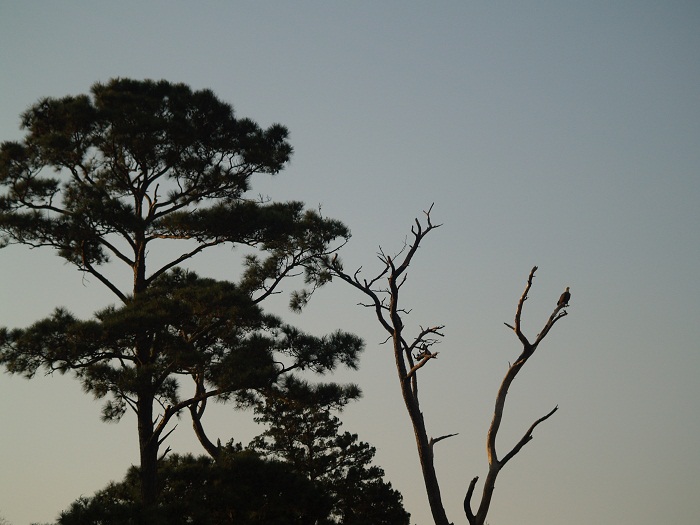 After a while he took flight and circled us.  A bit blurry, perhaps because I wasn’t quite awake yet but impressive, never the less. 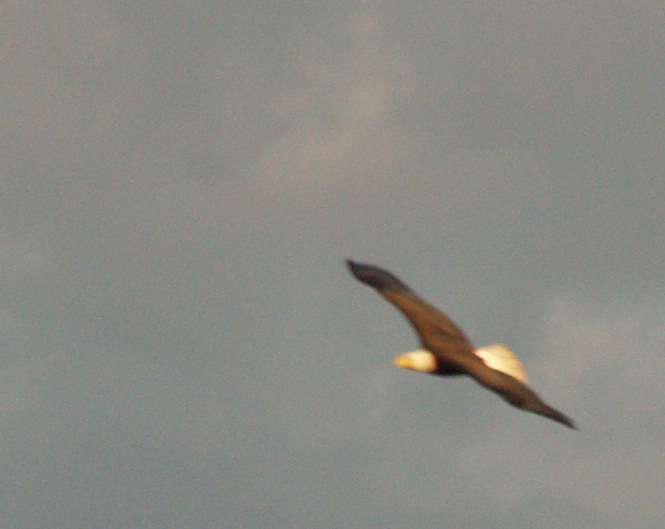 The canal is as straight as a highway.  However, you don’t get this sort of “big sky” view on just any “road”. 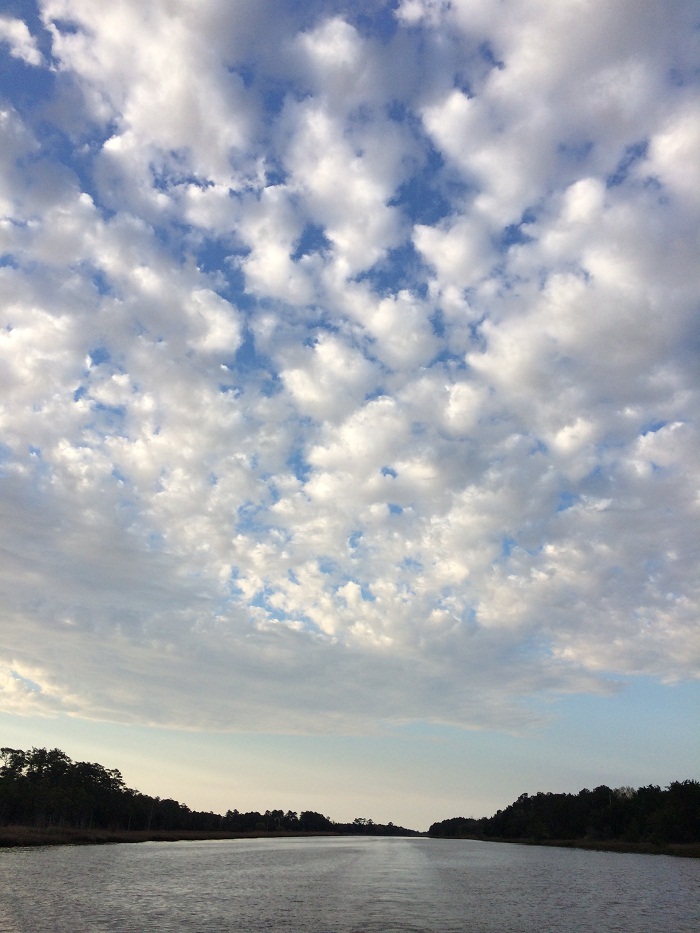 I can’t say that it’s clear to me what the purpose of this watch tower is but I expect it has something to do with the rice fields.   It looked pretty nice in the early morning light. 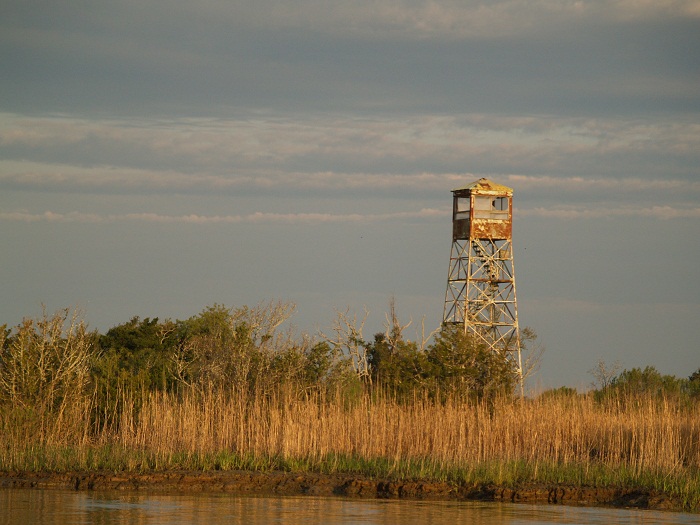 We also passed a floating bridge in the canal.  It was quite interesting as the “barge/bridge” was just the right length to fit between the two landings on each side of the canal.  The barge appears to be fixed at one end to a piling on shore and pivots with a large rotating “outboard” that moves the other end of the barge into position on the opposite shore.  Once in position, ramps are lowered on each end of the barge and vehicles can cross. 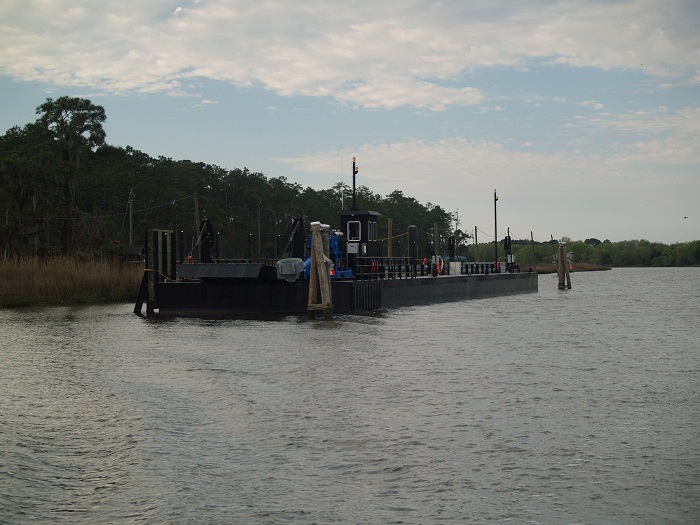 It’s an ingenious piece of equipment.  Note the “outboard” on the end of the barge.  I think it’s run by hydraulics from a large stationary diesel engine on deck.   I guess it’s pretty heavily used by vehicles in the rice fields as there were plenty of pickup trucks parked on both sides of the canal. 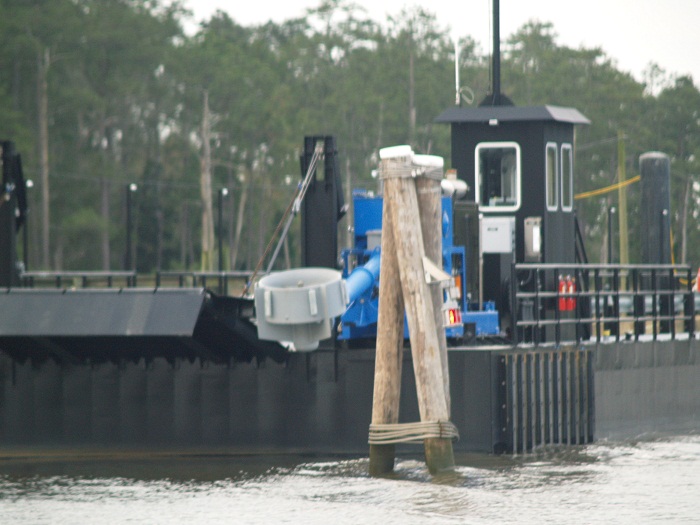 So, back to Georgetown.

We walked the mile or so out to the Piggly Wiggly grocery for some fresh food and were struck by how different the food that they stocked were there verses what we are used to in CT.  The produce section was very small and was dwarfed by the baked goods, mostly cakes and pies.  “Forget the apples, I’ll have a case of Little Debbie danish.” Oh yeah, and lots of fried pork rinds too, it seems. There was also a huge variety of grits to choose from.  The meat cases were loaded with all sorts of smoked items, mostly unrecognizable but these were labeled as “smoked pork necks”.  Yum… 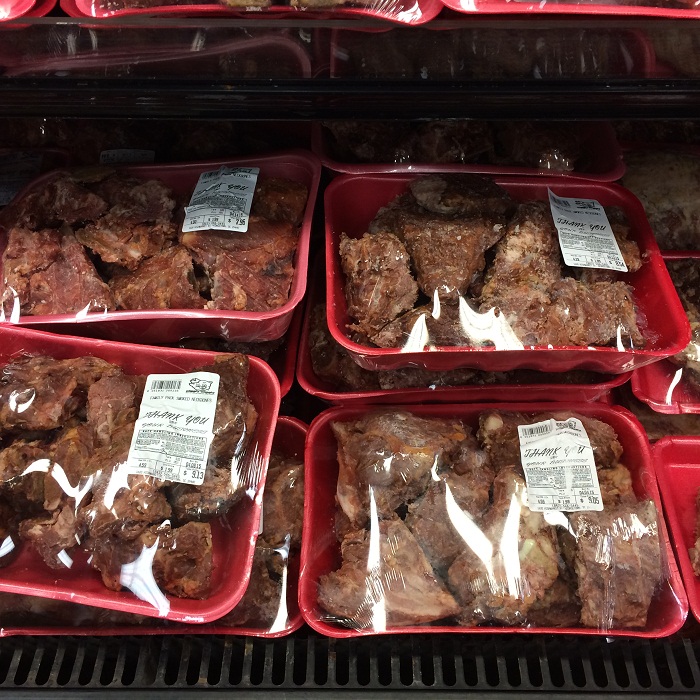 There was also piles of “meat by-product” looking stuff labeled as “sousa” and “blood pudding” in the meat section.  They were thick slices of what looked like a soft and lumpy bologona.   I expect that you DO NOT WANT TO KNOW what’s in it.  However, it’s not expensive.

Setting aside the grocery experience, the town is really quaint.  This old building houses the local “Rice Museum”, which we are going to check out today. 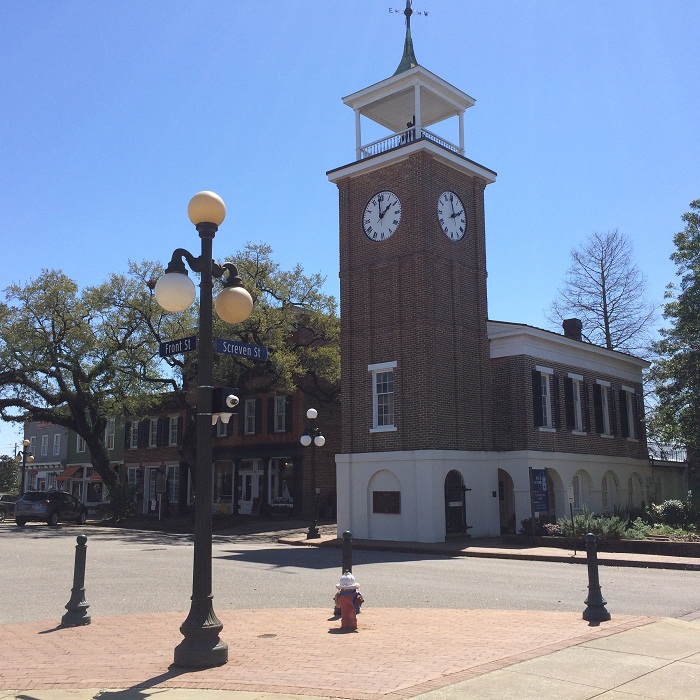 There is also a really nice little nautical museum.  They had some really well done models. I particularly liked this river boat. 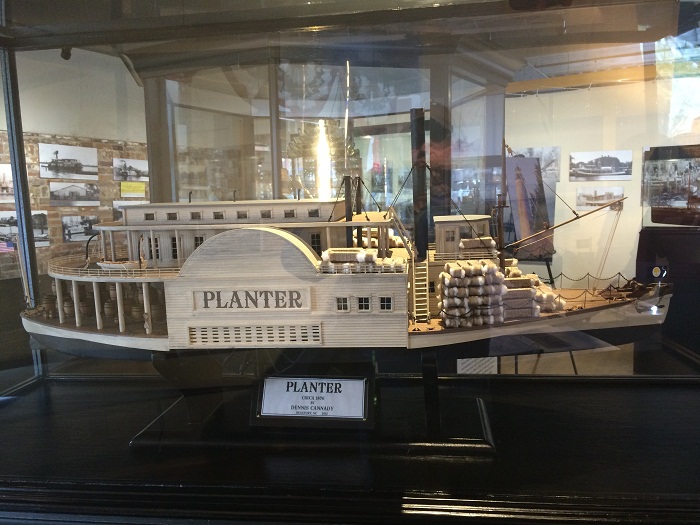 We also went out for lunch at a riverfront cafe.  There was a spectacular and huge, salt water aquarium.  It was clearly a very well cared for tank.  Notice the soft corals.  I expect that they aren’t feeding them smoked pork necks. 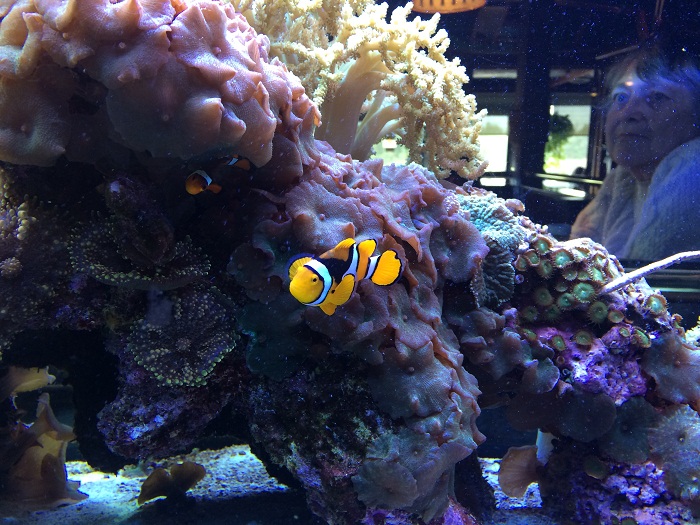 We went for a walk down a few of the nicest streets, lined with beautiful live oaks. 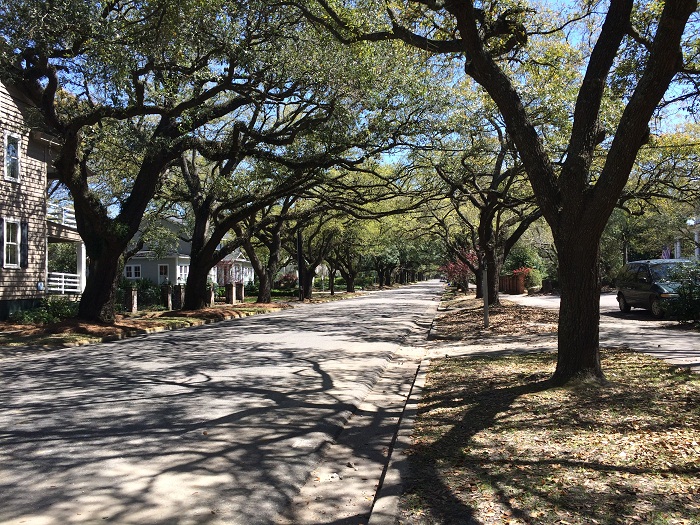 We particularly admired this beautiful home, two hundred years old this year.  It turns out it was for sale and we were invited in for a tour.   “Hi, want to take a look inside?”  Sure… 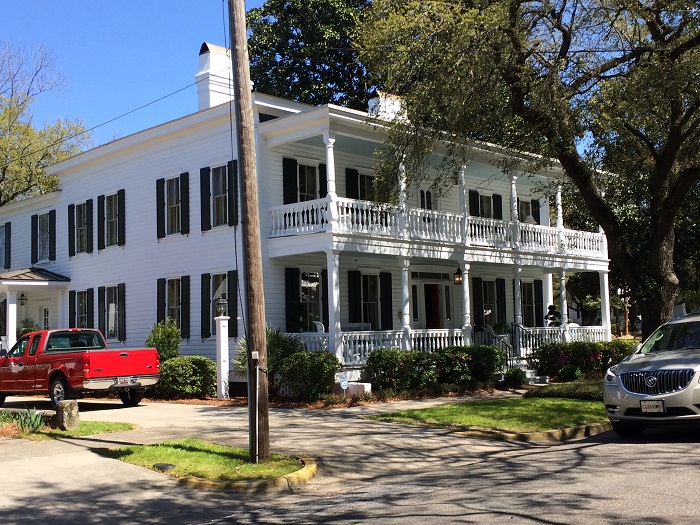 Each room was more beautiful than the last.  The place was absolutely packed with antiques. 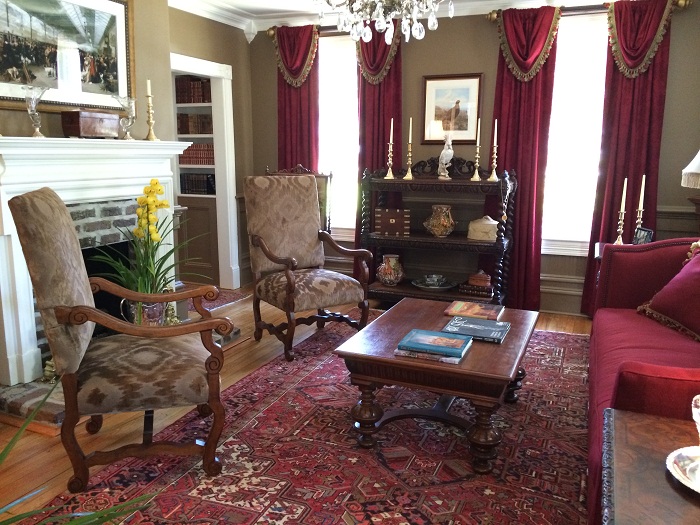 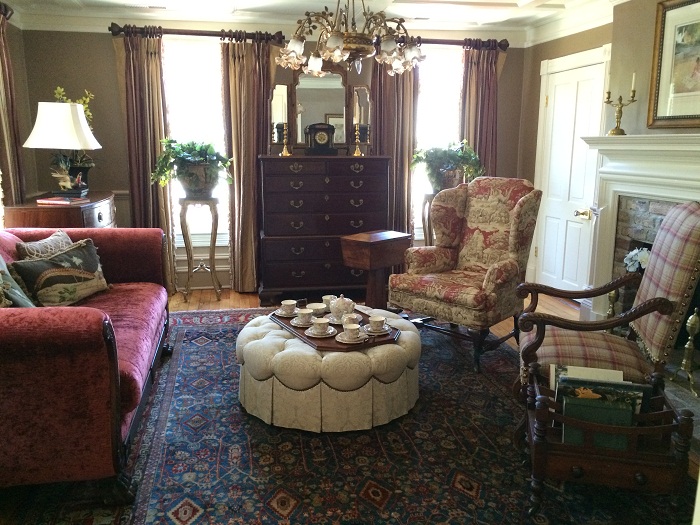 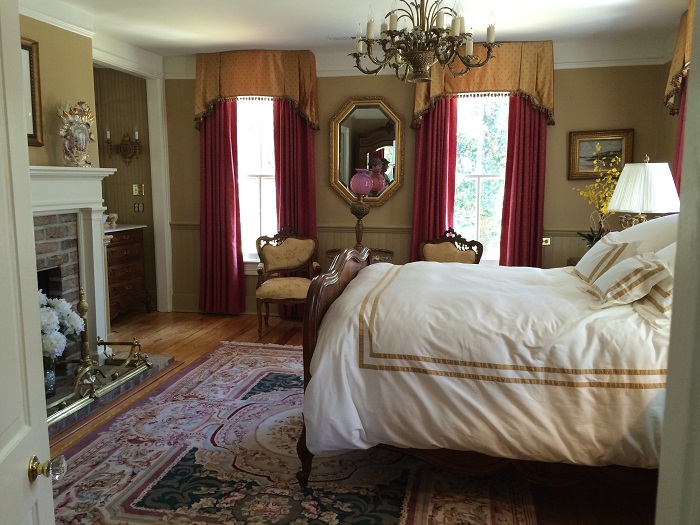 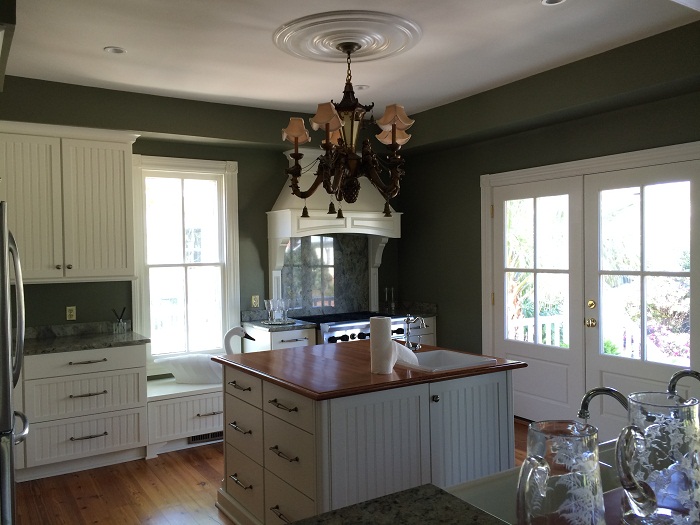 The place looked like it had just been renovated, and it was, in preparation for sale.  The asking price, $1.5m, complete with all furnishings and they’d even throw in a brand new Land Rover.   I can’t even imagine what this house would be worth in Essex.

I suspect that this is a very full price for this area but the antiques along must be worth a good deal.  Supposedly, the owner buys homes, fixes them up and sells them.  I guess he must have some sort of antique business to fill them with so much stuff.  “I’ll take it but you’ll have to knock off $10,000 as I just can’t live with that sideboard in the sitting room.”

As we make our way up the ICW we often see boats that we have seen before. This lovely little trawler has been stopping at some of the same places as we have since central Florida and we keep seeing them along the way.  It’s very well kept and has really sweet lines. 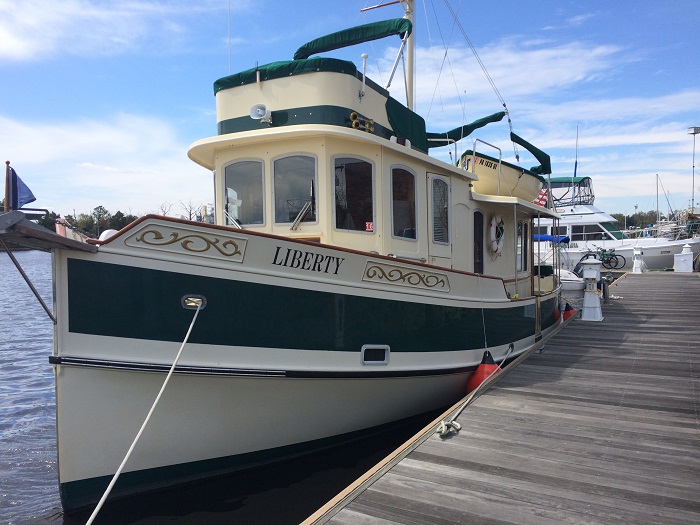 All and all, we really like Georgetown however, time marches on so I guess we will have to head out tomorrow.  We have to be in New Bern on the 11th and still have over 200 miles to go.

The next few weeks are going to be very busy as we unpack Pandora and get her ready for sale.  I’ll bet that we’ll find things in lockers that we have long forgotten.

And, I won’t even talk about the logistics of renting cars, storage units, going to wedding in Columbia SC, arranging for hotels, a flight home for Brenda and closing on a new boat.  Yikes!!!  As Scarlett O’Hara, sort of, once said “I won’t think about that today, I’ll think about (logistics) tomorrow.”

Speaking of plantations and the old south, perhaps we’ll have to visit the rice museum.   Yes, that sounds good.  Well, we’d better get going.