GOMEX, been there and back.

It’s Tuesday morning and we are back in Marathon and, believe it or not, we’re finally on a city mooring.  When we arrived here about 10 days ago, we were 32 on the waiting list and spent about a week anchored and tied to trees in the mangroves.  It was plenty buggy but quite scenic.   “Look Brenda (slap) at that pelican (slap).  No wait, see that fish (slap) jumping?”

So, a few days ago we decided that we’d had enough of “mangrove Marathon” and sailed 30 miles north to the southern tip of the Everglades.  The run north took us under the center span of the seven mile bridge, part of route 1 that connects Miami with Key West.

Recall that this highway, railroad actually, was originally built by Henry Flagler as a rail link to Key West from Miami and opened in 1912.  It didn’t last long as sections of it were wiped out by a hurricane not too many years later.  A highway was built along side of the then closed railway and now serves as the only road in and out of the keys.

You can see that the modern road runs right next to the railroad bridge and power lines.   Once we crossed under the bridge, we crossed from the Atlantic Side to the Gulf of Mexico (GOMEX).  Pretty neat.  Now I can say that I have “done GOMEX”.  Have you? 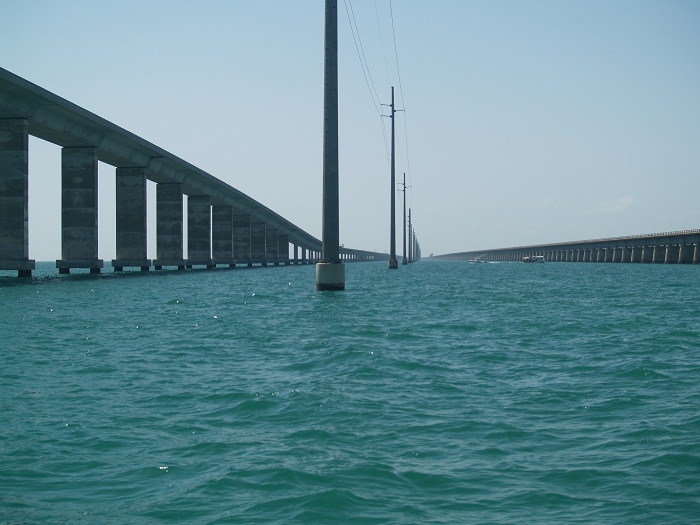 It’s impressive to see how good the Flagler sections still look after 100 years.   Some sections have been converted into fishing piers but many parts are just sitting there crumbling after years of neglect. 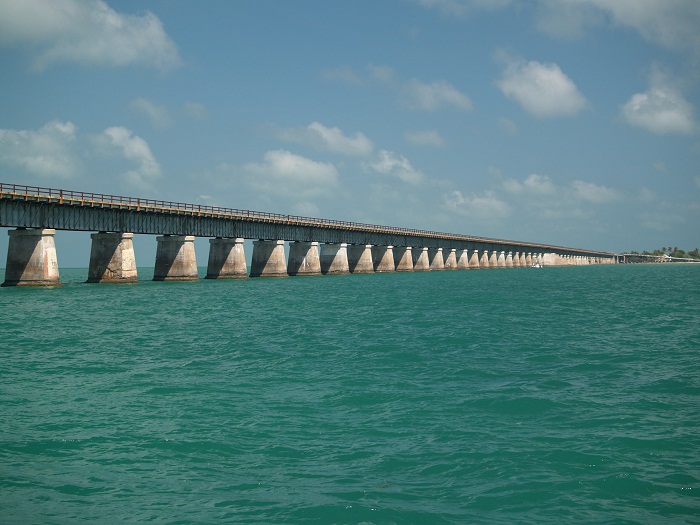 There are plenty of seabirds in residence like this pelican that was perched on a piling of the bridge as we passed through the bridge.  Well, he was perched a moment ago. 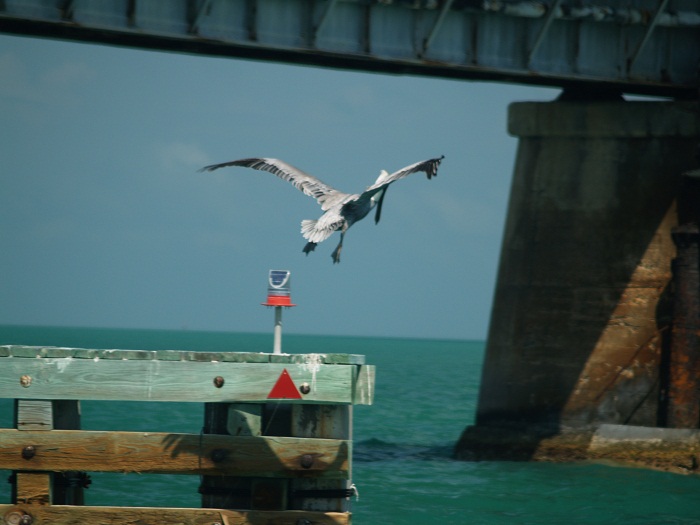 We had a really nice sail for the nearly 30 miles between the bridge and our anchorage for the night.  The clouds in the distance were beautiful. 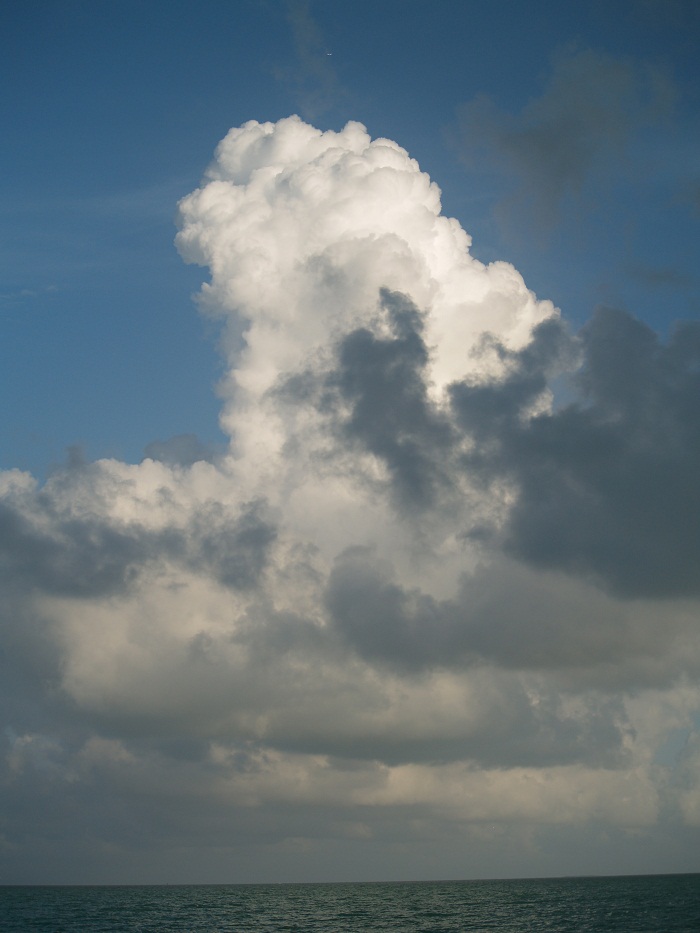 I tried my hand at a panorama but it was tough holding the camera steady enough from a moving boat.  Note the wavy horizon.  An amazingly dramatic view with no land in sight in any direction.

The water was extremely shallow as we crossed through this part of the Gulf of Mexico and I never saw depths that were greater than about 18 feet.  It is pretty unusual to be 12 miles from shore and see water depths in the single digits but that’s what the Keys are all about.  Really, really shallow.    And, oddly, as we got closer to the shore in the Everglades, the water was very murky with less than a foot of visibility.   Not my first choice.  In fact, the water in the keys is not nearly as clear as the Bahamas that is known as having some of the clearest waters in the world.

When we arrived at our destination we had to anchor about a half mile from shore as it was so shallow near the beach.    Actually, as we rounded the point on our final approach, we ran aground under full sail in water that should have been plenty deep.  We were sailing at about 6.5 knots and came to a sudden and complete stop on a sand bank.  It was a very soft landing so no harm done except to my ego.  Fortunately, there was plenty of wind to heel us over , reduce our draft and allow me to back us off with the engine.  Oops.

Anyway, after that little delay, we worked our way a bit further and anchored about a half mile off from the beach, which made us feel like we were pretty exposed.   By the time we got settled it was just in time to watch a beautiful sunset.   Alas, no “green flash” but impressive never the less. 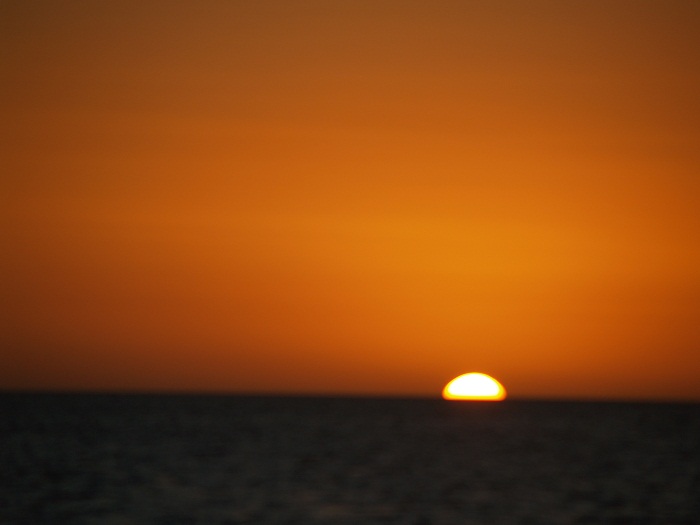 The next morning we headed to the beach.  The cruising guide said that this was a very good shelling beach and “they weren’t lying” but also cautioned about keeping pets away from alligators that frequent the area.  As you can imagine, this put Brenda off of her game pretty well.  However, the opportunity to shells overwhelmed her fear of being eaten alive by a huge lizard so off-a-shelling we went.    It was great, the shelling, not the alligators, and after an hour or so of picking our way along the shore the next morning we collected about 100 shells, including some types that we had never seen anywhere else.  What a haul. 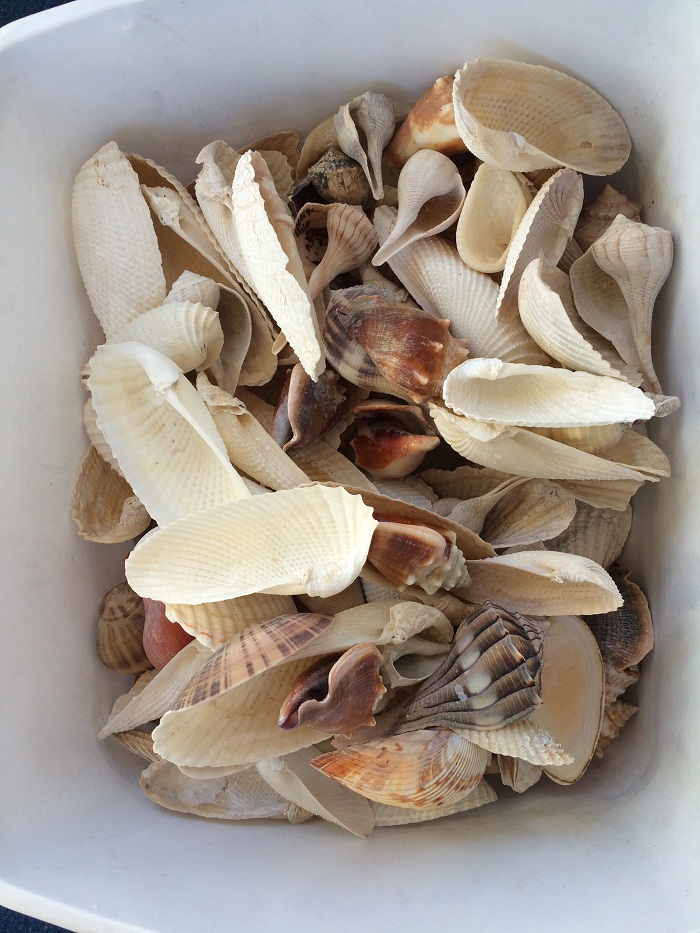 It was a very remote area and clearly there are very few visitors as the number of shells would suggest.

Oh yeah, not an alligator to be had.

Anyway, here we are back in Marathon and on our mooring just in time to enjoy a beautiful sunset.   And now, I can cross GOMEX off of my “bucket list”, even if I don’t have one.  GOMEX, check. 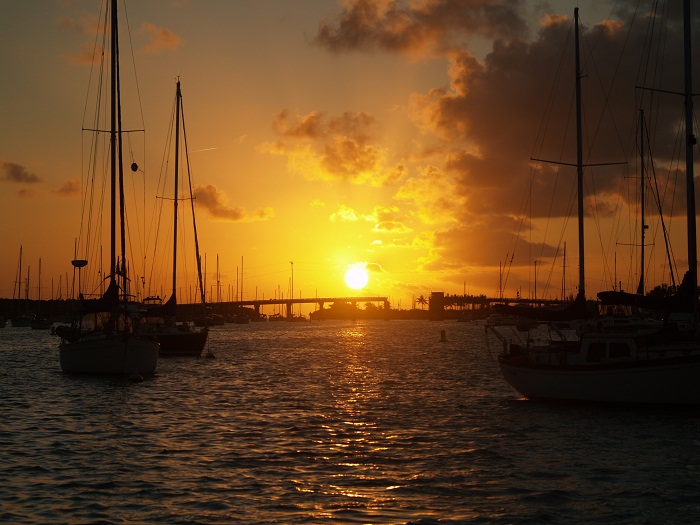 Today, if I ever finish this post, we are off to a “turtle hospital”, a spot where injured sea turtles are nursed back to health and returned to the ocean.  That should be fun.  I LOVE TURTLES!