>With all my weekends consumed with work on Pandora over the last few months, Brenda and I decided to take a vacation to Martha’s Vineyard, to stay at a friend’s home.  As if that’s not great enough, both of our sons came and brought their significant others.   Our oldest Rob has his birthday, Chris, you youngest (I guess that’s self evident as Rob is the oldest) has his 35th birthday today, April 9th.  How is it that he’s so old and I am so young?   Lauren, Rob’s wife, also has an April birthday so we were all set to celebrate.  We’ve been to MV many times over the years, in every boat that we’ve owned, beginning in the late 70s in TAO, our 20′ Cape Cod catboat and in more recent years in Pandora.


Coming over on the ferry the other day was a very new experience for us as we’d always visited on our own boat. It’s certainly a lot less weather dependent aboard the ferry.


While it was plenty cold, I went out on deck to watch the sights go by.  Oddly, I was the only one that wasn’t inside where it was nice and toasty.  Perhaps it was the 20kt winds and temperatures in the 40s.  Hmm…


A nice crisp afternoon in April.  That’s Naushon Island in the background as we are leaving Woods Hole. 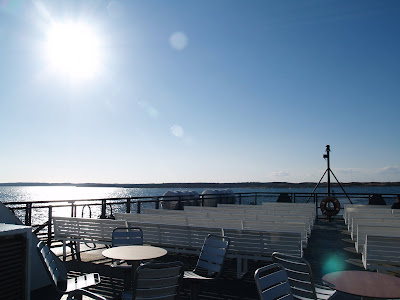 Just outside the inner harbor is a really nice little draw bridge.  It’s been replaced in the last few years as the old one tended to stick in the closed position when the pavement got really hot in the Summer.   This one is so  over built compared to the old one,  I’ll bet that it will function well for many decades. 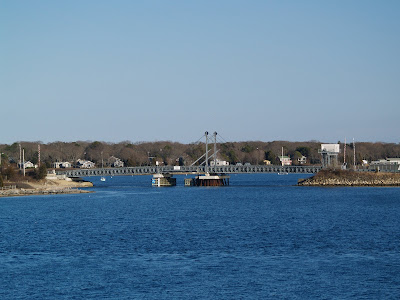 This shot, taken outside of the breakwater, and heavily exposed to the northerly prevailing winds of winter, was a lone sailboat on a mooring, complete with dink tied off of the stern.  Obviously, a liveaboard I would say.  It’s hard to imagine living aboard in such an exposed place over the winter.  I can only imagine how rough it gets, not to mention cold, when the wind pipes up.  It must be even more fun getting to and from shore in that little dink. 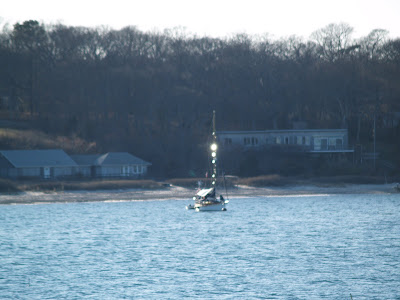 Inside the breakwater it was a lot calmer and there were many more boats sitting on their winter moorings.   There are a good number of wooden boats that call their home Vineyard Haven harbor and the best place for a wooden boat to spend the winter is afloat.  This harbor is a particularly good home for wooden boats because of the yard Gannon & Benjamin, a well respected wooden boat yard right on the waterfront in Vineyard Haven.   There’s a great book about the yard that’s well worth reading, Wooden Boats: In Pursuit of the Perfect Craft at an American Boatyard.  It’s the story of a classic boat and her rebuilding at the yard.


Among the many boats launched at G&B over the years is this lovely catboat, the only craft sailing the waters when we arrived. 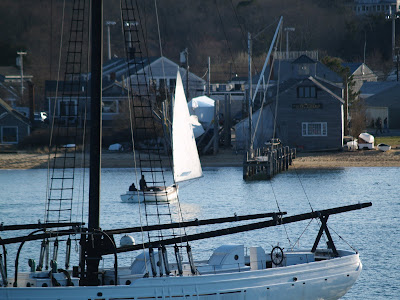 In front of the catboat is one of the two schooners owned by the founder of the Black Dog, a very successful business started back in the 70s here on the island.  He started the business back in 1971 as a bar but has expanded to include a bakery, two schooners for day trips as well as a store with a Black Dog line of apparel.  While the store in Vineyard Haven was the first, they have expanded and now have local operations in most major New England ports.  They even have a webcam where you can see live photos of the harbor.

It’s a real treat to be here with our family and it’s likely to be a long time until we are all away together again.  A particular goal that we have is to have them visit us when we are in the Bahamas or Caribbean.  Something to look forward to but that’s a topic for a future post.